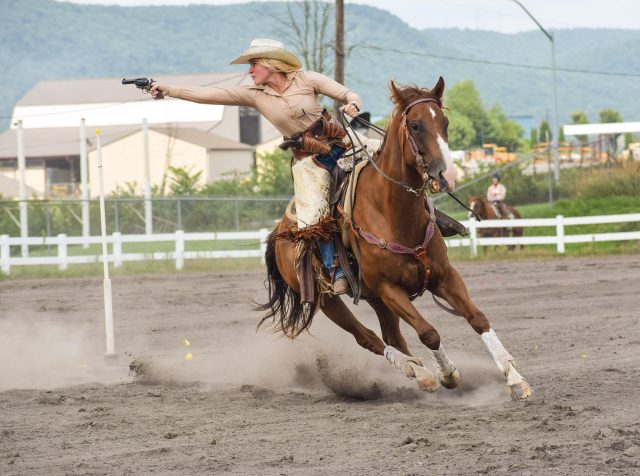 I’m not sure if there’s anything that makes me happier than seeing that all three of my horses are going to be successful.

Sometimes it gets hectic managing three horses. Who am I kidding? Most of the time it’s hectic and I’m not sure which direction to go, or which horse to work. There is one thing I’m certain about — I love mounted shooting and I head that direction at least once a week!

One day a week, I load up and head to Penley Horsemanship. These weekly trips have made me and Buns significantly more successful in the show pen. So why limit just one of my three horses to all the success? Now, all my horses are reaping the benefits of Penley Horsemanship.

It’s a given that Buns goes with me every week. He’s my seasoned shooting horse and we can benefit from all the training we can get. Each week we run different patterns. First the pattern is explained to us in depth and we discuss the most efficient way to run it. Then after each practice run we get feedback. 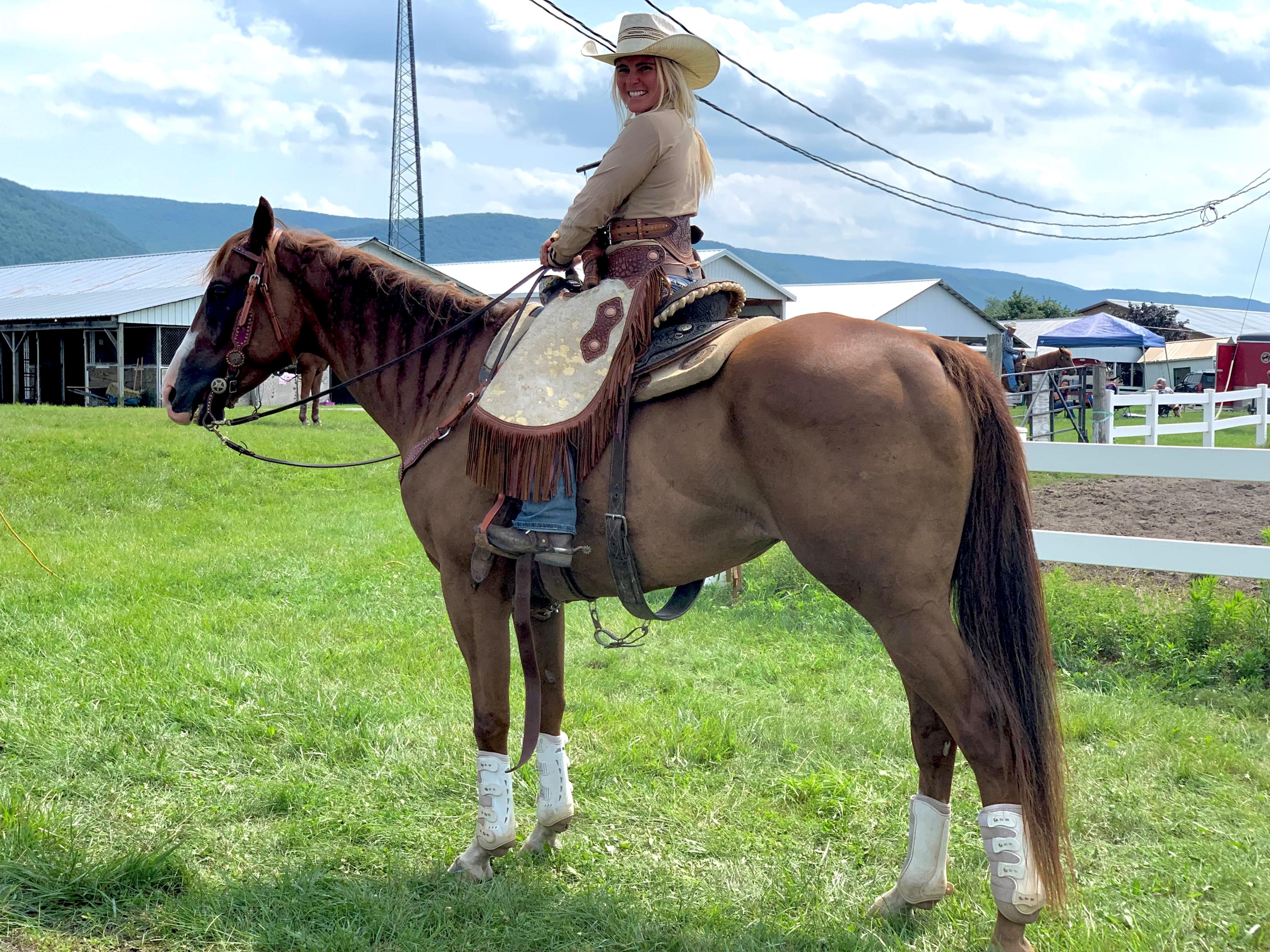 Track the balloons, I shot early, I shot late, I cued early, I cued late, I didn’t cue at all, Buns blew off my cue, I was too forward, Buns was on his shoulder, our lines were sloppy, arm straight and more. Jared gives extremely detailed explanations of each run he critiques. Buns an I have become so consistent and smooth in most of our runs that we’re one qualified win away from moving from a level 3 to a level 4. Fingers crossed that huge milestone happens soon! 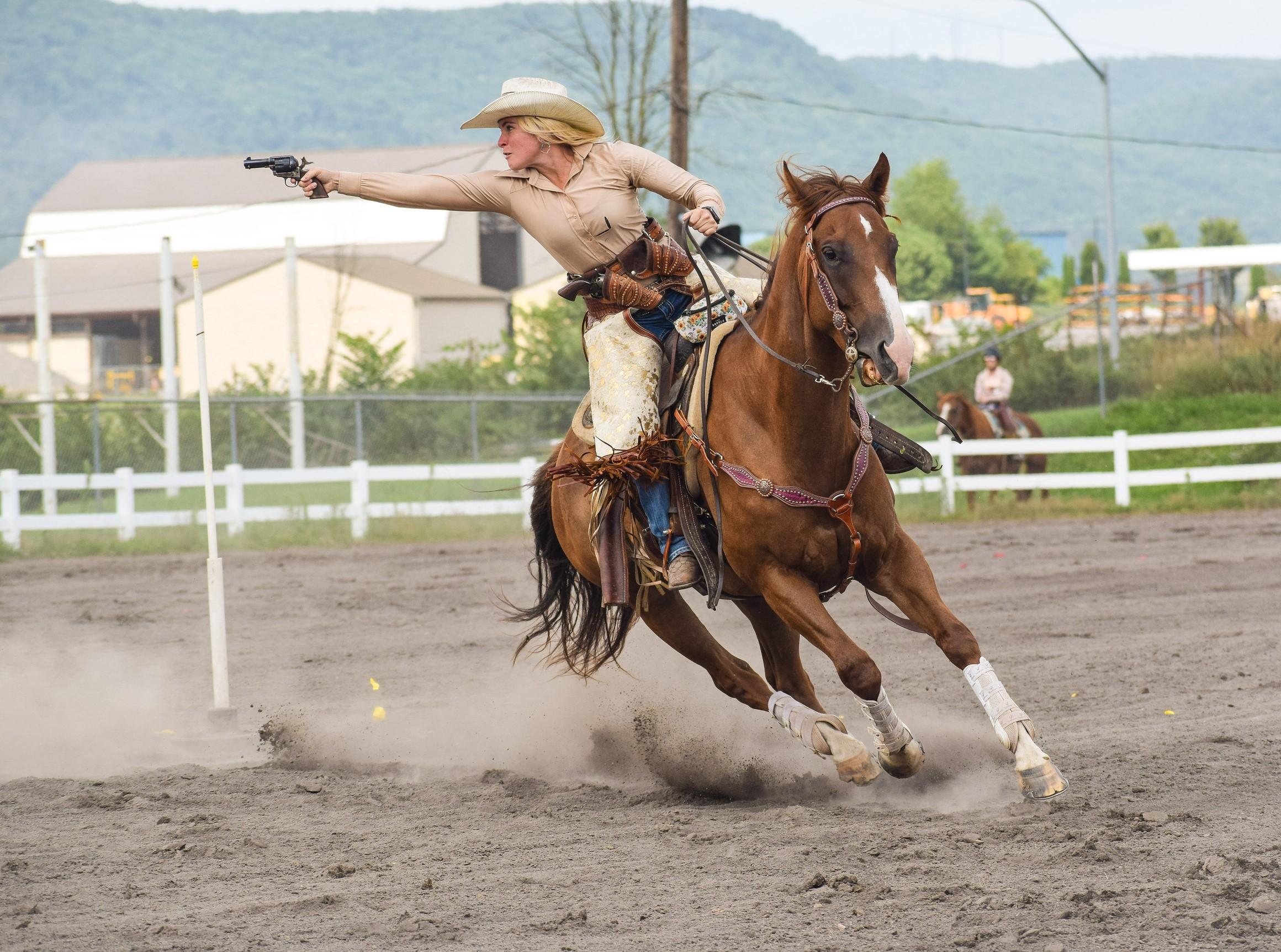 Payco, my three-year-old Quarter Horse has large shoes to fill when he steps into the shooting competition world next year as a four-year-old. The goal for him is to start competing at the beginning of his four-year-old year and compete at the four-year-old futurity in September in Murfreesboro, Tennessee.

In my greatest attempt to meet this goal, Payco is in full time training with Penley Horsemanship for most of his three-year-old year. While there, he’ll be educated and trained to be successful inside and outside of the mounted shooting ring. He’ll learn to have exceptional ground manners, proper cueing for riding and be broke to the gunfire.

When I first dropped Payco off for training, I often called him Houdini. He was so herd sour that he’d wiggle out of his halters and make a break for pasture where his buddies were. I could turn around for one moment and by the time I turned back around, all I saw was an empty halter still in the cross ties. At the time those moment were frustrating, but at this point I can look back and laugh.

Every week while I’m taking my lesson with Buns, I get a progress report on how Payco is doing in training and some days I get to watch his progress. This past weekly lesson I was pleasantly surprised to see Payco not only respecting being tied but, he now ground ties! He’s really evolving into a nice horse, making me excited for his four-year-old year.

Hot Sauce, my yearling Quarter Horse, has not ventured off of the farm and I thought it was a good time to change that. Every couple weeks since she was a weanling we have been practicing loading onto the trailer. Despite all the practice I was quite nervous that she would refuse to get on the trailer to come home after the long ride. I was also extremely anxious that she wouldn’t trailer well. To my surprise, she jumped right on the trailer to and from Penley Horsemanship and acted like a veteran the entire ride.

Once we got to Penley Horsemanship, she waited to be unloaded and I placed her in a small corral in the arena we were practicing in. Worse than my trailering fears was the fear that Hot Sauce would not take to the gunfire and go berserk at the sound.

To say I was happy with the results of her first trip off the farm is an under statement. From the first round fired to the last, Hot Sauce was not phased by the noise or excitement of mounted shooting. I was ecstatic with how well she handled her first trip, especially with the excitement of firing .45 long colts around her.

@mgruc01Yeah my run was cool but look at my yearling in the background not caring AT ALL!! ##yearling ##horse ##horses ##horsesoftiktok ##mountedshooting ##gunfire

♬ Legends Are Made – Sam Tinnesz

It’s a really great day when all three of your horses get worked and they’re all proving themselves to be successful mounts. I’m not sure there’s too much that makes me happier than that. Being able to see the progress all three of my horses are making while at Penley Horsemanship reinforces that we’re in the right place doing all the right things.