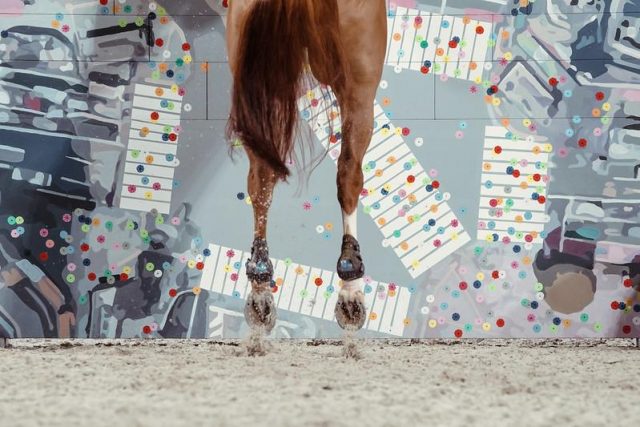 All eyes are on Tokyo as the countdown begins to tomorrow’s Jumping Team Final. Team Sweden led the way in the qualifier, with Team Belgium and Team Germany close behind. Team USA earned a green light as well … stay tuned!

This report was compiled from US Equestrian and FEI press releases. 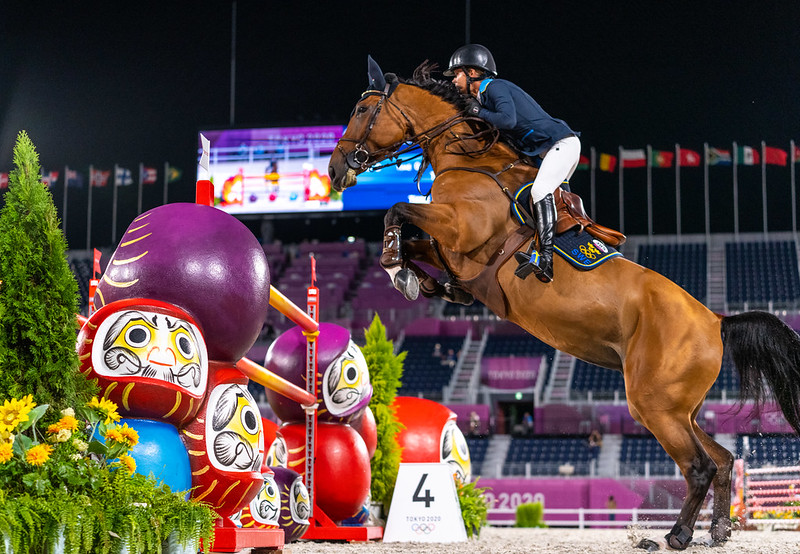 It was a tough day at the office for many of the nations competing in the Team Jumping Qualifier at the Tokyo 2020 Olympic Games in Baji Koen Equestrian Park today. But for Team Sweden it was just another walk in the park.

Since the action began on the first day of the Individual competition last Tuesday, Henrik von Eckermann’s King Edward, Malin Baryard-Johnsson’s Indiana and Peder Fredricson’s All In have not lowered a single pole.

It will be a whole new competition when the action resumes in tomorrow’s Team Final where the top-10 teams from tonight’s qualifier will battle it out once again, all starting on a zero score. But the Swedes look super-confident ahead of that showdown in which they will be challenged by Belgium, Germany, Switzerland, USA, France, Great Britain, Brazil and The Netherlands. 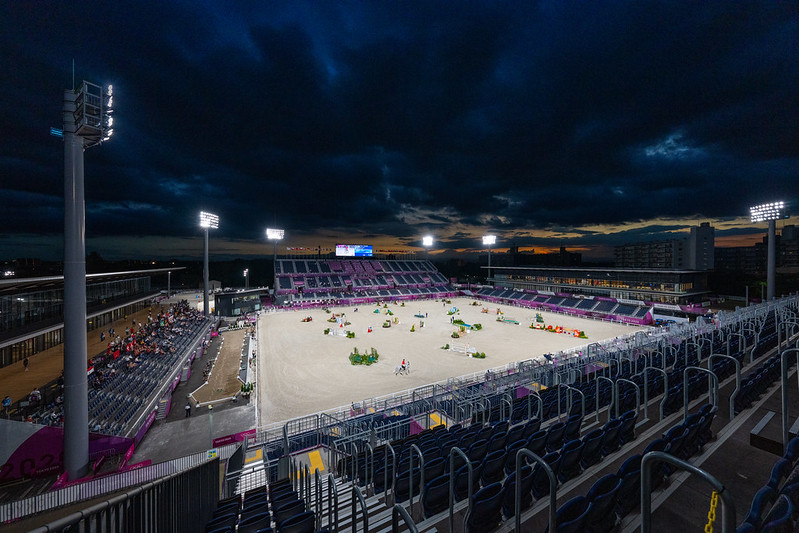 A number of countries made a dramatic exit, including Japan. Daisuke Fukushima and Chanyon, who finished Individually sixth, picked up eight faults when first to go for the host nation, but when Koki Saito and Chilensky were withdrawn that dashed their chances.

Then Irish pathfinder Shane Sweetnam and Alejandro fell at the water-tray vertical at fence 10. The grey gelding had been jumping erratically after paddling the first element of the triple combination at fence five. They left the arena unscathed, but Sweetnam was devastated for his team and for the horse who is normally so reliable.

“He’s an experienced horse, normally he’s very good but he pulled his shoe off going into the triple combination, I don’t know whether that hurt him but it definitely rattled him, and then after that you could see he was very unsettled and wasn’t like himself at all”, said the man who has long been a rock for the Irish side. But his team’s chances of a place in the Final were gone.

When the second rotation of riders got underway Israel’s Teddy Vlock took a fall at the previous liverpool oxer. His 11-year-old mare had already refused at the second fence and had two fences down along the way. Vlock was examined by medics after walking out of the arena and was cleared to go back to his hotel, but knowing that his country was now also out of the medal race. 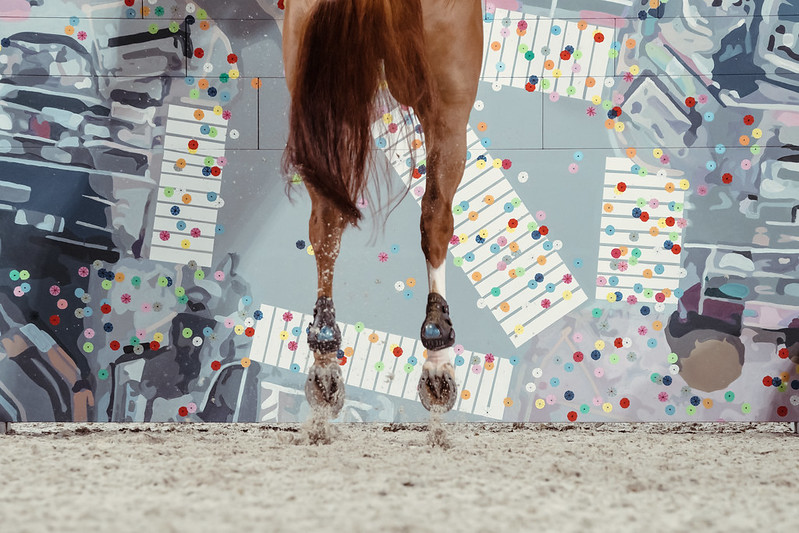 At the other end of the spectrum the Swedes were just waltzing home with effortless ease. “Our horses have been unbelievable!”, said Baryard-Johnsson. “I think we all have the same feeling that it felt quite easy every round in there – they are all jumping so well, every round!”

The Belgians and Germans also looked very comfortable, both completing with just four faults on the board all made up of time penalties. Gregory Wathelet was last to go for Belgium with Nevados S and felt he was in a comfort zone because his compatriots Pieter Devos with Claire Z and Jerome Guery with Quel Homme de Hus had only collected a single time penalty each. He added two more but didn’t feel under any pressure.

“I just had to go and see how my horse was feeling after the Individual Final because we all know tomorrow will be bigger like the (Individual) Final. It feels like he is fresh so I’m happy about that”, said the rider who finished ninth on Wednesday night.

Germany’s Maurice Tebbel and Don Diarado also picked up two time faults to add to the single faults collected by team-mates Andre Thieme with DSP Chakaria and Daniel Deusser with Killer Queen. Thieme had an interesting time in the arena and said afterwards, “I won’t win the prize for the most stylish round!”, but he was really proud of his 11-year-old mare. 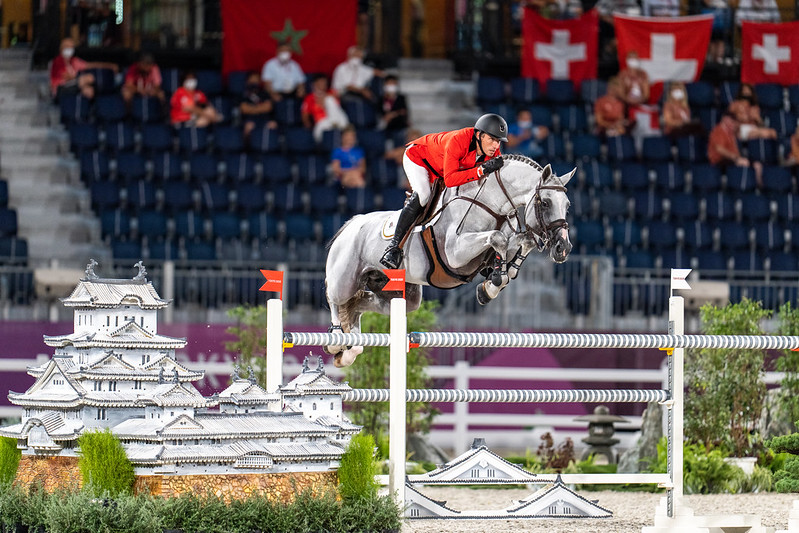 “She is a superstar and I’m not the only one thinking that. She is complete!”, he said. But that venue, those lights and jumps it’s maybe a bit early and too impressive for her because she’s young and green. But on the other hand if she goes through this she will learn something and everywhere else in the world it will be easy for her. I’m totally in love with this horse! She belongs to the family and she’s so special!”, he added.

Switzerland finished with 10 on the board, the USA with 13, the defending champions from France with 15, and Great Britain racked up 17. The final three teams to make the cut were Brazil who collected 25 faults, The Netherlands who picked up 26 and Argentina who finished with 27 and squeezed Egypt out of the top 10.

Also on the sidelines as the Final plays itself out tomorrow night will be the teams from China, Morocco, New Zealand, Czech Republic and Mexico. 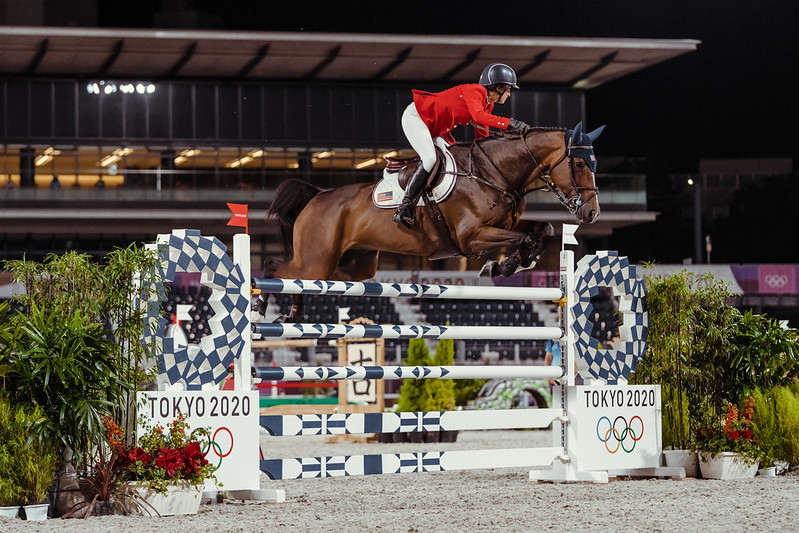 The U.S. Jumping Team has qualified for the Jumping Team Final to be held on Saturday, August 7, beginning at 7:00 p.m. JST/ 6:00 a.m. EDT at Equestrian Park in Tokyo, Japan. The team finished the Team Qualifier competition in fifth place, earning their spot in tomorrow night’s final, with the top ten teams advancing.They will begin tomorrow night on a clean-slate score of zero, as the scores from this evening’s qualifier do not carry over to the team final.

Laura Kraut and Baloutinue led the team as the first combination to test the Santiago Varela (ESP) track and finished with four faults in a time of 80.78 seconds. Jessica Springsteen and Don Juan van de Donkhoeve secured another strong ride for the team, crossing through the timers in 80.67 seconds with only four faults. The anchor combination of McLain Ward and Contagious ensured the team would return for the second round of competition, finishing in 83.03 seconds with four faults and a single time fault. The new format saw a range of scores from the participating teams, ultimately with the U.S. finishing in the top five of 19 teams who contested the course.

Kraut (Royal Palm Beach, Fla.) and Baloutinue, an 11-year-old Hanoverian gelding owned by St. Bride’s Farm, needed to provide a strong foundation for the rest of the team to build on and the duo did just that. The track suited Baloutinue’s style and allowed the pair to position the team off with a strong start, only adding four faults to their score.

“He jumped beautifully. I had said when I walked the course that I thought it could be the bogie jump of the night and I myself probably could have gotten him six inches closer to it, and if I could do it again that’s what I’d do, but other than that he didn’t touch a jump and he did everything I asked of him, so I’m really happy,” said Kraut. “The objective today is to get in tomorrow and pull out all of the stops then.”

In her Olympic debut for the U.S. Jumping Team, Springsteen (Colts Neck, N.J.) and Don Juan van de Donkhoeve, a 12-year-old Belgian Warmblood stallion owned by Stone Hill Farm, looked sharp and competitive. The pair, who just barely missed qualification for the Individual Final earlier in the week, made sure to make the most of their time in the arena at Equestrian Park and secured a second solid effort for the team.

“I thought my horse jumped beautifully. I was thinking for the time allowed a little bit and I just needed to regroup before that last line, but I’m thrilled with the way he’s jumping,” said Springsteen. “I had a lot more nerves today as opposed to the first day. I want to make everyone at home proud and have a good performance for my teammates and I think we’re sitting in a good spot heading into tomorrow.” 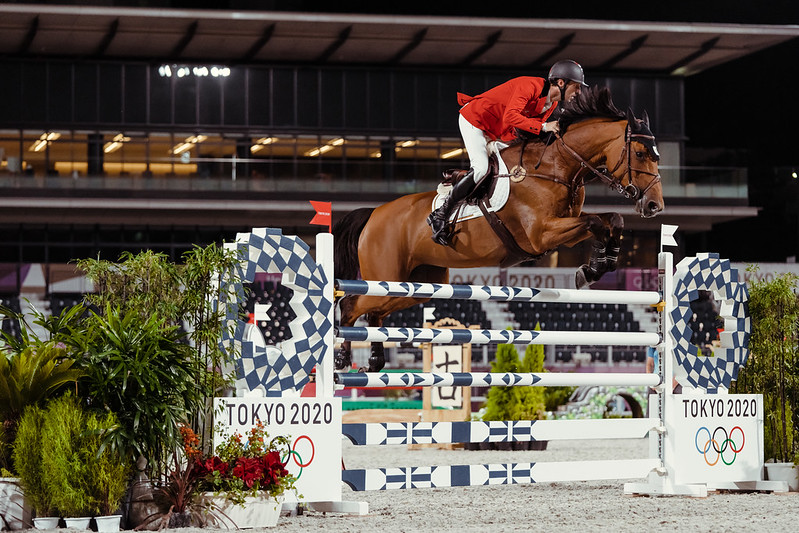 Familiar with the pressure of being the anchor rider for the team, Ward (Brewster, N.Y.) and Contagious, a 12-year-old Deutches Sportpferd gelding owned by Beechwood Stables LLC, were impressive in their competition debut after being subbed in specifically for the team competition. With the new format, Ward and Contagious delivered, ultimately helping to punch the team’s ticket to tomorrow’s highly contested team final.

“My horse felt great. This was a new challenge for Contagious and me. We’ve been on the ice for the better part of four weeks and his last show was Rotterdam, which was over a month ago. Over the last ten days I think I’ve maybe jumped eight or nine jumps and to jump at this level is a real challenge,” said Ward. “He was right there with me and I’m proud of Contagious for stepping up. When I originally got the ride on him, I didn’t know if he was an Olympic horse, and he has proved that he’s capable at this level.”

The team is primed and ready for what will be an intense battle for team medals tomorrow with several strong teams also vying for positions on the podium. Feeling positive after tonight’s class, Chef d’Equipe Robert Ridland commented on how pleased he is with the way the team’s strategy is playing out.

“The plan is working so far. We went into tonight looking for three solid rounds and we wanted to come in fresh, and also know that this is the first of potentially three rounds, specifically if we are fortunate enough to do well tomorrow and end up in a jump-off. The plan was to not leave too much on the table and I think that’s what happened tonight,” said Ridland. “I thought all three riders rode great and all three horses looked fresh and jumped great. There were three solid rounds and we easily qualified, so we have a good order tomorrow. We’re in good shape and it’s exactly what I was hoping would be the case for us heading into the final day.”

Great Britain was heading the medal table with a total of 5 going into today’s Team Jumping Qualifier – so far they have won 2 in Eventing, 2 in Dressage and 1 in Jumping.

Germany has won four sets of medals to date, 1 in Eventing and 3 in Dressage.