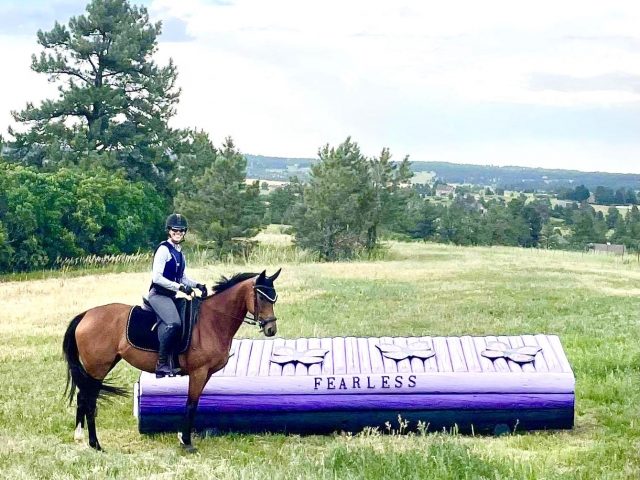 August 5, 2021DeAnn SloanContributorComments Off on Putting the Rubber to the Road: Britany & Kittie

For 480 accepted trainers, the journey to the Retired Racehorse Project‘s 2021 Thoroughbred Makeover and National Symposium, presented by Thoroughbred Charities of America, has begun! Over the next eight months, four of those trainers will blog their journeys, including their triumphs and their heartbreaks, successes and failures, for Horse Nation readers. Today, blogger Britany Chism discusses preparing Kittie during the final two months before the Makeover.

Yesterday, I saw a post in the Thoroughbred Makeover Trainers Facebook group that said, “With about 70 days to the makeover…” and my stomach did a somersault. How could we suddenly have just over two months to finish preparing our horses?!

In my bones, I know it’s not far out — I even submitted our final entry on Sunday where we declare our disciplines. The first was obvious and I selected the Dressage drop-down option. For the second discipline, I hovered over the Freestyle option, then made the mistake of Googling “Thoroughbred Makeover Freestyle Routines” and clicked on the 2019 Finale compilation, where it strings together clips of the top five entries.

Have you seen Amy Bowers’s routine (starts at roughly the 24:15 mark in the link above)? If you haven’t, you’re missing out. She’s from my area and is a fellow Eventer, so I’ve been lucky enough to watch this phenomenal horsewoman work her magic up close. I also follow her on Instagram, and daily I drool over her liberty and Parelli-inspired posts. She’s an inspiration to say the least.

Back to that 2019 Finale compilation…

I found myself glued to the screen for the next 30 minutes, and at the end thought, “How in the world can I compete with that?” Those little gremlins of doubt started creeping in in a big way.

With each passing day, it feels like time is speeding up even more. Just two weeks ago I was even debating if it still made sense to go (hence those gremlins taking a stab at me last night).

Kittie (JC Itybityquikasakity) is four and will be on the younger side of those in the competition. As such, she is developmentally behind many of them, both physically and mentally. She’s still only15 hh, and while she is filling out, she’s doing so at turtle speed. While she is the most mature four-year-old I’ve ever worked with, she’s still four, and has baby moments scattered regularly throughout her moments of brilliance.

We’ve been lucky not to have any major medical setbacks (please ignore what I just wrote, Mr. Murphy [’s Law]), but we’ve felt stuck for the last three months. You’ll recall that cantering was a major challenge for us, and while we could finally do it as of my last post, it’s still not pretty and I even wrote the following on my most recent schooling show entry: “Small chance I’ll need to nix the Intro C, and swap back to Intro A — dependent upon progress in canter work in next month.”

Add to that her work off-property has also been hit or miss. When we’re in an arena setting, be it inside or out, she is wonderful. She goes right to work even if it’s a brand new place, and even if it’s a show setting. 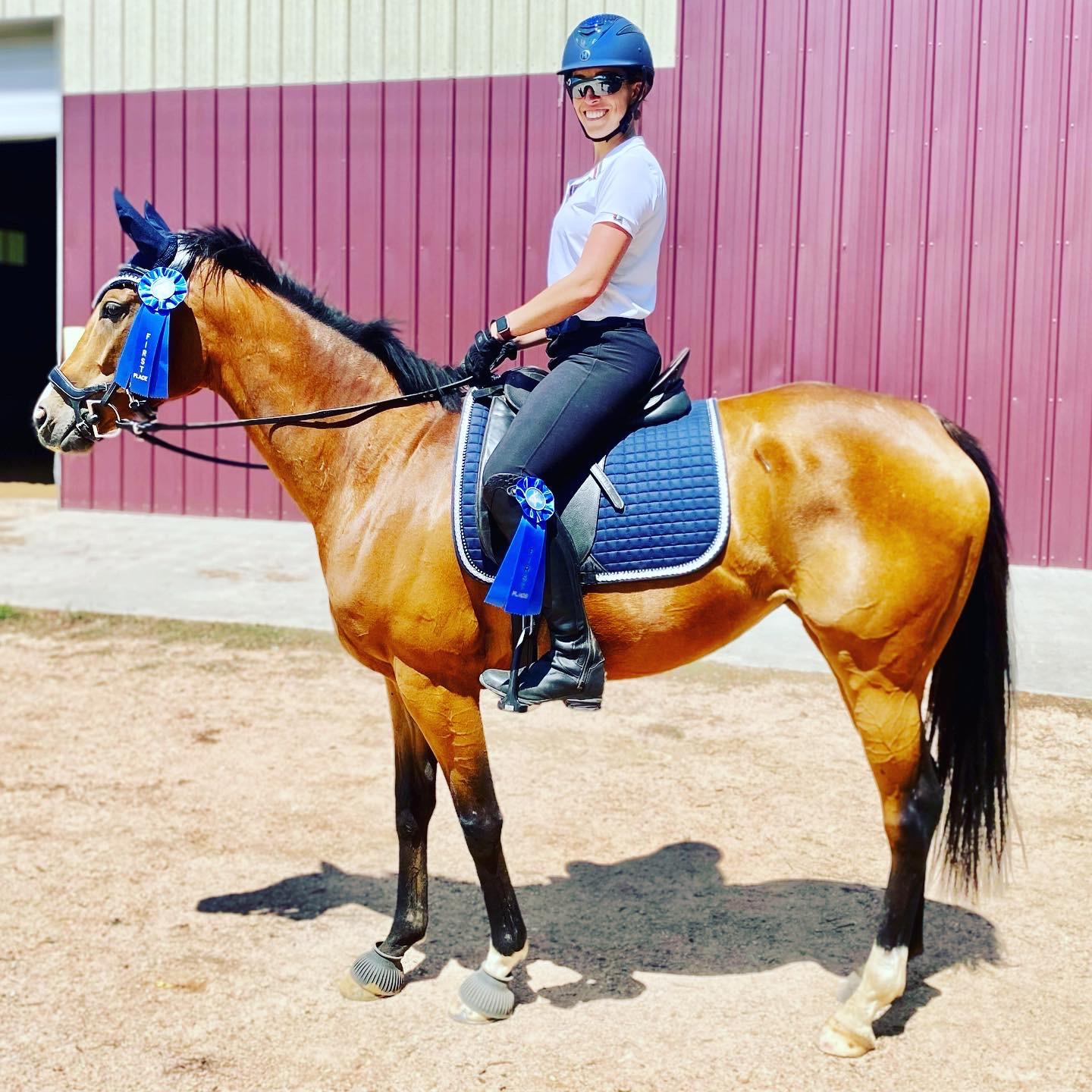 The trouble starts when there are big fields and too much to look at. 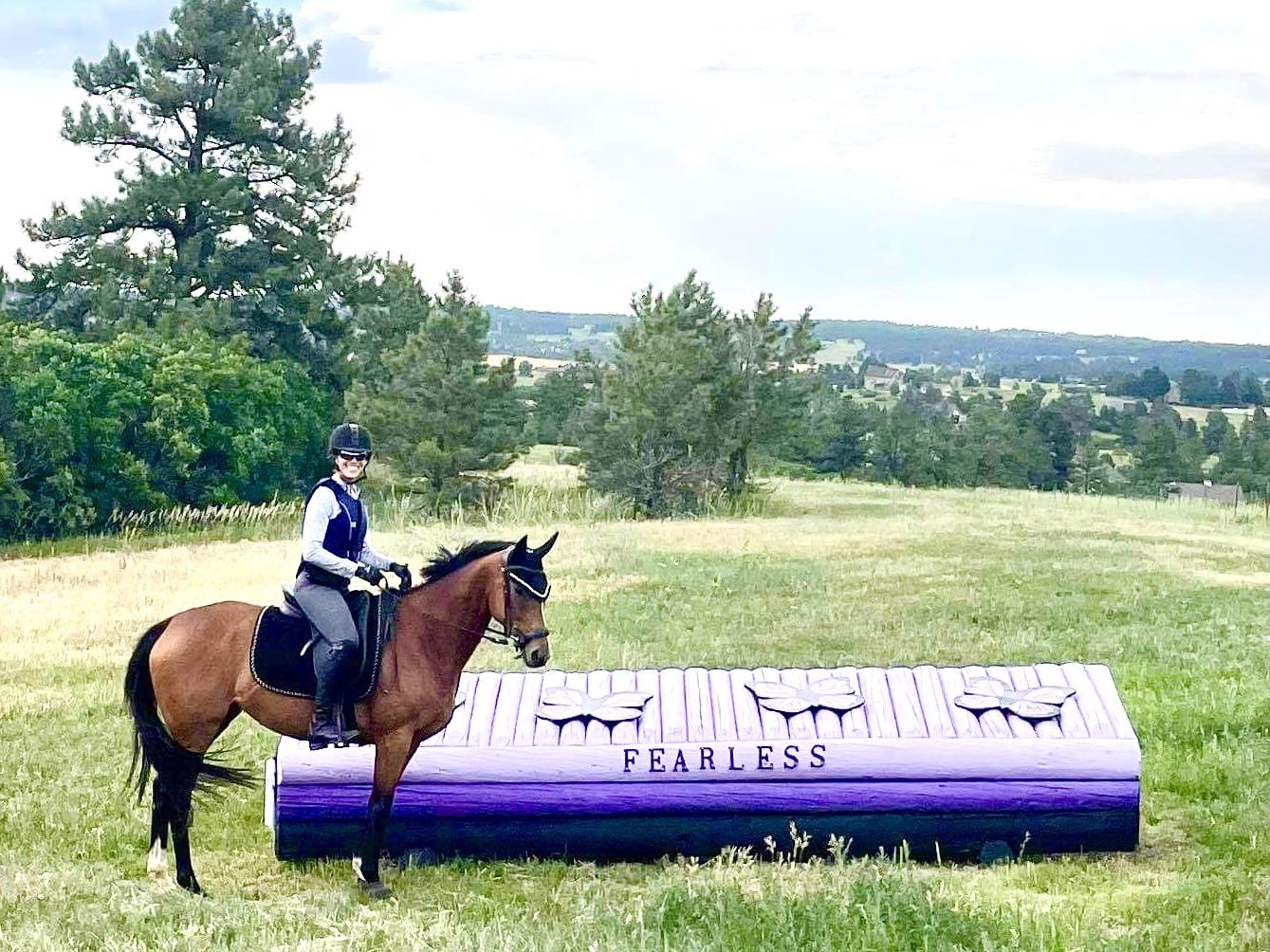 Planning ahead — visiting Platinum Farms a week in advance of their big event. Photo by Amanda Minervini.

We went to a friend’s inaugural event in mid-July The event had cross country runs and obstacle courses, the latter of which we’d been working on at home for weeks. We showed up early so Kittie could have more practice simply standing at the trailer for long periods of time and getting used to all of the activity going on around her. When it was time to ride, she spooled up a little but came back to earth in just a few minutes and I was able tackle the mounted arena obstacle course, and we had a blast. Because of the work we’d done at home, she even excelled with obstacles she had never seen, including walking over a mattress, through tires, and over a bridge — and she did so with a level head. 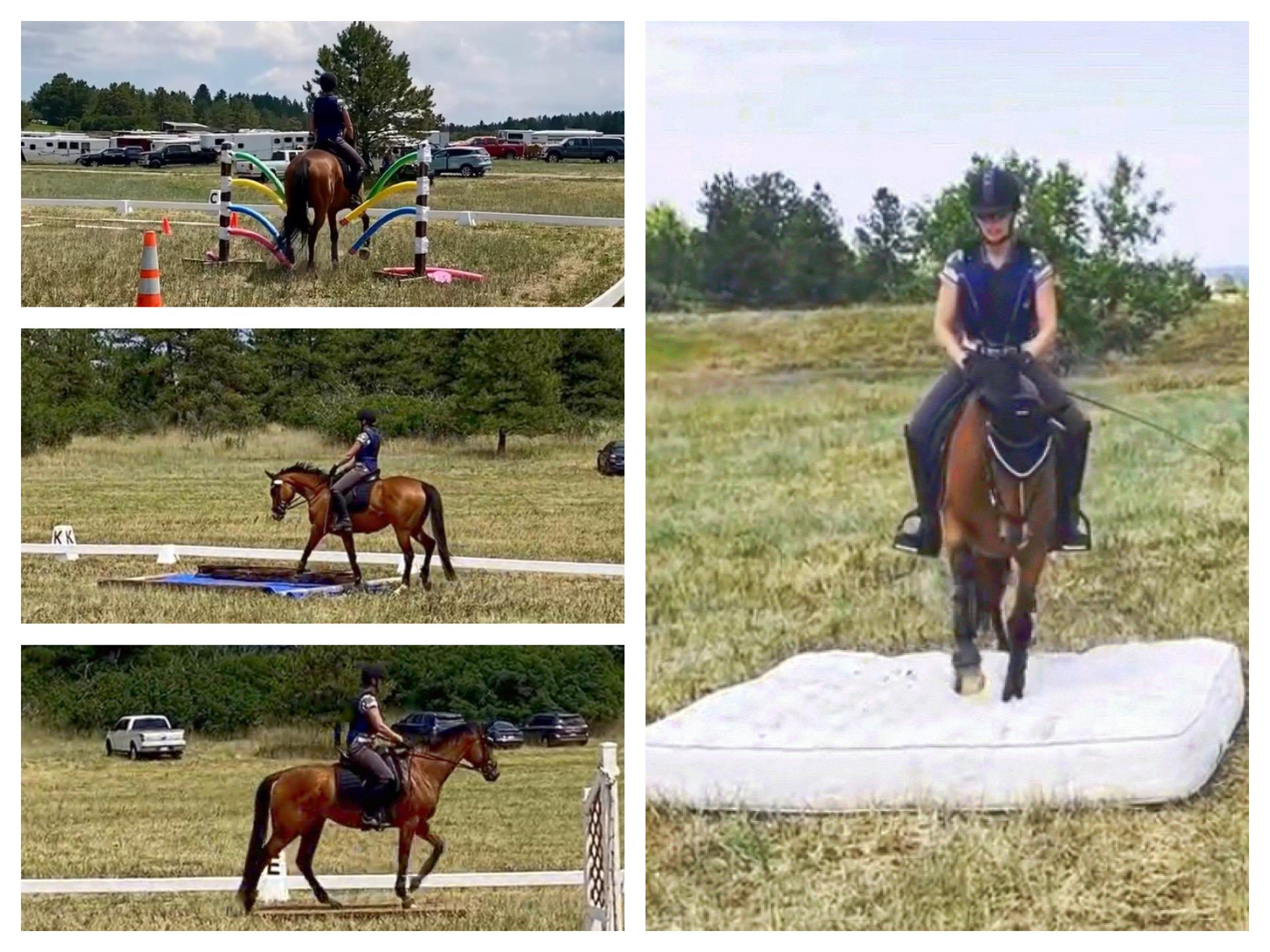 Kittie shining on the arena obstacle course at the Platinum Farms inaugural event on July 17, 2021. Photo by Kyle Chism.

Then we headed towards the field to do the trail version of the course, and that’s when things got interesting. We made it through exactly three obstacles before she hit her mental wall, and I opted to dismount for safety. She just could not handle horses cantering by in the distance, or worse, behind the copse of bushes 200 feet away. We proceeded with groundwork for the next 40 minutes with her choosing to jig, canter in small circles, and largely ignore me, while I continued to create a small, contained space for her to encourage her brain to come back. It did, eventually, and we ended the day by her walking right into the water jump (it appears I have a water horse!). 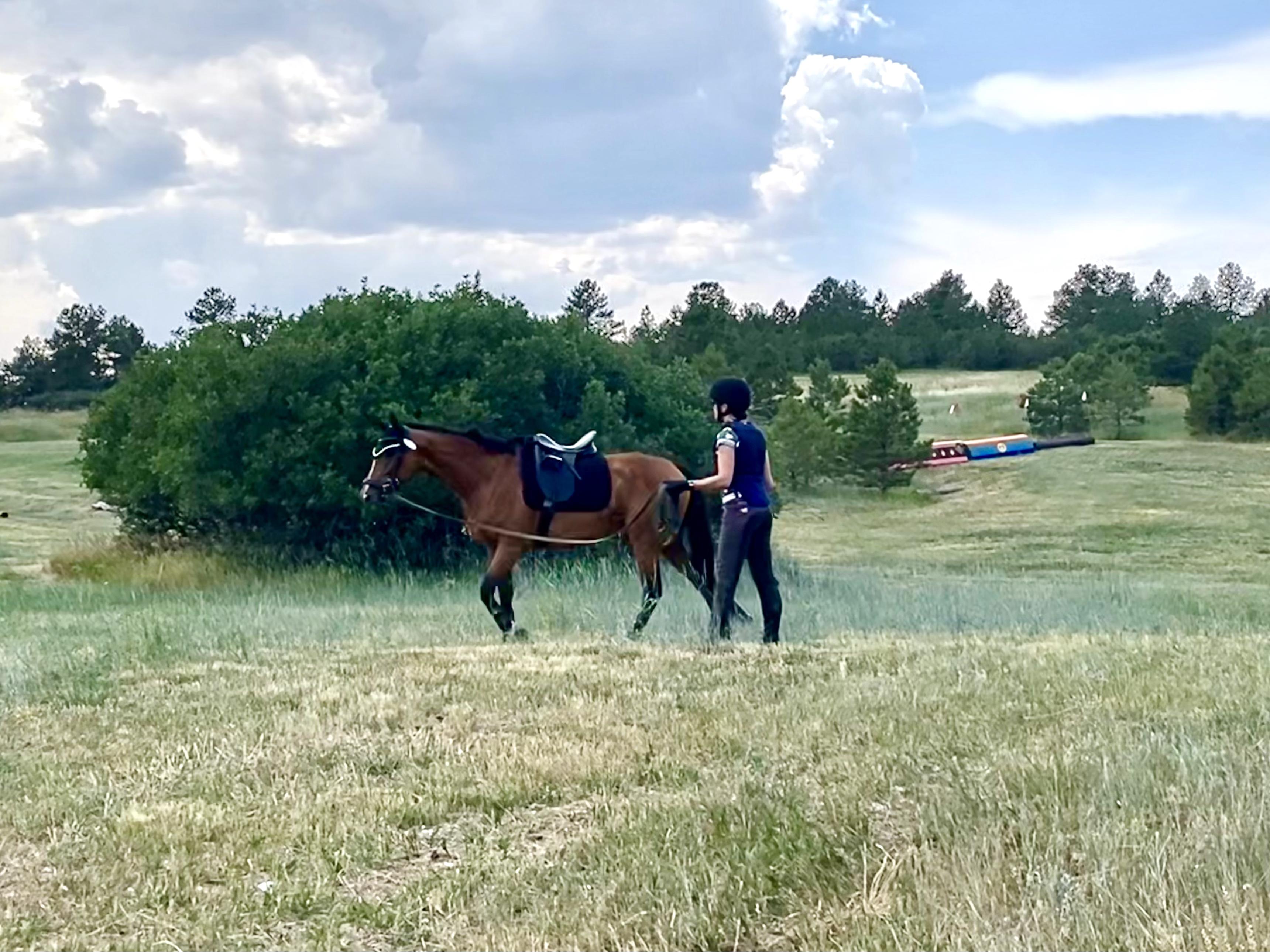 Know when to change the equation, and take it back to the basics. Photo by Kyle Chism.

It’s because of days like this, even with two months to go, that I am questioning if it will be the right decision to take her. The Kentucky Horse Park is a big environment to start, and given that the Makeover postponed last year, there will be over 800 horses there between the two years.

But then, two weeks ago, I returned to training with the woman responsible for teaching me everything I know about the sport of eventing. Seventeen years ago, she took a 4-H western riding 17-year-old, sat her in an English saddle and turned her into a young woman with respect for the sport and the horse. Lynn Klisavage is a legend, and rightfully so. In just two sessions, we have become decidedly unstuck and the pieces are falling into place.

In our first lesson, she evaluated the current state of our training and decided it was time for Kittie to put rubber to the road. No more of this “be nice to the baby horse while she builds muscle.” It was time for Kittie to be in the bridle, and no, she was not allowed to argue about it. She worked us through this for what remained of that session and gave us homework, too.

Nine days later we returned, and after we demonstrated a massive leap in our ability to stay on contact, we quickly turned to our nemesis… cantering. To the right, she was wonderful, and the on-the-bit work of the last week had worked wonders for her frame and balance. But to the left, she immediately started arguing and fired off her kick-out-into-the-canter “trick.” Lynn pointed out that in continuing to work as we had, we’d just started to create a habit of argumentation, and it was likely showing up in places beyond the canter work in the arena (like perhaps in big fields?!).

So, instead of continuing to push from trot into canter, Lynn had us go back to the walk, where her frame and gait were exceptional, and ask for the canter from there instead. What did she do? She cantered, of course. Beautifully. More importantly, I have better tools to help Kittie through her baby bobbles, that give her confidence instead of creating more discord and poor habits. 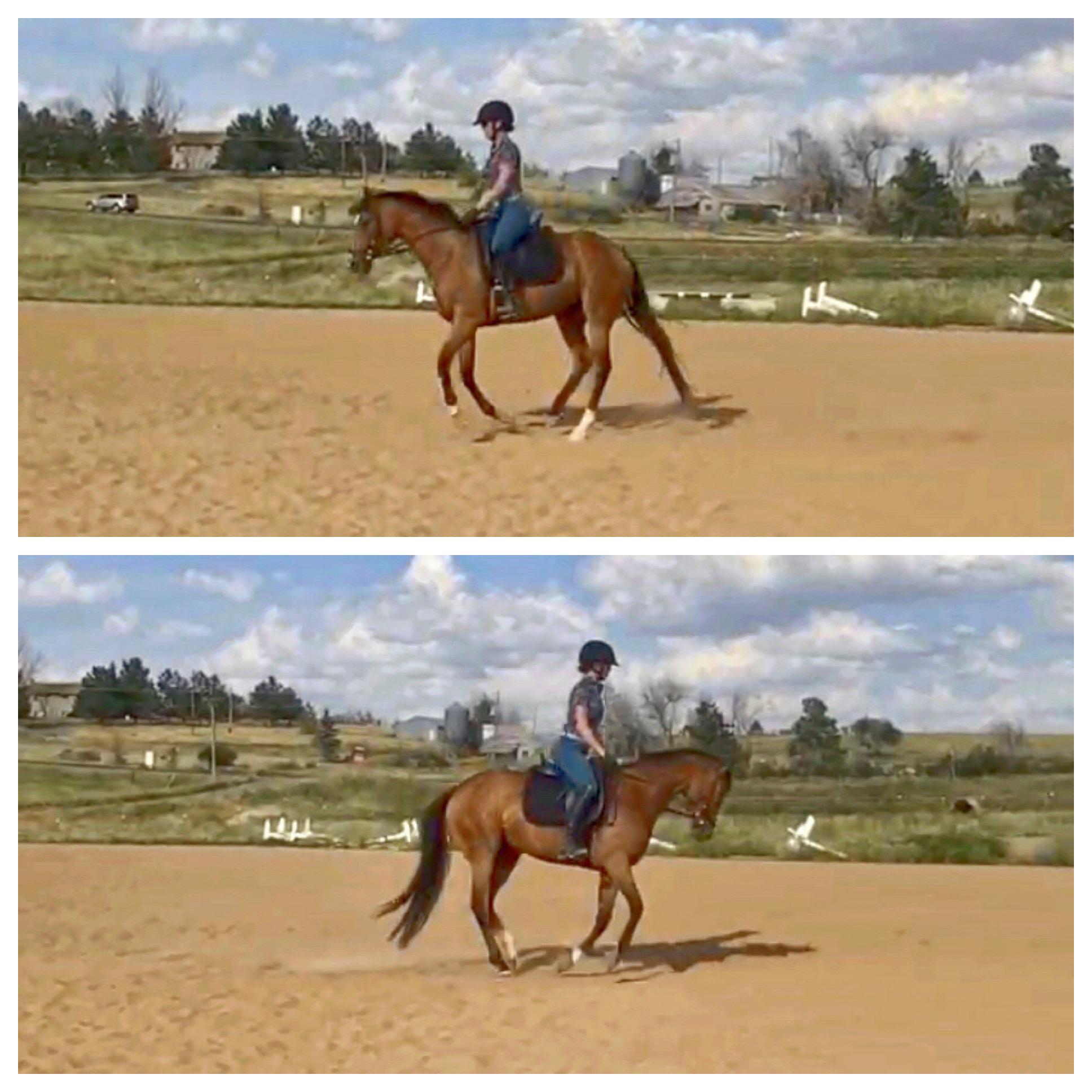 Kittie cantering at home a few days after our most recent Lynn lesson. Massive change from even a few weeks before. Photo by Robyn Schnelvar.

Never discount the power of having someone on the ground to help, especially someone with the years and knowledge that Lynn does. She is irreplaceable.

If you’re wondering if I signed up for the Freestyle as my second discipline, I did! Now to come up with a routine… it shouldn’t be too hard, right?!