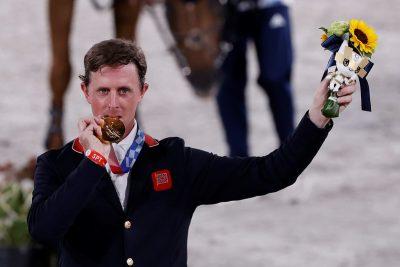 “I don’t know what was more pressure, this or getting married in two weeks,” said Great Britain’s Ben Maher as he clutched the Individual Jumping gold medal he won in Tokyo. 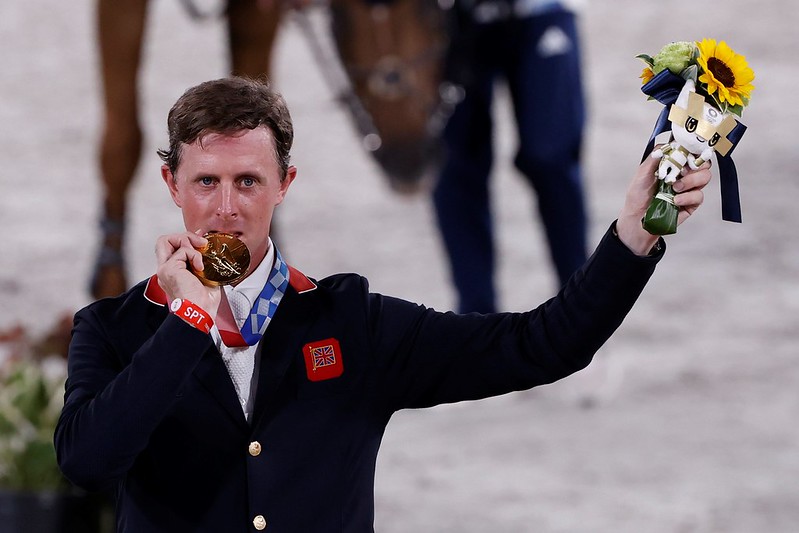 “I don’t know what was more pressure, this or getting married in two weeks!”, said Great Britain’s Ben Maher as he clutched the Individual Jumping gold medal he just won at the Tokyo 2020 Olympic Games in Baji Koen tonight.

“It doesn’t seem real. I think it will sink in tonight or tomorrow when I wake up. It’s been a lot of pressure the last couple of weeks. I may be biased but I believe I am on the best horse, he’s incredible and I’m very fortunate to be able to ride him”, said the 38-year-old athlete. Few of the other riders would argue about that.

With the 12-year-old Explosion W he was already leading the posse after yesterday’s qualifying competition, so he had the best of the draw when last to go in tonight’s first round. And having made the cut into the six-horse jump-off he simply out-ran all the rest, Sweden’s Peder Fredricson having to settle for silver with All In at their second Olympic Games in a row, while The Netherlands’ Maikel van der Vleuten and Beauville Z took the bronze. 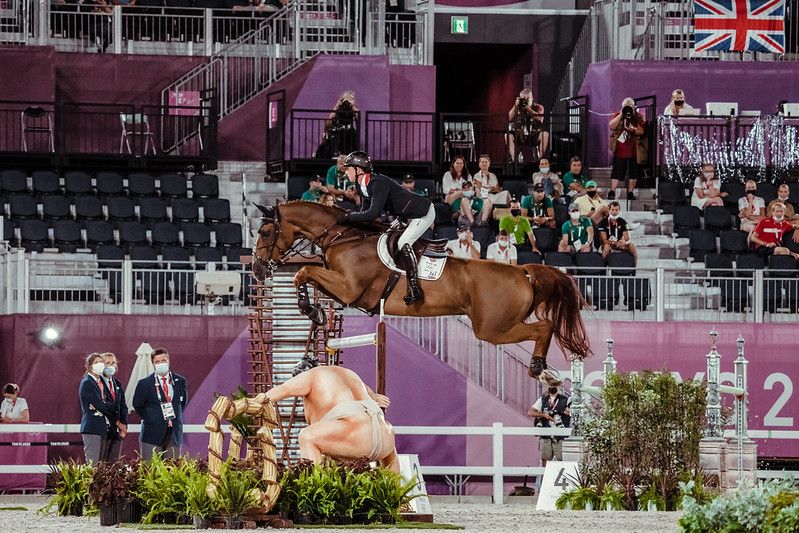 Course designer, Spain’s Santiago Varela, outdid himself once again with a first-round track that tested courage, scope and speed, and six of the 30 starters, including a staggering three from Sweden, qualified for the jump-off.

IOC President Thomas Bach was one of a number of IOC dignitaries onsite at the Equestrian Park tonight, and was very happy to watch the jump-off from the athletes’ tribune.

All six jumped clear again, and when pathfinder Daisuke Fukushima crossed the line with Chanyon in 43.76 seconds to set the first target it was a huge moment for the sport in Japan. Sweden’s Malin Baryard-Johnsson was next to go with her feisty mare, Indiana, who broke the beam three seconds quicker but then compatriot Peder Fredricson raised the bar to a whole new level with a beautifully-executed run that saw him race across the line with All In in 38.02 seconds. 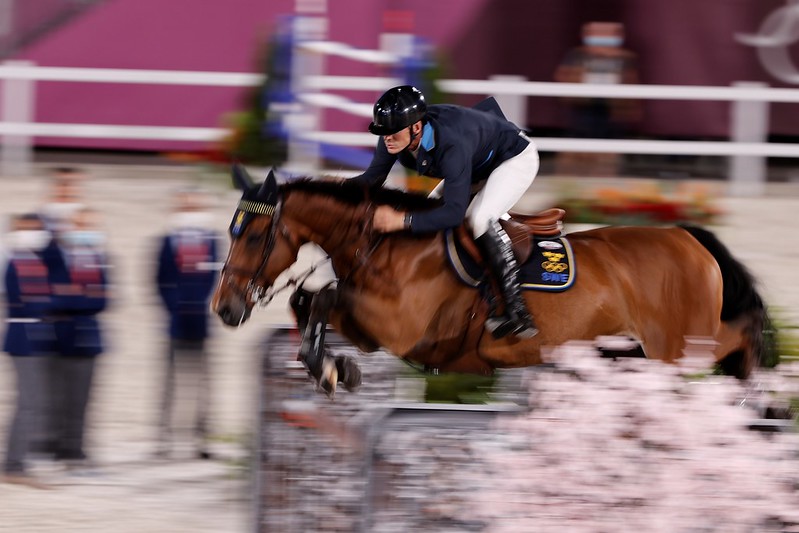 All eyes were on Maher who was next to go. The four-time Olympian who won team gold at the London 2012 Olympic Games is a formidable competitor, and with Explosion W is in a class of his own. He knew the expectations were high but he handled it with grim determination and his brilliant 12-year-old gelding got him home in 37.85 seconds which never looked possible to beat.

Last of the Swedes, Henrik von Eckermann gave it his best shot with King Edward who stopped the clock in 39.71 seconds. That seemed plenty good enough for bronze, but Dutchman Maikel van der Vleuten set off with his jaw set square and steered Beauville Z home in 38.90 seconds to squeeze him off the podium. 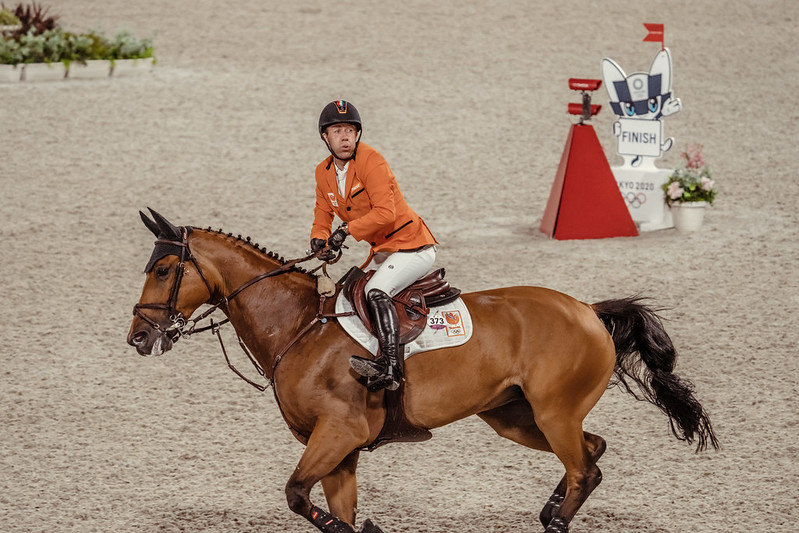 “It’s amazing because I came here with no expectations!”, van der Vleuten said. “I have quite an inexperienced horse at championship level and as we all saw yesterday there is an extremely strong field here with many horses in good shape and how often in the past you do a good jump-off and you get fourth or fifth, and it was also not difficult today to get fourth or fifth. I was trying to go for it without overdoing him and it worked out well. I think the first two combinations (Maher and Fredricson) many people would have thought they had a big chance, they have so much experience and are fantastic riders so to be third with this horse at this level is a little bit like gold for me!”.

Fredricson was happy with silver, but it wasn’t the target. “All the top riders want to take the gold medal but today it was Ben’s day, he did a great round and that’s the way it goes, it’s really small margins”. Britain’s Nick Skelton pipped him for gold at the Rio 2016 Olympic Games, but the following year All in won the Individual European title before an injury in December 2017 left the horse out of action for 18 months. He only came back into competition work in April this year.

“I always had it in mind to have him in top shape here but we were running a bit late with Covid and then the horse virus, and I was running out of time to get him the last bit of competition fit. I would say he just came into a peak when he came here. He jumped great yesterday and today when I took him out he was really good again”, he said of the 15-year-old horse whose track record also includes team silver at those European Championships four years ago. 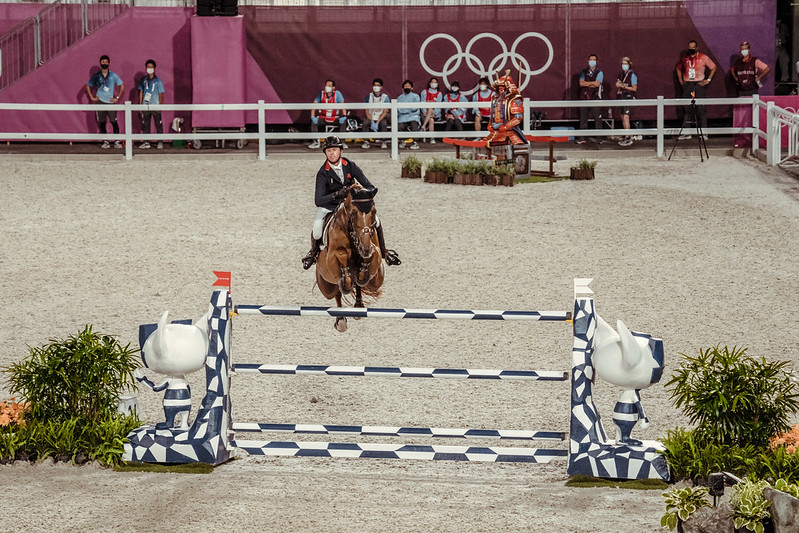 The new champion said tonight, “there are so many people I owe this to in the end, obviously Explosion is the main one but there are vets, farriers that have been with me for 15 years, my team back home, Cormac Kenny who is my groom. He came to me from Ireland when he was 16 and he grew up with me and he’s here to be a huge part of this moment. My family, my fiancee Sophie — we are getting married in two weeks time — so many people. I’m looking forward to getting home and having a great celebration!”, Maher said.

Great Britain has now claimed a total of 5 equestrian medals so far at the Tokyo 2020 Olympic Games.

The horse Kilkenny, ridden by Cian O’Connor (IRL), had a nosebleed (epistaxis) during the Jumping Individual Final today at the Olympic Games Tokyo 2020. The nine-year-old Irish-bred gelding, which completed the course with just a single time fault, was checked by veterinarians immediately after the competition and, as a precaution, the horse will go to the onsite Veterinary Clinic for a further examination. Under the FEI Jumping Rules, blood on the flanks or in the horse’s mouth results in elimination, however, equine epistaxis is not a cause for elimination. The horse Kilkenny has been withdrawn from the Team competition which begins on Friday.