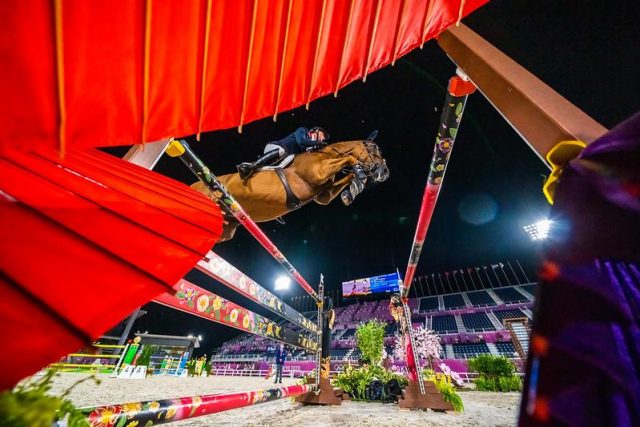 Only 30 of the 73 starters could qualify for tomorrow’s Individual jumping medal-decider, and no Americans made the cut. Now they’ll be turning their attention toward the Jumping Team Qualifier on Friday. Here’s a recap of today’s action from Tokyo! 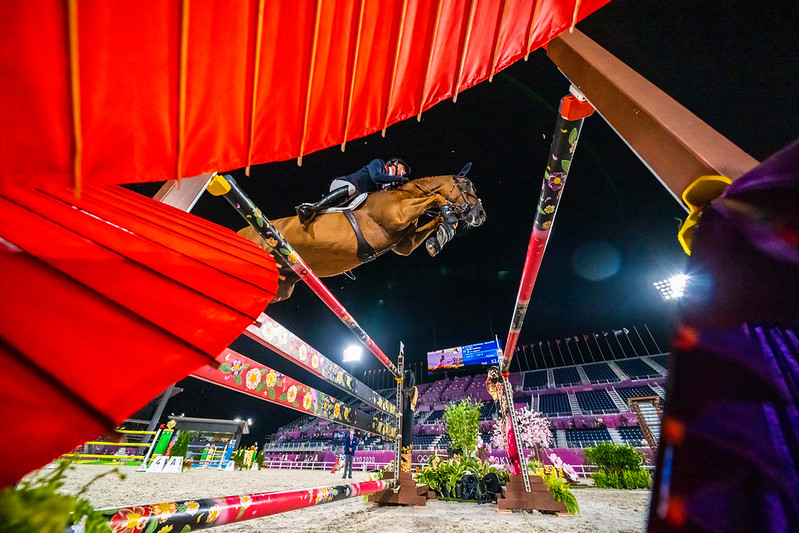 Ben Maher (GBR) and Explosion W had the fastest round of the night. Photo Copyright © FEI/Arnd Bronkhorst.

There was an edge-of-the-seat start to Jumping at the Tokyo 2020 Olympic Games today, with fluctuating fortunes in the opening first Individual competition. Only 30 of the 73 starters could qualify for tomorrow’s Individual medal-decider, and with many horses finding the atmosphere electrifying and the fabulous course of fences more than mesmerising, even the best of the best admitted that tonight’s 14-fence challenge was a big one. The colour and creativity of Santiago Varela’s course was nothing short of spectacular, and he gave them plenty to jump too.

Switzerland’s Martin Fuchs was partnering his superstar Clooney who carried him to Individual glory at the European Championships in Rotterdam two years ago, but he still found today’s opening competition a big test.

“The course itself wasn’t super tricky but what makes it difficult is that it’s the Olympic Games, the pressure is there, Clooney feels the pressure and I feel it, the rideability wasn’t as it should have been. But usually he gets better from day to day and I think now we have the most difficult round of the week behind us”, Fuchs said. 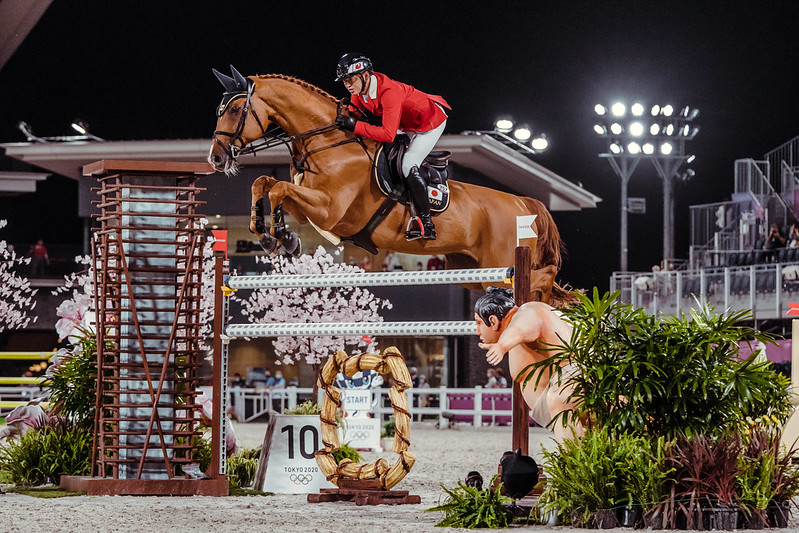 The was a big roar of approval when Japan’s Daisuke Fukushima produced the first clear of the competition when seventh to go with Chanyon, and the host nation were hugely impressive when all three of their riders made the cut to tomorrow’s Individual showdown. Other nations who also have three riders through are Belgium, Great Britain, Ireland and Sweden while Fuchs will be joined by Swiss compatriot Beat Mandli and both Egypt and The Netherlands will also have two representatives.

Britain’s Ben Maher produced the fastest round of the night with Explosion W so has the best of the draw tomorrow. “We’ve been waiting a long time and we’ve been edgy to get going. It was a big enough course today and a lot of horses are a little bit spooky, I don’t know whether it’s the new jumps or the lights and I felt that with him. This is my most nervous round of the week. He’s a horse that improves as the rounds go on, so he was having a little look today but he’s naturally a fast horse and he did everything he needed to do”, Maher said. 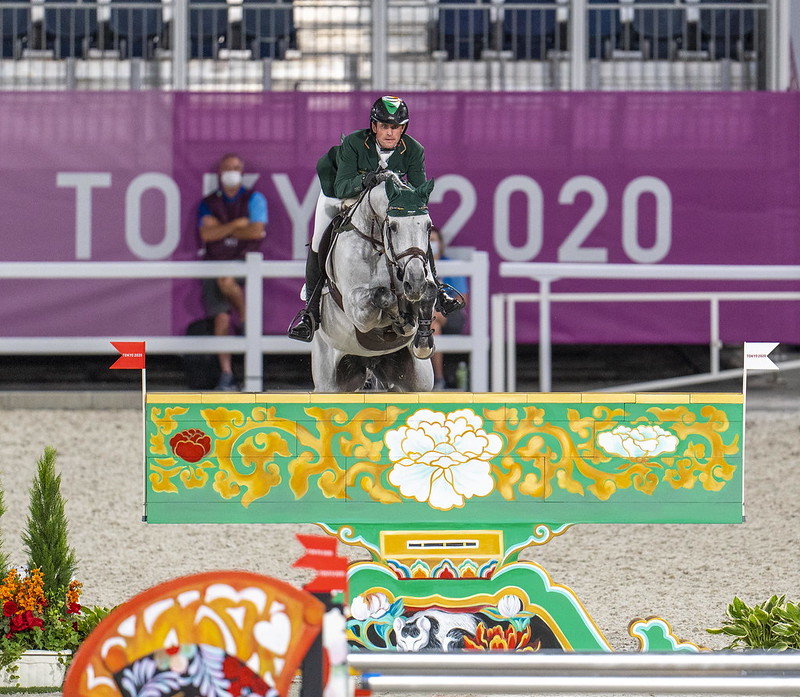 Second-fastest of the night was Ireland’s Darragh Kenny riding Cartello. “Not a lot of people know the horse — this is only my sixth FEI show with him, I’ve only had him since May”, Kenny pointed out. “He was with Irish riders before so he was in Irish ownership for the Olympics. Cormac Hanley and Lorcan Gallagher rode him and they both had great success with him, he’s been a good horse for everybody. He jumped great in Rome (ITA) and Madrid (ESP) over the last couple of months, but this week will be a big ask. But he feels up to it and we’ve had a great start”, he added. 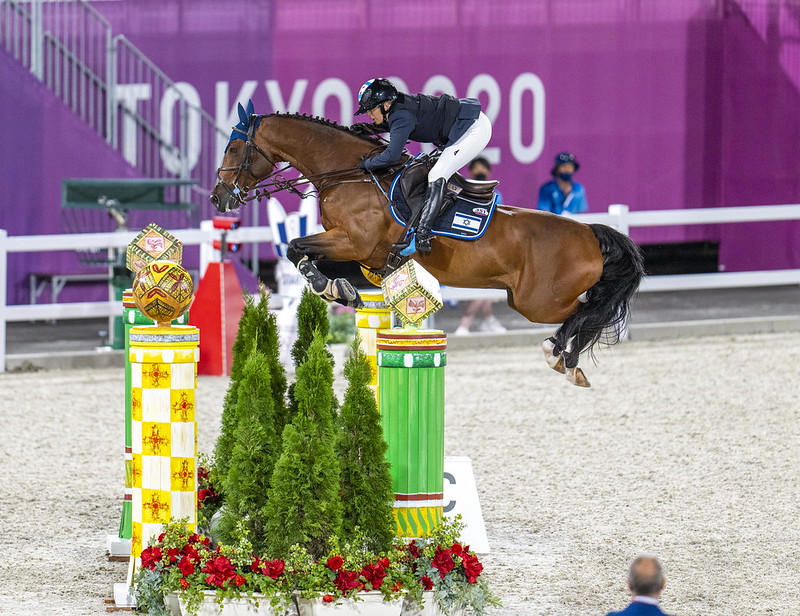 There were four eliminations and four retirements during the competition, with the turn to the white vertical at fence 10 proving costly for several riders, the large Sumo Wrestler holding up the left-hand wing possibly something of a distraction here.

Penelope Leprevost, a member of the gold medal winning French team at the Rio 2016 Olympic Games, was one of its victims when Vancouver de Lanlore had a run-out. “I was trying to relax the horse on the turn and he was maybe surprised when he found himself so close to the vertical”, she said.

The only French rider through tomorrow is Nicolas Delmotte with Urvoso du Roch but for Team USA tonight was a bit of a shock. The side of Jessica Springsteen, Kent Farrington and Laura Kraut were expected to be major players at these Games but none of them have qualified for tomorrow’s next stage of the Individual competition. 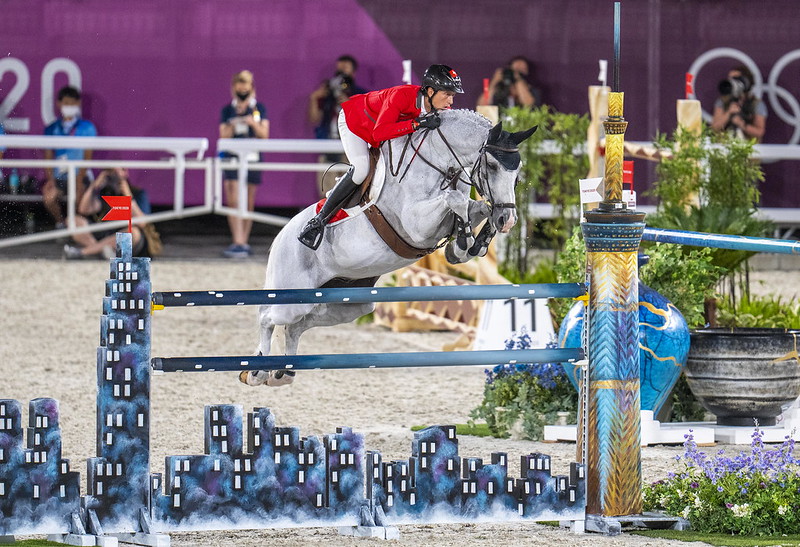 Olympic pressure is nothing new, and Switzerland’s Martin Fuchs talked about that tonight.

“I was feeling a little nervous Sunday and Monday night, and yesterday I had a good talk with the sports psychologist for the Swiss team and he really helped me to ease the feeling a bit. I told him I’ve never had this feeling before, being nervous, it’s totally new to me. He gave me a few small but good advices and it helped me a lot.

He asked me what was the problem, I told him on Sunday after the warm-up I felt so excited because Clooney felt so good and thought OK now we can win a medal. This carried me through the night and woke me up a couple of times and he said Martin what are you here for? I said, to win a medal. He said, no what are you doing here? I said, I ride. He said, exactly you ride. You don’t need to think, we have other people to think, the Swiss team brought you here to ride and not to think, so just get on your horse and ride and leave the rest to the smart people!”

He’ll be doing that tomorrow evening for sure. 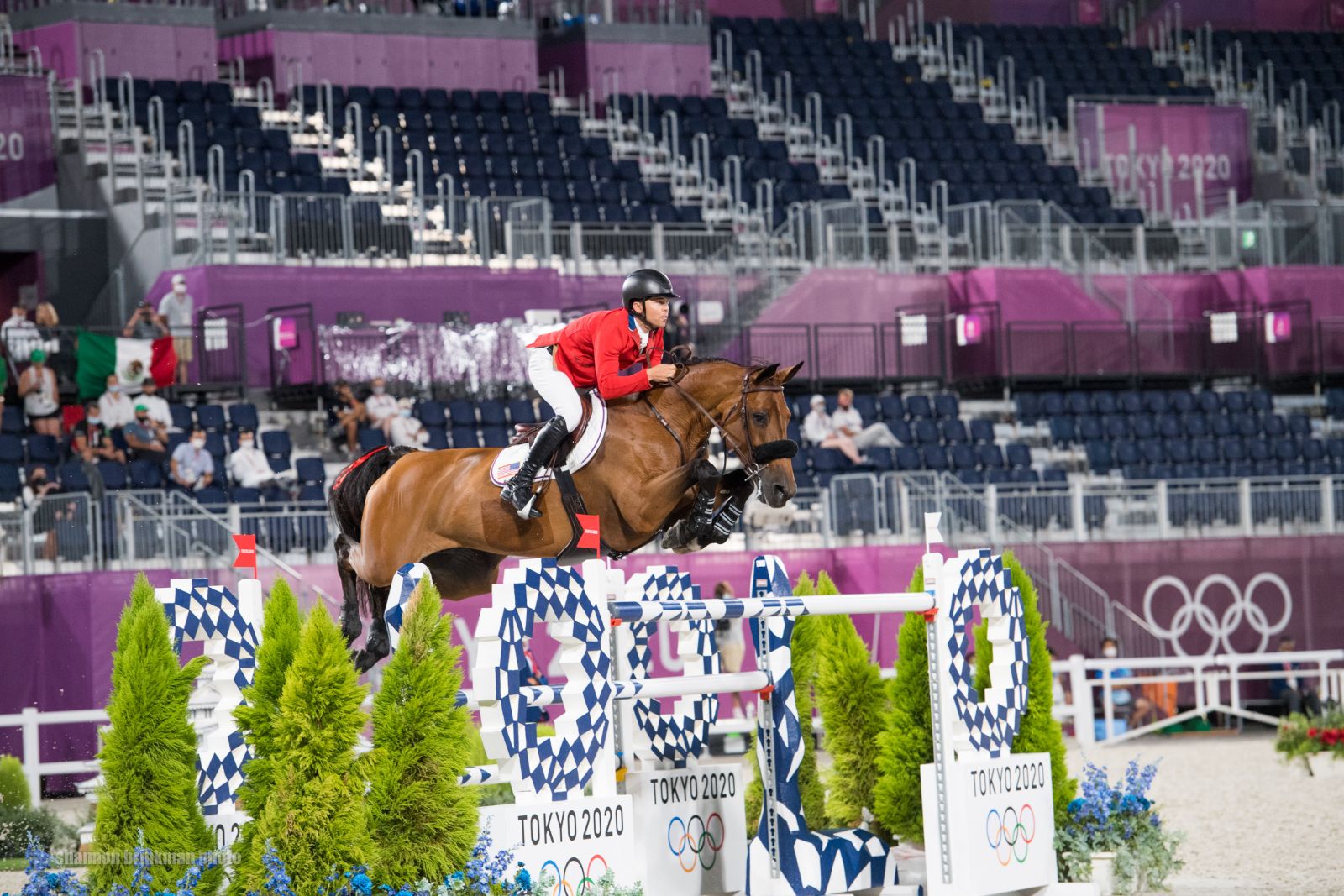 Photo by Shannon Brinkman for US Equestrian.

Jessica Springsteen and Don Juan van de Donkhoeve were the first pair to test the Santiago Varela (ESP) 1.65m track under the lights, crossing through the finish in 87.15 seconds and an unfortunate four faults. Kent Farrington and Gazelle were the second combination out for the team and just barely rubbed the first rail of last double to finish with a time of 88.57 seconds and an additional four faults added to their score. Laura Kraut and Baloutinue rounded out the combinations for the U.S. Jumping Team and completed the track with eight faults in 85.23 seconds.

Springsteen (Colts Neck, N.J.) and Don Juan van de Donkhoeve, a 12-year-old Belgian Warmblood stallion owned by Stone Hill Farm, made their Olympic debut for the U.S. Jumping Team, and impressed in their trip around the beautifully built track. Springsteen felt the pressure of being the first combination out for the U.S. and delivered with a strong start to their week of competition ahead.

“My horse jumped unbelievable,” said Springsteen. “I couldn’t be happier with him. When I walked that line, I thought that would ride a little bit more up, but my horse has such a big stride, and he jumped the wall very forward, so I just think I was a little bit quieter there but all-in-all I’m thrilled with the round and I’m excited for the rest of the week.”

Farrington (Wellington, Fla.) and Gazelle, one of the most notable and successful combinations in the world, looked formidable as they tackled the course, but one uncharacteristic rail kept them out of the qualifying for the Individual Final. Gazelle, a 15-year-old Belgian Warmblood mare owned by Robin Parsky and Kent Farrington, is a seasoned competitor at the international level and now adds an Olympic Games to her long list of accomplishments. Farrington was disappointed with the score but is ready to game plan with the team for Friday’s competition.

“A harsh reality of our sport is that you have one rail down and you’re out. The new format here being what it is, is that this is the only qualifier for the individual final and is all or nothing and unfortunately for the American team right now it’s nothing, so just a tough night for us,” said Farrington. “Any horse can have a rail down and it wasn’t the right day to have one down, so it was costly. We’ll go back as a team and regroup with a plan and look forward to doing better later this week.”

As the most recent partnership of the team combinations, Laura Kraut (Royal Palm Beach, Fla.) and Baloutinue, an 11-year-old Hanoverian gelding owned by St. Bride’s Farm, faced their biggest track together so far this evening and the energetic and nimble gelding looked fit and ready for the rest of the week ahead.

“I was really pleased with three quarters of the course. I thought my horse jumped fantastic. He was focused and he stuck right with the plan that I wanted. I wouldn’t say that it actually went wrong; I got the jump into the wall that I wanted, which led me into the four and he had an uncharacteristic touch of a back pole,” explained Kraut. “I lost a tiny bit of concentration to the last and didn’t fight as much as I should have, and he barely touched that. I’m not disappointed in him at all, just disappointed with the score.”

The team’s Chef d’Equipe Robert Ridland discussed his analysis of tonight’s track and what he expects in the days to come for the Individual Final and the Jumping Team Qualifier and Team Finals competitions, which will be the focus for the next two days.

“The strategy was to go clean, which we didn’t do, but all along we’ve been very aware that this is a four-day process and the horses jumped very well tonight and the riders rode well. It just wasn’t our night, but the flip side is we’ll have fresher horses on Friday night and the course designer, Santiago, is definitely going to step things up tomorrow,” said Ridland. “This wasn’t our plan, but we’ll play it to our advantage to some degree and I think we’re in good shape for Friday, though it’s obviously disappointing to not be in contention for an individual medal.”