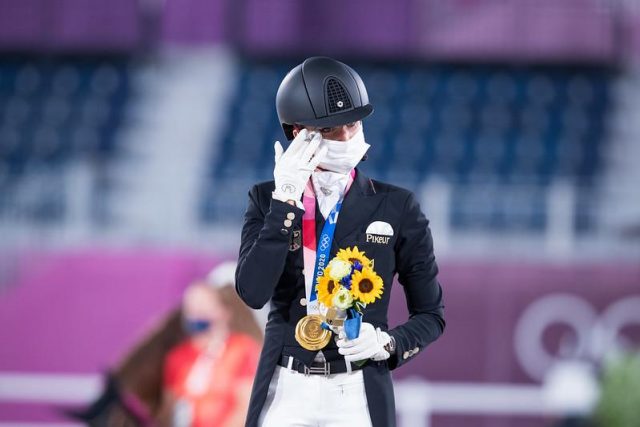 Imagine taking double gold at your very first Olympics. Now imagine doing it while throwing down a freestyle score of over 90%. Sound like the stuff of daydreams? Today, it became Jessica von Bredow-Werndl’s extraordinary reality. 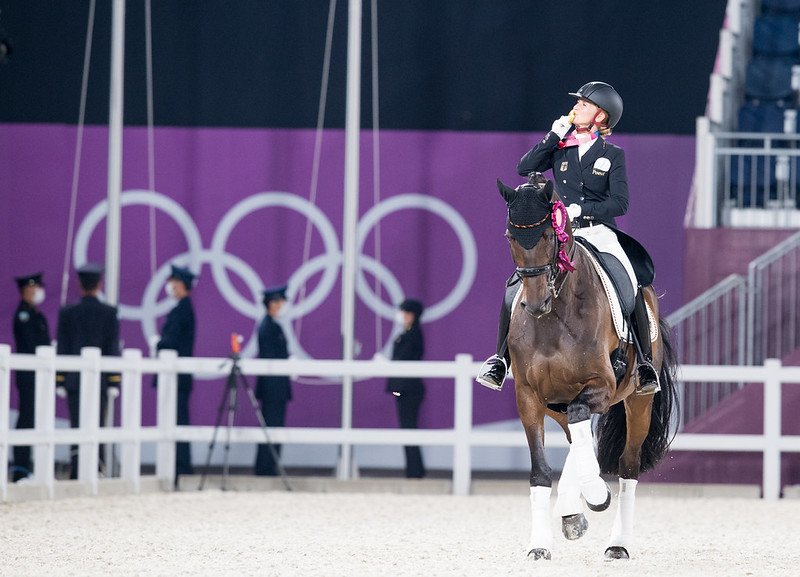 Everything about the Tokyo 2020 Olympic Games has been a journey into the unknown. But there was a ring of familiarity combined with spirit of great sport when Germany’s Jessica von Bredow-Werndl claimed the Individual Dressage title with the lovely mare TSF Dalera at Baji Koen Equestrian Park tonight where compatriot Isabell Werth had to settle for silver and Great Britain’s Charlotte Dujardin took the bronze. It was the perfect end to four fabulous days of competition in this first of the three Olympic equestrian disciplines.

The new champion was always on song, throwing down the biggest score in the opening Grand Prix and then setting a new Olympic record in yesterday’s Grand Prix Special to secure the team title for her country. Tonight she produced another performance that oozed such class and elegance that once she left the arena, with a score of 91.732 on the board, it seemed impossible she could be beaten.

But the game is never over until it’s over, and the tension and emotions in the closing stages were extreme. Of four remaining combinations still left to take their turn, three of them were a real threat, and as she was trying to engage in a post-competition media interview Von Bredow-Werndl’s eyes were glued to the nearby screen, because, third-last to go, her compatriot Isabell Werth was in the ring. 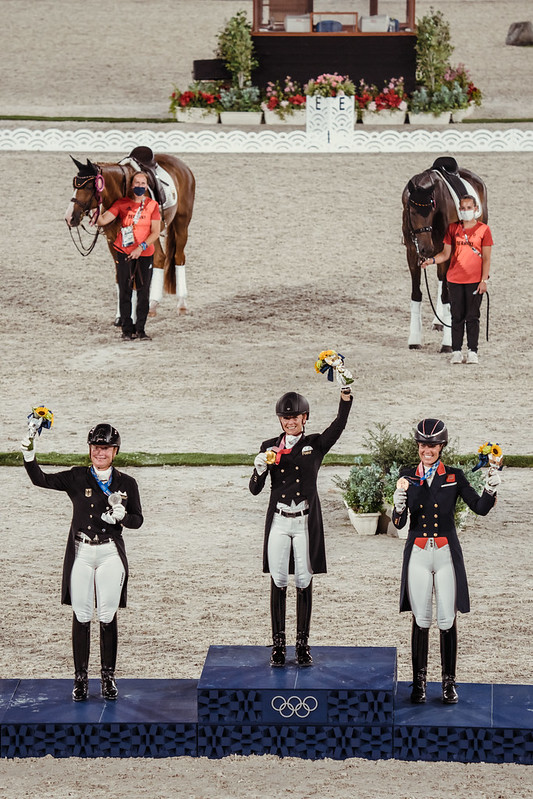 Werth is a longtime legend with more Championships and Olympic medals in her trophy cabin than any other equestrian athlete. Never the shrinking violet, she is not used to playing second fiddle to her own teammates and with her much-loved mare Bella Rose she produced one of her typically spellbinding performances that kept onlookers glued to every move. However when her score of 89.675 was posted Von Bredow-Werndl burst into tears and fled back to the stables, overcome by the possibility that Olympic gold was now within reach.

Second-last to go was defending double Olympic champion Charlotte Dujardin from Great Britain, but not with the now-retired superstar Valegro with whom she dominated the sport in recent years but instead with a 10-year-old gelding who knows nothing about the world.

Von Bredow-Werndl’s mare took team gold at the FEI World Equestrian Games in Tryon, USA in 2018 and individual bronze at the European Championships in Rotterdam, The Netherlands the following year. Werth’s mare is a veteran of two World Championships in which she medalled and also those Europeans where she also took gold. On the other hand Dujardin’s little chestnut, Gio, had previously only ever competed at one international show, at Hagen in Germany in April. Unaware of the level of exposure he was now getting however, the little chestnut gave his all for a score of 88.543 which put him in bronze medal position.

Only the last of the German riders, Dorothee Schneider, could change the podium places now and under normal circumstances she might well have ensured it was an all German one but it didn’t happen when her horse, Showtime, was right off form. 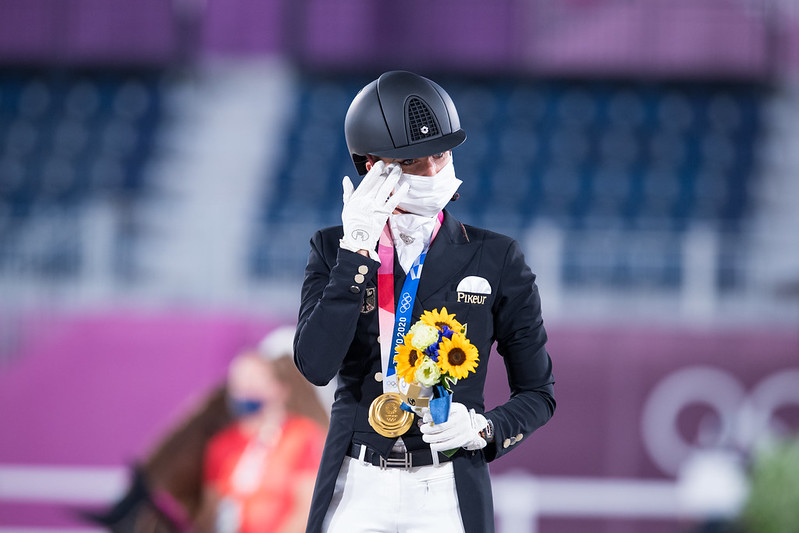 Talking about the spectacular ride she enjoyed on Dalera tonight that earned the coveted gold, Von Bredow-Werndl said, “I felt from the very first second to the last the she was 100% with me – listening so well that I had to be careful not to do too much or too little!” She’s been riding the 14-year-old mare for many years now, but she’s had a new level of belief in their potential since producing a great performance at the 2019 European Championships.

“We didn’t have such a lucky start in the Grand Prix or the Special there, but in the Freestyle we showed that anything is possible and from then on I began believing the Olympic dream could come true”. Now it has…

Meanwhile silver medallist Werth was asked what it was like to no longer be the number one German rider, and replied with her usual usual wisdom. “If you follow the results of the last 30 years I have not always been number one, it has been up and down all the time and I’m happy today because Bella felt fantastic. This was a tough sporting competition and that’s what we all want to have and love to have. You can’t have ten winners, you can only have one, that is sport”, she pointed out.

Dujardin meantime, who in winning her sixth medal has overtaken rower, Dame Katherine Grainger, to become Great Britain’s most decorated female Olympian of all time, was delighted with her bronze. And she was thrilled with her little wonderhorse.

“I was never going down without a fight but Pumpkin (Gio) has only done one other Freestyle in his life and for him to go out there with as little experience as he has is truly outstanding. We never did this floorplan before and he didn’t know what he was doing and I didn’t know what I was doing but we just went out to have a really good time and enjoy ourselves, and we did that. I’m really proud of him”, she said.

Sabine Schut-Kery and Sanceo recorded their third personal best score of the week, earning an 84.300 percent, while teammate Steffen Peters (San Diego, Calif.) and Suppenkasper recorded an 80.968 percent from the Ground Jury.

After their historic team medal performance last night, Peters and Schut-Kery rode down the centerline to their FEI Grand Prix Freestyle music, giving the arena in Tokyo one last ride. Peters and “Mopsie” have a very modern and upbeat musical arrangement that Peters as said reminds him both of his struggles and of his excitement and energy for what’s to come.

“Mopsie gave me everything yesterday. Every single ounce of cooperation and he fought for our team. It was a clean test and almost an 81 percent so we’re happy,” said Peters. “The beginning of the music is ‘It’s Going to Be Okay’ by James Blunt, and personally, I’ve gone through a couple of rough years and my wife always kept telling me, ‘It’s going to be okay,’ so to honor her, I picked that music and also included the music I used with Ravel in 2009 when he won World Cup Finals. I figured after twelve years it was elegible for recyling,” he smiled.

Schut-Kery and Sanceo, who have been impressive in each of their outings this week in Tokyo, haven’t performed their Freestyle since 2018 and rose to the occasion to score a huge improvement on their previous personal best in the freestyle.

“It comes down to the fact that he’s there for me and I really do feel like we have an incredible partnership. He’s just sensitive, but not over-reactive, simply, he lets me guide him and lets me be the leader,” said Schut-Kery, as she described her long-time partnership with Sanceo. “My husband made this music for me. The first song with the piaffe and passage is from the Last Samurai, so it’s very fitting and I just love it. It has some elegant pieces and I think it really resembles Sanceo.”

The pairs efforts rounding out what has nearly been a two-month journey for the athletes, coaches, and support staff has come to a joyous close with the team returning to the United States with the team silver, the culmination of a massive group effort to ensure the team’s success.

“What an incredible few weeks we’ve all had together, and I am just so proud of this entire team,” said McDonald. “We came into these Olympics knowing that we could really deliver on the world stage and this historic silver medal is a testament to all of the hard work everyone involved in this program has built upon over the last several years. I am thrilled with our team and the continued momentum we’ve seen year over year at this level.”

Next on the equestrian schedule for the Olympic Games Tokyo 2020 is the discipline of Eventing, which will begin tomorrow with the First Horse Inspection at 10:30 a.m. JST/9:30 p.m. EDT and the first session of dressage taking place on Friday, July 29 at 8:30 a.m. JST/7:30 p.m. EDT.

Want to stay in the know with all things Olympic eventing? We’re getting ready to kick off daily editions of our Olympic Digest starting Wednesday, July 28. You can sign up for free right here.