Okay, okay. In some parts of the country (world), this is YESTERDAY in Tokyo. But for our Central, Mountain and Pacific Time readers, it’s still today…

Tonight’s victory for Germany in the Dressage team event at the Tokyo 2020 Olympic Games will go down in the history books. For the last 27 years the country that has long been the cradle of classical horsemanship has been all but unbeatable at this level of the sport, and despite the disruption and confusion of the last 18 months right across the globe they reigned supreme once again ahead of Team USA in silver and Great Britain in bronze.

There were mixed reviews for the new team format which separates athletes into groups and reduces team numbers to three, with all scores to count. But there was no denying the increased intensity and excitement it created in tonight’s deciding Grand Prix Special. While the Germans came out clear champions, the battle for silver and bronze was a thriller to the very end. 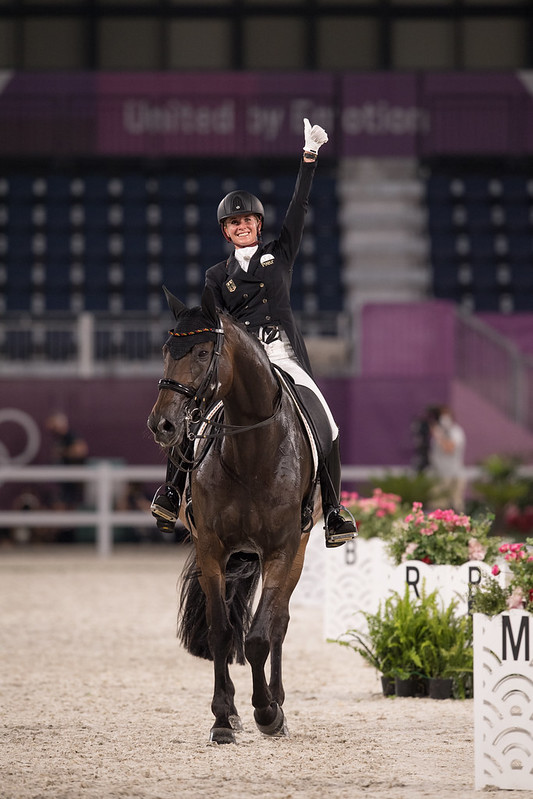 And a new star was born. Germany’s Jessica von Bredow-Werndl stole the show with the new Olympic Grand Prix Special score of 84.666 with the mare Dalera, and team-mate Isabell Werth posted 83.298 with a beautiful performance from her beloved Bella Rose after Dorothee Schneider and Showtime set out the German stall when putting 80.086 on the board. However a relatively unknown American produced the third-best score of today’s super-hot competition that decided the fate of the team medals.

Sabine Schut-Kery and Sancero have rocketed on to the world stage. 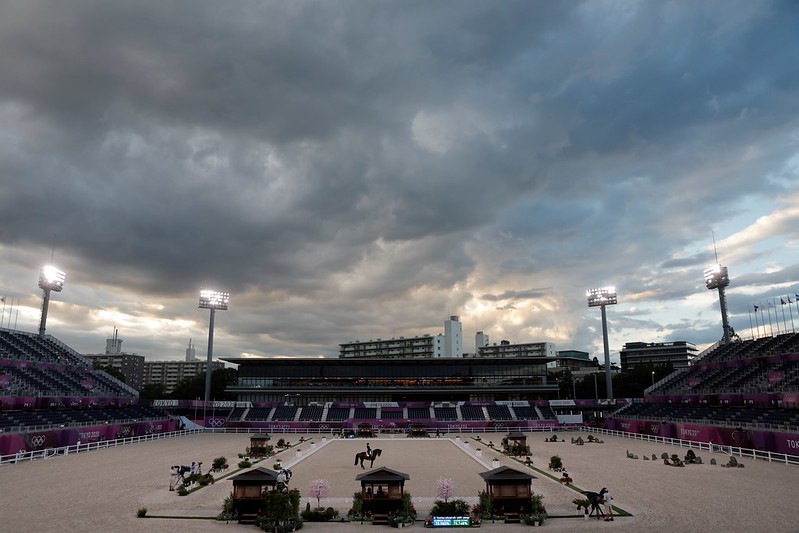 Great Britain looked set for silver in the early stages after Carl Hester and En Vogue posted 78.344, while it seemed Denmark and the USA were locked into a game of cat-and-mouse for the bronze. But the Americans couldn’t have been more rock solid, Adrienne Lyle’s 76.109 with Salvino giving them a firm basis on which to build before Steffen Peters and Sussenkasper backed that up with 77.766.

Cathrine Dufour and Bohemian were the last pair to go for Denmark, but 77.720 wouldn’t be enough to keep her country in the race, especially when America’s Schut-Kery followed with an incredible 81.596. That just knocked the Danes right out of contention and suddenly the British were under threat for their silver medal spot too. It would take a big score from Charlotte Dujardin and Gio to keep Britain out in front after Lottie Fry’s 76.894 with Everdale.

And although Dujardin’s inexperienced chestnut gelding did his best, his 79.544 just wouldn’t be enough.

Meanwhile last to go, von Bredow-Werndl strutted to a score of 84.666 to put the icing on the German cake. And that was despite a whoopsie in the one-tempis when her mare needed a toilet break. As von Bredow-Werndl said afterwards it was just another day at the office for the lovely, talented Dalera. “It didn’t feel difficult actually, for her it all seems to be easy!” 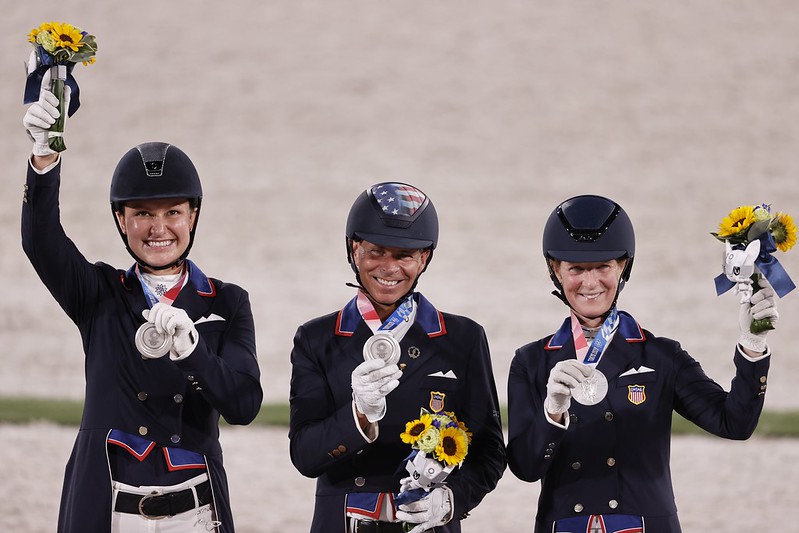 Adrienne Lyle and Salvino received a 76.109 percent from the panel, while Steffen Peters and Suppenkasper, who rode in the second group, finished the competition with a 77.766, a personal best for the combination. Sabine Schut-Kery and Sanceo anchored the team and received a career-high 81.596 percent from the judges as one of the final rides of the evening. 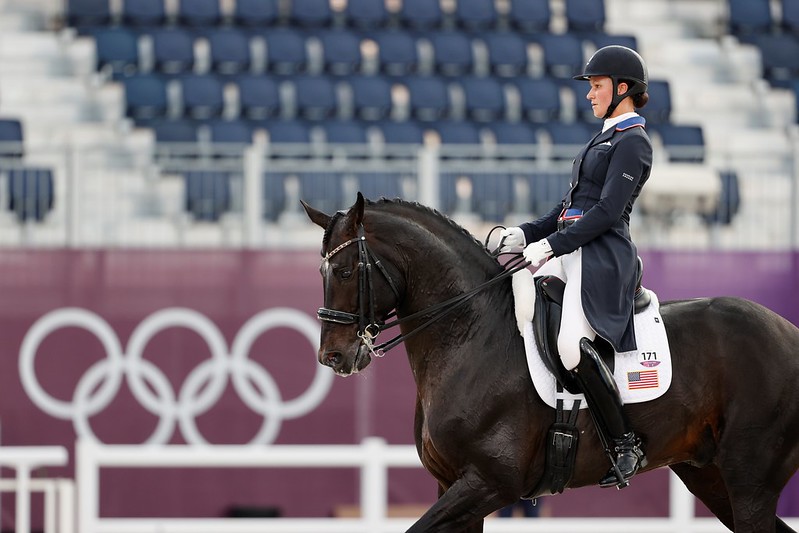 Lyle (Wellington, Fla.) and Salvino, a 14-year-old Hanoverian stallion owned by Betsy Juliano LLC, were the trailblazers for the U.S. Dressage Team, riding early in the first group order. The pair executed a mistake-free test, giving momentum to the team for their second ride with Peters and Suppenkasper.

“I’m super thrilled. I was really hoping we could pull off a score like that for the team today. We were a little conservative in the Grand Prix, and it wasn’t our greatest display, so I wanted to come out here and push for a little bit more,” said Lyle. “Despite the heat and humidity, he was really a good boy and he delivered with no mistakes and that’s what you want for the team test.” 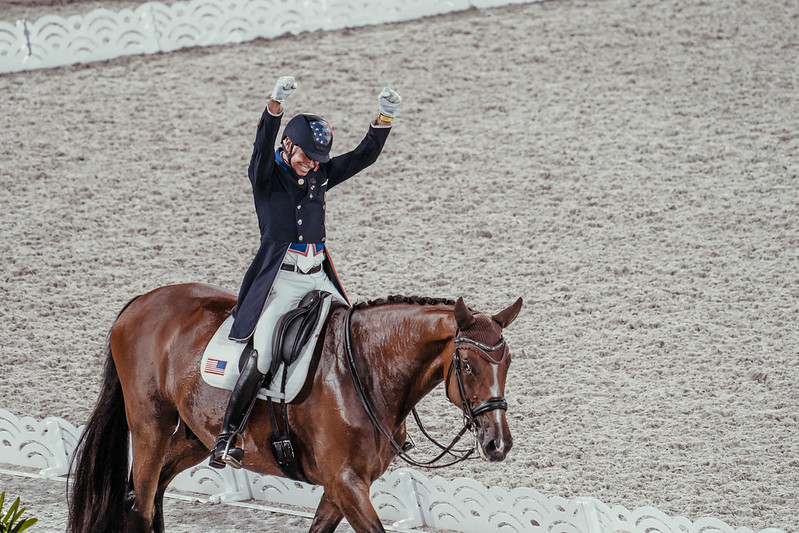 In the second grouping of combinations, Peters (San Diego, Calif.) and Suppenkasper, a 13-year-old KWPN gelding owned by Akiko Yamazaki and Four Winds Farm, rode one of their best tests to date and earned a superb score, improving from their test on Sunday in the team qualifier competition.

“This is exactly what I wanted for my team. It’s one thing to ride individually, but when you pull a good score for your team it’s an incredible feeling. When we came out of the arena, I gave Mopsie a big hug and thanked him from the bottom of my heart,” said Peters. “We were seriously in the zone. When we were out there about to go in the ring, I said, ‘Mopsie, please just do what we just did out here in warm-up,’ and we had a good schooling this morning. He did that for me when it counted and it’s an incredible feeling when a horse will fight for you like that in the arena.” 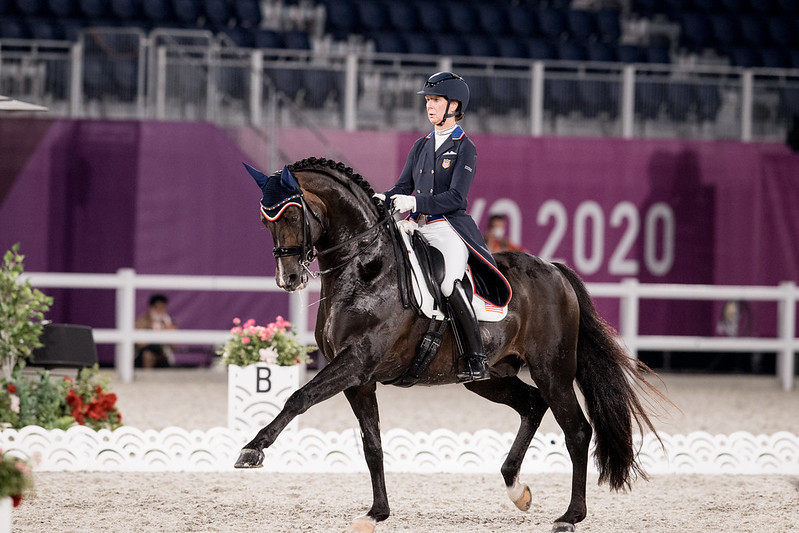 As the anchor combination for the team, Schut-Kery (Napa, Calif.) and Sanceo, a 15-year-old Hanoverian stallion owned by Alice Womble, rounded out the team’s effort with another stellar performance and personal best. The duo, who made their presence known in their first outing on Saturday, returned with another strong performance for the U.S. Dressage Team, helping them to clinch their second-place finish.

“For me, this was my first time here at the Olympics, and it was quite intense to wait that long for the end of the class, but I am so proud of my horse, my team, my owners, and the coaches. It’s been a really, really great experience and I am still a bit speechless,” said Schut-Kery. “I was filled with joy and pride. It’s such a team effort. It’s a big relief to deliver for the whole team, not just my teammates, but everyone involved, and it just meant everything. It was just pure happiness.” 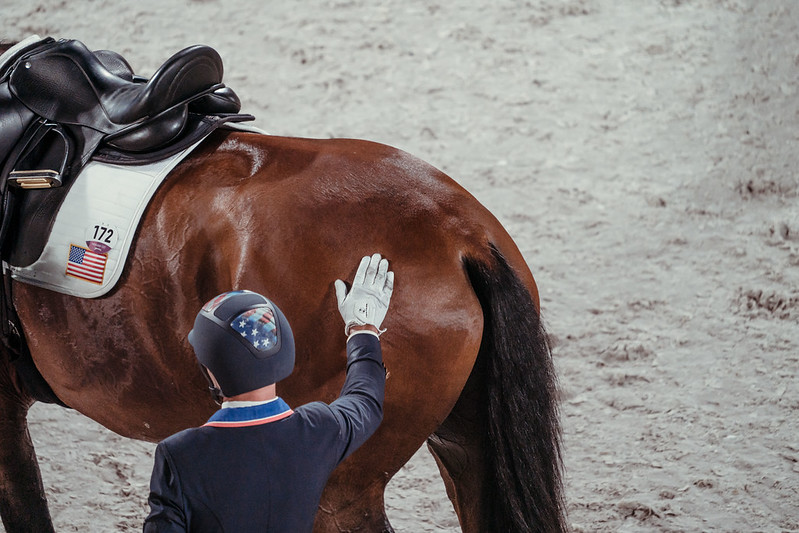 “I am just so proud of this team. This is truly the dream team,” said McDonald. “They each persevered and delivered when their team needed them most. I am so elated by their accomplishment tonight, and wow, what a moment to be remembered for this program. We’ll be back tomorrow and ready for our last competition of this journey, which I am so proud to be a part of, and I have to thank all of the amazing coaches, support staff, and owners, as this wouldn’t have been possible without their dedication and unwavering commitment to our athletes and their horses.” 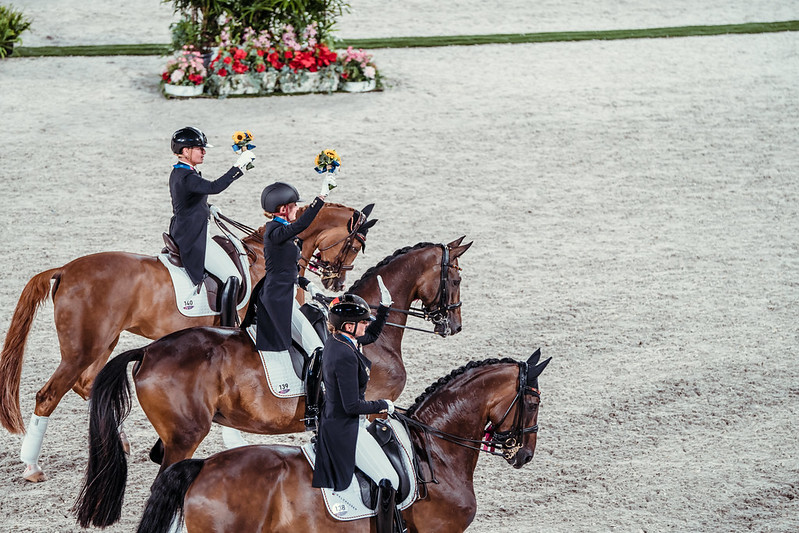 Germany’s Werth was asked about her expectations coming to Tokyo in light of the long and dominant German record at Olympic Games. “We are long enough in this sport to know that one horse can make a difference, and one situation can make a difference, especially when you are only three on a team and you have no reserve. We came with a lot of self-confidence because we knew if we bring our performance in the arena like we can then it would be really hard to beat us, but you never know. One bad day or a sick horse or after such a long trip everything is possible”, she replied.

That’s one more gold medal for the German superwoman who, as former Eventing star/turned commentator Lucinda Green pointed out on Sunday night, is wearing riding boots that been around a while and seen a lot of action….

“I’ve had them since 1991 and I’ve worn them at every Championship since then — they are my lucky boots!”, the German superstar admitted. That’s 30 years of service, with many golden moments along the way, and Lady Luckyboots may well be about to make more history.

Today brought her Olympic gold medal tally to seven, and if Werth can add one more in tomorrow’s much-anticipated Freestyle for the Individual title then she will match the German record set by rower, Birgit Fischer, who has won 8 gold and 4 silver Olympic medals during her sparkling career.

The Second Horse Inspection will take place at 10:30 a.m. JST/9:30 p.m. EDT and the FEI Grand Prix Freestyle for Individual Medals will begin at 5:30 p.m. JST/4:30 a.m. EDT on Wednesday, July 28. The order-of-go will be announced tomorrow morning. Official results can be found here.

Germany were the defending champions coming to the Tokyo 2020 Olympic Games and two of tonight’s winning team members were in the side that reigned supreme at the Rio 2016 Games. Dorothee Schneider riding the same horse, Showtime and Isabell Werth riding her other great mare Weihegold.

Want to stay in the know with all things Olympic eventing? We’re getting ready to kick off daily editions of our Olympic Digest starting Wednesday, July 28. You can sign up for free right here.