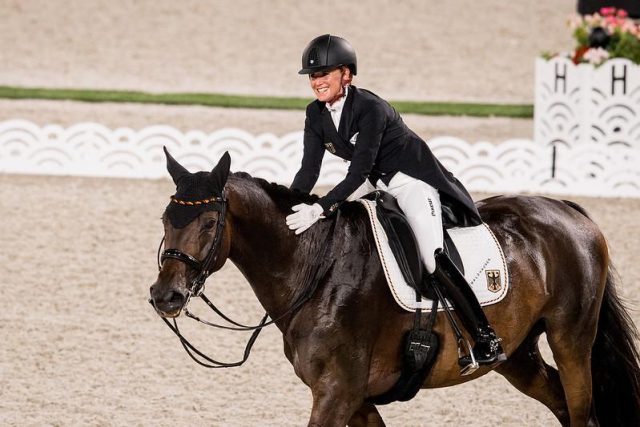 It may have been a long time coming, but the opening day of Equestrian Dressage at the Tokyo 2020 Olympic Games more than lived up to expectations. Emotions ran high and so did the scores with superb individual performances. Here’s a recap of day 2. 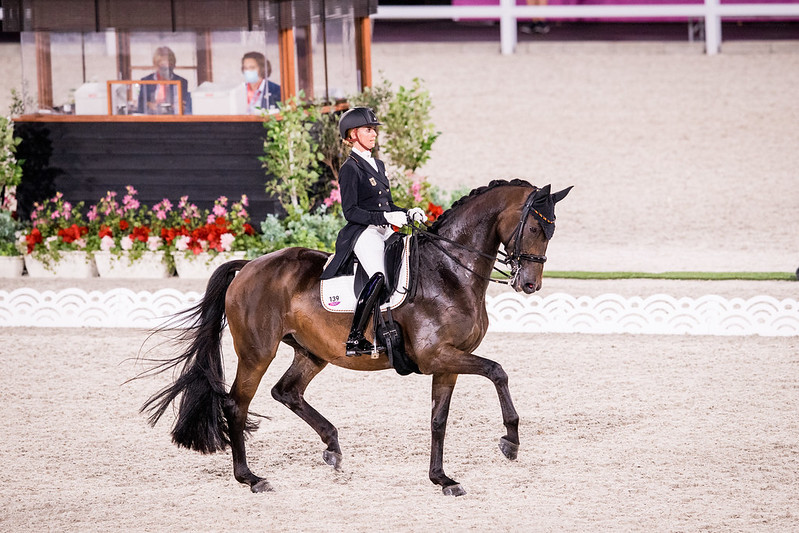 It may have been a long time coming, but the opening day of Equestrian Dressage at the Tokyo 2020 Olympic Games more than lived up to expectations. Emotions ran high and so did the scores as superb individual performances saw The Netherlands take the early lead in the battle for the Team title, while Germany’s Jessica von Bredow-Werndl set a personal-best when posting the biggest mark of the evening with TSF Dalera.

The Grand Prix continues tomorrow when another 30 horse-and-rider combinations take their turn. And if Dorothee Schneider (Showtime) and Isabell Werth (Bella Rose) can come anyway close to the score achieved by compatriot von Bredow-Werndl then Germany looks well on the way to securing the Olympic Dressage Team title for a fabulous 14th time. 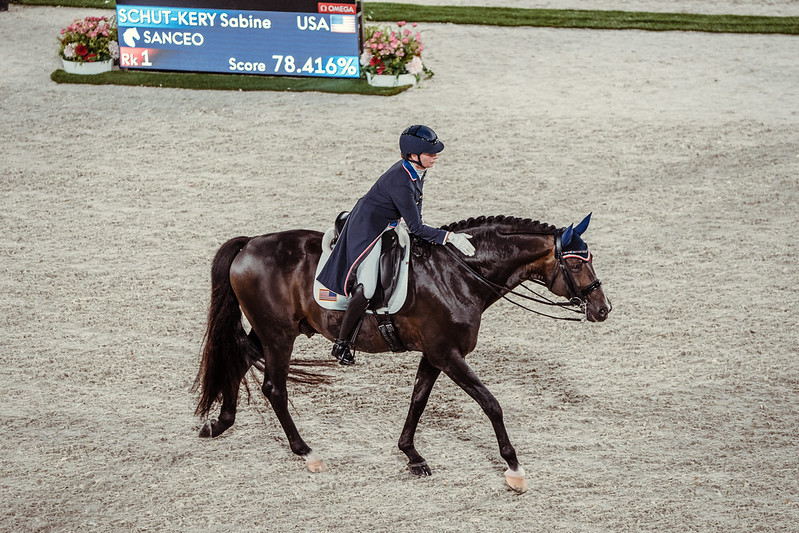 Sabine Schut-Kery (Napa, Calif.) and Sanceo, a 15-year-old Hanoverian stallion owned by Alice Womble, were the first U.S. combination to ride down the centerline at the Olympic Games Tokyo 2020 at Equestrian Park, completing their FEI Grand Prix Test as part of Group C on the first day of competition. Schut-Kery and Sanceo received a 78.416 percent from the ground jury, a personal best in FEI competition, placing the U.S. in a strong position looking ahead to the second day of competition. Fourteen teams are vying to finish in the top eight at the conclusion of tomorrow’s competition in order to qualify for the FEI Grand Prix Special for Team Medals on Tuesday, July 27.

Schut-Kery has developed a strong partnership with Sanceo over the last 12 years, having acquired the stallion as a young three-year old from Europe and developing him herself up through the international levels. This is the pair’s first Olympic Games, though they have competed in a championship environment before as part of the gold-medal winning team at the Pan American Games Toronto 2015.

“He’s always just so with me. It really feels like a partnership, absolutely. You go in there and he gives you that feeling like ‘I’ve got it,’ and then he also likes going into that venue. He definitely puffed up a little bit,” smiled Schut-Kery as she talked about her incredible Olympic debut. “The highlights to me, and it always feels amazing, was the piaffe and passage.” 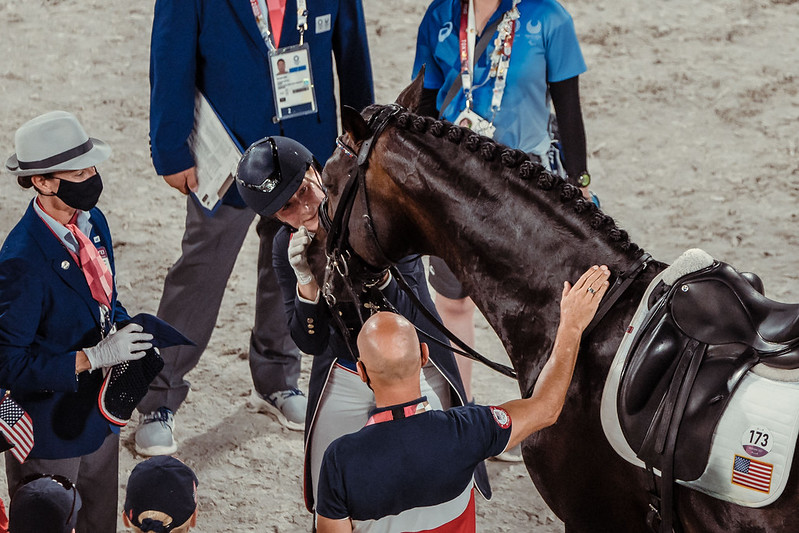 The pair received strong marks from the Ground Jury, as Sanceo excels in his piaffe and passage movements, which were rewarded by the judging panel. Schut-Kery and Sanceo automatically qualified for the FEI Grand Prix Freestyle for Individual Medals on Wednesday, July 28, as they secured second place in Group C behind Jessica von Bredow-Werndl and TSF Dalera, who led the day with an 84.379 percent.

“Coming here, I think, you know, when you come as a team, you don’t ride for yourself anymore, so for me it was really important that I ride for my teammates and ride for my country, and that means all of you, for Christine, for Debbie, and for friends and fans.”

Chef d’Equipe Debbie McDonald was pleased with the test, which provided the team with a positive start with the two remaining pairs to come tomorrow. This is McDonald’s first Olympic Games as Chef d’Equipe, though she is familiar with the intensity of the Olympic Games having competed as an athlete in 2004 and 2008 and serving as the personal coach for athletes in previous years.

“I could not be happier or prouder of Sabine and Sanceo,” said Chef d’Equipe Debbie McDonald. “It was certainly a great way for our team to start this competition and it was truly just a beautiful test from both Sabine and Sanceo.”

The remaining two American combinations will take their turn in the arena at Equestrian Park tomorrow, with Adrienne Lyle and Salvino competing as part of Group D and scheduled for 6:21 p.m. JST / 5:21 a.m. EDT, and Steffen Peters and Suppenkasper in Group F rounding out the competition with the second to last ride of the day at 9:42 p.m. JST / 8:42 a.m. EDT. 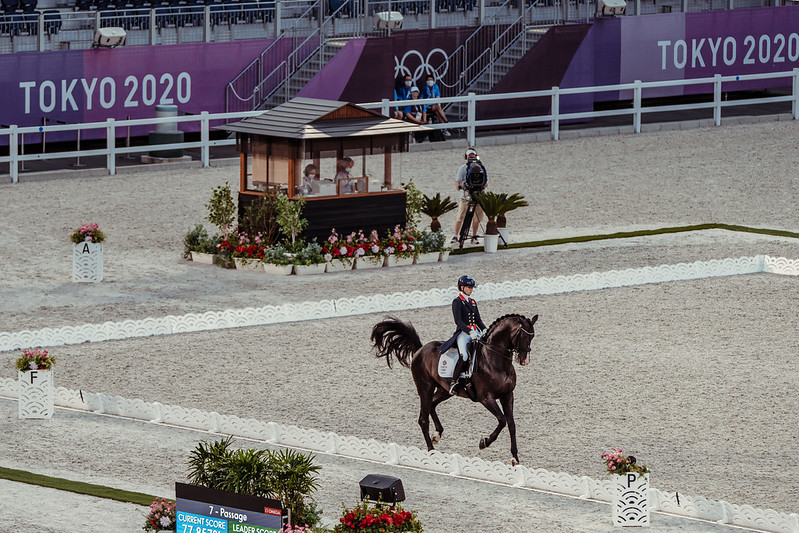 The competition is divided into six groups in total, with three of those groups taking their turn today. The top two athletes from each group, and the six athletes with the next best scores (including ties) will qualify to the individual final (Grand Prix Freestyle). It was Great Britain’s Charlotte Fry and Everdale who set the early target score when posting 77.096 to top Group A.

“At the end he got a shock that there were people watching, he was so concentrating on my ride!,” Charlotte said. “He knew it was a big occasion, he was so concentrated all day, he knew it was coming, he is so intelligent. I’ve been riding him since he was 7 and he’s now 12. I’ve done Young Riders with him and U25 Grand Prix and he’s moved up to Senior Grand Prix in 2019 so we’ve really grown up together and built a really good partnership. He’s fun to ride and I love every day riding him.” 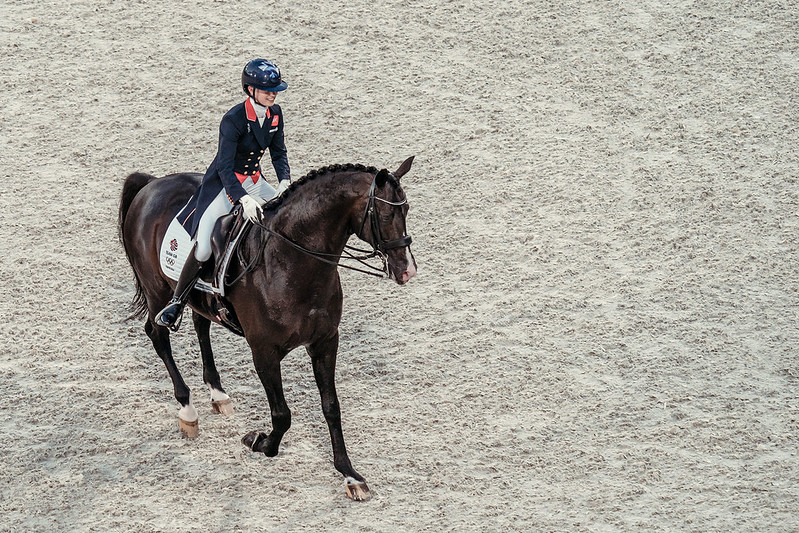 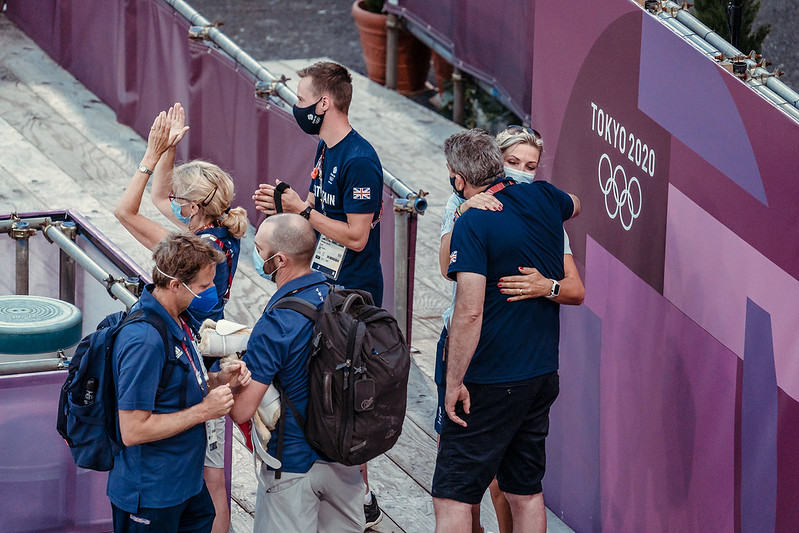 But only two athletes earned marks over 80%, and Denmark’s Cathrine Dufour was the first of these when putting 81.056 on the board with Bohemian to take complete command of Group B. 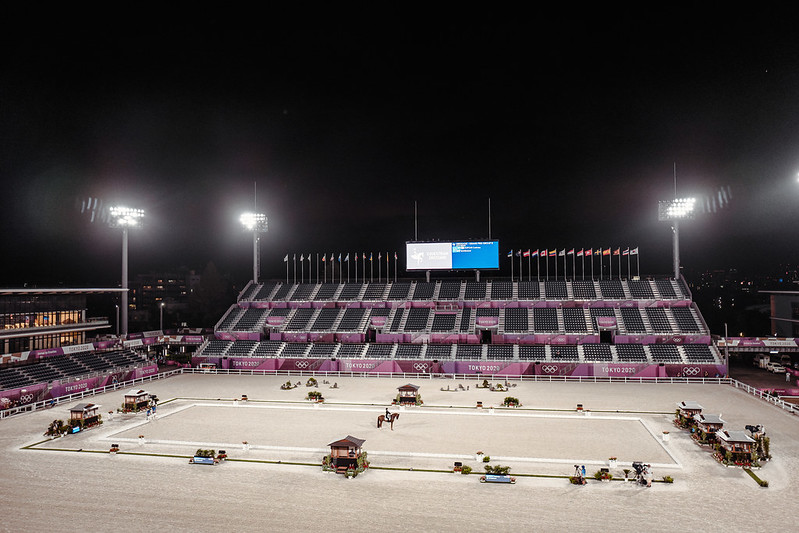 “It was important for me to give him a really great feeling in the ring today,” Dufour said. “I didn’t want to push too much because I wanted him to be comfortable in there. And even though there’s no audience there’s a vibe in the arena and they can feel it!” 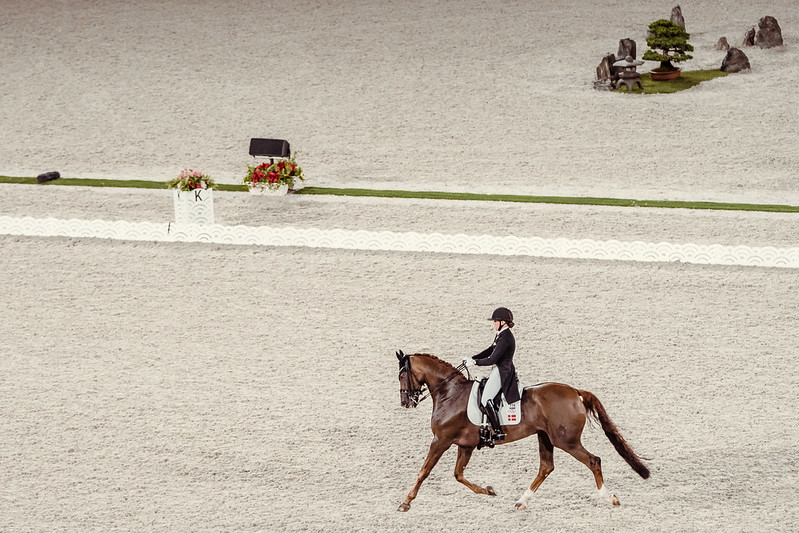 Much of her previous success has been achieved with the diminutive Cassidy who carried her through Junior and Young Rider level to triple-bronze at the Senior European Championships in Gothenburg (SWE) in 2017 and bronze again in the Grand Prix Special at the Europeans in Rotterdam (NED) in 2019. Tonight she admitted she felt a bit guilty about leaving the 18-year-old gelding at home and bringing the 11-year-old Bohemian to Tokyo instead.

“Cassidy has been my partner in crime for 11 years so I felt a little bit like I was cheating on him!” But she feels Bohemian is “one of the best horses in the world! He doesn’t have any weaknesses.” 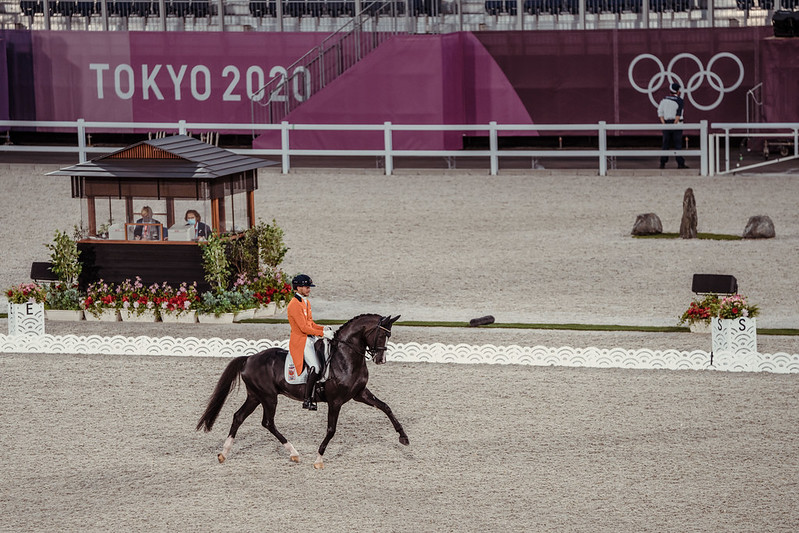 Edward Gal (NED) with Total Us. Photo by FEI/Christophe Taniere.

Meanwhile Edward Gal’s score of 78.649 left him second in Group B and gave The Netherlands a firm basis on which to build their team challenge. His black stallion, Total US is only nine years old, and a son of the great Totilas who, with Gal onboard, set the world of Dressage on fire a decade ago.

“You feel so much comparison, the same feeling when you give your leg, the same reaction. Totilas was more confident at his age – he (Total US) is a bit shy but I’ve done some more competitions with him now and I feel him getting more confident”, said the Dutchman who was sporting an eye-catching new tailcoat.

Previously Dressage riders were only permitted to dress in modest colours, but following a change to those rules the Dutch Dressage team have joined their Jumping counterparts in wearing the brightest of bright orange jackets so they stand out in every sense.

Second-last into the arena tonight, Hans-Peter Minderhoud bolstered the Dutch position with a score of 76.817 with Dream Boy, giving his country the lead going into tomorrow’s second half of the Grand Prix ahead of Denmark in second and Great Britain in third. But some shuffling of positions can well be expected by the end of the second day. 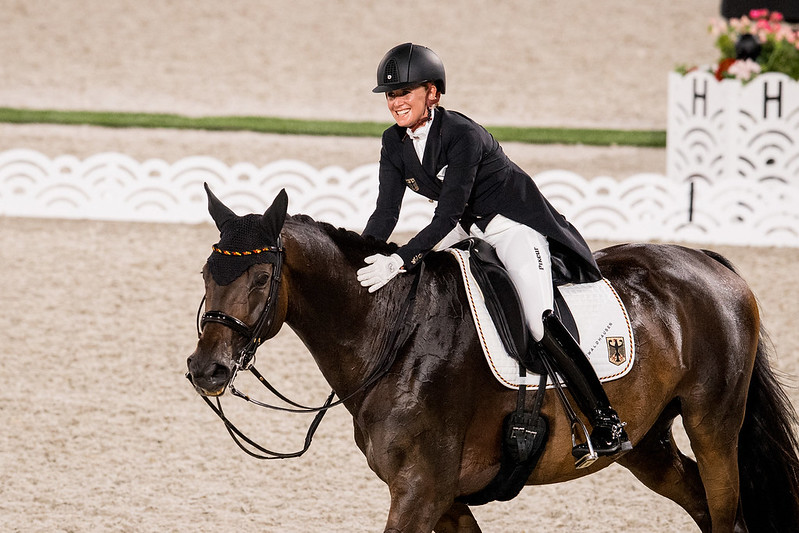 A thrilling test produced by von Bredow-Werndl produced the biggest score of the evening, despite a big spook from Dalera before entering the ring following a rainshower.

“She wasn’t scared, she was just excited by the atmosphere. She didn’t expect it because it was so silent every day here!”, said the German star after posting a massive 84.379.

Talking about how testing it was for the riders as well as the horses in the conditions at Baji Koen Equestrian Park tonight she added, “to be honest I’m very fit, but at the centreline where I started the pirouettes I thought ‘gosh, it’s so exhausting!’ It was so hot in there and the humidity is extreme after the rain. It was tough,” she said. 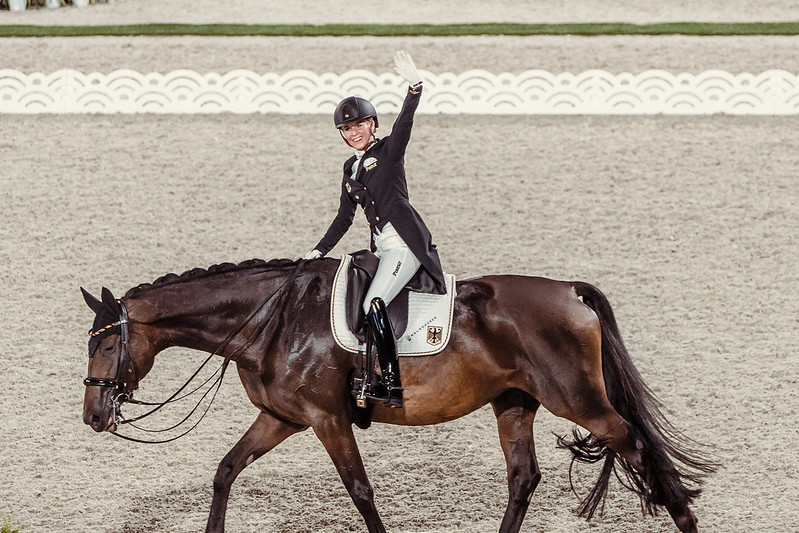 Best two combinations from Group B – Denmark’s Cathrine Dufour and Bohemian with 81.056 and The Netherlands Edward Gal with Total US scoring 78.649.

The number of countries now left in the medal race for the Team title has been reduced from 15 to 14. The withdrawal of Victoria Max-Theurer and Abbegelen NRW leaves Austria without a team. The 11-year-old Abbegelen didn’t start today because he had a toothache.

Guaranteed to advance to the Grand Prix Final (top two in each group):

Want to stay in the know with all things Olympic eventing? Eventing Nation is getting ready to kick off daily editions of its Olympic Digest starting Wednesday, July 28. You can sign up for free right here.