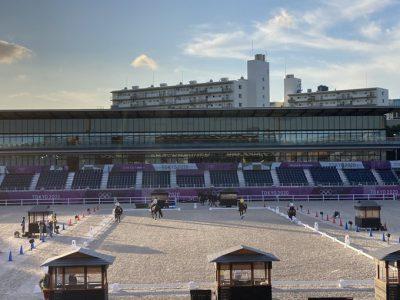 July 23, 2021DeAnn SloanSally Spickard#OLYMPICS, Tokyo OlympicsComments Off on Sneak a Peek Inside the Gorgeous Equestrian Park at the Tokyo Olympics

We’ve got a bird’s eye glimpse at the Tokyo 2020 Equestrian Park, which will play host to the majority of equestrian competitions beginning this weekend with dressage.

Thanks to the video skills of Team Ireland traveling vet Marcus Swail, we’ve got a bigger glimpse of the Equestrian Park venue in Tokyo, which is set to host the majority of competition for the three equestrian disciplines beginning this weekend with dressage. Cross country for the eventing competition will be held on Sea Forest Island, requiring trailer transportation for the horses.

A glimpse at Sea Forest Island from Dr. David Marlin:

Several other stakeholders have been posting glimpses of the competition venue, and we simply can’t get enough:

Nation Media’s own Sally Spickard will  be on the ground in Tokyo beginning July 26, and after a brief isolation period with any luck she’ll be seeing the sights for herself — and sharing them with you! Thanks for following along as we inch closer to the #Tokyo2020.