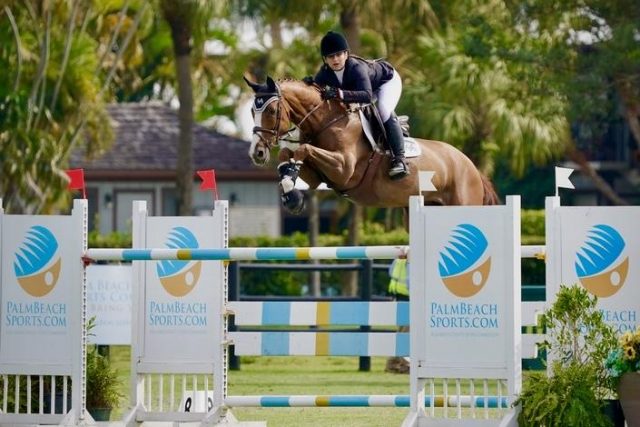 July 21, 2021DeAnn SloanSponsoredHaygainComments Off on To Steam or Not to Steam? 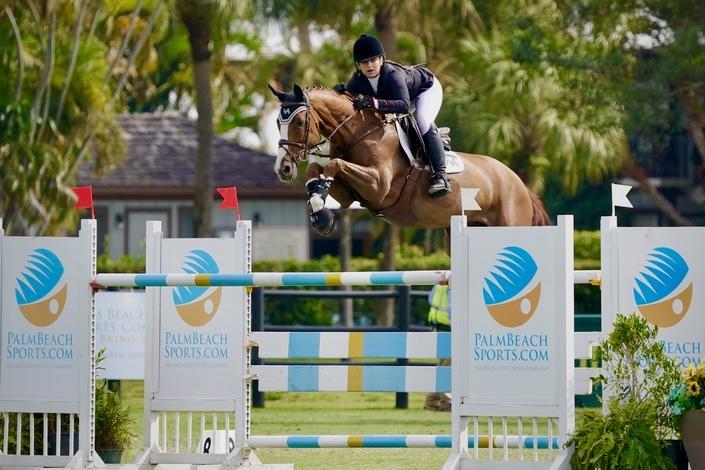 This is a “will they, won’t they” Ross and Rachel type love story, featuring me and my Haygain Hay Steamer.

The horse industry is difficult in just about every aspect. With constant travel, rotating horses, changes in staff, and, of course, Murphy’s Law, it’s a challenge just to stick to a schedule.

Ensuring my horses have the best care possible is my #1 priority, but every part of the horse’s program has to be sustainable and efficient, so we can have the same standard of excellence at home and on the road.

I focus a lot on efficiency and making sure our program has maximum depth but minimal cost — financially and time/energy spent cost! Everything that we do must be done well, so the program has to be as complex as needed and as simple as possible so that nothing gets shortchanged.

This story starts around 7 years ago when I was first introduced to Haygain Hay Steamers. I was in college and keeping my horses at the Land family’s Pinetree farm in Alpahretta, GA. They would steam hay for all the horses in the barn — which smelled amazing — and swore by its nutritional benefits. I bought into the voodoo but didn’t bother to learn the science. (This was the period when I was first really learning horse management, and it was all a little overwhelming.) The next farm I boarded at had never heard of Hay Steaming and it kind of dropped off my radar.

More recently, since I’ve become a professional, Haygain Hay Steamers have become prominent with elite show jumpers, yet I became tentative to invest in one. Honestly, it seemed complicated… It’s large enough to fit full servings of hay for the barn, needs power, water, and to be run manually, and it travels with the horses to shows…Hence, it must 1) cost a fortune, and 2) be complicated.

Now that I’m managing staff, traveling often, and hardly keeping up as it is, I wasn’t compelled to enter a new step into our horse care process. I didn’t doubt the benefits of steamed hay, but I didn’t see a need for it. Anything for the horses, but we can’t quite do everything for them.

Then (cue inciting incident), towards the end of the 2021 WEF season — a rather harrowing season for me — one of my best horses had a random nosebleed incident and was found to have a form of equine asthma.

This is one of my worst nightmares! Eighty-eight percent of horses have some level of Inflammatory Airway Disease, and it is not unusual for horses to have nosebleeds when working in extreme heat and humidity. It’s also something that isn’t tolerable for elite performers – the associated health risks are notable and not something to take lightly.

Enter Haygain steamers: recommended by every veterinarian and rider I spoke to about nosebleeds. Everyone swears by the steamers to help reduce dust in the barn and, consequently, in horses’ nasal passages. It reduces allergens by 99% and the added moisture helps with hydration, digestion, and palatability too.

My Dad (who, like my horse, has dealt with asthma) even did some research and was impressed by the nutritional and overall health benefits associated with Steamed Hay, even vs soaked/wet hay. He put it candidly, “So basically, like, clean hay is healthy. That seems like a no-brainer.” So, I knew that I had to bite the bullet and buy a Haygain, but I was still worried it would be difficult to integrate into our daily program. 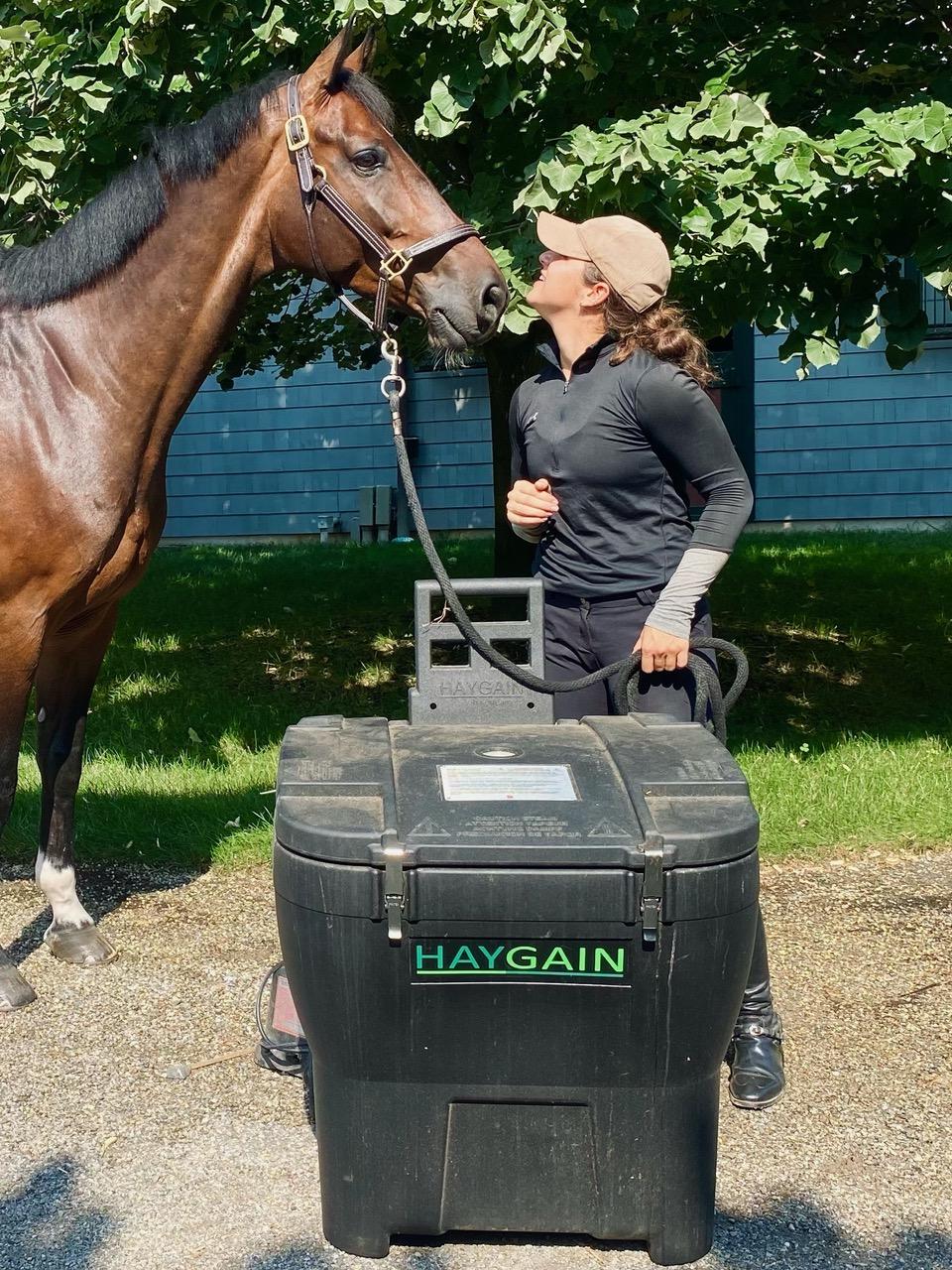 Anyway, I got in touch with a Haygain representative who assured me that the process of steaming the hay is not terrifying, and also that the cost was reasonable (sub $2,000 for the HG 600 model, which is less than half of what I expected, and a lot cheaper than a veterinary diagnosis of inflammatory airways!) Even when the machine arrived, I was intimidated to set it up, which was actually…. so easy.

Ok, maybe this is going to be good.

The whole barn switched over to steamed hay, and the horses all loved it right away. My grooms didn’t have any issues working the machine and it was pretty effortless to integrate into our program. So I was wrong… (And the best part of all is the smell!! I LOVE the smell of the Steamed Hay, it has a delightful baked-bread vibe.)

Around the same time, I had begun to transition my horses to a “more hay – less grain” diet higher in forage and fats and lower in carbohydrates from grain. So, hay quality and quantity became more important to me, and all of sudden I couldn’t imagine life without the steamer. Dry hay became unappetizing to some of the horses and having learned more about the nutritional value of hay, and the nutritional enhancement of steamed hay, I couldn’t imagine life without it.

We moved the unit from Florida to our summer base in New Jersey and it traveled well and is easily portable/packable. When I headed north, due to some unforeseen circumstances, I ended up having 5 horses to ride and care for with no groom for about 2 weeks. That was the biggest test for the machine. As my forte is riding and not barn work, I thought it would a miracle if I could get through even a few days riding, doing barn chores, and steaming the hay without messing anything up — seemed like the first thing I would shortchange to be honest.

On the contrary, however, I ended up becoming absolutely addicted to the steamer. It was my joy to steam the hay and having set times to start and stop steaming helped keep me on task throughout the day. The machine became second nature quickly and was the last thing I’d want to shortchange.

It’s simple, efficient, extremely valuable for the horses, and it’s a low investment of time and energy – exactly the opposite of what I thought. It fits my program perfectly and would fit anyone else’s. I (knock on wood) haven’t had a single equine respiratory issue since acquiring the Haygain steamer, and my horses’ coats, weight, and performance have all been excellent.

The HG 600 works beautifully for me to steam hay for 6 horses who get hay 4x daily. It is a welcome addition to our barn. We see and feel the benefits to the horses’ inside and out. I wish I would have added it to my program sooner, but I think the time spent as a skeptic has only contributed to my passionate love for the Haygain in the end – haha!

With all the volatility in the industry at large, everything to maximize quality and consistency in the barn is a blessing, and I consider the Haygain a massive win for me and my horses!

Author Megan McDermott is a professional international show jumper and trainer whose business is currently based in NJ. She is also on the board of directors of the Sport Horse Research Foundation.