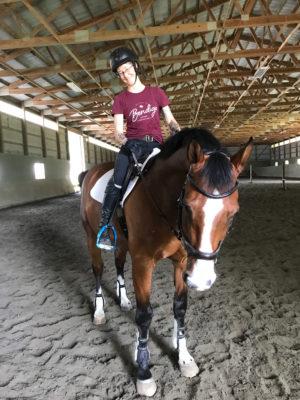 Susan Glover is back with an update on Steve and maintaining hope.

Originally I was going to write something about bringing a horse back into work when it has been off due to injury (or surgery, in our case), but, in all honesty that process is mostly commonsense and is also particular to each horse. My jumper Steve was off for hock surgery for several months and he is a stereotypical warmblood tube, so for us it’s been about slow and steady fitness work. We’re doing well with it, despite the sauna we’ve been living in here in the MidAtlantic, and now we are up to jumping cavalettis and doing fairly advanced lateral work. The Tube is back!

So, yeah, my only advice about conditioning is to listen to your horse, unless he is telling you that standing around eating hay and NOT working is probably better for everyone. This is what Steve has attempted to convey to me, but as he gets more fit he’s also started to enjoy having a job again. Yesterday after our fairly intense flatwork session Steve’s job entailed having a kid walk him around to cool out, which is his FAVORITE sort of ride. Happy child who isn’t asking him to do anything = Steve’s cup of tea. Today we got to play mounted games with the pony campers, since it was either join them or try to dodge them while I rode. Steve was confused and mildly alarmed by all of the commotion at first, but then his competitive spirit came out and we managed to help our team win the tennis ball relay. I have a feeling that mounted games would be a good second career for a jumper. Adjustability and agility? No problem! Steve and me after our mounted pony games, ready to go! I’m laughing because he was angry that the ponies had all left and he was forced to pose for photos. NOT FAIR.

What I have been thinking about along with conditioning and fitness and so on is what is next for us. It’s still early days, only about six weeks under saddle now, but so far, so good. I ran into my vet when he was leaving the barn the other day and he was delighted to hear of our progress, noting again that this surgery has never been done before and Steve is going to be talked about at the vet conferences and isn’t that great? I mean, yes, it is wonderful that this seems to be a successful treatment and I am glad to be helping advance veterinary knowledge with my horse’s freak hock issue. I’m an academic and a researcher and that part of me recognizes how important this positive outcome is for science, but as a rider…well, I just want to be able to jump my horse again and have him be happy and sound.

I have this fear/hope sort of thing going on and it would be really nice to not be the first, and instead to have statistics like: 99% of horses go on to jump grand prix after this very common surgery! Ok, maybe that’s asking for too much, but being on the cutting edge is kind of scary. As I wrote last time, though, the hope part of it keeps us going as riders when our horses try to break themselves, so I’m leaning into it as much as I can. I feel like I’ve been given a second chance with Steve and while the jury is still out as to whether or not he will hold up to jumping, if he does I do not want to waste this gift.

To that end, I have a tiered system of plans. Tier 1 is: make The Tube more fit and less tube-like. Steve is naturally built on…larger lines, let’s say, and is not meant to be thin, but he also isn’t meant to look like he is carrying twins. Tier 1 is going well, and we are up to a good normal session of walk-trot-canter work without me feeling like I’m going to have to carry him back to the barn afterward. I think a visit to Windurra’s galloping track is coming soon, although for us it’s usually closer to a brisk canter. However, if we go out there and are able to keep up with one of the TBs for even half a circuit, I’ll know we are on the right path. Yes, I know that is a really low bar but have I mentioned the tubeness of my horse?

Tier 2 is: get Steve jumping fit. This is a long game because right now he is barely jumping fit for hopping over more than a handful of cavalettis at a time. We’ve been doing a lot of canter-trot-canter transitions, with only a few steps of each in between and in a very collected manner, and this is really helping muscle up his hind end again. But jumping, even over low stuff like cavalettis or a row of trot poles on the ground, is actually quite a bit harder. It gets more tricky when your rider is mean and doesn’t let you just flail around on the forehand taking long spots and instead makes you sit and jump up. The other day we did a longish two stride to a very tight four and Steve was 100% sure that it would be more appropriate just to jump the two and roll along to a big three with his nose poked out. “What do you mean, sit on my butt and jump off my hocks? What is this, the Gulag?” We did this line of three tiny (TINY!) jumps maybe four times and by the last one I could feel his tires go flat behind. So, yeah, Tier 2 is a long game, but the end of it will be confidently jumping big courses at home, ideally with a bit less huffing and puffing.

Tier 3 is: get back to the show ring. Way back in mid-2019 we were doing the Low AO Jumpers and then everything fell apart (first with his leg and then with the world), so Tier 3 will certainly see us go down a level or two at the start. Getting back to the second chance thing, though, my long game here is to get up to the Low AOs, do well there until we are bored, and then keep going up the levels. My horse’s scope has never really been tested past 1.45m and that was easy for him, so who knows where we will get?

If we achieve Tier 3 it’s primarily going to be about enjoying competing on my horse, but he’s one of the best I’ve ever sat on and so I’m going to dream big. Why not? A couple of months ago I wasn’t sure I’d even get to ride him again, so why not shoot as high as we can? I’m just an ammy who sometimes makes extremely ammy decisions to the jump, but if I have the opportunity to reach higher with Steve I’m going to take it.

For now, though, the focus is fitness. That isn’t as exciting as jumping a big oxer, but every time I climb onto Steve and have the joy of feeling him swinging along under me I feel grateful. Wish us luck as we go down this road and send some sympathy to my tube, who thinks fitness training is for suckers and Thoroughbreds. If our grunt work is successful we can get back to what we both enjoy: jumping all the things. Until then, see you on the galloping track. We’ll be the ones huffing and puffing while the event horses breeze past, but I’ll have a smile on my face!