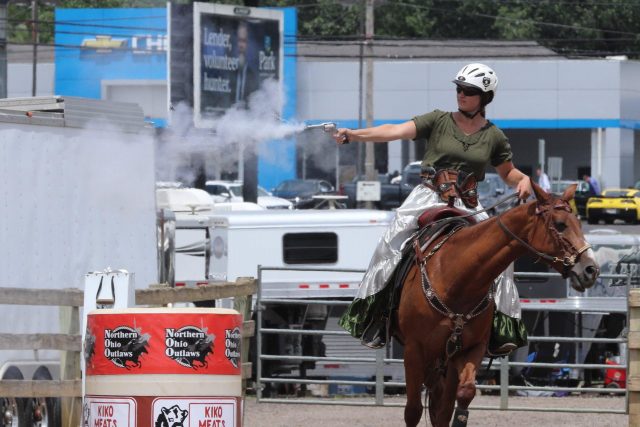 Brianna has officially introduced Delaware to gunfire. It’s safe to say they’re both having a blast.

Earlier this spring, we introduced Horse Nation readers to the Appalachian Trainer Face Off (ATFO), a training competition “that leads to a better view of what horse rescue means, what adoption should look like and how the horse industry can … help horses in a meaningful way.” The training period takes place over the course of 100 days and culminates in a competition from Thursday, August 19 through Saturday, August 21, 2021 in Winfield, West Virginia. Throughout the course of the retraining period and competition, we will be following the journey of amateur trainer Brianna Ivory and her ATFO horse Delaware. You can catch up on the previous pieces in this series here. 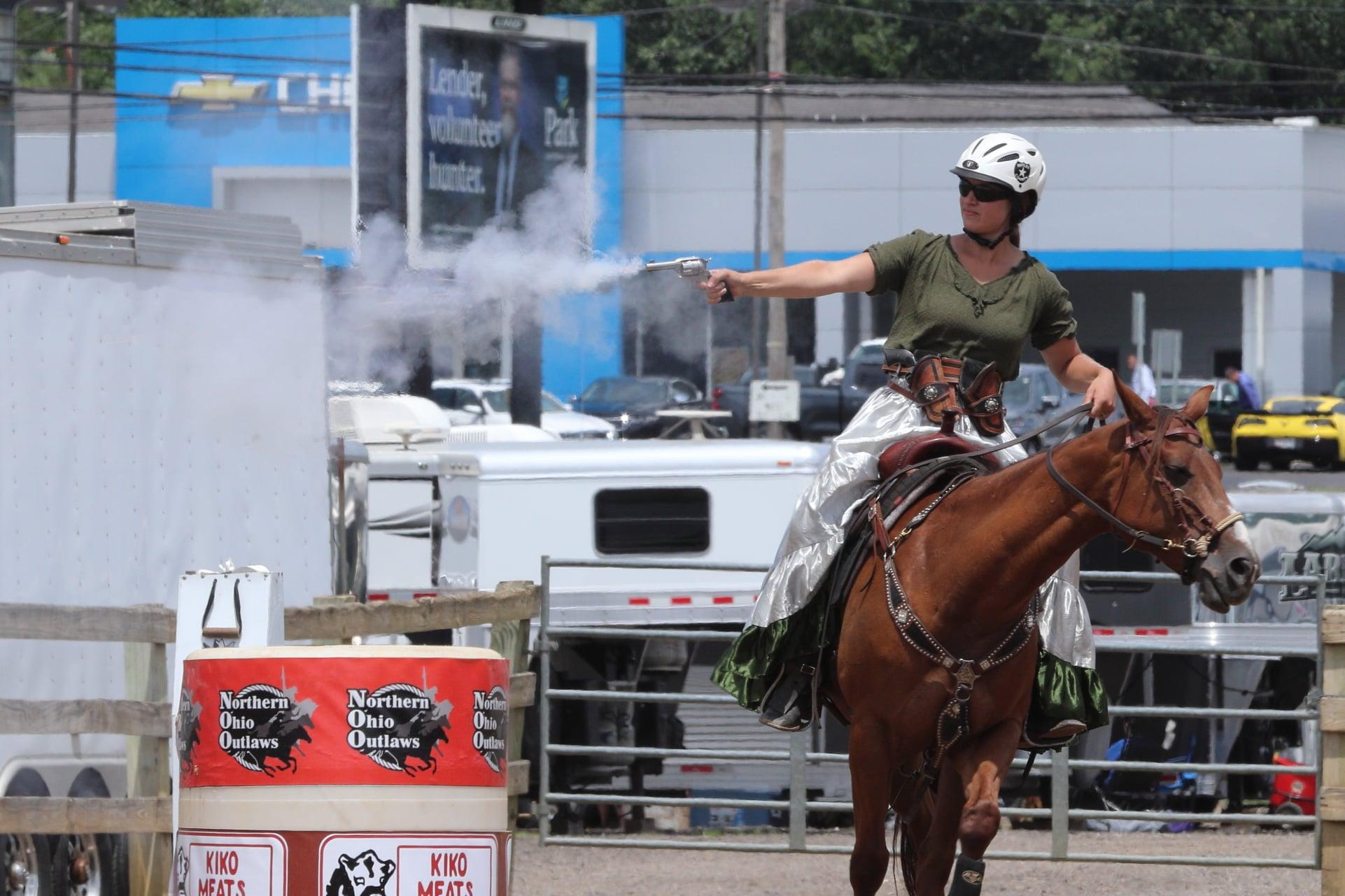 From the moment Brianna Ivory found out she was accepted to compete in the ATFO, she said, “This horse is going to be exposed to everything.” She wasn’t kidding. From trails to trick riding to obstacles to ranch riding to mounted shooting (and other exciting events yet to come), Delaware will make her way to West Virginia having seen and done more in 100 days than most horses do in their lifetimes.

One of the primary aspects of this exposure — and of Brianna’s riding — is mounted shooting. Brianna is a CMSA Ladies Level 5, so much of her training program (at least for her personal horses) revolves around acclimation to gunfire and pattern negotiation. This is no different for Delaware.

Once Brianna had Delaware started under saddle, she wasted no time in introducing her to gunfire — she even had some help from her her soon-to-be stepdaughter, Lizzy. Lizzy wanted to help train Delaware, so she got the honors of firing the cap gun as Delaware’s introduction to shooting (sort of).

From there, Brianna moved on by taking Delaware to an environment that would offer repetition along with the security of having seasoned horses present. They ventured to a mounted shooting practice, where Delaware helped set balloons and watched other horses and riders run and shoot. 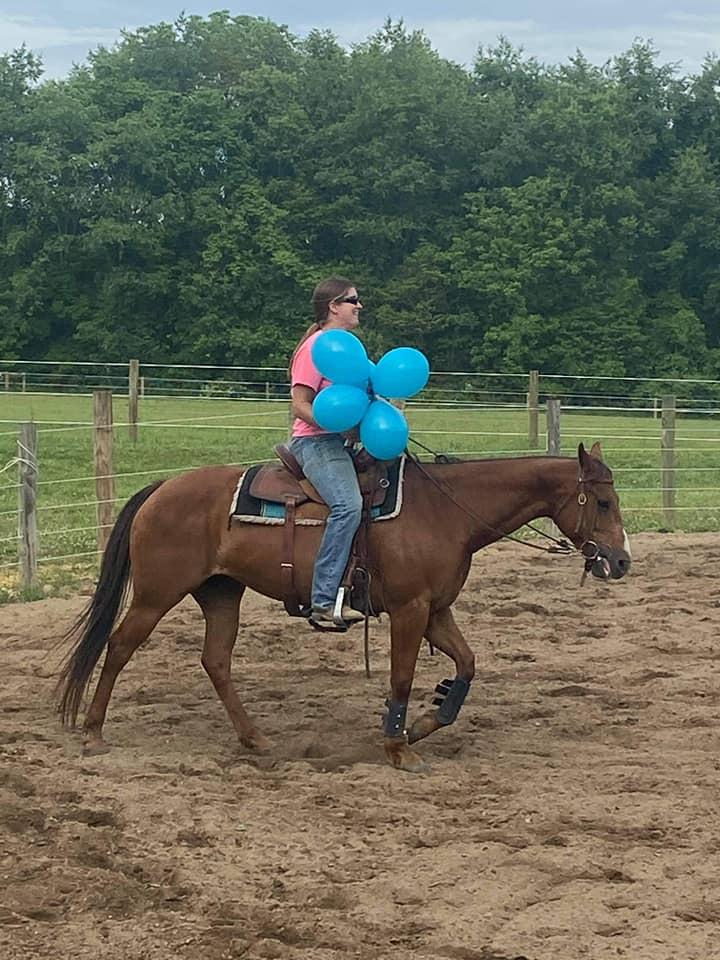 Since so much of Delaware’s training has been focused on exposure, a big part of that is hauling to new locations. Mounted shooting aside, Brianna has made a point to take Delaware to as many places as possible so that she will be ready for a life that might entail trail riding, competing, or any number of things. One of the first big trips Delaware went on with Brianna was to a mounted shooting competition on the other side of the state.

The East Coast Outlaws hosted two consecutive shoots over the course of a weekend, so Delaware got to haul across the state and spend three nights in Bloomsburg, PA. Not only did she settle in well, but she handled the travel, having numerous horses around her and riding in a large arena like an old pro.

It must be noted that even though Brianna wants to make sure Delaware sees as much as possible, she is cognizant of not throwing too much at the horse at once. In each new situation, Brianna gauges Delaware’s reactions and only takes the next step if the mare seems ready and willing. Fortunately, Delaware has a great brain and seems open to a variety of experiences. 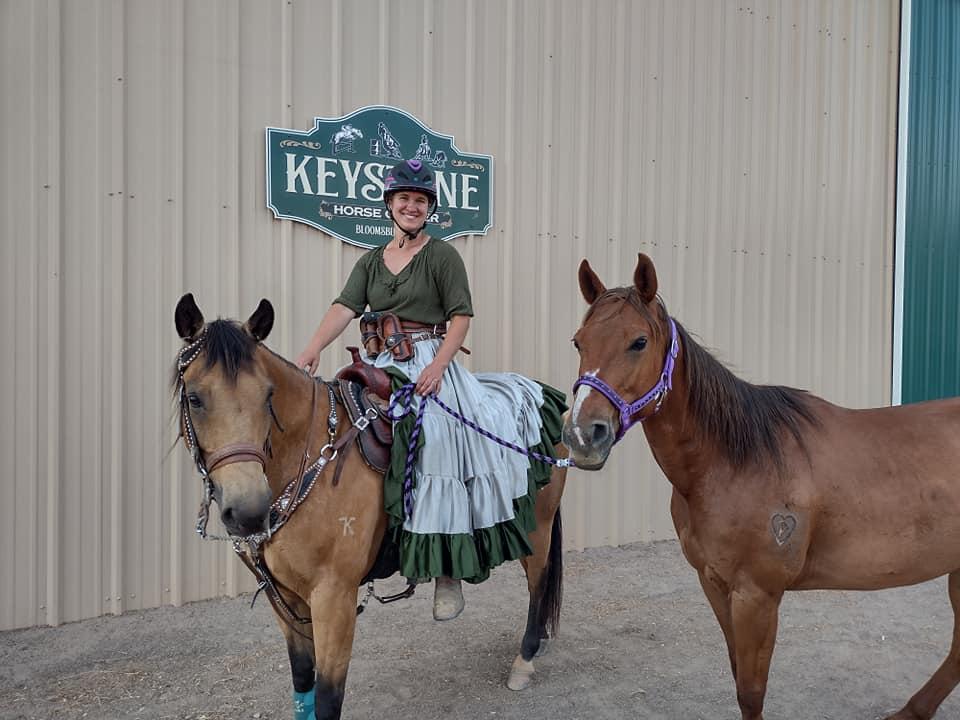 In between stages, Brianna would pony Delaware around the grounds of the Keystone Horse Center. Photo courtesy of Brianna Ivory. 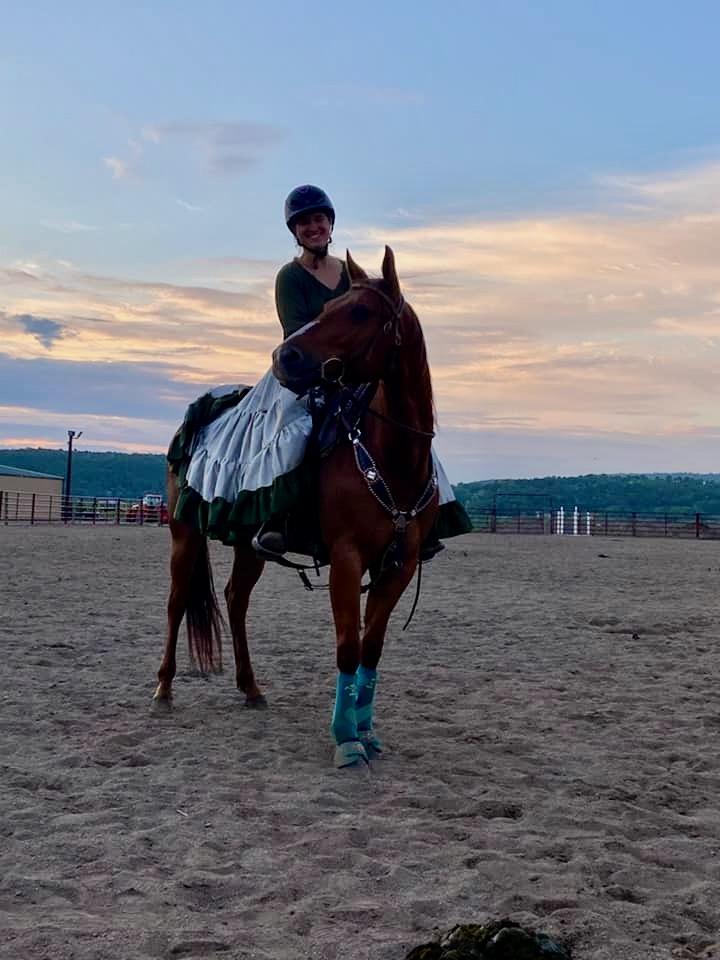 After the shooting was done, Brianna saddled up Delaware and rode her around the facility. Photo courtesy of Brianna Ivory.

After taking Delaware to her first mounted shooting competition simply for the experience, Brianna returned to another practice in order to see how Delaware would respond to having a gun fired from her back. As with most things she has seen, Delaware took it all in stride.

Of shooting off of Delaware, Brianna says, “The first time shooting, I used the normal starting technique of shooting behind the horse’s hip, but she didn’t even react. The second shot was the same. She finished an entire pattern while walking with no reaction whatsoever. Delaware doesn’t mind gunfire at all, but slow is her speed.”

Delaware’s response to gunfire is not typical. Most horses, at some point, react to it. If they don’t react specifically to the guns, they react to the balloons popping or other stimuli that accompany shooting. Delaware keeps exhibiting how great her brain is with her steady-eddie personality.

Since Delaware had shown that she was ready for the next step, last weekend Brianna decided it was time for Delaware to make her mounted shooting debut at Northern Ohio Outlaws Let Freedom Ring shoot in Wooster, OH.

Brianna was competing in the main match with her mare Ziggy, but rode Delaware in the exhibition stages. Delaware, of course, was a rockstar.

Delaware wasn’t the only Heart of Phoenix horse at the shoot. Adam Black was riding Rapunzel, another horse that will be competing at the ATFO and available for adoption. 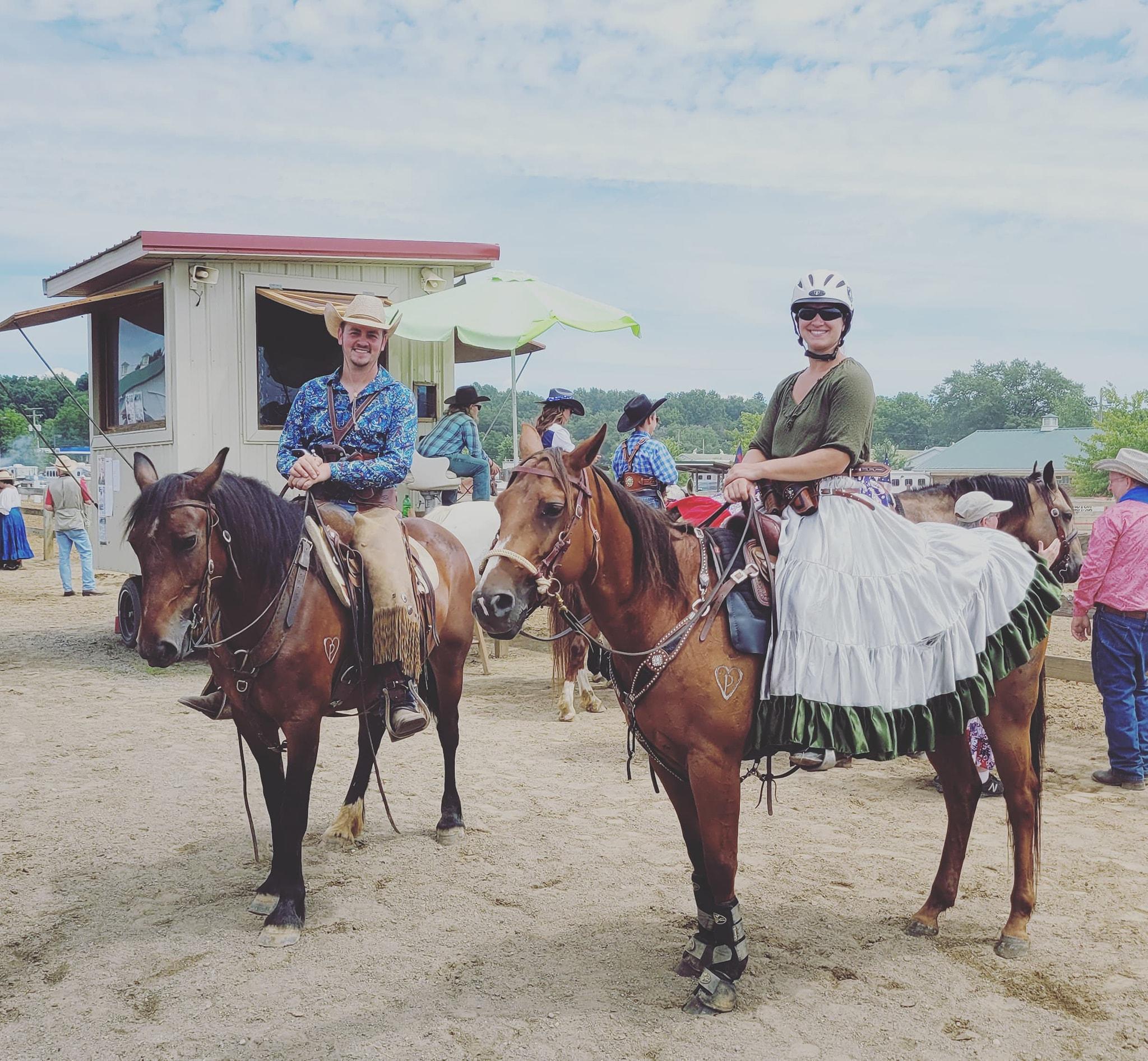 Brianna and Delaware are well on their way to competing at the ATFO. Delaware is learning more each day and is sure to excel in her next home. We will continue to follow along on their journey up until and through the competition. You can read updates each week — we can’t wait to share Delaware’s progress.

If you would like to support Brianna and Delaware on their ATFO journey, you can do so through a variety of channels. Brianna has created an Amazon wish list for Delaware and cash donations can be made via PayPal. If you would like to make a tax deductible cash donation, you can do so through Heart of Phoenix by sending it through PayPal to [email protected] — just put in the notes that it is for Delaware and Brianna. You can also send donations directly to Brianna. For more information on how to do so, email [email protected]. Put ATFO Donation in the subject line.