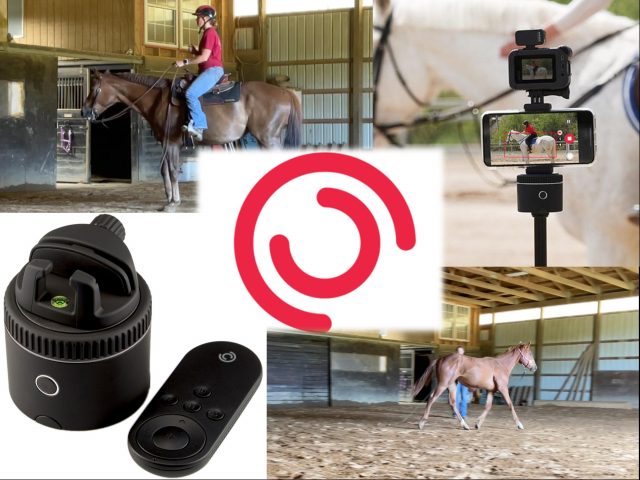 I had the opportunity to get my hands on a Pivo and review it for the equestrian community at large. The TL;DR? Get a Pivo. It’s awesome.

I won’t lie. I’ve been eyeing up the Pivo for months… possibly longer. For the most part, my desire for the automated cameraperson that makes “your smartphone smarter” was something that just sort of sat in the back of my mind — until those days when I was trying to film myself riding. I have a small indoor arena, so filming with a traditional stationary camera set up shouldn’t be that hard (in theory). However, every time I set it up, I was always faced with the same issues: portions of the ride being cut off due to camera placement, weird angles that mostly managed to film my horse’s feet or the top of my head and awkward footage of me looking down at the camera to start or stop it. Granted, this final issue easily can be edited, but let’s get real. No one likes that extreme close up view up their nostrils or of their neck/chin, chest and/or belly. I mean, that angle makes even the fittest of us (which I am not) shudder as we wonder, “Is THAT what I look like?” 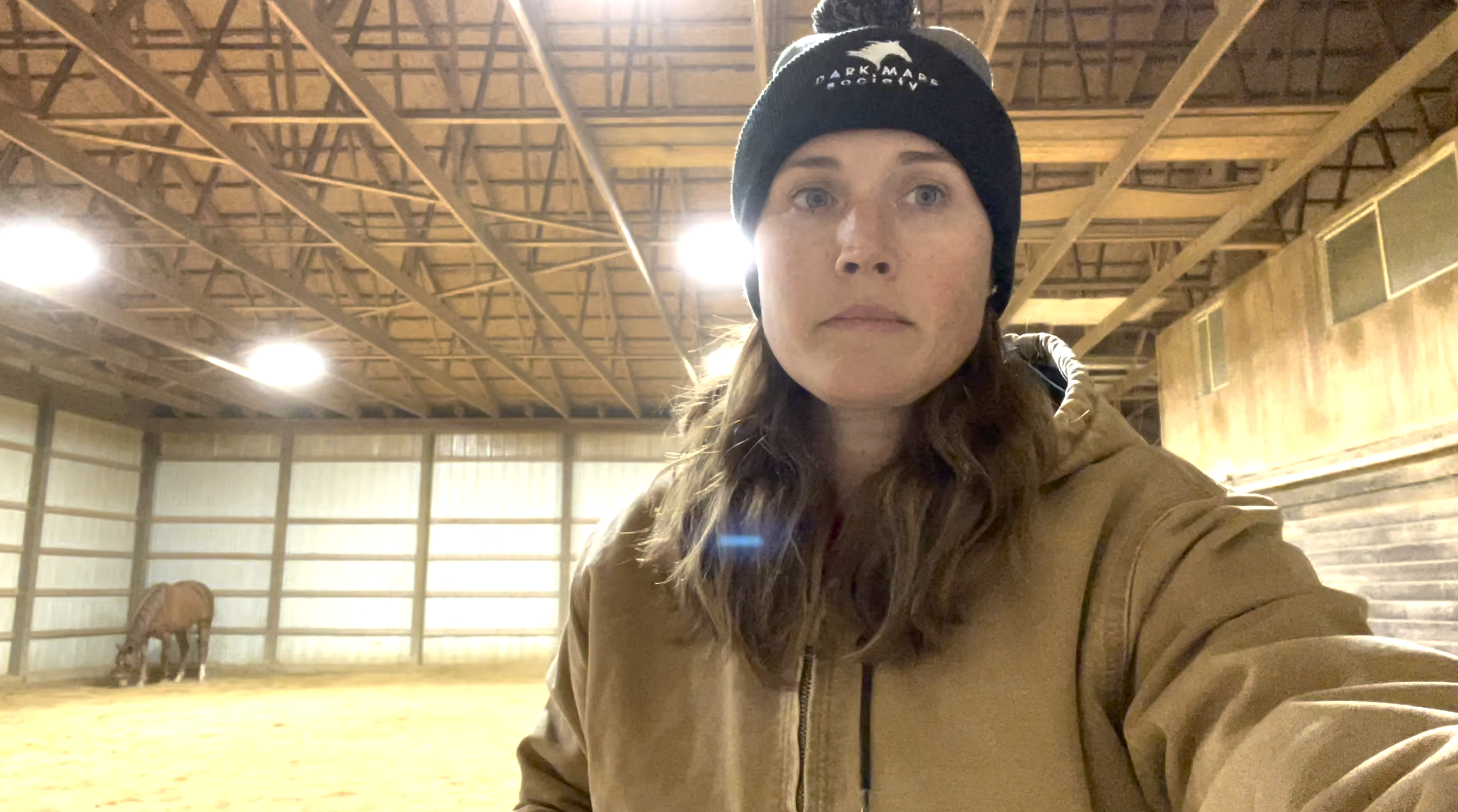 For real, though. How many of our videos start and end like this? Video still from DeAnn Long Sloan.

My jealousy of those who had a Pivo only increased when I accidentally joined the Pivo Horse Riding Community Facebook page (I know, I know — generally one doesn’t accidentally join anything, but I have no recollection of how I stumbled across this page or joining, so I maintain it was accidental). Seeing videos like the one below only made me covet the product more:

(To be clear, neither my horse nor I move like this.)

So, I was thrilled (I cannot emphasize this enough — thrilled) to get my hands on one and be able to offer a review. I sent this photo to multiple friends when it arrived: 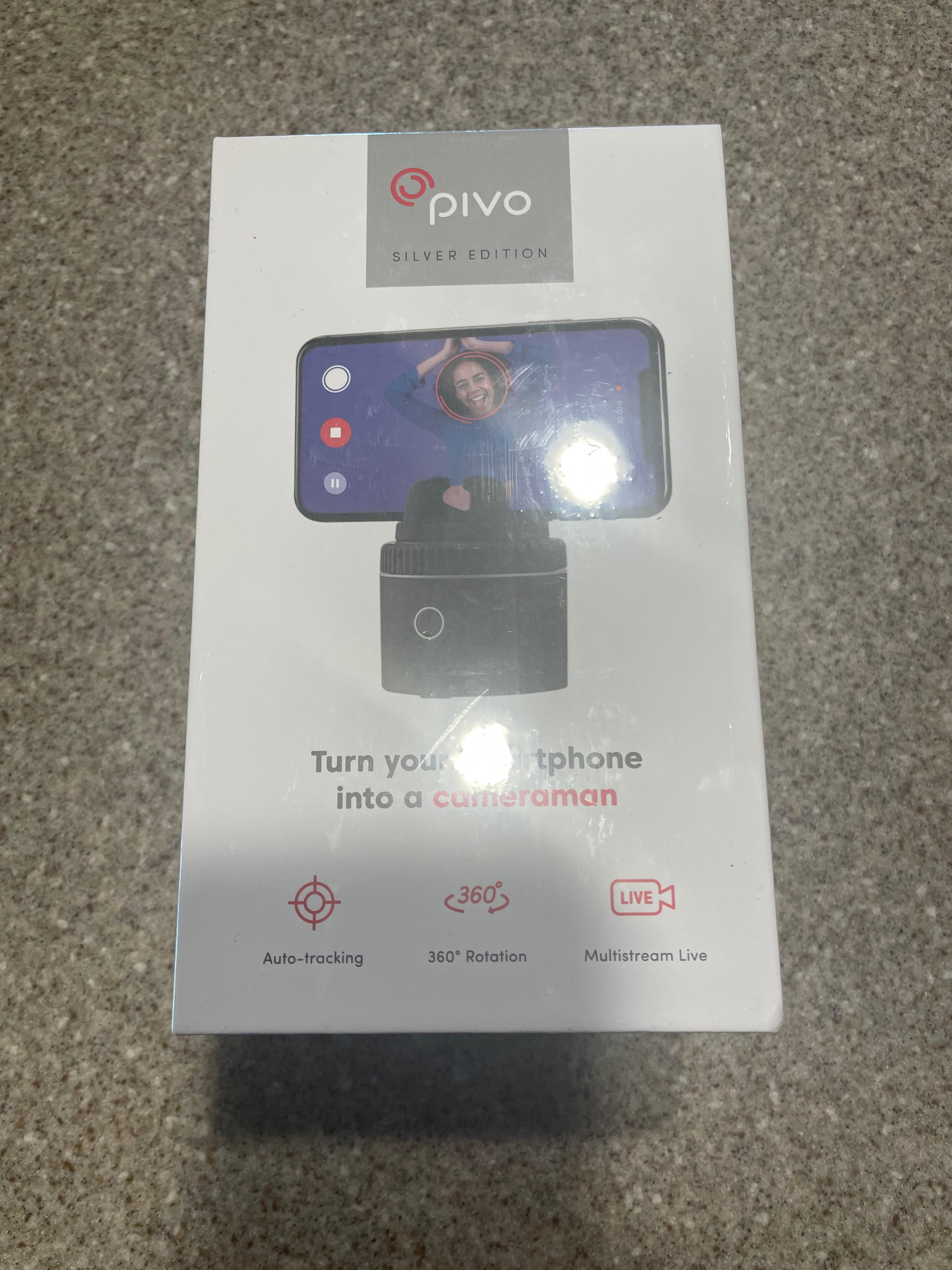 First, I have to admit that I carried the unopened Pivo around in my truck for quite a while. Whenever I get a new product, I always think I am going to wait to make sure I have time to really understand it before I start playing with it. Basically, I drag my feet despite the thrill of playing with a new toy. I don’t know why. Maybe it’s anxiety about screwing it up or having set up be more complicated than I am prepared for.

This is not something I should have worried about. The Pivo was incredibly easy to set up. Basically, install the app, pair the phone and go. And if that seems too complicated, Pivo has an awesome YouTube channel with short, accessible videos like these:

To be clear, I’m not normally a fan of YouTube how-to videos. I much prefer to read instructions. But even I, with my horribly short attention span and inability to watch videos of other people showing me how to do things, found these straightforward and accessible. The channel also offers videos on setting up more advanced features (like how to film your equestrian videos!).

When it actually came time for me to use my Pivo, I was really pleased with how quickly I was able to have it up and running. It charged quickly and the actual set up was fast — probably less than five minutes. The company does everything in its power to make set up and usage as dummy proof as possible. Usually I am pretty good at meandering my way through difficult-to-navigate software, but I recognize that is not the case for most. Therefore I appreciate when companies take the time to make their software as intuitive as possible. Pivo does just that. The app itself has a quick tutorial that walks you through the settings and shows you how to use the remote. (Did you catch that folks? A remote! That means no more awkward footage of your chest.)

Also, there is a literal horse tracking mode (clearly, Pivo realized the potential for equestrians and ran with it). 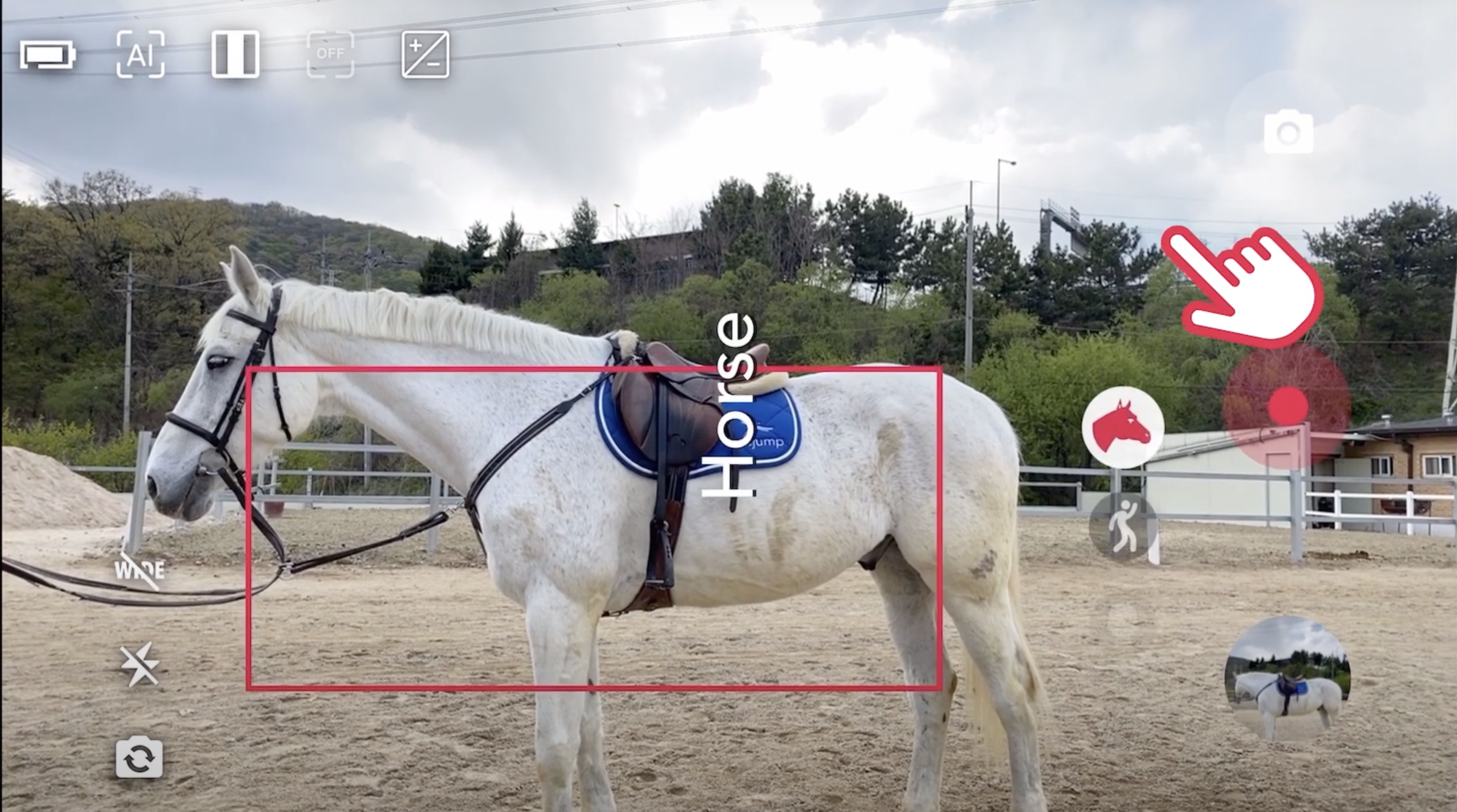 I first decided to try out the Pivo while working with my yearling filly (GETTINKNUDEFORMOOLAH, aka Jo). Let me be clear: filming conditions were not ideal. Despite all my procrastinating so that I could “really understand the product before I used it,” I propped up the Pivo on a barrel in the corner of the arena, chose the horse tracking more and hit start.

There were a few minor glitches with this use of the Pivo, but those were due to use error and not the product itself. I am certain I did not choose the correct speed setting. In fact, I did not choose any speed setting. I started recording with whatever the default settings were. As a result, the camera tracking isn’t smooth when Jo is cantering. Lesson learned.

However, as I became more comfortable with the device and its settings, the smoother filming went. I’ve even gotten over looking at it every 30 seconds to make sure it’s on. 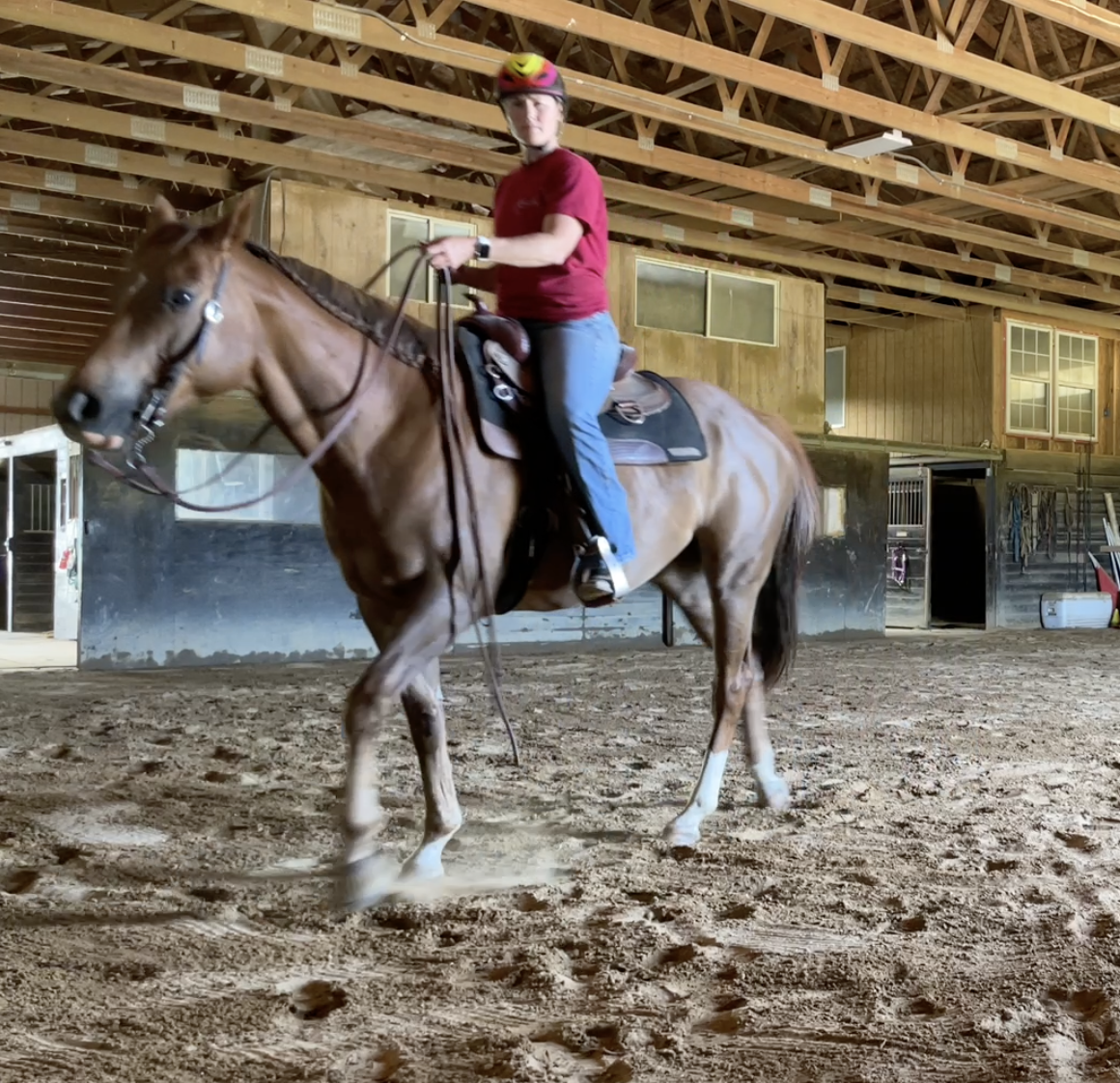 Note my look of confusion as I mean-mug the Pivo to make sure it is on and working. Still shot by DeAnn Long Sloan.

Throughout my time with the Pivo, friends have used it and, other than a small learning curve, everyone is enjoying it, experiencing a fair amount of success and appreciating the ease with which it films and can be used.

Speaking of learning curves, definitely make sure that when you use it and put it on horse tracking mode that the red square is on the horse you want to film. When I ride my mare (Rightful Goddess, aka Mac), I like to tie the filly in the arena so that she learns patience and can deal with having horses work while she stands. The first day I used the Pivo, I went from filming the groundwork with my filly to filming riding with my mare. Since I did not reset the red square to have it focus on my mare, Pivo was confused as to which horse it should be focused on. In this video you can see that it zooms in on Jo as I ride Mac out of frame (you even can see Jo start to get impatient, hence the reason for time on the wall):

I’m sure that as I continue using my Pivo, I’ll be making pro videos and riding like this in no time at all:

Just kidding. I’m a total wimp and definitely will not be riding like that. But, in what little time I have had it, I already am examining my riding at a different level. Sure, this was possible before with more traditional filming methods, but the ease and convenience of using the Pivo makes me much more likely to film on a regular basis.

Plus, you get to catch stellar moments like these:

Despite my own stumbles as I got used to filming using Pivo, this is an amazing product. In addition to the product itself being genius and convenient for equestrians, the company works hard to make sure that users can navigate the software and, that if they do have trouble, there is plenty of support. I rarely see a company engage so thoroughly with its users in order to ensure satisfaction. In addition to the standard support hub that many companies have on their websites, the admin on the Pivo Horse Riding Community Facebook page goes above and beyond to respond to users IN THE COMMENTS. How many companies take the time to do that? This clearly is a company that is committed to standing by its products and customers. (Godspeed Pivo Facebook admin, godspeed.)

The Pivo also comes in at an affordable price point. Given the usability and the options available to users, the fact that the higher end version of the product is under $200 (and often much lower due to the numerous discounts and sales that are offered) is mind-blowing.

Bottom line, folks: If you have the chance, get a Pivo. They’re dead useful. Especially if, like me, you spend a lot of time riding solo but still want to capture your riding on film. Having the ability to turn your phone into a cameraperson means you, too, can engage in quality video movement analysis of your riding (and spend inordinate amounts of time being amazed and horror-struck at the weird faces you make, the random tack and clothing adjustments you make throughout your ride and wondering what in the world you’re doing with your hands).

Stay tuned for Pivo updates as I take it to obstacle events and mounted shooting competitions in the coming weeks.