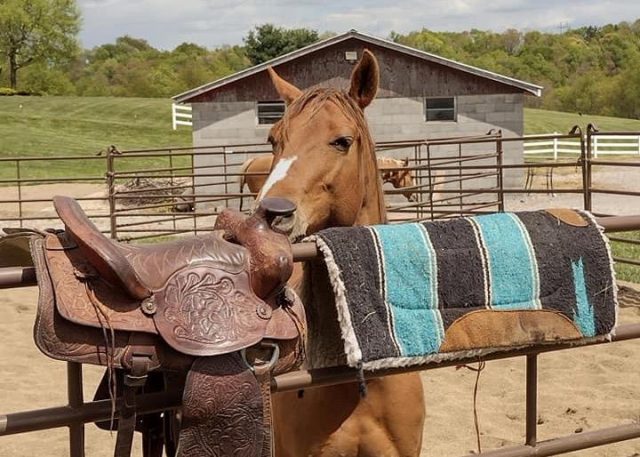 In this week’s article, Brianna and Delaware get to work under saddle. Delaware handled it all like the steady mount she is sure to become.

Earlier this spring, we introduced Horse Nation readers to the Appalachian Trainer Face Off (ATFO), a training competition “that leads to a better view of what horse rescue means, what adoption should look like and how the horse industry can … help horses in a meaningful way.” The training period takes place over the course of 100 days and culminates in a competition from Thursday, August 19 through Saturday, August 21, 2021 in Winfield, West Virginia. Throughout the course of the retraining period and competition, we will be following the journey of amateur trainer Brianna Ivory and her ATFO horse Delaware. You can catch up on the previous pieces in this series here.

One of the main goals of the ATFO is to create adoptable horses that have a bright future in a suitable home. For the trainers in the competition, that means getting the horses used to being handled and ridden on a daily basis. And Brianna Ivory wasted no time in preparing Delaware for that part of her education. Within a few weeks of arriving at Shooting Star Ranch, it was time for Delaware to become acquainted with tack. 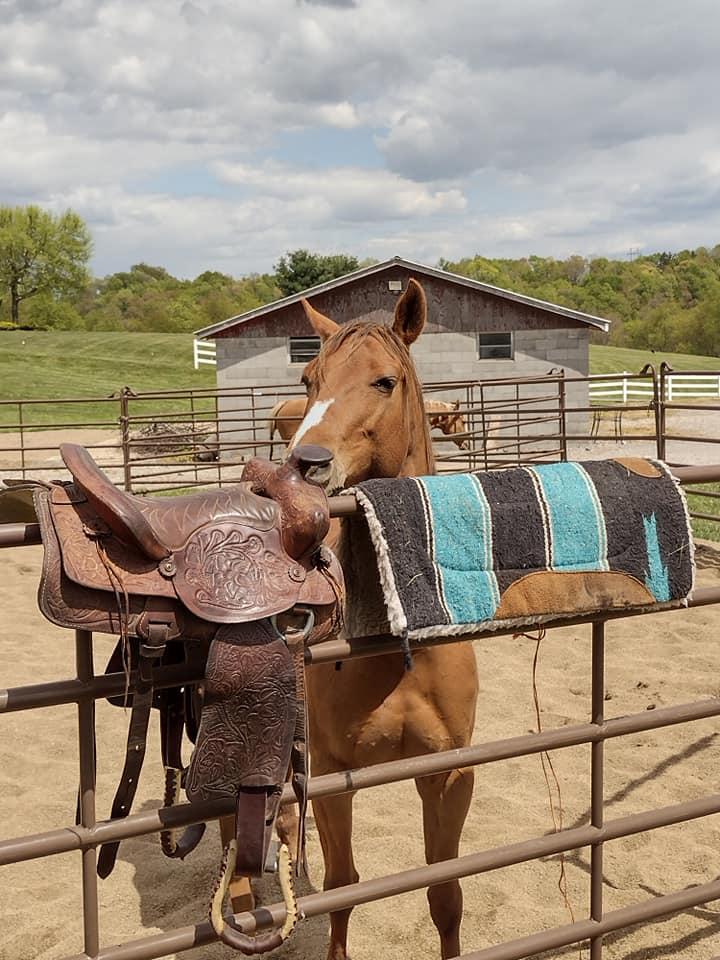 Before actually getting on Delaware, Brianna did a lot of work preparing the horse to take a rider. From respect on the ground to desensitization, Brianna made sure that Delaware was mentally prepared for the next step in her education. Brianna got Delaware used to the feeling of moving with a saddle on her back, accustomed to the feel of pressure on her sides and to having a rider above her (as opposed to on the ground in front of or next to her). All of these steps set up both Brianna and Delaware for success for the first ride.

When it came time to actually get on Delaware, the horse, of course, took it in stride. Brianna recalls, “The first time I sat on Delaware, she didn’t have any problem with it. She just stood there. Once I asked her to walk forward, she was either confused or had decided that moving forward with a rider on her back wasn’t going to happen. She just stood there. I had to have Bryan (Brianna’s fiancé) walk in front of her and she followed him around the round pen. Every time he would walk left and I would ask her to walk right she would just stand there. After a while of playing follow the leader she finally figured out it was okay to walk around without Bryan.”

As someone who has observed Brianna’s training program (even if from afar) since it began, one of my favorite things about her approach to horses is that she works to expose her horses to as much as possible as soon as they are ready for it. For Delaware, this meant going out on the trail often and early (amongst many other adventures that we’ll cover through the course of this series). Before riding her, Brianna was ponying Delaware on the trails so that once it was time to ride, the surroundings would be old news. 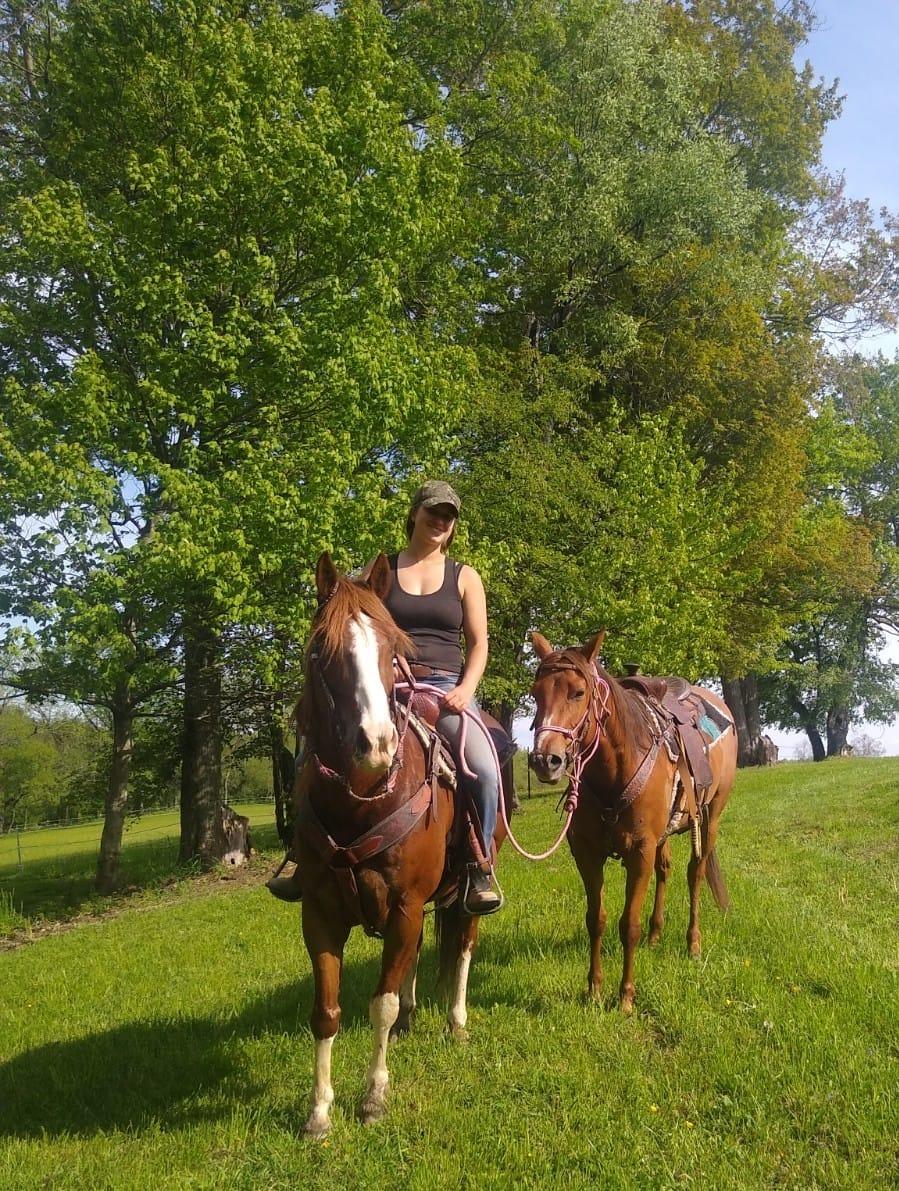 This training has paid off. The day after Delaware was first ridden, she went out on the trails again, this time saddled. Brianna remembers the trip, saying, “We usually use our gelding, Mack, to pony horses since he is such a laid back guy. Delaware followed him with no hesitation. We ended up trail riding for about 30 minutes, which included going up hills, down hills and a creek crossing. Delaware was a champ.”

The next step was to take Delaware on a trail ride with a rider. Once again, Mack was the lead horse so that Delaware would be comfortable. Brianna recalls, “The surprising part was Delaware decided it was a better idea to lead the ride instead of follow. She did the exact same 30-minute ride that we had done the day before with me on her without any troubles.”

Brianna has been incredibly pleased with Delaware’s willingness to try nearly anything that has been asked of her. Her only hesitation has been being asked to move out more. After the trail rides and getting Delaware more comfortable in tack, the next step was to trot while her in the round pen while being ridden. She finally gave her first objection. Once she began trotting, she started crow hopping until she realized she wasn’t going to win. Instead she decided it was best to just stop and not move. Brianna says, “I finally had to get a riding crop to keep her moving. She definitely prefers the trail over work in the round pen.”

Even when showing her more rebellious side, throughout the course of her training, Delaware has proven time and time again what a great brain and easy going personality she has. This held true with getting her started under saddle. From first being introduced to the saddle to carrying a rider, Delaware has taken it all in stride. This, more than anything, is demonstrative of why Heart of Phoenix does what it does and the importance of programs such as the ATFO. Based on her background, Delaware was the type of horse that, at one point, would have been considered unadoptable. However, with a little time, patience, and the skill of the right handler, she is well on her way to being a great riding horse and partner.

We will be following along on their journey up until and through the competition. You can read updates each week — we can’t wait to share Delaware’s progress.

If you would like to support Brianna and Delaware on their ATFO journey, you can do so through a variety of channels. Brianna has created an Amazon wish list for Delaware and cash donations can be made via PayPal. If you would like to make a tax deductible cash donation, you can do so through Heart of Phoenix by sending it through PayPal to [email protected] — just put in the notes that it is for Delaware and Brianna. You can also send donations directly to Brianna. For more information on how to do so, email [email protected]. Put ATFO Donation in the subject line.