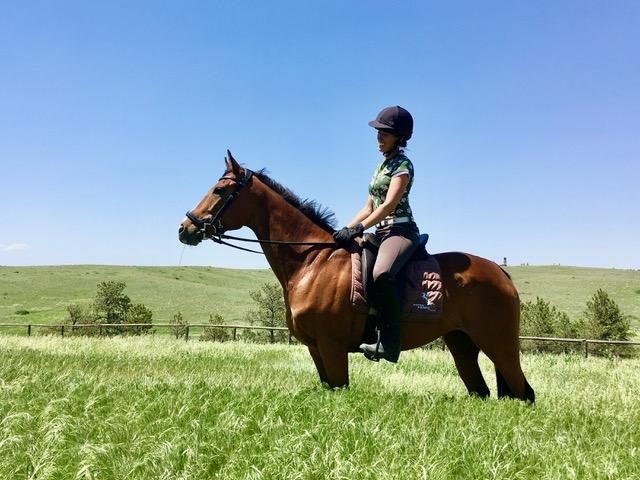 Training an OTTB is a study in literary proverbs… That sounds like a proverb in and of itself. Check out Britany Chism’s progress with her Retired Racehorse Project Thoroughbred Makeover hopeful, Itybityquikasakity.

For 480 accepted trainers, the journey to the Retired Racehorse Project‘s 2021 Thoroughbred Makeover and National Symposium, presented by Thoroughbred Charities of America, has begun! Over the next eight months, four of those trainers will blog their journeys, including their triumphs and their heartbreaks, successes and failures, for Horse Nation readers. Today, blogger Britany Chism discusses how training an OTTB is a study in proverbs.

It turns out the retraining of an OTTB is a study in literary proverbs.

Here are my favorites:

Let’s start with the best laid plans. When I purchased Kittie (JC Itybityquikasakity) last October, I had grand visions of going to schooling shows by April. After multiple setbacks, which I’m certain you can all relate to — including gashes in legs that required stall rest, and the inability to find a good truck in this market to pull the unicorn trailer I found last month (seriously, if you’ve tried looking for a used truck, you know what I mean) — we finally made it to our first major off-property adventure the first weekend in June. So that’s two months off of our original plan, and right on time for Kittie. It also wasn’t a schooling show, but it WAS a sleep-away camp, and exactly what she needed.

Two of my friends were competing at the Event at Archer (Area IX), so we tagged along for the two days as a non-compete. We went up on a Friday morning in my friend’s wonderful head-to-head trailer, and Kittie learned how to go up a ramp and back up into her stall (different than the straight load she’s used to). Three hours later we arrived in a place she didn’t know and, while she was a little anxious, we got her into her stall with no drama, and she instantly befriended the geldings around her.

After settling in for a few hours, I took her for a walk and, like most OTTBs, Kittie would spool up when she neared the arenas and relax when near the stabling — to her, the arenas meant it was time to race. We barely made it halfway.

Twenty-four hours later, however, Kittie was a different horse entirely. She had relaxed so much that we decided to try for a ride in the big arena and, to make sure it stayed as positive as possible, we phoned a friend and got some coaching from Ashley Horowitz. The ride began with some anxiety, but with Ashley’s reminders to smile and breathe, Kittie listened to my seat and finally settled enough to explore the arena. After 20 minutes, we ended on a positive note and called it a day.

The next morning was the most surprising transformation of all. The arenas that had previously triggered so much anxiety, were now fair game. Kittie marched (in hand) up to that area of the grounds, right past the grandstands, not even giving them a second glance, and confidently started munching grass on the other side. I couldn’t believe the progress she had made in 2.5 days.

She’s my first mare since I was a kid, and I’ve had countless friends remind me in the last several months, that you TELL a gelding, but you ASK a mare. It’s all about negotiation, and I’m beginning to understand… persuasion is better than force. 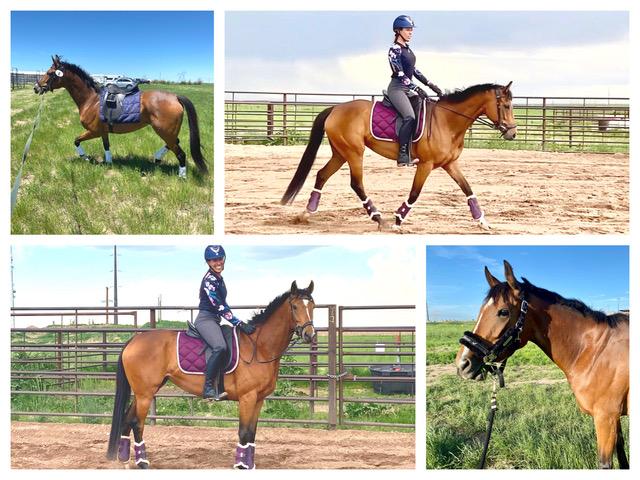 An allegory of Kittie’s anxiety at Archer, from the top left: lots of nerves and tension upon arrival; the next day as she settled into our ride; and cool as a cucumber by the arenas the morning of our departure. Photos by Britany Chism and Ashley Horowitz.

Kittie is likely the only horse I’ll have for the foreseeable future, as such, I’ve very intentionally tried to remain unattached to a schedule and what other Thoroughbred Makeover hopefuls are doing, and instead try do my best to listen to her and what she needs from moment to moment. At times this has been total guess work, but recently, what started as small flickers of success, have morphed into undeniable training wins. 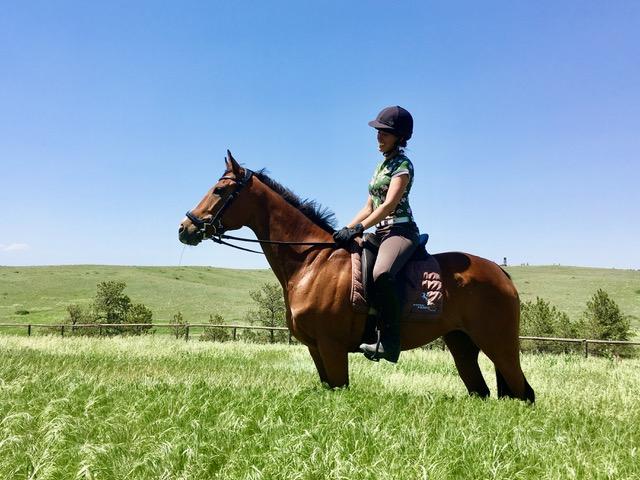 On a brave walk back to the barn by herself after our lesson at Ashley Horowitz’s place, where she conquered the indoor arena. Photo by Ashley Horowitz.

We’ve now been to four places in as many weeks, and the transformation she’s made has been astonishing. With each adventure she gained confidence and the nerves settled, allowing for outrageous success on our most recent outing — a birthday trail ride for my friend, Jennifer.

Our party was comprised of three OTTBs, and the two mature (we’ll use this word loosely) fellows in the group were both recovering — one from an injury and the other a mysterious lameness in his pasterns. Neither had been away from home in almost a year — and these were supposed to be Kittie’s mentors for her first trail ride…

Naturally, all three of their riders were questioning their judgment in going, but like all good eventers, we did it anyways and called it a good time!

So off we went, and they all handled themselves spectacularly well — Kittie was an absolute rock star from start to finish. She learned about mountain bikes, weird looking rocks, the sound of snapped twigs and how to trot over logs. She even tackled a bank and stepped off nicely. Her level of bravery increased with each passing minute and by the time we returned to the trailer, she was like an old hand. 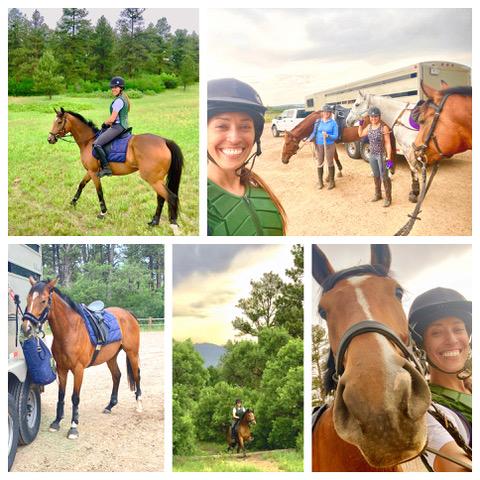 On that note, I’ll leave you with one of my favorite proverbs: Better late than never…

We have been fully embracing the mantra of ‘“stay in your lane” — a favorite amongst Thoroughbred Makeover trainers. If you’ve been following along, you know that we’ve been slow to canter and, when we have, it’s often resulted in exuberance and the occasional buck. I should also mention that Kittie had a very “floaty” rear end the first time I tried her at Royal Fox Stables, and since then, any time she’d lose her balance, her backend would become even more gravity defying — so this is not a new phenomena, just our special brand of “opinion” (see note above about ASKING a mare). Instead of continuing to push her imbalance, I paid forward, put in the work and hoped it would work. After checking for lameness, I then spent hours and hours double lunging, developing Kittie’s topline and improving her balance, and got her some much-needed bodywork.

Now it was her turn. It had been months since I’d asked for the canter, but I finally did two weeks ago, and after a few snarky steps (by a few, I mean several, and lots of opinions about it — see blooper below, which is representative of the extra fun parts at the beginning), she settled in and not just cantered but willingly went into the contact without me even having to ask. We can finally canter, y’all!

About those best laid plans… 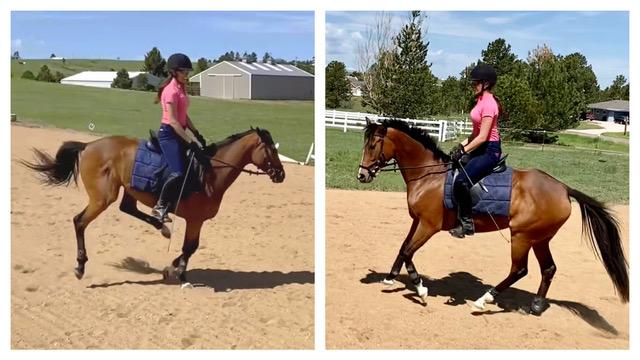 From bloopers and bucks to a real canter — Kittie sorts out her body. Photos by Krissy Singleton.