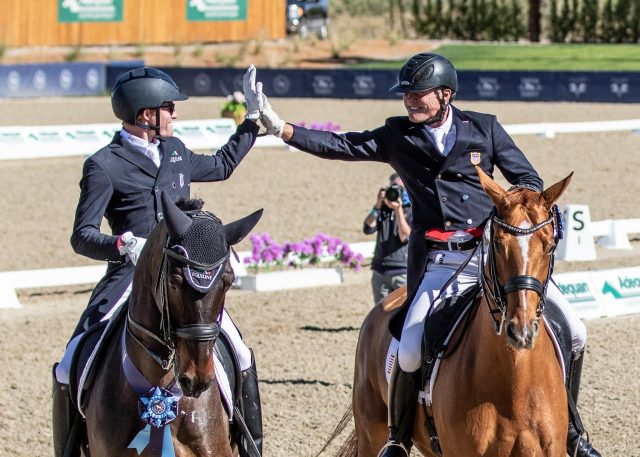 Father’s Day is Sunday, but for the Ebelings, sharing a passion for dressage and working toward excellence creates Father’s Day feelings every day for this father and son. 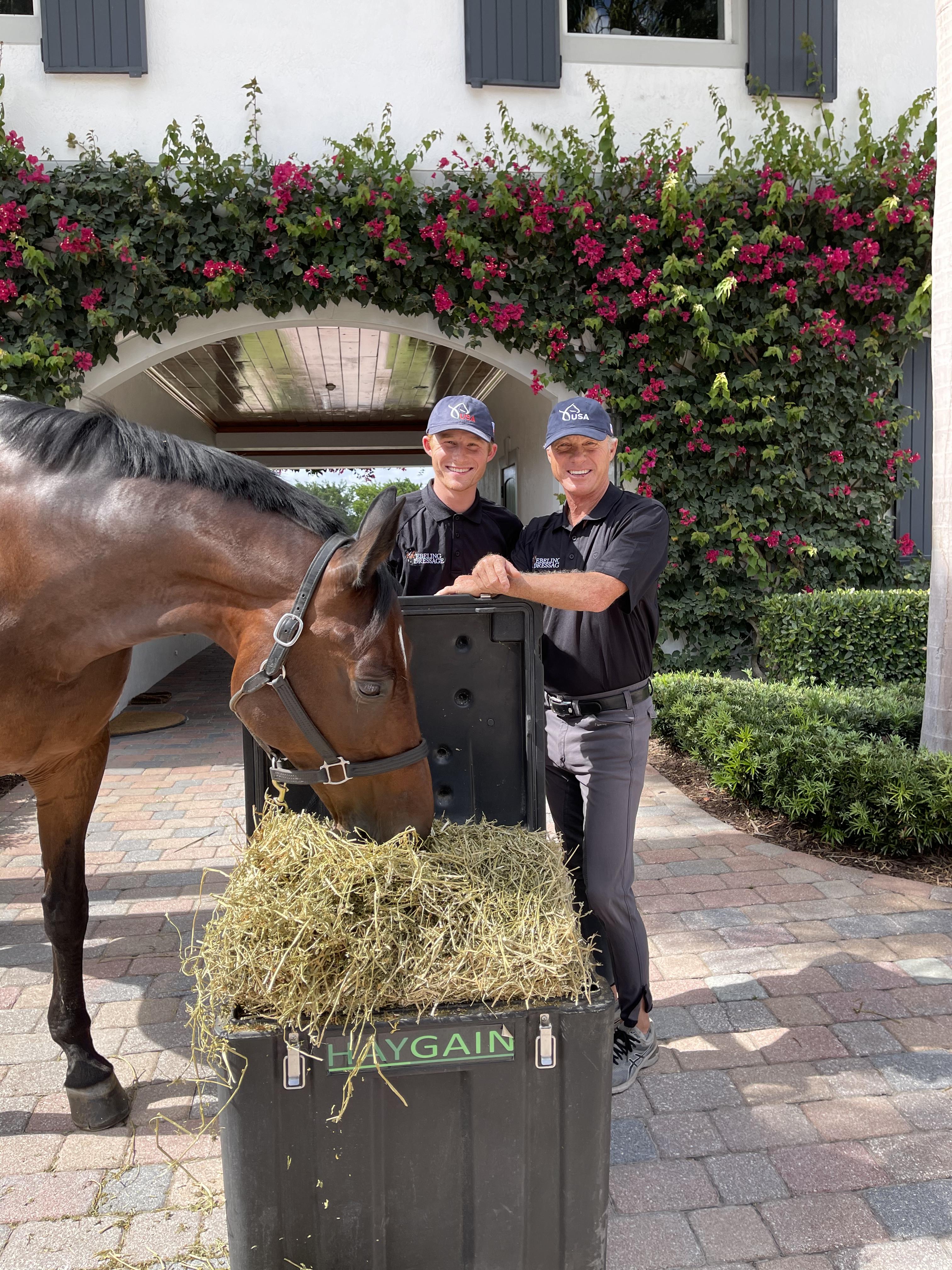 Twenty-one-year-old Ben Ebeling has his Father’s Day gifts taken care of for a long time. The son of 2012 U.S. dressage Olympian Jan Ebeling has been making his dad proud, in and out of the equestrian arena, for several years.

“As a dad, to see your child step into your footsteps, enjoy it and do so well,” Jan reflects, “how much better can it get?”

Jan said that a few years ago, when the idea of Ben being seriously considered for the U.S. Olympic team was not on any near horizon. Last week in Florida, Ben defined “how much better it can it get” while excelling amid the country’s best in the US Dressage Observation Event in Florida. He was, by far, the youngest of 15 pairs shortlisted for Tokyo. He and Illuster van de Kampert continued a remarkable ascent with their mid-70s scores during the high-stakes event.

Jan and Amy Ebeling’s gift to their son was not handing him a ready-made superstar. A half-brother to Steffen Peters’ Suppenkasper, by Spielberg, Illuster– aka “Big Dog” — has outsize talent, for sure, along with outsize energy and sensitivity. These are great traits in an international dressage horse if they can be channeled in the right direction.

That hasn’t always been the case.

During a Young Riders Grand Prix outing in Europe in 2019, Illuster’s energy was so excessive that Ben chose to retire from the test. Crossing the 60s score threshold early in 2020 marked a turn in the right direction. “I was like, Yeah!” Ben shares. By Week 8 of the Adequan Global Dressage Festival that year, Illluster was settling into the new groove of being both “calm and on,” resulting in Grand Prix and Grand Prix Freestyle victories, and earning scores in the 70s. “I was beside myself!”

Although the Festival ended two weeks early, Ben was thrilled to close it on their Week 10 victory in the CDIO U25 Nations Cup win in March with the U.S.’ Stars and Stripes squad.

The Tokyo Olympic idea took real root during Desert Dressage CDI 3* in California last fall. Amy Ebeling helped launch the addition to the California international dressage calendar, and Ben and Jan were among its big winners.

“We ended at the Desert International Horse Park on a really good note,” Ben recalls. He sensed it was time to move up Illuster. “He is the type of horse who gets better the more difficult something becomes. The Grand Prix and the Special were really good tests for him.”

“That’s when we starting talking,” Jan chimes in. “If the horse looks really secure in the U25 Grand Prix, we are going to maybe try a national Grand Prix. We’ll try it out. We didn’t want to go out and have people say, ‘Now, they are crazy. They are going for the team.’ But every time the horse went out, he got more and more secure. The horse got more comfortable and Ben got more comfortable with the horse.” 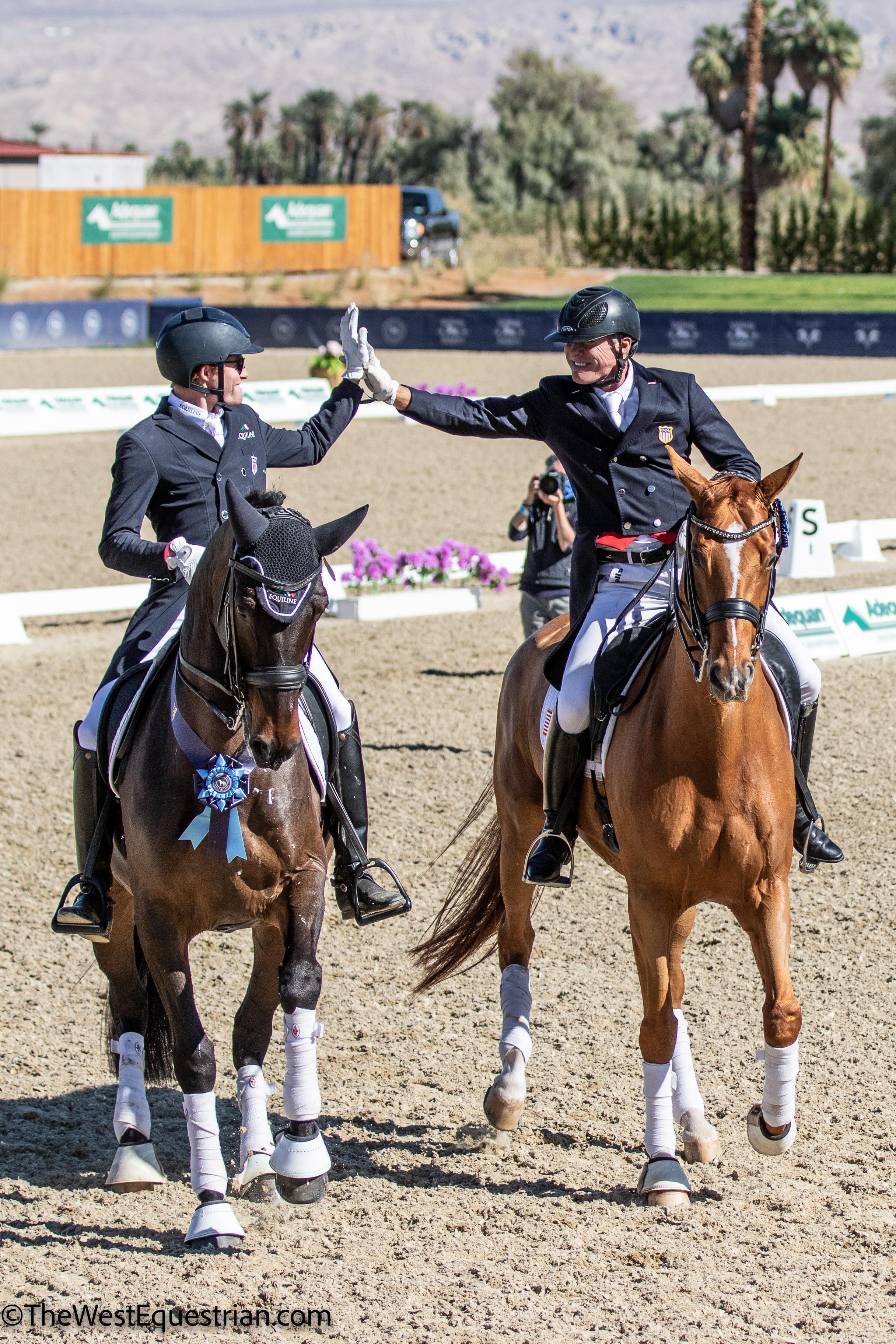 Photo by The West Equestrian and provided by Haygain

A Bit Of A Shot

Early in the Wellington, Florida circuit this year, Ben declared for Olympic consideration. “It’s just one of those things that, if you are at the level, you feel like you better do it just in case,” Jan recalls. “As the season wore on, we started to realize we’ve got a bit of a shot.”

Back-to-back wins in Wellington’s Global Dressage Festival 3* preceded the debut of their Grand Prix Freestyle, fittingly on the U.S.’s biggest, boldest stage: the Palm Beach International Equestrian Center’s International Arena. Along with riding through the entire test for the first time, it was the first time riding at night and under the lights for horse and rider. Their 77.555% was second to Olympian Adrienne Lyle and Harmony’s Duval.

Ben had dreamed of following closely in his dad’s Olympic path. While he’s always “gone big” in his ambitions, there was no rush, at 21, to earn an Olympic opportunity. Yet, on April 28, there he and Illuster were on the U.S. Dressage Short List of Tokyo contenders.

Olympics or no this summer, this chapter of the Ebelings’ odyssey is written in memory’s indelible ink. Much like the first time Jan had the pleasant surprise of Ben expressing serious interest in dressage several years ago. “He got very inquisitive, asking me ‘How do you do those pirouettes?’”

“Why do you ask?” Jan responded.

“Ben said he thought if he could get his jumper to do something like that, they could go so much faster through the turns. I thought, hmmm, this kid knows what he’s doing.”

The family’s passion for dressage is rooted in their passion for horses. Giving them the best care is another shared priority. That’s why the Ebelings added Haygain Steamed Hay to their horses’ routine in the fall of 2020. At the time, terrible wildfires were ravaging Southern California. The Ebelings’ California stable, the Acres, was not threatened by the fires directly, but smoke particulates throughout the region made it challenging for all to maintain training routines at times. Steaming helped reduce overall particulate intake so the horses could stay in work when the air quality permitted.

The Ebelings took their steamer across the country for the winter and feel steamed hay’s benefits are equally important in Wellington. Changes in climate and hay sources can trigger allergies and breathing issues. By reducing up to 99% of the breathable irritants found even in top quality hay, Haygain Hay Steaming minimized those risks. It nearly triples the water content compared to dry hay, while retaining nutrients and upping appeal through its taste and scent.

Early in the Florida stay, Jan’s top Grand Prix horse, Indeed, passed a vet check with flying colors. “Our vet could not have been happier with her muscle development, her coat and her overall health,” Amy Ebeling reports. “I think steamed hay has made a huge difference.” The horses love it, Ben and Jan add.

Plus, it delivers another everyday gift for the German-born American dad. “The aroma reminds me of freshly baked bread from the bakeries back home in Germany.”