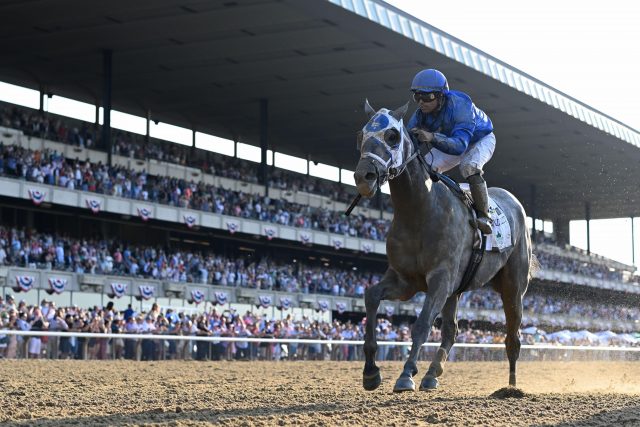 Essential Quality took the win at the Belmont Stakes on Saturday. ‘Talking Horses’® by Dr. Gregory Beroza, aka HorseDoc®, has the scoop. 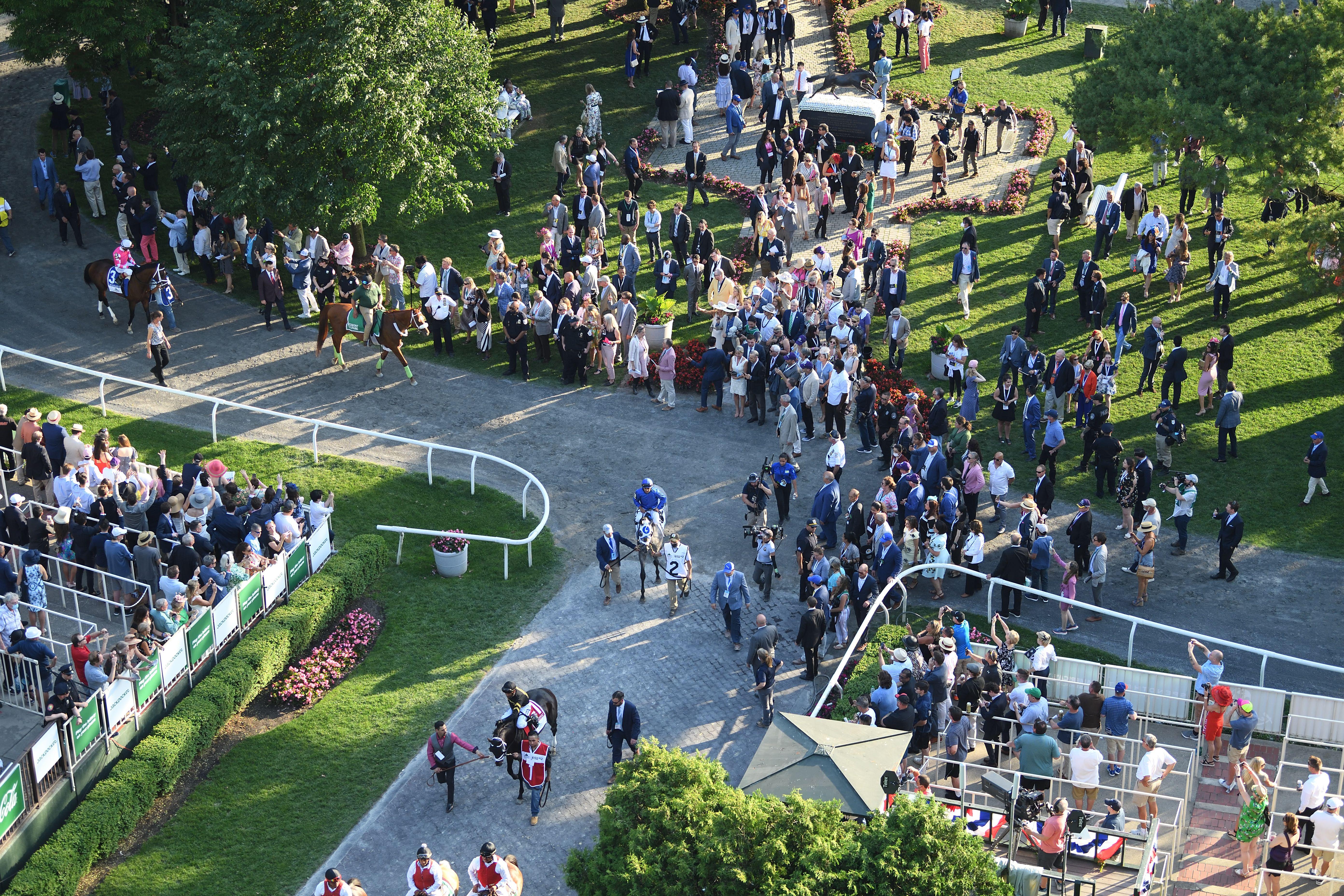 The pre-race betting favorite usually does not win the Belmont Stakes. However, in recent years, many horses that do not win the Kentucky Derby and don’t race in the Preakness Stakes two weeks later, like Essential Quality, achieve a higher winning performance in the Belmont Stakes. This year produced similar results as the final two finishers both followed that pre-Belmont racing agenda, including Hot Rod Charlie.

Hot Rod Charlie became the 9:2 second favorite just prior to the Belmont Stakes. He was the third [or second place with disqualification] Kentucky Derby finisher and placed second in this year’s Belmont Stakes. Like Essential Quality, Hot Rod Charlie passed on racing in the Preakness Stakes to concentrate on winning the Belmont Stakes. He aggressively took the lead shortly out of the starting gate, maintaining the fastest fractions in the first quarter mile of any former Belmont Stakes entrant, and he maintained this speedy pace until being challenged at the final turn and then being passed by Essential Quality in the last 1/16 mile of the race. 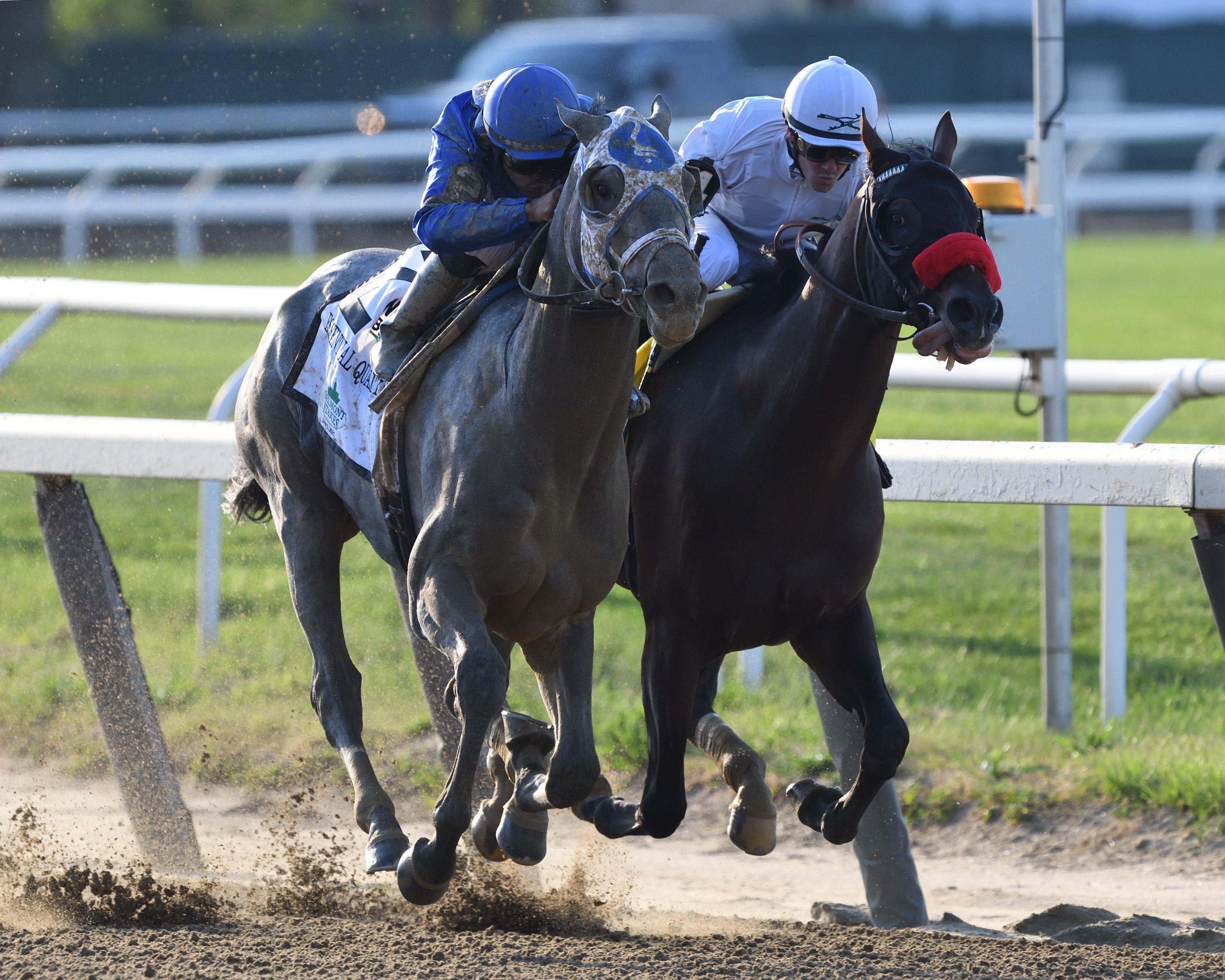 Essential Quality and Hot Rod Charlie battling to the finish in final stretch. Photo courtesy of NYRA and by Dom Napolitano.

Rombauer was the third pre-race betting favorite at 5:1 odds. Generally, the Preakness Stakes winner does not win or have as good a performance in the Belmont Stakes. That was the case this year for Rombauer. The Preakness is the shortest Triple Crown race (1-3/16 miles) and the Belmont Stakes following three weeks later is the longest race (1.5 miles). It takes a special horse to give his best performance in two or, more impressively, three of these closely timed races within the series. That is why winning all three of the Triple Crown races at different distances in five weeks is such an amazing and elusive feat. There are only 13 Triple Crown winners since Sir Barton in 1919. 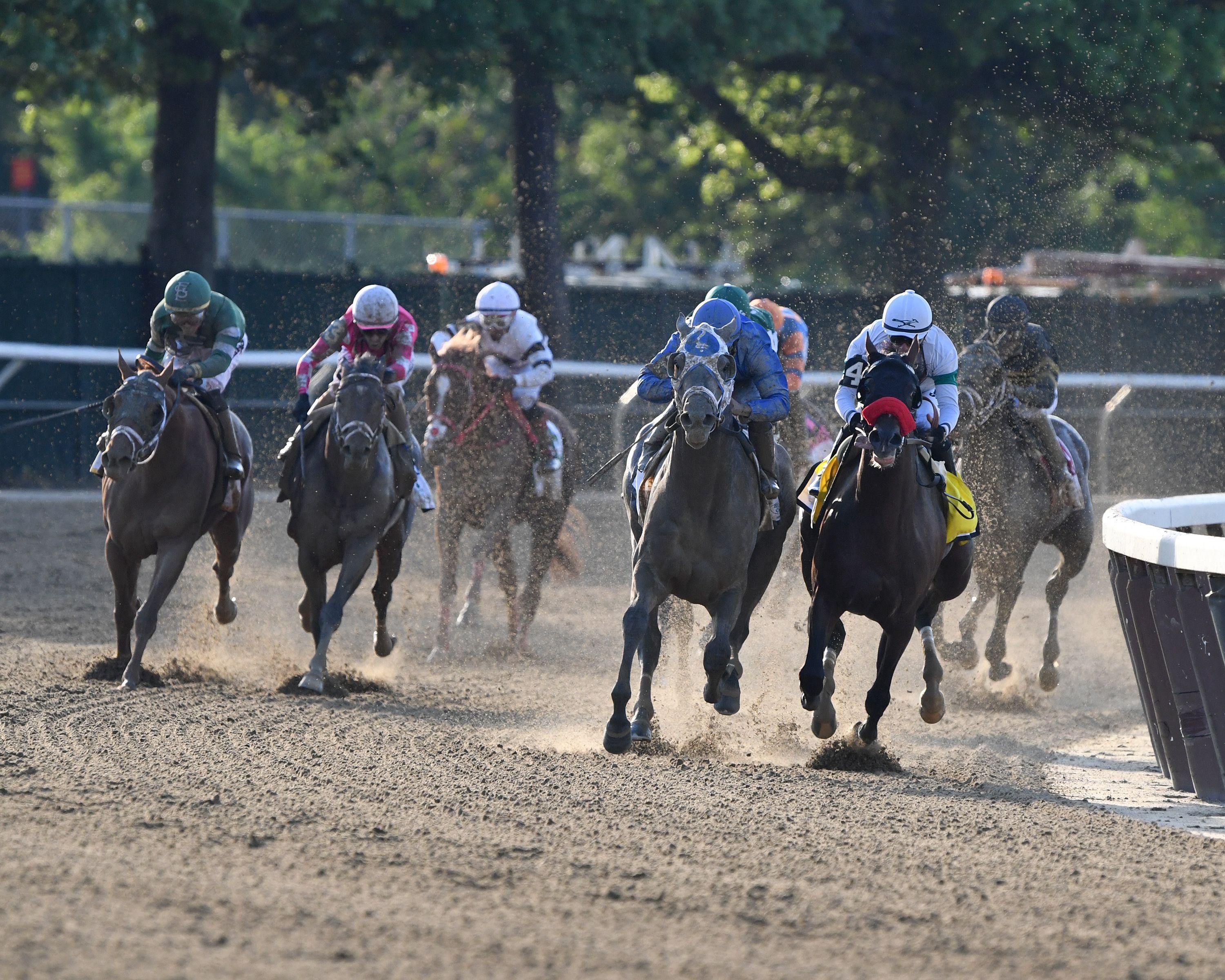 All horses tightly bunched as they enter final turn of 1.5 mile race.Photo courtesy of NYRA and by Dom Napolitano.

The 2021 Belmont Stakes was one of the most evenly matched and highly contested races in Triple Crown history.  All of the eight horses in the race were bunched fairly closely until the final ¼ mile. This is Louisville native Brad Cox’s first Triple Crown Classic race win. Another of his horses, Mandaloun, came in second in the Kentucky Derby and potentially could be awarded first place finish if the suspension for Baffert and his horse Medina Spirit holds up. Cox would then join two other trainers in having won two legs of the Triple Crown series with two different horses in the same year (the other trainers were Mark Casse in 2019 and D. Wayne Lukas in 1995). 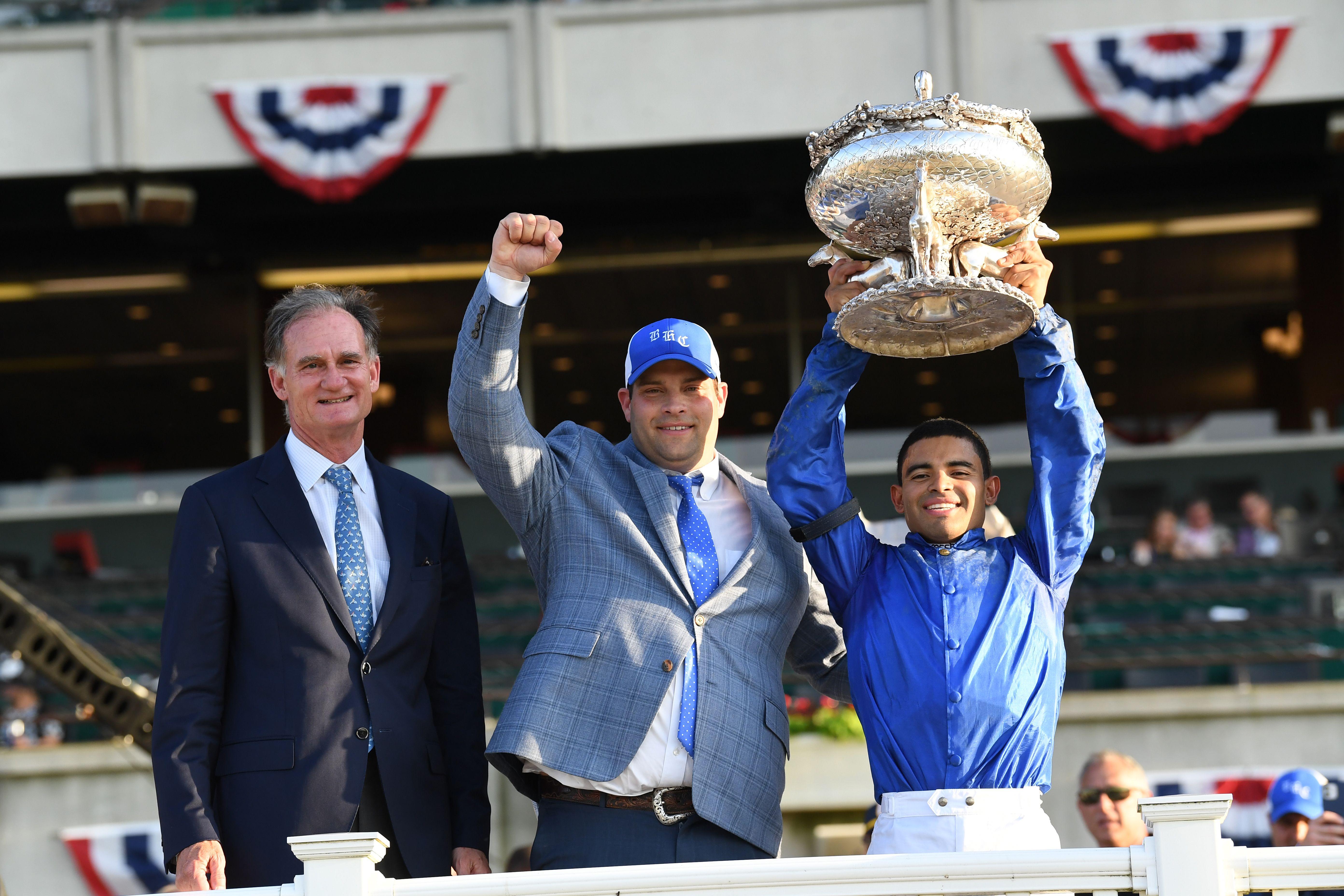 This is Panamanian jockey Luis Saez’s first official Triple Crown Classic race win. He finished his winning ride by giving a solemn look to the heavens and dedicated this win to his brother Juan Saez, who died at 17 years of age in 2014 from a head injury suffered during a riding accident at Indiana Grand Racing & Casino. Two years ago, Saez guided Maximum Security to victory in the Kentucky Derby only to later be set back to 17th for interference against War of Will. 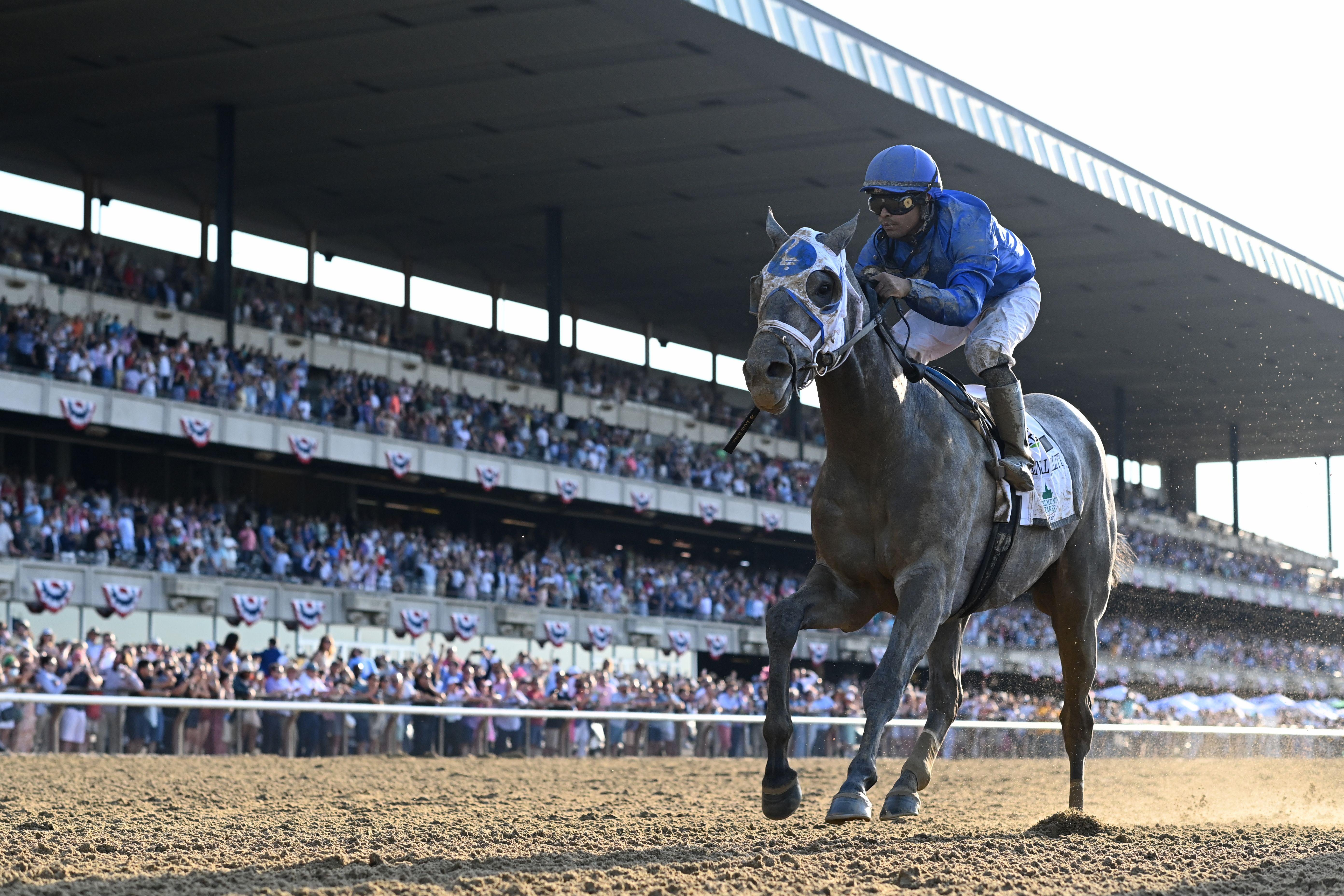 Essential Quality winning at the wire. Photo courtesy of NYRA and by Adam Coglianese.

Essential Quality covered the 1.5 mile race in 2:27.11 minutes to win the sixth time in the horse’s seven career starts. He is a son of Tapit, which appears to be the most successful sire for current Belmont Stakes winners: Essential Quality (2021); Tapwrit (2017); Creator (2016); Tonalist (2014). Tapit was the grandsire of 2020 Belmont Stakes winner Tiz the Law via his son Constitution.

United Arab Emirates ruler Sheikh Mohammed bin Rashid Al Maktoum was congratulated as the owner of Essential Quality. The connections would like to aim Essential Quality toward competing this summer at Saratoga in the 1-1/4 mile Grade 1 Travers Stakes. That race potentially uniting today’s best current racing Thoroughbreds for a super mid-summer extravaganza of a race. 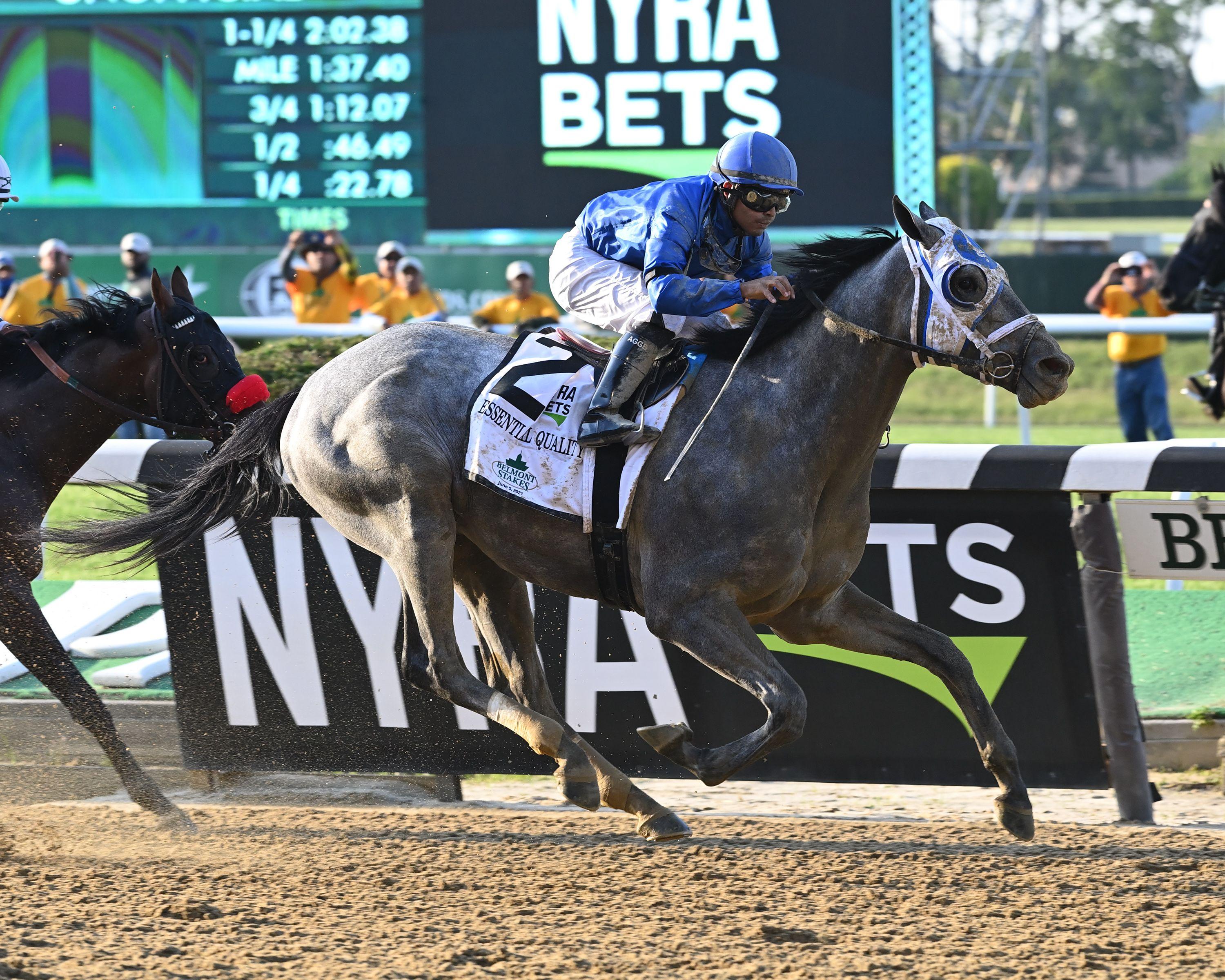 Essential Quality beating Hot Rod Charlie by one length.Photo courtesy of NYRA and by Chelsea Durand.