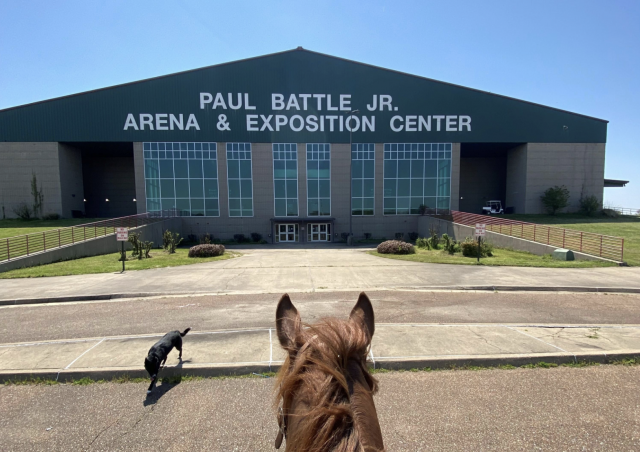 Buns raced around the warm up pen bouncing me all over the place like that scene in Yellowstone where Jimmy is taped to the horse.

On April 9, 2021, Buns and I started out on our long journey to Tunica, Mississippi for the CMSA Tennessee Prelude to Nationals Shoot on April 11 – 12, 2021 and the CMSA Jeffers National Championship on April 14 – 17, 2021. It was a long drive but we both made it safely without issues.

Prior to our travels Buns was in training with Penley Horsemanship to become softer in the bit and to utilize his body better, resulting in us being more successful at faster speeds. Each time I rode him while he was in training he felt better and better. I couldn’t wait to unleash him in the big pens at Nationals! The problem with that was Buns couldn’t wait to be unleashed in the big pens at Nationals either. This made our first day of shooting… frustrating.

Our first day was BAD. Probably the worst shooting day we’ve had since we started shooting. On stage one Buns was dragging me through the arena, completely blowing off seat and leg cues to slow down. We missed a gate, which he decided to dodge at the last second, and had to circle back to finish our run. It was a let down but I thought it was me not cueing him correctly or possibly cueing him at the wrong time.

I brushed it off and thought about what I could do better. How could I cue Buns more effectively by lightening my seat while riding? After some long, hard thinking I went into stage two and thought, “Lets do this!” The first stage jitters were out of the way and I was thinking more clearly.

Nope. Buns ran off with me, wouldn’t turn and we ended up at the top of the area and again, had to circle back to a gate we missed. I felt really let down at this point, but I didn’t say anything. I came out of the ring and Jared Penley said, “Maybe we should change you guys back to the bit you were riding in. Maybe this bit isn’t working for you and him.” I agreed to put him back in our old bit for my first run of shotgun.

Shortly after that I had a mental breakdown in the tack stall. Yep. I cried about how I was a crappy rider and how nothing was going right in my life. It all came crashing down on me at that very moment and I threw myself a pity party of one in the tack stall right before my first run of shotgun. Then I cowgirled up, got on my horse and went on my way to warm up and run my first run of shotgun.

“This is going to be the start of good runs for the rest of the week!”

Cue Morgan Freeman’s narrator voice: “This indeed was NOT going to be the start of good runs for the rest of the week.”

I had ZERO control of Buns. He dragged me so far up the arena I couldn’t even hit my fifth balloon, no matter how hard I tried. 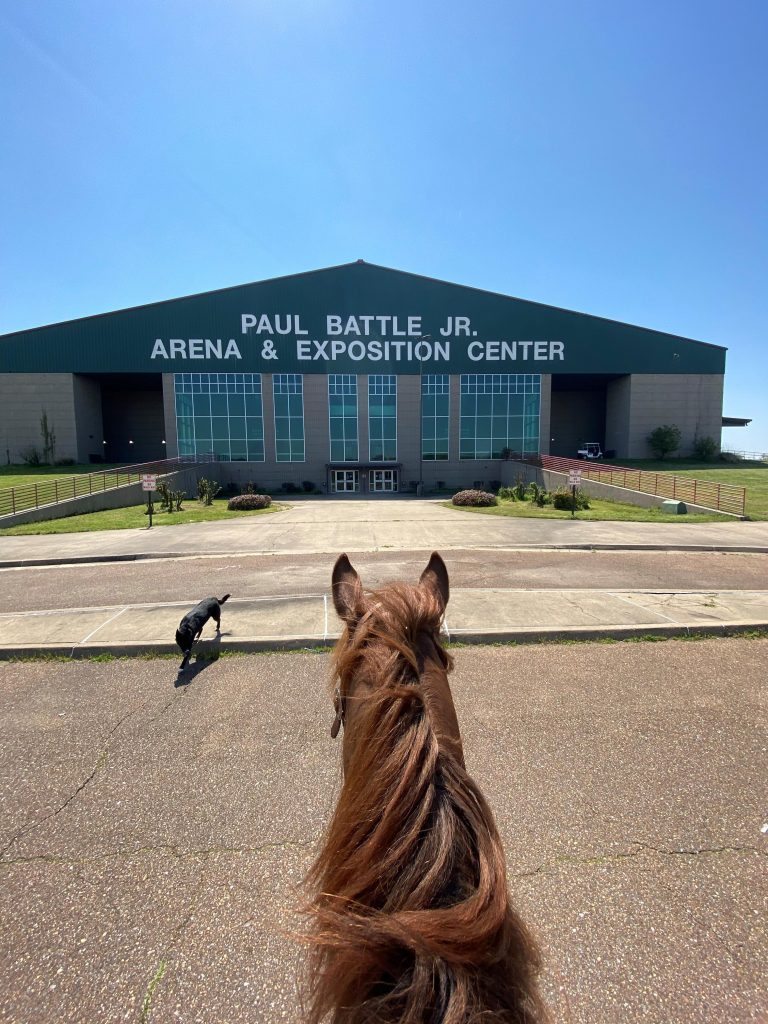 It was apparent that I was upset as I walked out of the ring. Enough was enough. Jared rode Buns before my last shotgun run and Buns was a VERY bad boy. He took off with, bucked and reared Jared. Buns just raced around the arena like a total tool. I feared that Buns was getting very close to his, “come to Jesus moment” with the way he was acting.

To be clear: This is not an undertrained or green horse. Buns has been shooting with me for years and has been in training with Jared on and off over the past couple of years. Buns also receives regular farrier and veterinary care and receives body work. Buns was having a teenage moment.

Buns, remember that time you didn’t want to be a racehorse and they retired you before you even went out for your first race? Your racehorse days are over, Buns. The mounted shooting pen has become your fate. Let’s just remember that — sooner rather than later, please.

At one point Jared said, “I don’t know what bit he needs, but it isn’t this one.” Buns was running right through the bit, acting as if taking off was the only thing he knew. He was being a total pig. And bear in mind, this is NOT a horse who misbehaves very often. After quite a bit of time, a few bit changes and a sweaty horse, it was time for my final run of the day.

Voila! The attitude adjustment from the trainer served its purpose and Buns was back to being compliant and doing his job. Buns was responsive and our lines were spot on! My shooting, however, was not, but I was so excited my horse was listening I forgot to look at my balloons.

The following day I was ready to go — and so was Buns. UGH. To the warm up pen we went, with Jared watching to make sure we were ready for our run. Jared said, “Lope him around for a while. Utilize the entire warm up ring.”

Buns raced around the warm up pen bouncing me all over the place like that scene in Yellowstone where Jimmy is taped to the horse. At this point I was like, “Well this isn’t fun.” After what I thought was an appropriate amount of time, I stopped, but Jared told me to keep cantering. Around we went … and around… and around! Buns finally reached his threshold and turned back into a compliant working horse!

Early on, I thought, “Well this isn’t fun.” That thought went to, “F*^kkkk.” I was thinking, “Buns, you couldn’t just behave yourself? Now we’re both being punished.” Although, whatever happened to lunging your horse when he’s bad? Is that not an option anymore? The worst part about Buns’s poor behavior is we both had to suffer until he was well behaved again. Buns, what did I ever do to you?

Worth a mention is the circumstances of that day. On this particular day it was 81 degrees. By the end of our intensive warm up I was dripping sweat and I couldn’t feel my body. The worst part — we had four more days with this warm up and I’ll have you know, we did it every one of those four remaining days. If you didn’t pick up on the lack of pictures in this article, it’s because we looked as hot a mess as we were.

By the end of the week we finally had it together. Buns was so responsive and maneuvered the patterns just as I asked him to. As for me, I learned the importance of just sitting on top of a horse and letting him do all the work underneath me because I was so sore that’s about all I could do by the last day.

We had too many issues between the two of us to place anywhere near the top, but we finished strong, ready for the season ahead.