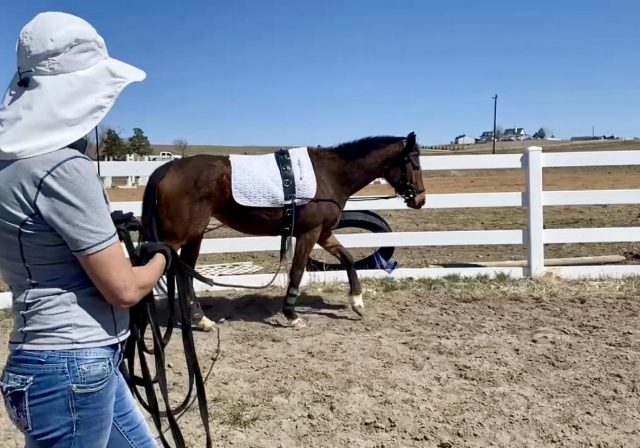 May 13, 2021DeAnn SloanContributor#RETIRED RACEHORSE PROJECTComments Off on Riding a Rollercoaster: Britany & Kittie

“The last several weeks have been a rollercoaster. One moment she’s fine and the next every little thing sets her off and she’s shuffling backwards, away from whatever it is she doesn’t like…”

For 480 accepted trainers, the journey to the Retired Racehorse Project‘s 2021 Thoroughbred Makeover and National Symposium, presented by Thoroughbred Charities of America, has begun! Over the next eight months, four of those trainers will blog their journeys, including their triumphs and their heartbreaks, successes and failures, for Horse Nation readers. Today, blogger Britany Chism discusses how training a four-year-old horse can sometimes feel like riding a rollercoaster.

As a trainer, I know I am no expert, and that’s okay. In fact, I think that it can be an advantage. Not any one thing will work for every single horse, and what works for one, will not work for another. In this, acknowledging a lack of expertise sets me up to be curious, to learn and try new things with Kittie (JC Itybityquikasakity).

But sometimes I forget that she’s four. She’s so sensible most of the time, that I’ll make the mistake of doing something new without easing into it simply because she takes most things in stride without batting an eye. But that’s not to say she doesn’t remind me!

The last several weeks have been a rollercoaster. One moment she’s fine and the next every little thing sets her off and she’s shuffling backwards, away from whatever it is she doesn’t like — that piece of hay that looked at her funny, water from the hose or the lunge whip that she’s seen daily for months. Let’s not even talk about the weather imposing on our training schedule — photos below if you need help imagining. 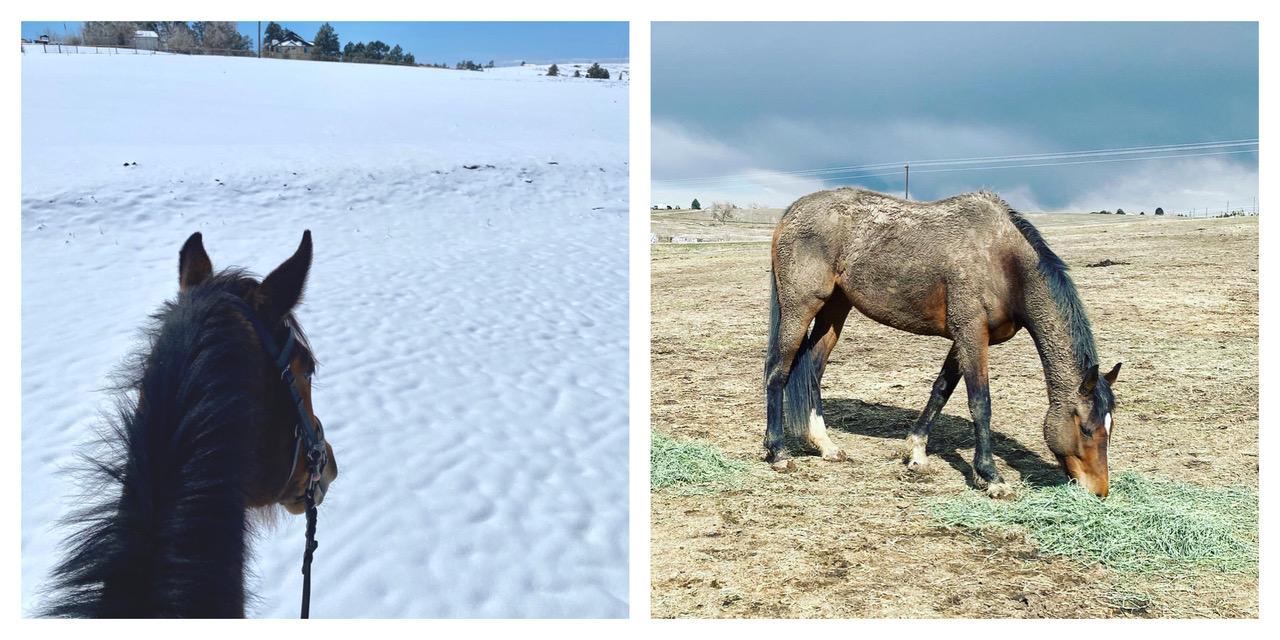 The furry beast on a snow trek, and two days later… is that an OTTB or a statue of mud? Photo by Britany Chism.

Don’t get me wrong. She’s still as sweet as ever, it’s just that her reactions are bigger and more frequent than before. Perhaps it’s spring and she is now very much in heat, but I’d hoped that all the time spent on the ground over the last several months had added up to a more solid foundation. Be it growing pains or just several holes in our training making their appearance all at once, I’ve had many a day feeling less than stellar about our accomplishments. It could also be that we’re our own worst critics. Whatever it is, now more than ever I’m grateful for the folks in our corner.

In my last post, I introduced you to Gibbs, the F450 SuperMax — working with him not only reminded me about what it took to work toward success in competition, but also WHO it took. An army of trainers, grooms, horse-holders, friends and family. I’m so grateful for the time spent last year rebuilding my backup forces.

One of those forces is Simone Windeler — she teaches dressage and is one of the most tuned in souls I’ve ever met. With her help, Gibbs and I took our dressage score from a 35 to a 23.5 (eventing) in just three months last show season. While that is no mean feat, I’ll grant that I was starting with a well-built and talented OTTB who already had four years of retraining under his belt.

Where I’m finding her help invaluable now is in her quiet reassurances that “we’ll get there.” She is unconcerned by Kittie’s antics, and by association, so am I (most days!). Now is the time to trust that she has it in her — we just need to deploy the right tool or exercise in the moment to help her find her way.

We’re still struggling with the canter (to which Simone says, “So what? You don’t need it right now, you don’t even need it for a test.”), and there is usually grumpy head tossing and the occasional buck. It’s not of the naughty variety (and she HAS been checked over by the vet), it’s like she just tries get her body and feet right, and exuberantly tries to get them underneath… not realizing that exuberance throws her off further. So Simone prescribed the double lunge.

The transformation from the beginning to the end of the first session was incredible. She started to lift more through her back, and her gait became a rhythmical, slow, powerful step. The beauty of it is that the horse is able to sort itself out without conflicting with a saddle and rider, so they’re able to develop the muscles needed to do the same movement more effectively under saddle. 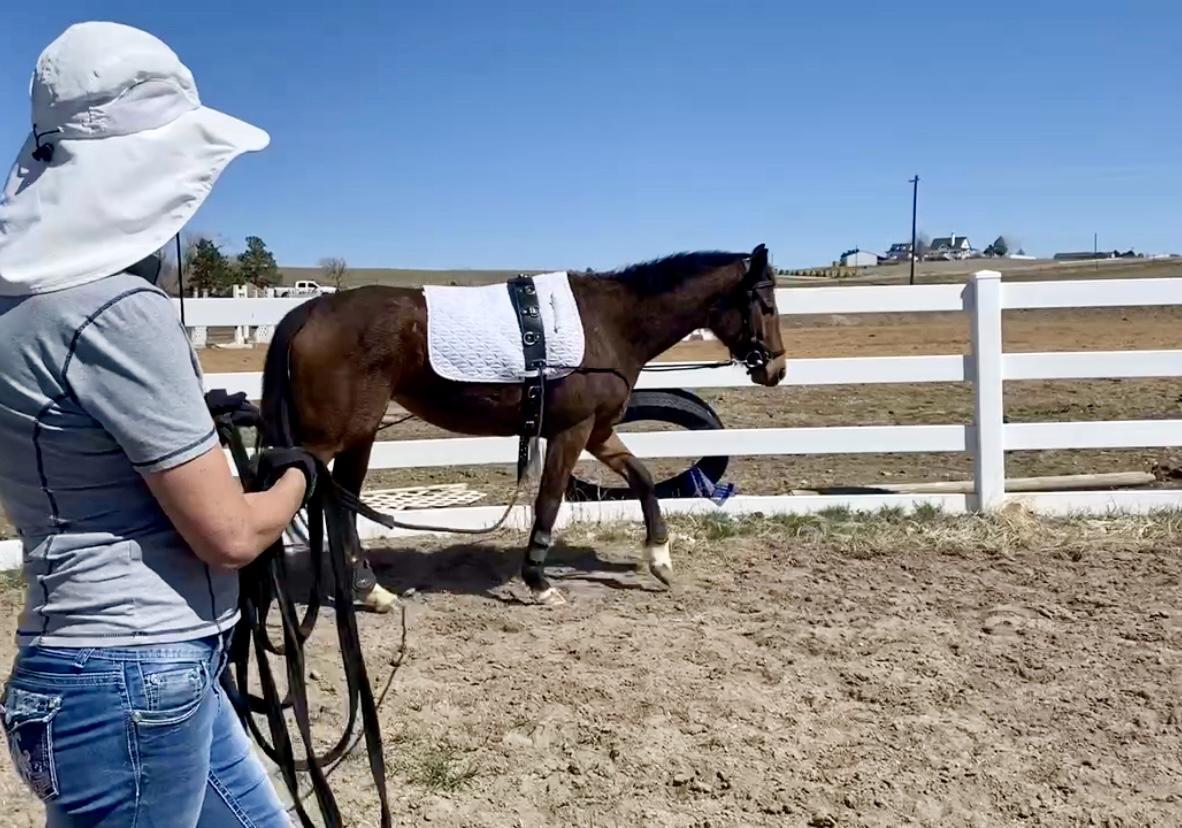 Rather than having side reins that allow a horse to lean, in this setup, you have two individual (and very long) reins that allow you to give or take more of a feel as needed, so it encourages more stretching and connection. Kittie quite agreed, and came out of the session like she’d just been meditating. Icing on the cake, by the next week she was reaching for the contact in the bridle and really started to stretch. 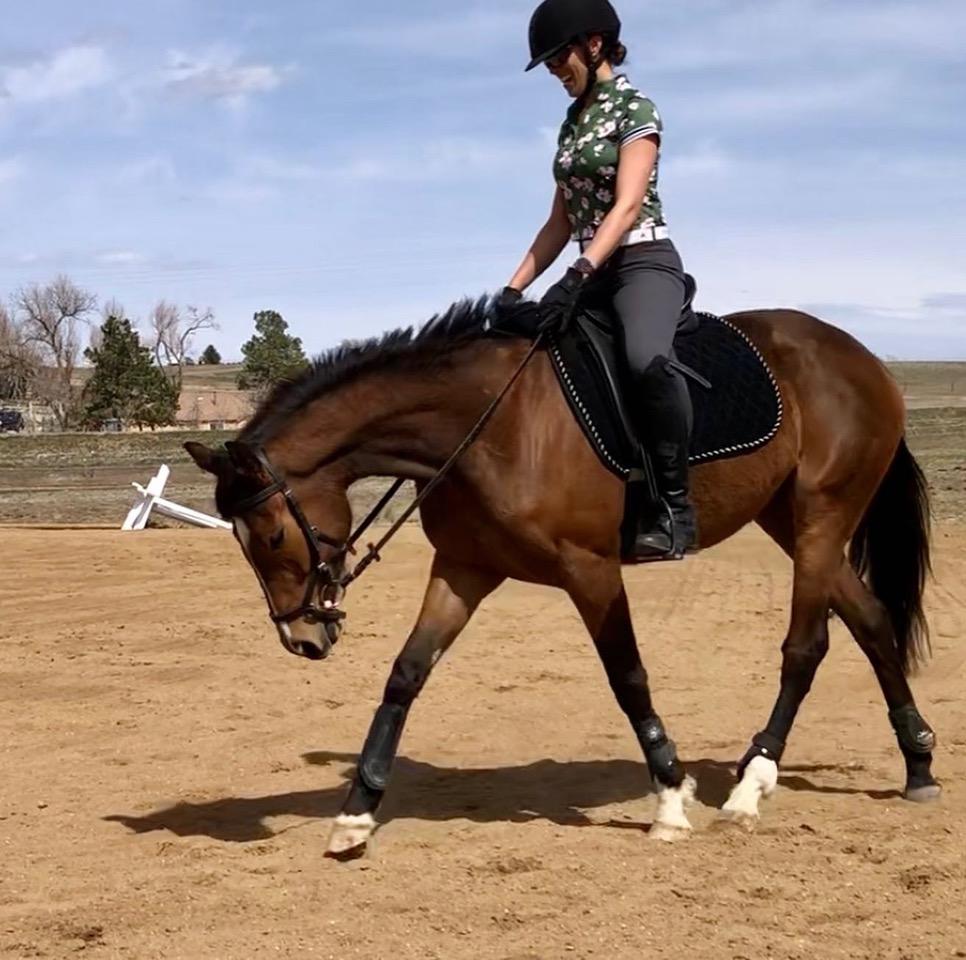 The day she realized she could stretch into the bridle under saddle — I couldn’t stop grinning. Photo by Jim Crown.

Then, there’s Ashley Horowitz (formerly Gubich), a Makeover veteran who also has superpowers with OTTBs — especially in building a relationship with liberty work. It was her influence (and the video of her super cool performance with Moo – JC Grand Moony – at the Makeover in 2017) that decided me on entering the Freestyle event and developing my own liberty routine.

First, she taught exercises that stoked Kittie’s interest in whoever happened to be working with her. Then, exercises that demanded her respect. It’s one thing to have a horse metaphorically in your pocket, and another when that horse is treading on your heels trying to be IN said pocket. Kittie is now learning the distinction. That interest and respect eventually led to her desire to “join up” or join me at will, wherever I happen to be in the ring, and is now slowly beginning to evolve into what will eventually be tricks.

During our most recent session, after I demonstrated Kittie’s current skills — which included turning on the haunch, trotting, halting, backing up and generally staying with me totally off lead — we got to work on the more fun activities. We’re teaching her to square up to the mounting block, useful AND likely a good inclusion for our routine, as well as the beginnings of her bow, namely, lifting her foot on command and holding it up with just a tap between her front legs (definitely necessary in our routine!). 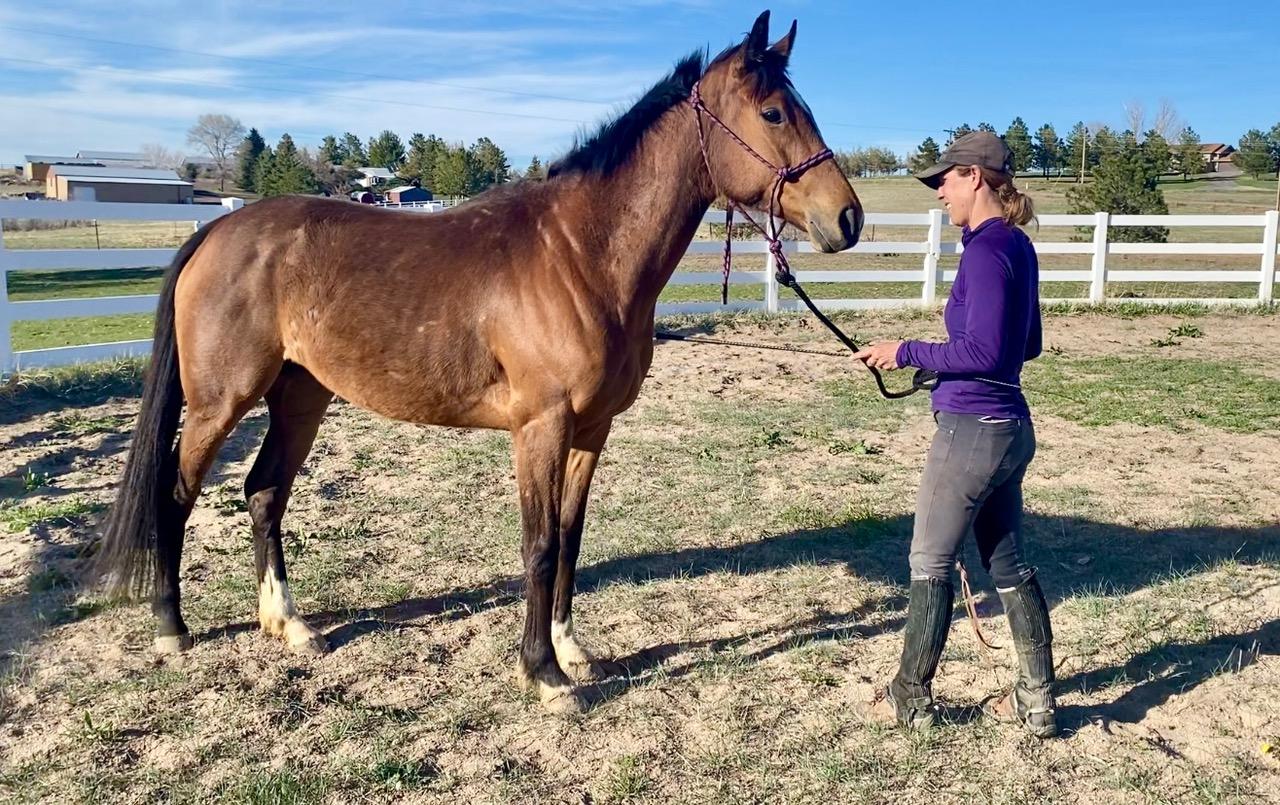 Ashley working with Kittie on respecting “the bubble.” Photo by Britany Chism.

Most importantly, across all of these activities, Kittie is finding even greater confidence in herself, and the things that spooked her mere weeks ago have once again become far less threatening. The rollercoaster is on its way up again. 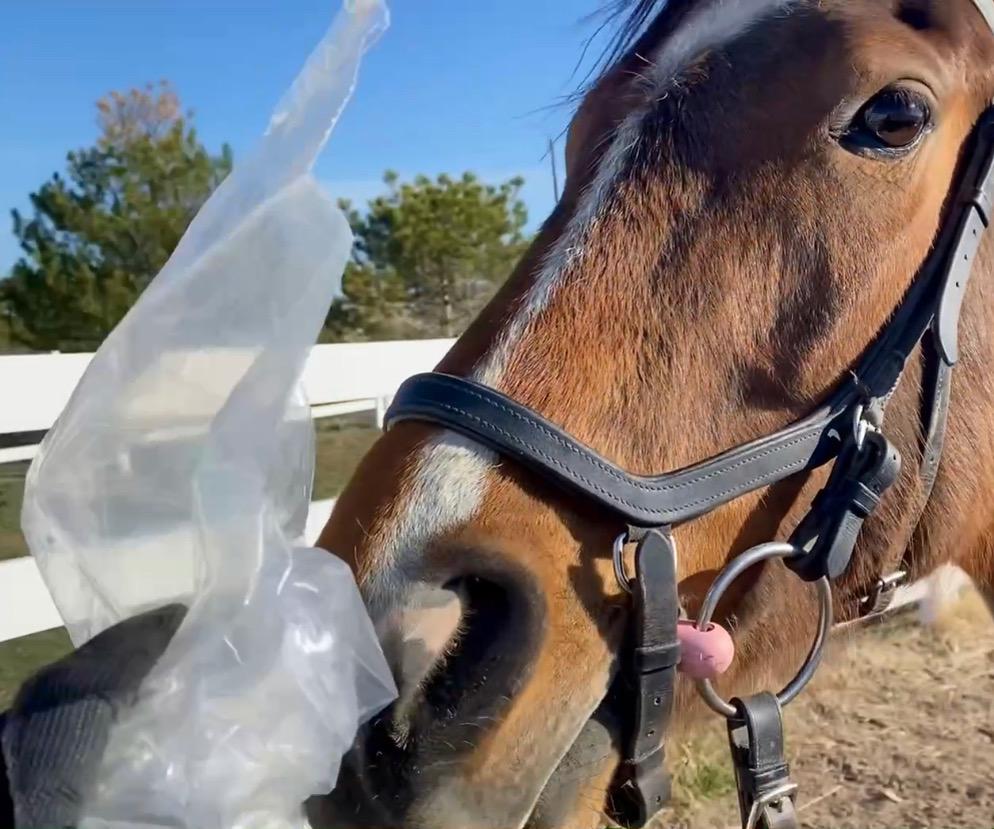 Kittie conquering a piece of plastic that blew through the arena. Photo by Britany Chism.

I am an amateur, always will be an amateur and, like the good majority of you, have no aspirations of becoming a professional. Being a professional and being a trainer are both complementary and different, and I’m grateful that the Retired Racehorse Project has distinguished this at the Thoroughbred Makeover. They call all of their participants trainers. Whether you’re an amateur or have a string of students, at the end of the day we’re ALL trainers. We are working to educate our equine partners and set them up for success in what will eventually be their second or even third career down the road, and that is the very definition of the word. It behooves us to continue to learn from others, so I gladly bring in reinforcements.