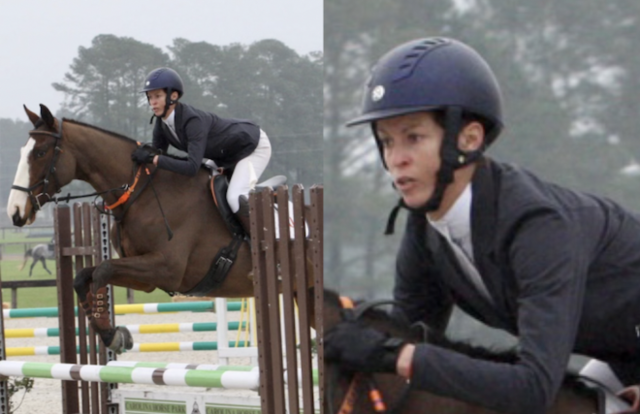 May 7, 2021DeAnn SloanContributor#BEST OF JUMPER NATION, Game Face OnComments Off on Best of JN: The Anatomy of a Jump Face

“I make faces like I am going to commit a murder, have a secret identity as Quasimodo the Hunchback of Notre Dame, ate something that tastes really bad, or am actively dying when I ride. I have won every internet Jump Face contest ever run.”

This article was written by guest writer Elena Perea.

I used to know this woman whose face over every single jump—not exaggerating—was this adorable grin. She always looked like she was having SUCH an amazing time!  I think show photographers would seek her out just for the purpose of documenting her apparent glee.

I have never had that happen to me.

This is probably because I make faces like I am going to commit a murder, have a secret identity as Quasimodo the Hunchback of Notre Dame, ate something that tastes really bad, or am actively dying when I ride. I have won every internet Jump Face contest ever run. I have seen people literally have their drink come out their nose when they see “the face.”  Yes, it’s that bad. At rest, I’m a relatively normal-appearing human. I have a fairly symmetrical face. I don’t have a neurological condition.  So why, in the name of all things relevant, does my face do what it does when I go over a jump?

Faces are pretty amazing parts of our body. We use them to communicate. We have forty-two individual muscles that contribute to facial expression, and each one is important to convey our feelings. They have an entirely separate innervation than the rest of the body—it actually comes directly from the brain via cranial nerves rather than from the spinal cord. We have voluntary control of our faces… most of the time. There is plenty of data out there that positive facial expressions improve your mood and performance in day-to-day activities (so maybe I should practice a smile for dressage). But interestingly, recent research shows that employing a “game face”—a frowning or intense expression—improved performance on cognitive tasks. Could I just be trying to improve my performance? Clearly. “Motor overflow” is a term used to describe involuntary movements that occur when you are also making voluntary movements. Under normal circumstances, this is seen only in kids or the elderly. However, you can make motor overflow re-emerge if you require a person to engage their entire brain.

So my jump face is evidence that I am totally engrossed with the sport when I’m jumping, that I’m 100% dedicated to the task in front of me.

At least that’s what I tell myself.  I just hope my face doesn’t freeze that way. I’ll leave you with one more epic photo: