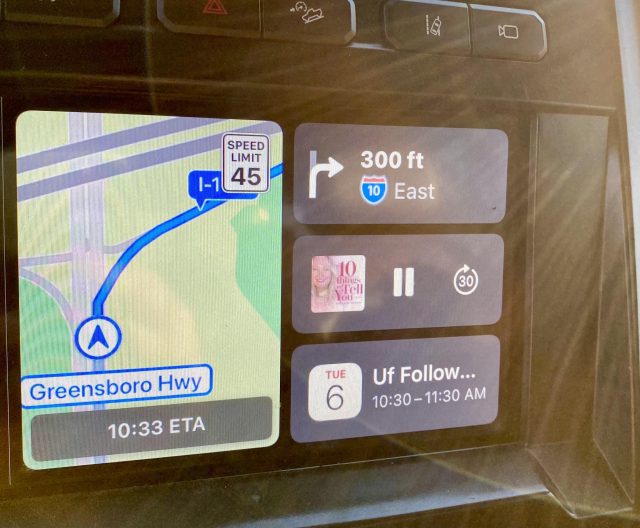 April 22, 2021DeAnn SloanContributor#RETIRED RACEHORSE PROJECTComments Off on Not Giving Up: Libby & Spider

“I’ve felt terribly guilty about not doing enough, but I realized yesterday that I just simply haven’t had the room in my head to see that it gets done . . . I think it’s time to do a reevaluation of priorities and to get back to the life of a Crazy Horse Girl…”

Following the announcement that the Retired Racehorse Project‘s 2020 Thoroughbred Makeover and National Symposium, presented by Thoroughbred Charities of America, will be postponed to 2021, competitors have been working to decide what comes next for them and their mounts. Today, blogger Libby Henderson discusses moving forward with Spider’s rehab and holding onto hope of going to the Makeover.

Since I last wrote a blog post, we’ve survived Red Hills in the time of COVID (if we never have another year where we are taking over 400 people’s temperatures every day as they arrive at the show, it will be too soon!), started planning next year’s show, and taken Spider (JC Gossamer) back to the University of Florida for his follow-up appointment.

In the meantime, he’s lived in the field with his buddies, muddy and feral. He’s cranky and misses his routine, and I’ve found I need to keep my “good behavior stick” close by to remind him that he really doesn’t want to push me around too much. 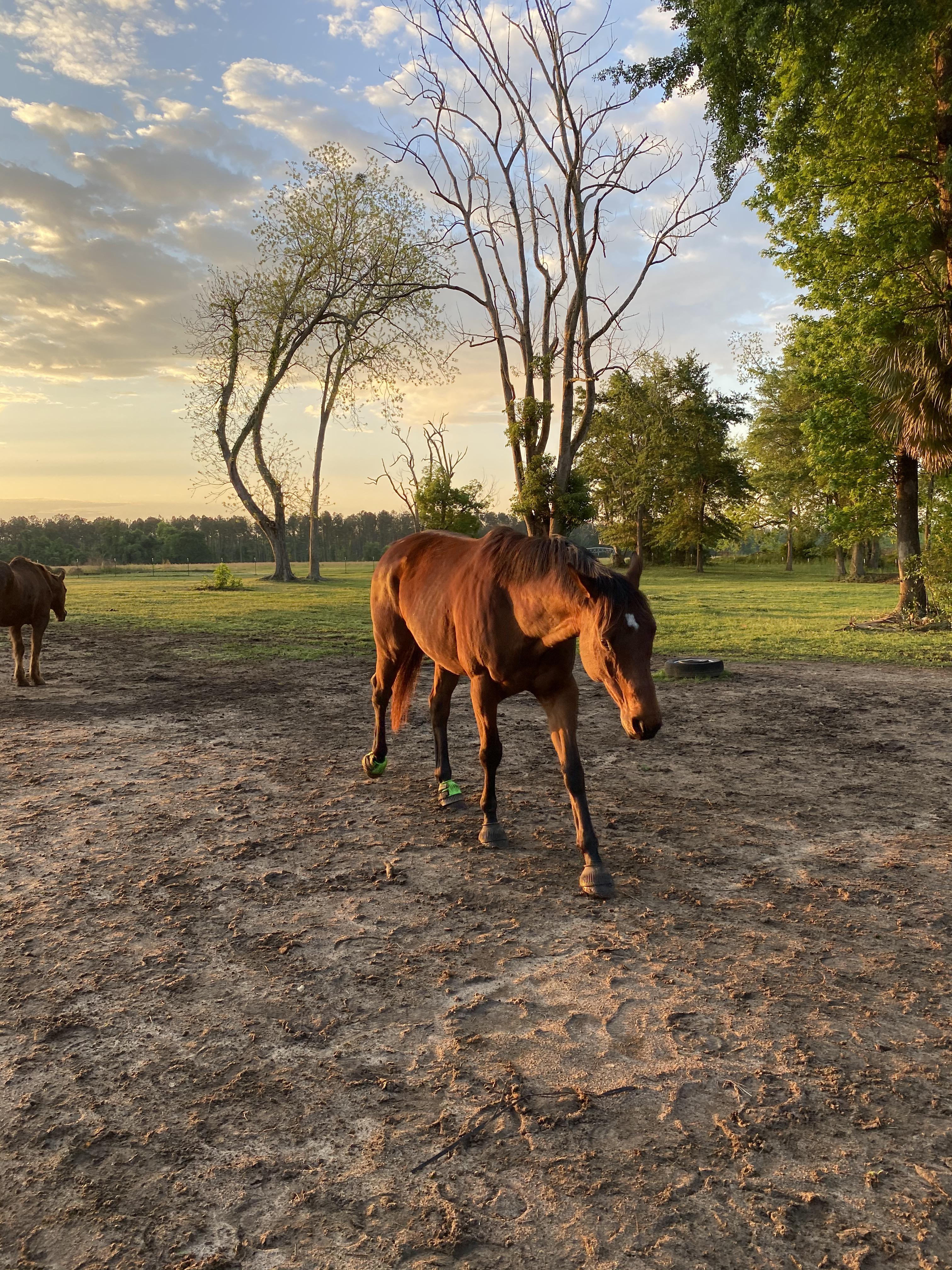 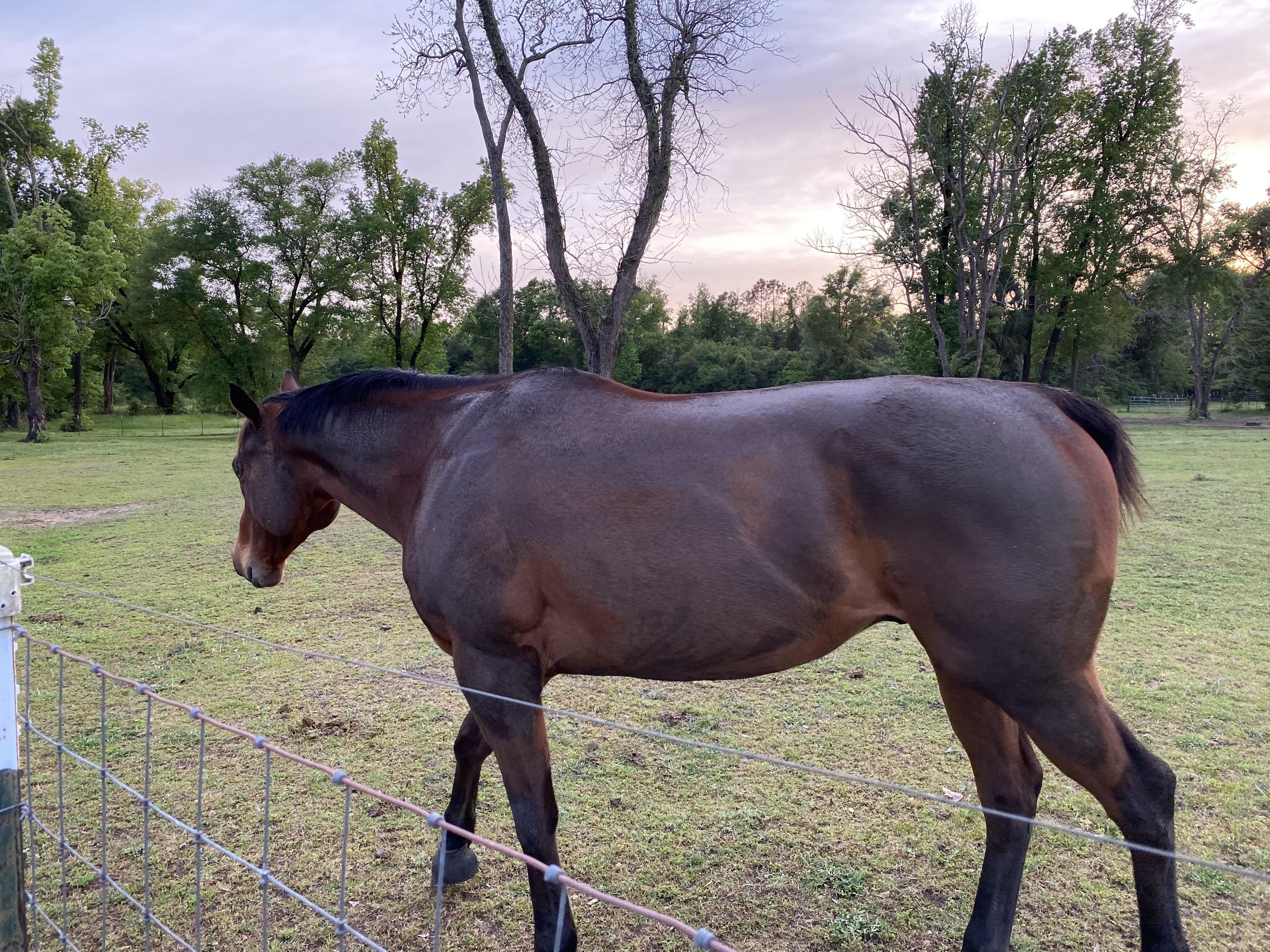 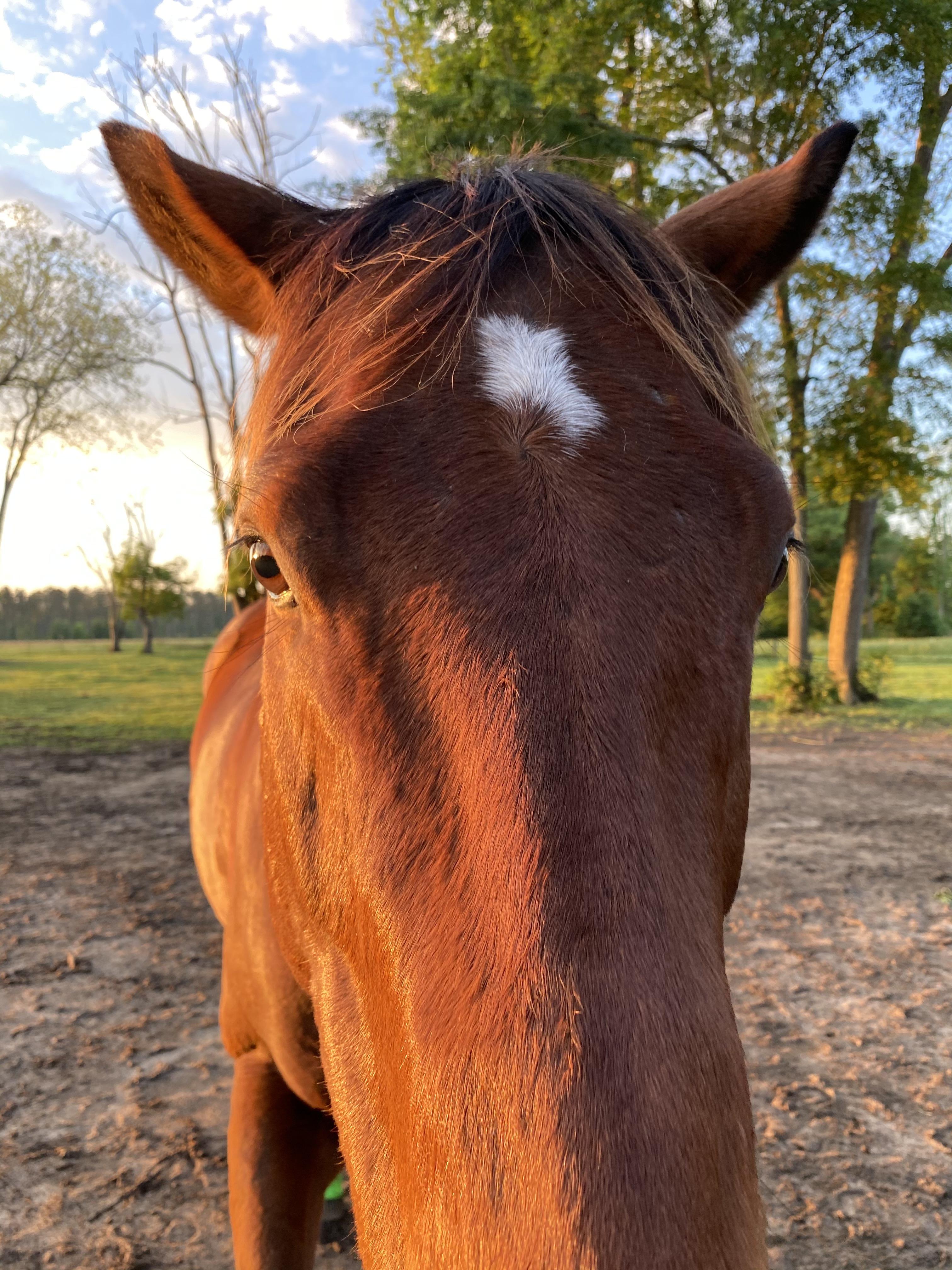 On April 6, we went back to the Large Animal Hospital at the University of Florida’s Veterinary School for his eight-week checkup. I have a longstanding relationship with the LAH at UF as somehow, over the years, I’ve managed to acquire horses that need their expertise. When I posted the picture of my truck’s navigation system showing the way on the trip down, a friend commented that as often as I’d gone there over the years, my truck should know the way on autopilot! 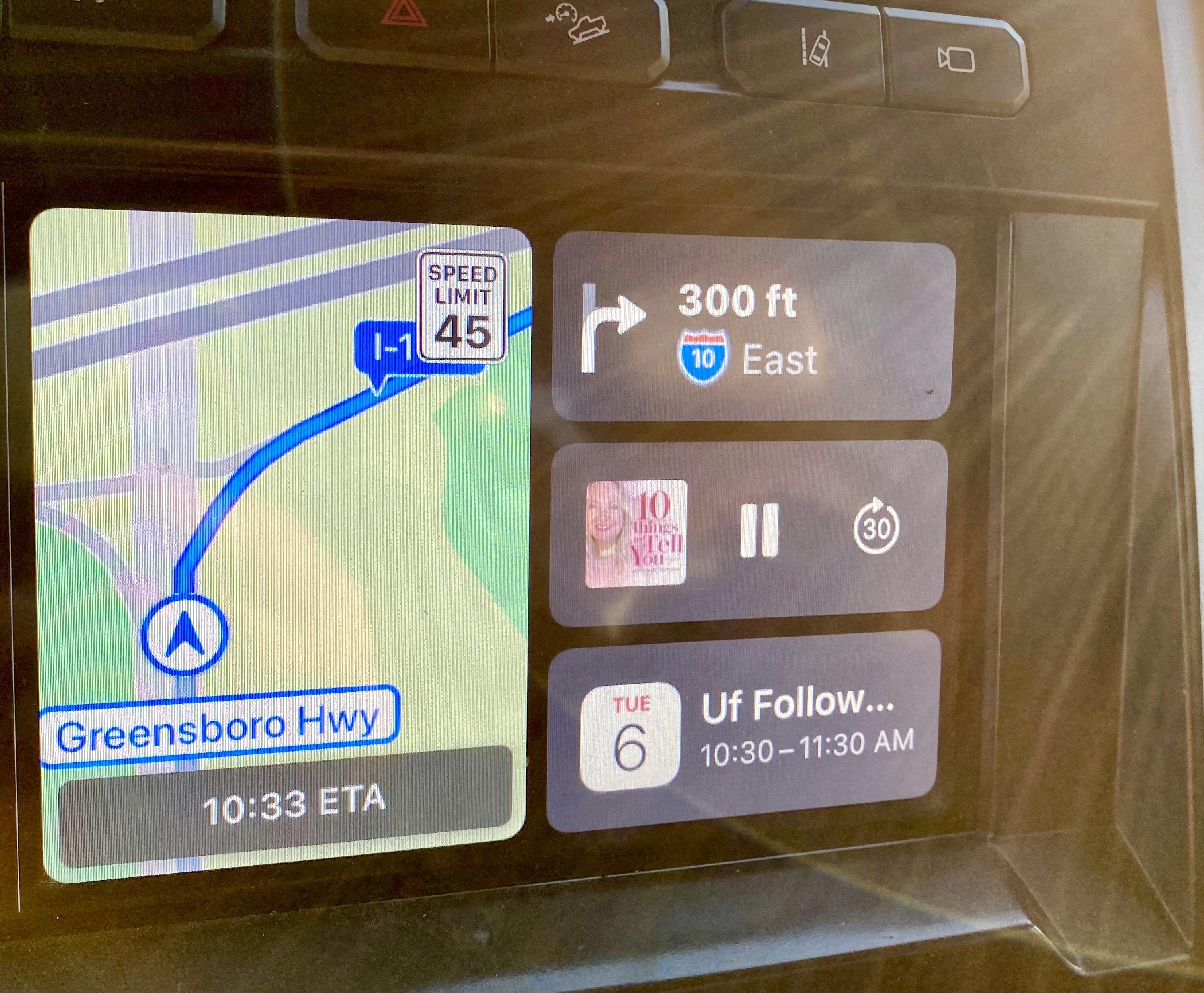 Even if the reason for going down to UF is a stressful one, it is always educational for me. In regular, non-COVID times, owners are able to go with the horse to the day stall and observe most of the entire process. Every veterinary student does at least one rotation with the large animal service, and the student begins the intake process, and interviews the owner for a history, and takes the vital signs of the horse to start the process. It is so interesting to see the veterinarians of tomorrow learning, not just about horses as patients, but also learning the process of interacting with clients, all while watched over by some of the best veterinarians in the business.

Dr. Ali Morton has been doing lameness exams for me and helping me to differentiate between real issues that my horses have, and issues that live mostly in my brain, since 2003. Unfortunately for me, she typically validates my feeling that a horse is Not Quite Right and finds the actual cause of the problem. Watching her work with and teach vet students at the beginning of their journeys is fascinating. She doesn’t just do a good job of finding what the NQR issue is, she encourages the students as they learn how to see what she sees, and to feel what she feels.

During COVID though, the protocols prevent owners from participating in the exams or watching the process. So, instead of being that annoying owner standing in the back and watching as Spider is trotted on a hard surface and put through his paces in the amazing lameness arena, I sat outside in the parking lot. Magnus, the Amazing Mas-Scottie I introduced last month, went along for the ride, and was quite good at supervising me while I used the time as wisely as I could, and reorganized the horse trailer. 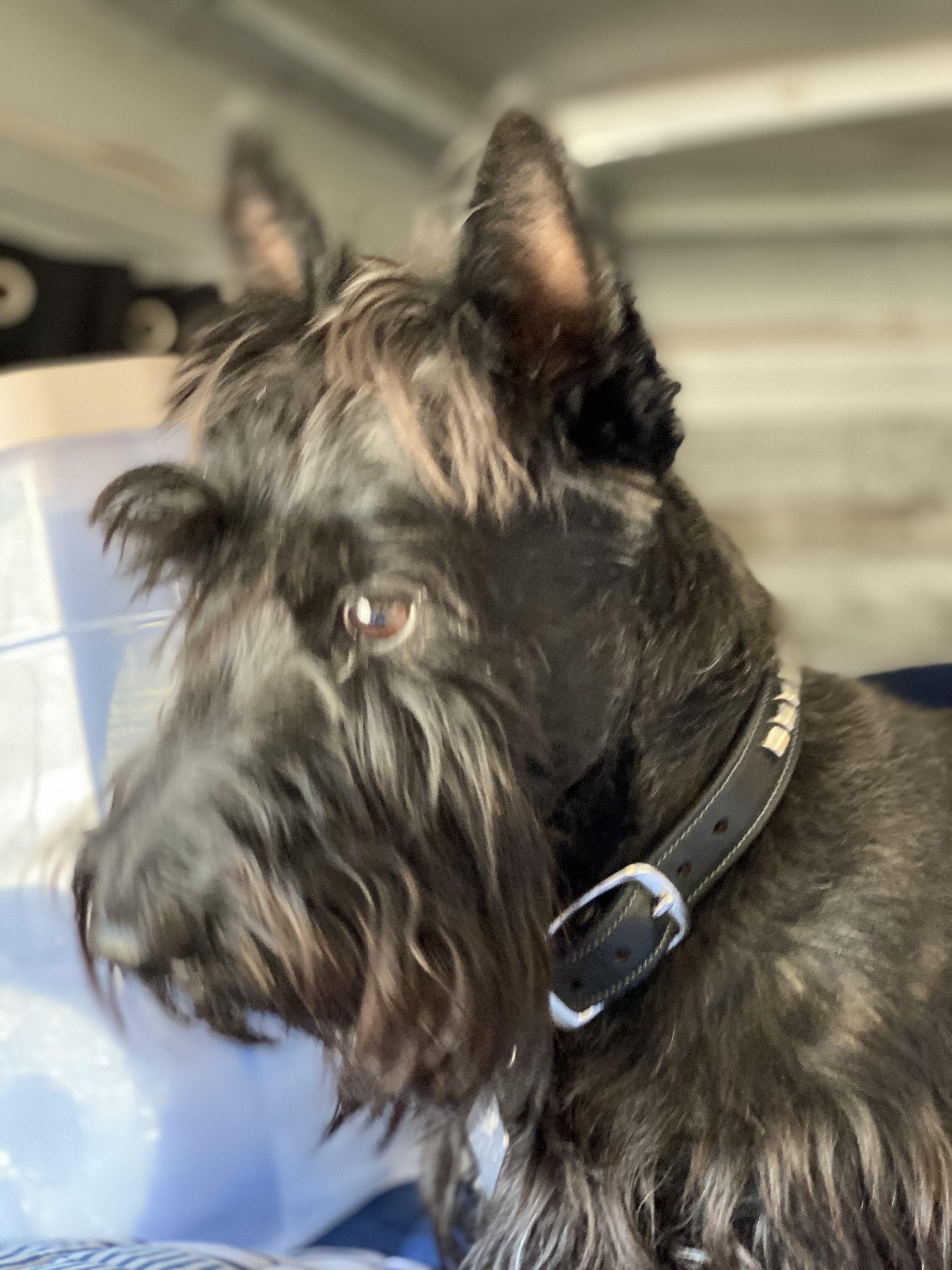 Magnus on the bed on the gooseneck, watching as I work. Photo by Libby Henderson.

After several hours, Dr. Morton called and gave me her report. Spider is closer to “sound” than he was eight weeks previously, and on ultrasound, the outside branch of his high suspensory was smaller, but the inside branch was larger than it was before. This was, as she put it, an overall net positive, and we were going to be cautiously optimistic that he could continue to improve.

She did not clear us for a full return to work, but she also did not tell me to withdraw from the Makeover – yet. The crucial part in whether he continues to improve will be his rehab. His rehab was going well when Camille was doing it with him, and has been, so far, nonexistent since he’s been home with me. Sigh.

I promised Dr. Morton I could get it done, and honestly, it isn’t hard work or complicated. Well, when you see the list of what the schedule is, it looks complicated, but it really isn’t. What it takes is dedication and time. And I have failed at making room in my schedule to get it done. 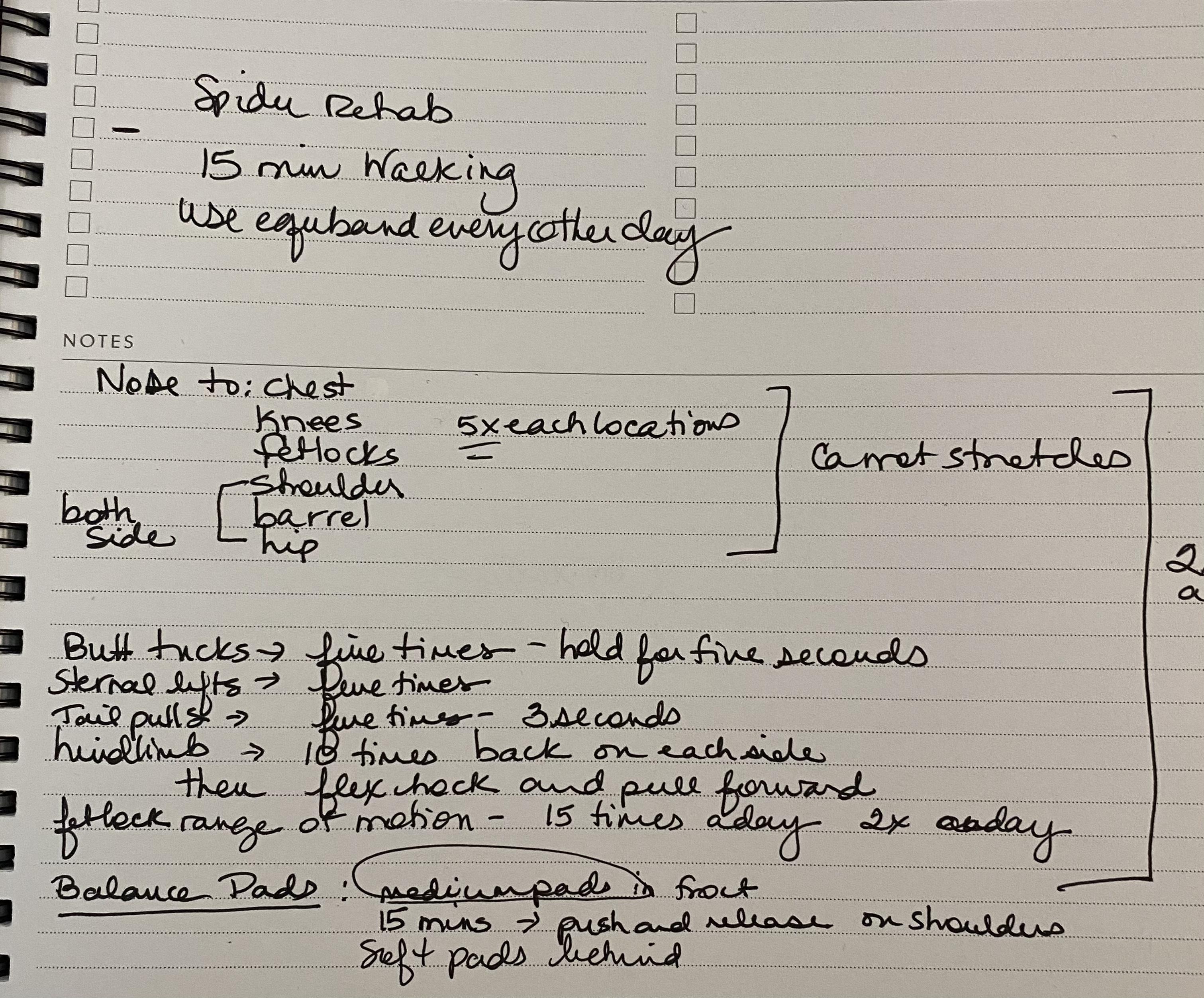 I’ve thought a lot about why I haven’t made it happen. Obviously, as I’ve written about for more than a year now, the Makeover is a Goal That Matters to me. I’ve been frustrated that the path to preparing for it hasn’t been linear, but I know deep down that no path to a Goal That Matters ever is.

I had a “light bulb” moment yesterday, as I pondered whether there was even anything in this last month worth writing about. There are many memes and jokes about “horse girls” and how they lose hours at the barn, even when stopping in for “just a minute” or how they can bore everyone they talk to with exhaustive details about Dobbin’s latest adventure. My revelation was that maybe it has to be an interest bordering on obsession to be able to do it even passably well. The last three months have been very crowded with stressful events, and I’ve found that even when I have physical time and space in my calendar, I have chosen to curl up with a book and take a nap, rather than going to the barn in my backyard.

I’ve felt terribly guilty about not doing enough, but I realized yesterday that I just simply haven’t had the room in my head to see that it gets done. I realized that I’m allowing other stressful situations to take over all of my focus and that my horses and time spent with them is being crowded out by other noise in the form of problems. These problems relate to other things that are also important to me. However, I think it’s time to do a reevaluation of priorities and to get back to the life of a Crazy Horse Girl and figure out how to deal with those things in a way that moves my horse time, and in particular Spider’s rehab way up the priority list. Because we aren’t giving up on the Makeover. Yet.