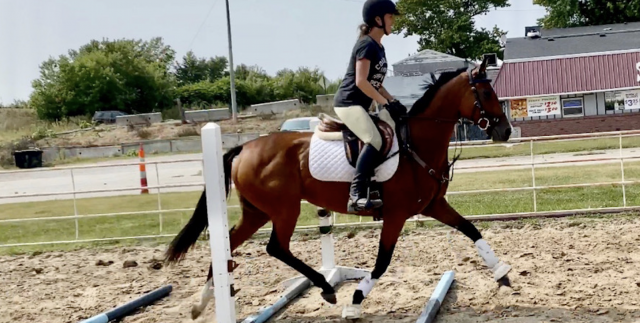 “Kittie … was high octane, oozed class, and had a brain to boot. A veritable sports car, I like to think of her as a Maserati. I was instantly in love.”

For 480 accepted trainers, the journey to the Retired Racehorse Project‘s 2021 Thoroughbred Makeover and National Symposium, presented by Thoroughbred Charities of America, has begun! Over the next eight months, four of those trainers will blog their journeys, including their triumphs and their heartbreaks, successes and failures, for Horse Nation readers. Today, meet blogger Britany Chism and her horse Kittie, JC Itybityquikasakity.

This last year has been a whirlwind, and not just for the obvious reasons (of course, COVID was a shock to the system), but for the small incremental shifts that have added up to life operating in a distinctly different way. The road doesn’t always go where you expect it to, and in 14 months, mine has shifted from a “no horse existence” to making a bid for the Retired Racehorse Project’s Thoroughbred Makeover.

Just over a year ago, my friend Jenn asked me to take on her OTTB, Gibbs (JC Pavlick) while she was pregnant. What followed was comical, hard as hell, rewarding and a very necessary re-entry into the horse community after having been largely absent for almost four years.

During that time, I had also gotten married, combined households, became a stepmom, adopted another dog and built a life that was not scheduled around horses. Coming back to it was not as simple as it had been in the past. It would take more than a little adjusting, and it wouldn’t just be me that was making the adjustments. This is a lifestyle, and those in our lives must live it too, so this opportunity with Gibbs was perfect for all of that and more. As my husband puts it, “this is part of my soul,” so coming back to it was only a matter of time. Thank goodness he gets it.

Re-entry boot camp started in February of 2020 — sore muscles attempting to reform into some semblance of riding muscles, schooling videos that showed my embarrassingly defensive (read: left behind!) position over jumps, a show season stunted by COVID, and more fun than I can express in 1200 words.

Gibbs reminded me what it meant to care for and partner with 1400 lbs of energetic, not always conforming, behind-the-leg and charismatic horse flesh — and I’ll always be grateful to him (and his mom) for bringing me back.

He was a VERY different ride from my mounts in the past and made me a better rider for it — he’s what we lovingly refer to as the F-450 SuperMax. Massive amounts of power, sometimes slow to get rolling and can’t turn on a dime, but once the engine is properly engaged, you ARE going and you WILL get over the fence with room to spare. He demanded perfection. No dawdling and no last-minute decisions — you plan your ride, you commit and go. 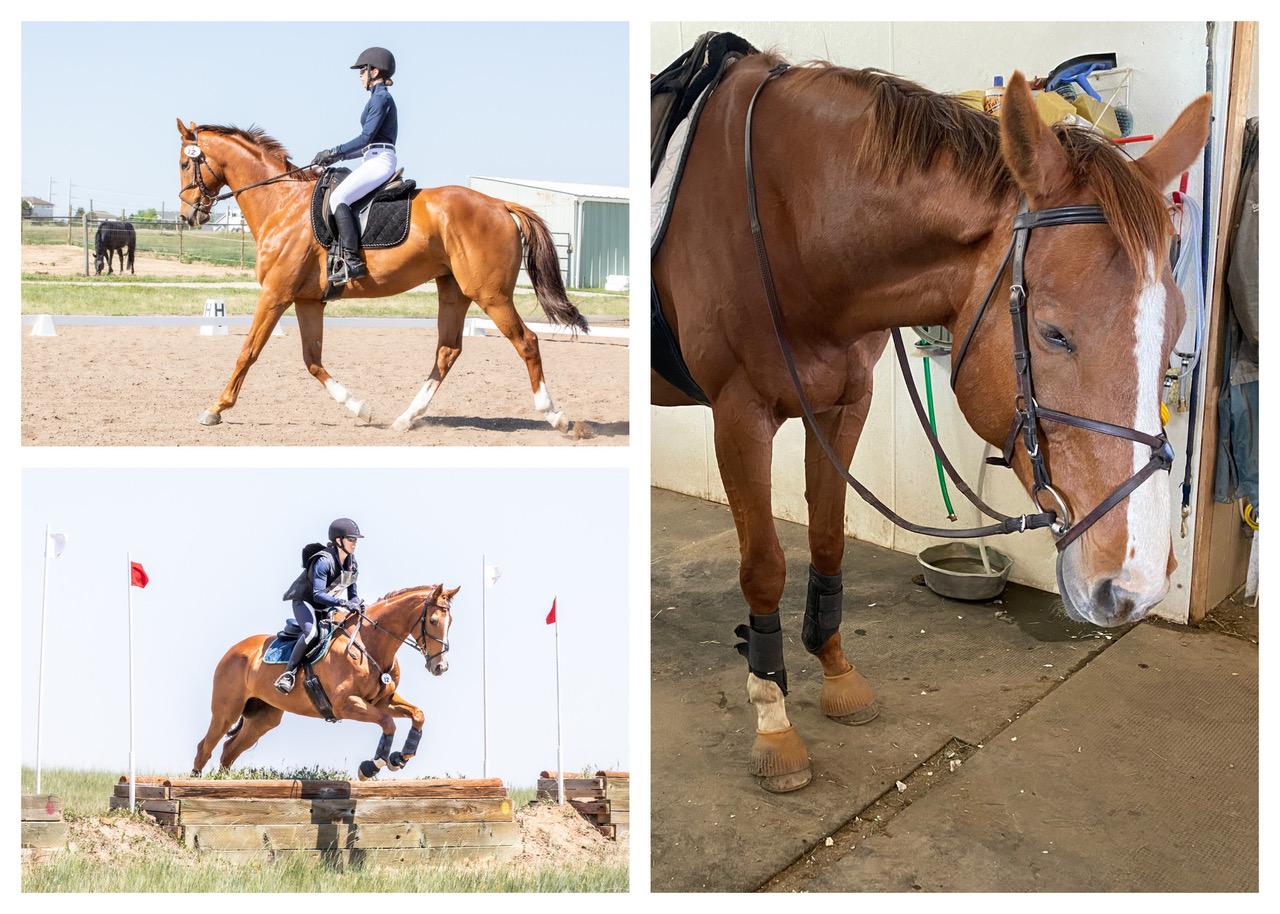 Dressage at our second schooling show of the season and on cross country. Photo by Susan Sheldon Harvey. We frequently joke that Gibbs is the anti-Thoroughbred — he’s a very relaxed individual, and often has to be coaxed out of a nap to go to work. Photo by Britany Chism.

In my past, I rode sport cars, and we’re talking the Porsche GT3-types. While I am speaking of an actual flesh and blood horse, if you don’t know the car I’m referring to, look it up, and if ever given an opportunity to drive one, definitely do. But I digress…

Enter Get Tricky, an OTTB war horse, who is still the fastest back I’ve ever been blessed to sit upon. He was the real deal. Made for speed, exceptional handling and steering, and the adrenaline when that engine was engaged…GT3 indeed. He was my heart horse. After he passed away, I promised myself I’d find a relative of his one day, and if not for that, I wouldn’t be on this journey to the Thoroughbred Makeover. 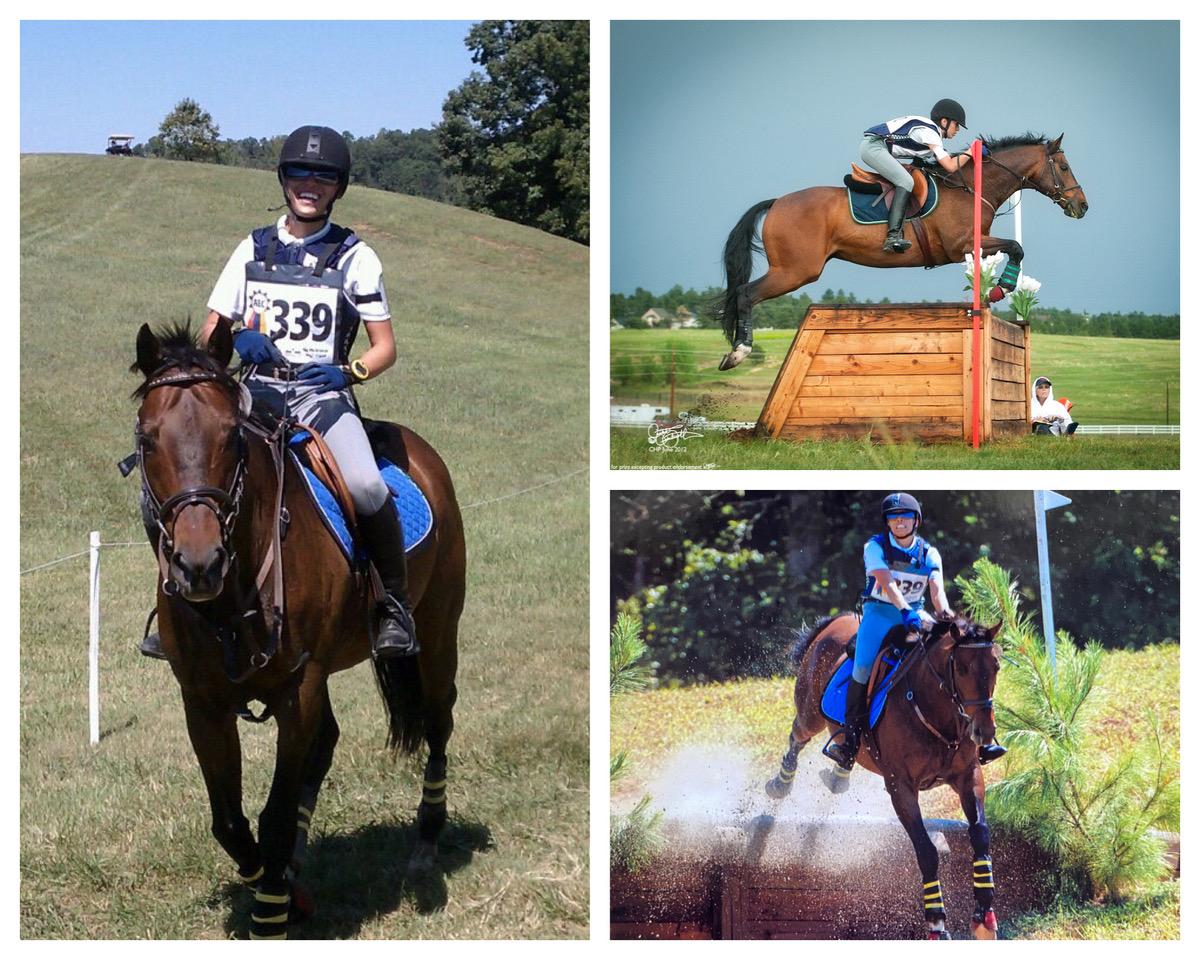 Two of my favorites of Tricky from the AECs 2011 at Chattahoochee Hills in GA. A bank on course – for two years I couldn’t get that horse to drop nicely off, he thought every bank deemed an exuberant launch. Due to my facial expression, my friend, Jenn, deemed that I NEEDED that photo. Photo by Shannon Brinkman. Grinning – we’d just finished XC and I could swear he was smiling too. Photo by Jennifer Boggs. Over the table at the Colorado Horse Park in 2012. Photo by Cristy Cumberworth.

Thus in August of 2020, knowing that I would have to give him back in a few short months, I took everything that Gibbs had helped me relearn, all of the qualities I had appreciated about Tricky, and I began the search for my own horse.

After following EVERY Facebook rehoming post for a few months, and trying multiple horses near me in Denver, I found my way to Brit Vegas Gengenbach’s page for Royal Fox Stables, and on it saw two very cool, but very different prospects. One was an eight-year-old war horse gelding by the name of Saint, and the other a three-year-old high-headed, 14.3hh filly with fancy footwork named Kittie (JC Itybityquikasakity). Both were RRP-eligible (“whatever that meant,” I thought at the time), but perhaps more interesting, was that Kittie is distantly related to Tricky on her sire side.

I made the trek out to Nebraska in September to try them. Saint was very appropriately named — he was bombproof, but we just didn’t click. Kittie, on the other hand, was high octane, oozed class, and had a brain to boot. A veritable sports car, I like to think of her as a Maserati. I was instantly in love. 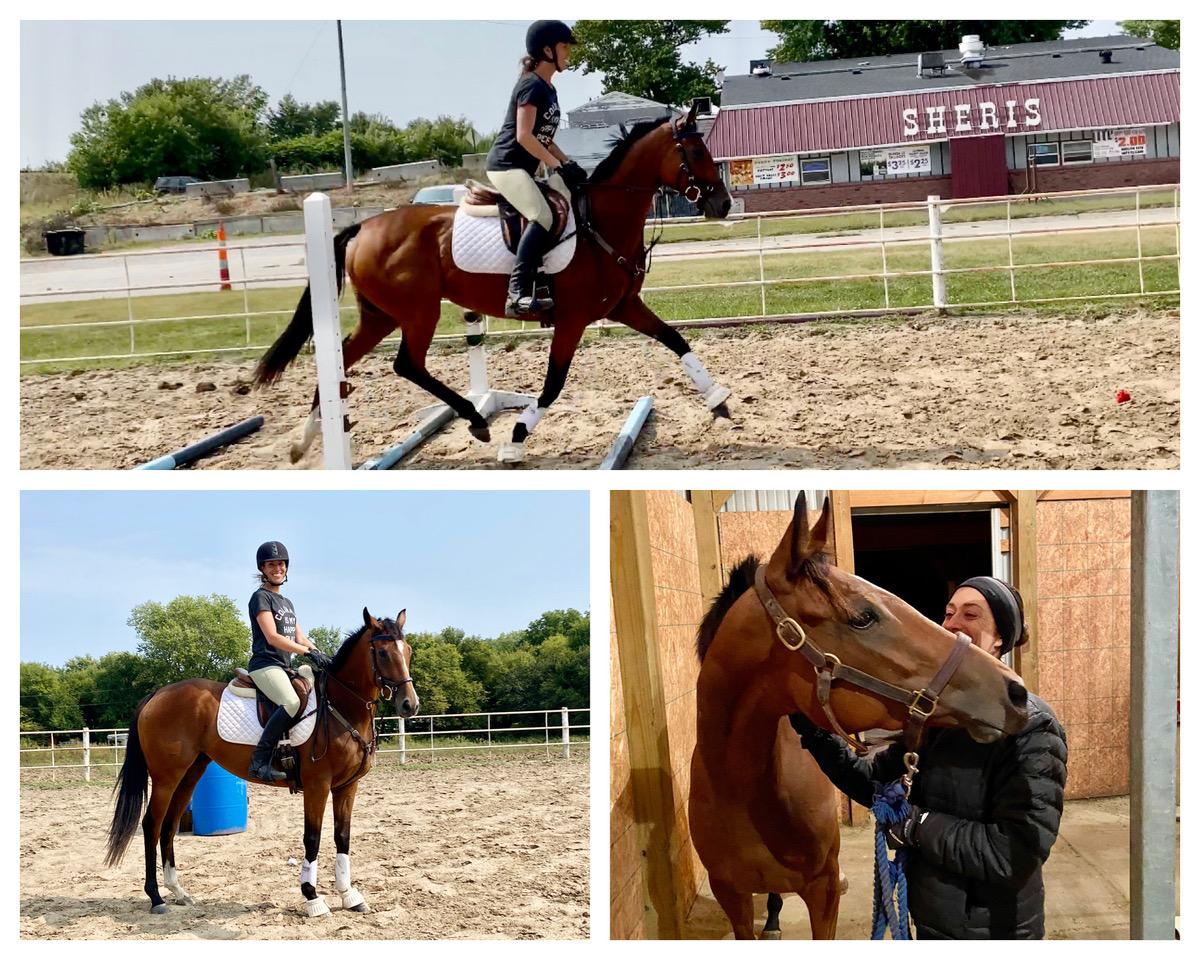 Trying Kittie in Nebraska — her fancy footwork, and her quick-to-listen attitude was an easy sell. Photo by Brit Vegas Gengenbach. She arrived at her new home a little late in the evening, but settled in quickly. Photo by Kyle Chism.

I had a pre-purchase exam done, she came home a week later and after having quickly proved she was everything I’d hoped she’d be, I faced a choice. Should I start slow, and maintain her eligibility for the Thoroughbred Makeover? She decided for me.

After just two weeks of getting acquainted, she landed herself a nice puncture wound to her left front cannon, was placed on stall rest and required daily bandage changes for a month. I still had nine rides before I hit the eligibility limit (no more than 15 rides before December 1), and by the time I got back on her, it was November.

Thankfully, I found that Kittie, like most racehorses, was very well started. Groundwork was a breeze, she’d stand patiently when tied, great with her feet, and completely ignored wraps on her legs (a blessing given that injury). But that’s not to say we haven’t hit some roadblocks. Most OTTBs come with one extra-large gas pedal, sticky, sometimes even faulty brakes, and REALLY loose steering — Kittie was no exception! There were a number of days we didn’t even leave the round pen. One day in particular, a friend had come to check her out, and Kittie conveniently forgot that the leg meant go forward (despite having clinched this concept a week prior) and decided that stubbornly planting her feet was the trick of the day.

We’re now at the end of March, and between the snow and growing pains, there are some days it feels like we’re going backwards. The poor thing is in that awkward growth phase — some days her right side is higher than her left, and front to back changes daily too. We still haven’t cantered much and when we do it’s usually preceded by a kick from behind, followed by a few strides of gold, and ends with some crow hops. In race car terms, we haven’t even made it out of the pit lane and her alignment is off.

Yet she maintains a great attitude and a desire to join up. I can work with that. 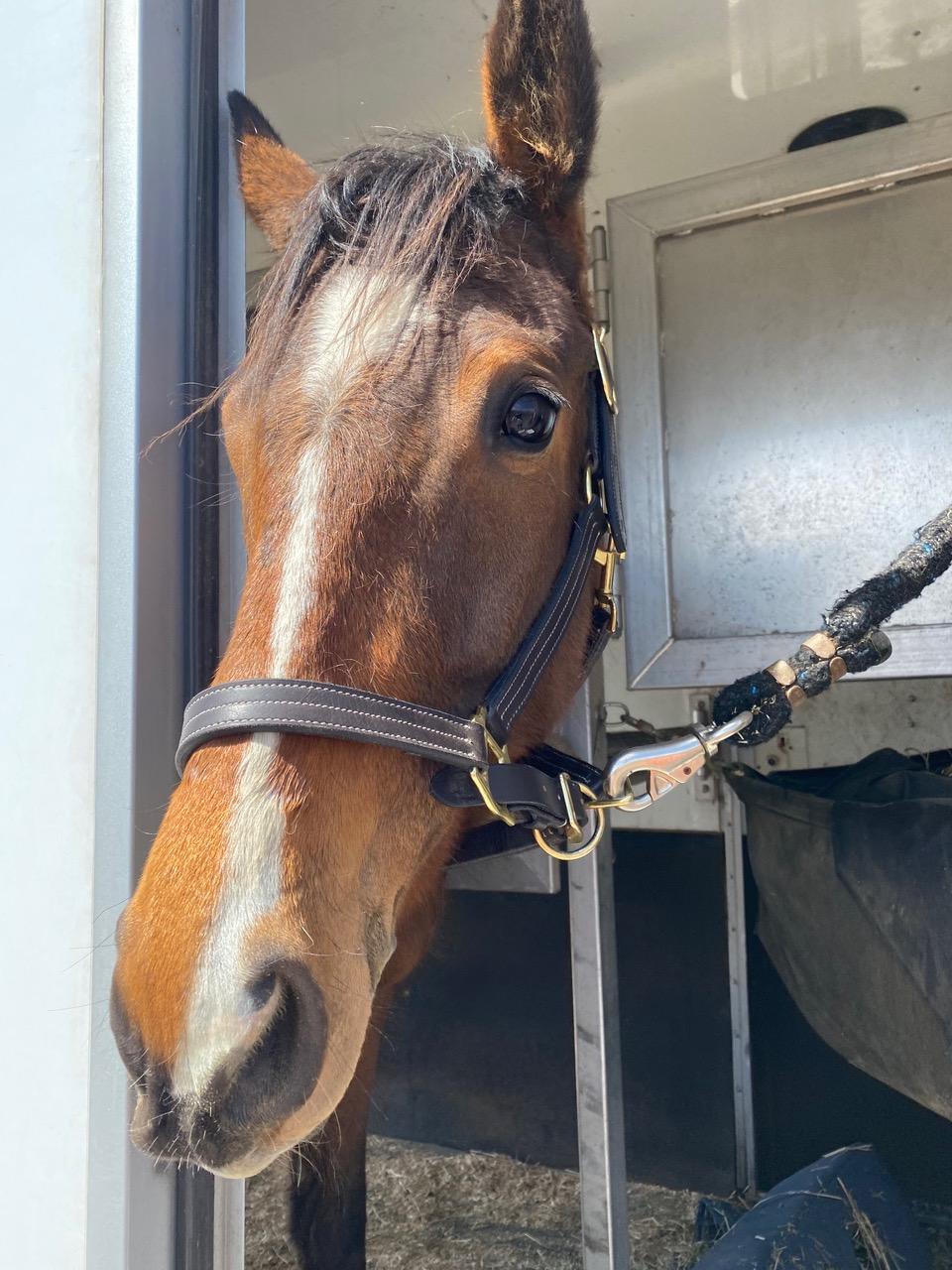 We might not be cantering but she’s excelling elsewhere… Grateful to those who started Kittie – faced with a trailer she’s never seen and she marched right in. Photo credit by Britany Chism.

All Makeover trainers are invited to join a private Facebook group to commiserate, share ideas, and cheer each other on. In it, they frequently use the hashtag #StayInYourLane — a valuable reminder. Especially as I see posts of other 2021 Makeover horses who are going to their first shows, or already schooling cross-country, I have to remind myself… we’re on OUR road and I’m confident we’re building a lifelong partnership. We’ll get there, speed bumps are just part of the experience. “Sometimes you need to go slow to go fast…”