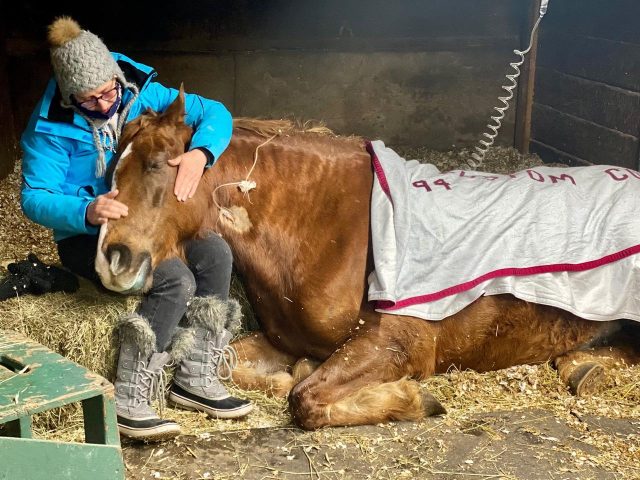 In the midst of an EHV-1 outbreak, Haygain Hay Steaming helps the hard hit farm Venturing Hills cope with the symptoms and ease some of the horses’ discomfort.

Five weeks after EHV-1 took its first horse at Venturing Hills Equestrian Farm, another two had been lost despite remarkable efforts to reverse the highly aggressive and infectious virus’ course. Staff and volunteers at the Luskville, Quebec boarding, training and lesson facility are living at the barn to monitor and care for the horses.

Taking temperatures every two hours, administering anti-viral medications and implementing extensive biosecurity measures have been round-the-clock endeavors since the first victim, Eddie, was lost on Feb. 3.

As of March 16, one horse believed to be recovered had spiked a new high temperature and was fighting for its life. That further extended the horizon on which a sigh of relief could confidently be taken.

“It was like watching a drunk person try to walk a straight line,” Venturing Hills’ Rae Anne Becke told webcast host Laura Kelland-May in describing Eddie’s “out of the blue” symptoms that afternoon of Feb 3. From that incident around 4:30 in the afternoon, and even with the support of emergency veterinary care, he was gone by 11 pm. Shortly after, tests determined it was the neurological strain of the EHV-1 virus.

EHV, the equine herpesvirus, is endemic to the equine population: it resides in most horses in a dormant state, but can be reactivated and shed in respiratory secretions. The EHV-1 strain associated with neurological disease is rare. It was this variant that showed up at Venturing Hills and led to outbreaks in Europe and the U.S. in February and March.

Although EHV is a respiratory disease, respiratory symptoms including nasal discharge, cough and labored breathing are not always early warning signs. They were, however, for some of the affected horses at Venturing Hills.

In the case of Rae’s beloved 6-year-old pony, Winnie, it was a cough. In hindsight, the pony’s progressively worse cough was probably the earliest sign of EHV-1, Rae reflects. Initially it presented without a temperature, the more common symptom of the disease. It was disturbing, especially when medications, supplements and other treatments did not lessen it. Yet it did not raise red flags regarding infectious disease. A few days later, a fever caught up to what had progressed to a cough producing “chunks of blood.”

In pre-COVID and pre-EHV-1 times, Rae juggles management of Venturing Hills horses, barn and thriving multi-level lesson program with an eventing career in ascent mode. Selena O’Hanlon is one of her coaches and it was through the Canadian Olympic eventer that Rae knew the benefits of Haygain Steamed Hay. On Selena’s recommendation, Rae’s father, Peter Becke, “being the hero that he is,” purchased two full-bale HG2000 Hay Steamers delivered in a rush.

Since early in Venturing Hills’ ongoing odyssey, the steamers have been going nearly 24 hours a day, Rae reports. Haygain Hay Steaming rids up to 99% of the dust, mold, fungi, and bacteria found even in hay of good nutritional quality. Any of these microscopic irritants could become a final straw for respiratory and immune systems already burdened by EHV-1 in its respiratory-only form or its more severe neurological manifestation.  Even if the tiny particles don’t contain pathogens, their presence in the respiratory system can irritate and inflame the surface, restricting airflow and easy breathing.

In Winnie’s case, steamed hay was the only measure that reduced the severity of her cough. For the rest of the horses, steamed hay’s appetizing smell and taste continue to help with challenges common to any illness: loss of appetite and dehydration. The increased appeal of steamed hay and a moisture content three times that of dry hay address both.

“Another beautiful thing about the hay steamers is that we can share the hay nets because they are safe, clean and ready to go,” Rae adds. The highly infectious nature of EHV-1 requires extensive biosecurity measures. These include isolating sick and healthy horses and those awaiting test results, and not sharing any equipment or surface that could be a fomite for the shed virus. What sounds manageable on a list of protocols is a complicated, labor-intensive challenge to enact 24/7 in a barn with 40 horses. Using steamed nets greatly eased the feeding process. “That alone made the hay steamers worthwhile,” Rae says.

Forward As A Family

The loss of any horse is tragic. At Venturing Hills, the three losses directly impact an unusually broad range of people because they were stars of the equestrian center’s beginning and introduction-to-competition program. “We wanted to share horses and riding with everyone,” says Rae of why they began the inclusive and welcoming riding school several years ago. “Those horses enabled so many people to get involved in the sport.”

One of those students co-leases Winnie and has been by the pony’s side throughout. “She and her mom and sisters come every night to brush Winnie and walk her and provide that love and care,” Rae says. The family’s concern is mirrored on a broader level by the community response to a GoFundMe campaign to help cover the enormous costs of round-the-clock care, anti-viral and other medications, extra labor and a long list of additional expenses. These piggyback months of lost income during COVID-19 lockdowns.

Venturing Hills is a family endeavor in the broadest sense. “Yes, we compete in Florida, but we also offer riding in whatever form everybody wants,” Rae explains. “Whether we are participating in the Ottawa Valley Hunt or riding out on trail, our team is our family at the farm.”

That family has pulled of a remarkable feat in keeping their losses to three horses. Although the road to anything resembling normalcy is long, supporters far and wide hope that the worst is behind them.

Donations to help cover Venturing Hills’ extensive costs are greatly appreciated and can be made here:  https://www.gofundme.com/f/help-the-beloved-horses-of-venturing-hills-farm