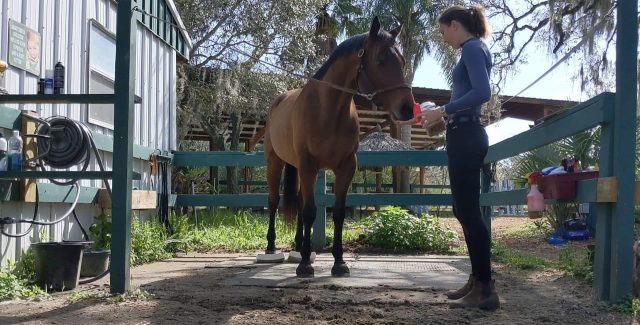 “In the words of a friend of mine ‘Kindness is free, give it to everyone’ — that is a good motto always, but especially to embattled horse show volunteers who have given up on sleep, so that you can have a wonderful time showing your horses!”

Following the announcement that the Retired Racehorse Project‘s 2020 Thoroughbred Makeover and National Symposium, presented by Thoroughbred Charities of America, will be postponed to 2021, competitors have been working to decide what comes next for them and their mounts. Today, blogger Libby Henderson discusses volunteering and an event near and dear to her heart: Red Hills Horse Trials.

When we last left you, Spider (JC Gossamer) was with my friend Camille and had started his rehab program for his high suspensory desmitis. He was a very good boy and did his exercises — he did his hand walking, he did all of his stretches, he was learning about the Equiband, and the Sure Foot Stability Pads (staying on those for the required amount of time required LOTS of cookies!). 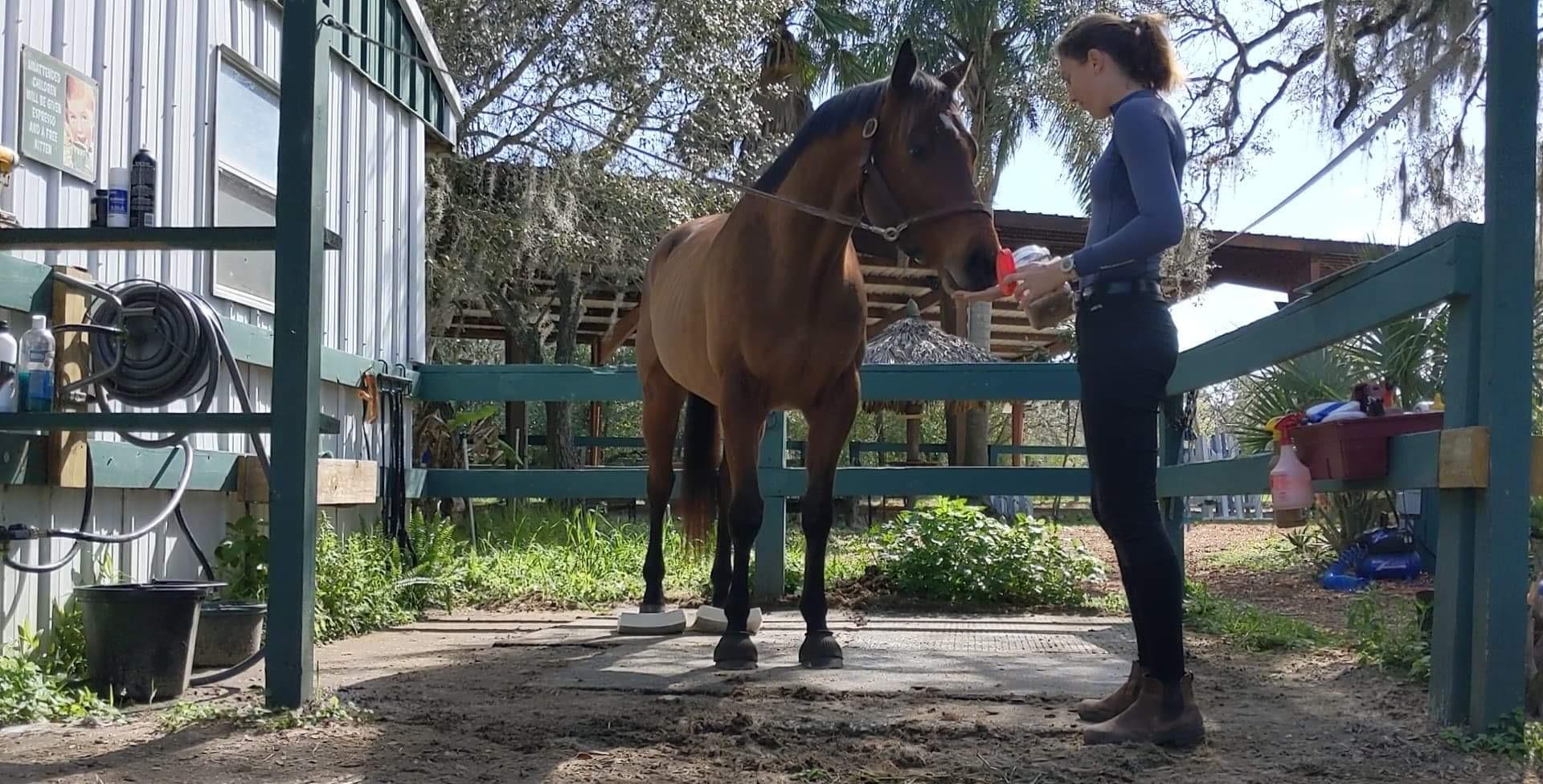 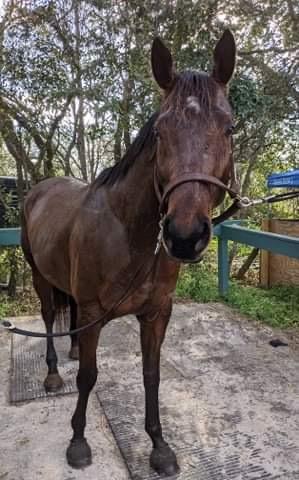 Spider getting a bath. Photo by Camille Byrd.

Overall, he had been very well behaved. He had an incredibly awful skin funk that required lots of baths to begin to clear up, and he was confused as to why he was doing all this stuff but not really doing any work. But his rehab was progressing quite well, and he loves Camille and her horse Teddy is his best buddy, so he was pretty content.

Last week, due to some unexpected changes, he needed to come home. So, we brought him home on Tuesday, I turned him out alone in my dressage field and asked him to please not hurt himself. He made it less than 24 hours before he broke the hotwire and lost a front shoe. As an aside, he and I are a good pair, apparently, because while repairing the fence, in the dark, holding a flashlight under my chin, I managed to get the wire wedged in my pants. I was stuck there for a while before I managed to extricate the wire from the fabric of my jeans. I was determined NOT to have to call my husband for rescue on that one! 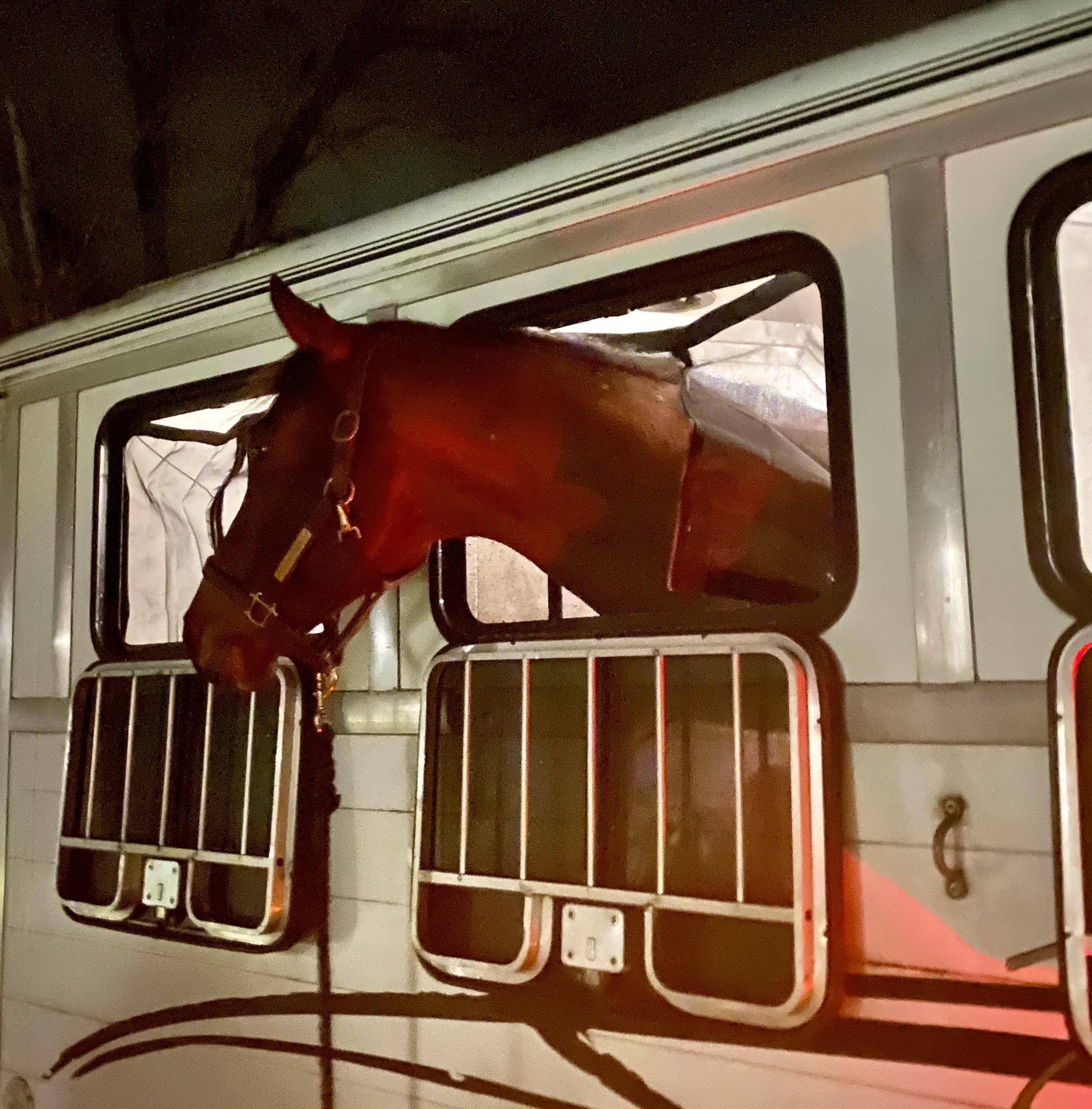 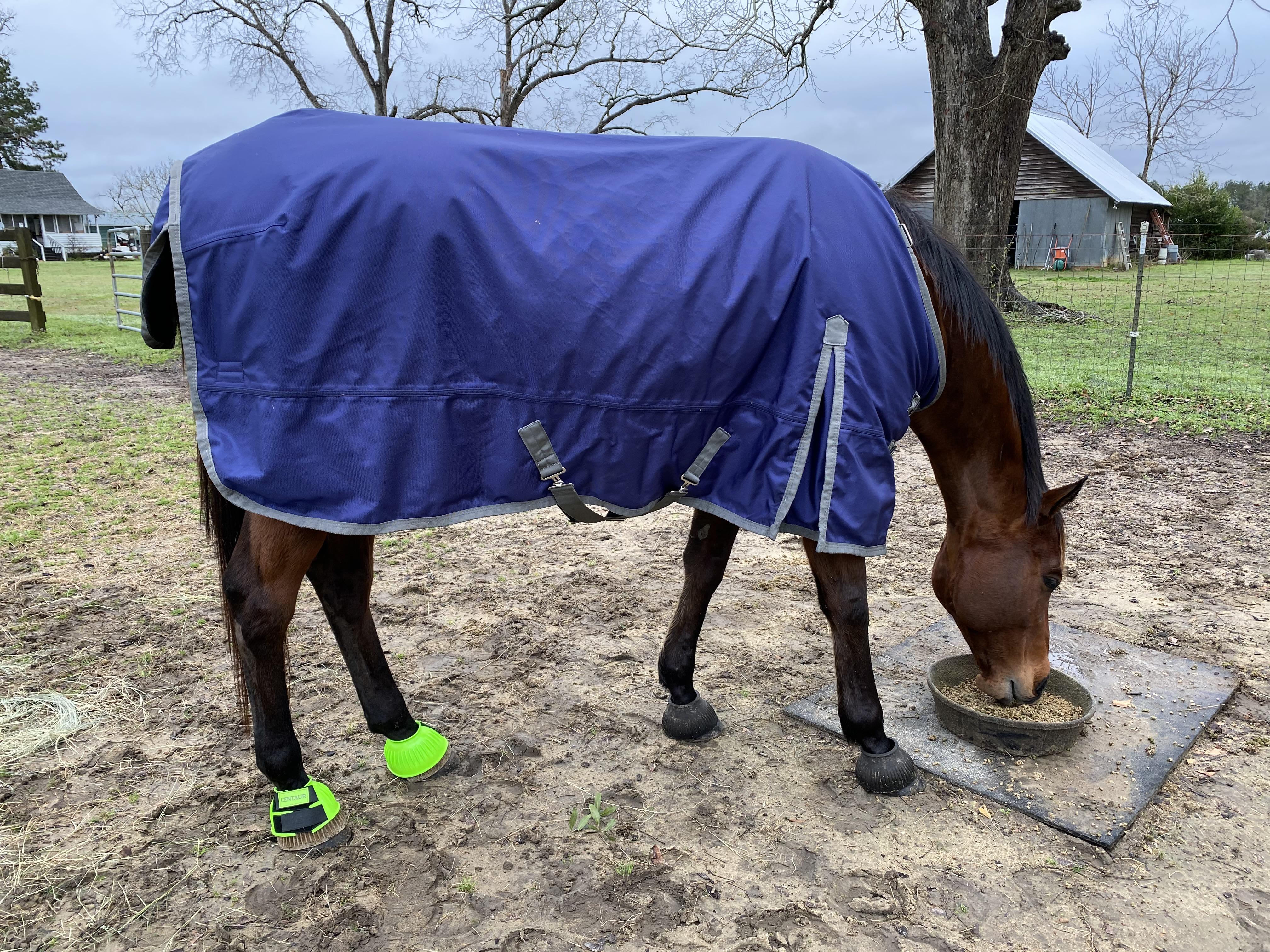 Spider in his field, wondering where room service went and why he is wearing these stupid neon bell boots. Photo by Libby Henderson.

Spider thinks he has been demoted back to the sticks, and misses his buddy and his nice room with snacks. But, on the other hand, playing in the mud and flipping the hay feeder over is fun, so there’s that. Being alone has led to more mischief, as he was so horrid for his farrier yesterday, he has on his therapeutic back shoes, but no front shoes, because it was too nice a day for either the farrier, the horse, or me to die. I turned him out with the two grumpy old retirees, figuring that some socialization and horse discipline might help his disposition until I can get back to doing his rehab program.

But that, for now, has to wait. Because it is Red Hills week! The second week in March is probably the busiest I am all year. Red Hills Horse Trials (RHHT) is held that week in Tallahassee, and I have been a volunteer with the organization for more than 20 years. RHHT is an event held once a year in conjunction with a unique partnership with the City of Tallahassee. We basically build a small equine facility in a city park in a space of about two weeks, and it is a monumental undertaking. 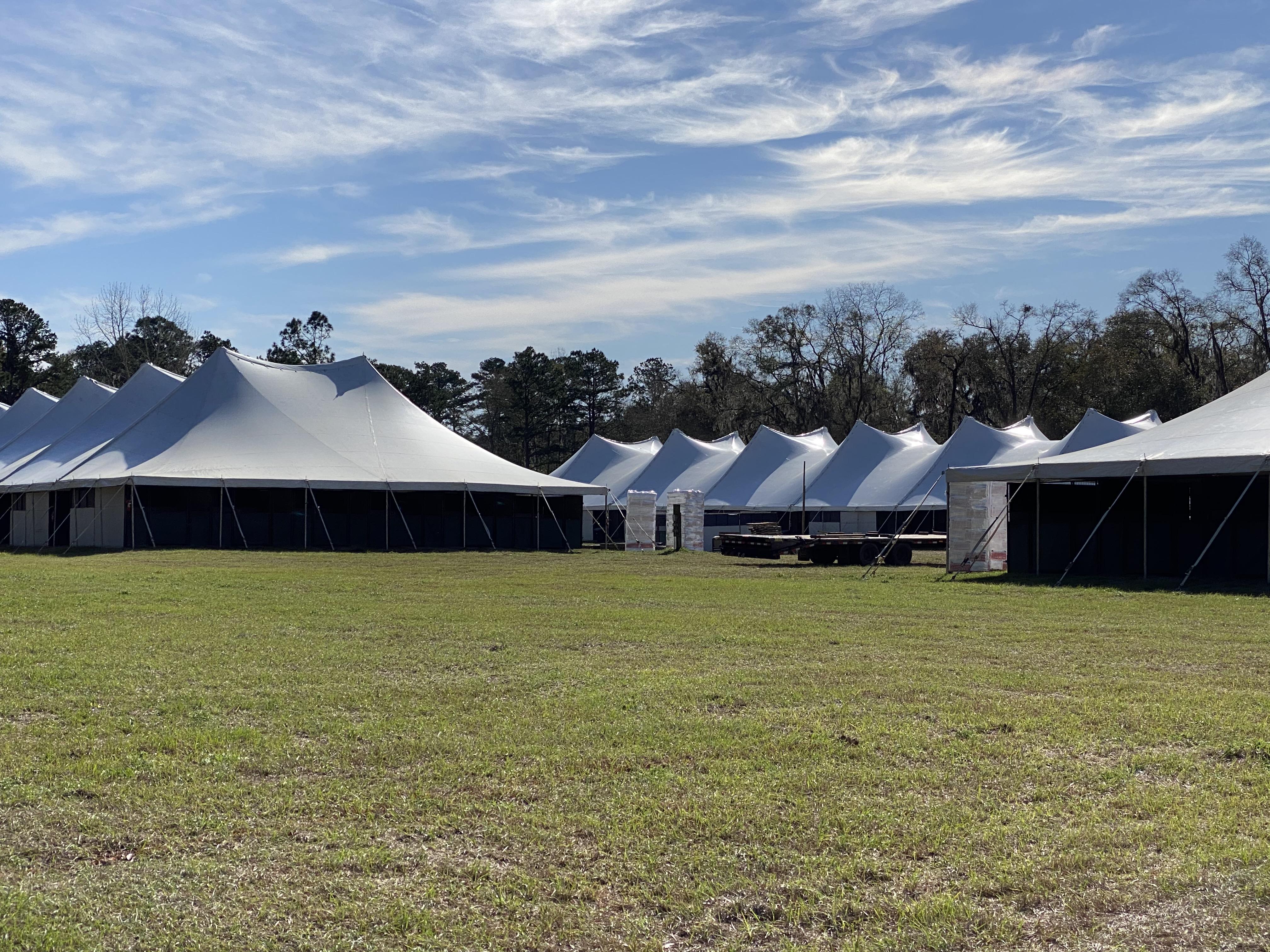 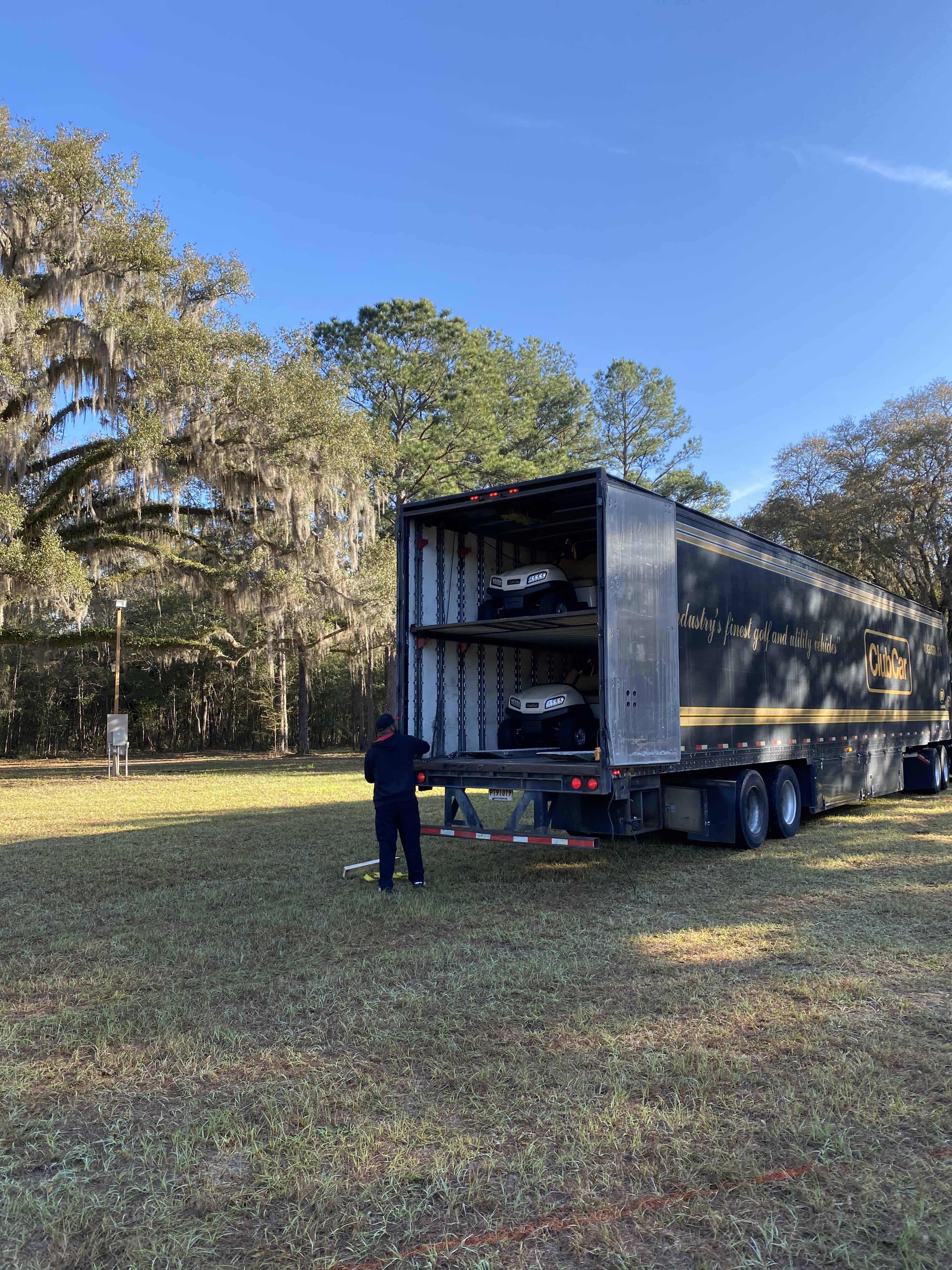 Currently I’m co-chair of the Operations Support Committee. It does exactly what you’d think — we support the entire operation. We frequently call ourselves the go-fer committee, because whatever anyone needs, we go and get it! We cover everything from the golf cart rental and assignment to helping to place the RVs used for offices to making signs for posting around to running to Home Depot.

A couple of years ago, I also got conned somehow into being the co-coordinator of all of the Volunteers. I now know more about Excel spreadsheets than a non-project manager should, and have been working on my people skills. While I would never have chosen this as a job, because it is way too peopley, I have enjoyed it — most of the time! 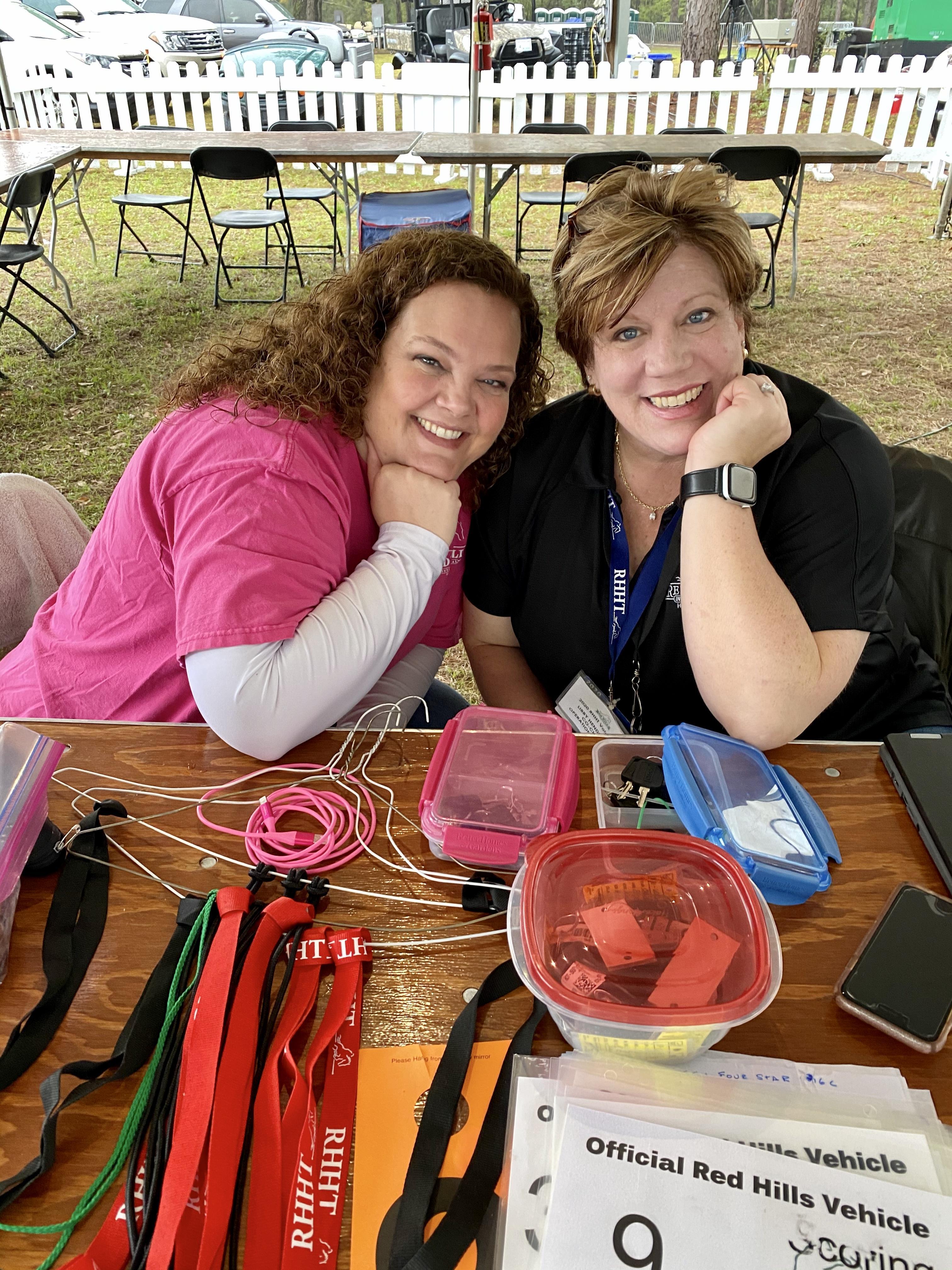 Co-chair of Operations Support (and person responsible for me doing volunteers), Andrea Tunnicliff, and me at Red Hills. Photo by Shems Hamilton Photography. 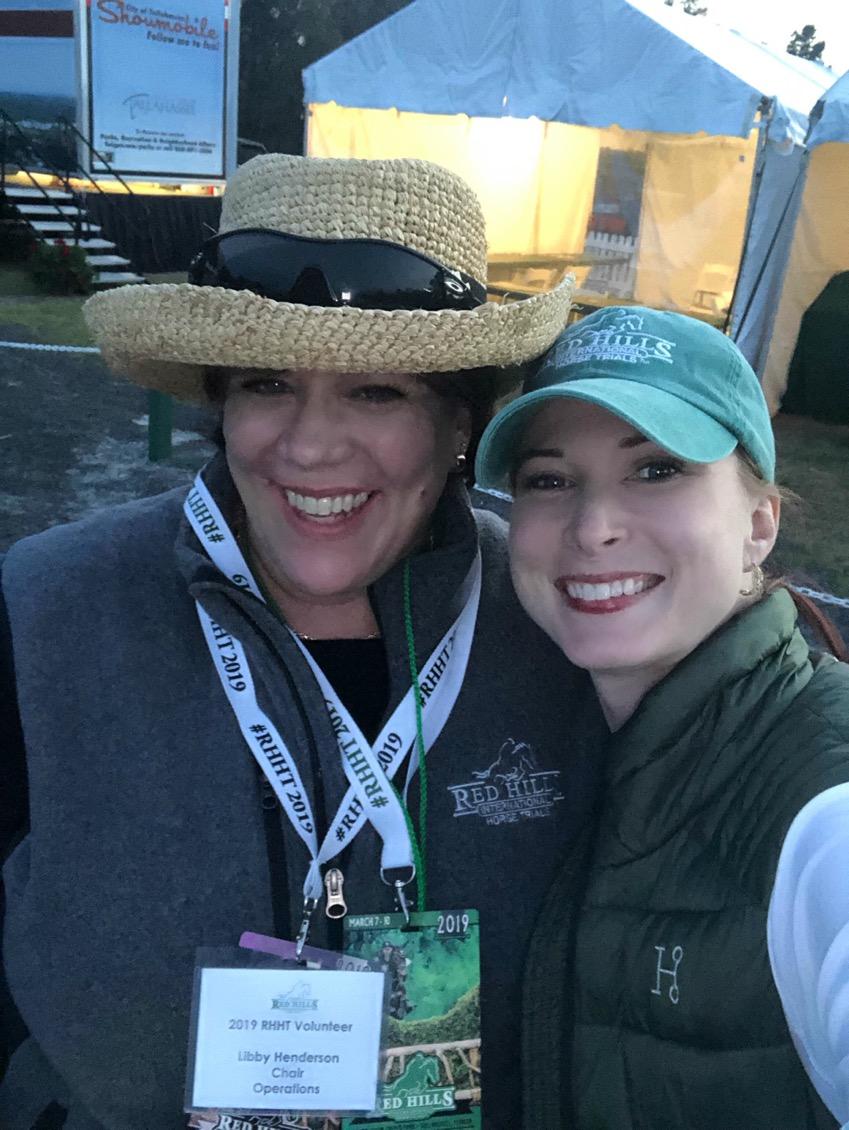 Kristina Littlejohn, who has helped me so much with Spider and me at Red Hills. Photo by Libby Henderson.

This year has been especially challenging, as we are operating without spectators due to the COVID-19 concerns. Our event is second only to the Land Rover Kentucky Three-Day Event in number of spectators that we typically have. Our number is around 22,000 people that come to see the event. This year, we are running without the spectators, without the income from the gate and with the added requirement that we must physically check every volunteer to ensure that no one has a fever and that everyone has signed two releases. Setting up the infrastructure to monitor 500-600 volunteers is always tough. We are going to have closer to 300 this year, and just coming up with a way to track all those people is enough to make someone crazy!

In addition, we didn’t get the all clear to run the event this year until six weeks ago. We begin to plan the next year’s event on the Monday after the last horse has left the park, but over this last year, planning was impossible because we did not know if we could hold the event. So we are packing six solid months of work into six weeks this year!

Those of us who have been doing this for a while feel it is worth it, though. We have built a family wherein we’ve seen volunteers’ kids grow up, get married, and have children of their own. We’ve had one marriage between volunteers that met while working at Red Hills, and we’ve built long-lasting relationships with friends that have become family. Some days, where you wake up at 5am to input data into spreadsheets, feed your own horses and dogs, go to your full time job, leave early to meet the farrier, rush off to another volunteer meeting you can’t miss, and the come home to work on volunteer spreadsheets until after midnight — those days are tough. 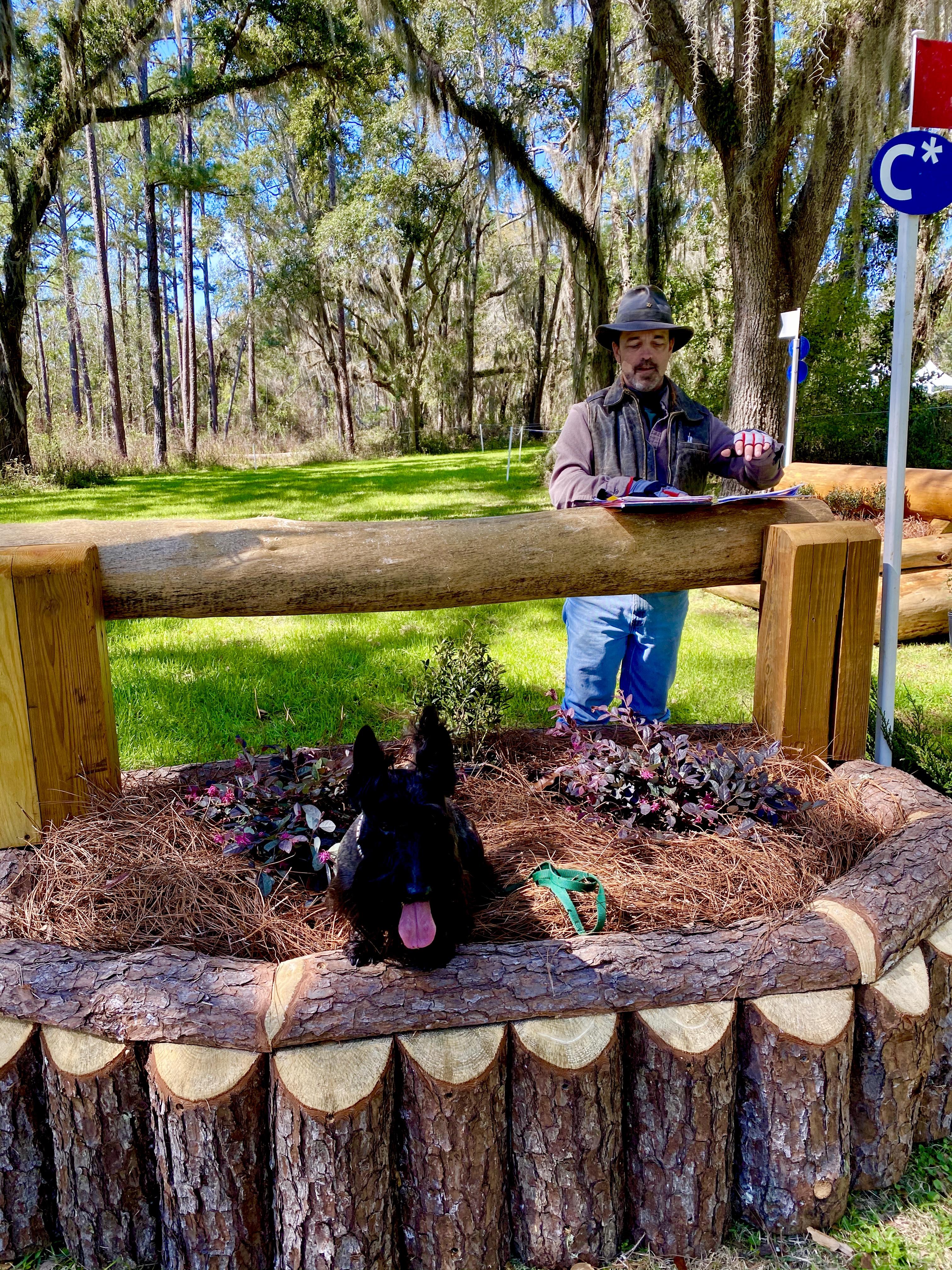 Cross Country Jump Judge co-chair Mark Daugherty and Magnus, my Scottie, who is the official “Mas-Scottie” of RHHT. Photo by Libby Henderson. 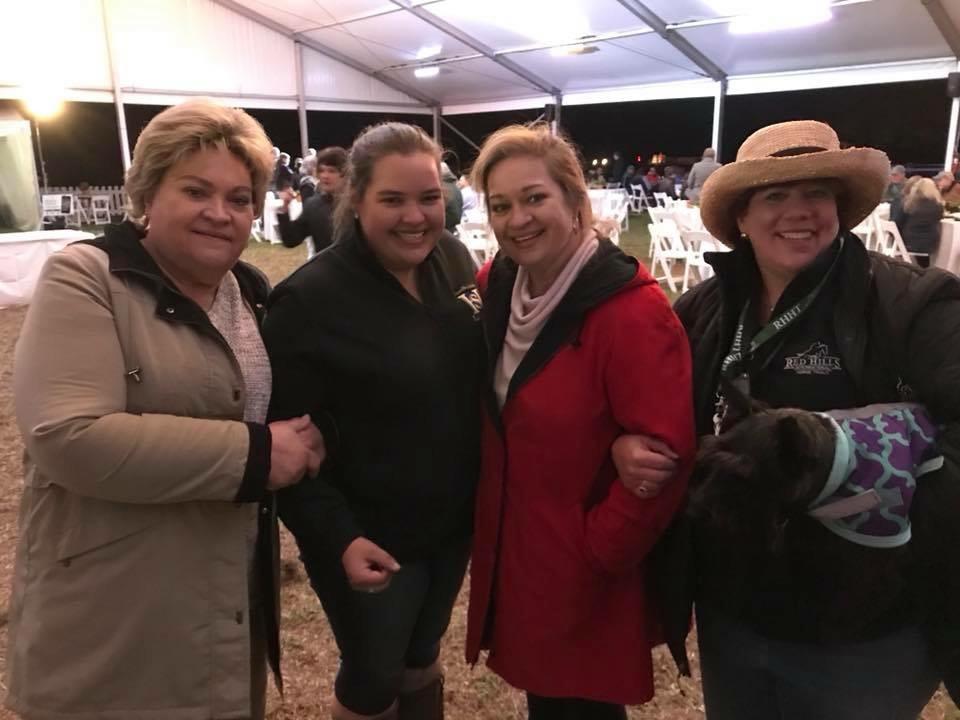 The Retired Racehorse Project’s Thoroughbred Makeover is a big show that is put together with the assistance of a lot of volunteers. It will run, more than likely, while still under COVID-19 precautions (fingers crossed that a lot of us are vaccinated by that point!). Keeping all the details corralled and managing so many horses at the Mega-Makeover will be hard and require extra volunteers. If you can help out in October for that show, please volunteer. For that matter, please consider volunteering for any horse show that you appreciate and want to see continue. And be kind to your horse show volunteers. If any of the horse sports had to pay everyone involved, we would all get priced out of competing. In the words of a friend of mine “Kindness is free, give it to everyone” — that is a good motto always, but especially to embattled horse show volunteers who have given up on sleep, so that you can have a wonderful time showing your horses! Next month I’ll have a report on Spider’s return to the University of Florida for his re-check and an idea of whether we can continue to get ready for the Mega-Makeover in October! 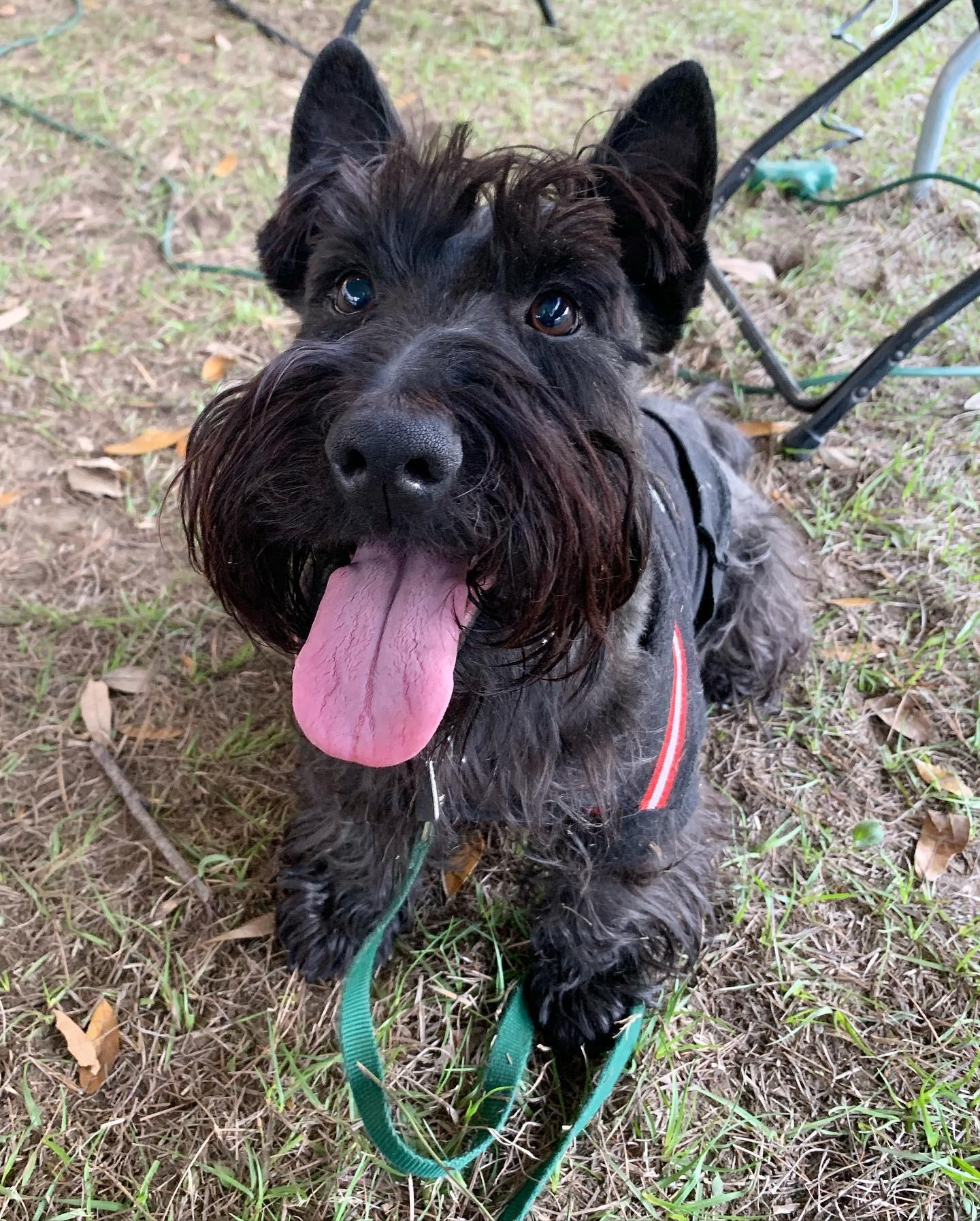 A close up of the Official RHHT Mas-Scottie, Magnus, doing his job of welcoming volunteers to the show! Photo courtesy of Libby Henderson.