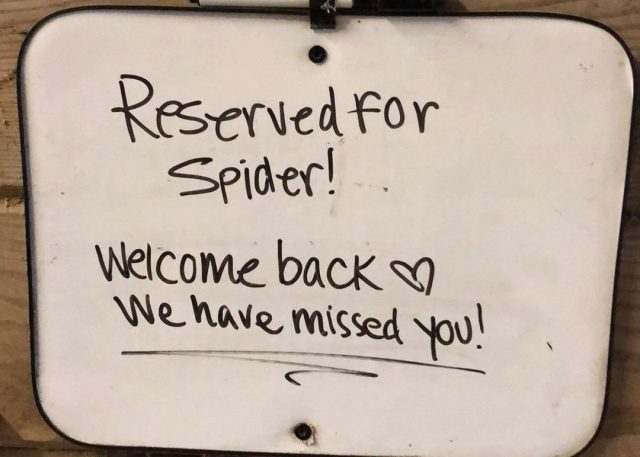 “It seems cliché to say so, but I’m reminded again and again that we must not give up hope, even when, or perhaps especially when things get the most tough.”

Following the announcement that the Retired Racehorse Project‘s 2020 Thoroughbred Makeover and National Symposium, presented by Thoroughbred Charities of America, will be postponed to 2021, competitors have been working to decide what comes next for them and their mounts. Today, blogger Libby Henderson discusses tackling Spider’s latest soundness issue.

“You don’t throw away a whole life just ’cause he’s banged up a little.” ~ Tom Smith

This line is from the movie Seabiscuit, and it is said by the legendary horse’s trainer. I’ve loved this idea for a long time, and did a lot of searching through my Kindle copy of the book to find it, only to realize that it isn’t in the book, only in the movie.

I said it to myself often when Spider (JC Gossamer) came to me originally because here was a beautiful racehorse, but with a hole in his tendon, and he definitely qualified as “banged up a little.” He needed a soft place to land and some tincture of time, to get better. I felt pretty good about having given him that, and made my arm sore patting myself on the back for his well healed leg (which, let’s face it, was mostly nature doing what nature does, and had little to do with me at all). Apparently I needed a reminder of how much value a horse has when it is even a little more banged up, and this month Spider was glad to deliver that reminder.

In my last post, I excitedly told you about Spider’s training plan, and what a wonderful job my friend Camille was doing with him. The slow and steady work made tremendous improvements in his strength. The highlight of every day during January for me was getting the link to the day’s video, so I could watch him learn and improve. (Side note, and this is not an ad, as there is no sponsorship here — the Pivo device that tracks and records a rider and horse is awesome! Being able to see his work every day was fantastic!)

Spider’s walk, trot, and canter were all improving, and he was successful at trotting poles and cross rails. On his first day schooling verticals, he seemed to have some issues pushing off strongly, but he was willing and seemed to be having fun. After Camille walked him around a bit and then picked the trot back up, he was really short on his right hind. She called me as soon as she put him up, and that phone call started with the terrifying statement, “I don’t want you to panic.” Poor Camille — I did, of course, start to panic!

We spent the weekend brainstorming about how to get him thoroughly checked out. He remained unsound, and had swelling below his hock and lower, around his fetlock. By the time I contacted the University of Florida’s Large Animal Hospital on Monday morning to schedule an examination, I had moved through maybe not all the stages of grief, but close.

My favorite lameness expert/surgeon at the University of Florida, Dr. Ali Morton wasn’t on clinics, but was able to help me get Spider in for an ultrasound with their imagining expert, and we were able to schedule him to stay for a couple of days. The ultrasound showed desmitis in both hind suspensories, and potentially some damage and remodeling in the right hind fetlock. The findings were not definitive enough to be certain that we had found the answer. We moved on to nuclear scintigraphy for a full body scan to see what other gremlins were hiding under his hood. 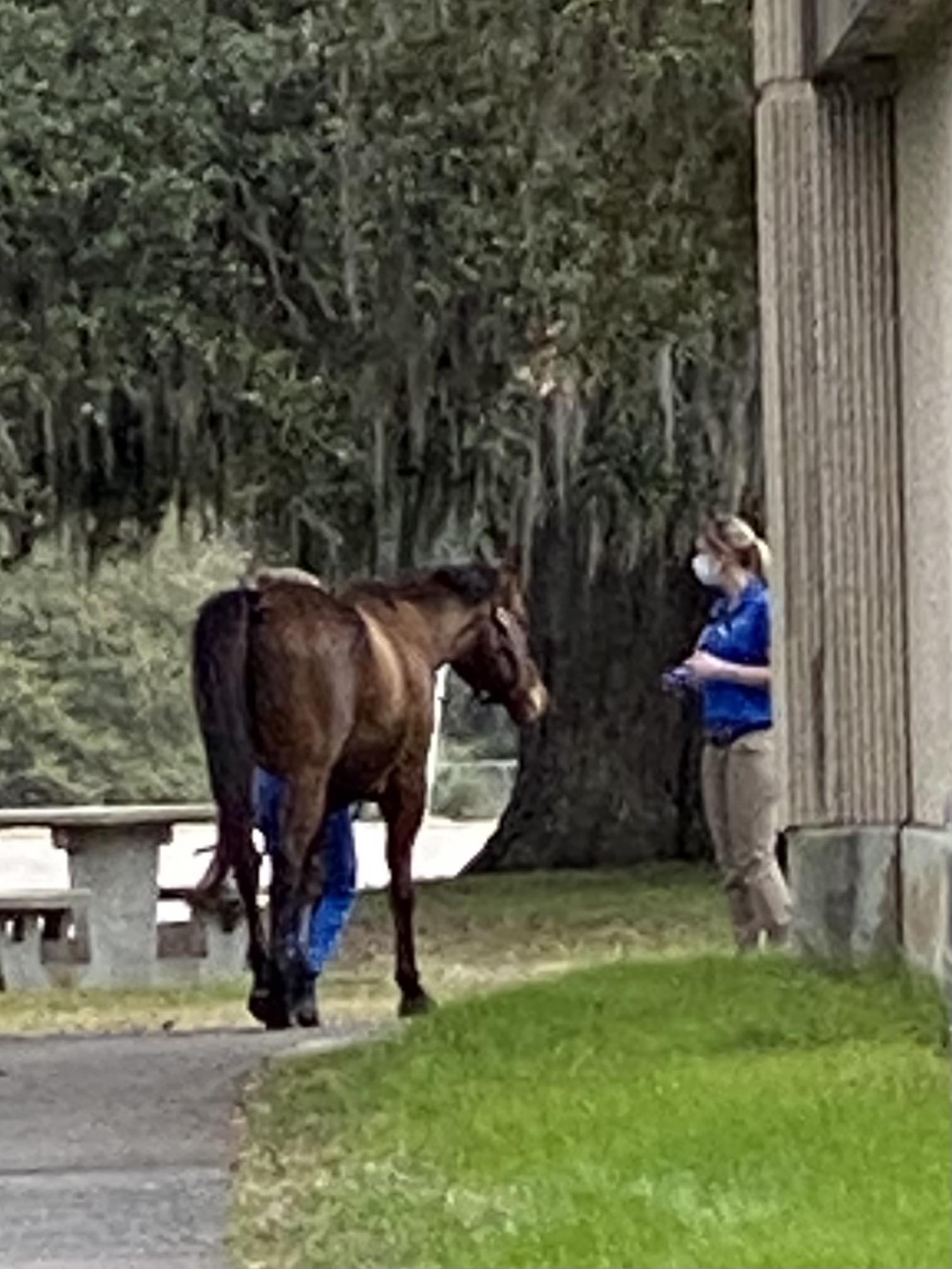 Spider going with the vet techs to his stall at the vet school. Due to COVID restrictions, owners can’t stay. I was sad as he walked away, but he didn’t miss me at all! Photo by Libby Henderson.

I’ve never had a “nuke scan” done on any of my horses before, and the results were a little weird and fascinating. He did show some uptake in his lower neck and part of his spine. He is negative for any clinical signs of pain and discomfort in those areas, so we are not taking any actions in treating that at this point. The expected bone involvement with the high hind suspensories did not look as obvious as anticipated, so some additional diagnostics were scheduled for the next day, as soon as he was determined to be safe and not terribly radioactive. His hind fetlock radiographs and block, however, also did not produce a crystal-clear answer as to where the majority of his lameness was coming from.

Sometimes you do a lot of tests, and still end up with “well, this is definitely at least part of the problem!” answers. The diagnostics were helpful in that they ruled out some possibilities, and highlighted some issues where we weren’t looking.

Interestingly, the scan showed that his growth plates were still active, which in a six-year-old Thoroughbred is considered fairly unusual. I have been thinking he wasn’t done growing, and I was right. 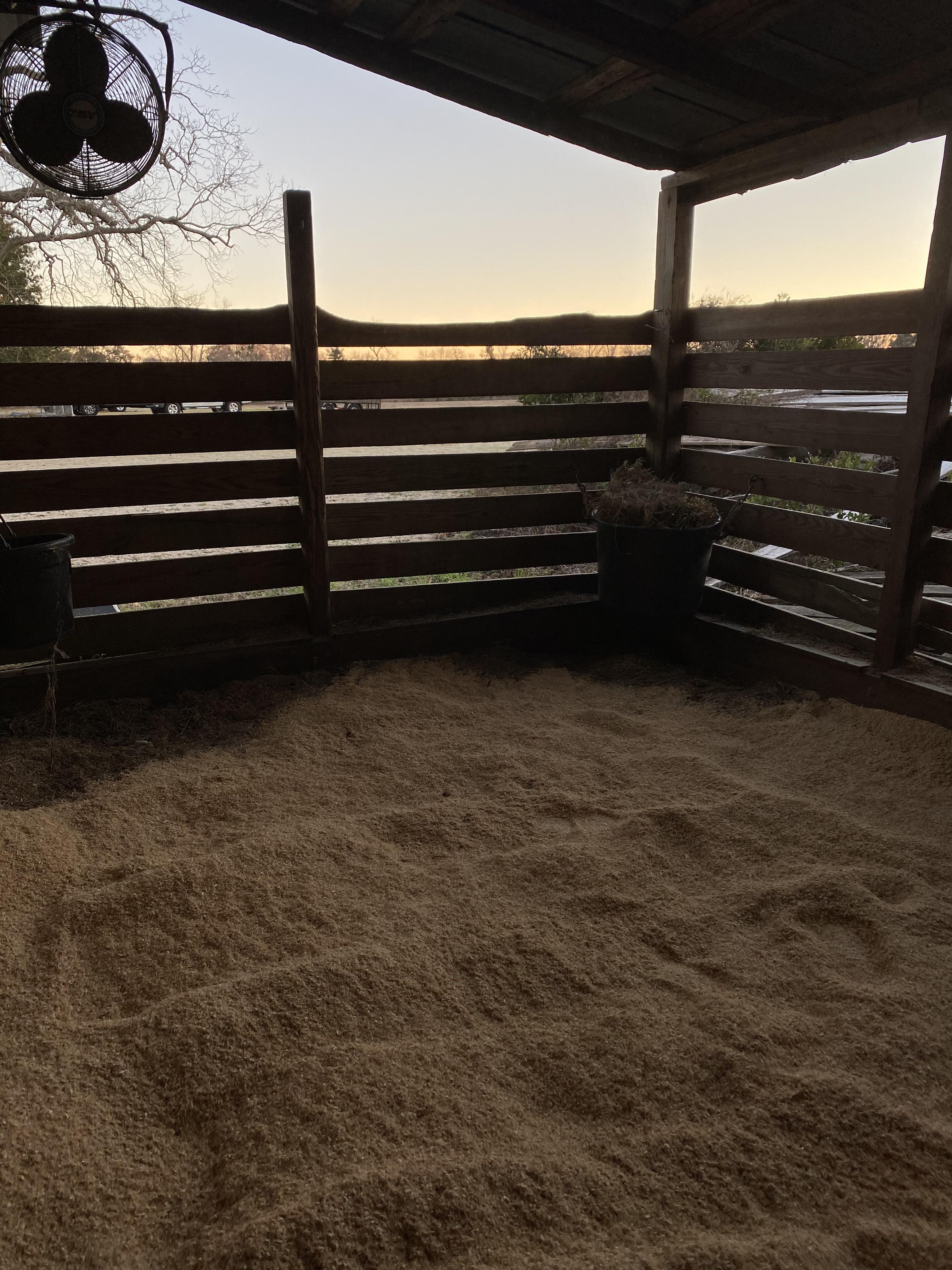 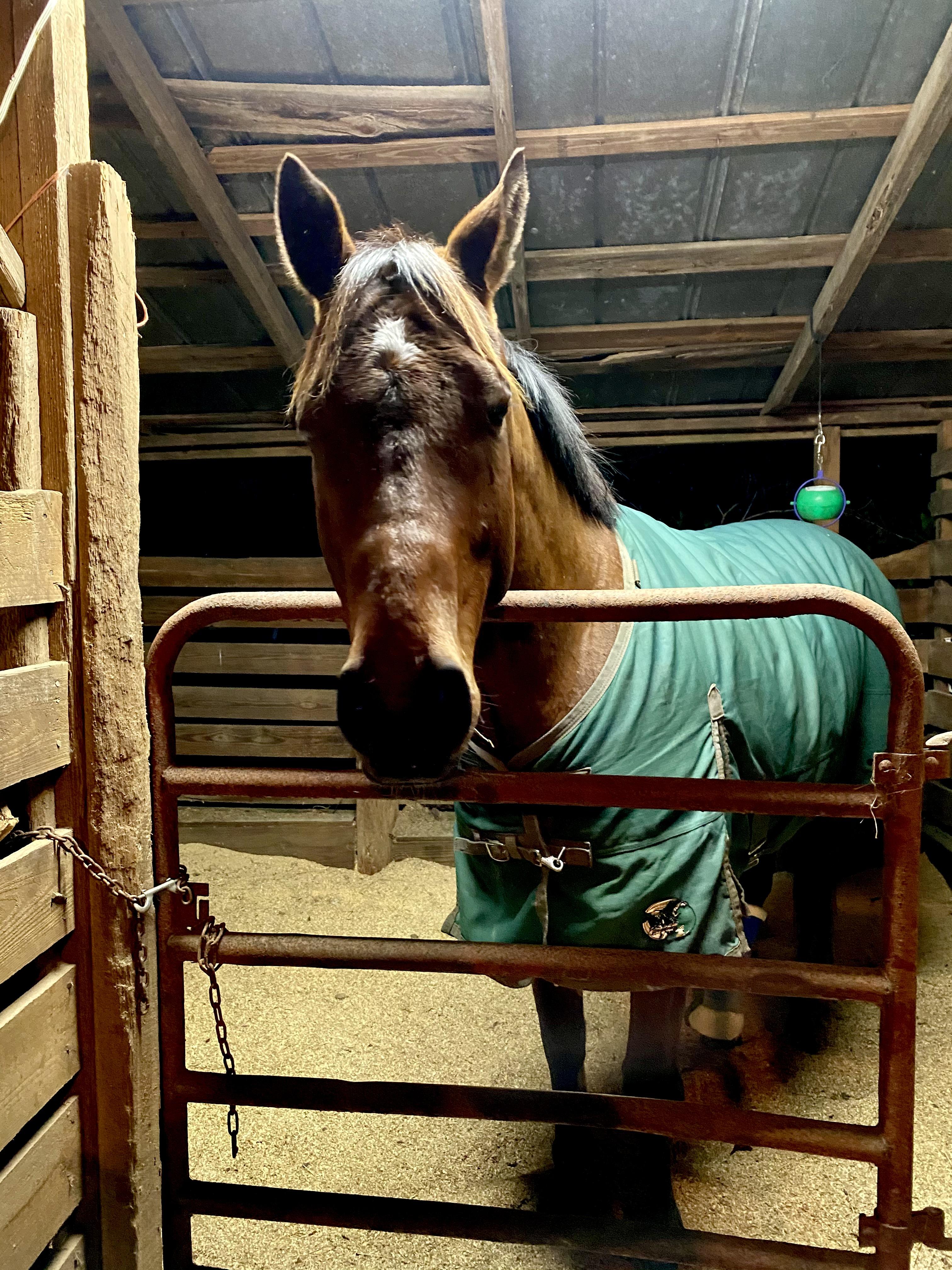 Spider in his stall at home. Photo by Libby Henderson.

So, where does that leave us? Right back where we were, with our slow and steady path having slowed to a crawl. He has an impressive new set of shoes, and is wearing back shoes again, as well as two sets of bell boots, front and back. Spider has a neat method for removing his back shoes, and is so talented, he can remove them in his sleep! Our farrier watched him carefully and realized that he rests one hind foot or the other and dozes off. He then wakes suddenly and steps on the inside of the hind shoe as he stands up, and pops the shoe off. Last time he was in hind shoes, he pulled three of them within 10 days, so here is hoping a clever shoeing job and bell boots on his hind feet makes a difference! 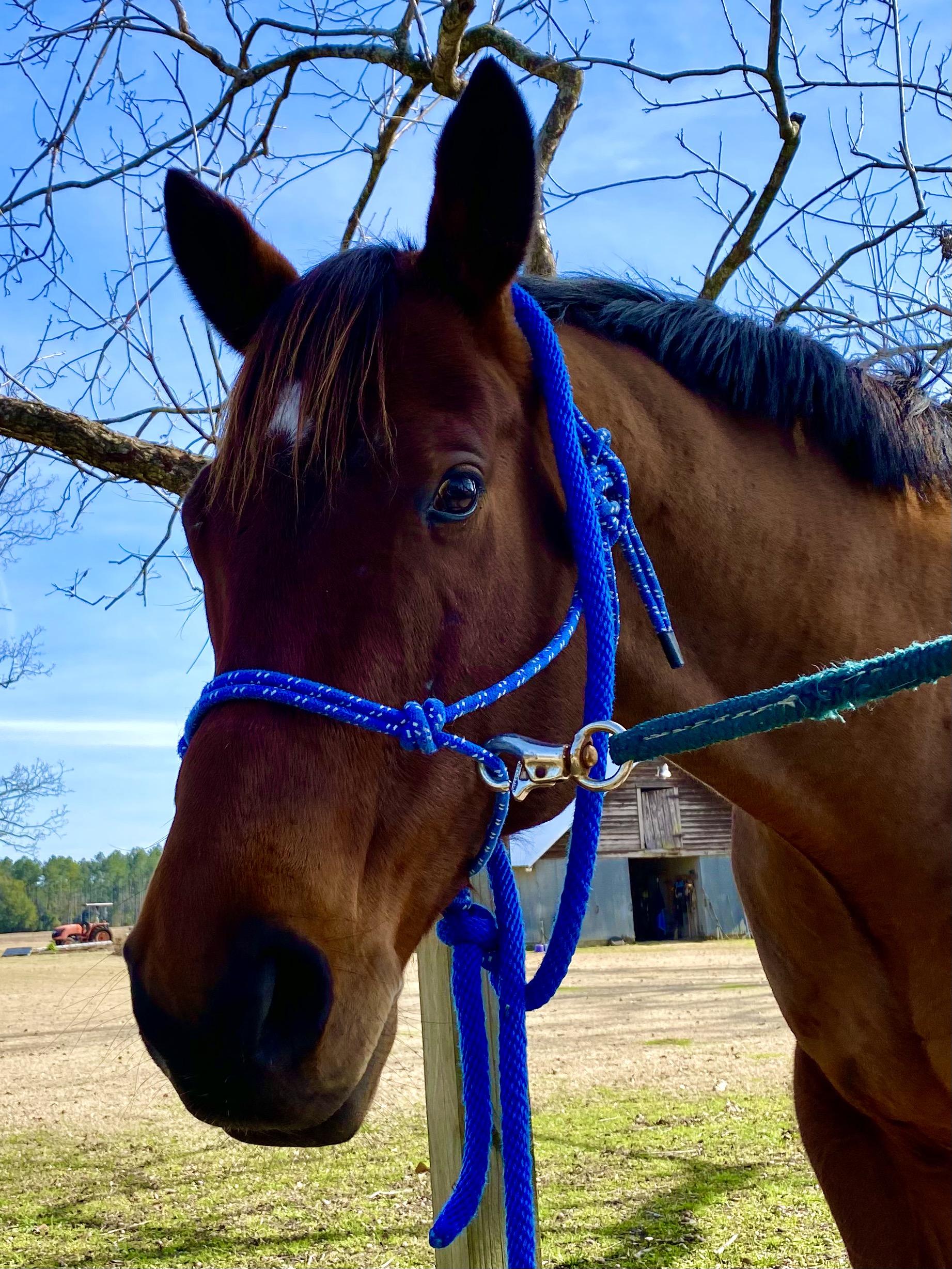 Spider waiting for the farrier to finish his new shoes. Photo by Libby Henderson.

We brought him home, and turned him out with my 30-year-old quarter horse, Bubba (which is his actual, registered name!). He and his emotional support cow pony spent a week hanging outside (and running in the muddy pasture, which was NOT on the list of recommended activities in the vet school discharge!) because he was so anxious confined to the stall. Watching him perform pirouettes in his stall, and then in the round pen on slick ground, was more than my blood pressure could take, so out he went. 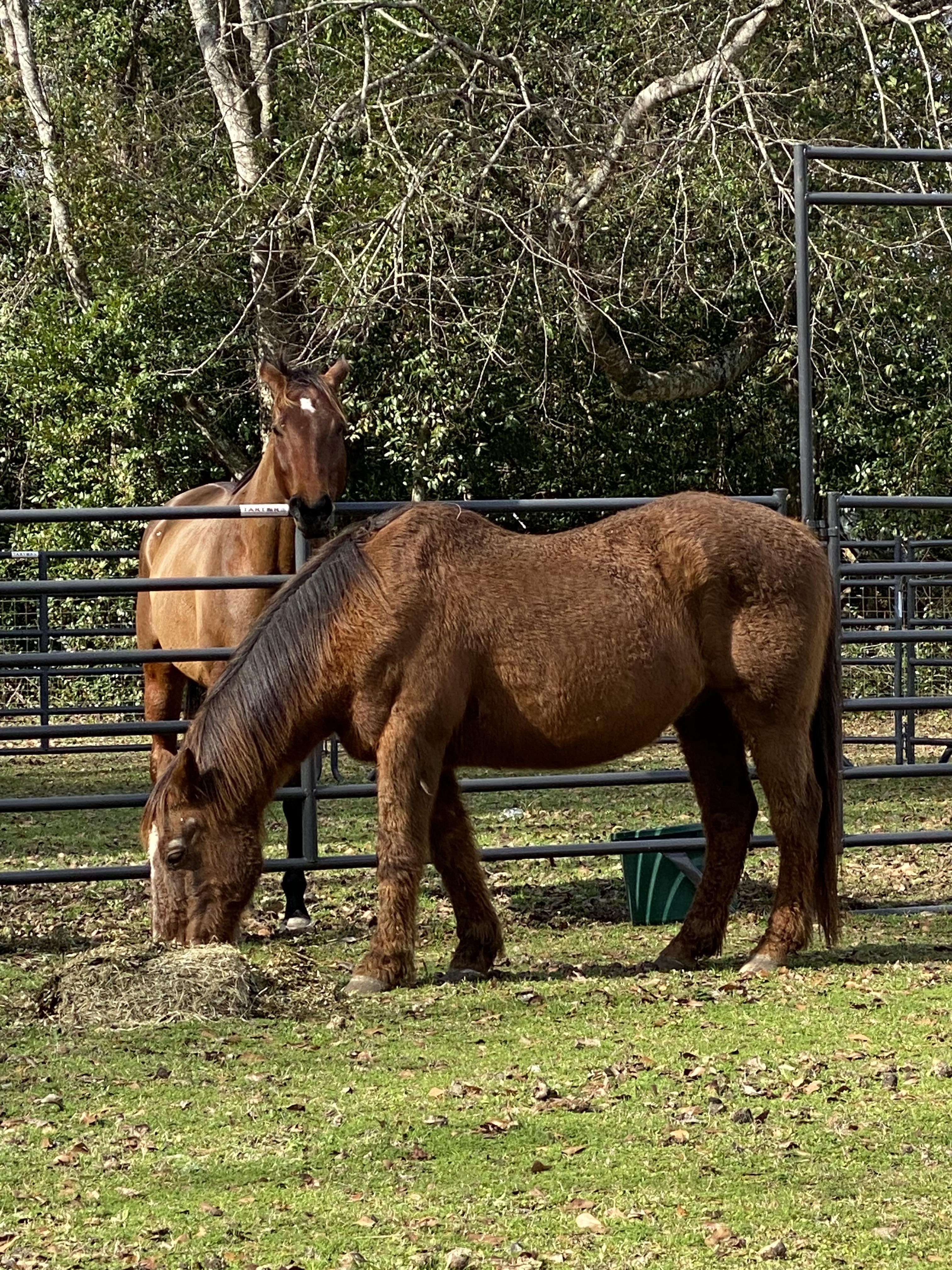 Spider in the round pen with Bubba. Photo by Libby Henderson. 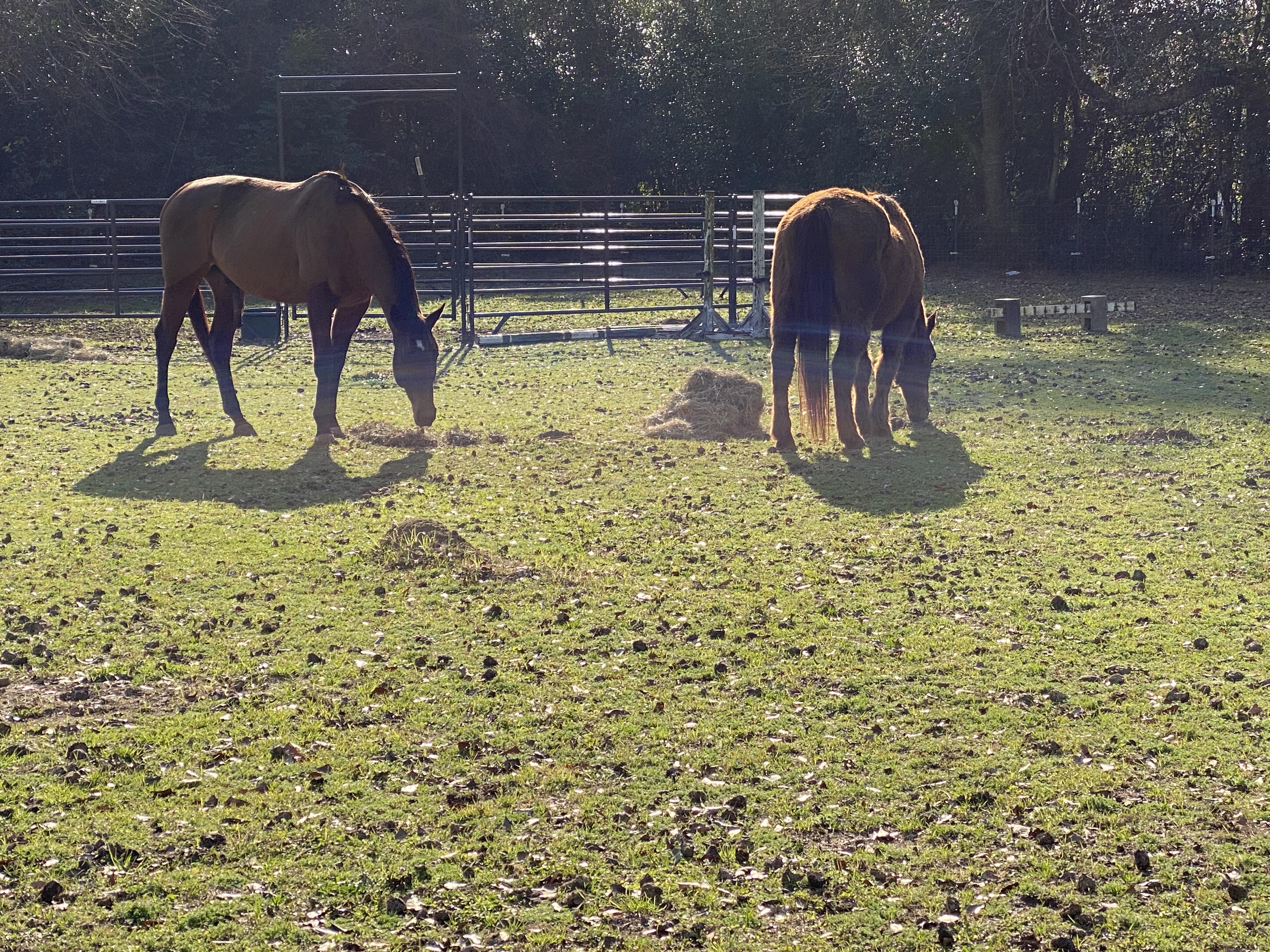 Mom gives up, and Spider and Bubba are out together. Photo by Libby Henderson.

Saturday, he went back to stay with his Aunt Camille. She is an angel, and has agreed to do his extensive rehab plan. He has a schedule of walking, stretching, working with the equiband, and time spent on the balance blocks for the next eight weeks. I mentioned she was an angel, right?! We will then return to the vet school for a re-ultrasound and see whether there is improvement and he can continue working towards the Makeover. Or whether we have to make some tough decisions about whether we can reasonably do dressage at the Makeover.

Whatever happens, he stays with me, though I really don’t want to have to retire him as a six-year-old. But, I’m not giving up hope. While we have been doing lameness detective work over the last two weeks, I’ve also lost my heart horse suddenly, and then lost a good friend to cancer. It seems cliché to say so, but I’m reminded again and again that we must not give up hope, even when, or perhaps especially when things get the most tough. Hug your horses and tell your friends you love them and count every day spent with both as a blessing. 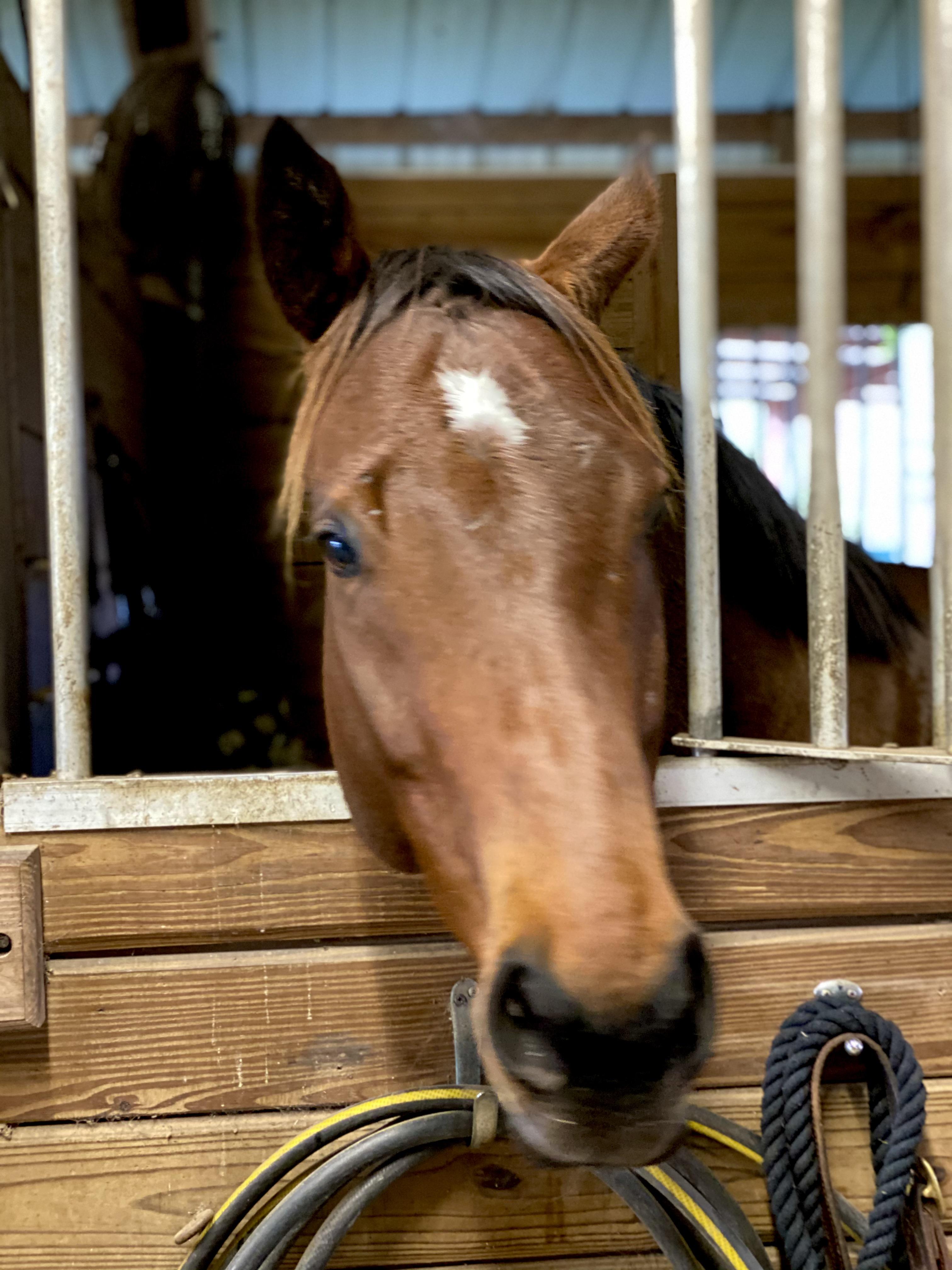 Spider in his stall at Lone Palm Stables. Photo by Libby Henderson. 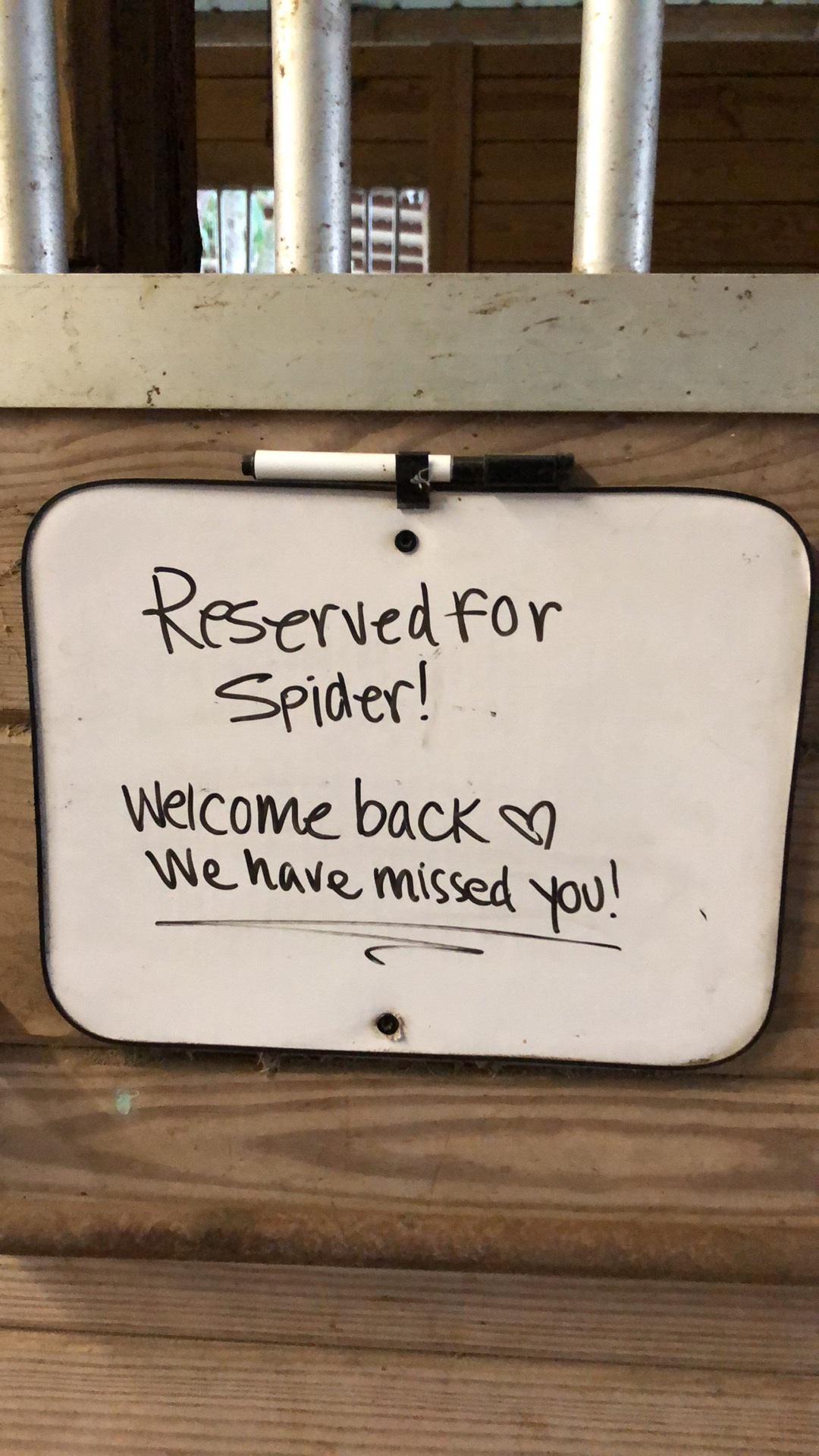