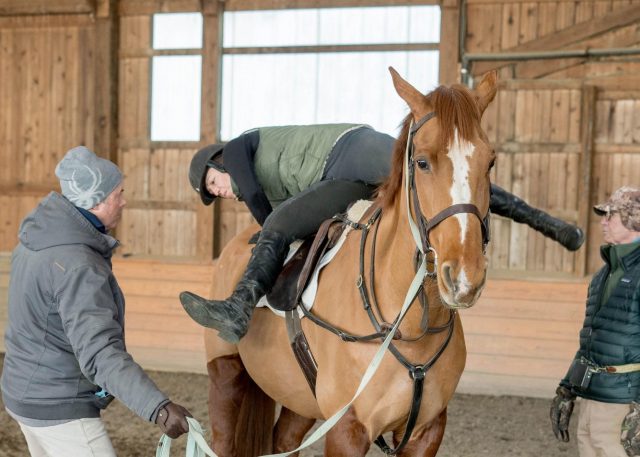 In this week’s Best of Jumper Nation, Amanda Cousins explains what “Hell Week” is and why anyone would agree to participate in it.

Generally when one is invited to something called “Hell Week,” the answer is no. Any sane person would say no to something with that name. I, however, have not claimed to be sane and I’ve certainly never passed up a new lesson opportunity with Olympian Jimmy Wofford. So, on January 18th, 2021 this hunter princess began six days of Hell Week.

What IS Hell Week you ask? It is six days of lunge lessons designed to improve the rider’s dressage (flat) position, taught by Jimmy. It’s been a regular part of Jimmy’s training program since its inception in the spring of 1973. You may be surprised to know that Jimmy did in fact come up with its name, and it’s doubtful that any participating rider has disagreed with the namesake. Hopefully you aren’t surprised to hear that many of our sport’s “forefathers” have been big fans of lunge lessons. Horsemen like Chamberlain, Jack LeGoff, Mike Plumb and even Bill Steinkraus used them. The cavalry was known for starting riders with no reins and stirrups. The exercises within Hell Week were not designed to be easy, but rather to be very helpful in developing independent aids, correct use of the spine and balance in the saddle.

Shall we set the scene? An even number of riders are needed, generally four but occasionally six riders participate. For old folks Hell Week, there was myself (of ACE Equestrian), Tom and Clare Mansmann (of Pacific Farms) and Courtney Olmstead (of LCO Eventing). I lovingly named our Hell Week, Old Folks Hell Week, because in general, all four of us are roughly 15-20 years OLDER than the usual riders who participate in Hell Week. We got to work in the indoor at Destinaire Farm all week which provided protection from the cold as well as soft footing for our old bones to smash onto should we take an unscheduled flight off our horse.

The week began on a Monday afternoon with a class room lecture. Jimmy covered the basics of the different positions we use and when we use them. He then gave a description of the exercises we’d be doing. The exercises were as follows:

Ready position– Outside hand holding the pommel to pull your pelvis deep and inside hand behind the back. By the end of the week, we were just touching the pommel instead of pulling ourselves in.

Ankle rolls– Exactly as it sounds. Draw big circles in opposing directions with your toes. Done at the walk.

Leg Stretches– Grab your right ankle with your right hand and pull the heel to your seat, stretching the knee downwards. This should happen without leaning or tipping of the body. Repeat with the other leg.

Splits– Place your arms crossed over your chest and move one leg straight and as far forward as possible, while the other goes back. The trick is completing this without tipping of the body and seat bones. Isolating just the leg movement. Done at the walk.

Puppet Master– Stretch your arms out, palms up, at shoulder height and move one leg at a time towards your hand (as if you were following a string up to your hand). This was another exercise to isolate leg movement. It really highlighted stiffness in the hip. Done at the walk.

Windmill– Starting with your arms at your sides, palms to the back, bring one arm forward and around. Your other arm rotates opposite of the first arm that moved. Imagine the hands of a clock. This exercise opens up the shoulders and is meant to be done in the rhythm of your horse’s gait. Done at the walk, trot, and canter. 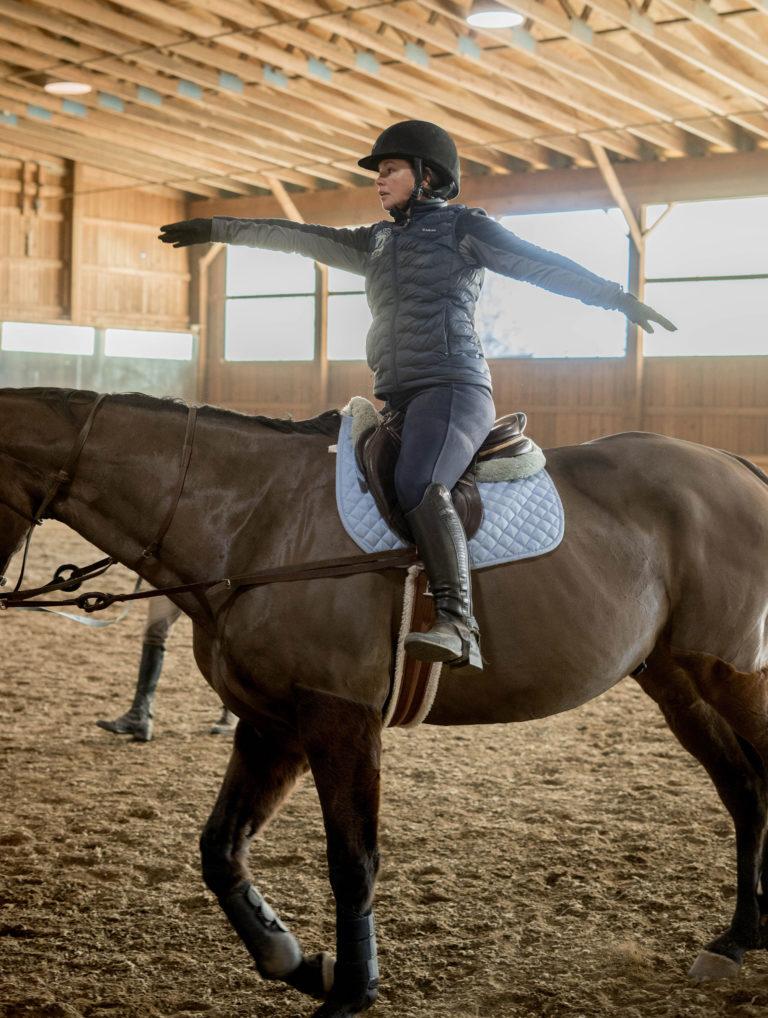 Body twisters– Arms outstretched shoulder height, palms up and rotate the body until you and your arms are parallel to the horses body. You should be able to look to the opposite hip. Then you twist back around the other way. Meant to isolate body movement. Done at the walk, trot, and canter. 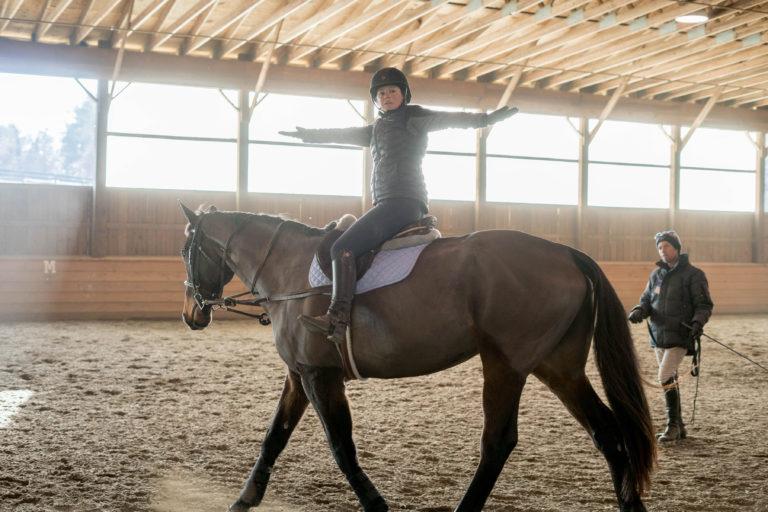 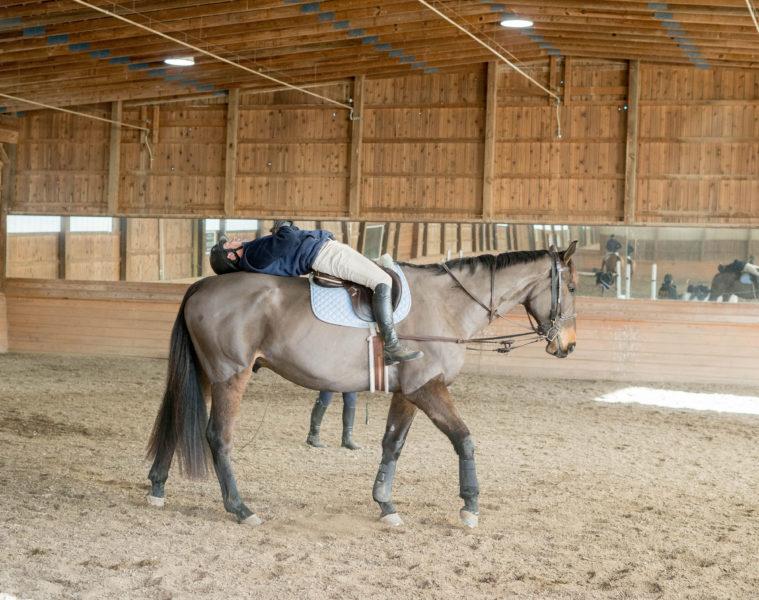 Side saddle– Without a side saddle. Inside hand holds the cantle and outside hand holds in the pommel, to be starting with legs on the outside of the circle. Switch your hand position when you switch your legs to the inside. Done at the walk and canter. 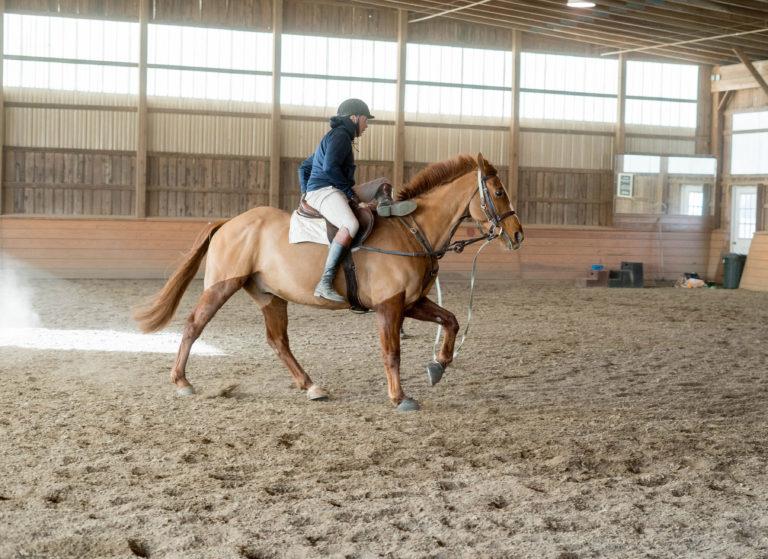 Jockey position– Pull yourself into a tight two point that mimics the position jockey’s do. 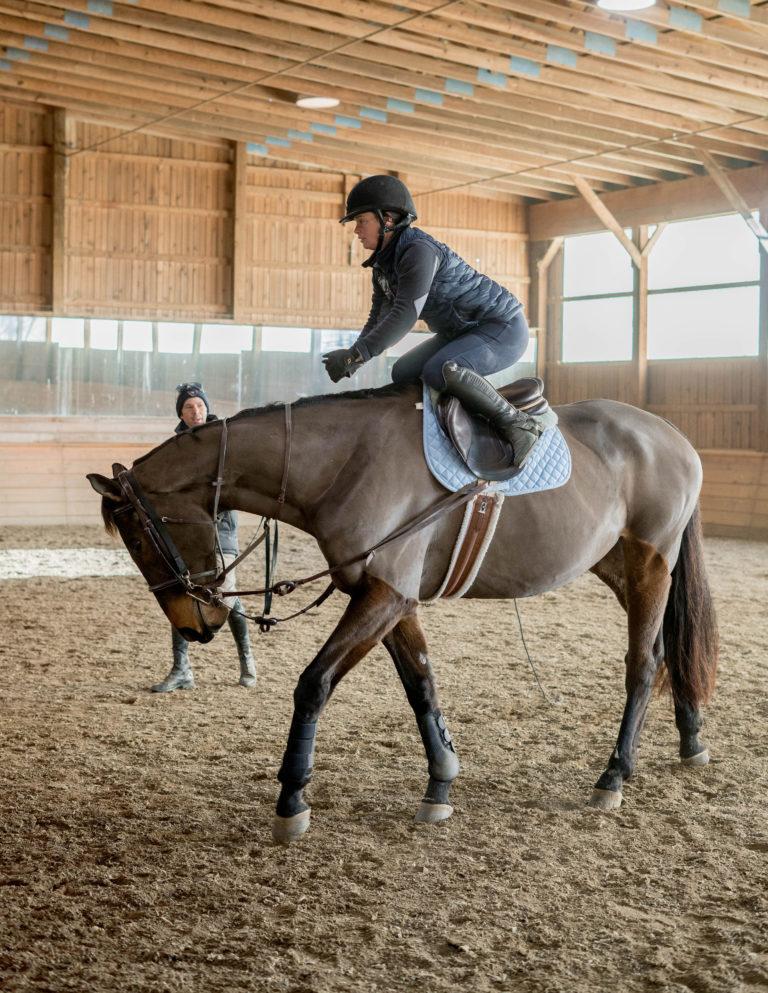 The next exercises were called the gymnastics portion. The horse is standing still for each of these. Safety was a common theme during the week and there were always two spotters for these exercises. I won’t go into spotter body placement, but I will say, kids don’t try this at home (unless you’re doing this with an educated Hell Week graduate).

Around the world– Bring both legs to the left side of the horse, lock your elbows and place the hands on the pommel and withers, rotate your body clockwise so you’re facing the horse balancing on your palms and then swing your right leg back over the horse. Repeat on the other side. 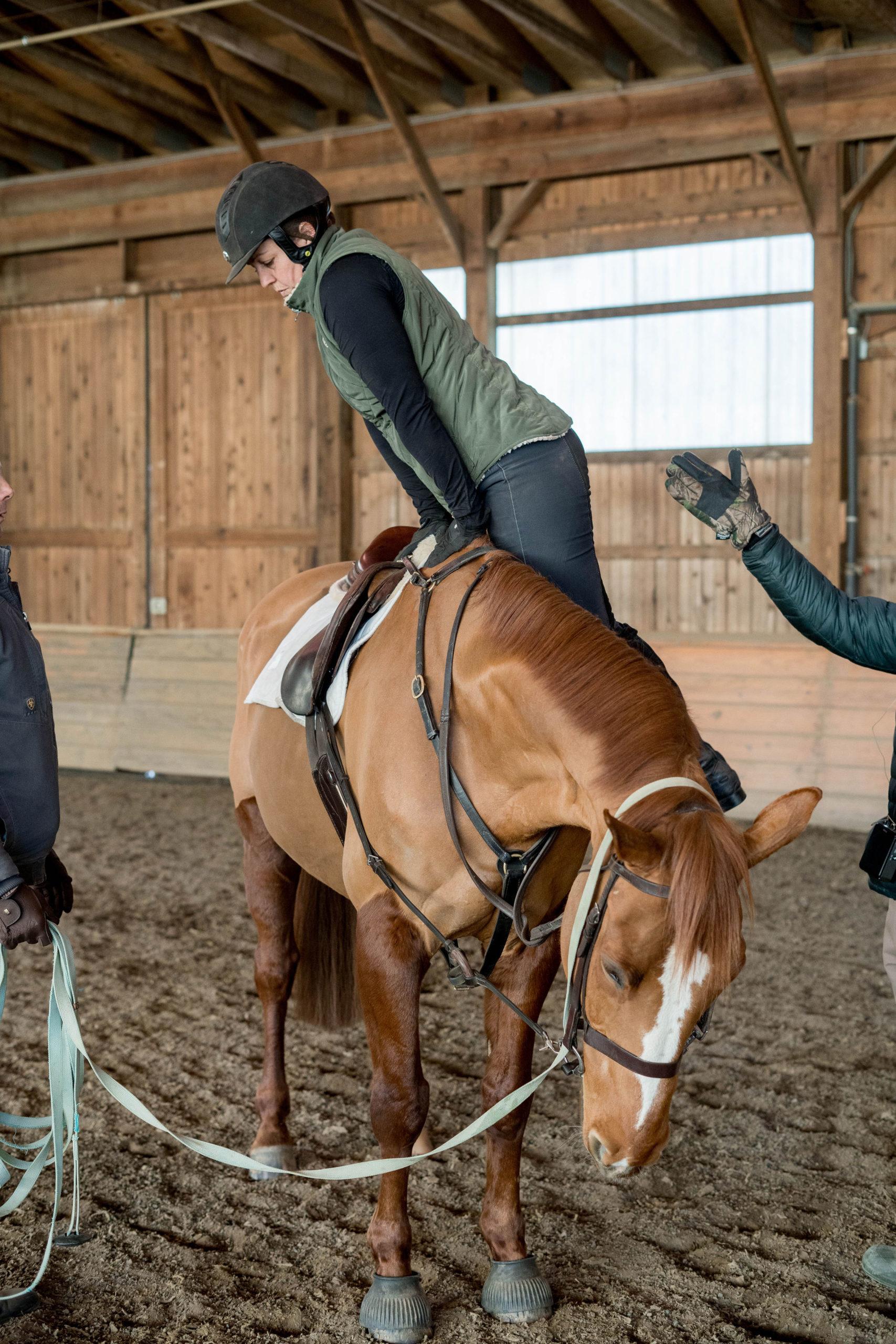 Heel clicks– Put your palms on the withers, lean forward while tucking your chin, swing your legs up and behind you and click your heels together.

Scissor kicks– Put your hands on the withers. Begin like for a heel click, but cross your legs to land back in the saddle facing the opposite direction. 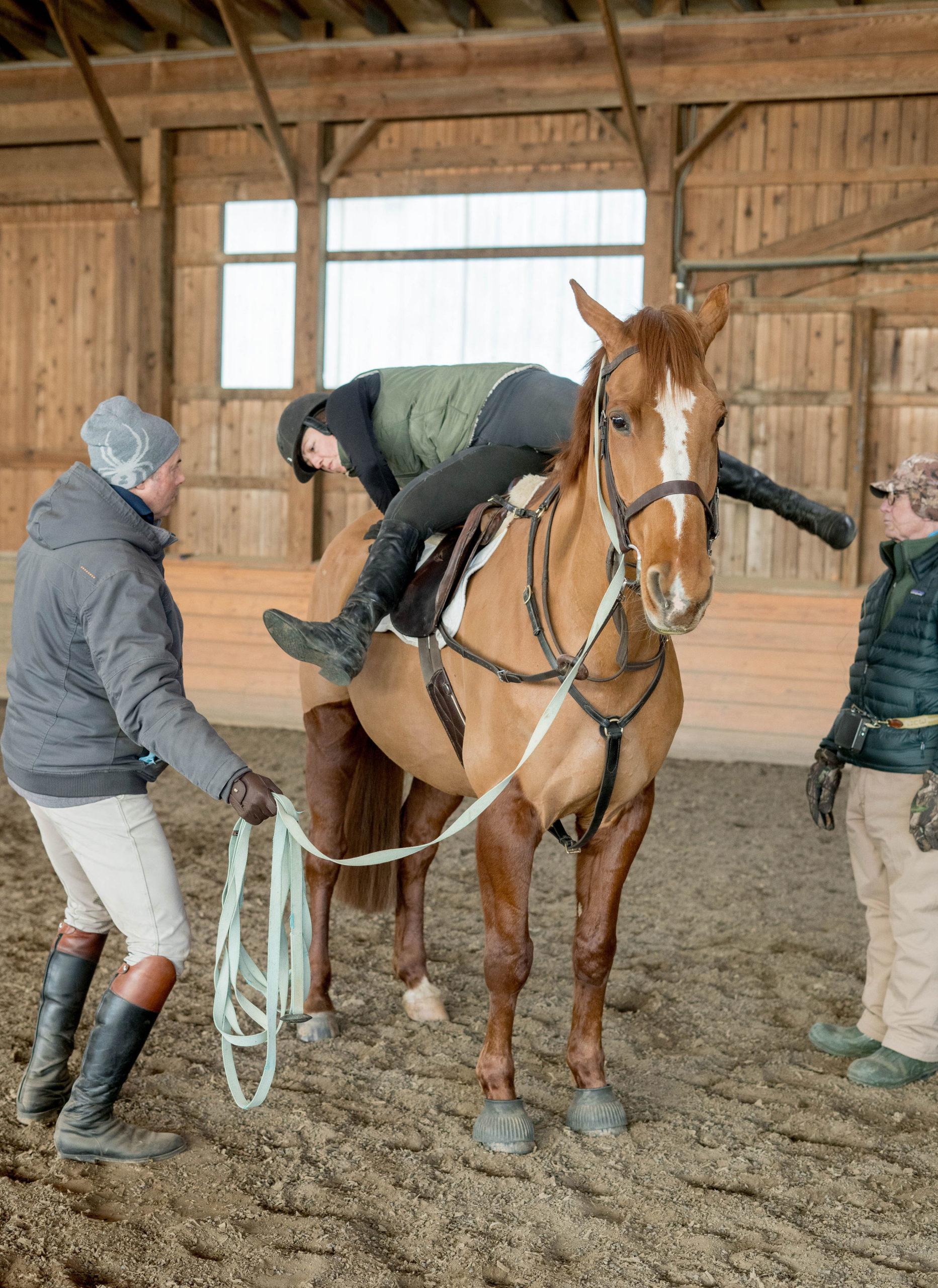 Flying dismount– Heel click, push yourself away from the horse and stick the landing like a gymnast.

Backflip– Both legs on the right side of the horse and your left hand on the pommel and your right hand on the cantle. Shimmy your seat down the flap of the saddle and then kick your legs up and over you until you land on the ground facing your horse.

These exercises were all done in repetitions of five.

I can’t say I was feeling super confident after hearing all of the exercises, but I was the lunger first, so I did get to watch Clare do everything. Despite knowing that I’m less flexible than she is, I felt better after watching everything. Later in the week, when I watched things like the canter side saddle, it created some form of dread.

Day 1 came and went, no one fell, we laughed A LOT and despite all waking up feeling a little sore, there was a sense of confidence when we entered day 2. This however was also the day that the “gloves came off”. During our lecture we didn’t actually talk about which gaits we’d be doing for each exercise. I felt really comfortable with body twisters and windmill at the canter. I thrive off of counting around a course, so these motions felt like my body counting the strides. But when I witnessed going from the walk to the canter in side saddle, I peed a little.

Although I had picked the laziest, most comfortable school horse for Clare and I, I was still panicking when it was time for the transition. Panic makes you do really dumb things, like tighten every muscle in your body even though you know you need to relax in order to follow the canter motion. As if picking up the canter wasn’t bad enough, I had to return my left leg to the correct side, switch my hands and move my right leg over the neck, all while cantering. Watching back the video, I know I was being a huge baby, but in my head it was the most terrifying task of the day.

By day 3, you could see the pain in everyone’s faces. The mild soreness we felt on day 2 was a distant memory and today we all felt like the oldest people to attempt Hell Week. Day 3 brought on the new activity of doing sit ups at the canter, which no one seemed to enjoy. Luck was bestowed upon me this day, I did not have to do canter sit ups. Why you ask? Well because I had an epic launch off my horse while cantering in side saddle. I earned my first “honorable scar of combat” (I’m not sure anyone speaks as eloquently as Jimmy). I didn’t bring any pride to these lessons, so fortunately the only thing I damaged was my left hip that I landed squarely on.

That night the doctor assured me I didn’t have a fracture and I limped into day 4. The rest of the week was somewhat limited for me, since I didn’t have a great range of motion and a decent amount of pain. I was bummed about that, but happy I didn’t get taken out completely. My unscheduled flight with air-Jimmy meant I had to use a different horse for day 5 and 6. On a slightly confident whim, I chose my horse Duncan. He may spook at dead grass, but he somehow doesn’t mind acrobatics on his back. It was an invaluable opportunity to improve my seat on my own personal horse.

I expected to learn a ton, and I wasn’t disappointed. If you’re a Jumper Nation fan, you’re likely a hunter or a jumper, not an eventer. It’s also likely you’re familiar with the H/J way of doing lunge lessons and no stirrups. Because the focus was on our dressage position, Jimmy wanted our leg as long as we could manage, with droopy toes. I have pictures to prove just how hard letting my toes droop was. What I also learned, however, was that by lifting my toe, I tense my ankle and by association my whole leg, making it much harder to sit with the motion of the horse’s spine. Everyday I became more aware of what I tense in my body that keeps me from being able to sit deeply and correctly. With everyday that our seats and positions improved, we felt our horses become more sensitive to the littlest change in our back and seat. 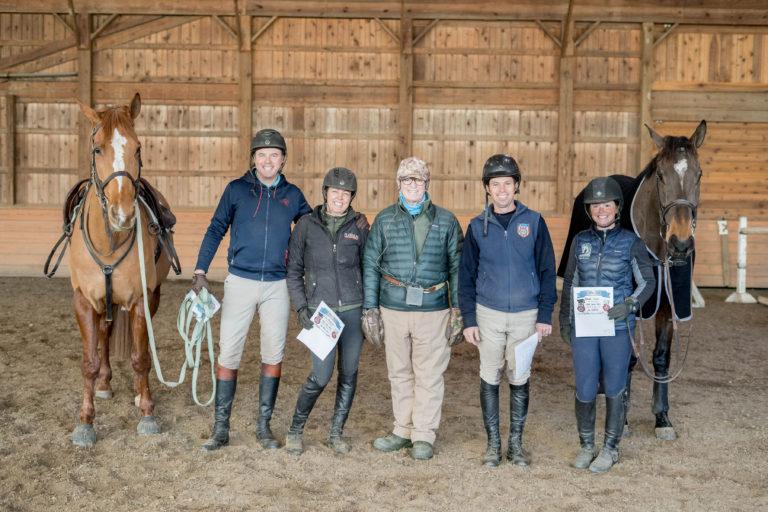 Overall, my Old Folks’ Hell Week experience was a 10 out of 10. I can’t wait to take these exercises and start using them for my students.