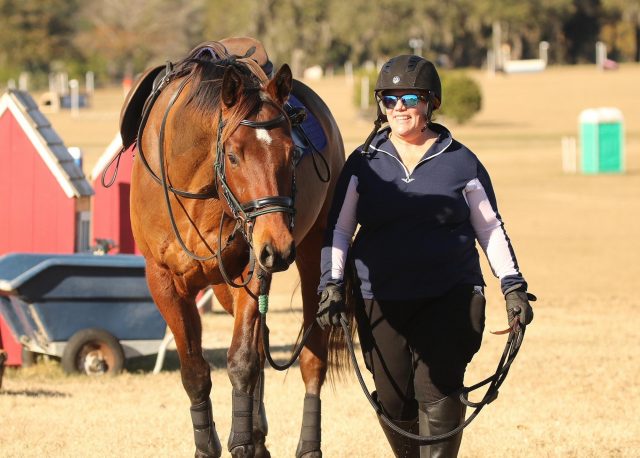 “I know this is the absolute best decision – for him and for me. Accepting that you need help, and then actually accepting help, is progress. Team Spider has more members now, and that is amazing.”

Following the announcement that the Retired Racehorse Project‘s 2020 Thoroughbred Makeover and National Symposium, presented by Thoroughbred Charities of America, will be postponed to 2021, competitors have been working to decide what comes next for them and their mounts. Today, blogger Libby Henderson discusses acknowledging one’s limitations and seeking help when necessary.

I’ve written several times about recognizing how much the assistance of friends in bringing Spider (JC Gossamer) along has meant to me. Without the wonderful help I’ve had with him, I’m certain I would have given up already. 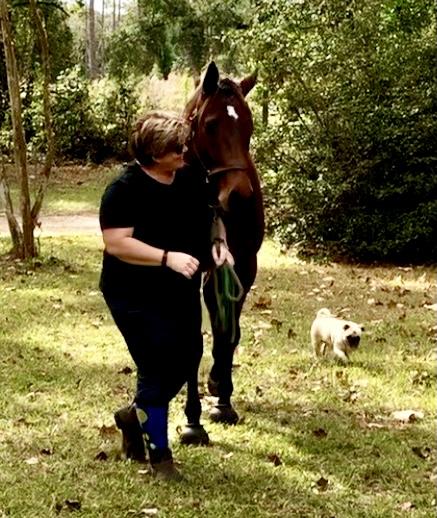 Spider with me on a field trip. Photo by Kristina Littlejohn.

With Spider, there hasn’t been anything that made me think I couldn’t do this, but I underestimated the effect of aging on myself, and the demands on my time. I realized that perhaps what I need is to retool my approach.

Since I’ve last written a Spider update, he’s been out of state on a trip to go cross country schooling, to a show at the same facility, to Winter Eventing Camp, and is now at sleep-away boot camp with a good friend who is a trainer.

When we went along on the cross country schooling trip, the plan was for him to hack around with the group, maybe trot over some logs on the ground and play in the water jump. I got on thinking I would ride him with the group, and then switch horses with Kristina, so she could play with him a bit on the course. It was a solid plan — until I used a different pad/girth setup and as I turned to ask for help tightening my girth and slid right off of him and hit the parking lot. I landed, naturally, on my bad hip/side in the gravel, and when I got back up and brushed the blood and dust off, I decided to just walk him along with the group and work on some groundwork. It was only an equipment malfunction, and I should have known better, but seriously? I was up for only 15 seconds?!! Sigh.

He did great walking around, and it was a good idea. He was pretty spooked by the horses galloping by and splashing into the water, and we were able to work on him being left behind and settled nicely with all the activity around him. Kristina was able to get on him and school a few logs and the water and it was a positive for his training. 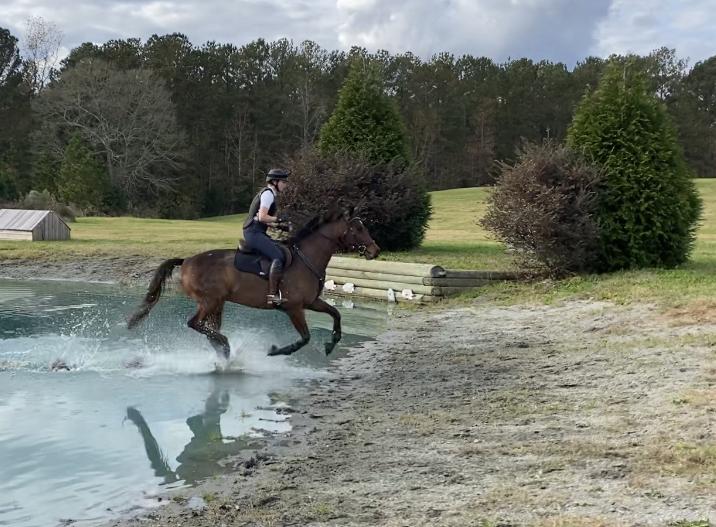 Spider and Kristina in the water jump at Poplar Place Farm. Photo by Libby Henderson.

It also showed me just how poor my own fitness was — after walking him around for a couple of hours in my xc vest and helmet, I was toast. Nonetheless, I decided to go ahead and enter both him and my mare in the schooling show that was upcoming, just to do Intro dressage. After all, how hard can that be?

Right. I also didn’t take into account how much the hustle and bustle of getting both horses ready with all their stuff, and getting my horse trailer ready to stay in, would wear me out. By the time I arrived at the show, I was exhausted. I didn’t sleep well (I forgot just how cold it could be in a metal horse trailer when it is below freezing outside and the heater wasn’t started soon enough!). The day of the show, with all the other rides, and just caring for two horses, I realized I was in no shape – mentally or physically – to ride my own horses, and scratched them both.

Could I have done it? Sure. Was it a good, safe idea? No. Was it the best thing for either horse in their training? No. They both deserve the best I can give them, and while you can’t wait for everything to be perfect, I can make certain that when I ride into the ring, I’m as prepared as I can be and not exhausted. The voice in my head heckled me, saying, “You spent all the money and invested a lot of time to come to this show, and how can you chicken out and just give up?!”

It wasn’t giving up; it was a strategic retreat. The horses both learned things. Going to a busy away show is a big deal, even without riding a test. I did realize that caring for two horses was tough and decided that I would only take Spider to Winter Eventing Camp with Tik and Sinead Maynard after Christmas. That way, I could focus only on him and what he needed.

We rode him between the show and Christmas, and he was difficult and fussy, both for me and for Kristina. We weren’t sure what was going on and what was causing him to behave so differently. Prior to leaving for Camp, I had a call from a very good friend who is a trainer at a barn near Tampa. She talked seriously with me about finding someone who could ride him regularly and keep him in steady work through the winter, when I just cannot get in a daily ride. Bless her heart, as my response was, “Can you take him?!” 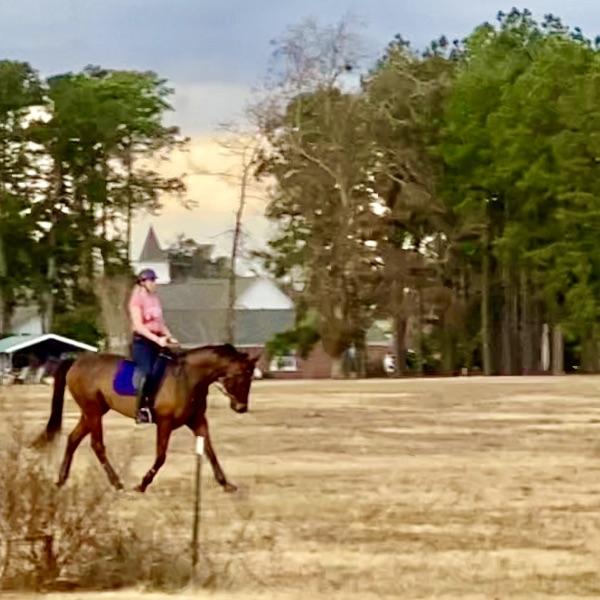 Kristina and Spider at home. Photo by Libby Henderson.

When we arrived at Camp, Kristina rode him that afternoon and schooled him in the big cross country field at the lovely Majestic Oaks in Ocala. The next morning, we had the first session with Sinead up at the Dressage arenas. It was about 28 degrees and he was a loony tune. Sinead was able to work him on the line a bit and talked to us about how to work with him. Kristina then schooled him at the walk/trot/canter. 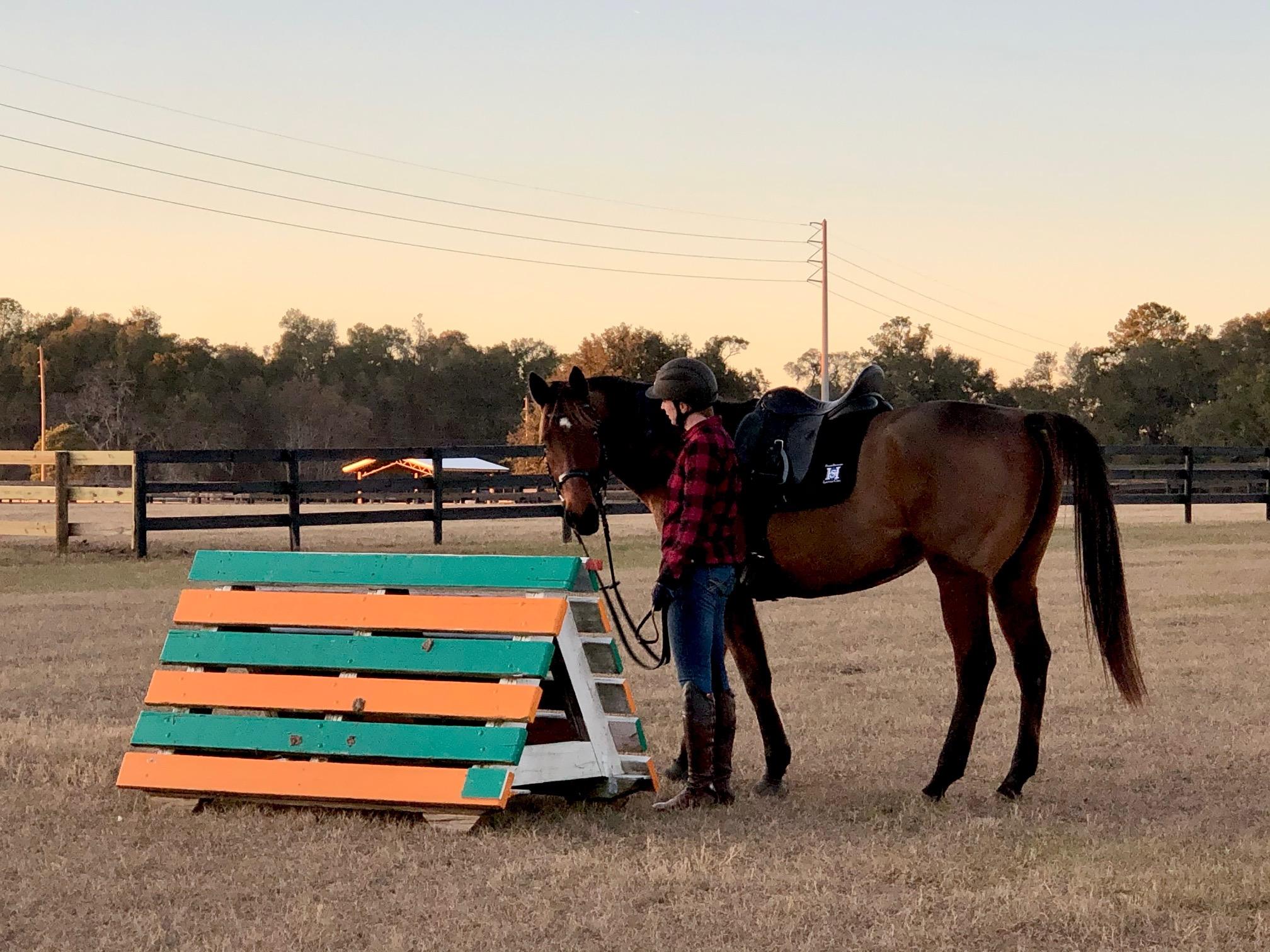 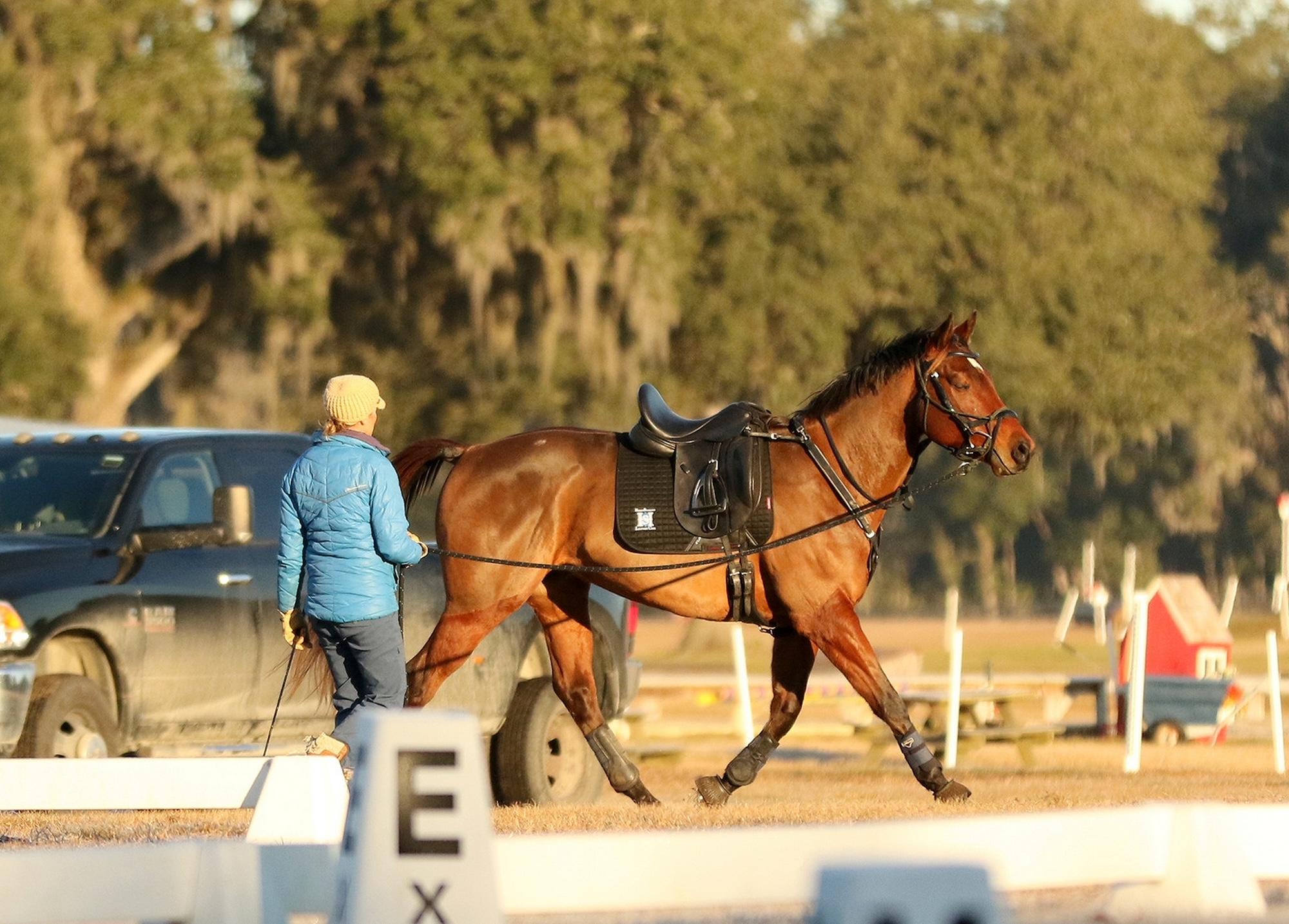 That afternoon, she rode him in the stadium schooling session with Tik and he wasn’t bad, but he wasn’t great. He was kicking out at her leg and found maintaining a canter on a circle – even a big one – really hard. So, the next morning, which was a grid work lesson, Sinead had us plan to bring him alone and she spent some time working him on the line. He was truly horrid. Tik came to the rescue (this horse is really super for Tik, instantly behaving any time Tik takes his lead rope. If you don’t believe that horses respond to a certain energy, he’s the perfect example). 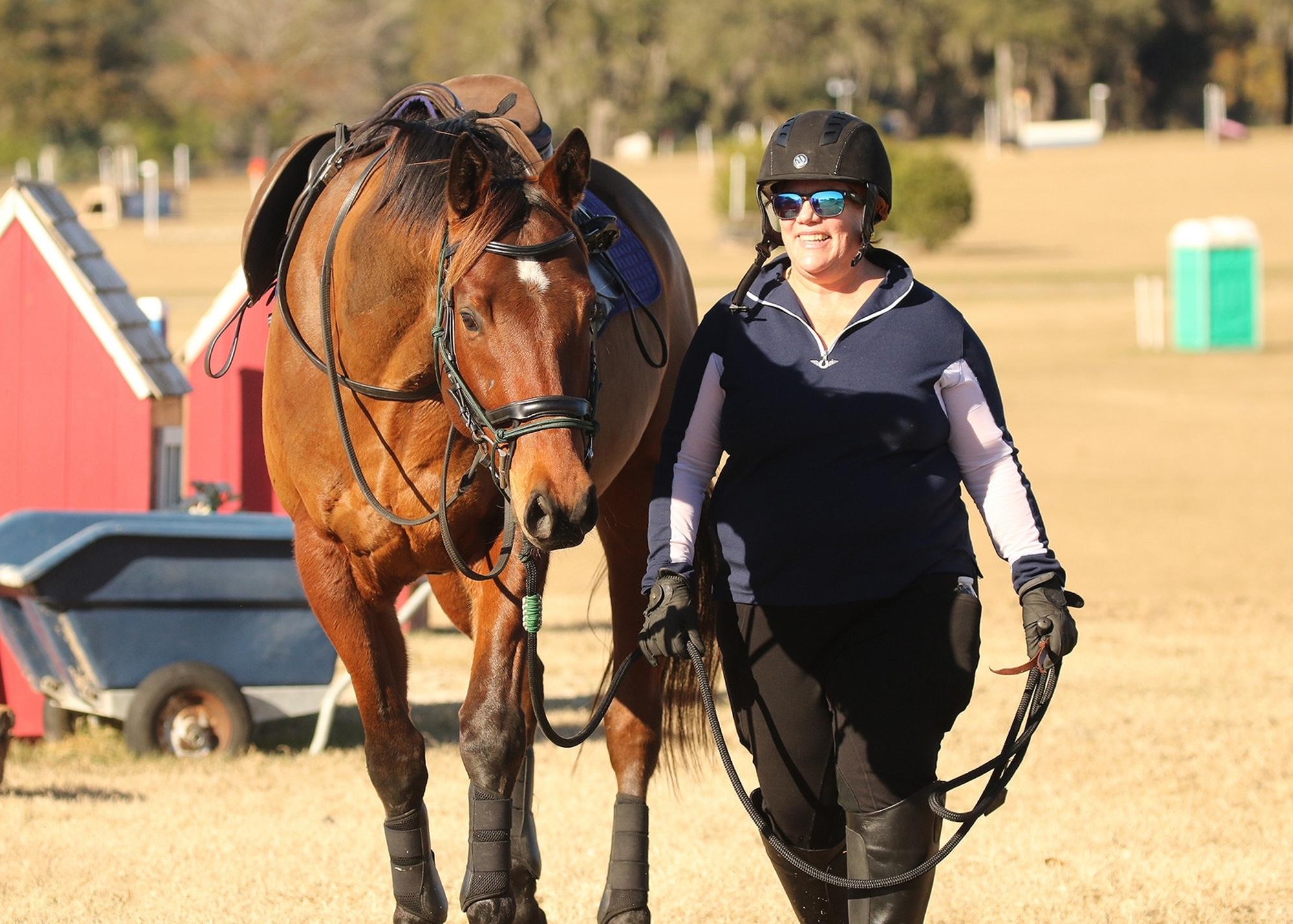 Spider and me. Photo by Lisa Madren Photography. 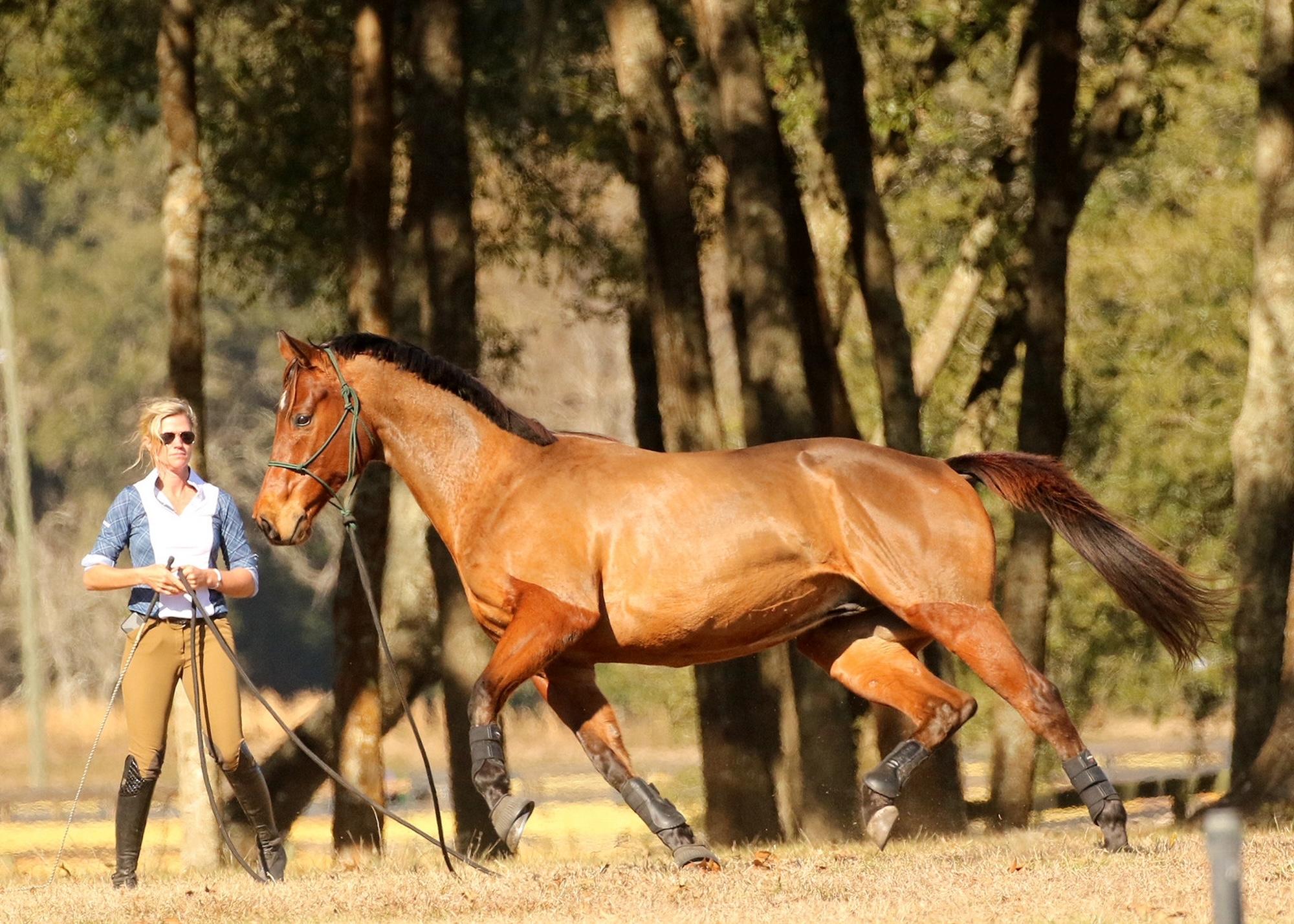 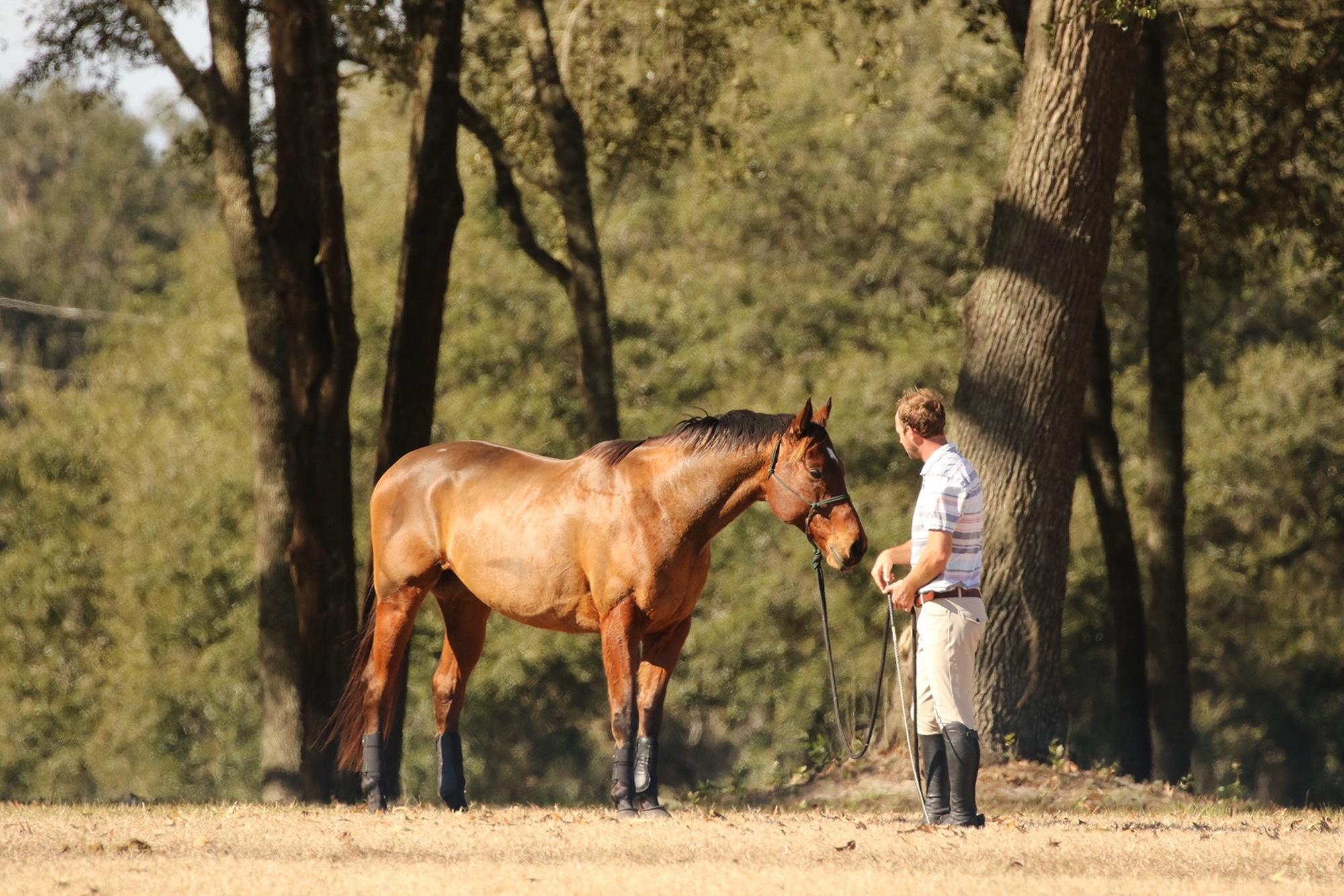 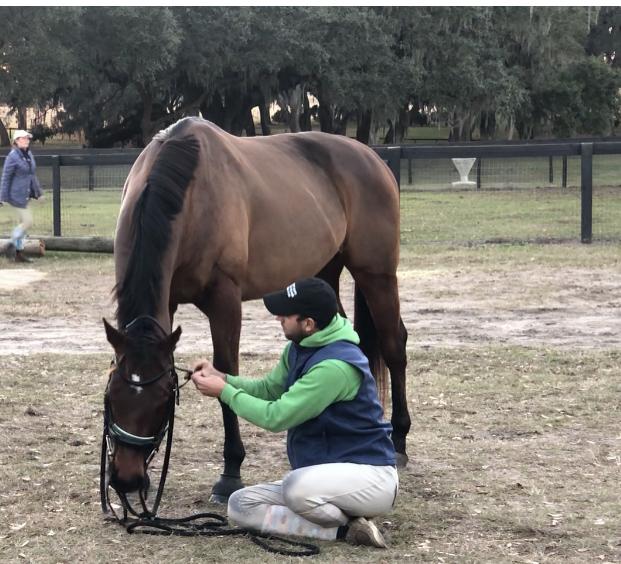 Tik bridles Spider from the ground. Photo by Kristina Littlejohn.

We decided that his behavior was telling us he was in pain and very unhappy. So he was evaluated by their excellent vet and was pretty reactive. So, we set up an appointment with a well-respected sports medicine veterinarian in Ocala … where he was unaccountably close to perfect. He was not lame or sore enough to do any diagnostics. Go figure. 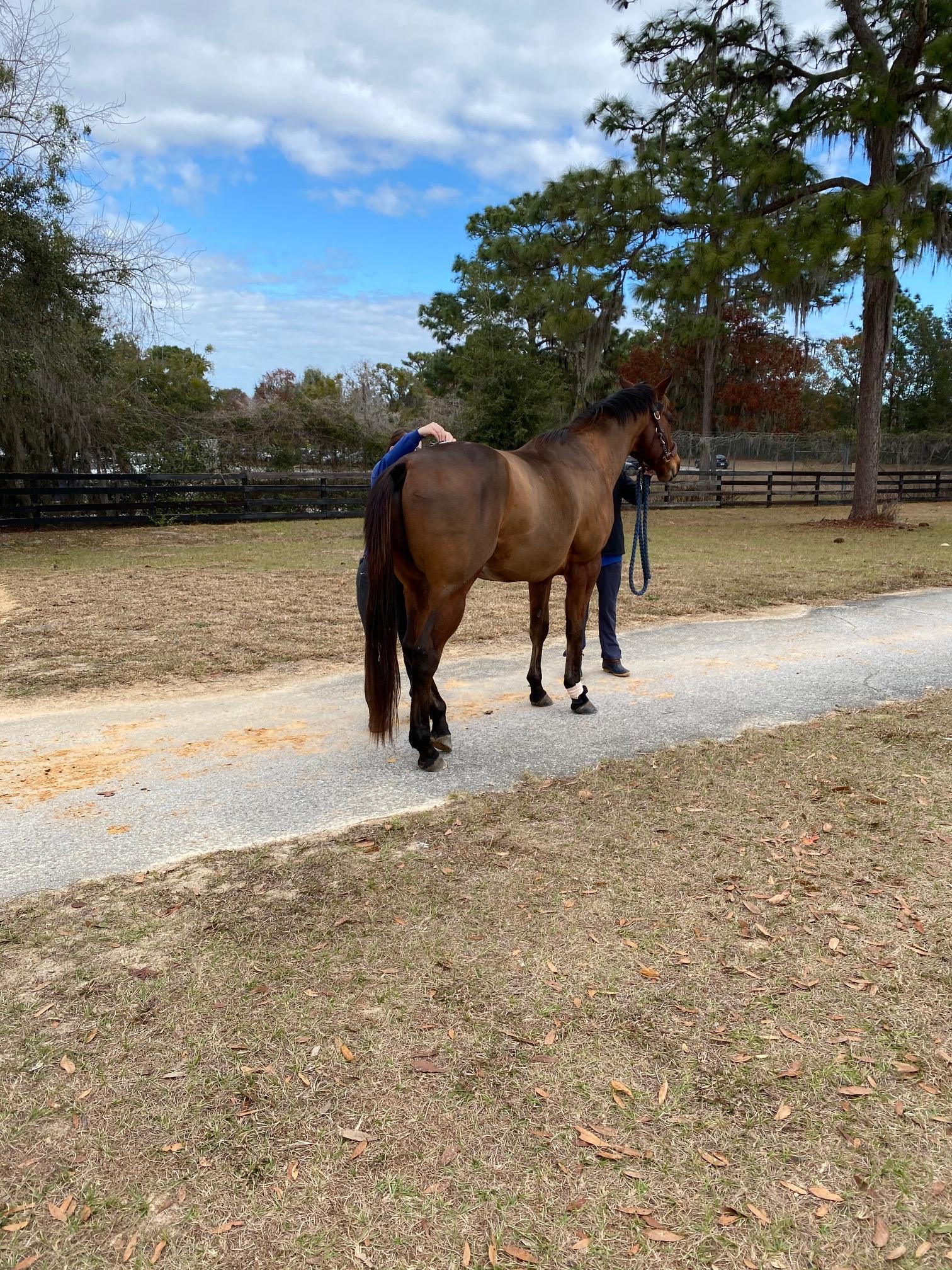 Spider at Peterson & Smith Equine in Ocala, getting checked with the cool Lameness Locator technology. Photo by Libby Henderson.

So, I loaded him up and took him to boot camp. The prescription was to put him in regular work and see if he shows anything, but – essentially – the conclusion was that he was just body sore. And expressive about it. Since he’s been in training, he’s been in regular work, building strength slowly and he’s been fantastic for her. He’s going to stay with her until after Red Hills Horse Trials in March, which is when my life will be less busy, and also when daylight savings time returns and I will have more of an opportunity to ride him during the week. 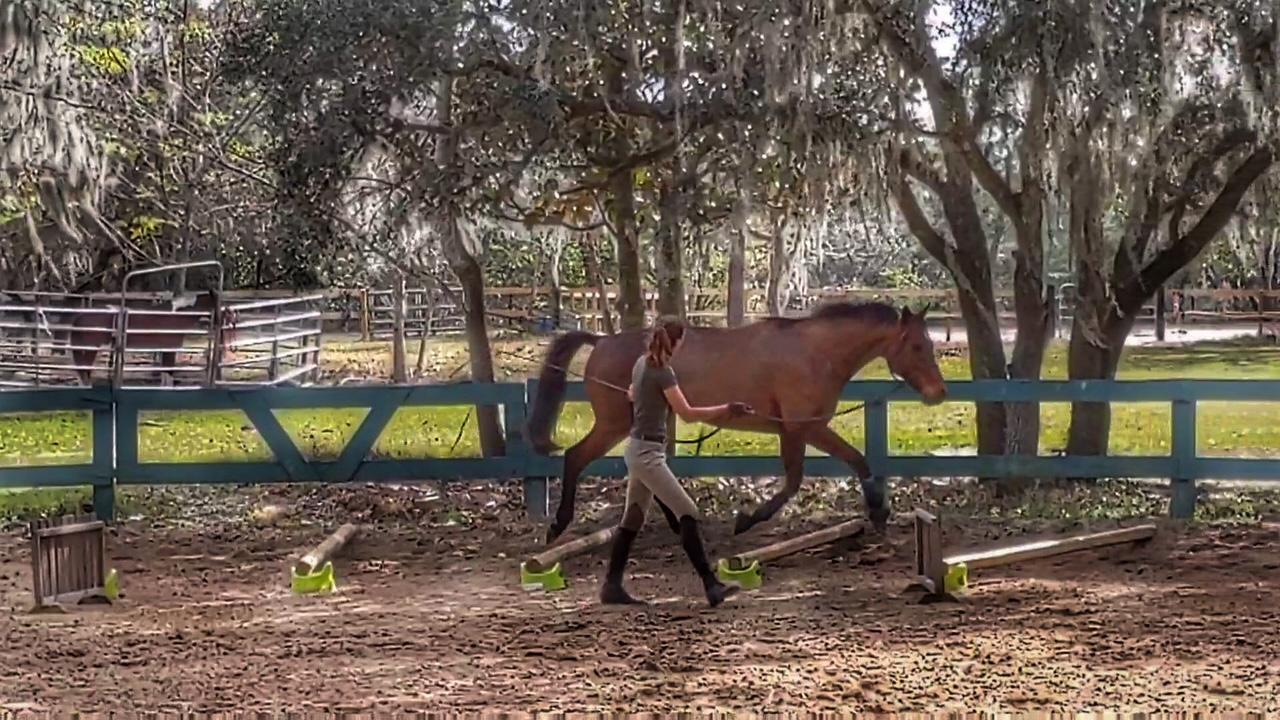 Leaving him was hard. Not because I don’t trust my friend to look after him, as well or better than I do myself. I cried all the way back to Ocala because sending him away meant admitting I can’t train him myself. Honestly, that has been true all along. I could not get him started without Kristina’s help, and she’s done the majority of the riding with him. It was time that I accepted that. Under the rules of the Makeover, I don’t have to be his primary rider until after July 31st, so having a trainer ride him is allowed. It was really hard to leave him behind. I have four other horses at home, but I miss his goofy face meeting me at the gate several times a day and I miss seeing him outside my window. 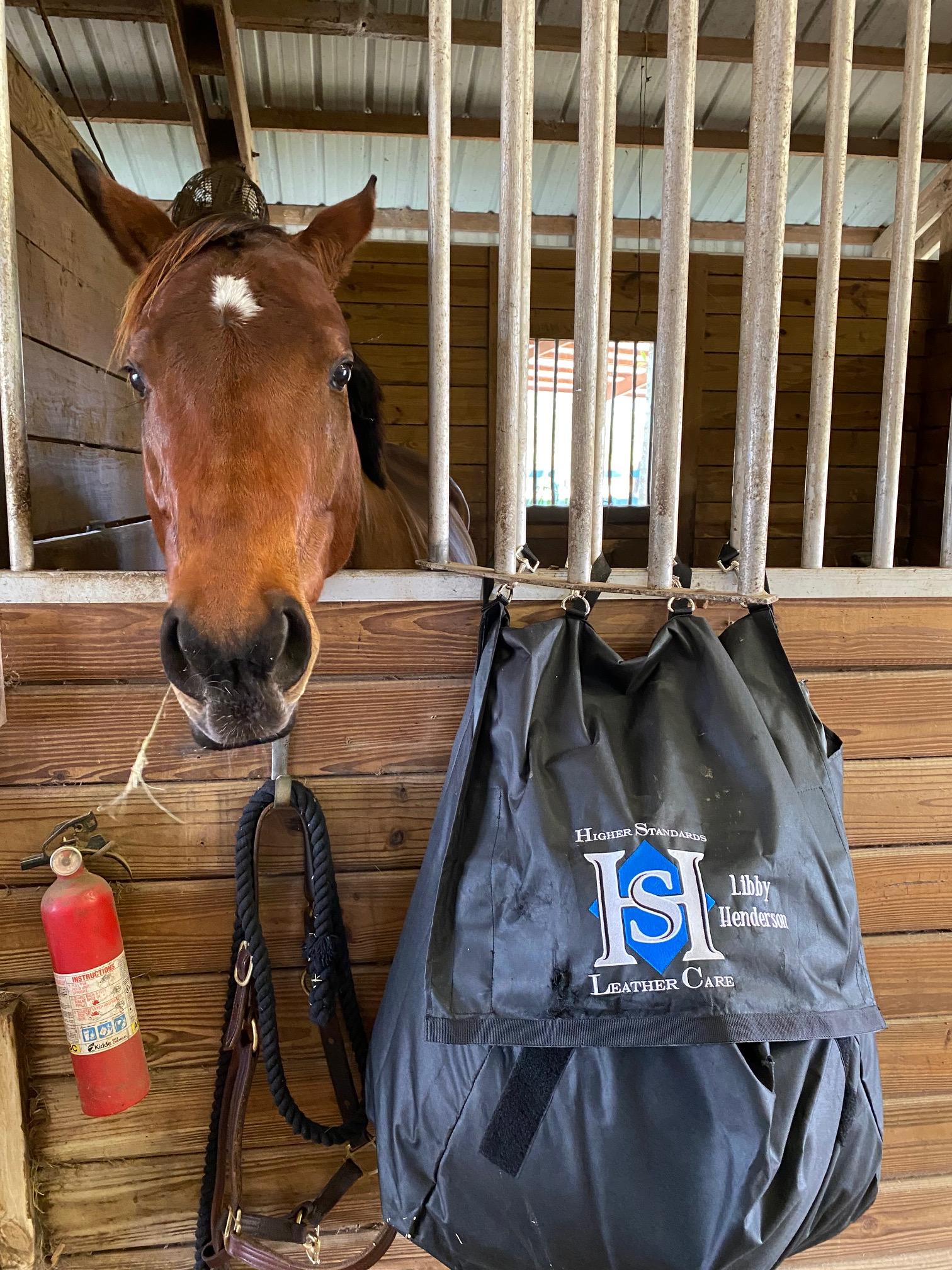 Spider in his stall at boot camp, looking for trouble to get into. Photo by Libby Henderson.

I know this is the absolute best decision – for him and for me. Accepting that you need help, and then actually accepting help, is progress. Team Spider has more members now, and that is amazing. I can’t wait to see where we go from here and I look forward to my first trip down to take a lesson on him!