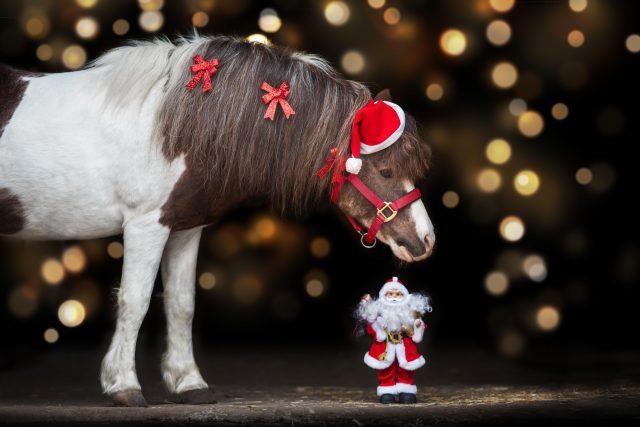 M is back — and this time he is on the case of the missing Mrs. Claus. He and his crew at M&T Pony Detective Agency are going undercover at the North Pole. 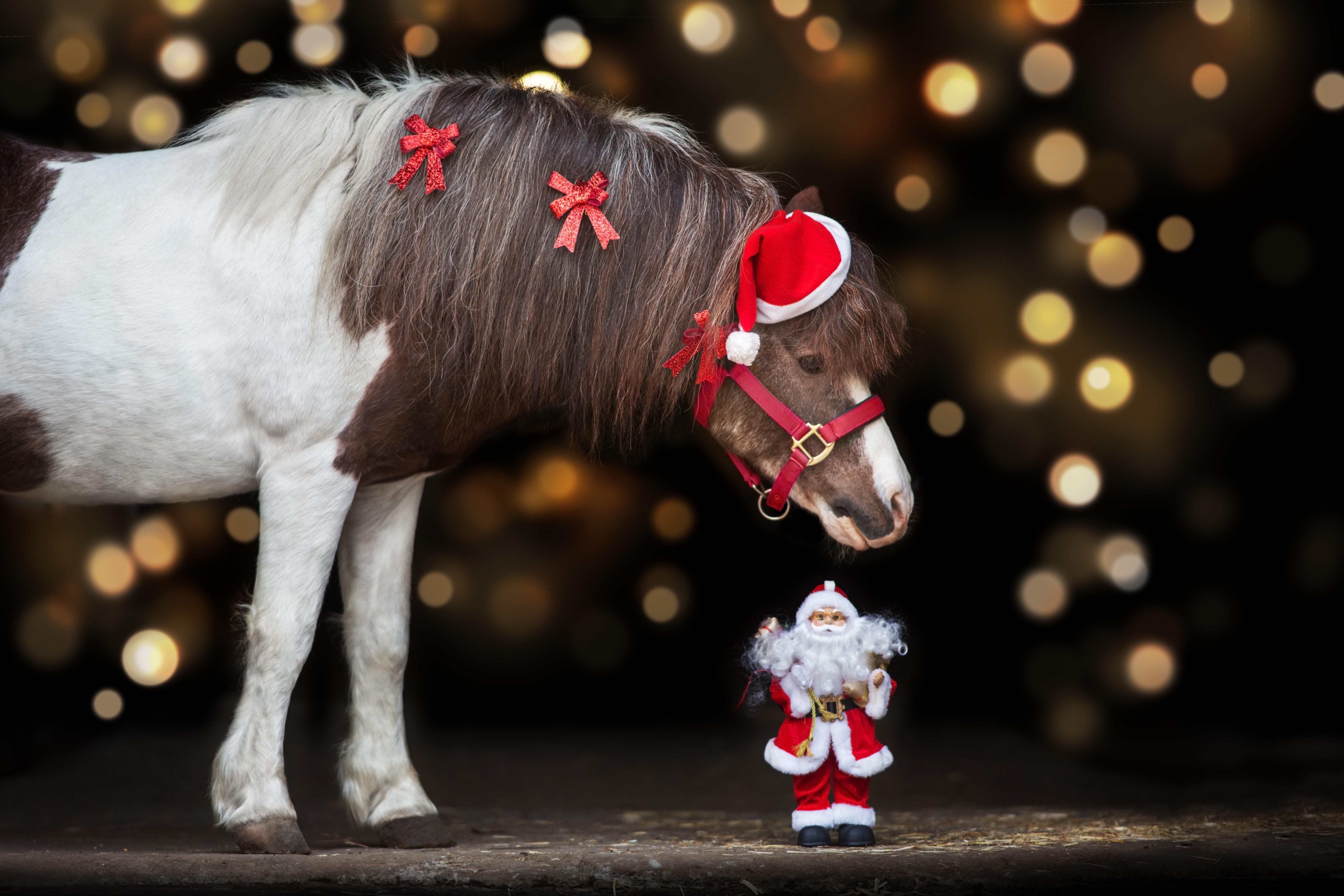 M huffed out of breath as he turned the street corner, and jog trotted toward the barn. The vet was forever on his case about his weight, so he was determined to get a head start on all the carrot cookies, apple juice nog and mint treats he was bound to consume over the Christmas holiday. When he was almost to the barn door, M slowed and walked the last several yards. That was enough exercise for one day, he thought. After all, too many healthy things might prove to be harmful over time.

Inside, the office secretary, Sasha, called over, “There’s a Mr. Red Kringle Bells in your stall office. He says you know him.”

M paused by her stall door as he tried to place the name. “Really,” he said, looking inside the stall door. There, Sasha and the new mini mare office intern, Joy, were busy stringing peppermints, apple slices and dehydrated carrot pieces together as a garland to decorate the office. It appeared to M the girls were eating more of the treats than they were managing to get onto the string, but he said nothing. He knew when it was just him and the girls in the office, he was outnumbered from the start.

M turned away and headed down the barn aisle.

The name Red Kringle Bells was a distant part of M’s past when he had worked for the Pony Secret Service. Back then the two were best friends on the job, busting horse show hay smuggling rings, and drug dealing TB thugs. But when Red was transferred to the North Pole unit, M lost track of his friend.

“I cannot believe it,” M said, as he entered the end stall where his office was located. “It’s been, what? About ten years?”

“Yeah, about that,” Red said. He was a small, sorrel chestnut mini horse, with a crooked blaze and one white foot behind. “I never thought you’d be one to retire. But I see you are keeping busy.”

“After the last bust of dirty hay cubes, I was overdue for a change of pace,” M said. “So how about you? What are you up to? Still with the service?”

“Well, M, that leads me to why I am here,” Red began. “As you know I work at the North Pole branch, specifically with Northland Security now, and I need to call in a favor.” M moved into the stall, sipped some water, all the while listening. “As of yesterday morning, Mrs. Claus was kidnapped. Her captors are demanding Santa not go on his yearly route delivering toys if he ever wants to see her alive again. They are demanding Santa sign over all the special licenses and permits for clearance with countries all over the world to travel uninhibited through their air space one night a year.”

“And so how does this involve me?” M asked. “Sure I feel bad for Mrs. Claus, but I have nothing to do with Northland Security. “

“Wait,” Red held up his hoof, “There’s more. Recent intelligence information has indicated we have a leak in Santa’s operation, most likely an elf, compromising Santa’s whole distribution network. What it all boils down to is the service needs help from outside the system.”

“But Red, I retired from the service a long time ago.”

“Yes,” Red pressed. “But that is just it. You have never worked for the Northland branch, and right now we need someone that is unknown.” M shook his head. “If this is really an elf gone rouge, we can’t risk another leak inside the branch. We need an unknown element.”

“And what about Santa? Is he ok with this?”

“Well, to be honest, we have not told him,” Red said. “He thinks the kidnappers are bluffing and it will all blow over by Christmas Eve.”

“The latest intelligence indicates it’s the Thoroughbred Mafia behind the kidnapping. We’ve traced their activity to this area. And, that’s where you come in.”

“We need you and your staff to find and rescue Mrs. Claus. And, do it before the night of December 24th.”

“Yes, Mousy,” M said into the phone mic pinned to his halter, “I know your mother is still recovering from her surgery, but I am sure Joy could help her out while you help us work a case for a few days.” M’s feline private investigator, Mousy, had been taking time off to help his mother, Mama Kitty, who had just come home from the local animal hospital after a hip replacement surgery. M had known them for several years and did not want to take Mousy away from his elderly feline mother, but Red Kringle had pressed how critical the situation was. “I have already talked to Joy, and she is happy to stay with your mom. It’ll be fine.” M ignored Mousy’s verbal objections on the other end of the line, then concluded the call saying, “See you here in the office in an hour.”

Now to figure out what pasture Tweak went paw-fishing in. After leaving two messages on Tweak’s phone, Tweak called back a half hour later.

“Why didn’t you have your phone on?” M asked, frustrated by not getting through right away.

“I didn’t want the sound to scare the fish,” Tweak answered on the other end.

M smirked at the whole notion of fish hearing a cell phone, then quickly gave Tweak the basics of the crisis case.

“Can you be back to the office in thirty minutes?” M asked. “Mousy is on his way, and I am sending Joy over to look after Mama Kitty.”

An hour later the whole staff of the M&T Pony Detective Agency was gathered around the grain bin table in the feed room, which at times doubled as the office conference room.

“I just got off the phone with our Northland Security contact,” M announced to the group. “He says the best way to locate Mrs. Claus is to infiltrate Santa’s network of employees.”

“Yes,” M answered, “And, we need to establish an undercover presence fast. Anyone got any ideas?”

“Didn’t Red Kringle say they had intelligence reports that pinned the activity to this area?” Tweak asked.

“Yeah,” M said, looking at his notes. “They have it narrowed down to the Shokopea Village area, most likely where the stand-in Santa employees visit the kids and have photographs taken.” M turned a page in his notebook with his nose.  “The Northland branch has set up a cover for someone to work in the Santaland place, helping in the photography area. Sasha, would you like this assignment?”

“I can try,” she said. “Santaland. Is that where they sell those long strips of peppermint candies?”

M scowled at her, then answered. “Yes, but we are not there to taste test.” He turned to Mousy. “Can you see about blending in with the feral cat community at Mistyc Pond? That should let you roam around and observe things at Santaland without anyone asking too many questions.” Mousy nodded. “Good. Meanwhile, Tweak and I are going to go over Santa’s inventory logs, and scrutinize anything sent to this area.”

“What exactly are we looking for,” Mousy asked.

“Anything or any clue as to where Mrs. Claus is,” M answered. “We have to find her by Christmas Eve, or Santa’s whole operation will be ruined.”

M and Tweak stood next in line at Santaland, posing as just another father and son, waiting their turn to see Santa. Sasha spotted them in the crowd from her station inside the photography booth. When the line moved up, she whispered over to M.

“I go on a break in a half hour. Meet me over by the carrot juice place in the food court.”

M nodded, then inched closer with Tweak to see Santa.

Thirty minutes later the trio was huddled around a corner table in the food court dining area.

“Yesterday I opened what I thought was a box of photo stock paper for the printer,” Sasha said in a hushed voice, “but it was full of syringes and needles, like what the vet uses to give us our vaccinations.”

“Syringes and needles,” M replied, puzzled by her discovery. “Do they use them to put ink in the printers or what?”

“Not that I know,” Sasha said. “And then, one of the other elves came in. When I showed him the box, he tried to tell me Santa had been diagnosed with diabetes recently and did not want anyone to know. He told me to shut my mouth and go back to the photo booth.”

“Does this other elf have a name?” Tweak asked.

“Ringer Bell Raye,” Sasha answered. “He is kind of strange.”

“Well, most of the elves are young, pony or mini types, all excited to work for Santa on their first jobs, then there’s others like me, older, female, just earning a little extra, you know? But this Ringer guy is older, maybe teens or so, and he is a dark, TB type. Kind of sticks out. He gives me the creeps.” Sasha looked up at the clock. “Gotta go, break is over,” she said, then trotted back to her station behind the camera in the photo booth.

“What do you think about that?” Tweak asked, licking what was left of Sasha’s left behind Apple Juice Frosty.

“Not sure at the moment,” M said, looking down at his cell phone screen. “The Northland data base says our Mr. Ringer Bell has been arrested several times on drug smuggling, stolen goods trafficking, and fraud charges, but never convicted.” M pressed the call button with his nose, and then said, “I think we might want to know more about him.”

When Mousy’s voice came on the line, M quickly filled him in on this latest development and instructed Mousy to see what else he could find out.

M’s cell phone buzzed him awake around 1 am. Mousy’s words woke him up fast.

“Sasha has been kidnapped,” Mousy said. “I followed Ringer Bell Raye from Santaland, where he forced Sasha onto a trailer-tram headed for the Cantiberri track. They have Sasha and Mrs. Claus locked in stalls in a deserted hay barn.”

M shuttered. The Cantiberri race track was known as the home of the TB Mafia, where the northern branch of the Vinney T crime family stored and shipped various types of illegal contraband.

“And, there’s more,” Mousy went on. “My nose kept twitching down there, like there was some irritant in the air. So I snuck around back and found they have an adequan-meth kitchen going.”

Adequan-methotrexate was an intense pain narcotic drug prescribed by vets to many elderly animals to ease the ailments of old age. Even M’s neighbor, Grandpa Sonny, used it for his arthritic hock pain. Out on the street the drug was worth millions. Suddenly M understood the connection with the syringes Sasha had found, and the TB mafia trying to get access to Santa’s travel network. Having access to secured air space, even one night a year, would allow them to ship the stuff all over the world.

“I’ll call the Northland Security boys and get them down here fast,” M said. “Keep Mrs. C and Sasha in sight. I don’t want anything to happen to them.”

Tune in tomorrow for Part II 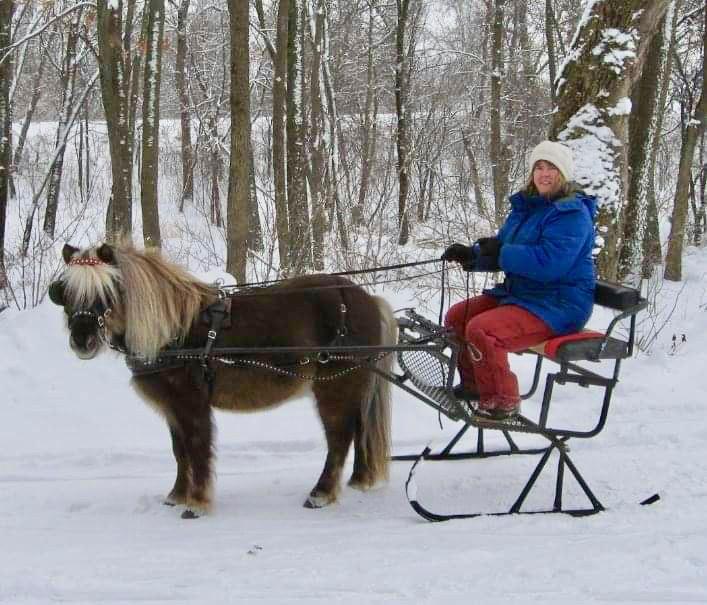 The real M, out sleigh riding with the author. Photo courtesy of N.A. Souer.