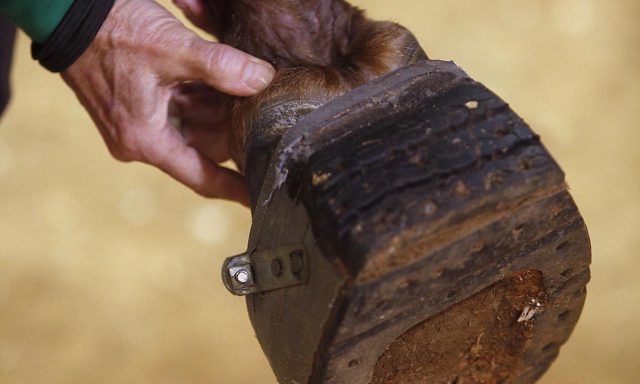 November 25, 2020DeAnn SloanContributor#PAST Act, #SORING, Guest EditorialComments Off on Op-Ed: A Compromise To the PAST Act Looking To Make It Through the Senate

Monty Roberts and Marty Irby offer support for the newest revision of the PAST Act in this guest editorial.

By Monty Roberts and Marty Irby

For the past fifteen years, we’ve been working together to transition the Tennessee Walking Horse, and the trainers within the breed, away from the painful practice of soring – the intentional infliction of pain to horses’ limbs and feet by means of applying caustic chemicals such as mustard oil, croton oil, diesel fuel, and abrasive detergents to the skin or inserting sharp objects into the horses hooves to create an exaggerated high-step known as the “Big Lick” that’s traditional in Tennessee, Kentucky, and other Southeastern states.

When the principles and methods of non-violent training were introduced to a group of influential Walking Horse trainers in 2005 in Shelbyville, Tennessee, they were astounded to see the results achieved in a very short period of time. Given that response, we felt we owed it to the horses to press for change and create new opportunities for those who sought reform in training practices and wanted to see the walking horse reborn in its sound and natural form – that beautiful stride and head nod rhythm that comes naturally and is unique to the breed. 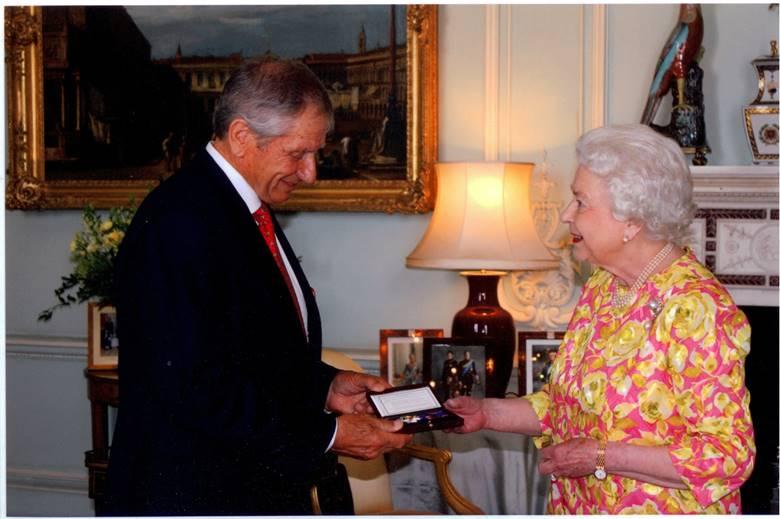 The next year, an effort to add a new division to the Tennessee Walking Horse Breeders’ & Exhibitors’ Association’s National Futurity for two and three-year-old trail pleasure horses prevailed, and we have since continued to see growth in that segment of the breed. But despite our efforts, and the continued growth of the trail pleasure division, the tough trainers in the breed continued to insist on utilizing devices that contribute to soring — large stacked shoes and ankle chains utilized in the showring to exacerbate the pain and achieve that “Big Lick” movement. In 2006, we sat and watched the Tennessee Walking Horse National Celebration fail to crown a World Grand Champion for the first time since the inaugural event was held in 1939 because the majority of the contenders had been disqualified by the U.S. Dept. of Agriculture due to evidence of soring.

When the Prevent All Soring Tactics (PAST) Act, H.R. 693/S. 1007, was introduced in the U.S. House of Representatives in 2013, we spoke out publicly in support of the measure that would not only ban those terrible devices on the horses’ feet, but also would implement serious felony level penalties for those convicted of soring. We’ve continued to press for enactment of the legislation Congress after Congress, and our belief that the PAST Act will end soring has not waivered. 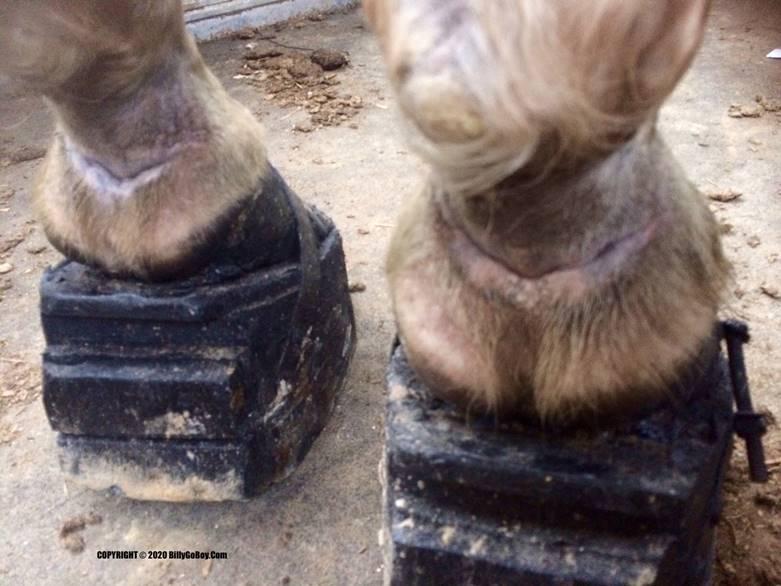 The political reality is that despite the bill clearing the U.S. House in 2019 by a vote of 333 to 96, the measure has died in the U.S. Senate, and is now buried under piles of other legislation that has met the same fate. Given that reality, the PAST Act as written has virtually no chance of becoming law. Any one Senator can continue to block the bill and history has shown us that will continue to occur. In order to break the gridlock, we’re now advocating for a new reform effort that would amend the PAST Act to still eliminate the chains, the large, stacked shoes, the industry’s self-policing program, and upgrade its felony-level penalties.

In collaboration with leaders in the breed that had no input into the original PAST Act, the revisions, which are still being tweaked to satisfy mainstream equine and veterinary professionals, would require more than a fifty percent reduction in the shoe, and go further than the original PAST Act to establish science-based, objective inspection protocols, and eliminate the use of a gruesome device known as the tail brace – one that was utilized on the first World Grand Champion, Strolling Jim in 1939, and almost every winner since. To achieve a certain look that makes the tail stand up over the horses’ back, the muscles and tendons in the tail are severed, and the horses are forced to live in a contraption that maintains a full break in the tail bone. The horses are then shown in the ring with a metal u-shaped stand under the tail that’s tied down extremely tight with a shoestring, cutting off the circulation in the tail. This device’s existence predates the use of the stacked shoes and chains by two decades or more and is the foundation for the use of all of the violent paraphernalia in the showring.

Responsible leaders in the walking horse breed now see that foundation of artifice must be eliminated. We are seeing a change in the hearts and minds of stakeholders, and we must stand by those who have demonstrated a desire for transformation. We must show them, help them, and respect their good faith support for reform. 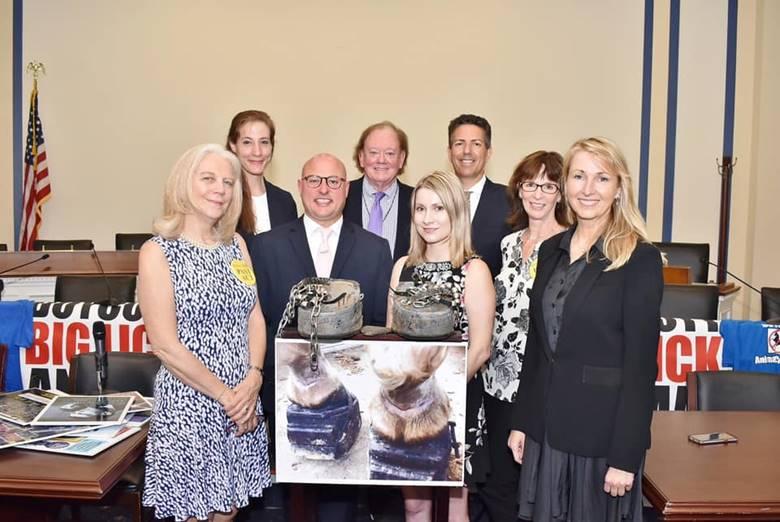 We applaud those who are stepping up for the Tennessee Walking Horse, and we are grateful to all of the people who joined together to negotiate the revisions to the PAST Act to finally end the scourge of soring. It was tough, imperfect work, but this collaboration has been undertaken for the greater good, and thus we are reminded of the words of President Teddy Roosevelt:

“It is not the critic who counts; not the man who points out how the strong man stumbles, or where the doer of deeds could have done them better. The credit belongs to the man who is actually in the arena, whose face is marred by dust and sweat and blood; who strives valiantly; who errs, who comes short again and again, because there is no effort without error and shortcoming; but who does actually strive to do the deeds; who knows great enthusiasms, the great devotions; who spends himself in a worthy cause; who at the best knows in the end the triumph of high achievement, and who at the worst, if he fails, at least fails while daring greatly, so that his place shall never be with those cold and timid souls who neither know victory nor defeat.”

We firmly believe there are no bad Tennessee Walking Horses. It is only the human element that has caused the Big Lick discipline to be a bad one.  Join us in helping finally bring an end to soring by contacting your U.S. Senators here at this link – it’ll only take one minute, and you will make a difference.

Monty Roberts is the world renowned horse trainer and bestselling author of The Man Who Listens to Horses and Marty Irby is the executive director of Animal Wellness Action in Washington, D.C., and a past president of the Tennessee Walking Horse Breeders’ & Exhibitors’ Association who was recently recognized by Her Majesty, Queen Elizabeth, II for his life’s work to end soring. Follow him on Twitter @MartyIrby.