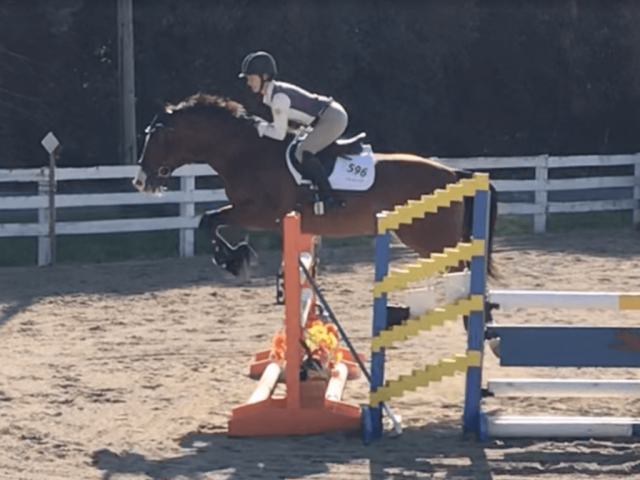 November 6, 2020DeAnn SloanSusan GloverBest of JNComments Off on Best of JN: Horse Showing Is a Muscle

“Showing is a muscle and I really just need to exercise mine; where we go isn’t as important as that we get out and do it.”

We did it! Steve and I finally got back in the jumper ring, and it happened before the end of 2020! Now, this was a schooling show and there were…um…only two people in my division, but hey: it’s 2020. You take what you can get. Plus, unlike my last attempt, this show had good footing, fun and challenging courses, good jumps, and they weren’t pretending that we are not in the middle of a pandemic. It was a safe, well-run, friendly show, and I plan to go back again next month. They also handed out candy at the end, which I fully endorse.

Was it a flawless show where everything went as planned, I rode perfectly, and Steve was 100% right there with me? I would like to say yes, but that would be lying. Instead, it was a good schooling show, and it let me know I have some work to do. The truth is that my boy and I are rusty. This is the first jumper show we’ve been to since last year, in October. That is the longest we’ve gone without competing and wow, was that apparent!

Here is a brief recap: the first class was Power and Speed. We went in, and Steve was immediately telling me he thought everything looked crazy. The jumps were very colorful, painted with lots of patterns on the rails, planks, and standards, and they had a bunch of fill and extra items decorating them. The ring was a good length but a bit narrow so the jumps were all close to each other. All of this made for a very busy-looking ring! Me looking at the jump, while Steve stares in alarm at the huge judge’s compound on the right! Photo by Jaime Loichinger.

Before Quar, back when I was showing regularly, this would have been a non-issue. My horse generally never looks at jumps; if he is going to spook it will be at the judge’s booth or something else outside of the ring, and generally I just have to remind him his job is in the ring and he’s good. This was not how things went at this show. Steve’s eyes were so wide I could practically see them bulging as we went around. He thought the jumps were scary and bad, so instead of a nice, flowing, forward round he was behind my leg the whole time. We had adds to a lot of the jumps and then out of the blue when I asked for a slightly long spot to a new jump, he dug in his heels and nearly popped me over his shoulder.

THIS IS NOT NORMAL. I was so flabbergasted that my horse had stopped, I sort of dropped the thread. I regrouped, got him over that jump, did the next one and then got totally lost. The nice people were all: “It’s the zig zag! Jump the zig zag!” I am not lying when I tell you that at least four of the jumps in there could have been called “the zig zag.” The other problem is that this class had 14 efforts and the size of the ring meant that they had to reuse fences, so you were jumping most of them twice throughout the course. At that point I was totally confused and not sure even what number jump I was on. I finally figured out which zig zag they were talking about and then my brain clicked back on and I was able to do the rest of the course. Yikes. Not a great start!

The speed class went much better, although we were still too slow, but I felt good about it and Steve seemed to be settling. Getting ready to go back in for the third class I was all: “Great! We are back in form!!” Here is where I reveal that I should not have let my guard down. This last course was a Table II, Sec. 2a, and I was looking forward to doing the jump off. It started great, and then we turned back to do Fence 4 and I asked for a slightly long spot and Steve dug in his heels AGAIN! WHAT????? This time he got a couple of thwacks, I wheeled him around, and we finished the course really well. No jump off, though. Sigh. Getting back in the groove! Photo by Jaime Loichinger.

After obsessing over it for a day or two, I came to a couple of realizations. Being perfect all the time is not only not possible, it’s kind of a dumb goal for an ammy. I am a perfectionist, but I am also not a professional rider and I only have one horse. My time in the saddle is limited compared to pros and ammies who are fortunate enough to have multiple horses (and more time than me!). This means that I might make mistakes a rider who is tuned up more might not. Or, as in the case of this show, that I might not react as quickly or as well when my horse isn’t on the same page as me. On the other hand, I certainly don’t feel like trying to be as correct and as on form as possible is an unachievable goal, so I’m left with the understanding that I can always do better. The second realization is that I really should have just cowboyed Stevie and gotten him to focus more on me and what I was saying to him, instead of allowing him to wander off, mentally, without me. In a jump school I had a few days later this was absolutely made clear; if we gallop and he’s balanced, Steve is right there with me. Even if we are rusty at showing I DO know how to ride my horse! Having a pro ride him in a show might make me feel better, but my trainers and I agree that I can do this myself. I am capable and we are a good pair, and that’s comforting to have tucked away into the back of my mind, too.

So, as this terrible, no good, very bad year gets past the ¾ mark, I feel happy to be finally back in the show ring. There aren’t too many rated shows left in my region, but there are some good schooling shows and at this stage, who cares about points? Showing is a muscle and I really just need to exercise mine; where we go isn’t as important as that we get out and do it. Wish us luck, and remember what I am trying to tell myself more often: to be kind to yourself when the day doesn’t go as planned. There is always another opportunity!