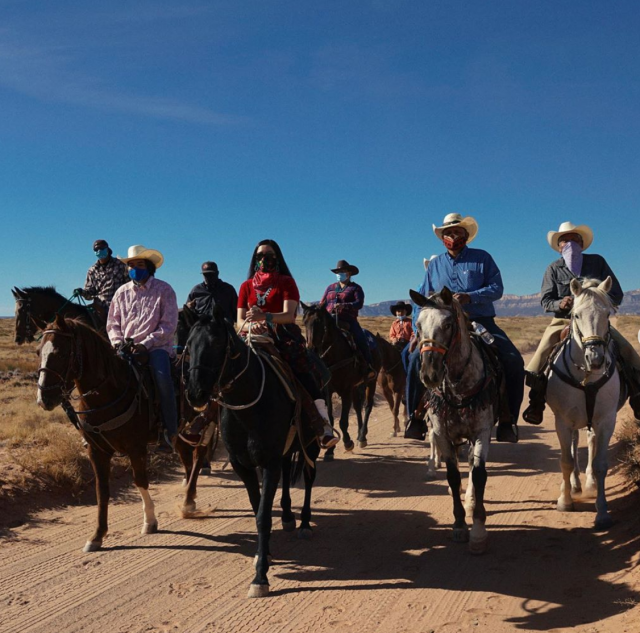 November 3, 2020DeAnn SloanDeAnn Long Sloan#NEWS, #VOTE!Comments Off on Voters Take To the Polls on Horseback

Some voters are including their horses in the democratic process, and we couldn’t be happier.

Today is election day in the United States — it’s the day that millions of Americans take to the polls. For some groups, that means something different than going to their local polling location on election day, dropping their ballots in a mailbox or even driving or walking to a drop location.

For some, voting also involves horses. And, let’s get real, as horse lovers, that’s definitely something we can get behind — voting and riding your horse? Yes, please.

For some groups, horses are a way to draw attention to voting and encourage more people cast their ballots. The Compton Cowboys have used their recent publicity as a way to encourage voter registration and get people to vote. However, it’s not all about publicity. As co-founder Randy Savvy (Randall Hook) told CNN, it’s about doing his part for democracy.

Compton Cowboys for the people. 🌎

Brianna Noble, who garnered much attention for her peaceful protests on horseback in the Black Lives Matter movement and is the co-founder of Humble, was another voter who used horses as a way to promote voting. She was joined by several dozen people and two other riders in a “Ride Out to Vote” event that traveled from Laney College to a ballot drop box in front of the Alameda County Superior Courthouse in Oakland.

Noble noted that anytime a horse is involved, people pay attention. So she used that “Look! A horse!” moment to positively influence her community.

For one Navajo group, saddling up and riding 10 miles to vote early was done as a way to empower young Native Americans to vote and to connect with their cultural heritage. There are limited polling locations around the 27,000 square miles of the Navajo Nation, and many residents have limited access to transportation. Therefore, Allie Young started a trail ride to help inspire others to vote.

We did a thing the other day. We voted early! We saddled up our horses and rode 10 miles to the early voting polls to make our voices heard by casting our ballots. We rode in honor of our ancestors who fought for our right to vote. We rode in honor of our ancestors who rode longer miles and hours just to exercise their right to vote for us, our people, our lands, Mother Earth and Father Sky, and future generations. We rode just like them and carried the horse spirit and horse medicine that reconnects us to Mother Earth, that balances us and brings us back to Hózhó – we carried that good medicine to the polls to fight for and protect the sacred. We encourage you to organize a horse trail ride in your community to honor our ancestors while you exercise your right to vote. Ahéhee and many blessings. ✊🏽🌎♥️🍃✨ #ProtectTheSacredWithYourVote [Photos by Talia Mayden (@taliamayden) / HUMAN (@thehumanstory)]

As Young wrote in her Instagram post, in addition to inspiring Native American youth to vote, she also organized the ride “in honor of our ancestors who fought for our right to vote. We rode in honor of our ancestors who rode longer miles and hours just to exercise their right to vote for us, our people, our lands, Mother Earth and Father Sky, and future generations.”

Most of us already are aware of the good horses can do in people’s lives, but it’s awe-inspiring to see others using horses to enact positive social change — especially in a year that’s been so riddled with difficulty in the United States.

If you haven’t already done so, follow these riders’ example. Get to you local polling station and cast your ballot. Do your part for democracy and make sure you have a voice.