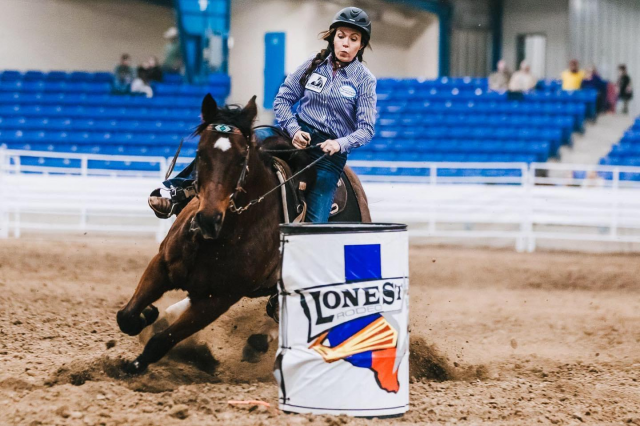 November 2, 2020DeAnn SloanCasey French#ESSAY, #seriesComments Off on Joe’s Journey, a Fight To Find Out the Unknown: Part I

When Casey French first got Packin French Socks (“Joe”), she knew he could be competitive at the highest levels of barrel racing. However, a series of mystery ailments and a gut feeling let Casey know that something just wasn’t right. Read the first part of Joe’s journey. 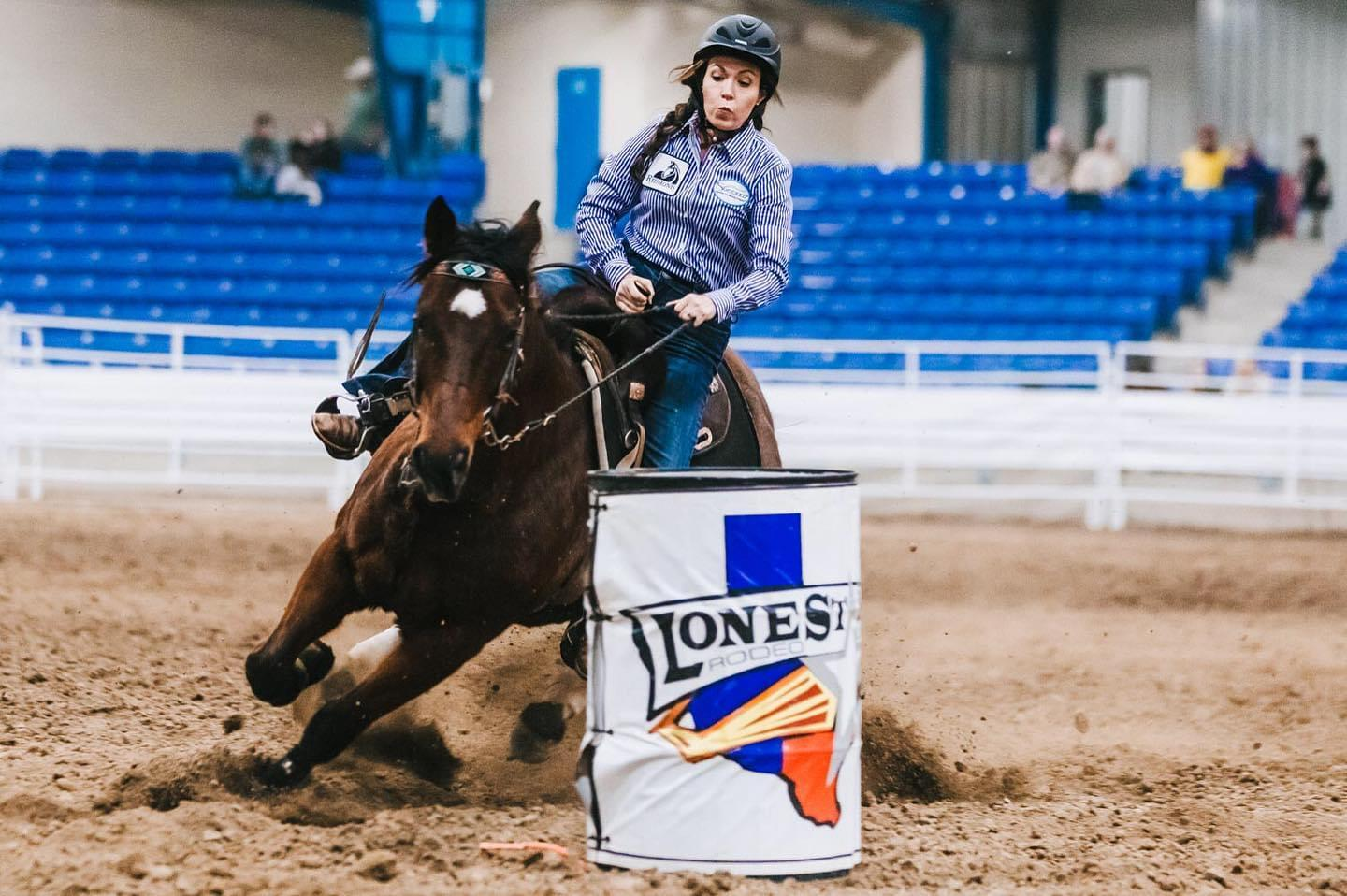 Winning the first round of Lonestar Rodeo Finals in January 2020. Photo by Emily Gethke Photography.

October 2010 was a time in my life that I will never forget. I found myself at a barrel race that a new found friend had put together at her arena in Madison, Indiana. We had a horse of hers in training at the time, so I decided to come up for the weekend.

While walking through the barns, I came across a bay gelding with a small white star. Immediately, I was drawn to him, and seemingly, him to me.

She told me that he was a two-year-old out of the great mare Packin Sassy, who scorched a trail in the barrel racing arena with the likes of legends such as Jim Berry and Troy Crumrine and was sired by the up and coming Stallion BHR Frenchies Socks. The owner/breeder (Kelly Carr) said to me, “He’s for sale. We thought we had him sold but they never came to pick him up.”

That’s when my wheels started to turn. Maybe he could be mine?

It was perfect timing for me to purchase this gelding, as I had just sold my last successful mount a few months prior. Call it kismet, but I truly feel like it was God who brought us together. Nothing else comes close to explaining our story.

Packin French Socks, also known as Joe, grew into everything I thought or hoped he might be. He showed on numerous occasions during his training that his talent had no ceiling. It was too good to be true, but he did have his quirks, which as with any good horse, you just learn to accept because of all the amazing things you get in return.

But let’s fast forward to 2014. This is where the real story and mystery merry-go-round begins.

We find ourselves at the International Barrel Racing Association (IBRA) Finals in Cloverdale, Indiana, where the year prior we finished 9th overall in the first division at our first National Finals competition. But this time was different. Instead of finding ourselves in the winners circle, we ended our trip at Rood and Riddle Equine Hospital.

The week started off with our first run resulting in a disqualification due to going off pattern. The way we did so was just an over-execution of  our turn at the first barrel, which does occasionally happen. I called it a whoops moment. The next run is a new day and we could try again.

We headed into the arena for our second run, but this time Joe completely ran past the first barrel without giving it a thought. He disregarded my cue to turn completely, very out of character for the likes of him. He has always been a horse who aimed to please, and that’s no exaggeration. After our run, the first thing I did was call my long-time veterinarian Dr. John Bennett of Equine Services LLC. He was just as alarmed as I was and recommended taking him to Dr. Hopper for a lameness evaluation.

The evaluation resulted in an MRI of the front feet where he seemed to be experiencing significant soreness. However, the MRI basically revealed nothing. No soft tissue damage and he was diagnosed with thin solar laminae (thin soles). The treatment was a change in farrier and time off.

So that’s what we did, and after some time off and this change he went back to his winning ways. However, to me he still just wasn’t quite right. He continued to receive the very best hoof care, even hauling back and forth from my home in Charlotte, TN to Lexington, KY to keep him on the right track. It was an inconvenience, but I was willing to do whatever it took.

Over time, I tried special diets, exercises, barefoot — you name it, I tried it. Yet still he was just weird. He had leaky gut, which we addressed, tested for EPM, PSSM, metabolic issues, Lyme, and the list goes on. One time we found he had a slight negative plantar angle in hind feet and addressed it — but again, it didn’t work or provide the results I was looking for. The more I searched the more I found, but yet I still really found nothing significant or fixed anything. All the while he continued to be very competitive, even at the highest levels.

Each season we would get to a point where I just felt like the wheels were about to fall off, but they never really did. Honestly, I kind of had a sixth sense that if I kept on that is where we would end up, which commonly does seem to happen in the performance horse world. 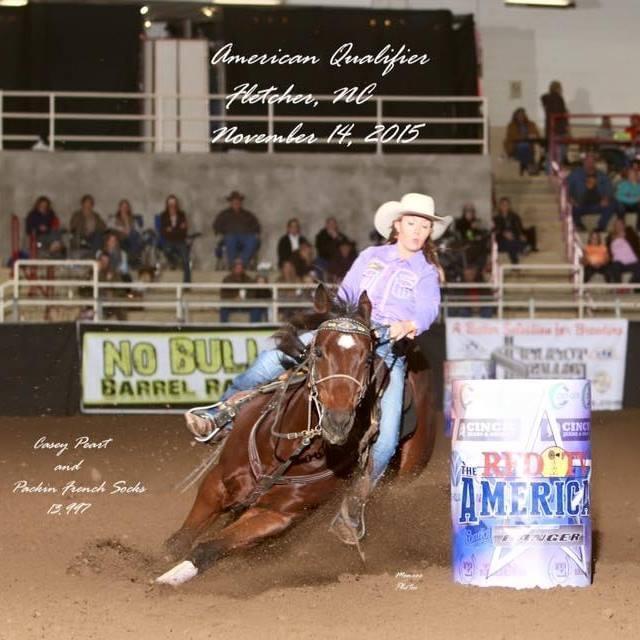 2015 rolled in and we had our best year together. We won the 1D by over two tenths in the Non-Member Race at the Better Barrel Races (BBR) World Finals in Oklahoma City, along with an American Qualification and the list goes on. Things were fantastic! But fall came and here there we went again — back on the merry-go-round. I found myself back at the vet’s office, knowing something just wasn’t quite right, but still I didn’t know what.

This time around we proceeded with a bone scan. It showed nothing significant, yet again, minimal uptake in a few areas but nothing that would cause concern. The slight uptake was in the front feet, lumbar and one hock. We investigated what we could, but we were left scratching our heads, and mainly it was me. No one else really ever noticed, but in all my life of being around all different types of performance horses and even hunters, I have never really come across a horse like Joe.

Maybe I did and just didn’t realize it because I was with them too early in their lives, or maybe I didn’t spend the time with them like I did with Joe. Either way, my heart kept saying keep looking, even though my bank account kept telling me to stop.

At that point I felt like and knew that everyone thought I was completely crazy — friends, family, probably even my vet (but at least he was understanding and maybe not as vocal about it as they all were). I think he believed me when I pleaded my case. He kept looking, too! I did have some good arguments, and when he didn’t know the answer, he always would consult or direct me to someone who possibly might.

A few years went by and I just managed. When I felt like things weren’t going in the direction I liked, I just would quit and then try again later.

In 2017 my husband and I found out that we were expecting our son Aiden. That left an extended period of time where I wasn’t riding. I thought surely if there is any sort of injury, by the time I started back it should have taken care of itself. Well, I was wrong, and this time when I started back in the spring of 2018, he was the worst he had been to date. Of course by this point, not only was I exhausted with a new baby, but also the stress of him coming back worse was even more overwhelming. I spent so many of my already sleepless nights searching online for clues that might possibly help my horse. Now not even retirement seemed like a viable option.

Finally, I just thought that I needed to get as many sets of eyes on this horse as I possibly could.