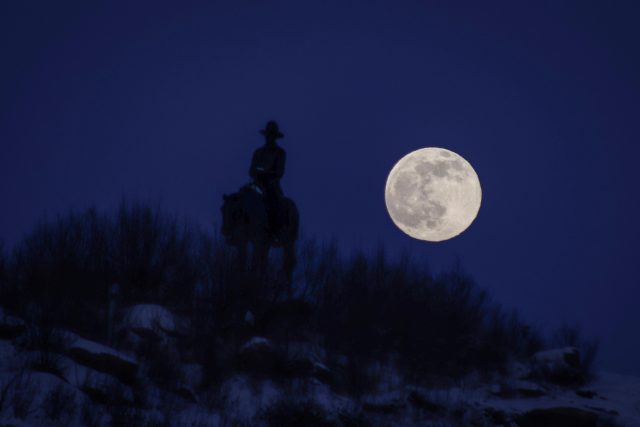 “All they did was make one wrong turn. One wrong turn on Halloween night. Kaydance recalled the line from the tale.” 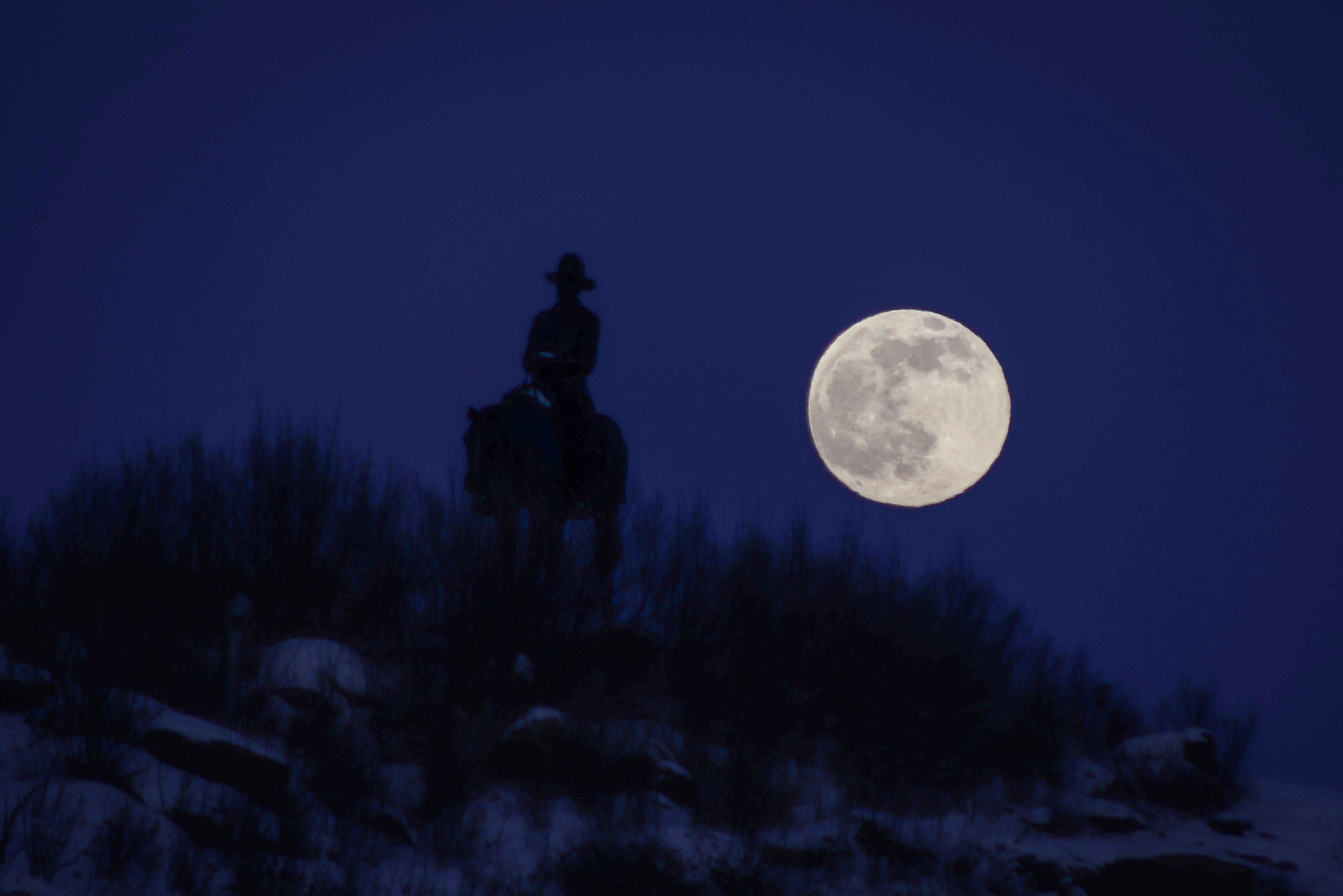 “Hey! I thought you said you knew these trails!” Kaydance shouted as she pulled back on the reins to stop her horse, Spud, realizing they were not going in the right direction.

“We must have taken a wrong turn somewhere,” Wynter responded as he quickly stopped his paint horse, Joker, to avoid bumping into Spud.

“We have to hurry; the sun is starting to set,” Kaydance said as she turned her Appaloosa around to face her older brother and his horse. “You know we can’t be out here in the dark.”

Wynter studied the trails that branched off the path they were on, but as the shadows grew in the setting sun everything was starting to look the same.

Kaydance was growing nervous. “Why don’t we backtrack?”

A quick moving shadow darted in between the trees alongside them, causing their horses to fly back in a panic before they could even question what it could be.

“Look, we have to get home. It’s starting,” Kaydance demanded, shifting herself back in the center of her western saddle.

“Oh please, you really believe in those childish stories,” Wynter mumbled to his little sister as he gathered back up his reins.

“KD, there is no such thing as the Night Rider. You know our parents just told us that story to keep us from riding at night.”

“And yet here we are…riding at night.”

“No, we’re not,” Wynter sternly said, starting to feel annoyed by Kaydance. “We’ll just have to backtrack till we find the right turn. Put Spud in the front.”

In a blink of an eye, another shadow rushed by them between the trees. Spud and Joker started to chomp at the bit and danced in place. Kaydance paused to look out into the trees, hoping for a logical answer, hoping that this was not the nightmare she grew up believing. Despite feeling Spud’s nervous energy below her, she pushed him forward past Joker to take the lead.

Kaydance and Wynter quickly rode the trail north, hoping to find something familiar, a marker that could offer them a clear path home. Kaydance gave Spud more reins, figuring he would want his dinner and find his own way home. Wynter gave Kaydance directions as the trails twisted and turned, but it was a maze; an entanglement of trees and it felt like they were riding deeper into the woods instead of out. Kaydance could not have imagined that they were that lost. All they did was make one wrong turn. One wrong turn on Halloween night. Kaydance recalled the line from the tale.

“One wrong turn on Halloween night,” Kaydance repeated out loud.

“Like in the story.” Kaydance turned back in the saddle to look at Wynter. “If you make one wrong turn on Halloween night, the trees will lead you astray.”

Kaydance stuck her tongue out at her stubborn brother before facing forward. Spud showed little excitement going in this direction and Kaydance knew that it meant that they were probably going farther away from the barn. Kaydance started to grow anxious, fearing that they would not be making it home in time.

Another snap of a twig followed by the rustling of a tree sent Spud jumping in fright. Kaydance, not expecting her horse’s sudden reaction, quickly reached for the horn of the saddle knowing that there was no other option but to stay on. No way was she going to lose Spud tonight.

Once she got Spud to calm down, Kaydance quickly turned to check on her brother but he wasn’t there. She checked left and right and behind, but her brown eyes were met with endless trees.

No Wynter. No Joker.

Kaydance’s breathing became shallow, her heart pounding in her chest. Her body shivered, despite the warm evening. Spud, picking up on Kaydance’s reaction, began to back up as if he were trying to leave the scary situation.

Kaydance scanned the trees over and over again. “Wynter! This is not funny.”

“I want to go home,” she cried out to no one but Spud. Kaydance reached into her pocket for her cell phone and turned it on but it was useless as it had no service. Kaydance didn’t know what to do or where to go.

Another shadow darted in between the trees, catching Kaydance’s eyes. It darted again before disappearing into the shadows.

“Wynter?” Kaydance questioned, still hoping it was her brother pulling a mean prank on her. She saw a black mass moving towards her and a wave of relief washed over her; it had to be Wynter riding back with a smirk on his face. He would laugh and tell her how much of a baby she was for believing in the Night Rider.

It had to be Wynter and Joker.

As the mass grew closer, Kaydance felt her stomach drop and all the heat leave her body. It was not Wynter and Joker. Kaydance should have kicked Spud on and galloped away but she was frozen in place. Spud perked his head up and gave a nicker to the oncoming horse, though Kaydance wished she could tell him that she didn’t think this was going to be a friendly meeting.

Emerging from the shadows was a great big black horse with ruby red eyes, the faceless rider cloaked in a long and billowing cape. The pair circled Kaydance and Spud in complete silence as if it were sizing them up. It seemed as if the world stood still.

And just like that, the Night Rider was gone, dematerializing into the night.

Kaydance gasped for air, as if she were holding her breath the entire time. She came to, out of whatever trance she was in, and tried to make sense of what she saw. The Night Rider was very much real, Wynter was gone and she was completely lost at night. She gave Spud a reassuring pat on his neck before studying the surrounding area for anything else creepy.

“Go home, Spud,” Kaydance whispered looking down at her horse. She dropped the reins and gave Spud all her trust to take them back to the barn. What other option did she have? She hoped she would find her brother and his horse along the way. Maybe Joker ran them home already and he was waiting in the barn for her.

Kaydance picked up her head and in between Spud’s ears was an older man dressed in a dark button-down shirt, ripped jeans and brown cowboy boots. His long grey hair was tied back under a cowboy hat. In normal circumstances, Kaydance would never talk to a stranger, especially while alone, but his smile seemed kind and she was desperate for any help she could get.

“Yeah, um… I’m looking for Pennington Acres. Do you know where that is?

“You know the farm?”

“Could you point me in the right direction?”

“How about I walk with you? Don’t like the idea of sending a young girl and her horse alone into the woods at night.”

“Nice to meet you, Elmer. I’m Kaydance and this is Spud.”

“Funny name for a horse.”

Kaydance followed Elmer through the trees as the stars twinkled bright above them. It was almost peaceful, and she could practically pretend she never met the Night Rider. She had faith that Wynter and Joker made their own way back. She couldn’t wait to call him chicken for leaving when things got scary. Much to her surprise, it was an easy path to follow and it almost felt like the woods were releasing her from its hold. Underneath her, Spud started to pick up the pace and Kaydance couldn’t be happier; they were almost home, she could feel it and so could Spud.

At the end of the trail, she saw a horse and rider.

“Is that your brother and his horse,” Elmer asked. So excited to finally see Wynter and Joker, Kaydance didn’t even wonder how Elmer knew.

Kaydance asked Spud for a trot to catch up with her brother who was waiting on the main road, “You wouldn’t believe it! I saw him! The Night Rider! And we were so lost but then Elmer showed up and led me to you.”

“Who?” Wynter asked looking past Kaydance and Spud, expecting to see someone.

“Elmer,” Kaydance started to say while looking behind her, “he’s right-”

“…Yeah.” Kaydance looked back behind her, hoping to thank the man who saved her, but Elmer was nowhere to be seen.

Kaydance and Wynter followed the main road the rest of the way home in silence. No one really knew what happened in the woods that Halloween night, but it was strange for sure. Kaydance didn’t think anyone would believe them either. They reached home and took the horses into the barn to be untacked and fed a much-earned dinner. Kaydance and Wynter finished up in the barn and started to take the path up to the house but something still didn’t sit right with Kaydance.

Once she reached the old wrought iron fence she hopped off and led Wilbur through the gates of the cemetery. Kaydance walked in between the headstones, lighting up each name with her phone’s flashlight, until she found what she was looking for. Kaydance kneeled before Elmer Pennington’s headstone; she knew his face looked familiar in the woods. He was the original owner of Pennington Acres, established in the 1800s and a relative of her family. His picture was one of many along the wall in the office.

Kaydance placed a hand on the cold headstone, “Thank you Elmer for bringing me home.”

She stood up and on the other side of the fence her eyes met a translucent horse and rider, but she wasn’t afraid. Instead Kaydance felt peace, the same peace she felt following Elmer through the woods. Elmer, sitting on a big quarter horse dressed in his button down and jeans, tipped his cowboy hat before riding off. Kaydance, feeling a little more satisfied for piecing together at least one of the mysteries on Halloween night, mounted Wilbur and rode him back to the barn.