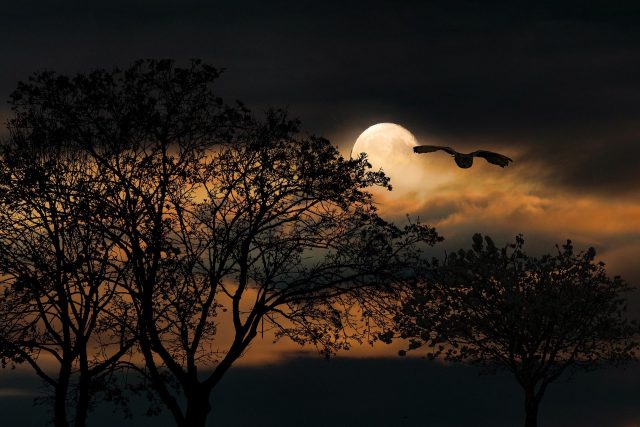 October 27, 2020DeAnn SloanReader Submission#HALLOWEENComments Off on Halloween Short Story: Ears in the Moonlight

“I was jolted awake by an unknown noise….was it a scream? I caught the sound of frightened human footsteps. It sounded like children. I was still standing near the fence when I saw shadows running from the neighborhood. They were heading this way at a fast run.” 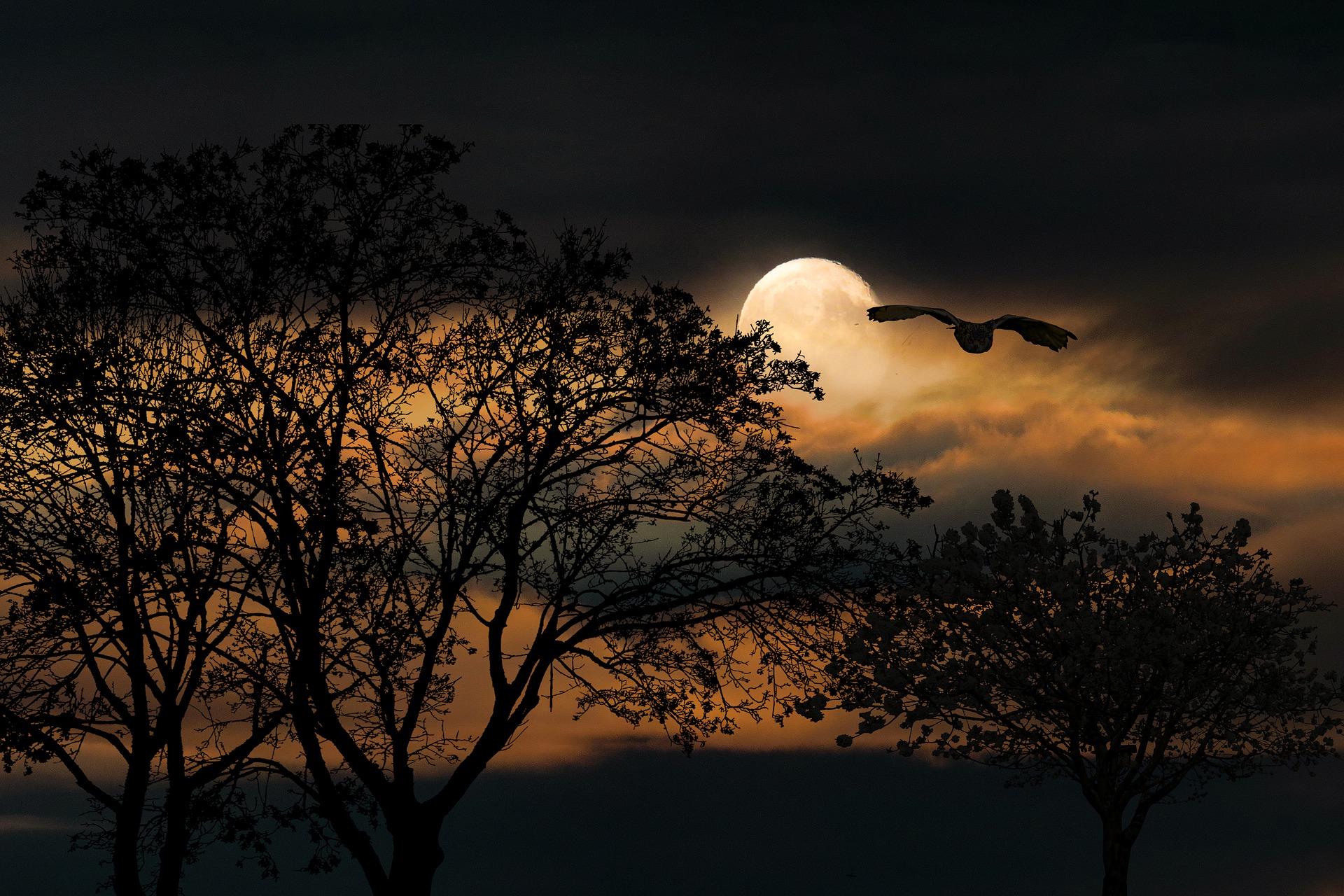 The sun was setting and the wind tickled the leaves into little currents above the ground. I was cleaning up the last of the hay, when I heard noises in the distance. It was children laughing as they walked. I spotted them walking down the road that bordered the far side of the pasture. They were from the subdivision next door. They weren’t going to the school bus stop this late, so why were they all out? I made my way towards them across the pasture, pretending to not really be interested. The pony was there already, shamelessly begging, as usual. As I got closer, I saw that the children weren’t dressed like usual. The quiet tennis shoes and jeans were replaced with flapping cloaks and even masks. Some had helmets, but not the ones used for riding. They carried bags or containers and some had sticks that lit up. Their energy was high and I could feel their excitement. They were heading for another neighborhood. Parents were nearby, some holding their children’s hands, while others were walking in groups together.

I went as close as I dared to the fence. Their smells were strange. I detected a mixture of new clothes, plastic, and sugar. I like sugar. I drew close enough to receive treats. A little one yelled, “Hi donkey!” I knew that little guy. That sweet boy shared his carrot sticks with me on his way home from the bus stop. He told me not to tell his mommy that he didn’t finish them. Even if I could talk, I wouldn’t betray him. His older brother, Jay, smiled and reached up to rub my forehead. Nice kids. The brother was about ten and was with two other kids, walking fast and talking excitedly. Those kids regularly joked and cavorted at the bus stop, but they always had time to give me an affectionate scratch.

My own family was making their way down the driveway with little Sean wearing some sort of furry clothing. His mom, Rosa, was pushing his stroller. I wuffled and squeaked in their direction as a quiet greeting. Sean laughed as his parents beamed at me. They’re a good family. We always have full tummies and good care. They teased me mildly about my quiet bray. It wasn’t that I didn’t know how. It was just that I never felt the need to announce my location. I brayed in the wild whenever I wanted to find my herd, but I’ve never made a noise louder than a squeak since I was captured by the BLM. That’s how I earned the name Squeak.

Once the children moved on, the pony and I were alone as the sky darkened. The old mare wandered over to see if I left anything behind in the hay feeder (I didn’t), then, she and the pony headed for the shelter. I stayed in the shade of an enormous oak tree, just inside the fence line. My grey color blended perfectly with the blue shadows of the tree. Soon, I heard my human family return with little Sean. He was sound asleep and his little plastic container was half full of sugary smells. I drew my breath in and out through my nose in a quiet greeting as they passed. No squeaking, lest I wake the sleeping baby.

Jay’s little brother and his family passed by not long afterwards. He was also sound asleep and being carried by his dad. My back twitched a little. I liked carrying the neighborhood children around. Their wiggly, warm, bodies emanated pure joy from my back. My family often invited other children in the neighborhood to visit with Sean and I gave them little rides. The air was still and I was too comfy to stir. I locked my right hind leg and cocked my left hind leg up as my head dropped in relaxation.

I was contemplating a nap as the moon rose, bright and full behind the house. In the distance, I could hear loud shrieks and recorded voices coming from the neighborhood. It was far enough away to allow us to sleep. I drifted off in the moonlight; dreaming of my desert home and the burro herd that was broken up when we were all captured. The smell of sagebrush in my nose and hardpan beneath my hooves….

I was jolted awake by an unknown noise….was it a scream? I caught the sound of frightened human footsteps. It sounded like children. I was still standing near the fence when I saw shadows running from the neighborhood. They were heading this way at a fast run. Their lighted sticks bounced along in time with their steps. It was Jay and his friends. Bigger shapes were behind them. The smell of fear and malice mixed as they headed my way. Jay looked right at me and jumped my pasture fence. His friends followed. Unfortunately, so did their pursuers, who looked like teens. Jay and the others stopped on the other side of my tree. I froze, relieved to be hidden out of sight. They were pleading with the big kids to leave them alone. The teens easily leaped the fence and I heard the sound of punching.

Someone fell with a slumping noise. It was Jay. He had fallen sideways and I could see the back of his head from my side of the tree. His unseen bullies made threatening noises towards the other kids. They were crying. I’m not excessively brave by nature, but this was too much. I peeked around the other side of the tree. I saw the outline of three large teens standing over Jay’s form. One kid was crying and the other was kneeling down and talking to Jay. I’m not brave by nature, but these kids were part of my extended herd of sorts. And the other kids were too big and mean. Like predators. I stepped silently behind the fiercest human beast, opened my mouth, and mustered up a canyon shaking, bird spooking, dust rising, BRAY that seemed to echo through the green hills of my new home. The teen boys scrambled over each other and the fence. One tore open his clothes on the strand of barbed wire on the top. They fled like scared mule deer up the road.

After a brief, shocked pause, Jay started laughing. He had some swelling and blood on his lip, but he was still laughing. His friends joined in and they took turns rubbing my shoulders and neck while laughing about the fleeing bullies.

The next day, I was standing near the bus stop when I heard a teen girl telling her friends a ‘ghost story’. She said she heard it from her boyfriend. “One night, during a full moon, an unearthly noise roared behind the unsuspecting kids. They could feel its breath, like the heat from Hades, warm on the back of their necks. Its huge snout and dark eyes staring into their very souls. It was a banshee!  A messenger from the dead coming to claim another victim! That’s right, we have banshees right here in our town. I’m serious! It happened to my boyfriend last night, on Halloween!”