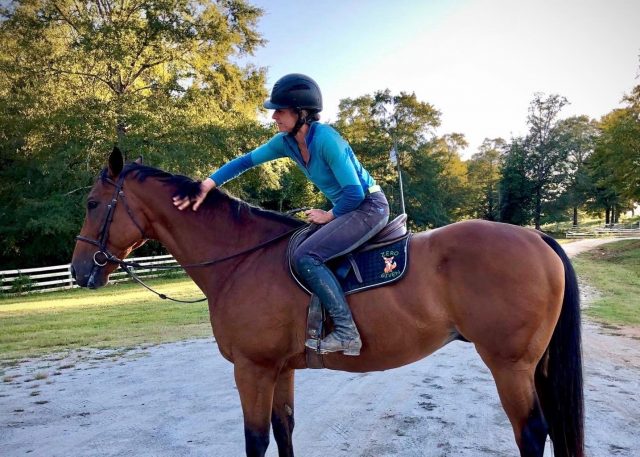 “This whole stall rest thing is tough on everyone. It is hard to wait. And it is hard, when progress starts to show, to not go running off the rails.”

Following the announcement that the Retired Racehorse Project‘s 2020 Thoroughbred Makeover and National Symposium, presented by Thoroughbred Charities of America, will be postponed to 2021, competitors have been working to decide what comes next for them and their mounts. Today, blogger Aubrey Graham discusses the progress of her horses and negotiating the slow work that comes with it.

Boomer is out of his stall!

About three weeks ago, Boomer (JC Vanderboom Ridge) got the go ahead to tack walk. The lesion in his suspensory hasn’t completely disappeared, but it is healing well and he gets to go (slowly) back to work. And walking up and down my driveway with me in the irons is exactly that – slow work. Now more than ever, this giant, still-muscled-up-despite-stall-rest (HOW?!?!) horse becomes the beacon of hope and patience. His potential positive outcome sits in contrast to Juice’s (JC Pulpituity) current situation and the harsh reality that nothing in life, horses, or ligaments is ever guaranteed. 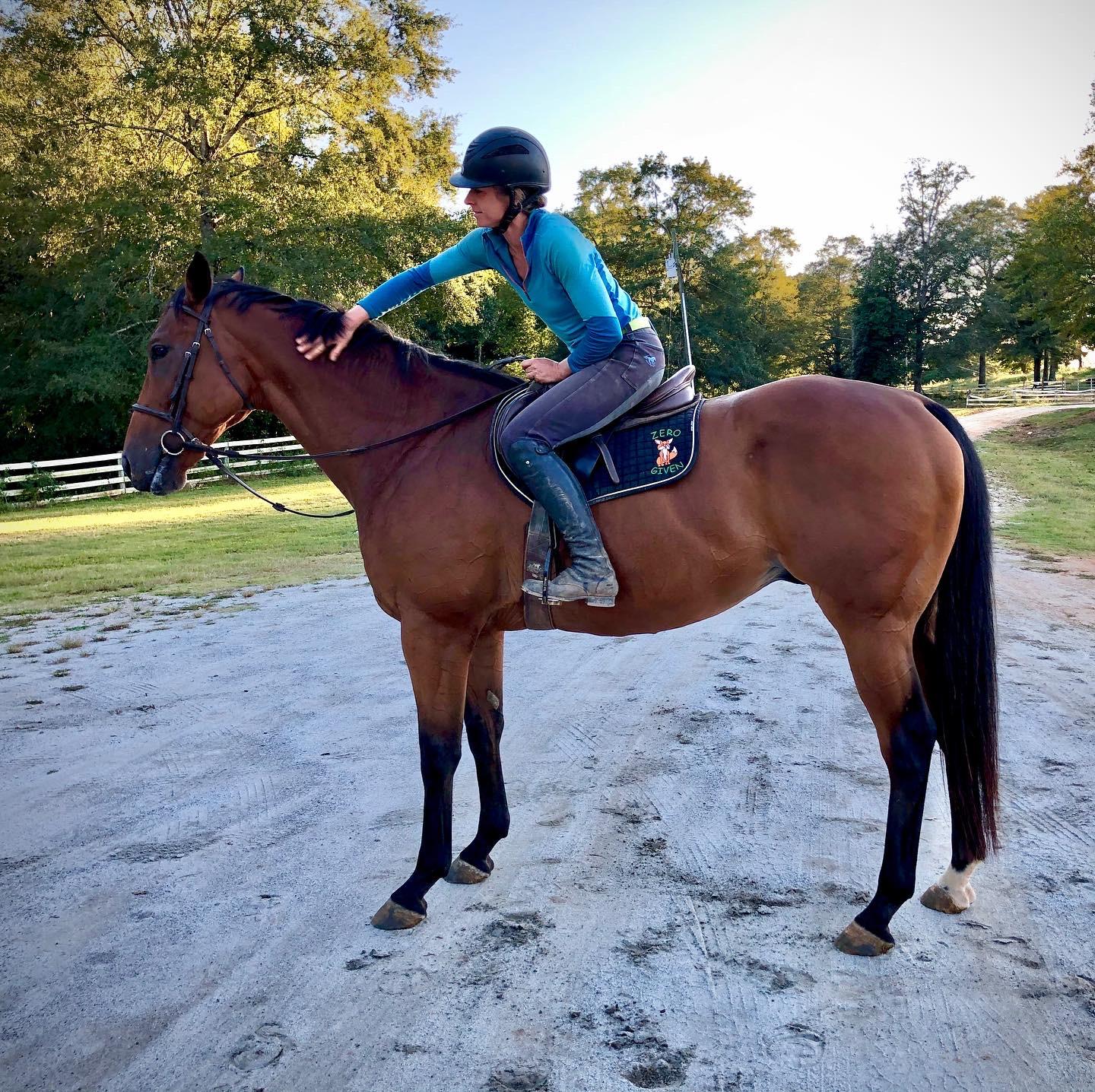 Boomer is out of his stall for tack walks! Photo by Amanda Woomer.

Getting back on Boomer for the first time in six months was exciting – and mildly daunting (especially considering Juice’s acrobatics). My driveway is hard packed gravel and M10 rock dust. It would not feel great to meet it at speed and from 17.1 hands of height. Boomer is usually a pretty cool cucumber, but he’s also wickedly athletic and catty, so I don’t discount the potential of explosions or unplanned dismounts. 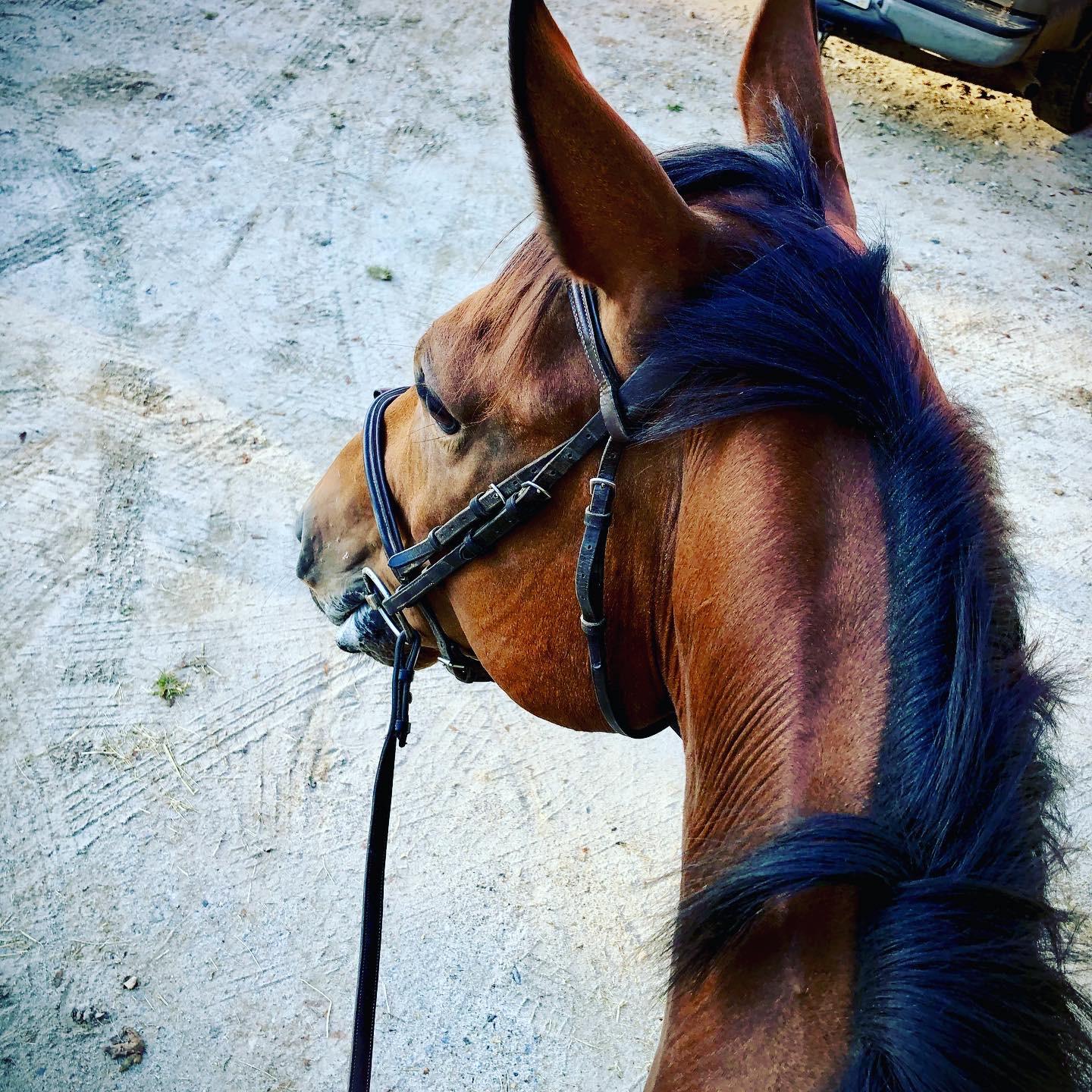 So happy to have this view back. Photo by Aubrey Graham.

Amanda Woomer, my friend and on-paper twin (also loves horses, has a PhD, functions as an anthropologist, worked in the Congo, and is a damn good photographer), was at the right place at the right time. She hopped on the saintly Irish Draught, Lizzie (owned by Janeen Pasquill) and the pair acted as Boomer’s (and my) support team for the day. Boomer had company for the walk and I benefited from good conversation, insight and, of course, cheese dip later on. The ride was entirely, anticlimactically uneventful. 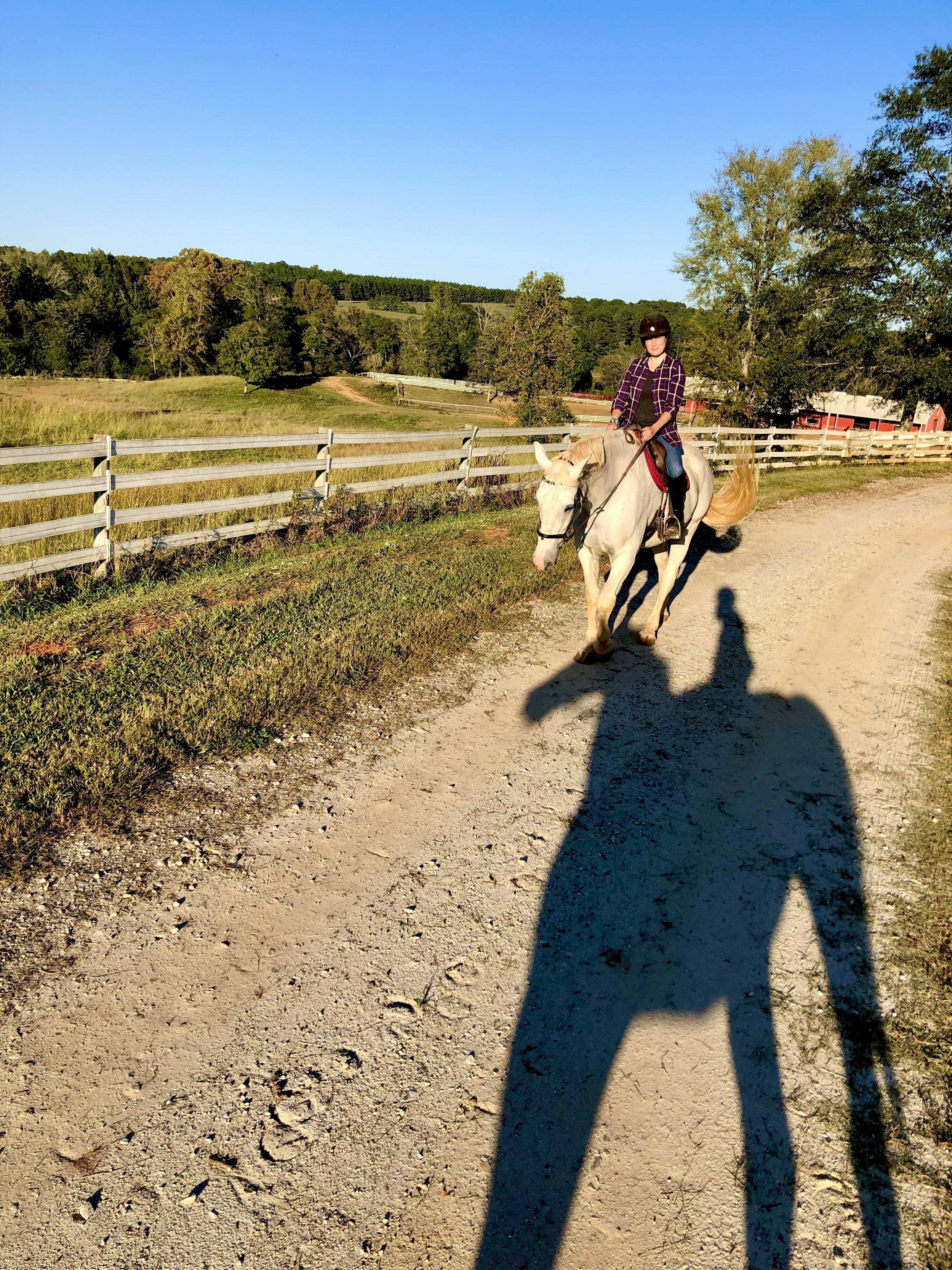 Amanda and Lizzie babysit Boomer and me on the first ride after six months in a stall. Photo by Aubrey Graham.

Since then, Boomer and I have been out for walks up and down the driveway four to five times a week. I switch up the playlist, and he keeps me on my toes. As seems to be the case for so many things, there are good, easy days and there are anxious, hot-mess days. Sometimes, the anxiety is just him raging about getting out of his stall – this is evidenced by his adamant stall digging and occasional skittering bucks under saddle. 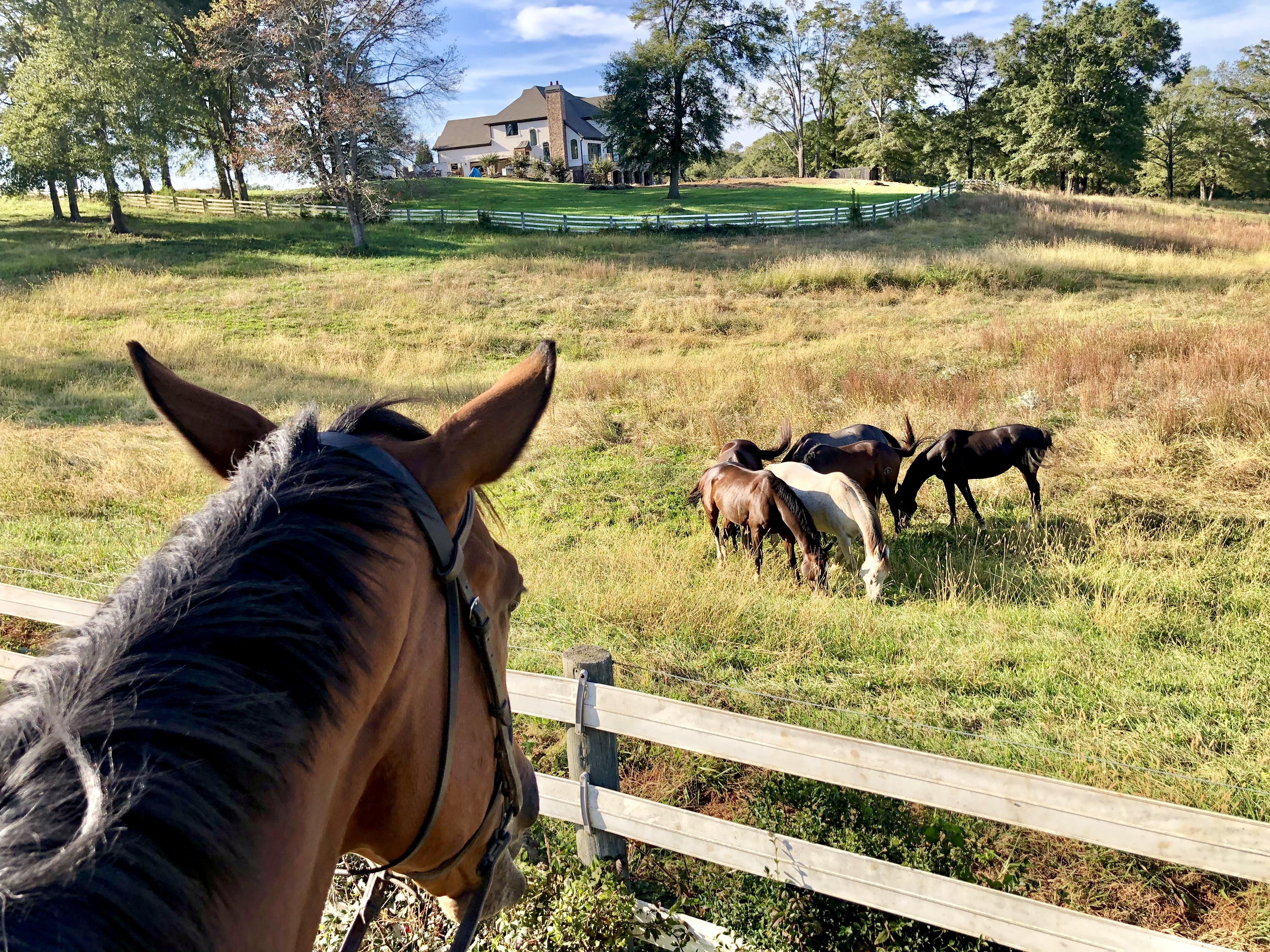 Boomer scopes out his (still distant future) herd in the big field. Photo by Aubrey Graham.

Sometimes, however, his “bad” behavior is entirely my fault. About two weeks ago, my landlord had piled small packages for the barn on top of a fence post near the driveway gate. Thinking that a little pony-express action was a great way to mix up the slow work, I side-passed Boomer next to the packages, and picked them up. This was fine until one rattled and he decided the supplements inside were deadly and careened around the driveway, bronc bucking, spinning, and leaping. By the time I hauled him up, packages were spread to the far right and left of the road and I was laughing. Committing myself to more ground-work with things that rattle, the two of us passaged and jigged back down the road, package-less. 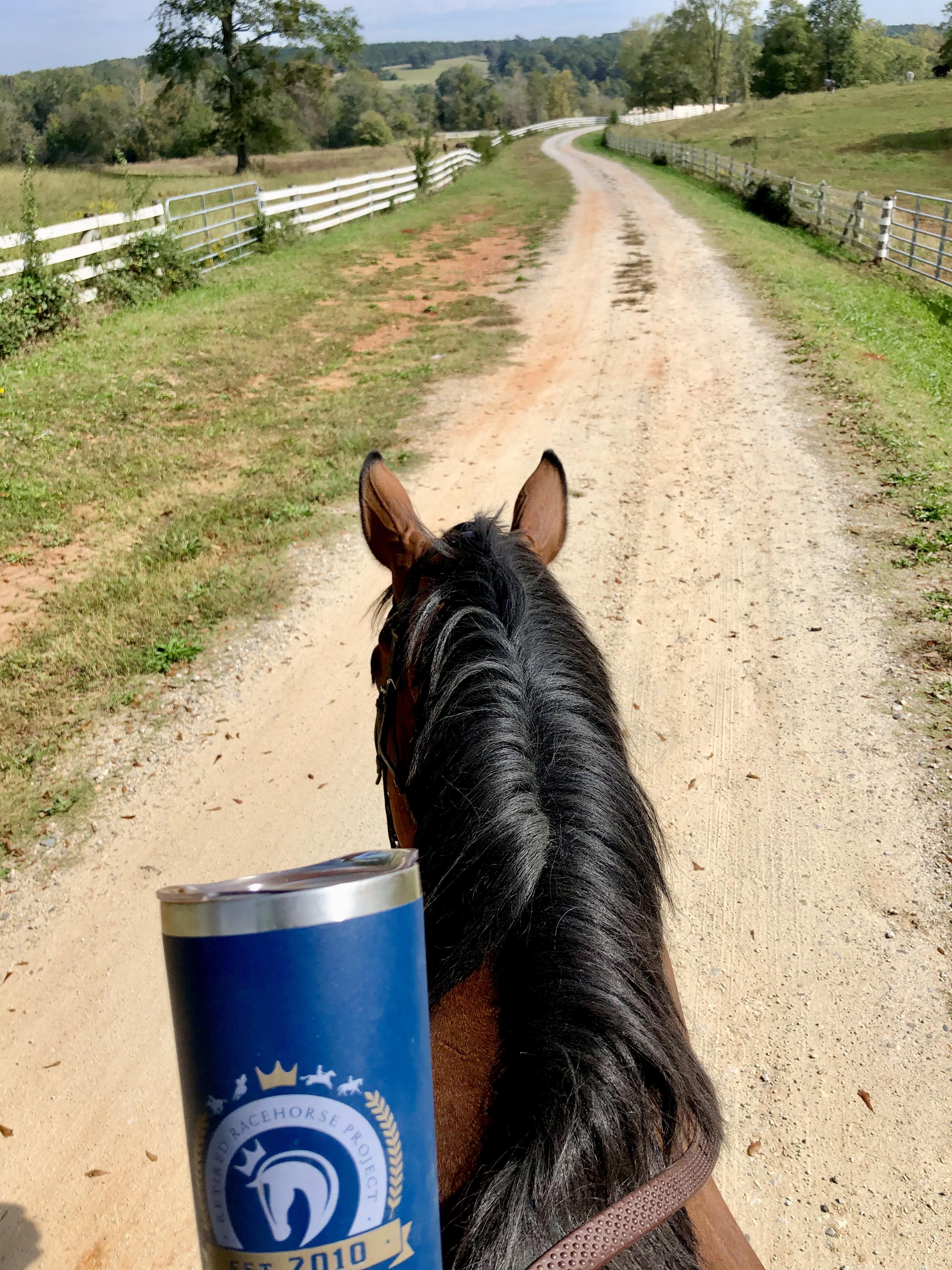 At least Boomer doesn’t mind if I carry coffee on the walks. Photo by Aubrey Graham.

This whole stall rest thing is tough on everyone. It is hard to wait. And it is hard, when progress starts to show, to not go running off the rails. I probably have written this in each blog – but patience and going slow is not my forte. I can go forward, I can run for days, I can expedite, find efficient ways across, over, under, or through, but dammit, waiting it out is hard.

So, I force myself to stay at the walk… stay on the driveway where the ground is hard and his ligaments can regain their strength without the stress of the arena sand. And I cautiously look forward to a next positive checkup and the vet-determined permission to go more forward literally and figuratively. Until then… more patience, more stall time, and more slow, incremental work. 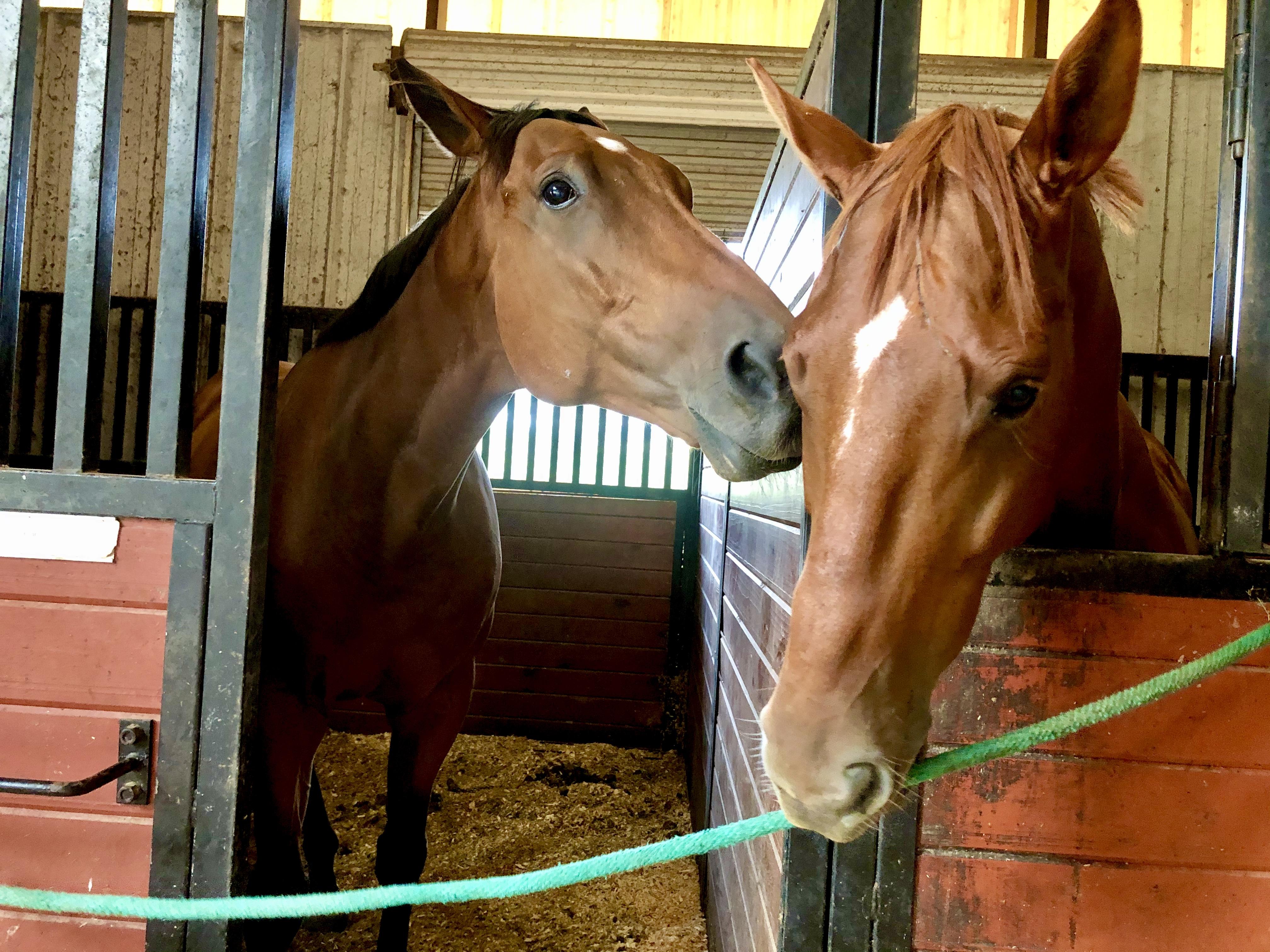 At least Boomer has Forrest to mess with while inside. Photo by Aubrey Graham.

But I still worry. Because the same day that Boomer was ultrasounded, so was Juice (JC Pulpituity). Juice is as sound as he ever has been, moving out well and no longer testing my stick-ability under saddle. I had hopes for getting his career back into motion – small jumps first, then eventually back to beginner-novice, novice, and then the moon.

Hope can be a tough mistress though – necessary, wonderful, devastating. 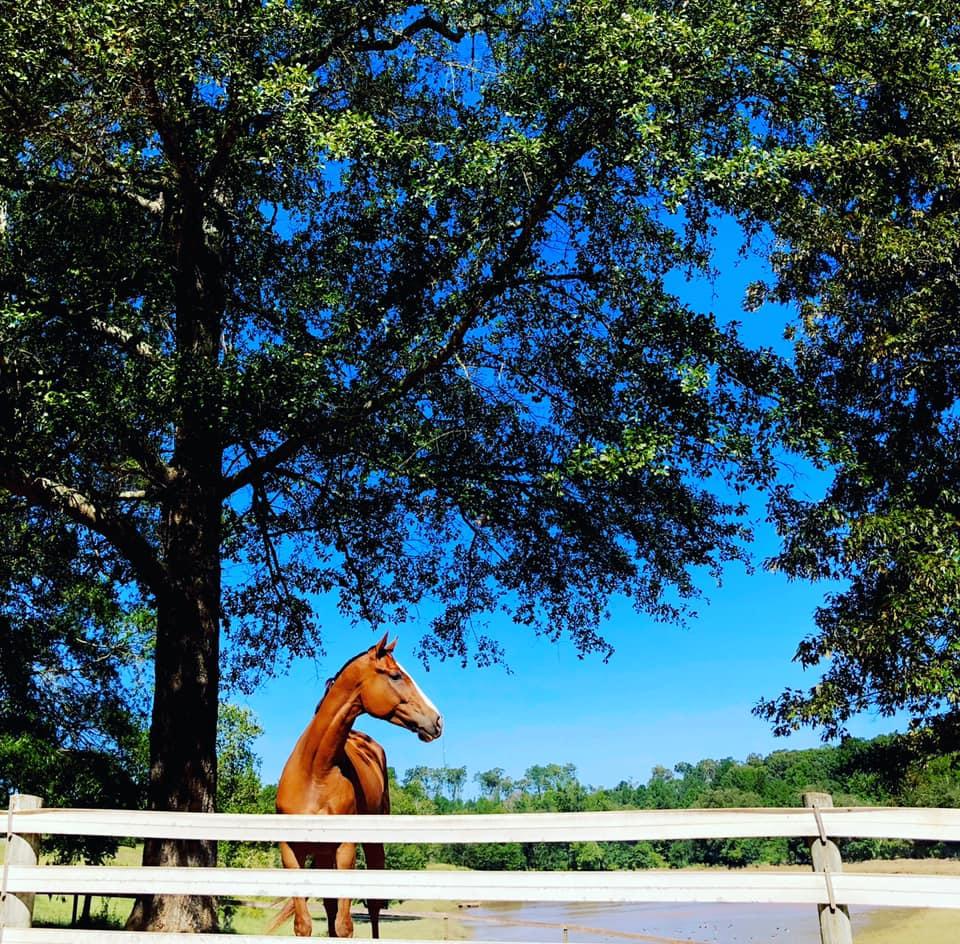 At least Juice is handsome. Photo by Aubrey Graham.

Juice’s jog and ultrasound ended with my vet asking, “how much do you love this horse?” It was his way of discouraging spending more money to fix what isn’t fixable. His ultrasounds are better than where we started, but he’s still not right. And while I’m willing to do everything to rebuild this horse piece by piece, his being “not right” is just something that I’m going to have to accept.

To imagine a mid-to-upper level career for Juice would destroy him. Sure, there’s hope that he’ll finish growing (he’s already 17.2), heal with time, and be fine. Sure, you can’t ride an ultrasound. But taking the risk to run a big cross-country track on a known injury is not fair. Frankly, the horse doesn’t care if he is running around Intermediate or if he is getting groomed to go hack out in the woods. Partnerships can and often have to shift. I find it hard. He doesn’t know any different. 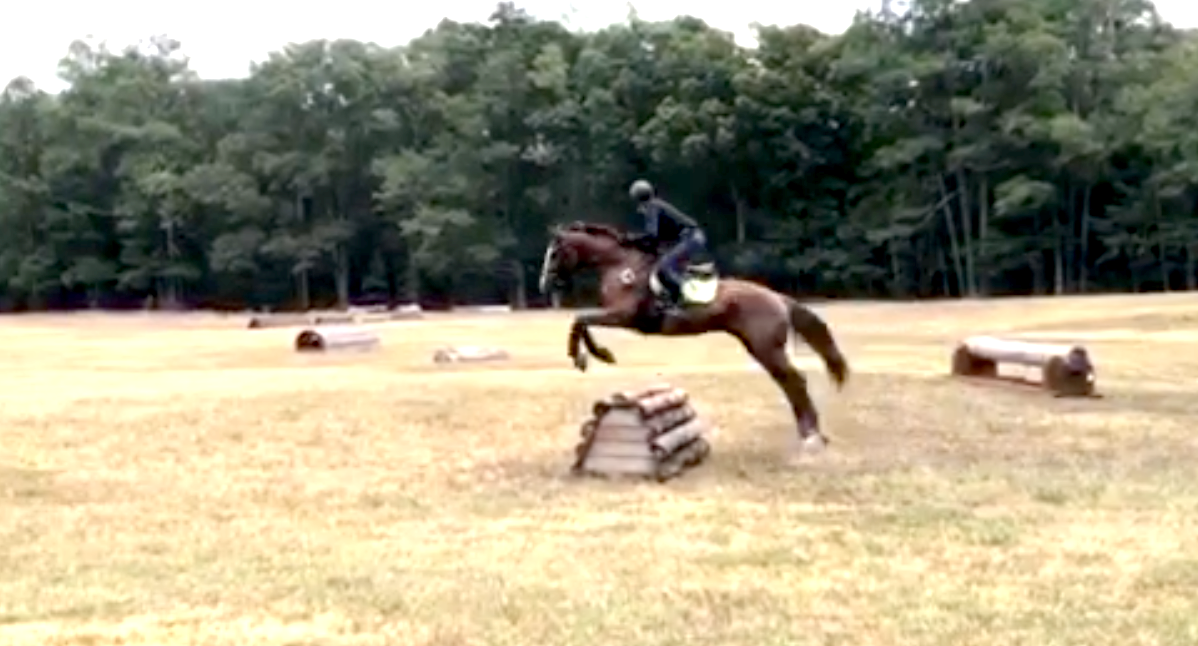 Juice easily pops over a Novice fence at the Lucinda Green Clinic at Ashland Farms back in October of 2019. Photo by Holly Breaux.

Sidelining emotional responses, I am trying to look at this dispassionately, rationally, or something like that. Lease him out? List him for sale? Keep him and dressage/hack out/teach lessons on him? He’s way too nice to be a pasture ornament. He can still do lower level work. Physically, should be able to do dressage. Who knows, maybe his brain can hold it together to get decent scores? For the next while (because I just don’t want to deal with the disappointing reality right now), I intend to kick that can down the road. 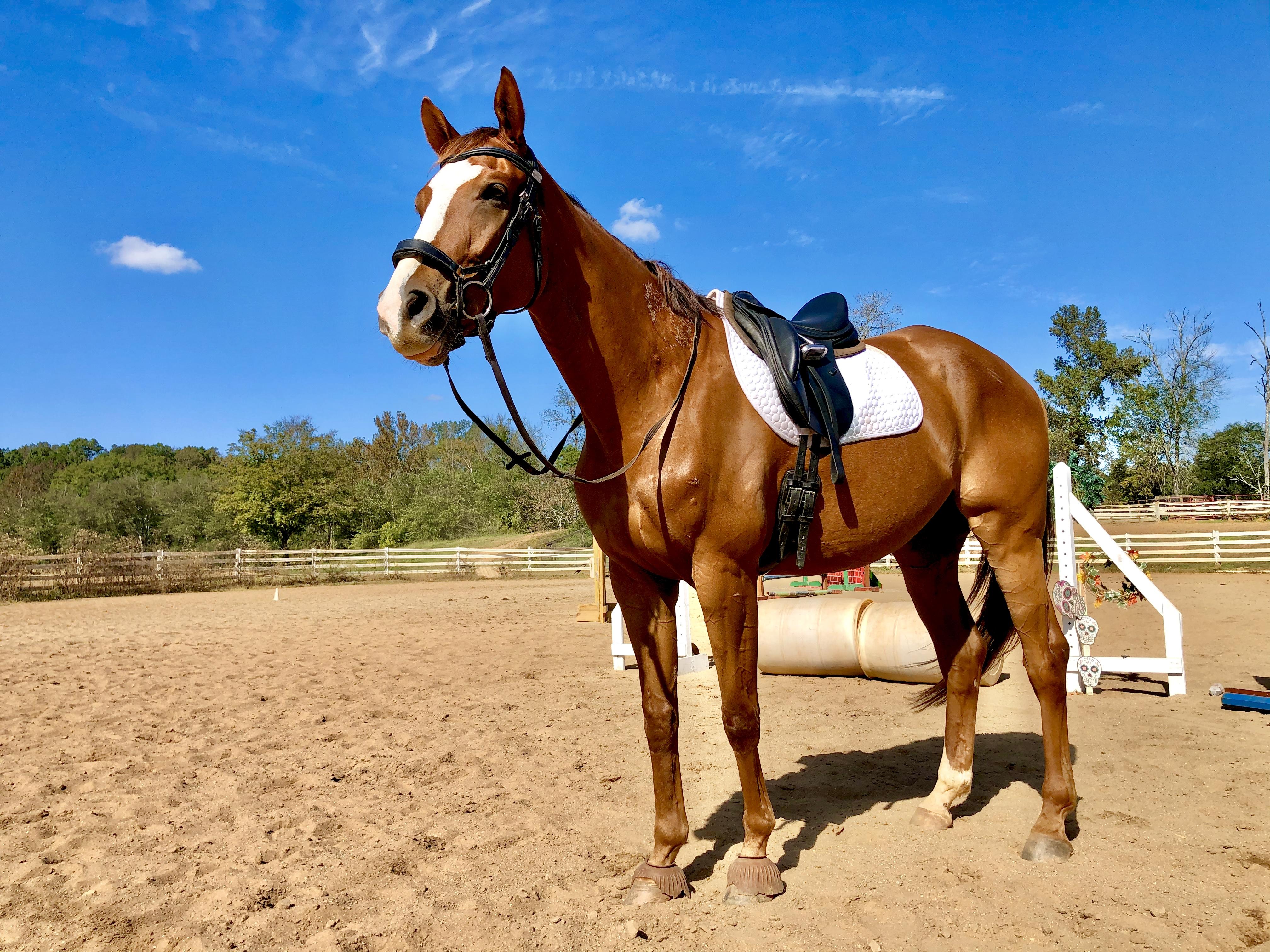 In the meantime, Juice is going to have to learn this whole sand dancing thing. Photo by Aubrey Graham.

So, while Boomer is out of the stall (kinda) and Juice is transitioning to another career, I still hold onto cautious hope. Going forward, l keep pulling from that same well that allows me to perhaps foolishly trust that by kicking on and putting one foot in front of the other (literally) up the hill, I can use the ‘now’ to build the potential of a ‘later.’ Looking at this from where I stood this time last year, both the ‘now’s’ and ‘later’s’ look pretty different than expected for Juice and for Boomer (and hell, for me too). Yet, can-kicking, stall resting, and slowing working aside, there’s undeniably still hope. And for Boomer, there’s still a RRP MegaMakeover to run. So, onward and forward… just, slowly.