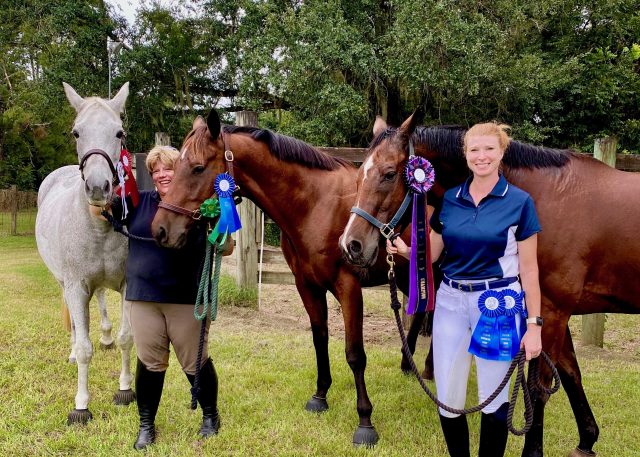 “I’m now a middle-aged, frumpy, gimpy, not-very-good, rider. What am I even thinking??! A sensible person would have quit already.” Libby and Spider head to their first show.

Following the announcement that the Retired Racehorse Project‘s 2020 Thoroughbred Makeover and National Symposium, presented by Thoroughbred Charities of America, will be postponed to 2021, competitors have been working to decide what comes next for them and their mounts. Today, blogger Libby Henderson talks about widening her comfort zone and taking Spider to his first show.

Everyone survives, and our comfort zone grows a little bit larger.

One of the phrases you see all the time on the Thoroughbred Makeover Facebook Group is to stay in your own lane. Experienced trainers guide the newbies on their journey and remind us that everyone is on a different path, some moving faster or slower than others. This past week we should have all been in Kentucky, performing at the Makeover. And yet, here I am, thrilled to have taken him to his first show to do walk/trot dressage.

I’m refusing to focus on how far it feels that we are behind, however, and in the spirit of staying in, and celebrating, our own lane, I’ll tell you all about it!

You know what “they” say about best laid plans? Apparently, I am proof of that cliché. When I chose the show as a goal, it was right after the rescheduling of the Makeover, and I had a nice big block of time to get ready. Also, because I have no sense at all, I decided that I needed to show both Spider and my mare, who hasn’t been to a show for more than five years. As I said in my first blog post, I am a special kind of stupid.

The week prior to the show, Hurricane Sally arrived to our West, and sent us torrential rains. Neither horse got ridden during the week. On Wednesday, when I went out to check on Spider and his pasture buddy, Taz, they had only a tiny island of dry ground in their whole field. 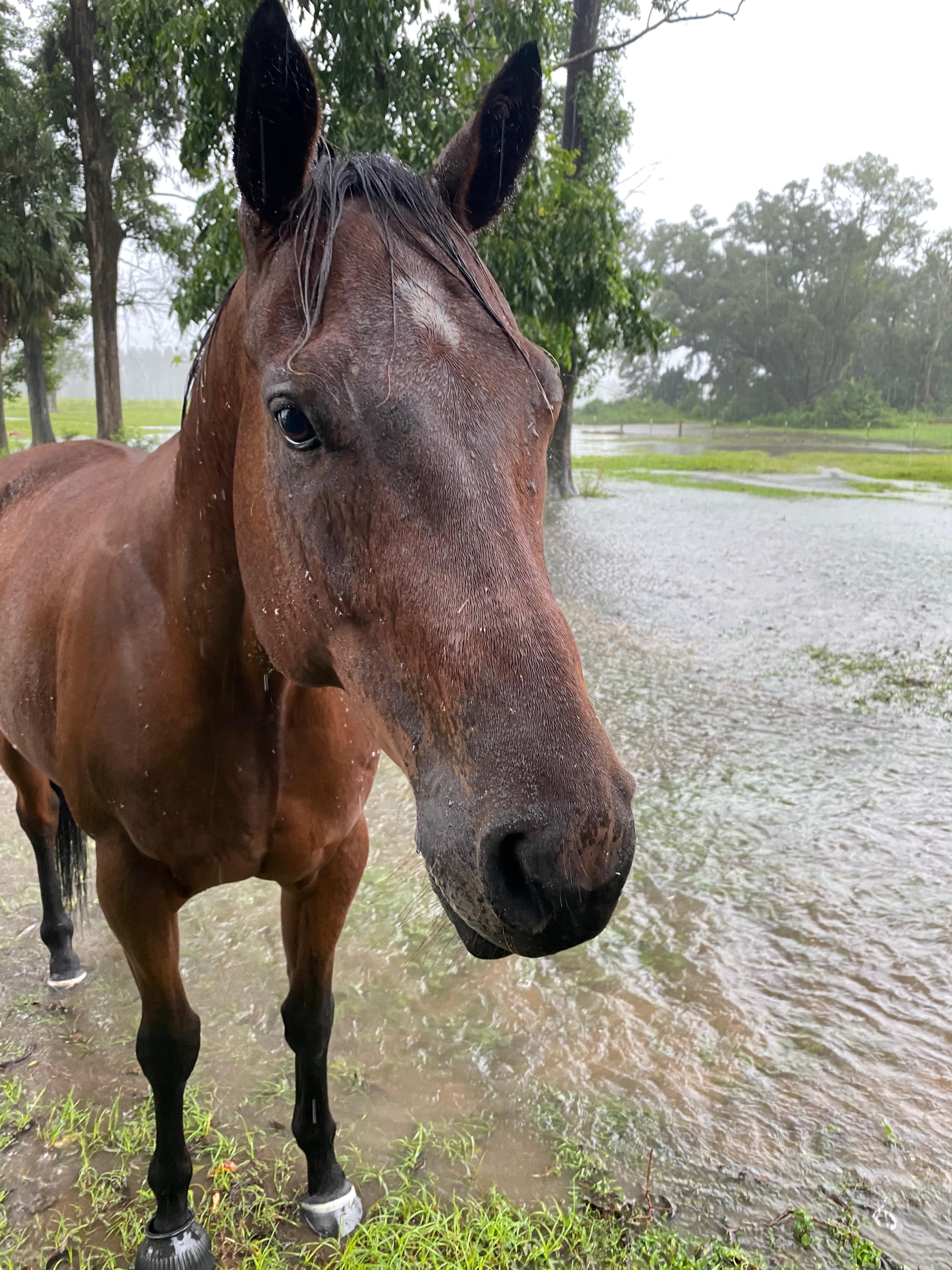 Spider in the middle of the flooded pasture. Photo by Libby Hendersonl

In consultation with Team Spider, (in this case, my trainer, Kelley Norred and my friend Kristina Littlejohn who has helped me with every aspect of getting him started) we decided to take him to the show grounds on Friday, so that I could school in the dressage arena the day before the show. The last time we’d been there to school, I didn’t ride him myself at all, and this seemed like a Very Good Idea. Until my husband decided that my truck had to go to the shop the day before, and we were left with no way to get there. Well, I thought I’d at least have a lot of time at home on Friday, since I’d taken the day off, to get ready. It would be just a matter of hooking up to the neatly organized and loaded trailer and we’d be off, bright and early Saturday morning.

Why do I never remember that with a grey horse, and no nice barn with a stall in it that she has to be bathed the morning of any show, and cannot be allowed to be turned back out?! I didn’t get nearly as much done on Friday as I had hoped I would – no one who knows me can possibly be surprised.

The morning of the show, I got both horses bathed and ready. Spider is sometimes a little sticky to load, but my Dear Husband is usually around to encourage him to jump in. But, on the day of the first show in years, he had to leave on an errand before I was even ready to load. This is when I start to wonder if the Universe is trying to tell me that I should just stay home. I mean, I’m now a middle-aged, frumpy, gimpy, not-very-good, rider. What am I even thinking??! A sensible person would have quit already.

I’m not sensible and I have a special kind of stupid reputation to uphold. So, off we went! The show was at a local event facility about 30 minutes from home, and they had kindly reserved us day stalls, so I didn’t have to try to wrangle two horses at the trailer with no one to watch the one left behind.

Thank goodness for all the help from Team Spider! Kelley saw that I got my mare ready, in the ring, and done with her two tests. It wasn’t great, we did only Intro dressage tests, again, but it was better than nothing. I would have preferred, however, that she hadn’t pulled a shoe while trotting around the arena, especially since she had only been reset the week before.

Spider was quiet and ready for his big debut. He was good on the lunge line (never hurts to be sure!) and I wasn’t worried when I first got on. I should have been. So many horses moving in all directions, and the jumping warm-up was right next to the dressage warm-up. Spider decided that he didn’t need me or my directions. I headed to the second warm-up, next to the actual arena, where Kristina was riding her horse. Bless her heart, she came out of the arena, saw my face, and hopped down from Sammy, got on Spider, warmed him up, learned the Intro A test on the fly, and went in and won the class!

He was good, and settled after his first test with Kristina. I was ready to get back on and do the Intro B test. I was thrilled to have survived, and to be honest, absolutely delighted to have ridden him myself for the one test. This is such a Team effort. Without Kelley coaching (and grooming!), and Kristina catch riding, I would never have survived the day! 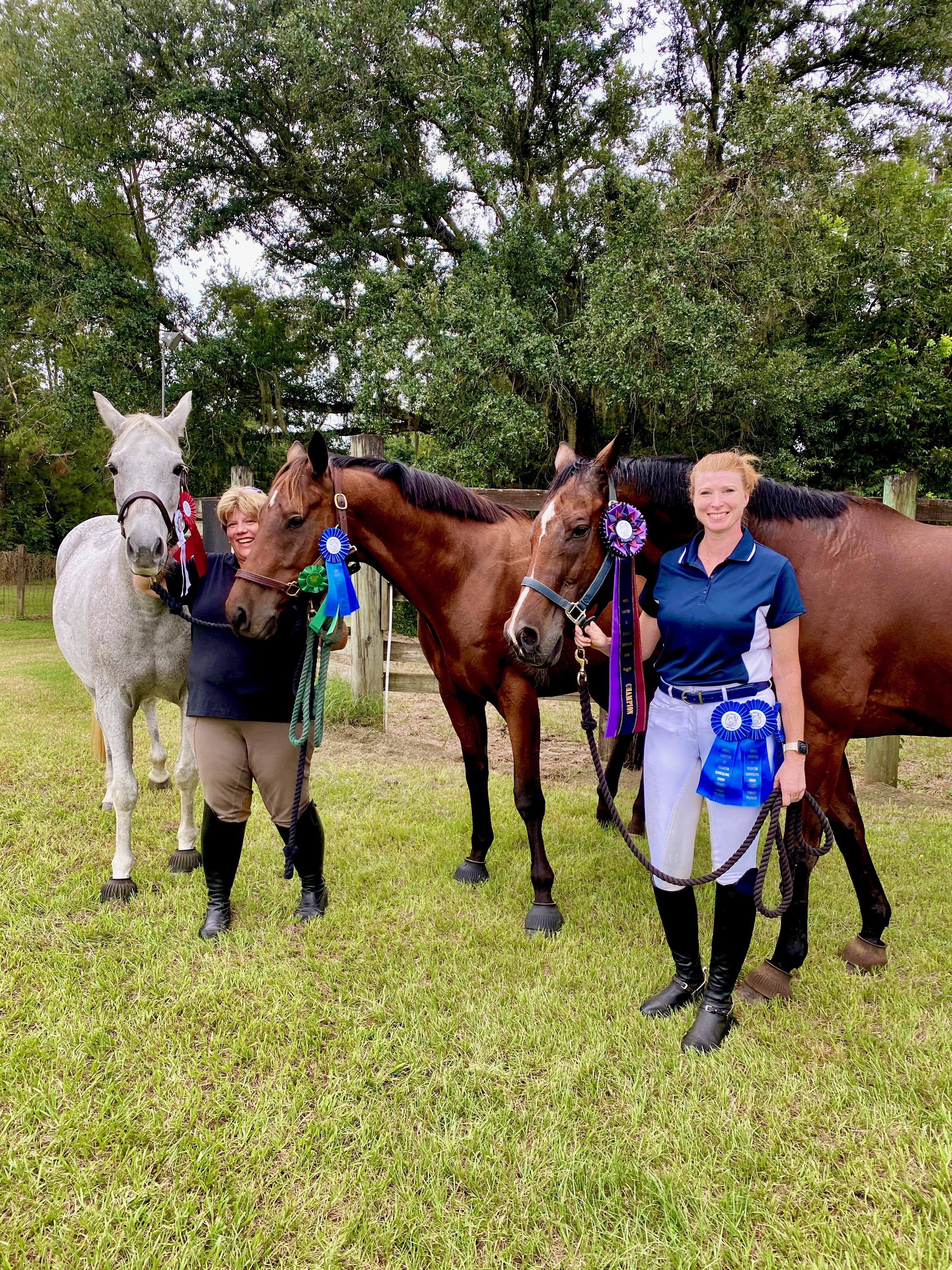 Me with Razzy and Spider, and Kristina Littlejohn with Sammy. Photo by Kelley Norred.

He’s had some time off since the show, as we’ve been battling skin funk, following all the rain that came in with Sally. In the last week, Kristina put me in the saddle, and sent me out on my first Spider trail ride! Then mid-week, I rode him alone with no one helping me at all! I feel silly that this far into it, I’m thrilled with such a small thing, but, I’m doing my best to stay on my path, and not compare it to the trainers who are jumping around, foxhunting, running barrels, or working cows. 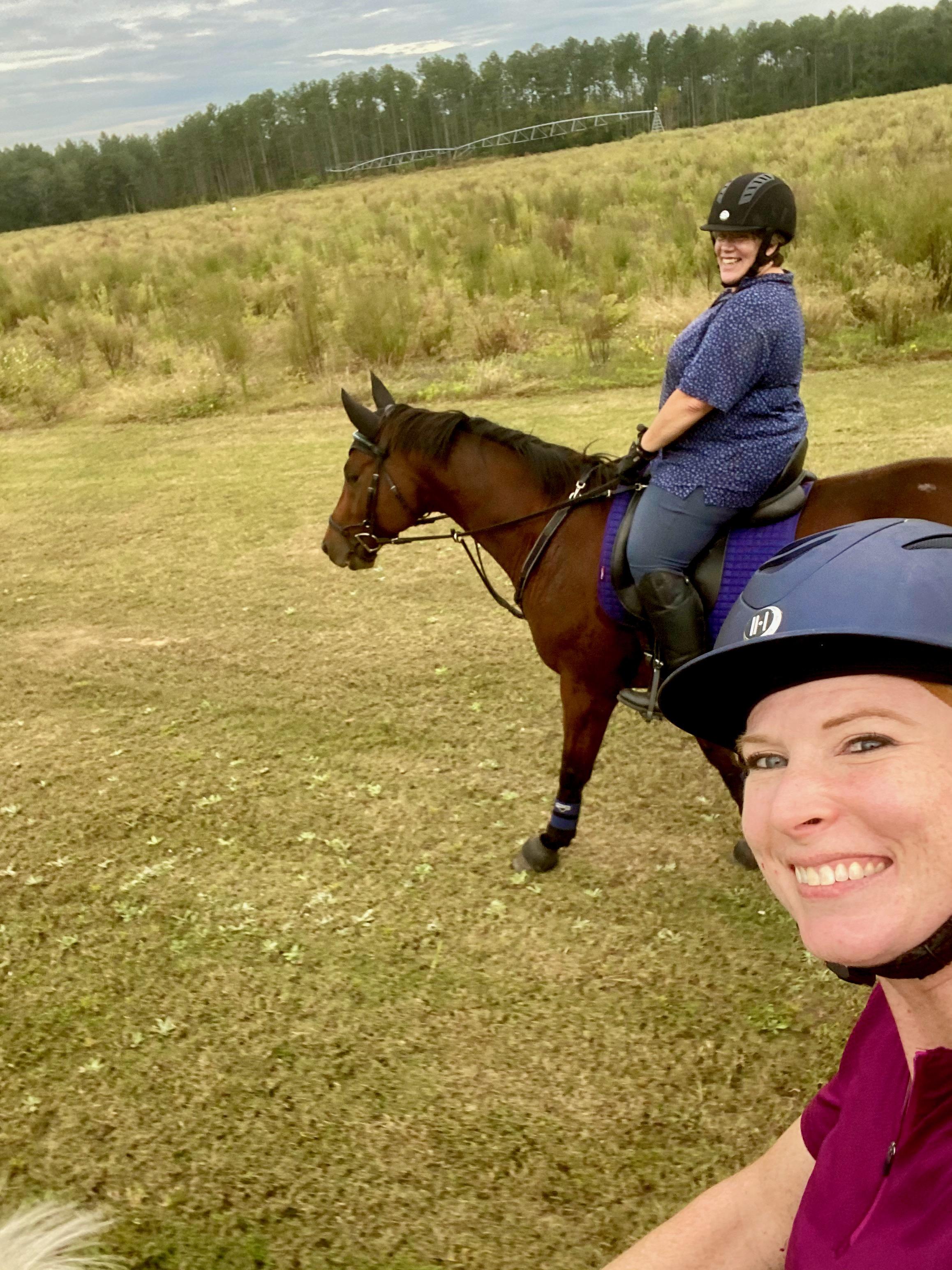 Kristina and me on Spider and Razzy on a trail ride. Photo by Kristina Littlejohn.

We had great dressage lessons on Sunday, and I am so excited. Not just because I can ride him, but to really feel and see him learning. We rode out a little on Wednesday, all alone, and then on Sunday with my trainer, after his lesson. He is finding his feet and his balance, and he is curious about everything. 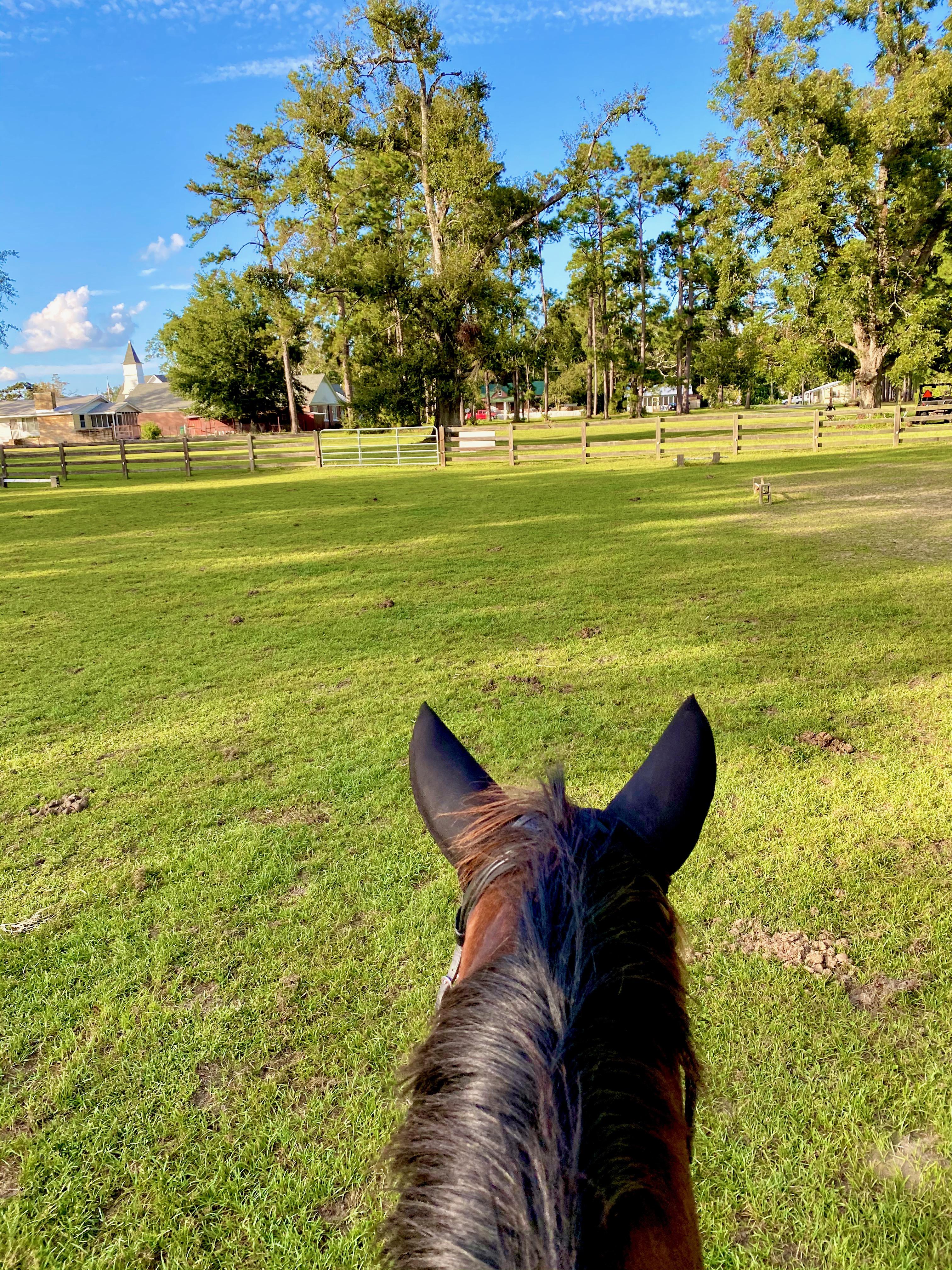 Me looking through Spider’s ears. Photo by Libby Henderson. 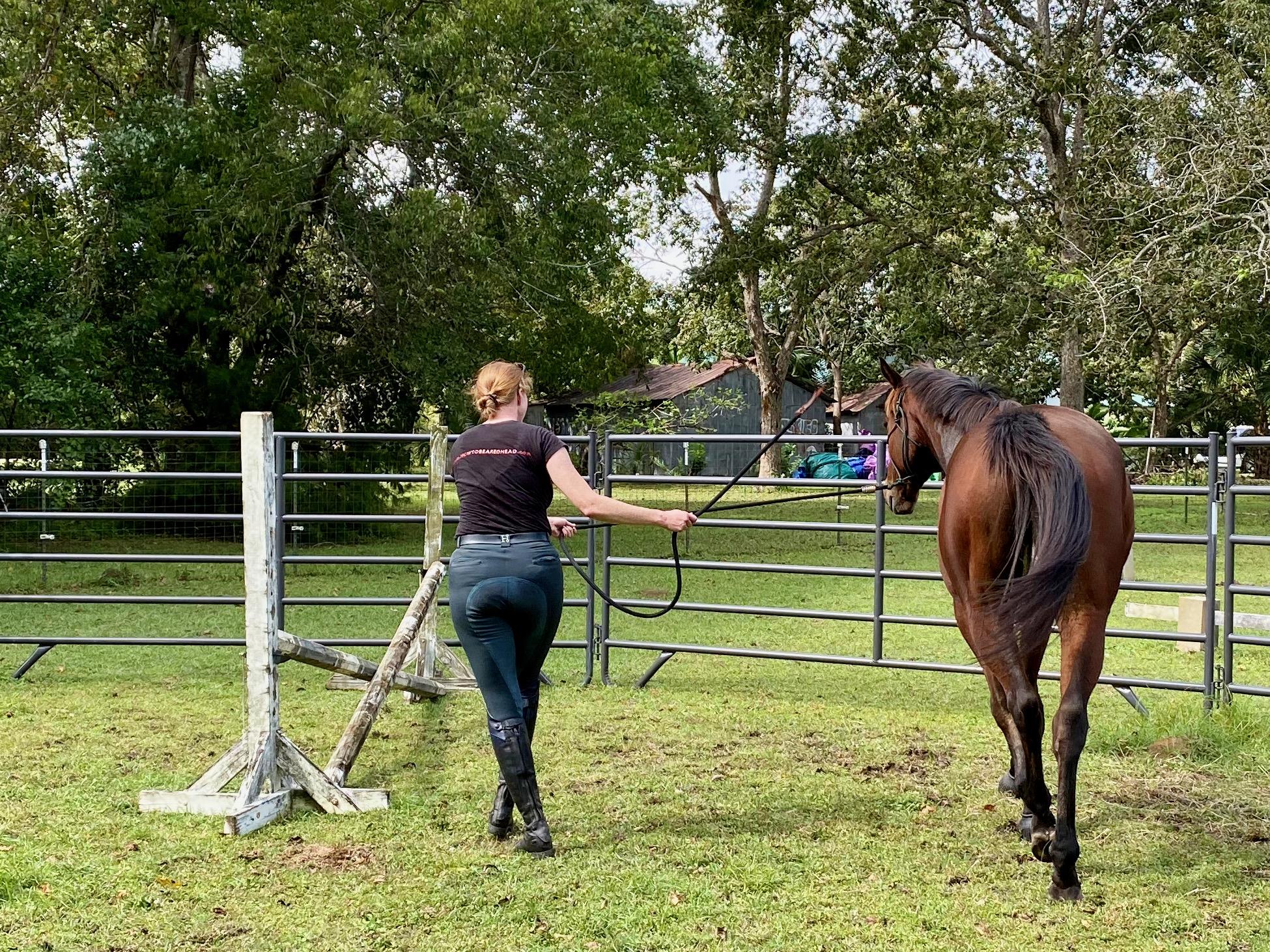 Kristina and Spider, learning about jumps in the round pen, on the lead line. Photo by Libby Henderson.

I’ve thought a lot about comfort zones, and how easy it is to stay within mine. There are books, and puppies, and snacks in my comfort zone, and I like it there. I have a fridge magnet that says “Life begins at the end of your comfort zone” and I spent some time really thinking on that last week. While I like the fact that it is designed to encourage you to try new things, and to try things that scare you, I don’t care for the idea that you aren’t living as long as you are in your comfort zone.

Me on Spider, following Kelley on Francesca on a post-lesson hack. Photo by Libby Henderson.

A little more research unearthed the following quote, that I like much better: “It’s not about getting out of your comfort zone to reach your goal. It’s about widening your comfort zone so far that your goal fits comfortably inside.” Richie Norton, who, incidentally, wrote a book called The Power of Starting Something Stupid (I may have found my guru!) said it.

I am so grateful to the members of Team Spider who are helping me expand my comfort zone, bit by tiny bit!