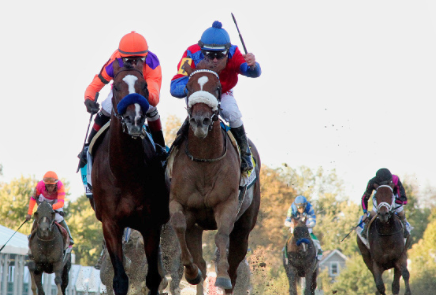 If this isn’t an example of some true mare power, we don’t know what is. We’re in love with the grit Swiss Skydiver showed in the Preakness, and we can’t get enough of her.

We can’t get over the chestnut filly who just one the Preakness. We’re still marveling at the tenacity of the three-year-old filly Swiss Skydiver, who laid down an epic stretch battle with Kentucky Derby winner Authentic to beat the colts in the 145th Preakness Stakes. It was the second-fastest Preakness Stakes, the finishing time of 1:53.10, just .10 seconds off of Secretariat’s 1973 record.

It was a last minute decision by trainer Kenny McPeek to enter the filly in the Preakness versus the Black Eyed Susan, the equivalent leg of the Triple Crown for fillies. Swiss Skydiver (Daredevil – Expo Gold, by Johannesburg) had run second in the Kentucky Oaks and became the first filly to win the race since Rachel Alexandra in 2009. In total, six fillies have won the Preakness, but there have now just been two such winners since 1924: Rachel Alexandra and now Swiss Skydiver.

Given the ride just days before the race, veteran jockey Robby Albarado spent long days forming a bond with the filly, leaving the track with Kenny McPeek only to eat. That bond building paid off, and Swiss Skydiver reacted quickly when Albarado glimpsed a lane opening as the field hurtled toward the far turn. In a fraction of a second, the lane would close so Albarado nudged his ride through and slotted inside of Authentic for perfect positioning to make a stretch run.

Watch the race replay below:

In true “go get ’em, girl” fashion, the chestnut mare stared her opposition in the eye, bringing to mind the duel between Seabisbuit and War Admiral in 1938 or the 1989 Preakness stretch battle put on by Sunday Silence and Easy Goer.

Standing much lighter in stature but more fierce in heart, Swiss Skydiver — who was named for owner Peter Callahan’s skydiving granddaughter — laid one down for the ladies on Saturday afternoon in Baltimore. It’s been a funny year all around equestrian sports, racing included, but this performance proved to be the cherry on top of a twisting, turning Triple Crown season.