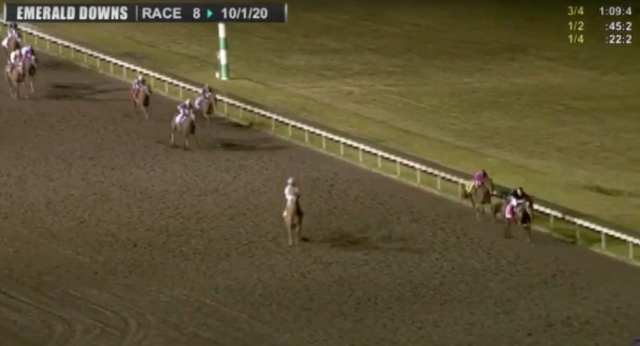 Monday is already the crappiest day of the week, so it only makes sense that we make things official. Here’s our latest “oh crap” moment.

The two-year-old son of Coast Guard was headed toward what appeared to be certain victory over Dutton when the horse ducked to the right … right out of the race.

Jeff Metz, trainer of Coastal Kid, said his jockey speculated that the photo finish lights above the finish line might have spooked the horse, who was making only his second career start. “Alex (Cruz) said when the lights came on, the horse ducked out,” said Metz. “It’s unfortunate to lose a race that way.”

No matter what happened, there’s no doubt that the jockey, trainer and owner were all thinking “Oh crap” when this happened.

Have an “Oh Crap” moment to share? Email your photo/video and a brief explanation of what is going down to [email protected]. Instagram users, tag your moments with #OhCrapMonday (your photos need to be set to public or we won’t see them!).