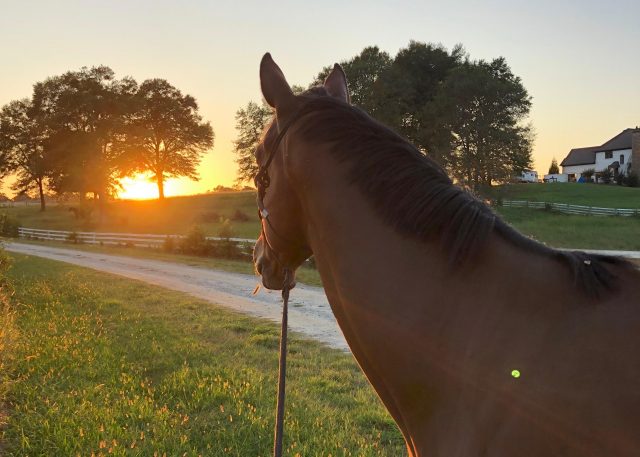 “So, whether it’s the water, the bank, stall rest, or any of the 2020 shocks that have made it home, there’s always the ability to leave, throw in the towel and limit the scope of life … That said, hard as it might be, usually, the best answer is to go forward.”

Following the announcement that the Retired Racehorse Project‘s 2020 Thoroughbred Makeover and National Symposium, presented by Thoroughbred Charities of America, will be postponed to 2021, competitors have been working to decide what comes next for them and their mounts. Today, blogger Aubrey Graham discusses how, more often than not, the answer is to go forward.

“You have to be more annoying than the water,” I said, directing a student to encourage her mare into the cross-country pond. “Be kind, but also be a nuisance. She needs to understand that the only good answer is to go forward.” Eventually, the mare rolled an ear back on her rider, took a deep breath and put one foot in, then the other, then watching her own splashes, marched to the other side. When the going gets tough, sure, you can always turn around and trot away from the water, but really, most-times, the best way out is straight through the middle. 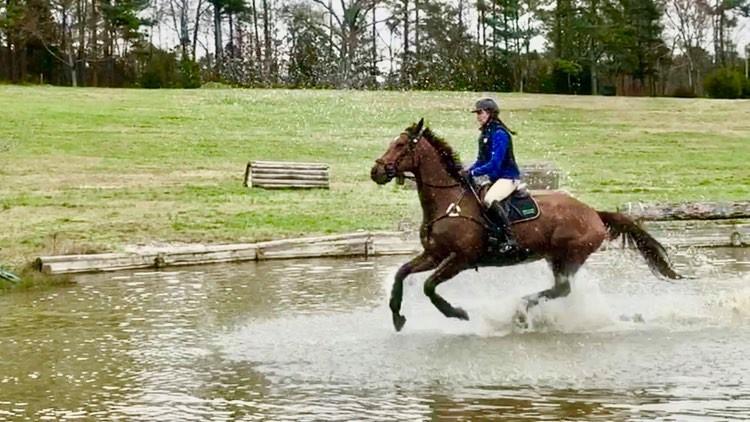 Throwback to when Boomer (JC Vanderboom Ridge) got to gallop through the water (He’ll get there again, if he ever gets out of this damn stall) Photo by Kassie Colson.

I don’t have enough fingers to count how many times I have told people to just go forward over the past couple months. (There have been some other great pieces written on this recently, too). Much of it, of course, has to do with the horses. Think they might buck? Go forward. Inverted? Moving in a lackluster gait? Go forward and then probably go forward even more. A potential stop at a fence? Keep leg on, sit up, and go forward. And then there’s life, and all the lovely 2020 wrenches, sudden blind-siding wrecks, and dragging mires. Same thing – pick yourself up, go forward. The only way out of this year and all its fires, small and large, is straight through the center of them. 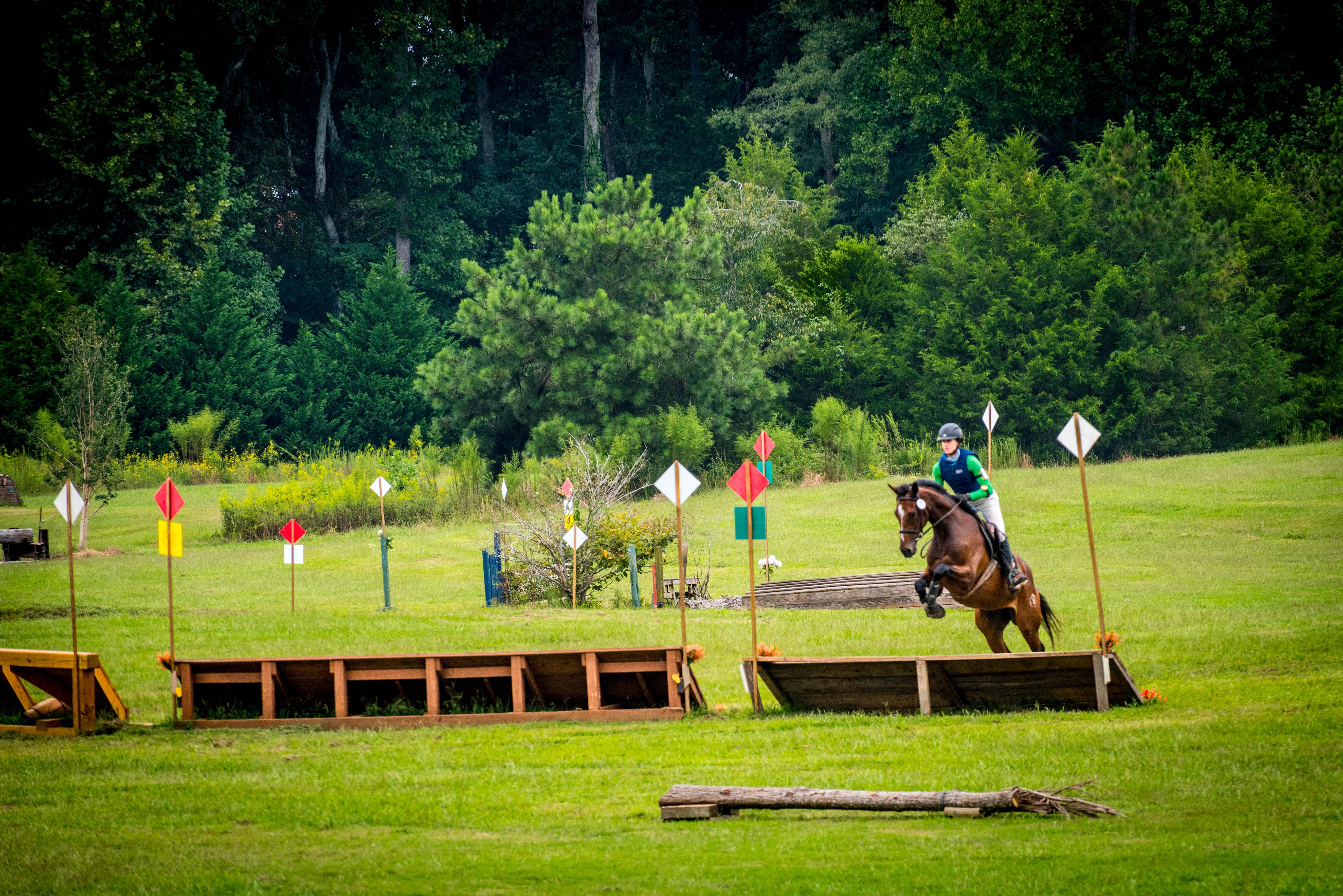 And in this, we teach our horses (and ourselves) to be brave. By being more annoying than the water, by resonating confidence, we get them to take that first step and to then take the second, and then to realize that getting to the other side maybe wasn’t so awful after all. This is the beauty of training the greenies out on cross country. Four-year old Spoo (JC James Brown, owned by Jennifer Vickers Kelly) exemplifies this well. He has been in training at my barn for a month and came out to school XC once with me before running a Tadpole horse trial at the Big Cheese Eventing show at Ashland Farms last week. As we cantered down to fence five, the up-bank, I knew he was going to balk but decided the experience was worth the challenge. We trotted and then walked up to the bank, nose ever pointed up the hill, he skittered left and right for handful of seconds. I just sat there, laughing, “Come on, go forward, kiddo.” When he finally did, he leapt up the bank and threw a seriously good “I DID IT!” buck on the backside that had me cracking up all the way to fence six. 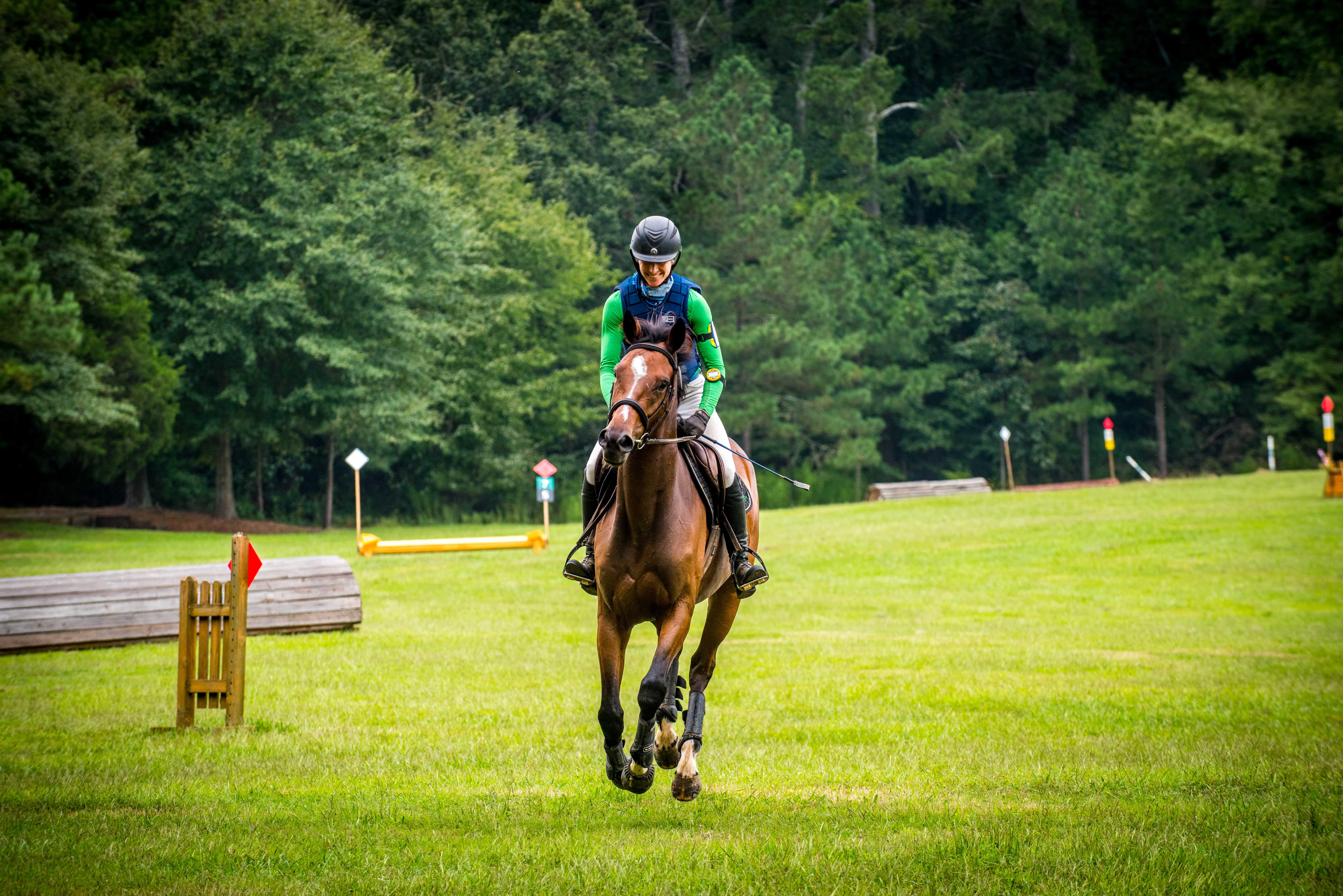 Other advice – go find yourself a horse that makes you laugh at their enthusiasm. This one (Spoo – James Brown) is pretty special. Photo by Amanda Tozzi.

Some great XC horses might be born that way, but solidly good XC horses certainly can be made. Go forward. Do the scary thing confidently enough, with enough positive feedback, and the courage to do it again will grow. They’ll trust us to have their literal and figurative back, while we ask for a rejection to fear. Eventually, they won’t need our intensive support and, like those that came before them, they will hunt the flags and earn the label “bold.”

Forrest (JC Don’t Noc It) hopping into Poplar’s water. After his XC run at the 2018 RRP Forrest was labeled by a few as, “Perhaps, maybe, just a little too bold?” No such thing. Photo by Greg Lyon.

I have a three-year old in my barn right now to whom this all applies a little too well. Irish Summer, owned by Kelly Lupton, is a gorgeous gray three-year old off-tracker. He stands shockingly proportional at 17+ hands, already wearing a 52 girth and growing. Irish is a giant puppy – sweet, goofy as hell, and the type of horse most folks would love to have in their barn. He’s also at the phase where he can grow brave… or not. He’s never nervous, but relying on his rider for confidence, he pauses at the geese flapping in the pond, at the new grass-wall jump, or at the barrels I haphazardly moved to the edge of the ring. Gently drive him forward, let him look from the side while going past it, keep his feet moving, don’t care, and just go forward. He’s learning to look less, wondering if he should worry less too. While rarely easy in the face of real challenges, forward is brave-making. Give him a couple of months and innumerable “I don’t care, go forwards” and I’m pretty sure this horse is going to kill it in eventing. 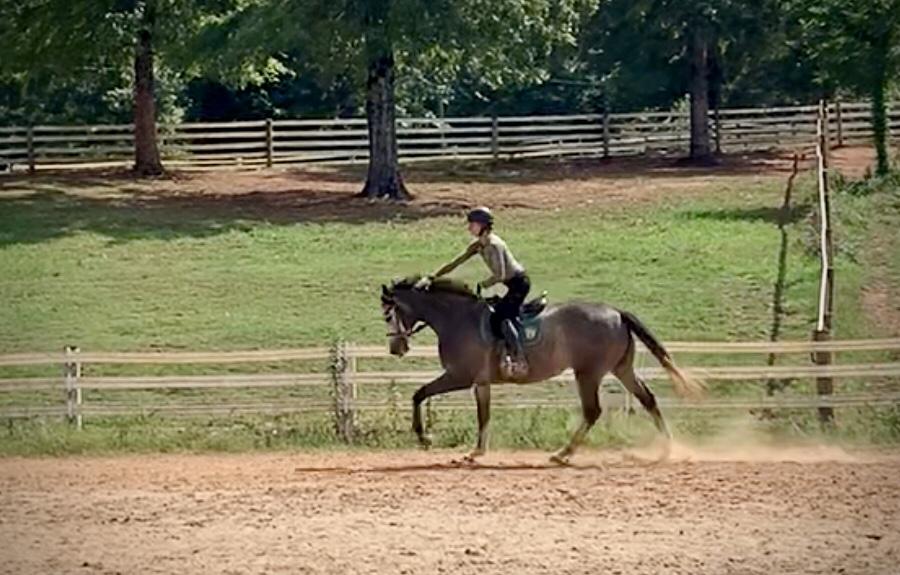 Sometimes that brave is the bid at the geese-laden water, sometimes it’s far less exciting: The commitment to a slow burn risk – on taking the time to let horses heal, on working to get our bank accounts over the vet bills, or to ignoring better advice and giving a human another chance. Boomer is still mired in the sloth stage of heading-on his injury. He’s tired of stall rest but enjoys getting to act like a well-behaved dog when I take him out. Attached at the end of a long lead rope, he follows me around while I teach lessons. He recently came with me when I had to hop on a long, uncomfortable phone call – beer in the left hand, his lead shank in the right, phone on speaker shoved in the shoulder strap of my sports bra. After four — or is it five? — months of confinement, he’s still respectful and a welcomed distraction, mostly munching the grass, but his occasional bucking and twisting was kindly limited to the range of the rope. His next ultrasound happens this coming Monday, and then I’ll get to find out if he gets to head towards freedom and happiness again, or if he’s still stuck in the middle waiting it out with me. Believe me, I’m looking forward to being able to write something more here than, “We are still in a stall.” 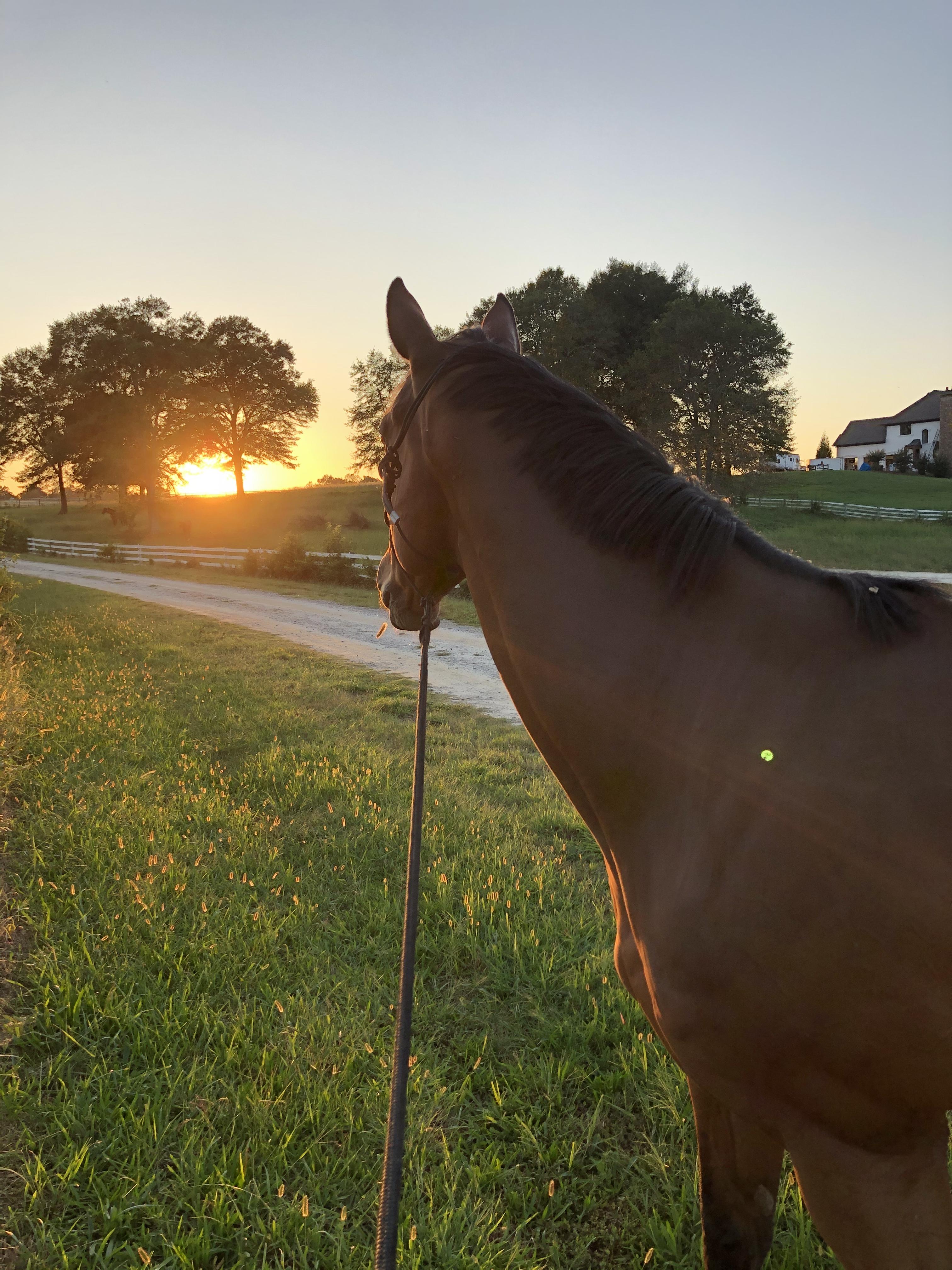 Boomer hanging out with me in the evening, enjoying some out-of-stall time. Photo by Aubrey Graham.

Juice (JC Pulpituity), however, is coming through his suspensory hell, and hopefully forgetting how awful that version of snail-paced “forward” was. After way too many months of stall rest and failed turnout attempts, he is now out with friends. On Monday, I stuck Juice in the small field near the barn with Fletcher. Sorry, Fletch. Juice pranced, and stole his hay, parading around aiming to drive a reaction, but old-soul Fletcher just let him literally abscond with the hay from his mouth and burn unnecessary calories. Under saddle, Juice is sane again — the bucking and two legged acrobatics are shelved. 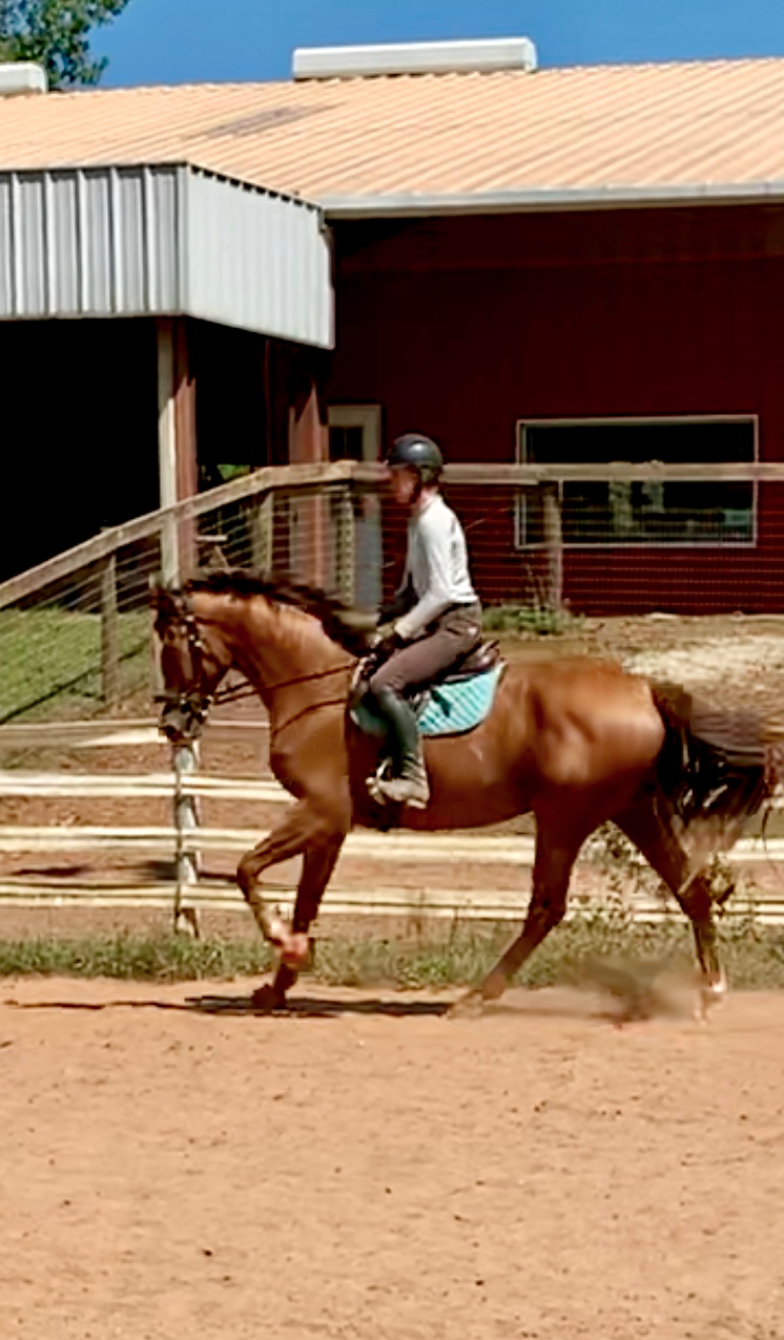 Juice is back under-saddle and feeling great. Photo by Lindsey Keegan.

In its place is the same (albeit now slightly taller) horse I untacked nearly 10 months ago – a stunning gelding with gorgeous walk to canter transitions, lovely trot movement, and lead changes that look more like slap stick imitation of changes than actual swaps (one of those changes pulled his shoe at the 2019 RRP and tossed it a full 15 feet outside of the stadium arena). His slow, often-unsteady movement through his hell wasn’t always forward exactly, but now that he’s out and moving, I’m hoping that the momentum he has stored up propels him ahead for many months… years… to come. 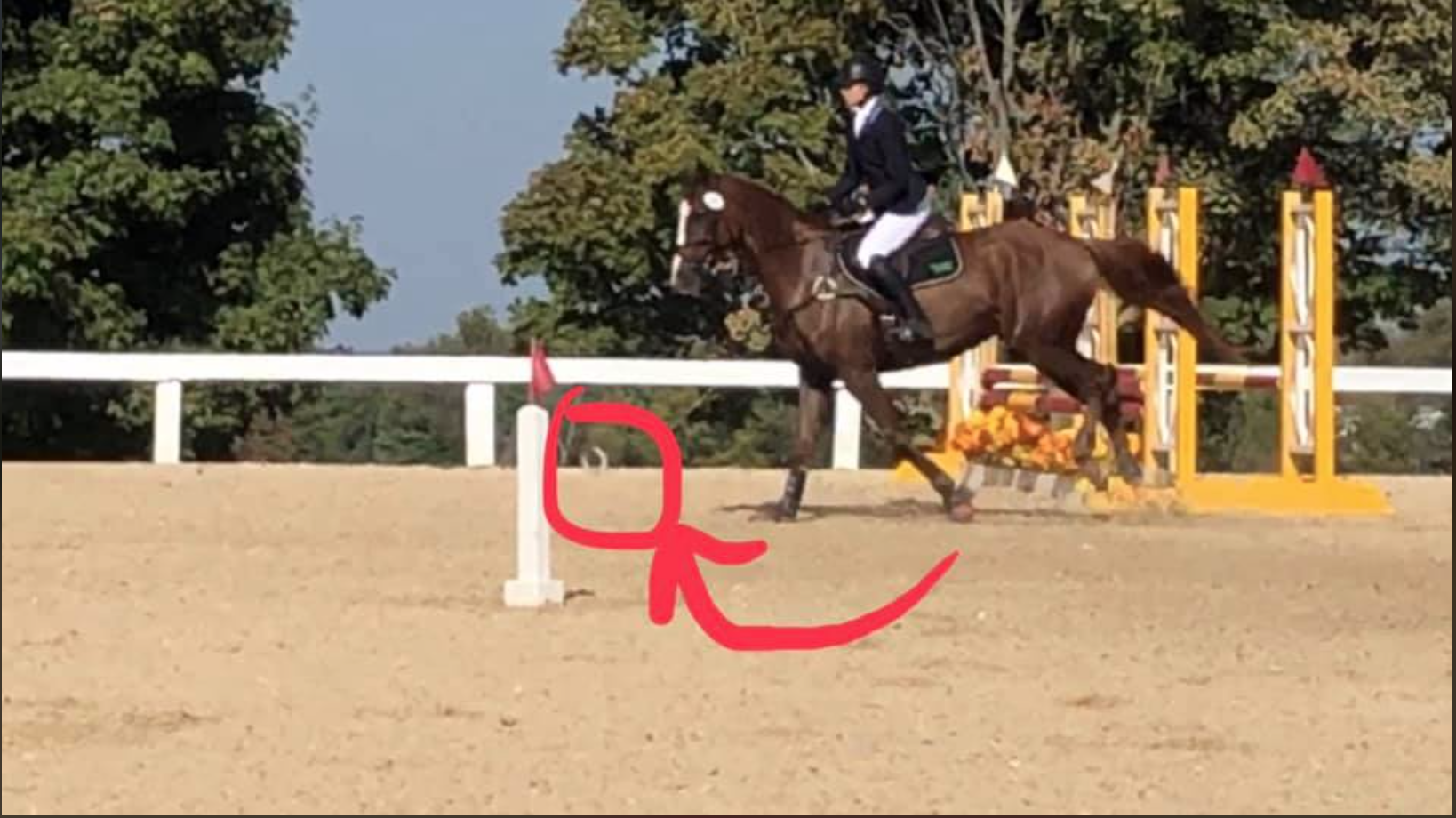 Juice throwing his shoe well outside the ring at the 2019 RRP. The shoe is circled. Photo by Kassie Colson.

So, whether it’s the water, the bank, stall rest, or any of the 2020 shocks that have made it home, there’s always the ability to leave, throw in the towel and limit the scope of life (…welp, guess there’s no XC for him, then). That said, hard as it might be, usually, the best answer is to go forward. And if this damned year is going to teach us anything, it is that we might as well keep our feet moving until we’re putting each foot in front of the other. Because, well, there’s no doubt that this year is providing ample situations in which to learn to embody the “don’t care, go forward” until we are all doing so, and doing so boldly.