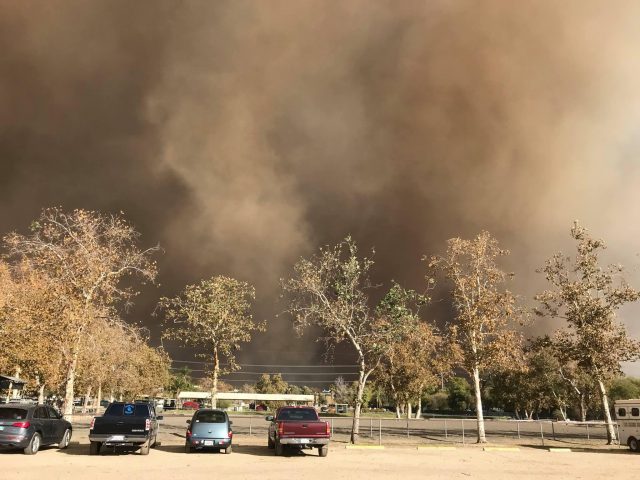 “The thing about fire is, you never know where it will start, where the dry, hot winds will blow it, when those winds might change, and how much time you have. The time to prepare is limited.”

Before the eye-watering fear (oh, no…the fire is RIGHT THERE), steely determination (if I have to carry these horses out, they will be safe, damn it) and laser-focused calm, there’s panic.

It comes when your phone awakens you from now-unremembered dreams. Fire. It’s close. We have to evacuate the horses. And then the adrenaline kicks in. You’re dressed and racing up the 405 at speeds that would not please the LAPD. An understanding dawns as to how a Thoroughbred must feel bursting from the starting gate. Taut. Sweating. Snarling at anyone who dares get in your way. Simultaneously, you’re calling barn friends to make sure they know about the fire. Can they get to their barn? Or is their access blocked by LAFD or LAPD? Do they need help? Where are their horses? 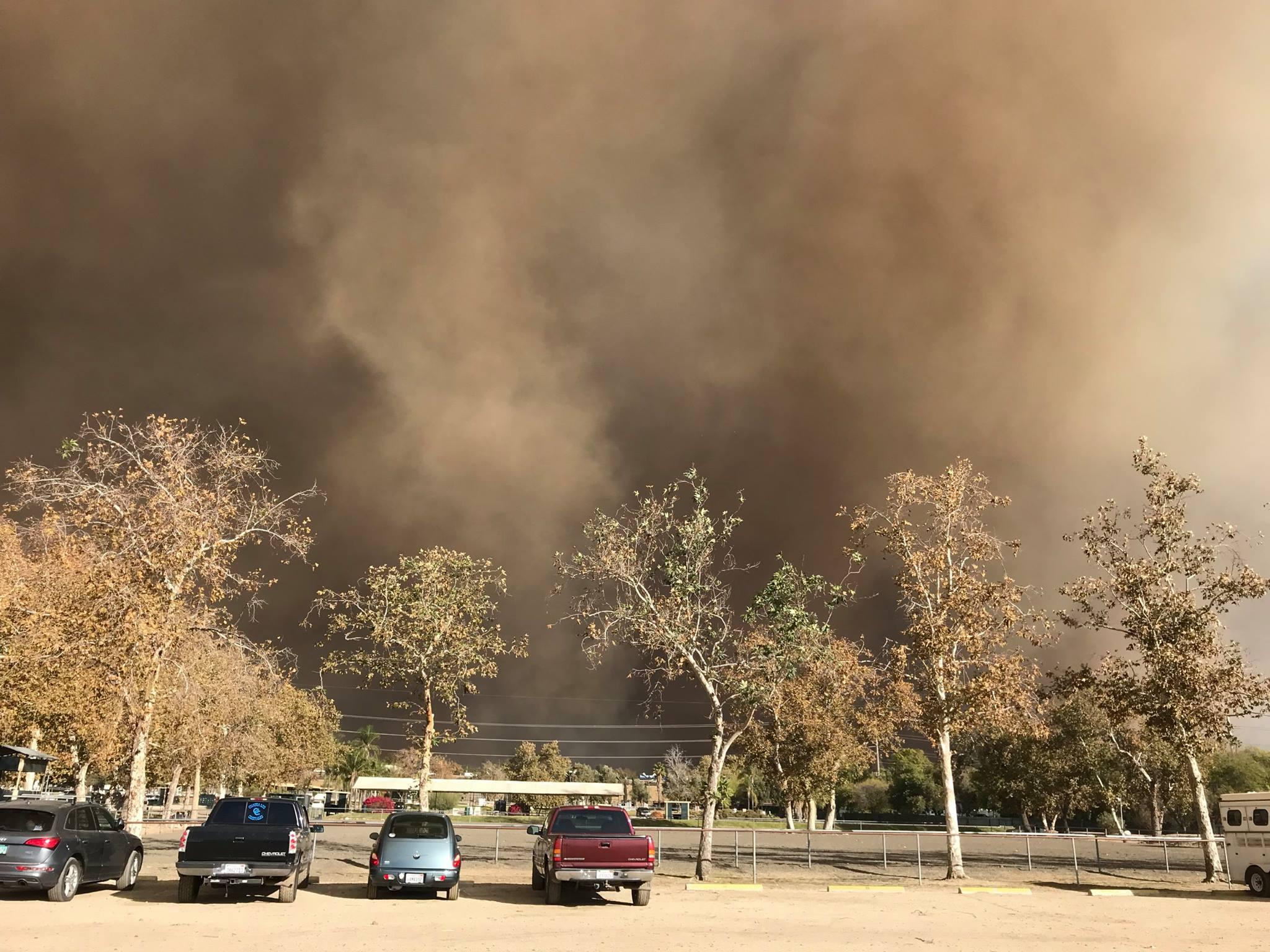 But first, you have to get to your barn to help if you can. The sky is dark, not just from the lack of sun, but from the smoke, which dims even headlights. There’s an oppressive feeling all around, as if something is bearing down. Because something is. As it rises, the sun makes that abundantly clear.

My first evacuation happened when I had my horse, Spartacus. As fire does in California, it came in a flash — one minute all was well, the next fire had materialized, bringing with it the sirens, blocked-off roads, and a flurry of people fleeing with their animals. The ranch where I kept Spartacus was hugged in thick smoke and fire flickered in the distance. My barn owner’s friend made available her property a couple miles away on the safe side of the freeway. Some people jumped in trailers, while I along with others hopped on our horses and rode to safety. That night, watching the fire glow from our safe haven as it burned adjacent to where our horses had been was terrifying. The next day, we found our ranch unscathed (thank heaven), but the scent of wildfire clung to the inside of my car and my dreams for ages.

Occasionally, horses are evacuated, and then evacuated again, as was the case two years ago during the Saddle Ridge fire. That time, a couple of my friends who boarded at my old barn were not immediately available to look after their horses. Neither had confirmation that their horses had indeed been evacuated, only that some horses had been removed while others waited for rides. I flew up the 405, dropping out of warp speed only when word came that the horses had been safely removed to the Hansen Dam Equestrian Center. Upon arrival, I could see from the parking lot the fire billowing and snarling just across the 210. When fire makes its way into populated areas, the freeways act as fire breaks, but this time there was great concern it would jump, despite the valiant efforts of the firefighters. 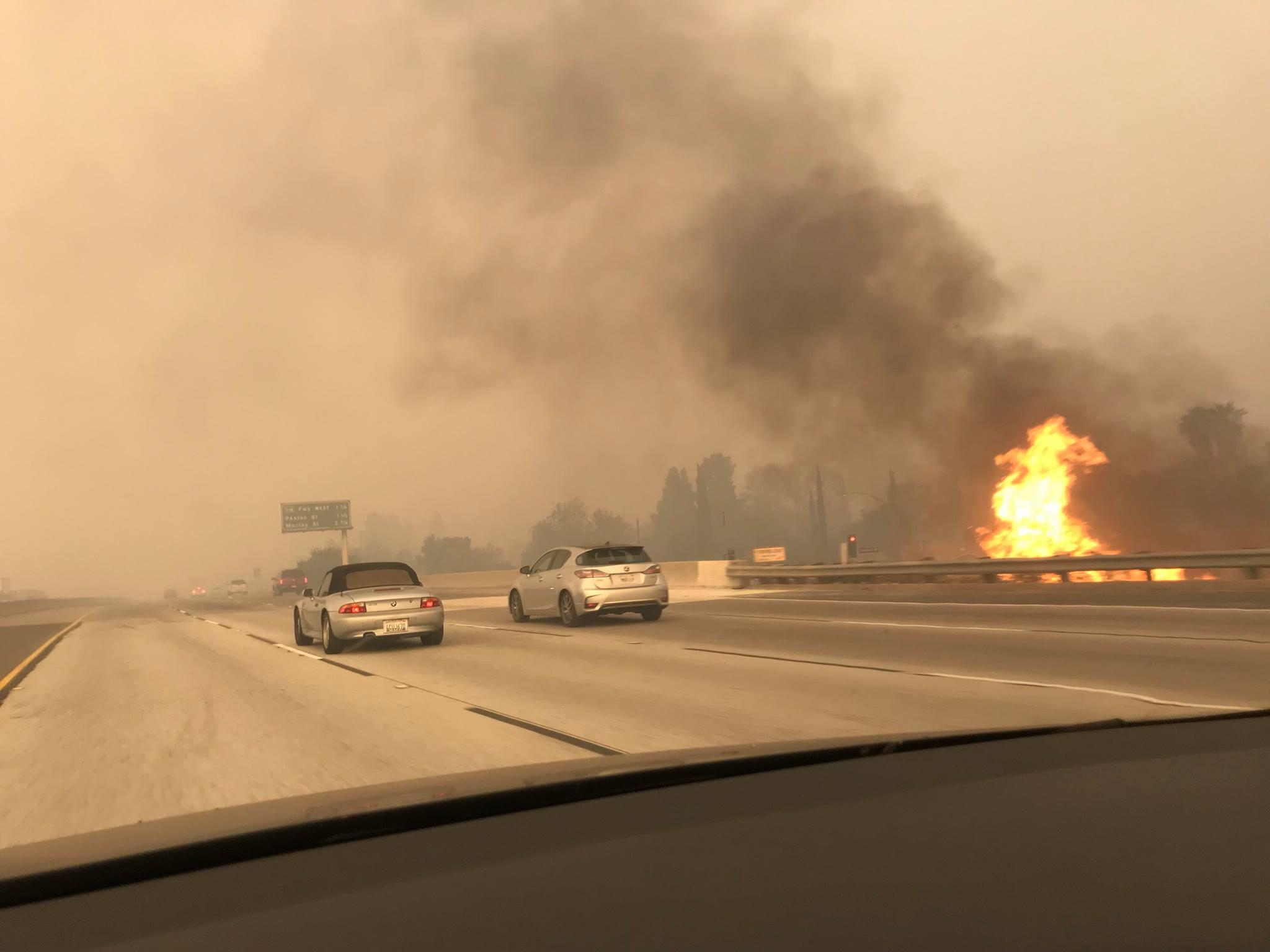 Saddle Ridge fire on the side of the 210. Photo by Jessica Fox.

So, we evacuated them again, this time several miles west to my current barn, CB Sporthorses, where the air was clearer and it was safer. The fire we left behind devoured my old barn (it has since been rebuilt by its new owners). Everything burned, including all the tack and equipment I had stored there, but every single one of the dozens of horses living at both North Ranch and Middle Ranch was safe, thanks to the efforts of trainers, grooms, owners and local horse people. For that, I am eternally grateful. When I went back to see if anything was left, all I found was my sweat scraper and a pair of scissors welded to a concrete foundation. Imagine, for a second, the heat and intensity that would melt metal. 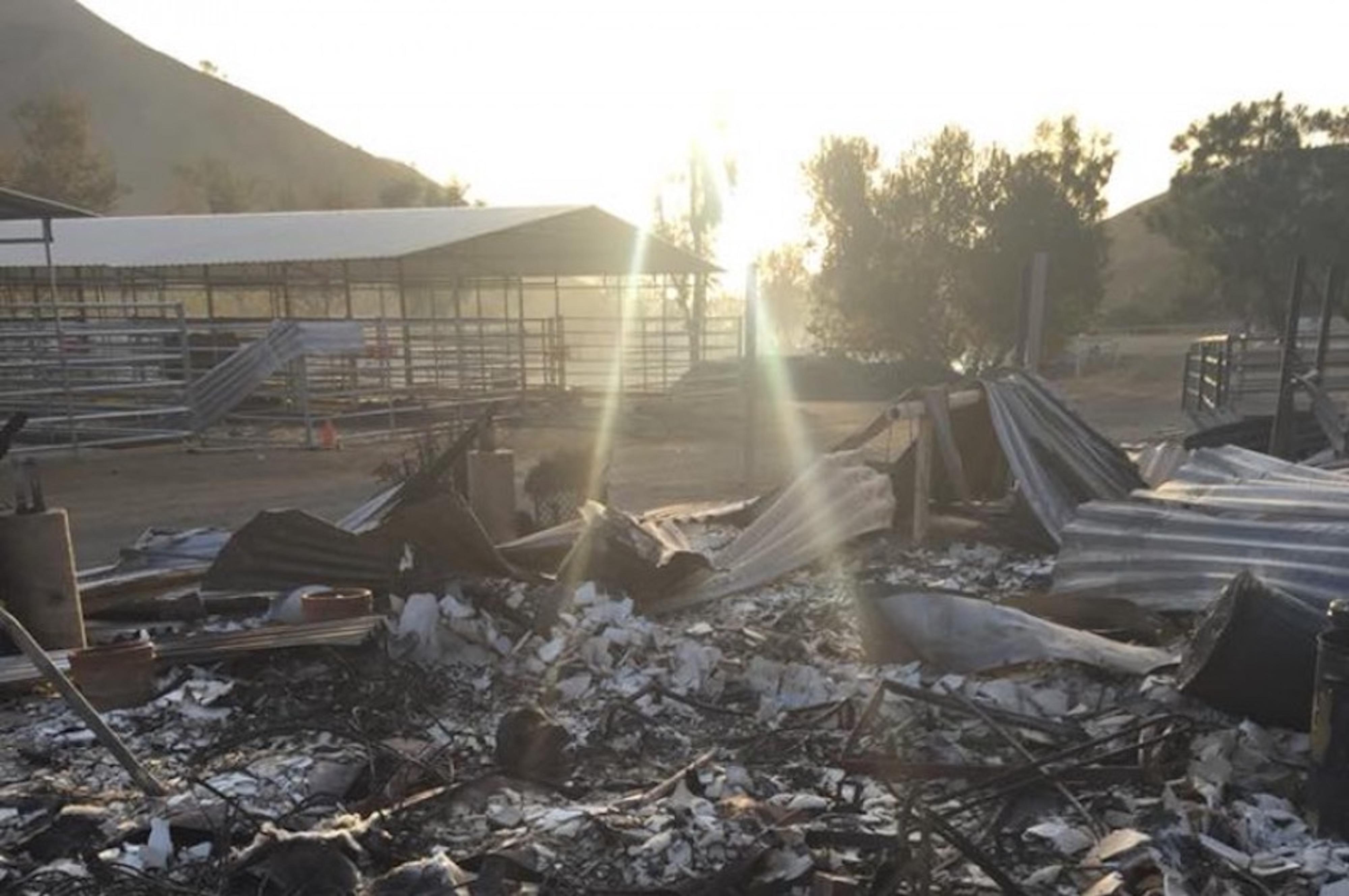 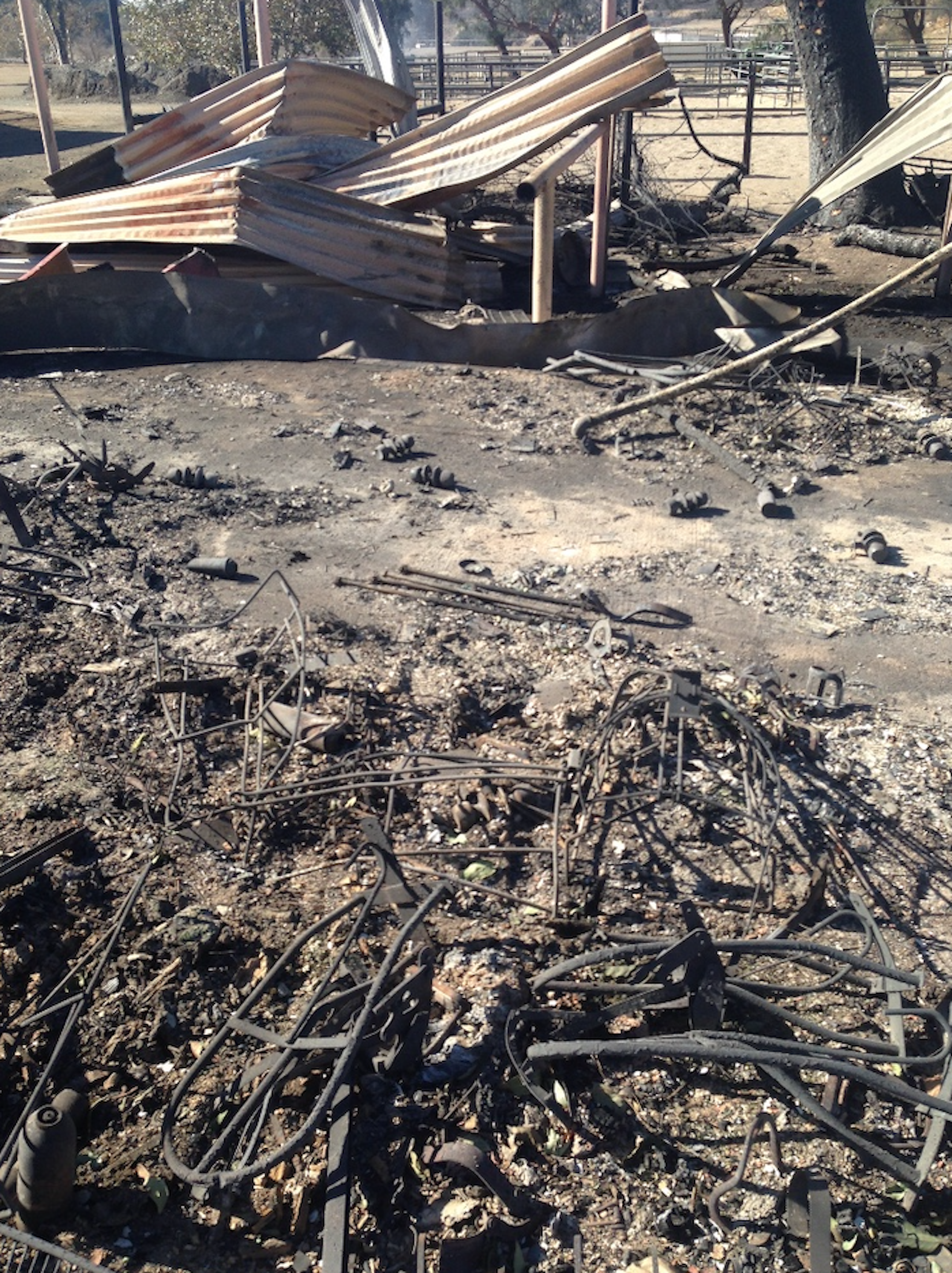 What remained of the tack lockers and North Ranch. Photo by Jessica Fox. 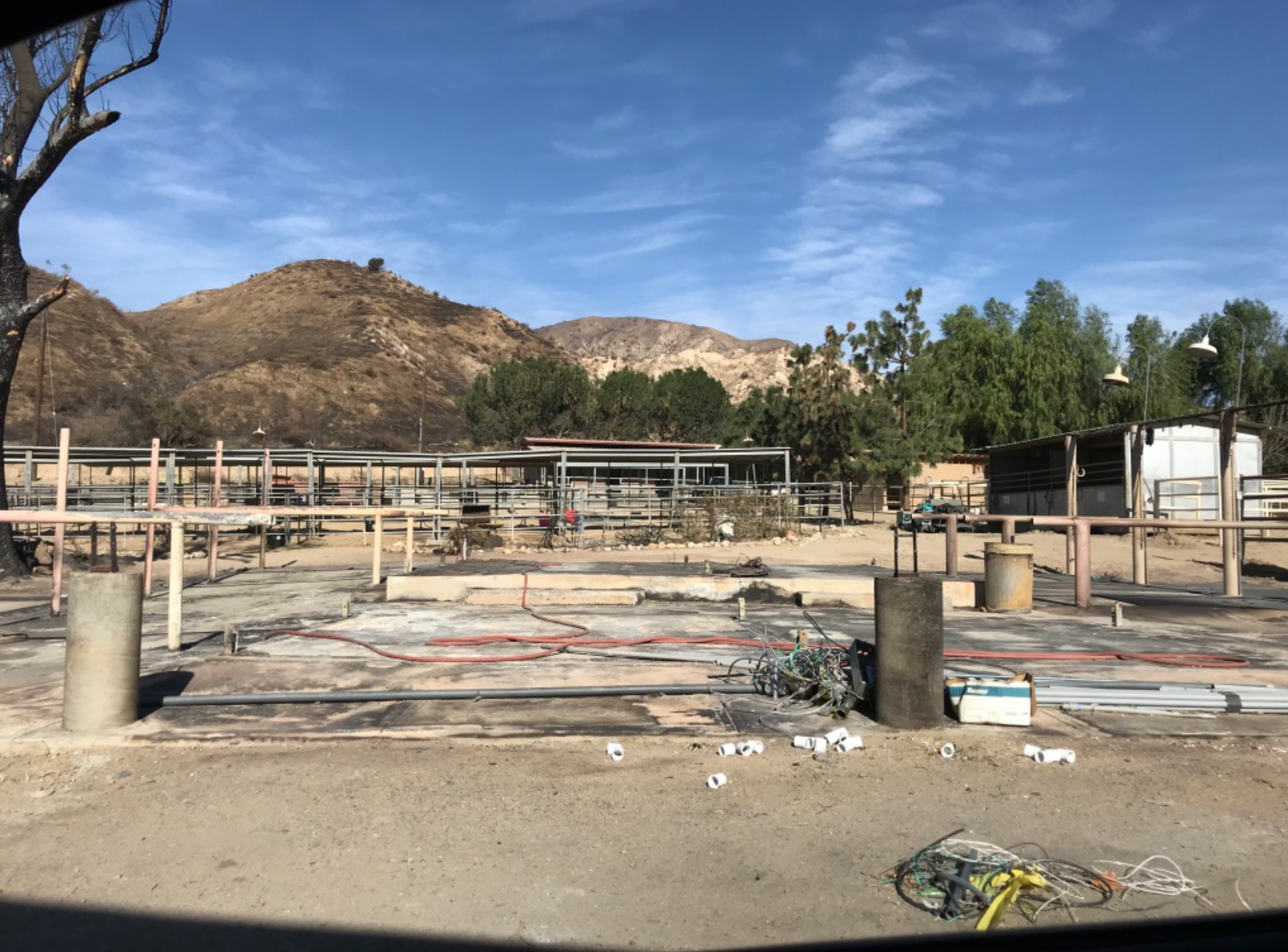 This is where the tack lockers were at North Ranch before the Saddle Ridge Fire. Photo by Jessica Fox.

The thing about fire is, you never know where it will start, where the dry, hot winds will blow it, when those winds might change, and how much time you have. The time to prepare is limited. Sometimes you can evacuate ahead of time, when it looks as though a far-away fire is turning into a close one. But mostly you just keep on top of the weather and the red flag warnings the best you can, keep in touch with your barn manager and/or trainer, and do your damndest to have people you can count on ready with trailers if everyone won’t immediately fit in your trainer’s four-horse. And if all that fails, you better have a contingency plan to simply ride out.

While it’s scary, stressful, and sad, beauty does bloom alongside the danger. When there’s a fire, it’s all equestrian hands on deck. Professionals come to the aid of other professionals, your equestrian friend group circles the wagons, riders stop what they’re doing and race to help. Good samaritans hitch up their trailers and appear, ready to help and offer their own horse property as sanctuary. The giving doesn’t stop there. Donations of food, equipment, and more appear. We do the best we can to give our fellow riders and professionals a leg up. Though a natural disaster and its aftermath are harrowing, it’s that pulling together that gives me hope and makes me proud to be a part of the equestrian community.