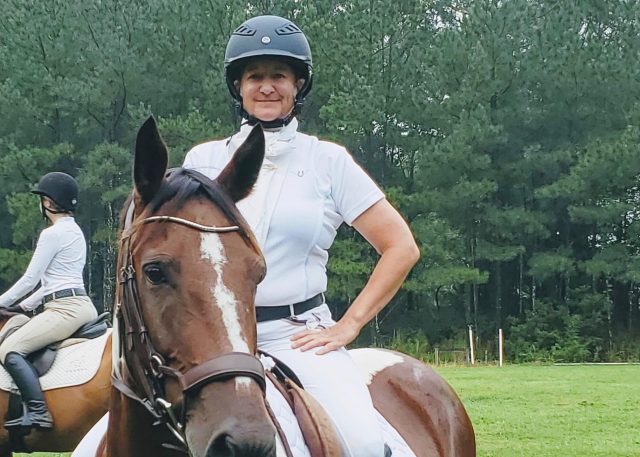 “’I’m just a nervous/scared/timid rider.’ I could not just ride better and escape this. And worse, deciding that I was just a scared rider was allowing me to gradually get used to operating through a truly dangerous level of physiological shut-down.”

Following the announcement that the Retired Racehorse Project‘s 2020 Thoroughbred Makeover and National Symposium, presented by Thoroughbred Charities of America, will be postponed to 2021, competitors have been working to decide what comes next for them and their mounts. Although Jen has decided to sell Louise, she is moving on in her journey as a rider. Today, she discusses how she has been addressing her anxiety and fear when it comes to riding.

JC: Kielbasa is one month post arthroscopic fetlock surgery and while his incision has healed perfectly, he is not as sound as the surgeon expected him to be at this point, which means another vet visit this week, so stay tuned. This poor Sausage has had a tough 2020 — he is able to have a little daily time (sedated) in a small paddock outside now, where he eats grass and smells the fresh air like he’s been in, well, quarantine. Continued stall rest looms.

Louise, JC: Sweet Hall, on the other hoof, is happy as a clam and still waiting for her future person — hint, hint, come get her — as she enjoys race retirement groceries and frolics in the pasture.

In which I battle fear:

Anxiety about riding was a given for me. I called myself a nervous rider, a timid rider and, on days when I felt better about myself, a very conservative rider. I had all kinds of little tricks, including medication, to help me get on and get going. I used and still use a personal arousal scale of 1-10 when mounting, and will not put a leg over a horse until I am at a 4, so as not to blast the poor beast with my anxiety as soon as we make contact and have one of those dread explosive mounting accidents. But all of these tricks and systems overlaid onto my fear neither removed nor contained it — I was just surviving something that was supposed to be fun, and my riding anxiety was seeping into the day and night before big rides.

In this Year of Riding Better, I was relying on my coaches and on building my fitness as a rider and having a series of little successes to build new neural pathways of confidence, to stop using my neural super-highways of fear. It was a slog. 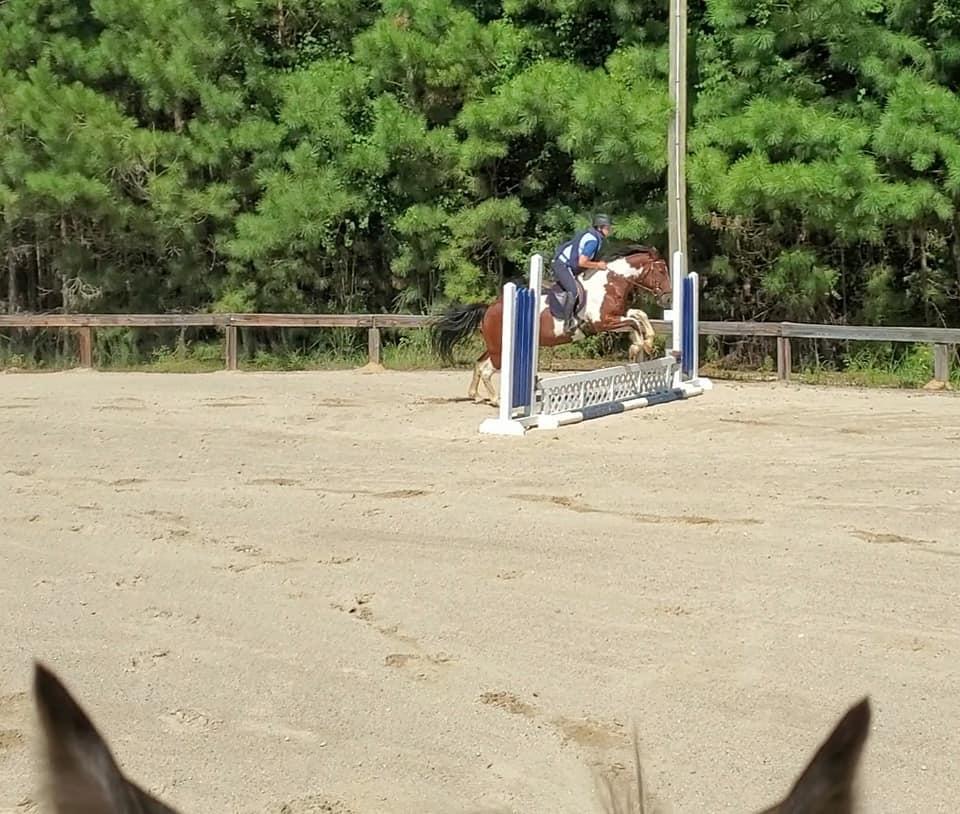 The Arena of Doom. Photo by Kelly Burns.

When jumping, I was nauseated, always on the verge of tears. I would become stuck in a stiff bent forward position, when anyone gave me verbal instruction it was like hearing a foreign language, I could not hold more than 2 jumps in my head, my voice was angry and it was hard to make a complete sentence when I spoke in response, and the worst thing? I call them my Emergency Cramps. Each time I managed to get over a jump and land (or stay on a spook, trip, buck, etc.), my entire pelvic area, starting from my right hip, would cramp — both sides of my butt, my upper legs — painfully and dangerously! My response is always laughter as I gasp, “emergency cramp!” because the cramp happens just as I have “survived” some thing that I am obviously perceiving as life-threatening, but the cramp is actually freezing me into a position that I can’t ride from. So my “little successes” were literally jumps that I got over without cramping and almost falling off on the other side. Obviously an entire course of jumps was a tall order.

I was up to about three jumps in a row and counting down the last few days before my show debut with Ribsy, when I told my dear friend and colleague Terry Lewis, about jumping despite my terror at even setting foot in the arena. Her first question was, “Why the hell are you making yourself jump, if it terrifies you?” (yes, dear reader, as you have surmised, Terry is a professional therapist in real life). I told her that I believed that I loved it somewhere underneath the terror and that I was trying to take all of my riding apart at the seams to find what it is that I love. “Okay,” she said, “what happens when you’re afraid?” And I started to describe the above things, which turned out to be SYMPTOMS — duh! “Oh,” she interrupted, “that’s the dorsal Vagus nerve causing all that stuff and shutting you down into a physiological freeze. Here’s a simple breathing exercise, to start . . .” 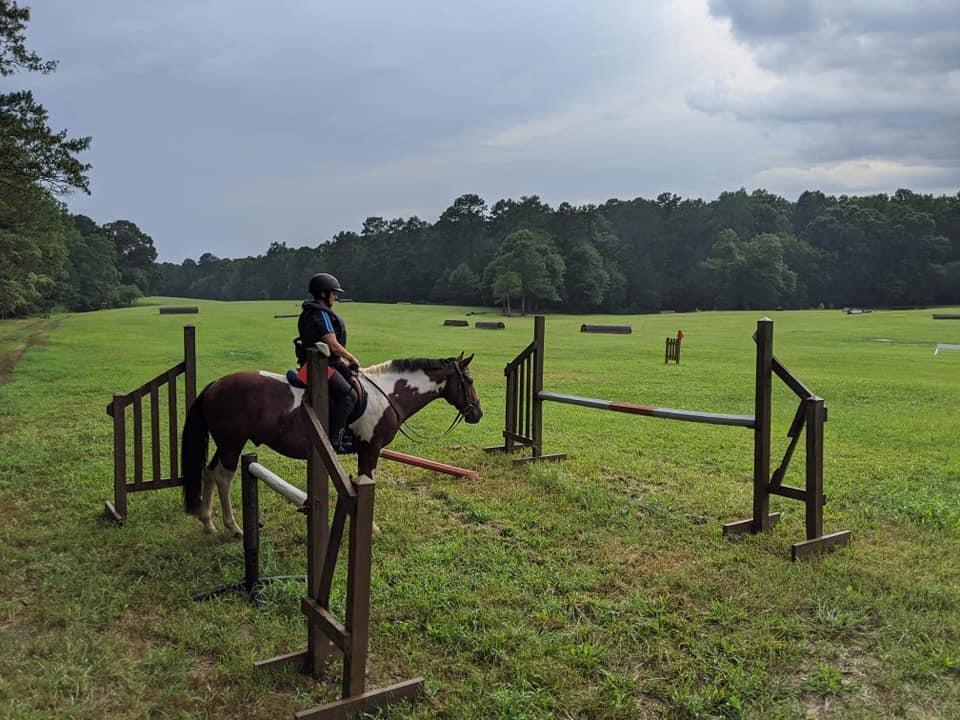 Pre-show meditation in the start box. Photo by Kelly Burns.

And that exercise gave me an action that I could put into work that day and in the weeks since, including the week that Ribsy and I conquered our first three-phase show. That’s right, folks, I went from crying and frozen in fear to three phase — not quite as catchy as Couch to 5k, but no less monumental! I chose the Amoeba division with 18” jumps and some canter in the dressage test, mainly from pride, as the show was the day after my birthday and I could not stand the thought of being a 52-year-old in anything called Pre-Amoeba. Ribsy was excellent. He is one of those guys who stands around like a sleeping cow, happy to munch hay or just catch some rays by the arena, and then perks for a warm up and turns it on for his round.

To start our day we had an “enthusiastic canter depart,” dressage speak for bucked onto the proper lead, and for some reason this struck me as such a whimsical thing that I spent the rest of the test with a giant smile, and we got all of our movements and stayed in the arena. Show jumping, in the former Arena of Doom, was pretty dang fantastic as I was very nearly fear free. My mind was clear, I could see two jumps ahead. It was, in a word, really freakin fun.

Cross country became the hero’s journey when the fat paint hero had a bit of a bucking fit after jump number three, and Our Lady of Many Vests (that’s me) had to have a bit of a chat with him and the gods. We chatted, walked a few strides, resumed, and finished. I was, and am, immensely proud. But instead of having my normal relief at having survived the riding event and being SO thankful that it is over, I have found myself looking forward to the next ride with a buzz of excitement and mentally lining up my goals for our next time out. 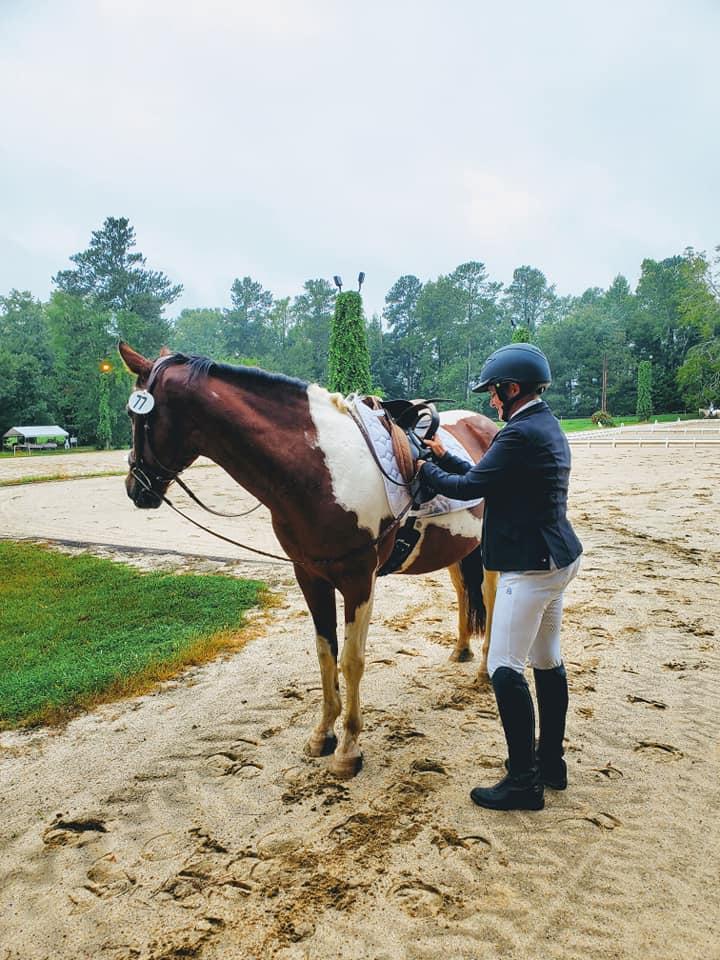 I am more than familiar with false narratives in other parts of my life and have spent decades unlearning them and learning to lean into and thrive in my personal and professional lives. While I have replaced lots of bad riding habits and practices with better ones, no small thanks to my horse trainer better half, I missed this most glaring one. “I’m just a nervous/scared/timid rider.” I could not just ride better and escape this. And worse, deciding that I was just a scared rider was allowing me to gradually get used to operating through a truly dangerous level of physiological shut-down. 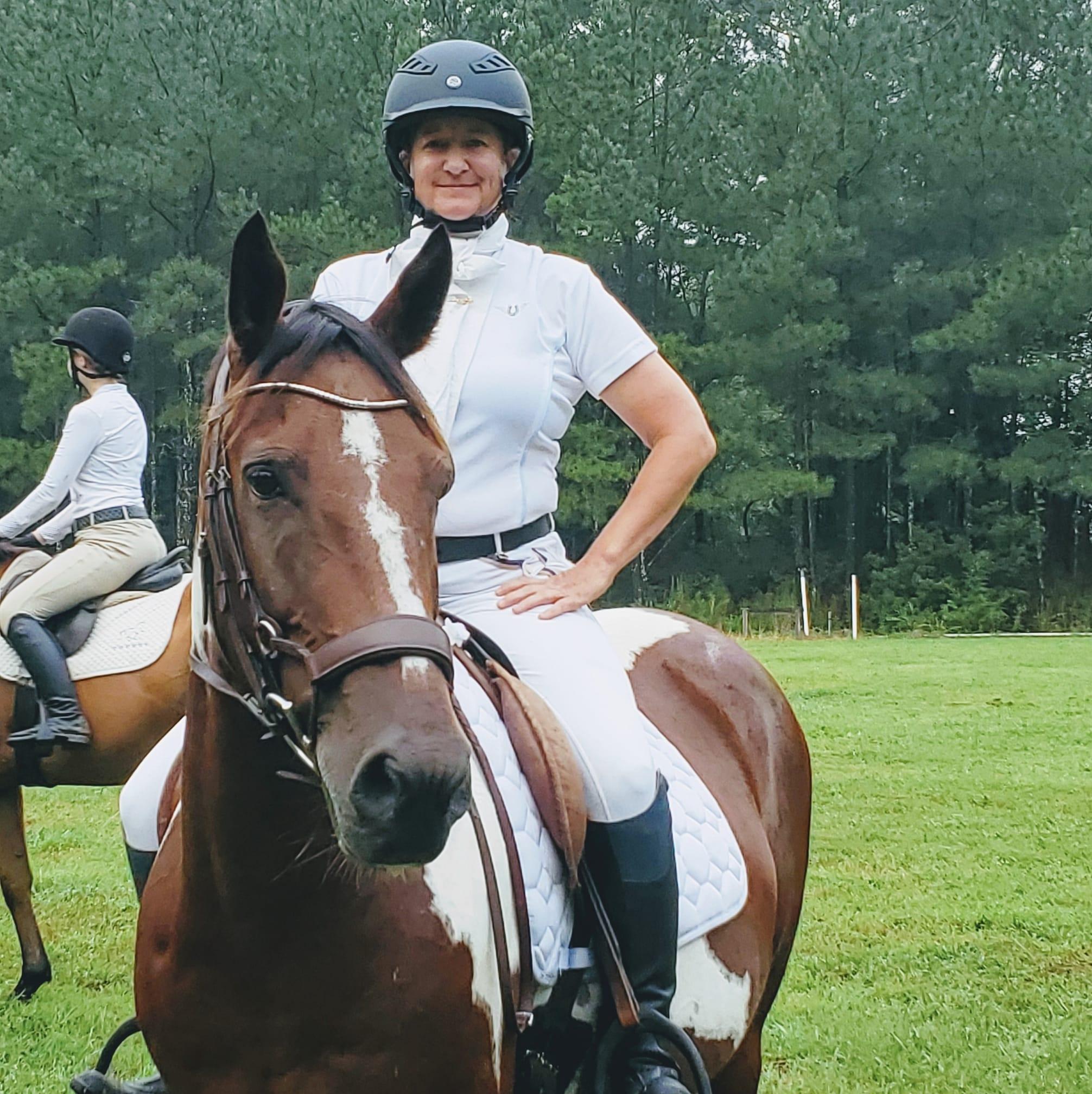 What kind of rider are you? Photo by Kelly Burns.

So now I am riding with an ever-evolving level of awareness — not only positioning my body, but using my breath and catching the very thoughts that would tie me to the story of the scared rider. Leaving this story and title is not a linear process. If I drew it for you it would be a trail-map-flow-chart-role-playing-game hybrid full of obstacles, sun streaked piney trails, superstitious proverbs, tragic weeping, monsters disguised as love or rocks, lost hit points, arenas drawn with red clay and sweat, midnight carrots and tipsy pasture promises. It is certainly worth the trip, as even the potential is the prize: if I’m not a scared rider, what kind of rider shall I be?

Jen C. Cleere is a metal artist whose studio overlooks the pasture at Prize Turnip Ranch, a farm she owns with wife Kelly Burns, professional horse trainer and private eye. Jen makes keepsake and memorial jewelry and ID tags (for horses, dogs and humans, oh my!). She keeps Alpine dairy goats, loves cheesemaking, gardening and all of the homesteady aspects of farm life. Since 2005 she’s been an Eponaquest Equine Facilitated Learning Practitioner. Find her jewelry on Facebook and Instagram @byandbyart. And you can order tags from www.fetchingtags.net!