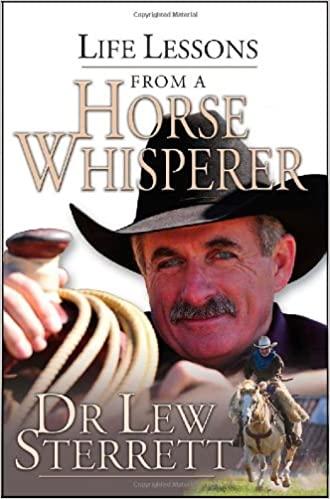 I must say, this was a fabulous read. Dr. Sterrett shared many life experiences that relate to any horse person out there. He shares the good and the bad. Some experiences are related to horses while others relate to family, relationships, work and religion. Aside from the many horses he discusses and the plethora of examples he uses throughout the book, I was excited to read that he was also from Pennsylvania. That’s a brownie point for me!

In his first chapter, he discussed the importance of gaining a horse’s trust. He explains this more in depth by using a couple examples. One example that I particularly liked was a story about when one of his horses got his leg tangled in barbed wire. This situation worked out in Dr. Sterrett’s favor, but not all the stories he tells has a positive outcome.

One of the many reasons some situations didn’t work out for Dr. Sterrett was because of his anger and frustrations. He discusses the anger and frustration that he had early in his riding when horses didn’t do exactly what he wanted them to do. Throughout this book I respected his honesty with these types of issues and how he dealt with them in an undesirable manner.

Dr. Sterrett’s ability to share circumstances that others wouldn’t consider discussing is another reason the book was such a good read. He discusses his home life growing up, which wasn’t an optimal upbringing and how that correlated with how he was acting with everything else in his life. This brings him into the reason he got into horses in the first place.

Opportunity. That’s covered in depth in his book. He discusses opportunities he’s received over then many years he’s been in horses and how it got him to be the horseman he is currently. One of these opportunities leads him to a horse camp where he meets the woman he makes his wife — a woman who changes his perspective on everything. He tells how he went from wanting a career in training show horses to doing a 180, going into ministry and running the camp composed of “plain horses.”

After discussing his opportunities, he discusses traits that have helped him with horses as well as people. Dr. Sterrett took over the horse camp at a time in which the horse camp was in jeopardy of closing its doors due to lack of funding. Dr. Sterrett discusses how he turned the camp around and what it took. He emphasizes the importance of being a better listener, listening to the both horses’ and the staff’s needs to be successful. He also discusses the traits he’s learned over the years to be an effective leader. This is exactly what the camp needed to get out of the hole their were in.

One way in which Dr. Sterrett aided in raising money for the camp was doing, “Sermon on the Mount.” Dr. Sterrett spent time going to churches and conferences with his horses, or he asked for volunteer horses to get different messages across. He offers several stories of how he was able to get a message across utilizing the training of horses. While he discusses many of his strengths during these stories, he also touches on his weaknesses and how he’s reached out for help to become better.

There are so many stories and examples he gives to really motivate the reader and get his point across. If you don’t like the sound of any of what was just mentioned, the book comes with pictures of him and some of his horses, you can flip through and see some of the amazing things he’s done with the horses he’s come in contact with.