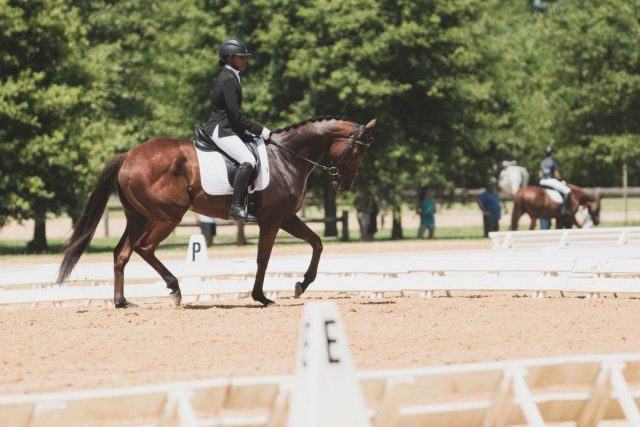 September 2, 2020DeAnn SloanSally SpickardComments Off on How Bree Brookins Found Her Stride

Bree was under the impression that Black girls simply didn’t ride horses. Moving to North Carolina in search of a new barn family, she says she encountered more than a little racism, both direct and indirect. 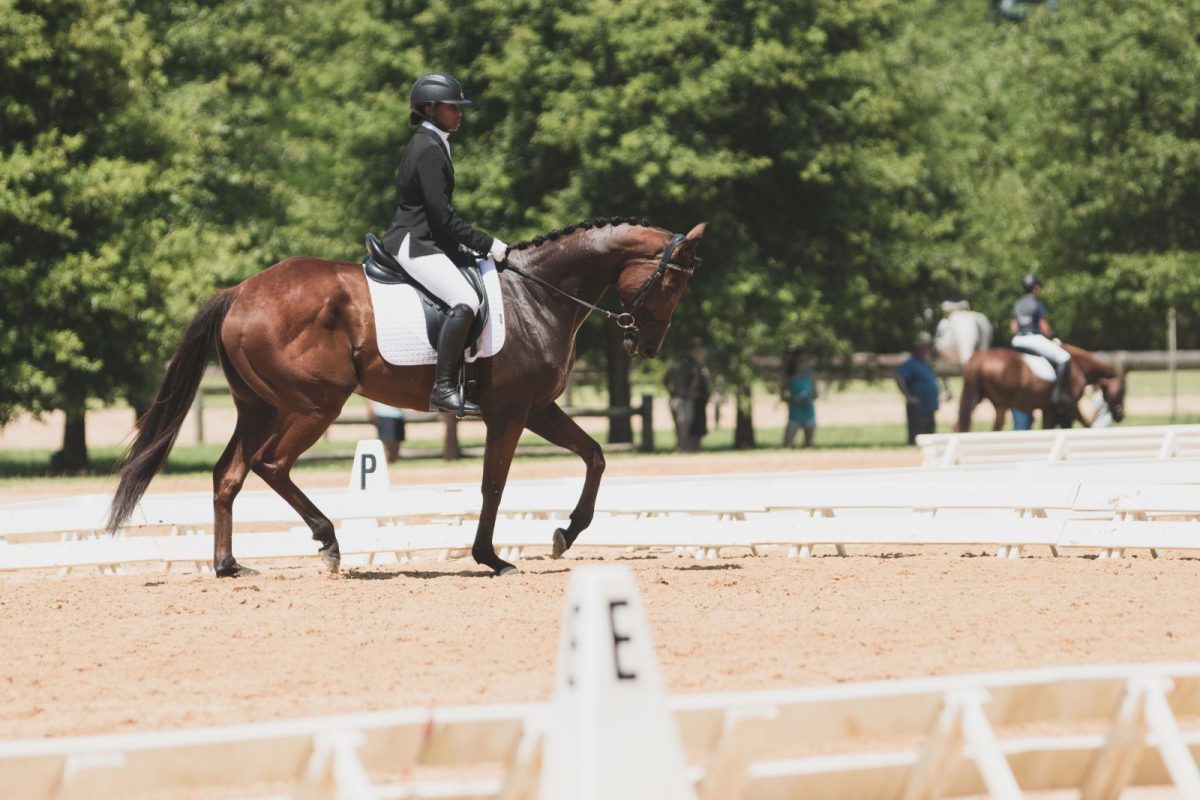 The first time Bree Brookins rode her new horse — the first horse she’s owned herself — she found herself overcome with emotion. After remaining calm throughout the whole trying and buying process, during her first ride with “Gambino,” the floodgates opened.

“I just bawled. It was insane. Sometimes I still have those moments,” Bree muses as she reflects back on her first days with the OTTB war horse she now calls her partner.

Bree had another of those moments in July of this year, when she took Gambino to his first competition as her horse. “I honestly never thought I’d be in this position,” she wrote on Instagram. “I grew up loving horses from a distance, closest I could get was TV and a few trail rides over 20 years … I think I cried a total of seven times over the weekend.”

Horse ownership has been a goal Bree’s, 23, for many years. She’s spent most of her life in love with horses, but only recently was she able to begin riding in earnest. “I didn’t ride as a kid, my parents just couldn’t really afford it,” Bree recalls. “When I was younger, I would mostly watch Saddle Club. I was absolutely hooked.”

Bree’s father was military, which meant moving around every couple of years as his postings changed. Every now and then, her father would meet someone with a horse and take her to see them. “I would just stare at them,” she laughs. “That was my intro to horses.”

It wasn’t until 2017 when Bree found herself with a bit of extra time when her work allowed for some freedom. She felt the horse bug itching at her again. This time, she was ready to take the next step. She pulled up Google and searched for an equestrian center near her, emailing the first result on the list.

“I had no idea what I was doing,” she explains. “But I went out and April (Salta of High Standards Equestrian in Maryland), the barn manager who would become like a big sister to me, asked if I wanted to be a working student to work off lessons. I didn’t know what crossties were, how to muck out a stall — nothing. She really took me under her wing.”

After relocating to North Carolina in 2017, Bree began her barn search over again, this time with mixed results. It can be hard to leave one barn family in search of another. “I didn’t have the easiest time landing in the horse world in a new state,” she says. “I had really high expectations. And that’s OK, to experience other lessons. I’m thankful for the good and the bad experience I’ve had.”

It was through her new coach, Jordyn Dunson, who Bree was eventually introduced to War Pipe, the 6 year old former racehorse with 26 starts under his belt before retiring. He was a solid citizen, and Jordyn knew that “Gambino” might just be the horse that Bree was seeking. And it was – as Bree remembers that first ride well. It was an instant connection, she says, something she hadn’t yet felt with a horse.

“I’ve leased many horses and don’t get me wrong, I’ve loved each of them. But having your own and being able to say, ‘Ok, these are my goals. This is what I want to work on. And it’s completely up to me.’ That’s really liberating.”

Cue the tears on that first ride as an official horse owner, a notion that to Bree was foreign and out of reach just a few months earlier. Nursing school, full-time motherhood, and a job at Duke University’s medical center keep Bree busier than many. I ask if adding a horse to the pile has been difficult.

“I’d be lying if I said it wasn’t difficult,” she answers. “I’m exhausted a lot. But whenever I’m done with one thing, I always tell myself, ‘almost there’. I come from a naturally busy family, so it’s second nature to us.” 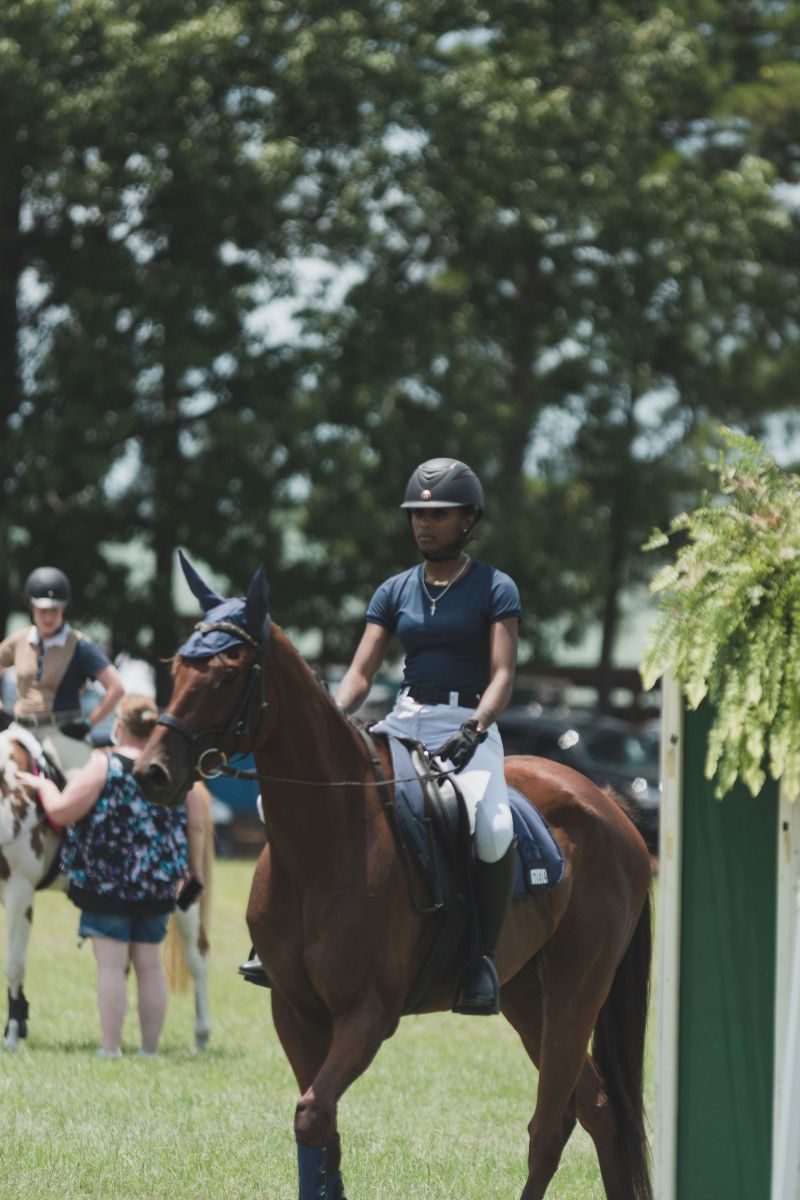 ‘I Thought I Was Done’

In light of the recent and imperative conversations that have swirled about the horse world regarding diversity and inclusion, I asked Bree for her perspective as a Black equestrian.

“At first, I was the only Black girl at my barn. Everyone was amazing; they didn’t treat me any differently, but I seriously thought I was one of the only Black English riders,” she explains to me. “I go to shows, I don’t see any other Black girls, so I was like, ‘I must be the only one!’”

As a result, Bree was under the impression that Black girls simply didn’t ride horses. Moving to North Carolina in search of a new barn family, she says she encountered more than a little racism, both direct and indirect. “It was hard. I was searching so hard for that connection that I went to seven different barns,” she recalls. “I took a break for several months and didn’t ride. I told my riding clothes. I thought I was done. The experience took the love of the sport right out of it for me.”

Thankfully, Bree says she’s found a new barn family after her searching. Working with Jordyn as well as Genevieve Andrews, she says she feels ready to tackle her goals now with Gambino, one step at a time, no matter what the obstacles are.

It’s tough, Bree says, to show up to an event wearing inexpensive gear, on a horse purchased for much less than many others. It’s even tougher when your skin is a different color and you are one of, if not the, only person who looks different from the majority of competitors. “Even if people don’t mean it wrong, they still stare.”

But to talk to Bree about these issues is to hear how much she appreciates the opportunity to be that person, the Black girl representing other Black girls who want to become riders. For her, it’s an opportunity to show others that yes, they can also participate in the sport she loves. “If I as a child could have seen a Black girl riding horses and pushing through, that would have been such an inspiration to me,” she says. Now, she receives many messages from other riders of color voicing their appreciation for seeing themselves represented on her page. It’s a role she takes seriously and uses as fuel for her own passion.

“I want to give that inspiration to every person I can, no matter what color they are,” Bree explains. “There are little girls who can’t afford lessons. It is the most incredible thing, to know someone looks up to you. I feel like people underestimate the power of having someone to look up to.”

What does a more inclusive equestrian community look like to Bree? She says one way to start should be simple: just treat her normal. “I want to go to a show and not have it be a thought or a question,” she explains. “I’m here to compete and show like everyone else. I don’t want to be identified as anything other than myself, Bree. Not ‘the Black girl riding the horse’. People assume that Black people cannot afford horses, that we can’t afford to show – the list goes on and on.”

Bree also challenges brands and media organizations such as ourselves to step up to the plate and include more riders of color in their advertising and materials. It’s the collective effort of all involved is what will create a rich, diverse, and inclusive community for all to partake in. That’s what Bree pictures. And in the meantime, she’s proud to be here. She’s proud to be a representative of the Black community every time she sets foot in the stirrup. “I’m here and I’m going to give it everything I’ve got. It’s a nice feeling to leave proud of yourself for showing people that you’re here, and you’re not going anywhere.”