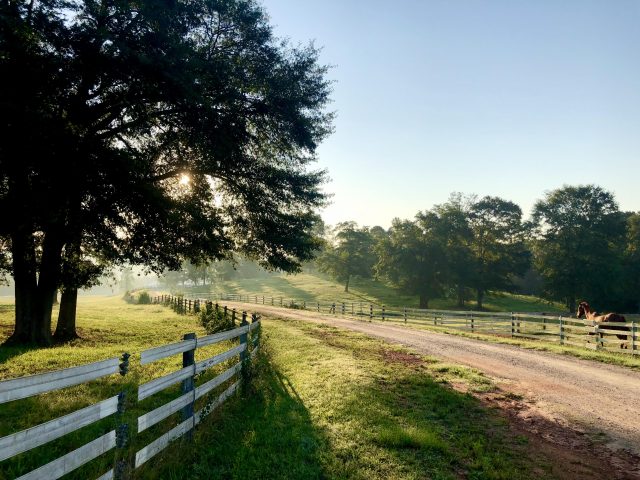 August 27, 2020DeAnn SloanContributor#RETIRED RACEHORSE PROJECTComments Off on Cinderella and the Thoroughbred: Aubrey & Boomer

“One way or another… aren’t most of us nutty Thoroughbred folks incidental ‘Cinderella story seekers?’ Many of these horses have stories analogous to gradations of sweeping up the cinders… many find the proverbial glass slippers in their second careers.”

Following the announcement that the Retired Racehorse Project‘s 2020 Thoroughbred Makeover and National Symposium, presented by Thoroughbred Charities of America, will be postponed to 2021, competitors have been working to decide what comes next for them and their mounts. Today, blogger Aubrey Graham discusses how most Thoroughbred owners are suckers for the Cinderella story (even if they don’t realize it).

When I first turned Fletcher (JC Reflection) out to free lunge, I had to laugh as the client standing near me gasped and “Oh my gosh”ed as he floated around the arena. The big, lofty plain bay is a resale project who came into my barn three months ago. He should have sold after that first free movement video or after he quietly packed through and won his first horse trial (Tadpole at Chattahoochee Hills). But… Fletcher sports a particularly damning bit of track jewelry: screws from a fracture in his right knee. 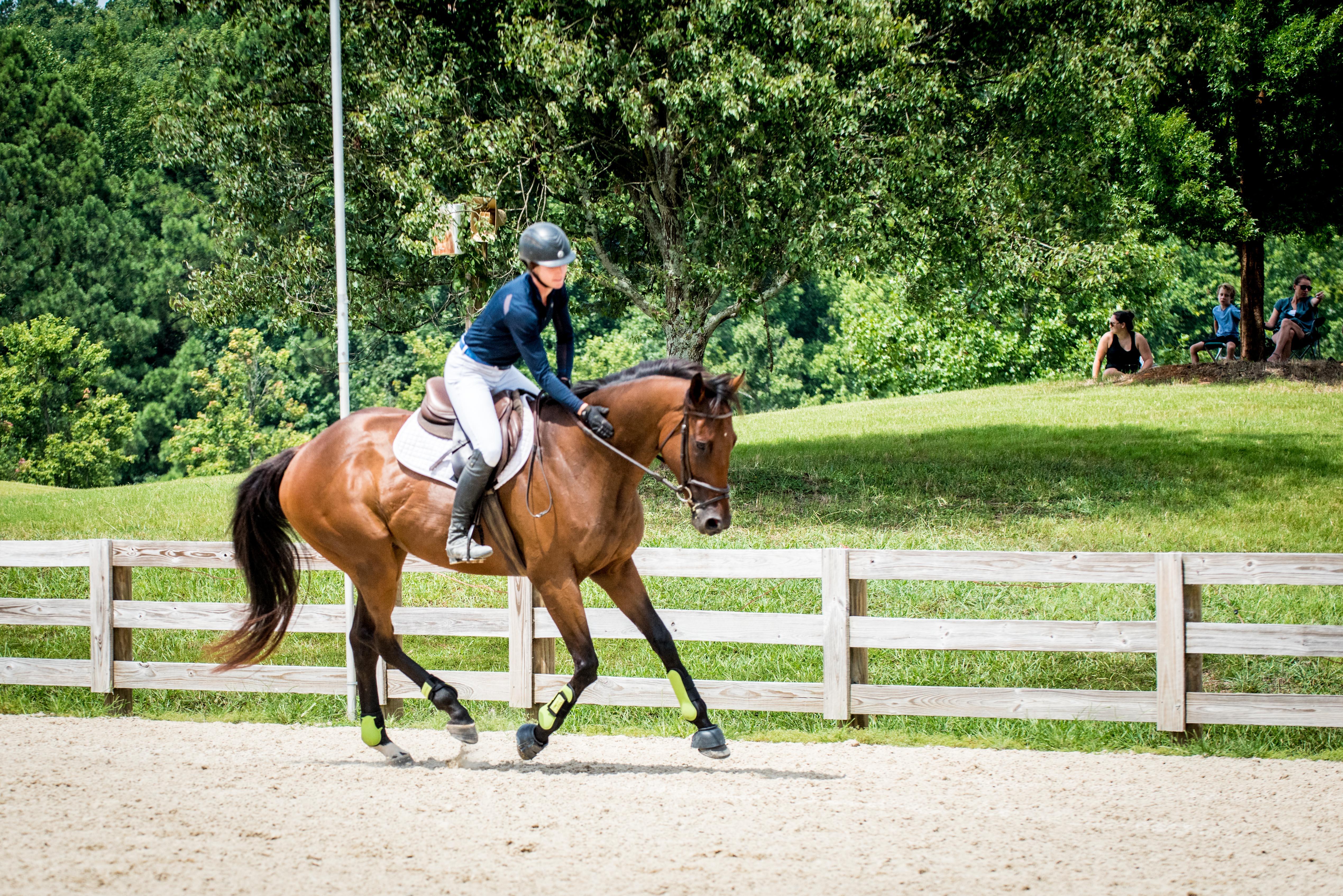 As I tried to figure out the best course of action with his sale, I leaned on fellow Retired Racehorse Trainers for info about the good, the bad and the ugly in selling horses with additional hardware. While folks had stories of difficult sales, giveaways and useful horses on lease, one comment in particular stuck: “Keep him. I’m a Cinderella story seeker […] I want to cheer you guys on from the sidelines.”

Here is Fletcher’s stadium round at Chatt Hills on Aug. 1, 2020. Video by Greg Lyon:

That got me thinking (and jumbling metaphors). One way or another, intentionally or not, aren’t most of us nutty Thoroughbred folks incidental “Cinderella story seekers”? Many of these horses have stories analogous to gradations of sweeping up the cinders: tales of rehoming, rescue, rehab, some of neglect and some simply of success-in-transition. Simultaneously kings of sport, Thoroughbreds also make the best under-dogs; many find the proverbial glass slippers in their second careers. And to continue to badly mix metaphors, for me, the chance to shine up that diamond in the rough is part of the excitement of retraining them and finding what makes them tick. 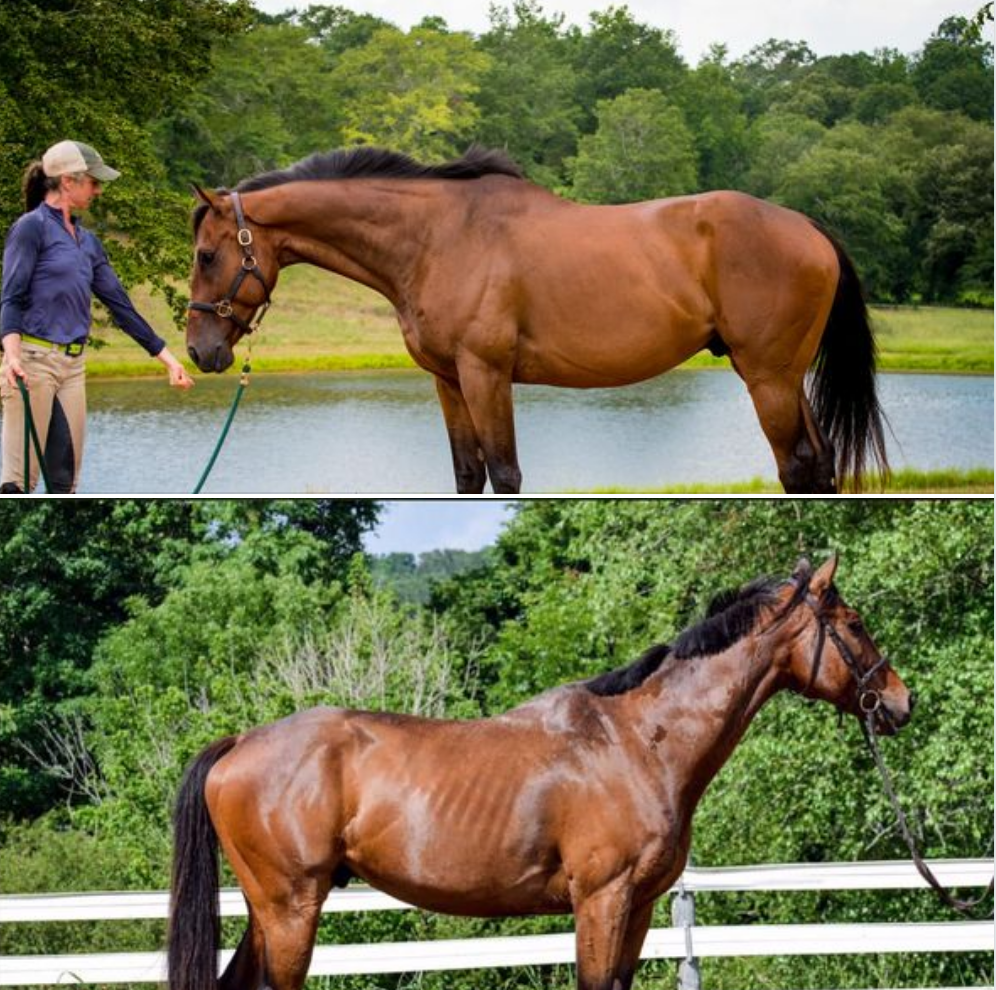 Fletcher depicted on arrival and after 7 weeks at Kivu Sporthorses. Photos by Alanah Giltmier.

I’m admittedly a huge nerd, and I find health/nutrition almost as fascinating as I find their retraining. The combination of getting teeth, body, coat, feed, feet, gut all figured out, and watching the often-goofy personalities come to light, makes for an exciting journey with each of these talented beasts. Fletcher, like many, came in at a fine weight for hanging out in a field sporting some skin issues and a bit of an acidy stomach. Seven weeks later, the change was nearly as exciting as how well he was doing under saddle. Screws aside though, Fletcher’s glow-up story wasn’t particularly unique.

Boomer’s (JC Vanderboom Ridge, 2020 RRP horse headed for the 2021 Mega-Makeover) tale follows a similar narrative arc. Before I owned him, Boomer had his stellar breeders (Winchester Place Thoroughbreds) to thank for a kind retirement. With his best interests prioritized over finances, they bought him back when he started to be run in lesser claiming races and retired him to a big field on their farm. The day we pulled him from the pasture and I decided to buy him, I showed his picture to folks from my then-barn. “You’re buying that?!” one scoffed. I’m pretty sure my response was, “Damn straight.” Hoping that what I thought I saw in the field-thin gawky 8-year-old was indeed there, I PPE-ed him, sent the money along and loaded him in my trailer. Muscle and a bunch of fat and fitness later, he shines with all the reflective quality of cut glass. 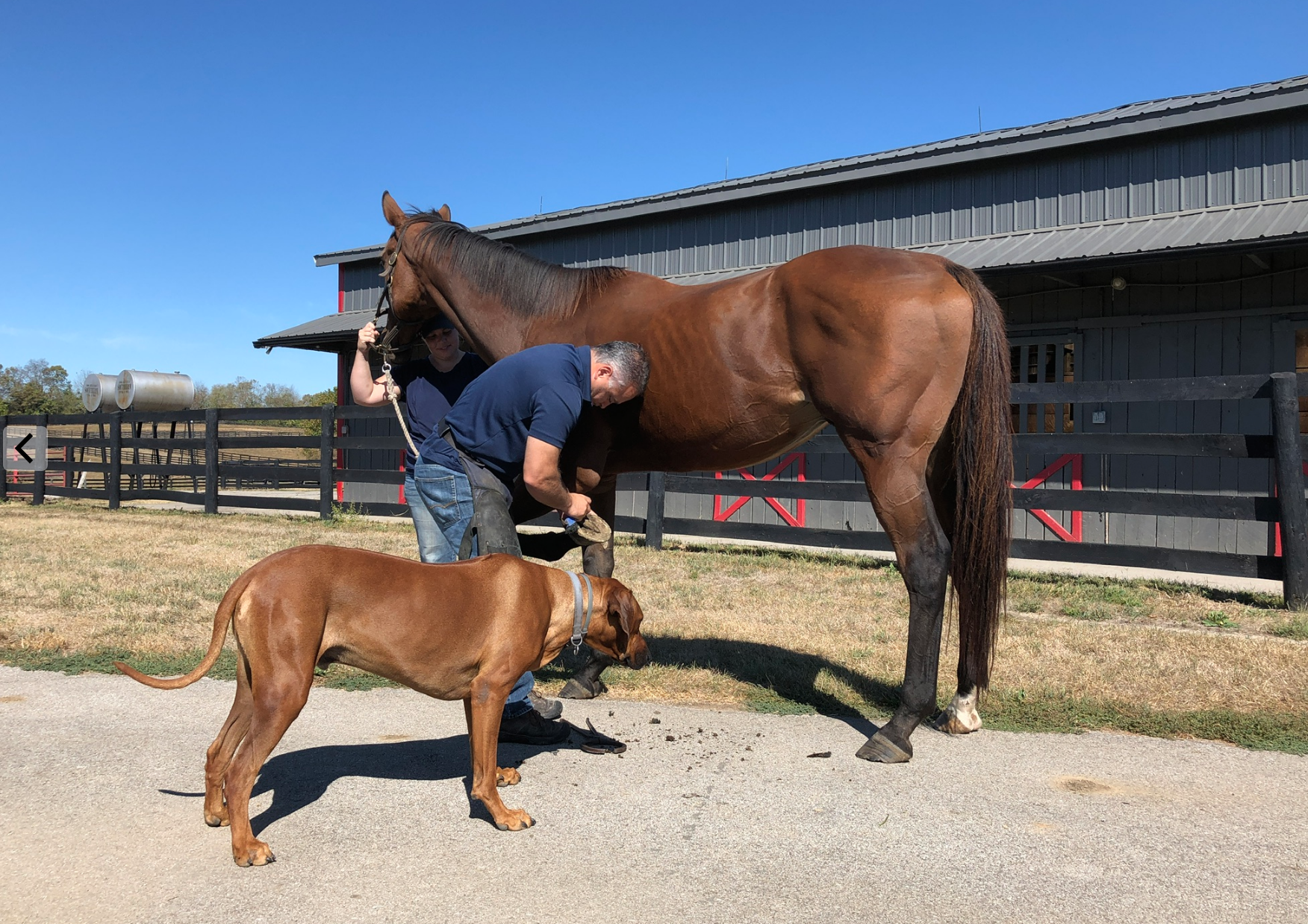 Boomer during his PPE at Winchester Place Thoroughbreds in October, 2019. Photo by Aubrey Graham.

I thought Boomer’s story was going to be one of turning a healthy, but field-rough, retired racehorse into a sleek, fit, eventing horse. But his trajectory was not a straight line from retirement to success. The pasture injury and healing timeline of his suspensory has thrown a detour in his ascent. And now, after two stem cell treatments and going on four months of rest, Boomer remains literally stalled midway in his own tale. 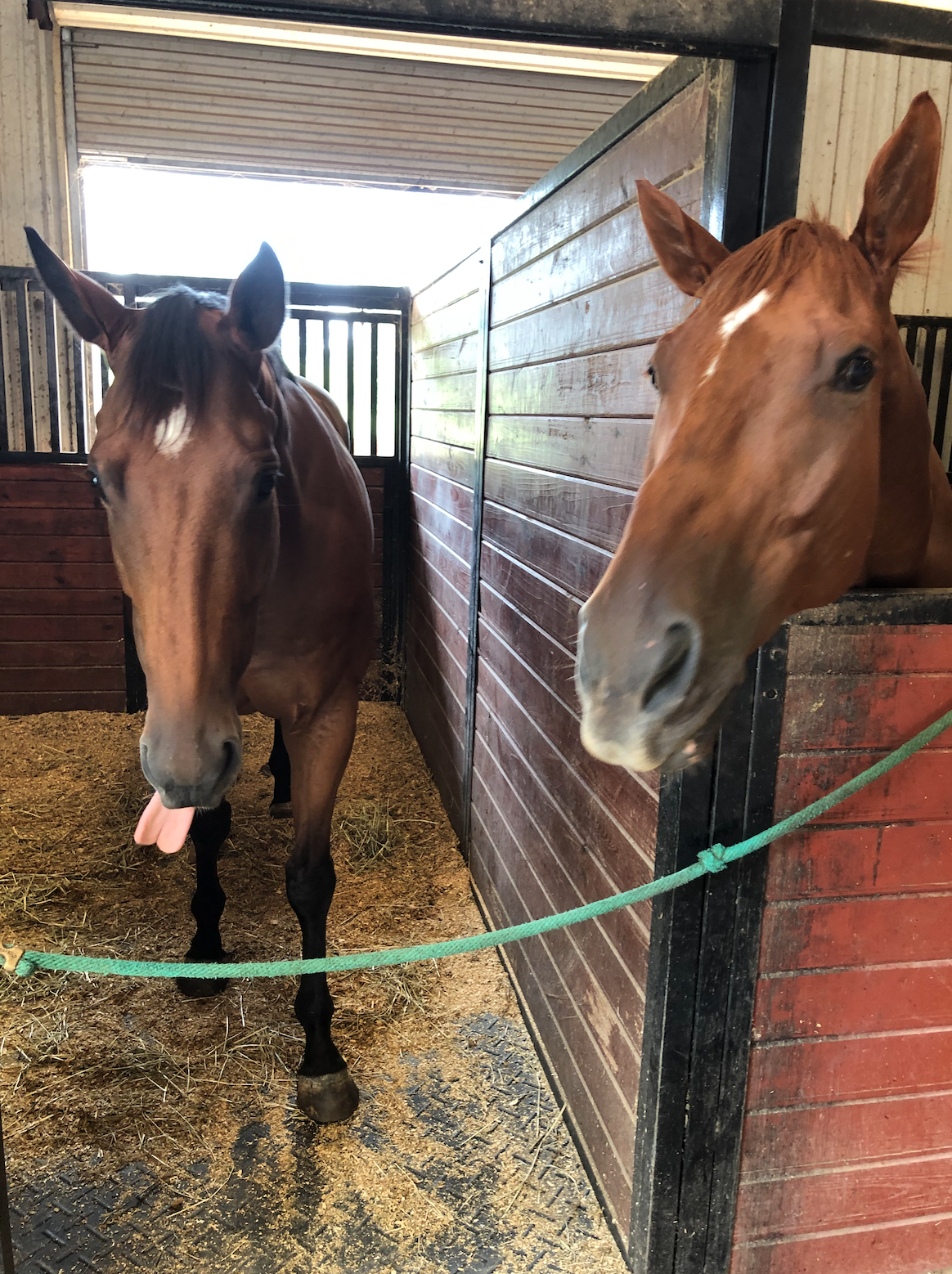 These two goons, Boomer and Forrest, enjoy their time stalled next to each other during Boomer’s layup. Photo by Aubrey Graham.

In the meantime, Boomer gets his entertainment from daily scratches, hunting for Juice’s shoes in the dark, playing across his stall guard and from following me around during evening chores. 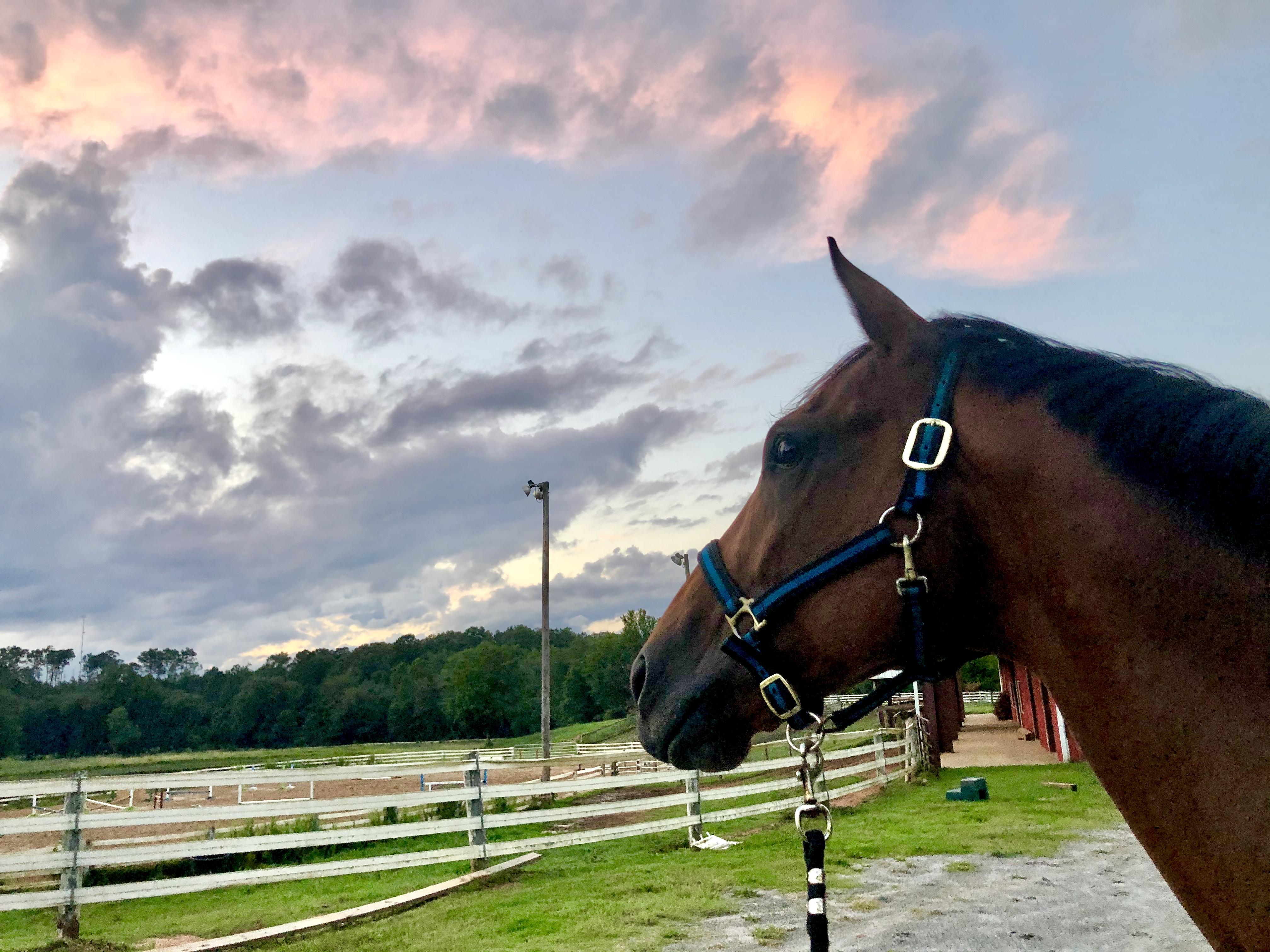 Boomer out and about with me during evening barn work. Photo by Aubrey Graham. 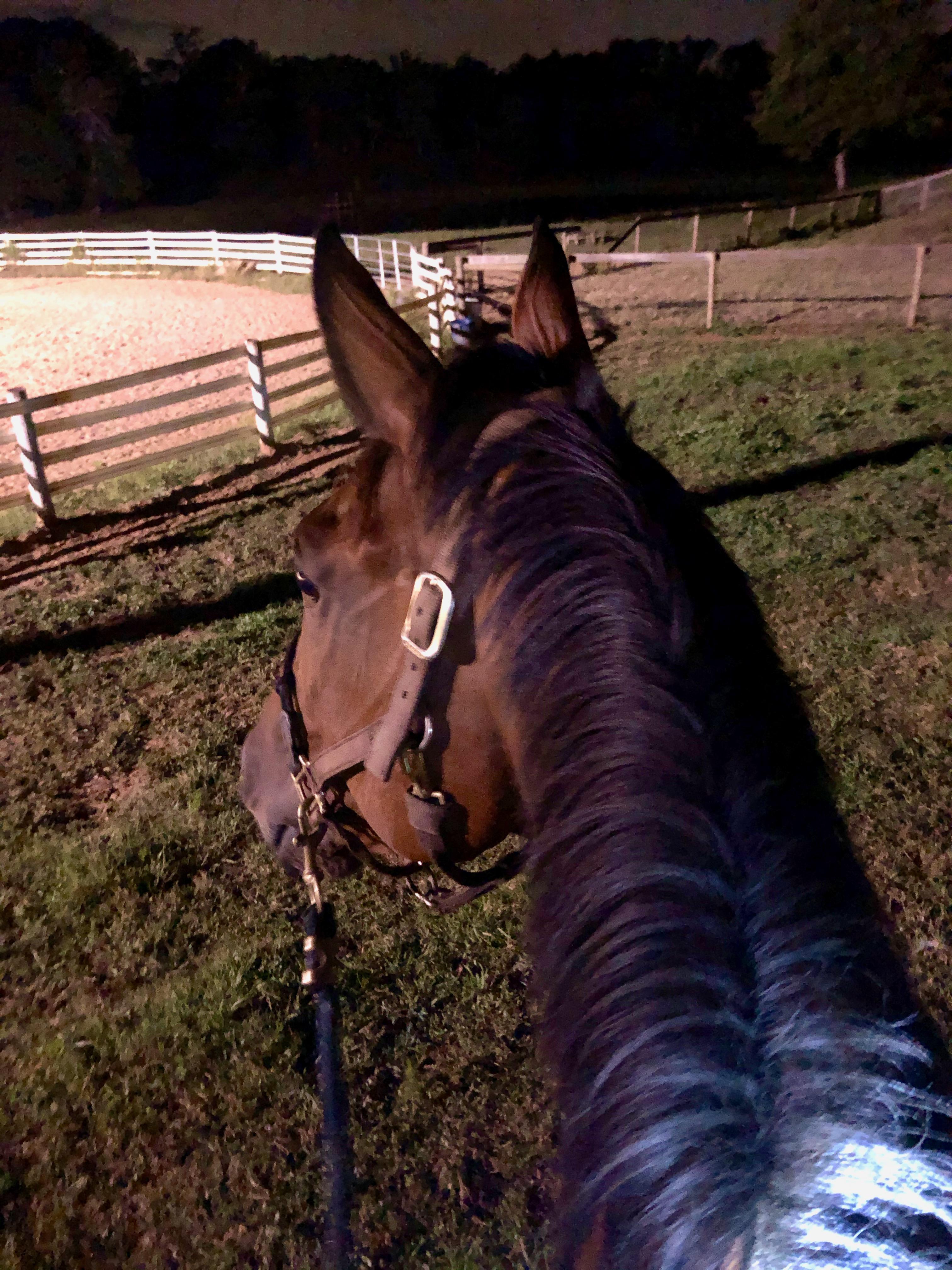 I love that with this horse I can swing up on him for a light night-time amble to go hunt for shoes, despite months of stall time. Photo by Aubrey Graham.

A recheck of that ligament in 30 days might bring the hopeful end of confinement. Suffice to say that once we get that all clear, this hunk of a horse will be on the measured rehab program of strengthening up enough to seriously pursue his next career and next year’s Makeover. Equally, I’ll be back on the standard hope-bound storyline buoyed by the persistent optimism that again, all the talent that I think is there, indeed is. 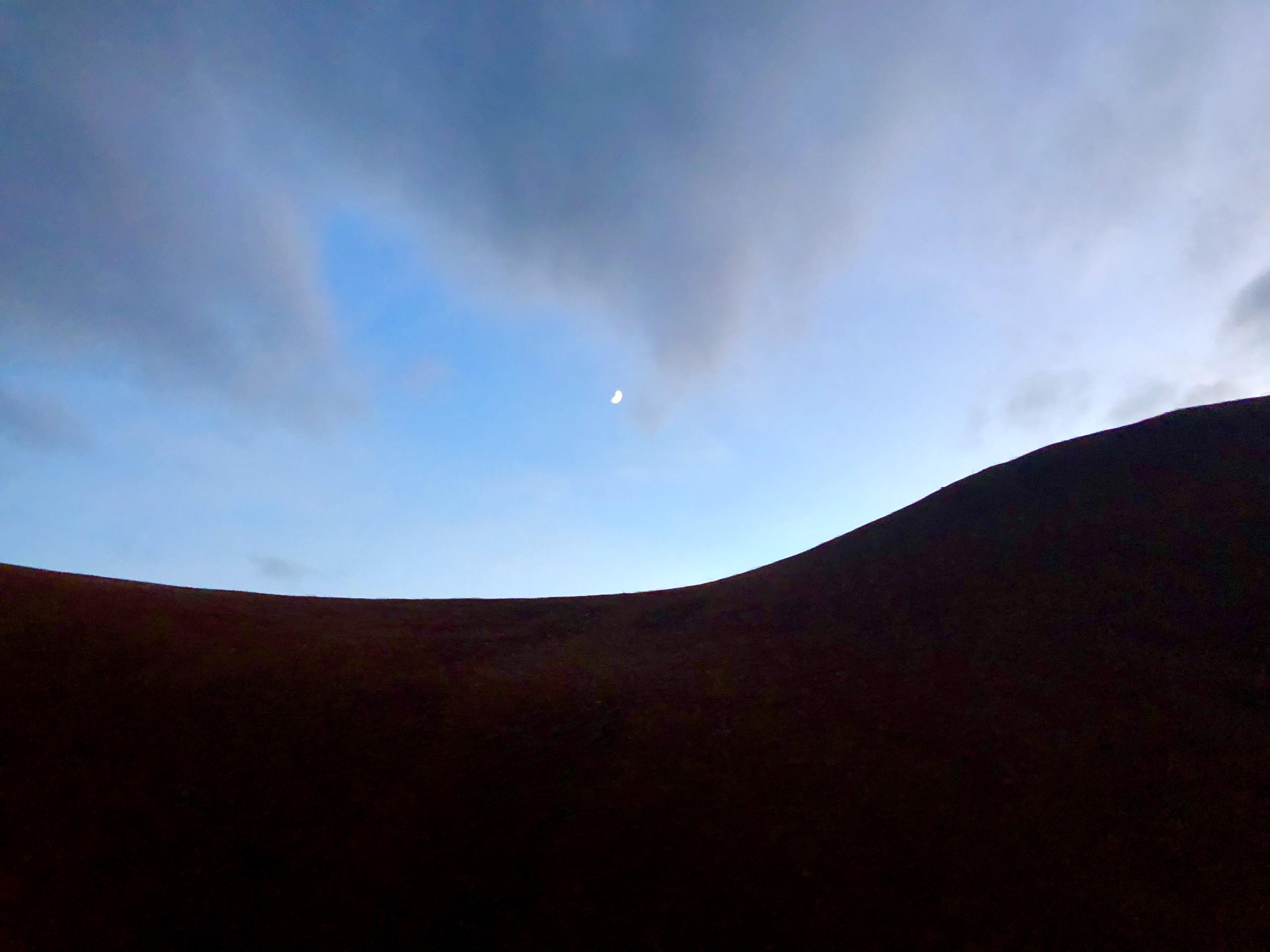 As I was doing stalls the other day, the broad-brush, (and yes, semi-inaccurate) application of this distilled Cinderella storyline hit home. I could go on to detail every one of the back stories of the OTTBs in my barn, watching them rise from the ashes (yes, yes, now we’re talking about Phoenixes, not Cinderellas… but both deal with ash, so close enough) of ended race careers (whether successful or not). The redundancy of that tale would bore most of you to tears.

But equally, I suppose I’m gunning for the same narrative arc. Sure, I’m an anthropologist, sure, I have other career options beyond training horses. But while reasonably talented at research and teaching, I soured to the computer and the office. During my last semester working at Emory, I would (at points) show up to host office hours and attend faculty meetings in my breeches straight from training at the barn (sorry students and faculty friends). Like the horses breaking slower from the gate, I needed the second career. I put in my notice and chose the challenge of training these four-legged beasts and running a sizable barn that luck later tossed on my doorstep.

The Cinderella metaphor certainly starts to crumble as one pushes through the day to day – the broken trucks, damaged ligaments, and always more bills to pay. But, as with Boomer, as with Fletcher, and as with the other many Thoroughbreds in my barn, I find it useful to believe that (to quote Disney) “with courage and a little magic” (and a damned huge amount of hard work), potentially fairytale-like endings might just be possible. 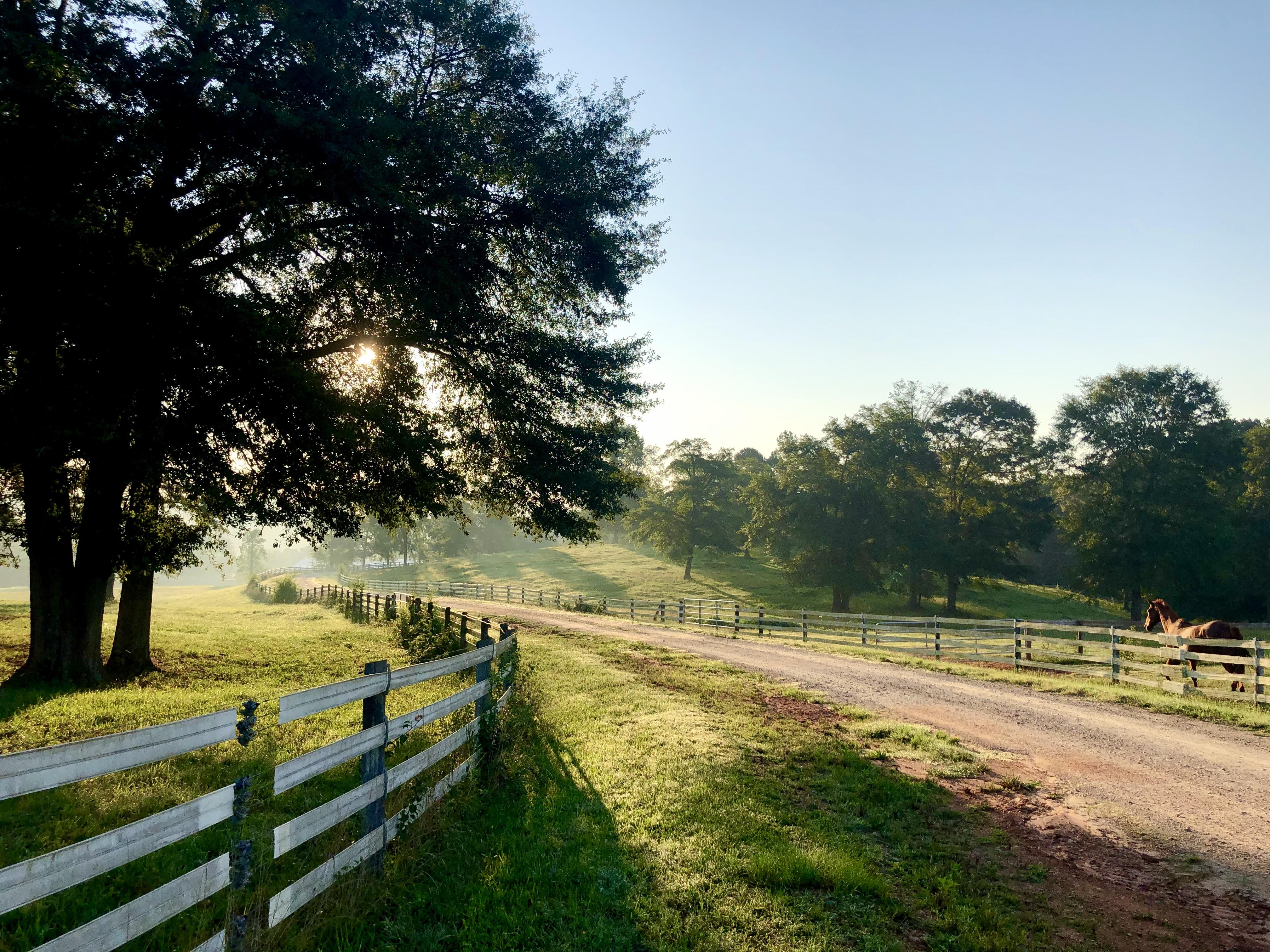 And frankly, when you’re lucky enough to get to make the most of land that looks like this, such endings ought to be possible. Photo by Aubrey Graham.