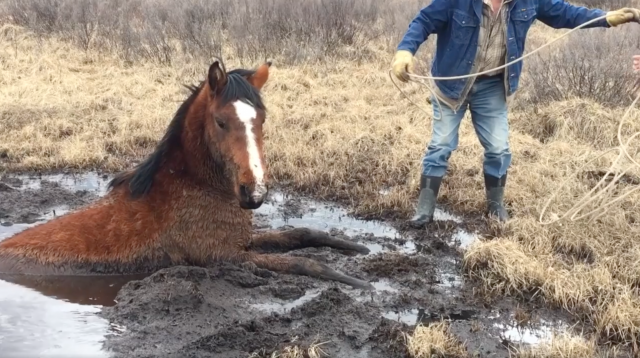 Every week Horse Nation teams up with Ovation Riding to recognize those doing good in the horse world. Today we recognize Help Alberta Wildies Society, which worked to save a filly that was starving and stuck in a bog.

In May, Darrell Glover, of Help Alberta Wildies Society, and his team were out looking for new foals outside of Sundre, a town northwest of Calgary in Alberta, Canada. They were on their way back with they spotted a filly that was stuck in the muskeg. The filly was 75% submerged in the bog. 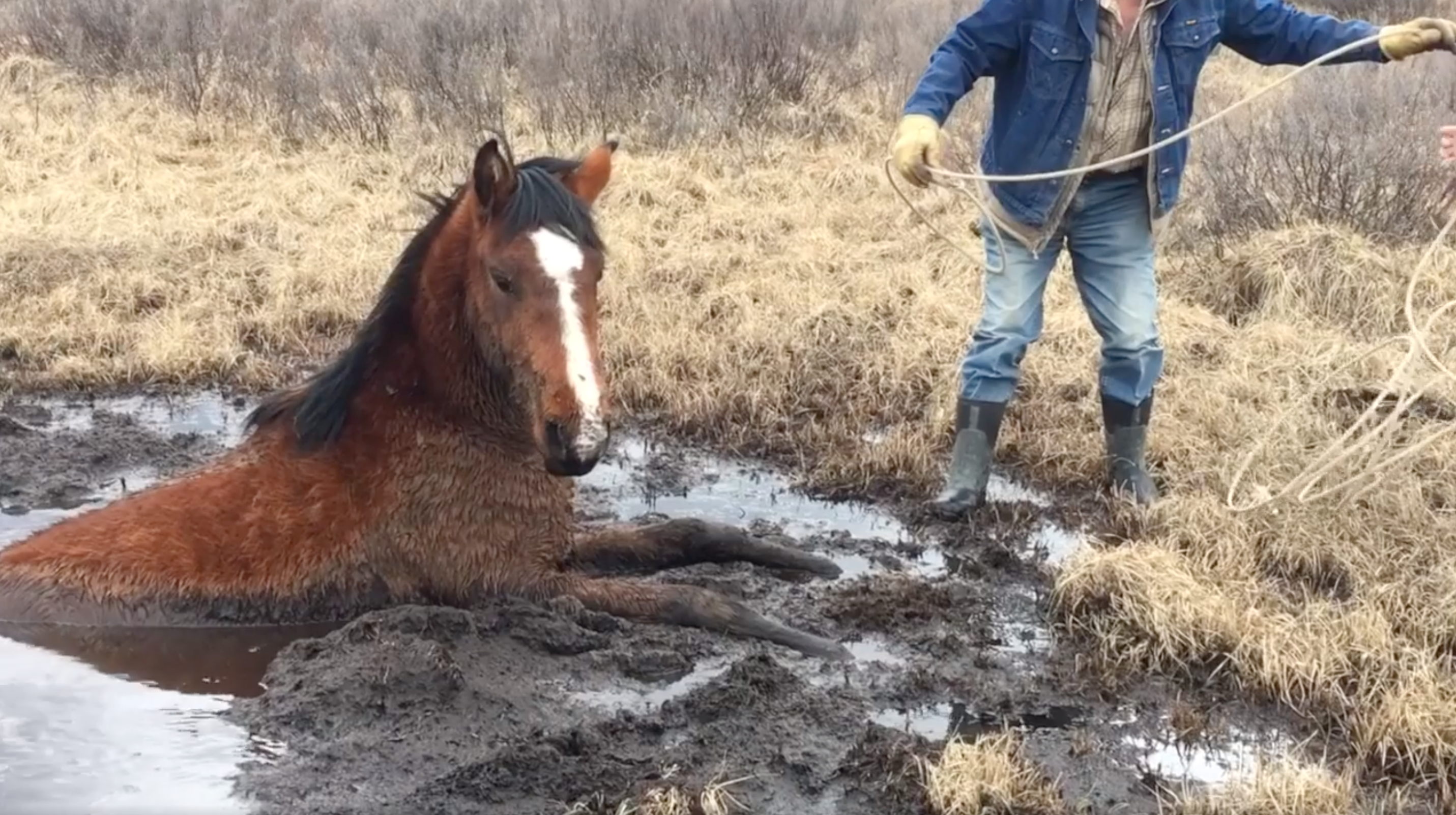 Glover said that it was pure luck that they team members found the filly, whose hind quarters and most of her back were submerged. “This was a first for us. We usually just get to see the bones of the previous victims, and there are lots of bones out there from horses stuck in the bogs,” Glover said.

The rescue took 45 minutes and required winches to free the two-year-old filly. Fortunately, Glover and his team consider winches part of their standard equipment when they are out checking on the horse population. The horse’s hind legs were embedded straight down in the deep bog and she was hypothermic by the time she was pulled out.

Although Glover indicated that the horse was in fairly good condition once they got her out, he did say that it “took a while for her to get her circulation going and get her back legs under her again.”

Although the wild filly was fearful of her rescuers at first, she adjusted quickly: “What she wanted us to do was pull her ahead a little bit so she could get some more grass,” said Glover. “She was starving. She had eaten everything within her reach when she was stuck.”

Even as they pulled her loose, she strained to eat nearby grass.

“We stuck around for almost an hour to make sure she was going to make it. She stayed within 30 feet of where we pulled her out and just continued to eat — she was that hungry.”

Glover said bogs develop in low lying drainage areas from the foothills and often contain underlying streams. Horses are drawn to bogs in the late winter and early spring to eat the grass left over from summer.

“They take advantage of the frost and firmness of the bog to get in there. Unfortunately, some of the spots aren’t as secure as others.”

He said bogs aren’t the only threat to wild horses. Spring foals had started to arrive, but throughout the year, horses die natural deaths from colic, starvation, injury as well as predators such as grizzlies and wolves. The rescuers felt fortunate to be able to help this horse since the society members found 10 dead horses in the past month and, five minutes before this rescue, they had to leave a dead filly that had a bear on it.

Here is an 11-minute video (edited down from the 45-minute rescue) showing the team working to save the filly’s life:

The Help Albert Wildies Society (HAWS) is a group of volunteers, that formed a resistance movement against annual Government culls of Alberta’s Wild Horses in January, 2014. They formed the group and this social media awareness page to keep the public informed about the real and current situations involving daily life of numerous bands of wild horses in the Alberta area. The group makes regular trips into the back country on horseback, ATVs and private aircraft to check on herd health and problematic situations. If you want to support HAWS, you can become a team members here.