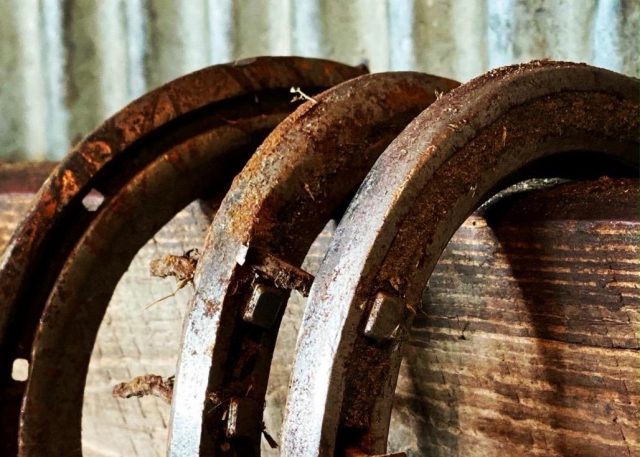 As we all grapple with a world turned upside down by COVID-19, competitors like Libby Henderson determine what it means for their training regimen as they work toward the Thoroughbred Makeover while still keeping themselves and their loved ones safe.

Following the announcement that the Retired Racehorse Project‘s 2020 Thoroughbred Makeover and National Symposium, presented by Thoroughbred Charities of America, will be postponed to 2021, competitors have been working to decide what comes next for them and their mounts. Today, blogger Libby Henderson discusses her relief as she prepares for the Mega Makeover in 2021.

At the end of the first week of July, my anxiety was high and rising. Over the last four weeks, Spider (JC name Gossamer) had only been ridden twice, and frankly, was a jerk. After July 31st, the trainer taking the horse to the Makeover is required to be the primary rider, and I was worried. 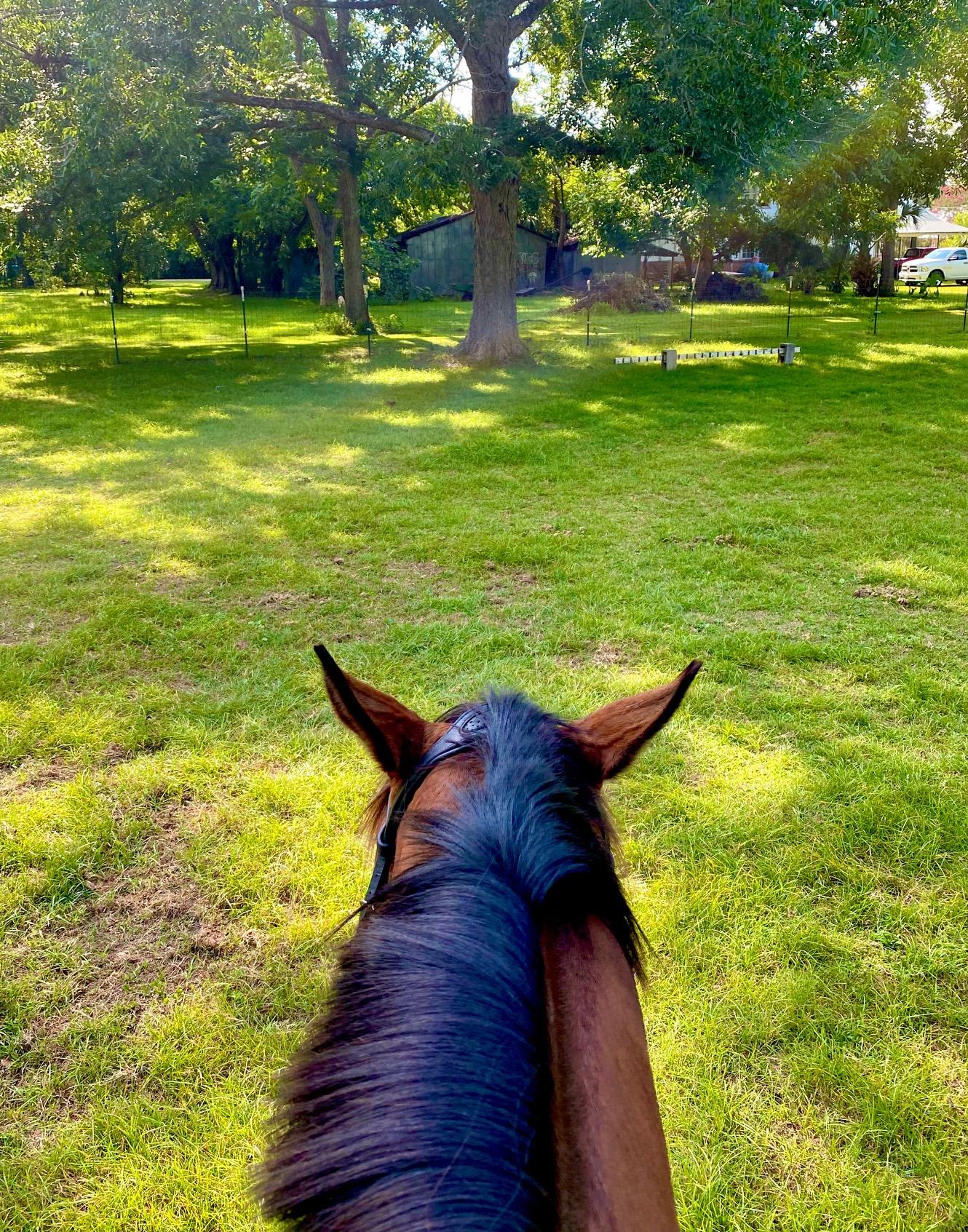 Spider during a rare ride in late June. Photo by Libby Henderson. 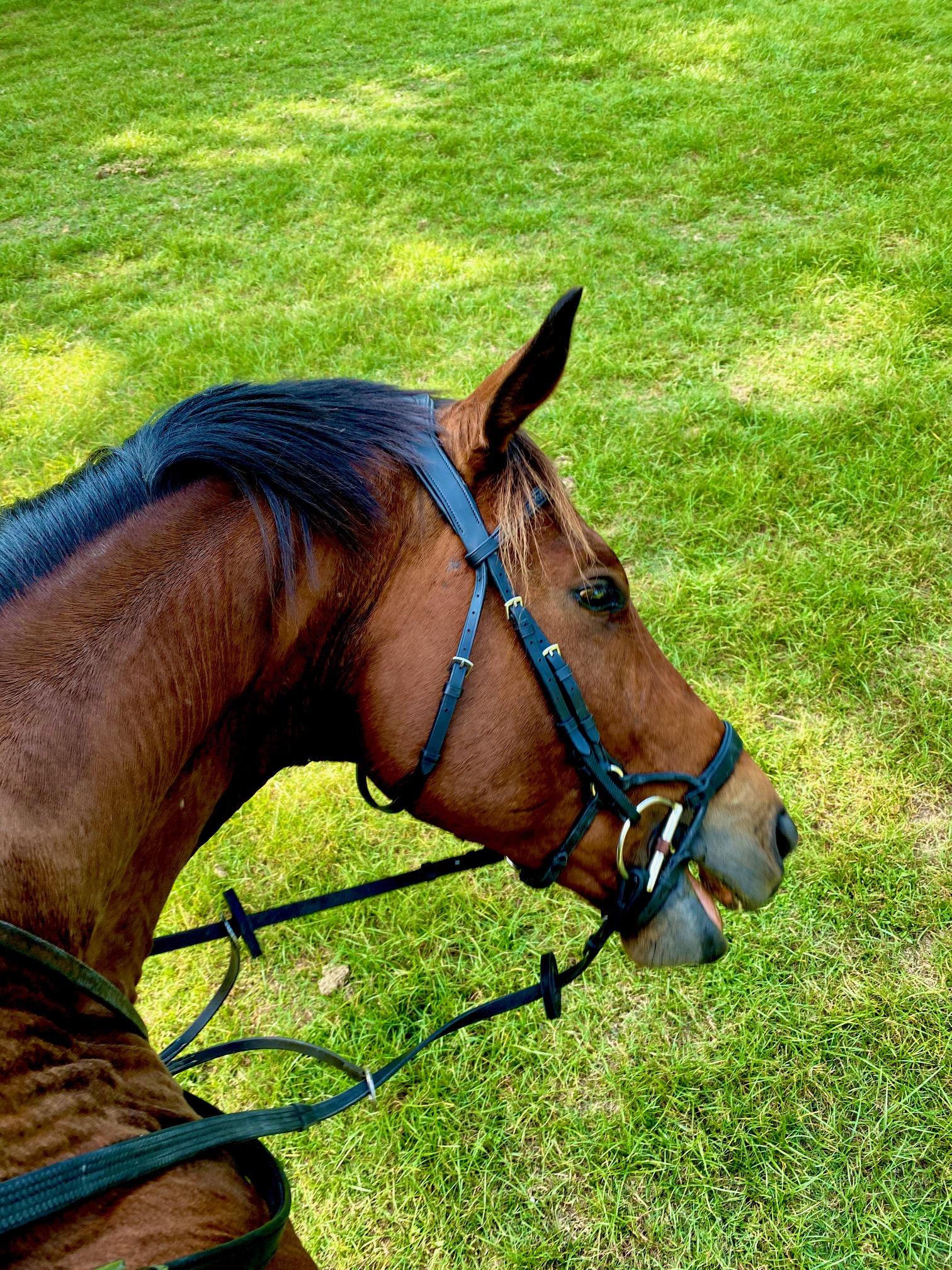 My motivation, which had been really high, had disappeared, leaving me feeling paralyzed. I knew I needed to make progress, but I was losing myself in work and in my other responsibilities. I used every trick I know of to get myself out the door and ride, and nothing worked. I know myself well enough to recognize when that happens, I am afraid, even if I don’t know what is scaring me. 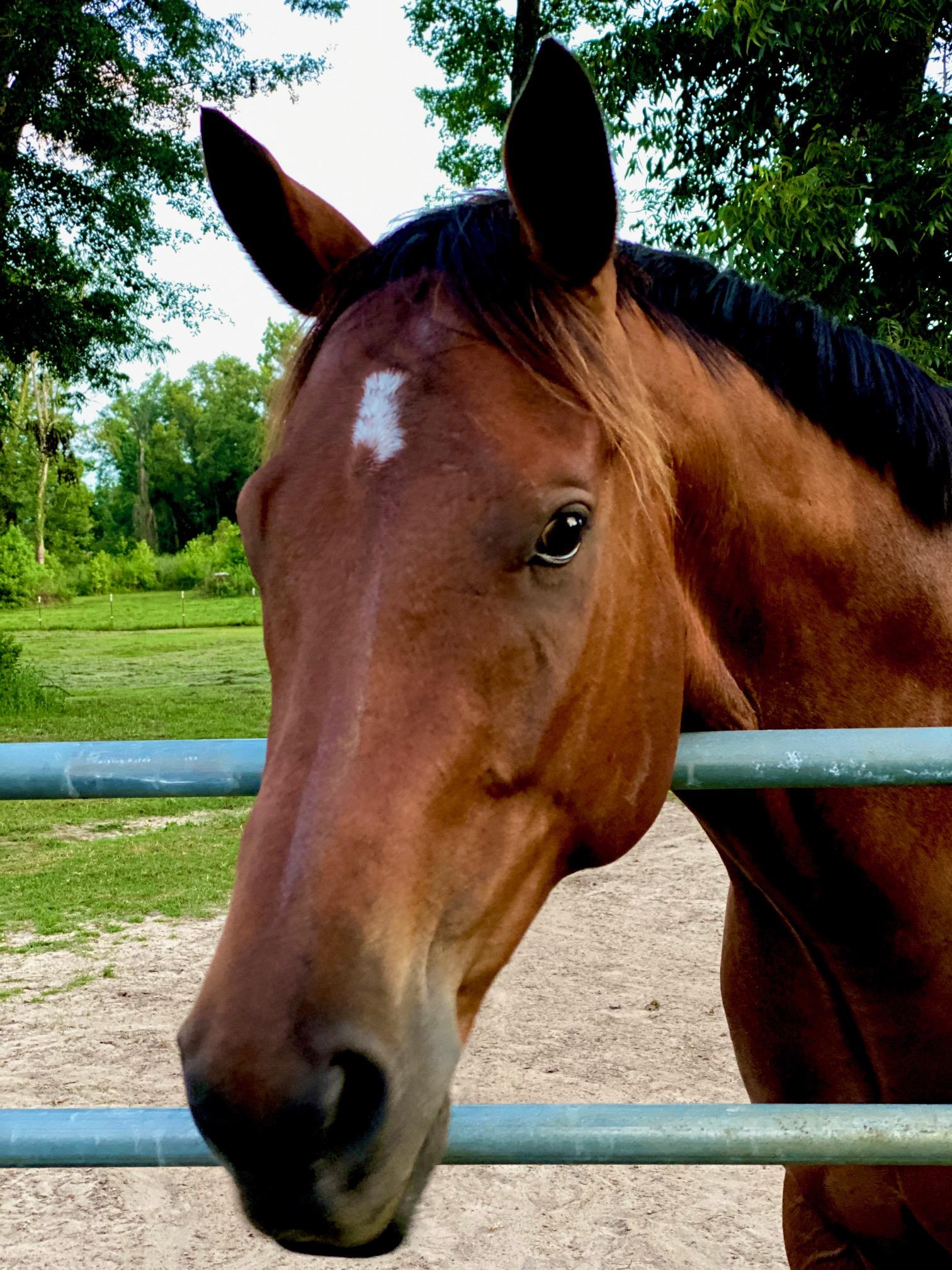 Spider giving me the side-eye for not giving him enough to do. Photo by Libby Henderson.

So, on Tuesday morning two weeks ago, I sat myself down and examined the problem. Am I scared of Spider? No, not really. I mean, honestly, no one likes a naughty horse, but he has shown himself to be more bark than bite (well, now that he has *mostly* stopped biting, that is!). I recognize that no horse is ever really “safe” – even the quietest one can still flatten you, after all. I thought about what could be scaring me – I know I can do this because I’ve done it before. I’ve made several horses in the past, and have always specialized, with one exception, in horses no one else wanted — always with issues. It must be something else. I deal with fear by shutting down and I knew that was what was happening.

If it wasn’t the horse, what was it? The week before, my mother, who lives one house away from us, called and told me she’d tested positive for COVID-19. And she was sick. She hadn’t been openly careless, but she had started to go with trusted friends to restaurants to dine in. Which seemed safe, as cases were going down back in June. Unfortunately, it wasn’t safe, and she and her friends were all sick. It isn’t fair to blame dining in a restaurant specifically, as riding in the car with a contagious person is also a great way to get the virus. She is fortunate because her symptoms have been mild. She ran a fever the first week and had some chest discomfort, but never developed a cough. She struggled with the feeling of total exhaustion, and told me last week that she didn’t think she’d ever feel normal again. She has been released from quarantine by the Health Department.

When she was diagnosed, I’d had very little contact with her over the previous two weeks. We determined that I’d only seen her for five minutes on my way to feed horses within the time frame. My doctor wouldn’t even schedule me for expedited testing because they were so certain I hadn’t been exposed. But, being unable to help her was incredibly frustrating. I could leave food outside on the steps, but I couldn’t go in and be able to see for myself how she was doing. This virus has always been scary, but now it was here, up close and personal. And there was nothing I could do to help or to make it better. Since then, her neighbor has been hospitalized with pneumonia and is positive for COVID-19, and a good friend from work has had it and recovered.

That Tuesday morning, as I talked it over with my trainer I realized that what I was so scared of, Makeover related, was the trip. Not only is it daunting to consider traveling more than 10 hours while scared of where it is safe to stop, but staying in a hotel and dining out for a week made me really nervous. Not to mention having the experience overshadowed by this darn plague. The Makeover is so exciting because there are so many spectators, a trade fair, demonstrations and competitor gatherings. Lexington is one of my favorite places in the world, and for part of the trip, I want to go on farm tours, visit tack shops and visit Keeneland. A trip to Lexington is my Disney, and the virus was going to cancel all of those things.

I was committed to not missing the chance to attend, though. I am unlikely to both stay married and be able to bring another OTTB home any time soon, so I need to make the most of this chance. I knew that the RRP directors and staff would make all the right decisions to keep everyone as safe as possible, but I was on the phone with my trainer discussing the safety of making the trip when an email dinged in my in-box from the RRP.

As most people know by now, the Board of the RRP made the decision to delay the 2020 horses until 2021, and next year there will be a #MegaMakeover, with the 2020 horses competing in a 2020 division. The staff have done a terrific job with covering all the bases, answering the questions and coming up with ways for trainers to be able to market their horses virtually if they aren’t in a position to hold on to them for another year.

I am unbelievably relieved and excited too! With more time, we will be able to get more done. My goal had always been to enter in eventing, but with the limited time and limited access to things this year because of the pandemic, I accepted that such a goal wasn’t reasonable. I haven’t evented since 2003, and have only seriously schooled cross country a couple of times in the years since, and a few months restricted by the pandemic just wasn’t time to get ready. 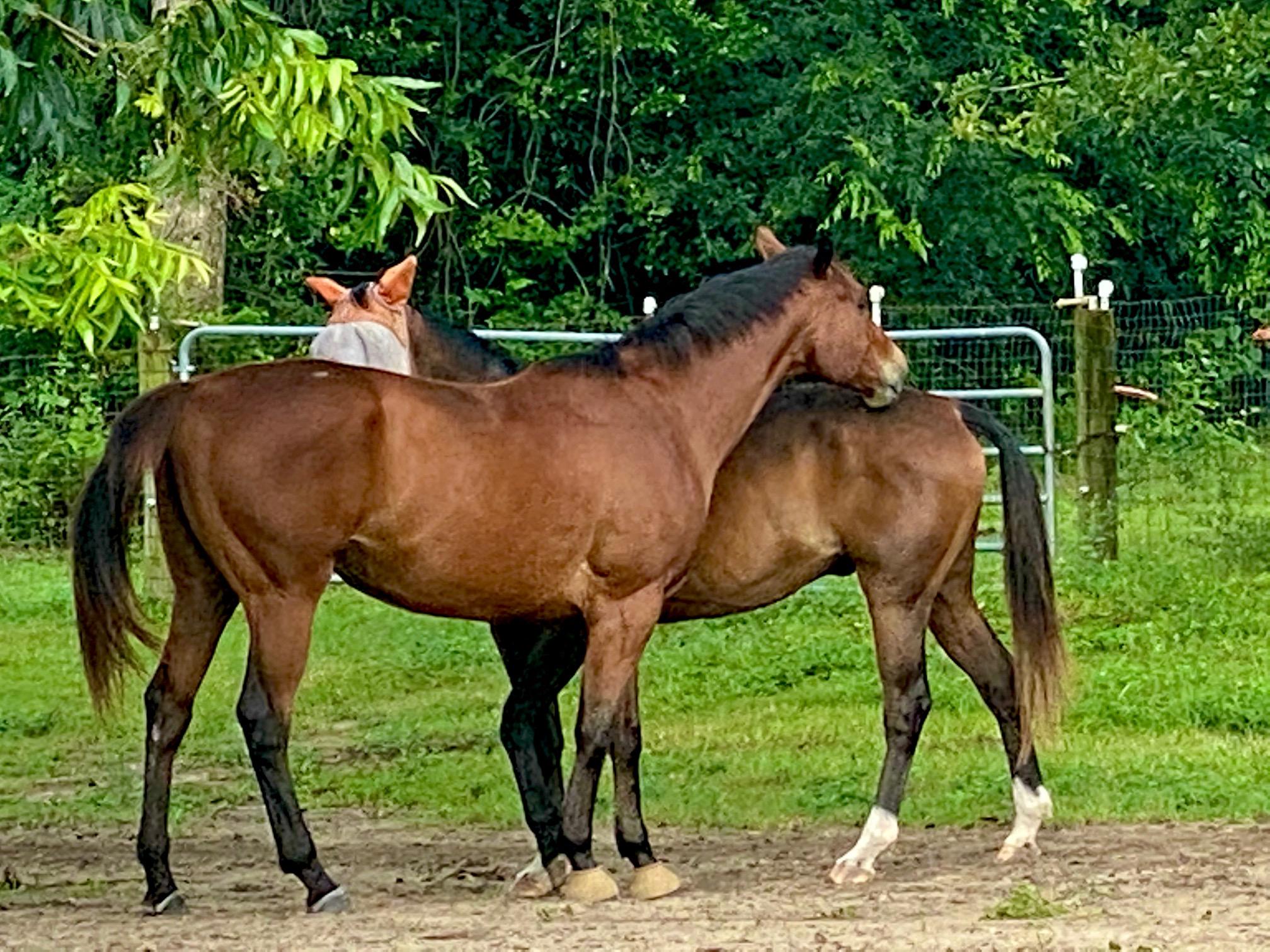 Spider and his buddy Taz, not worrying about Social Distancing. Photo by Libby Henderson.

Now I am so excited to try! I also realized that if the TIP Championships are scheduled to be the week before the Makeover, as they have been in the past, that we could plan to do both next year. So, I registered him for a TIP number, chose our first show for late September and made notes on how to get qualified.

My anxiety levels dropped immediately. Spider must have realized that, and decided to give me something else to worry about. He lost the same back shoe for the second time in eight days. A couple of days later, he lost a front shoe, and then had a mysterious colic over the weekend. The day of his reset, he sprung the other back shoe. Our vet and I were discussing what had caused his tummy ache and I think she summed it up best when she shrugged and said, “Horses. Sometimes you never know.” 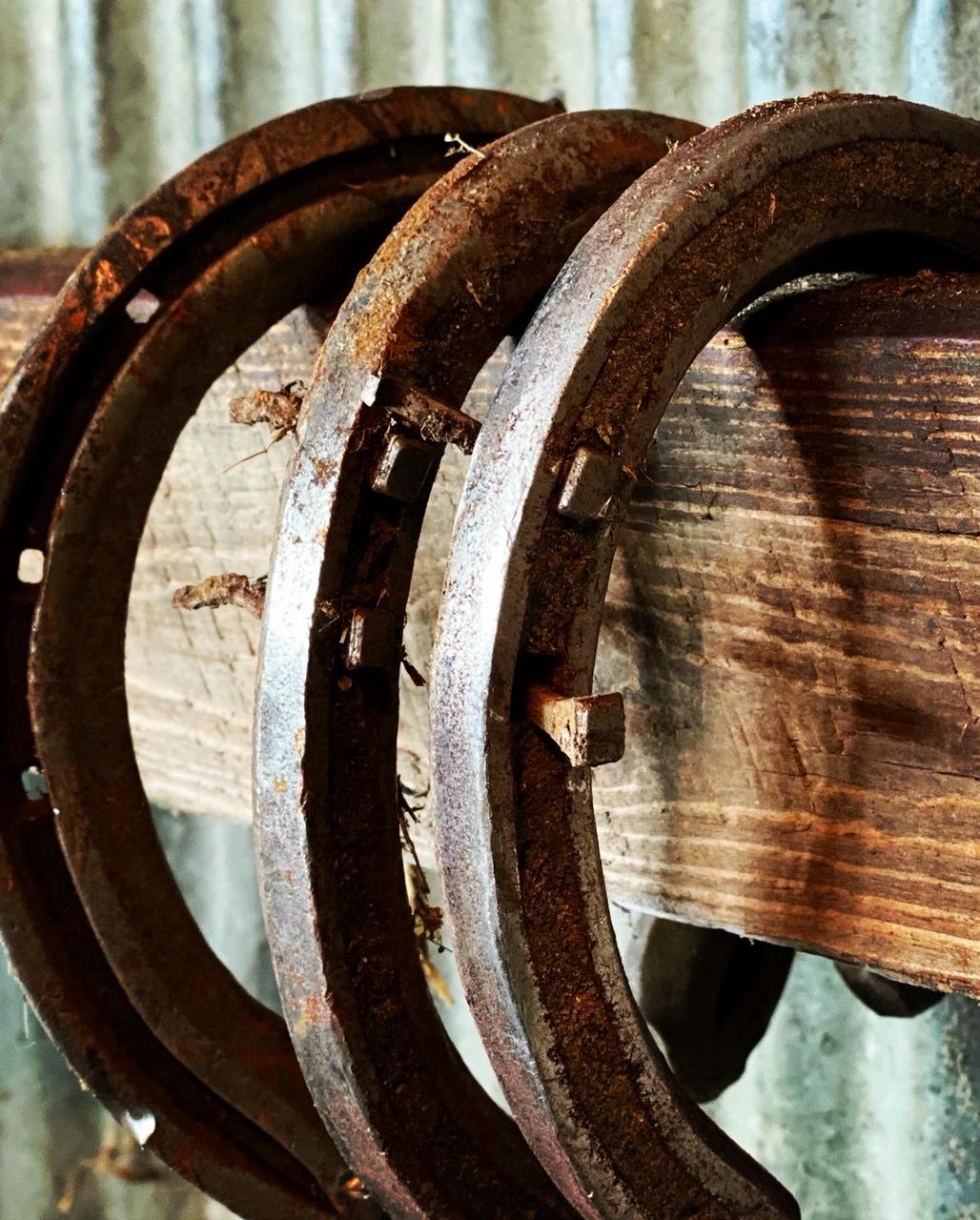 Spider’s collection of lost shoes from the last four weeks, minus the two his farrier has already put back on. Photo by Libby Henderson. 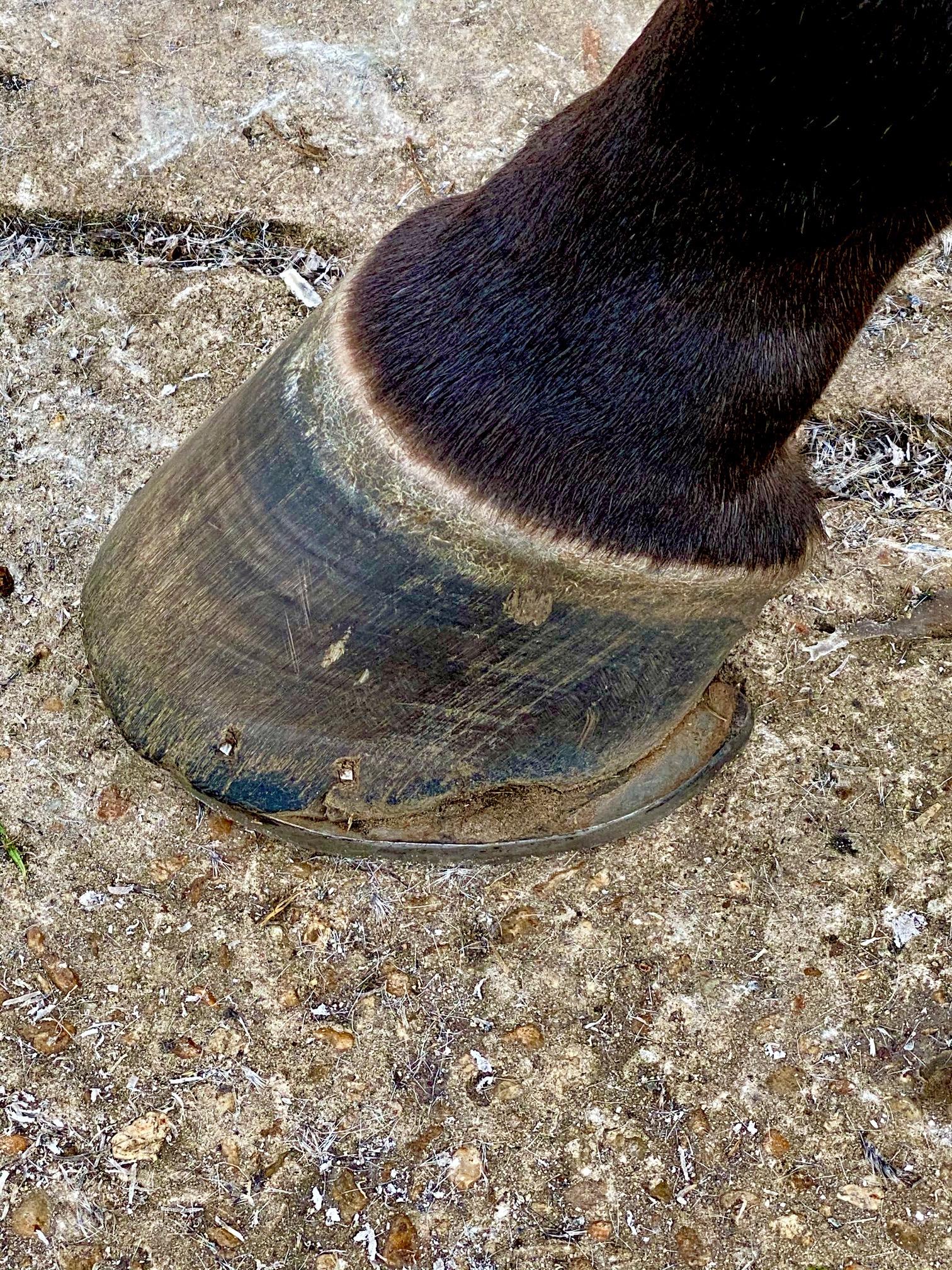 The left rear that he sprung between breakfast and his farrier appointment. Photo by Libby Henderson.

I handgrazed him for a couple of hours after the vet left and we worked on his ground manners. As I stalked up from the back of the property after he had tried his “Hi-ho Silver” impression for the third time and had gotten me enough off balance that I dropped his lead rope, I was pretty mad with him. But, I wouldn’t trade him or this experience for anything. Even when he is a jerk. And I am really grateful for a little more time to get us there. Everyone, please be safe, wear your mask and follow all the USEF rules. This virus has a high survival rate, but having even a mild case is pretty awful, and I’m grateful to spend some more time social distancing. 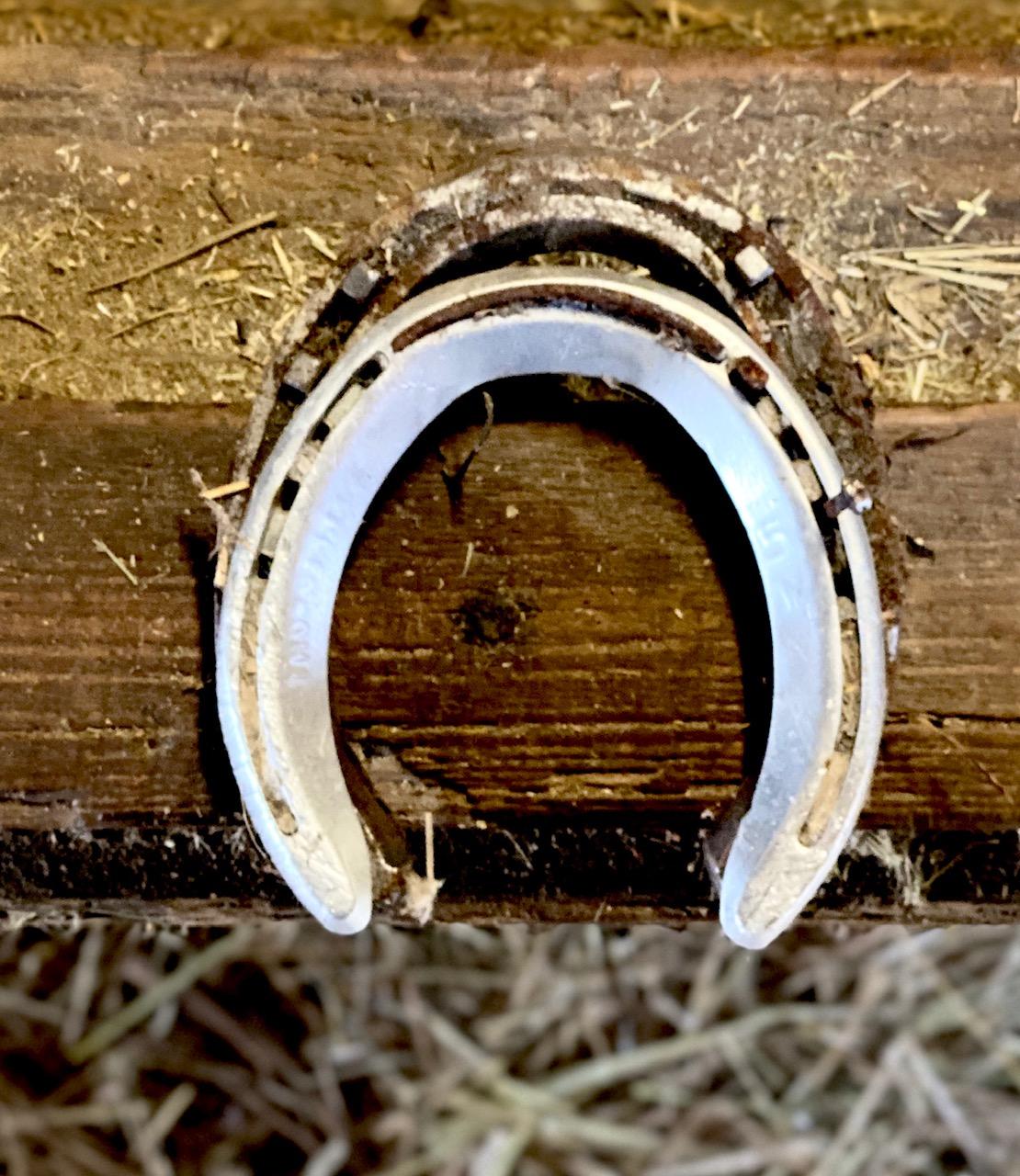 Spider’s rear race plate, on top of a current rear shoe. The good news is that he has grown two shoe sizes in the last year. Good farriers are priceless. Photo by Libby Henderson.