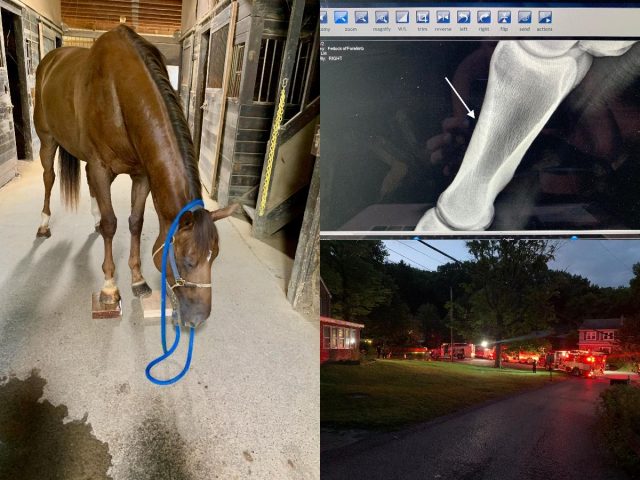 July 22, 2020DeAnn SloanDeAnn Long Sloan#series, Equine RehabComments Off on I Get Knocked Down (But I Get Up Again): The Refrain of 2020

This year keeps delivering its hits, and July has been no exception (at least for me). The good news is that with these blows comes the opportunity to grow and learn. Between a house fire and a laid up horse, I am being afforded plenty of chances for growth.

2020 has been a hell of a year. Between multiple global crises and, like, life in general,  we’re stuck in this never-ending cycle of suck. As I sit here sipping my coffee and reflecting on the past sevenish months, Chumbawamba’s 1997 song “Tubthumping” keeps coming to my mind unbidden (also, I was today years old when I learned the name of the song was “Tubthumping” and not “I Get Knocked Down”):

Truthfully, it was just that portion of the song that kept popping up in my head. When I looked up the lyrics, I was surprised to realize that refrain makes up about half the song. Then I realized that the song even more fitting for 2020 because, well, we keep getting hit with wave after wave, right?

(If you can zoom in on the pictures in this Instagram post, I recommend it. It’s worth it.)

Looking at the rest of the lyrics, they’re not unsuited to this year either:

And just to add some more whine to the situation, I’ve had a couple of personal things pop up that are keeping life … interesting. Three weeks ago, my house caught fire. Y’all. My. House. Caught. Fire. On my husband’s birthday. 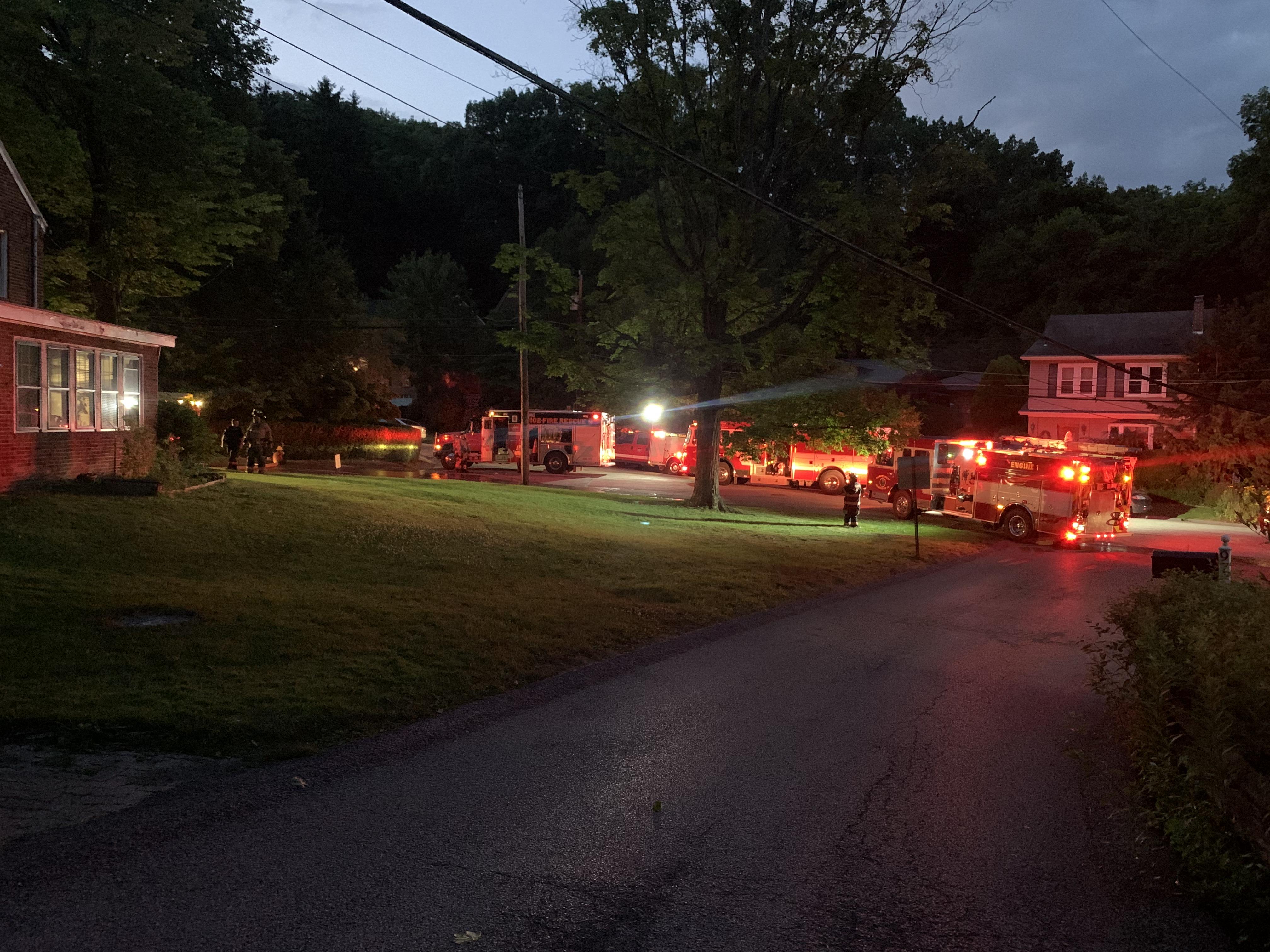 The scene when I arrived at my house. Photo by DeAnn Long Sloan.

Fortunately no flames were bursting through the roof, but they did have to saw into my slate roof to find the source of the fire. Photo by DeAnn Long Sloan.

To be fair, other than not having a fire, we are really truly lucky. My husband, kids and dog were outside in the backyard. I was at the bar like the good mother I am. The kids smelled something and the neighbor saw smoke, so my husband was able to react quickly by flipping the main breaker (it was an electrical fire) and the neighbors called 911 right away. Multiple fire departments were training at a park nearby, so they arrived within five minutes. The fire was controlled and nothing was actually burnt other than some joists and insulation in our attic. 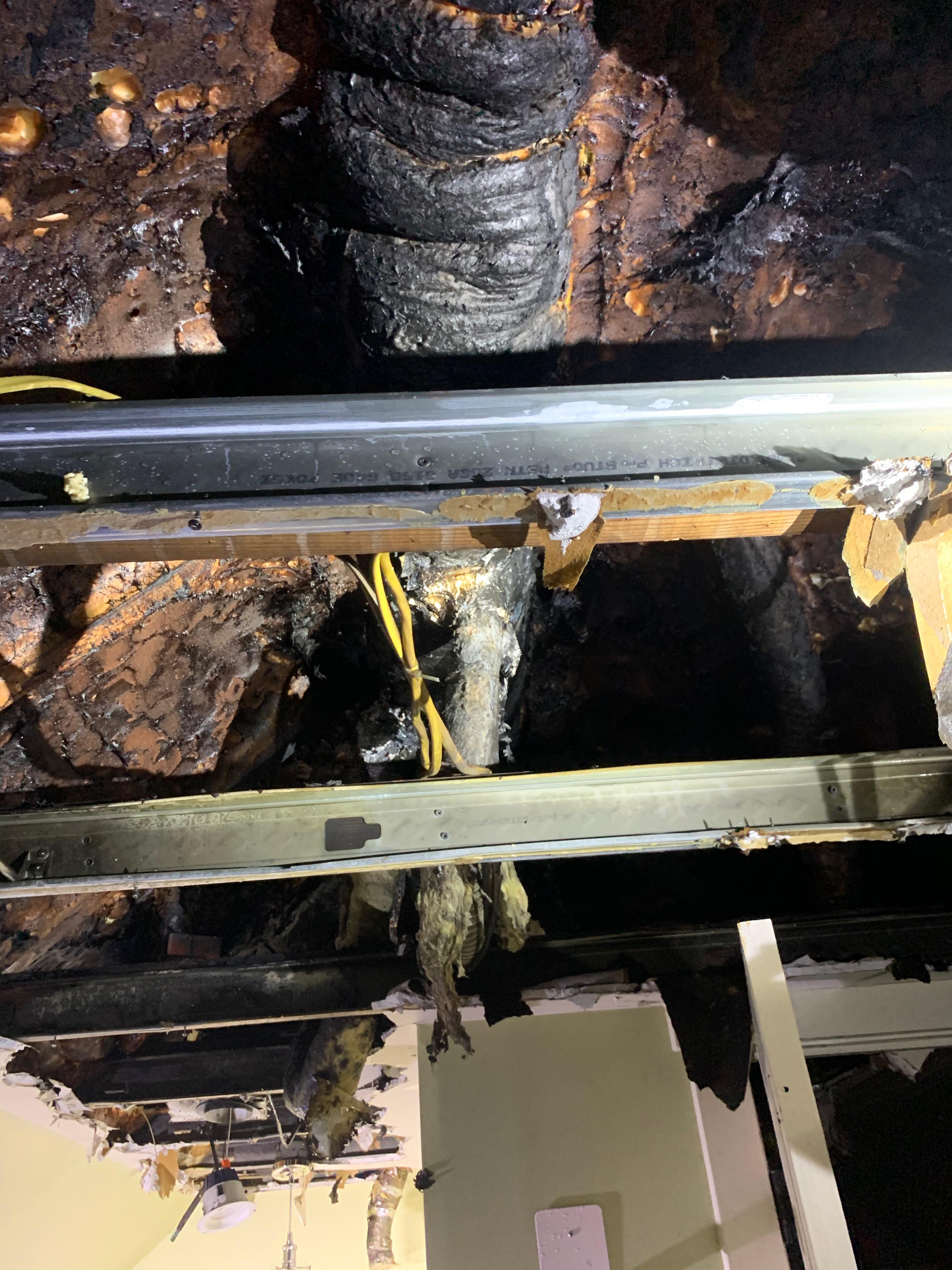 But, the fire started in the attic, so to make sure it did not spread, the fire departments did an admirable job of locating the source and dousing it with water. A lot of water. And the source was in the attic… above the third floor. The laws of physics tell us that what goes up must come down, and come down the water did… all the way to the basement. So even though not much burned and the smoke damage is minimal, the water damage is extensive enough to ensure that we’re out of the house for the foreseeable future and that a fair amount of mitigation, demolition and rebuilding will be happening. 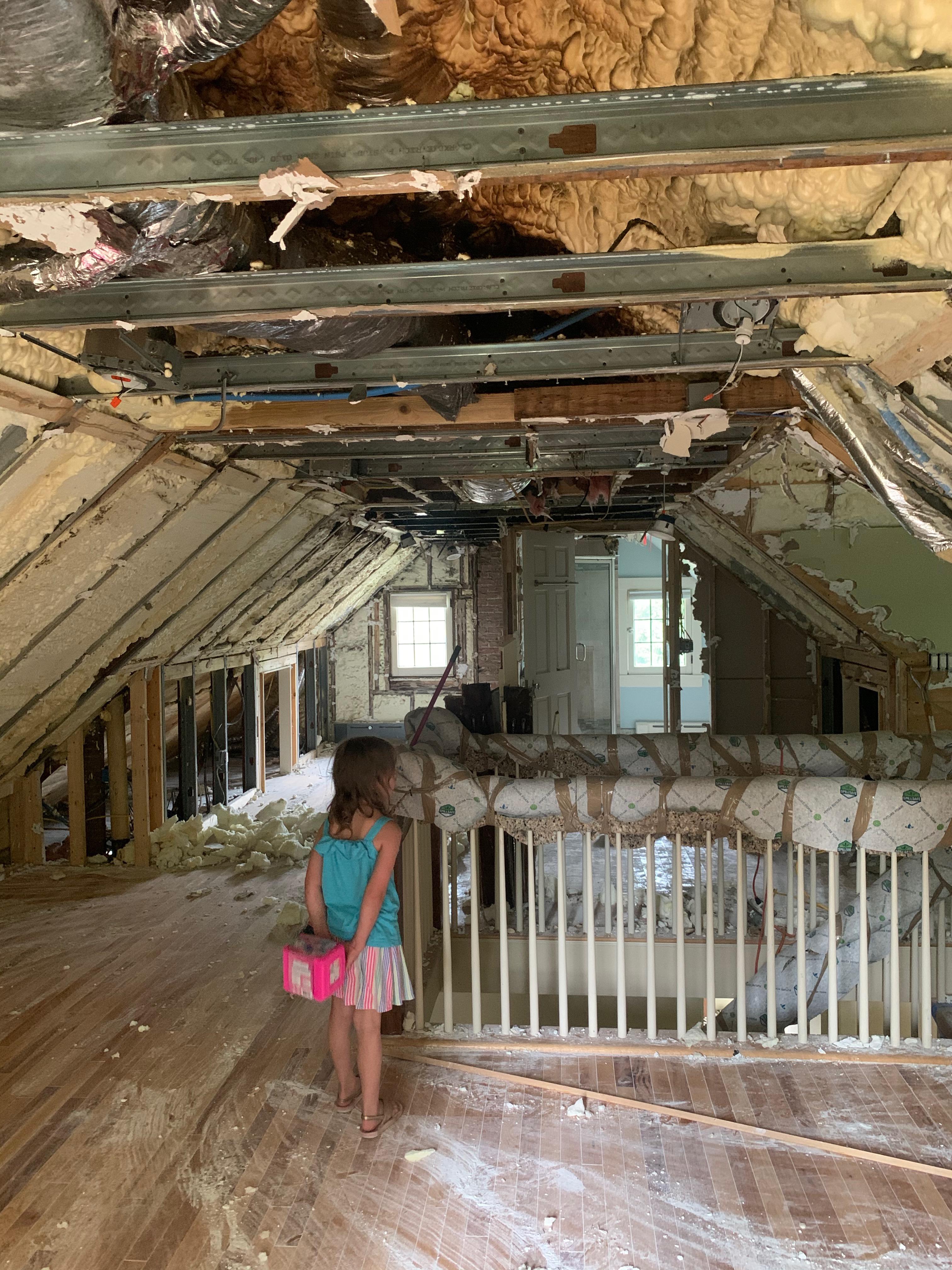 My third floor after some demolition. Photo by DeAnn Long Sloan. 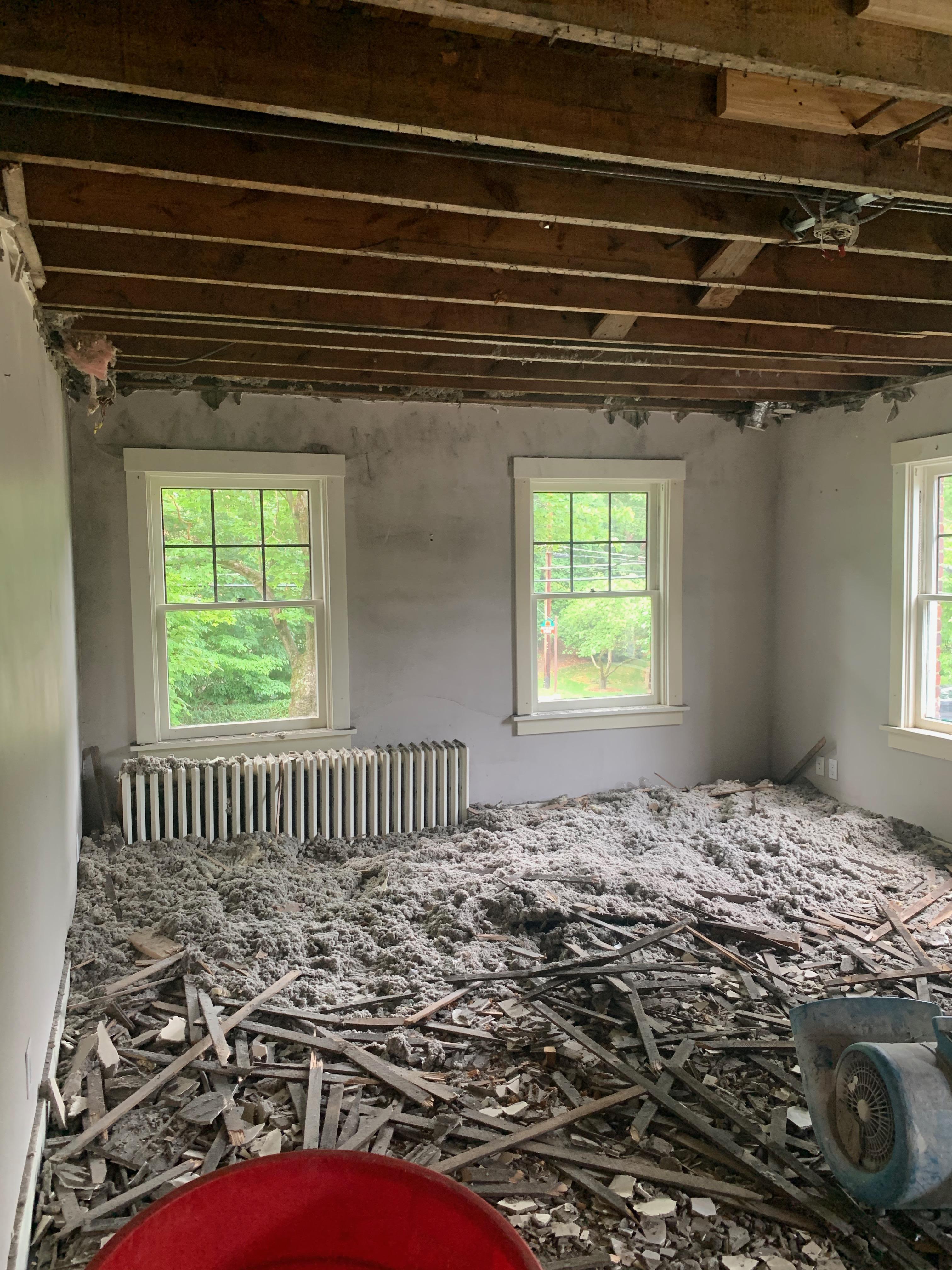 My bedroom after some demolition. Photo by DeAnn Long Sloan.

The good news is that everyone is safe and healthy. Even the cat, who appeared the day after the fire after hiding who-knows-where. 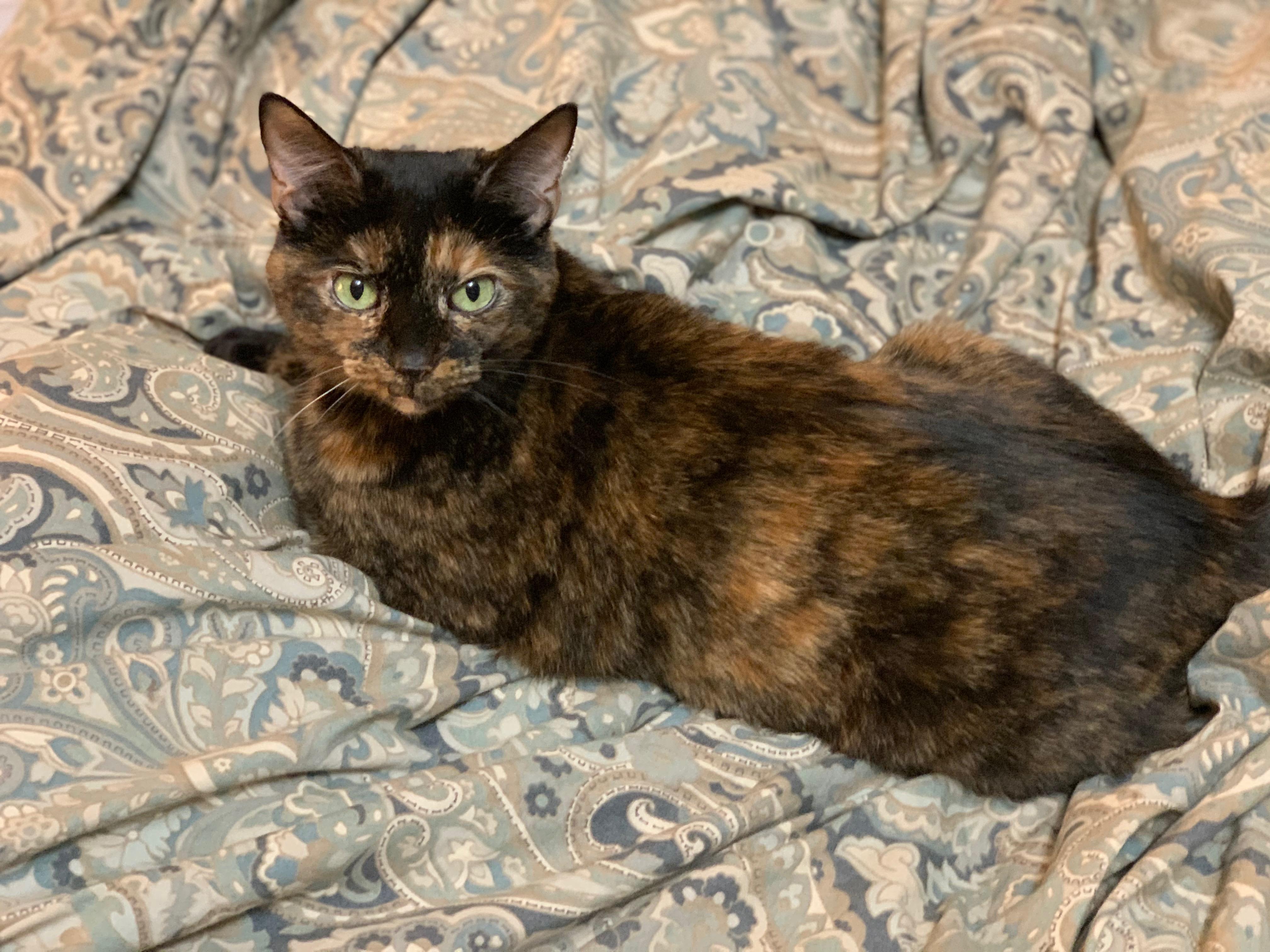 It doesn’t seem that we lost anything irreplaceable (and even if we did, it’s just stuff, right?) and we have good insurance. It may have taken a fire to make it happen, but my basement is organized, my floors will be refinished and someone else is washing and folding all of my laundry (since I have a husband, three young children and I’m an equestrian, this is no small thing). I think there were even a couple of horse coolers and my chinks that got taken to be cleaned. Silver linings, right?

So, as my family and I have been navigating the fire and everything it entails, a pre-existing concern became more of an issue. Mac, my six-year-old off-track Thoroughbred (JC Rightful Goddess) had come in lame the week before the fire. Seeing some diagonal lameness (right front to left hind), I put her on stall rest. To make the case interesting, there was no obvious swelling or heat, but I put a standing wrap on the right front anyway, rubbed down her hind end with some liniment (as the issue appeared to be up high), gave her some Bute and called the vet. The vet couldn’t make it out to do a full lameness exam until the following week and, as it wasn’t urgent, I continued the course of action I was already taking and waited for the vet.

Over the course of the next few days there was some minor improvement (the hind end lameness subsided and the front right lameness appeared to be in the foot), but my horse certainly wasn’t sound. So in she stayed, with a standing wrap and hoof wrap in case it was a really bad abscess. My mare is not known for her stoicism, so it was not out of the realm of possibility that an abscess would cause this extreme of a reaction. 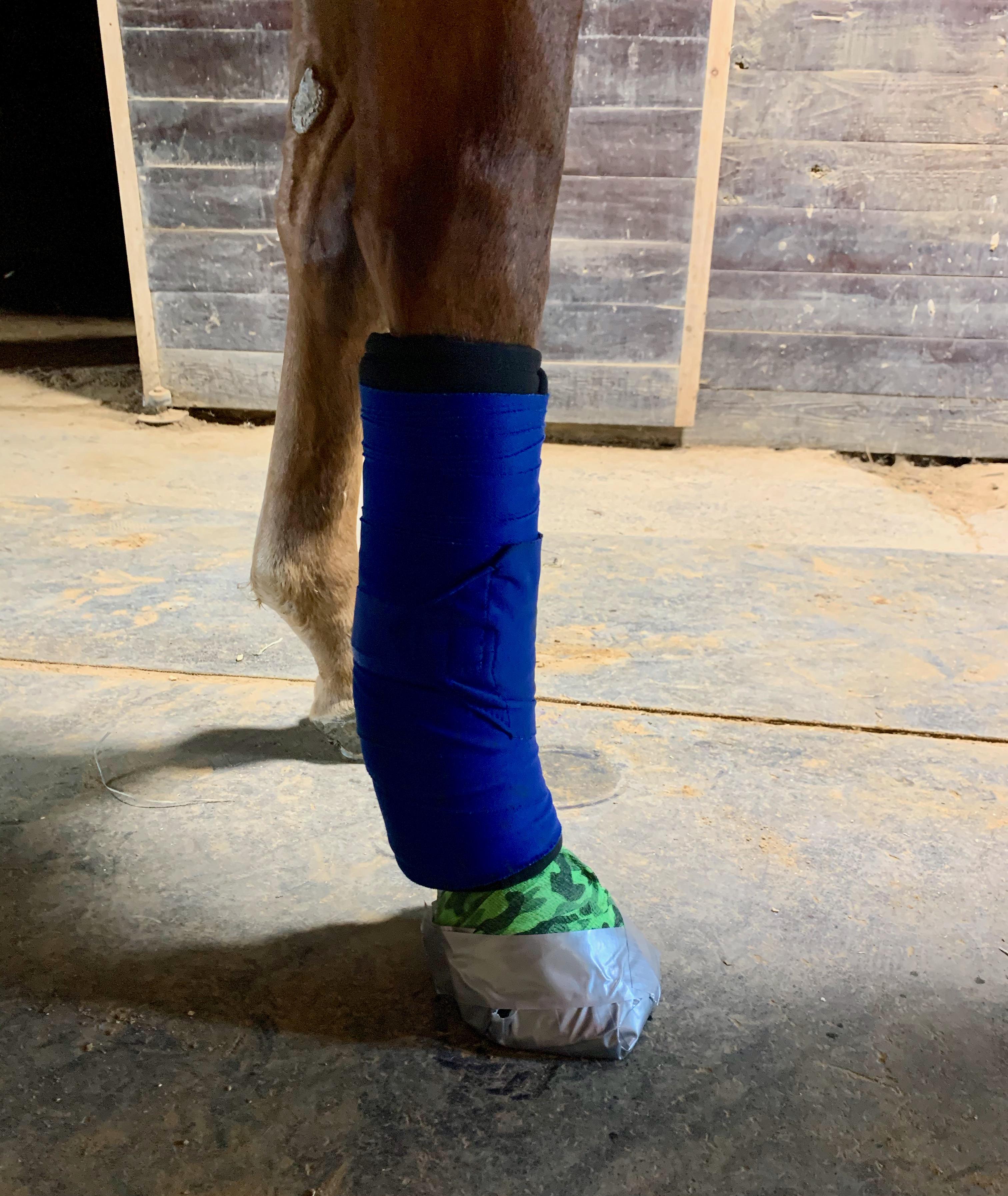 Hoping for an abscess. Photo by DeAnn Long Sloan.

Then the fire happened (read above), my friend and barn manager took over my mare’s care for a couple of days while I regrouped, the same course of action ensued and I waited for the vet.

What seemed like an eternity later (but it was really only a week and some), the vet made it out. Even though I had made an appointment with the intention of doing a full lameness work up, it was quite apparent that the issue was in the right front. After blocking the foot both medially and laterally, the lameness became less pronounced but did not go away. So, not an abscess. Damn. 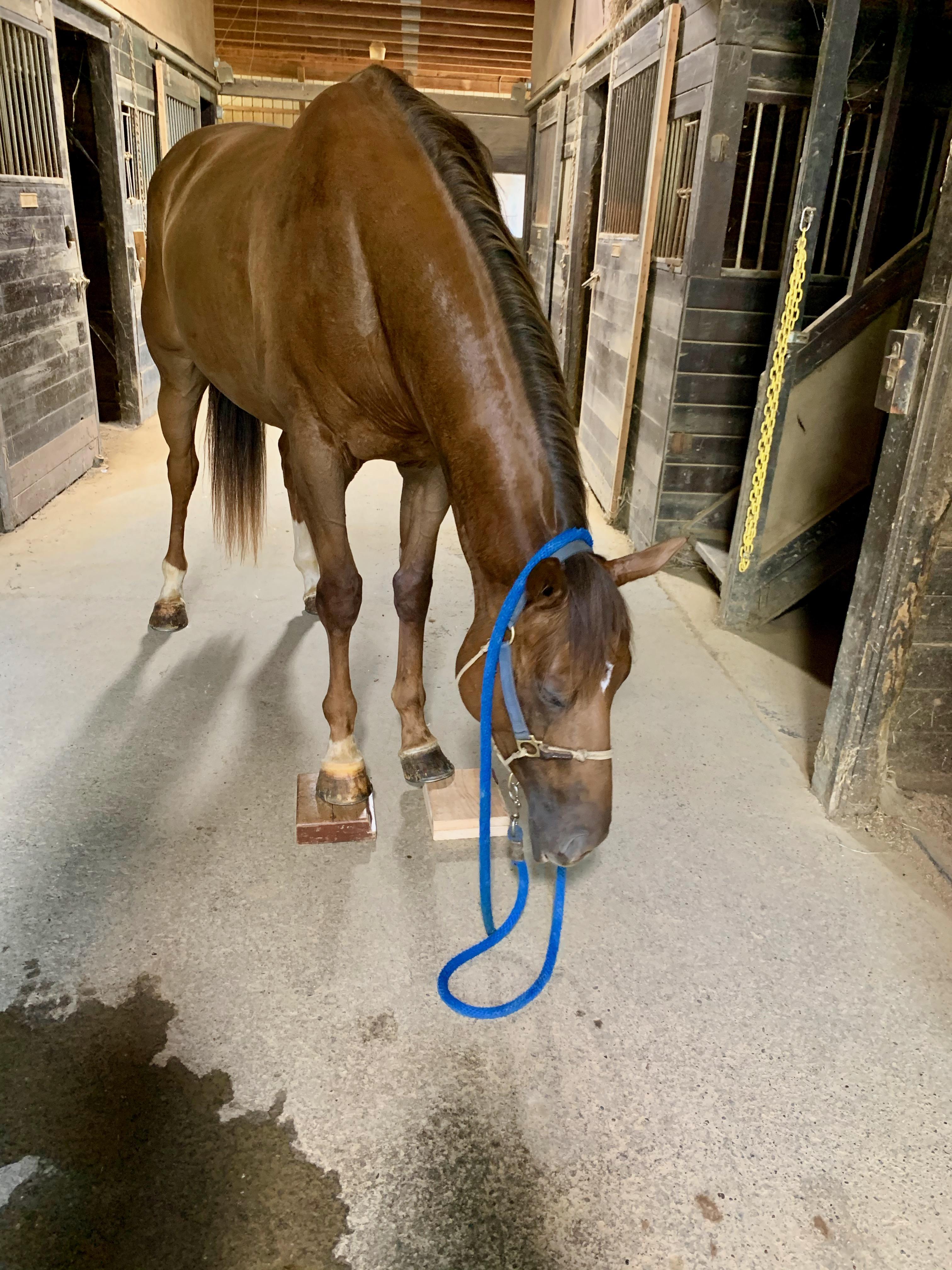 Mac, sedated and playing a balancing game on the wooden blocks following her x-ray. Photo by DeAnn Long Sloan.

Let me back up: I don’t typically call the vet every time I think my horse has an abscess. Normally I treat it like an abscess (liberally apply an epsom salt poultice to the foot, diaper it, vet wrap it and duct tape it,) maybe talk to the farrier and move on after it drains. However, this year has been marked by a lot of small issues that have kept my mare laid up more often than not. I decided to be done with it and just do a full work up. However, that was derailed by the obvious issue with the front right leg during this vet visit. After all, you can’t do a full lameness work up if there is an acute issue that needs to be addressed in the moment.

Anyway, back to the issue at hand. Following the block, we sedated Mac and took radiographs (I say “we,” but let’s be honest — my vet did all the work while I held a lead rope and watched). My back was turned away from the computer when my vet pulled up the films on the screen. I heard her say “Well, that’s interesting.”

The X-ray indicated that Mac has a hairline fracture in her front right pastern. Great. 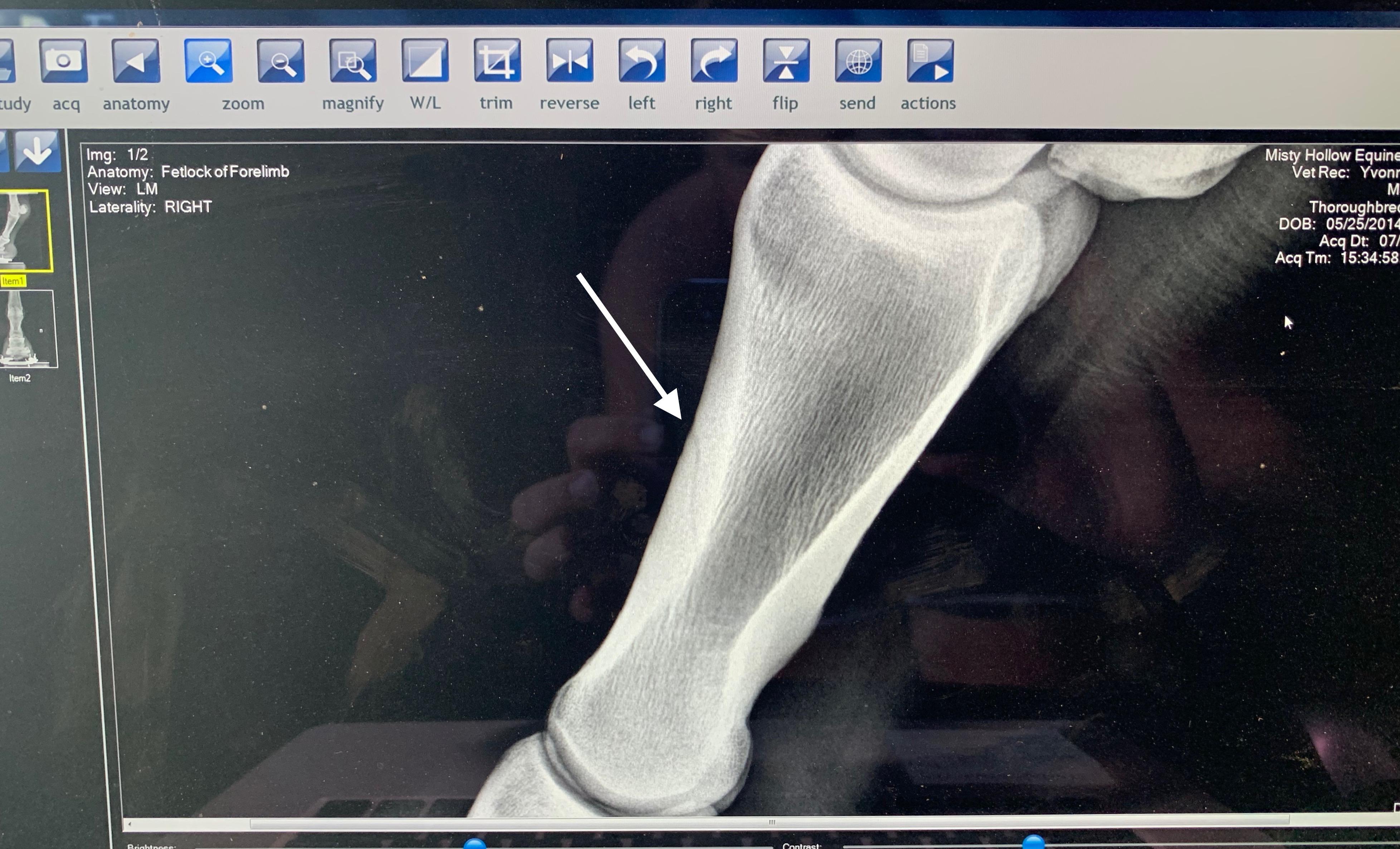 The good news is that it is a fracture and it will heal with proper rehab. More good news is that there seems to be little damage to the ligaments and tendons. I had my vet do an ultrasound to make sure because if there is extensive soft tissue damage that will affect our future more profoundly than a fracture ever could.

So, for now, Mac is on stall rest with a no-bow quilt and vet wrap on the right (fractured) leg and a no-bow and standing wrap on the left leg for support. As of right now I haven’t wrapped her hind legs because her incessant stall walking keeps her from getting stocked up. She’s on anti-inflammatories and all the hay she can eat. The vet will be doing a recheck in a few weeks and we will move forward from there.

As I navigate my way through my mare’s rehabilitation, I will be offering regular updates with some fire drama thrown in for good measure. And, lest I seem like I am feeling too sorry for myself, let me say that I am very aware of how fortunate I am. My family and pets are safe and mostly healthy. I have been afforded the opportunity to REALLY organize my house and purge it of unnecessary stuff (of which there was a lot), examine what is necessary and what is not and to rethink my approach to my goals with my horse.

I get knocked down, but I get up again…

Maybe it’s time for the Whiskey drink or Vodka drink. Onward and upward.