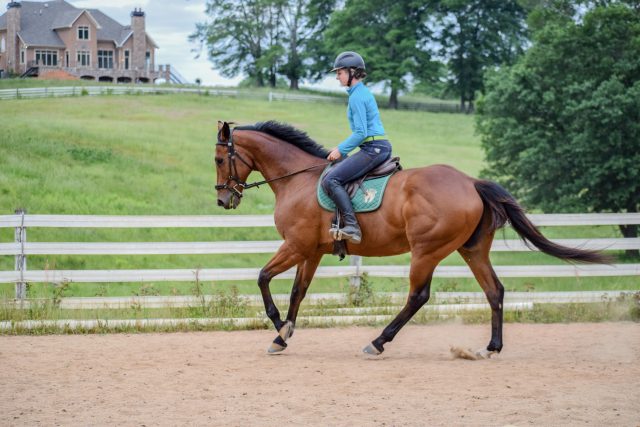 June 25, 2020DeAnn SloanContributor#RETIRED RACEHORSE PROJECTComments Off on 2020, You Are a Doozy: Aubrey & Boomer

“Like many of us, Boomer now has to deal with a new normal where life is a bit smaller and, often, more stressful.” Boomer has months of stall rest ahead, but Aubrey Graham explores other options as she works toward the Makeover, “come hell or high water.”

For 616 accepted trainers, the journey to the Retired Racehorse Project‘s 2020 Thoroughbred Makeover and National Symposium, presented by Thoroughbred Charities of America, has begun! Over the next eight months, four of those trainers will blog their journeys, including their triumphs and their heartbreaks, successes and failures, for Horse Nation readers. This week Aubrey Graham discusses some of the setbacks that come into play on the road to the Makeover.

The other morning, I exited my barn apartment and there was Boomer (JC Vanderboom Ridge), standing with his shoulders leaning forward through his open stall door. Ears up, the clever pony could have exited and gone for a thorough galavant about the property, but he just waited for me to come acknowledge his nifty door-opening trick. After showing significant potential gearing up to the RRP Makeover, Boomer is now stall bound. Plus, he’s stuck next to Forrest… To anthropomorphize, if Boomer could talk, he’d likely join the conversation about the bright hopes 2020 held and the disappointing spiral that has set in. 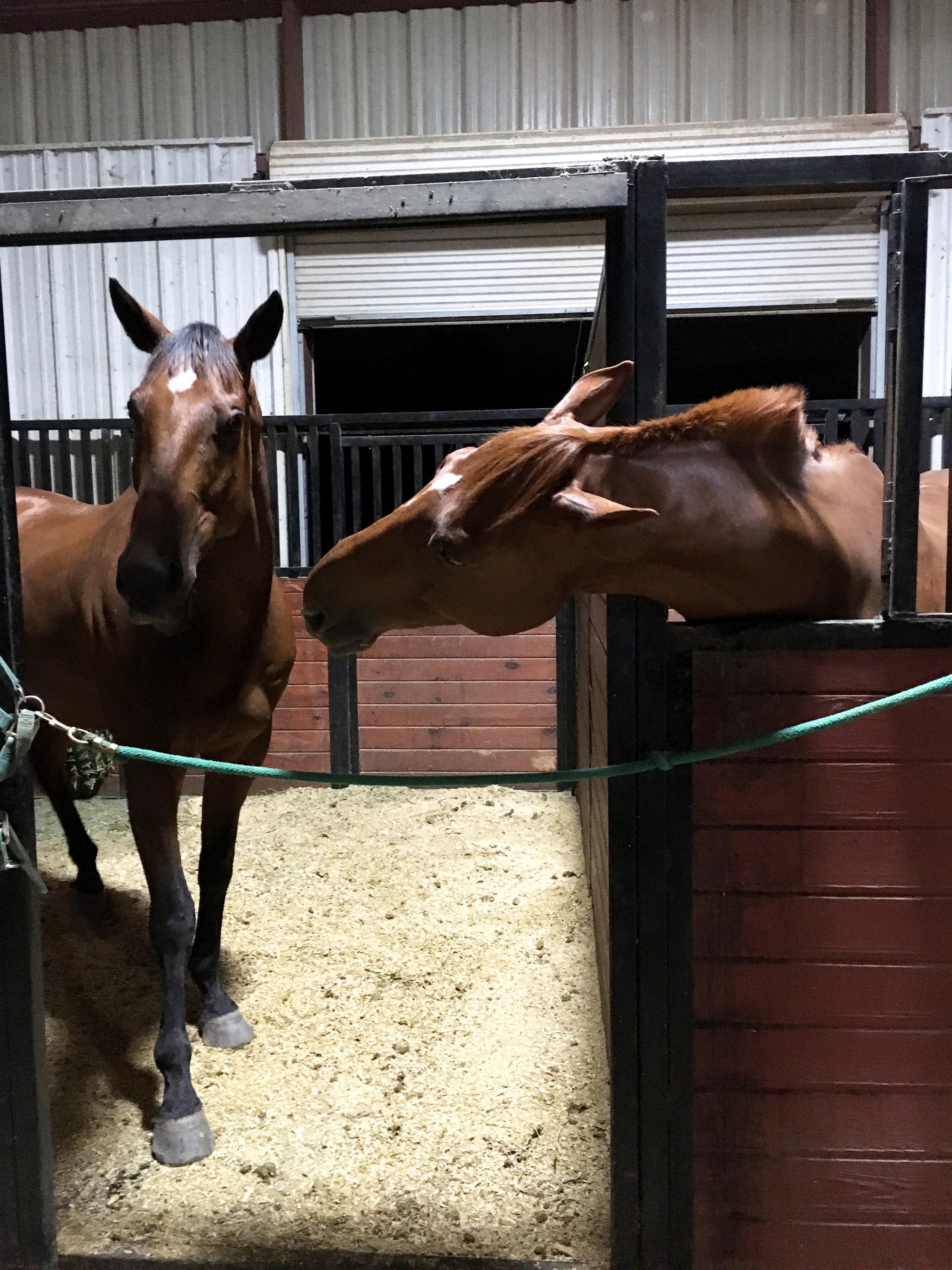 Boomer does what he currently does best and chills in his stall, out of Forrest’s reach. Photo by Aubrey Graham.

Last I wrote, the challenge to engage Boomer’s hind-end led to the discovery of an enlarged sesamoid bone in his hind right ankle. The day the blog went to print, we ultrasounded and found a lesion in his suspensory. While I had big dreams for him at this year’s RRP Makeover, it looks like Boomer’s show-ring potential will have to wait. All involved believe he will recover well, but he is going to have to be out of work for a few months first. In the long run, this is not a big deal. In the short run, dammit, this sucks. 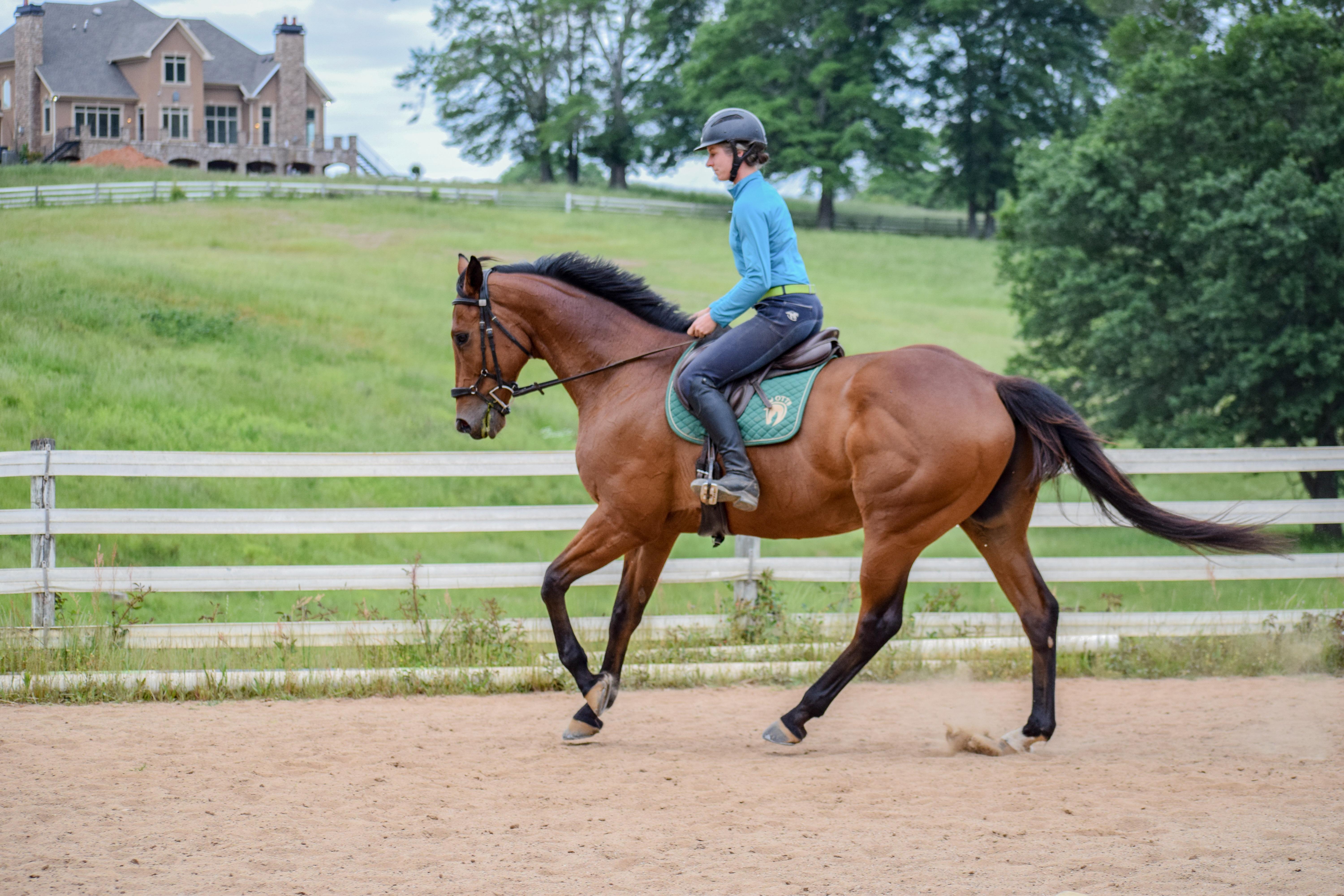 I’m hoping Boomer will be able to get back to this sooner rather than later. Photo by Alanah Giltmier.

But that’s a lot like life right now. As the COVID-19 pandemic put the world on pause, my lessons and training sessions dwindled and I have had to productively re-gear my business. In so doing, I have had to fall back on the same philosophy: a) take a breath and let it be what it is, b) know that it will eventually come to a conclusion and c) with proper action, hopefully it will get better. Hopefully.

So, as 2020 wears on, I’m working to apply this concept not only to my horses, but also to my life more broadly. The most current situation requires similar thinking; my partner is the lieutenant of the Atlanta Police Department’s Mounted Patrol, so politics aside for a moment, I’m also wading through this elongated moment of anxiety while Greg and his crew of amazing folks man the protests. This situation comes with not seeing each other, general societal limbo, his extraordinarily long hours, even longer weeks and pretty minimal sleep for all involved. 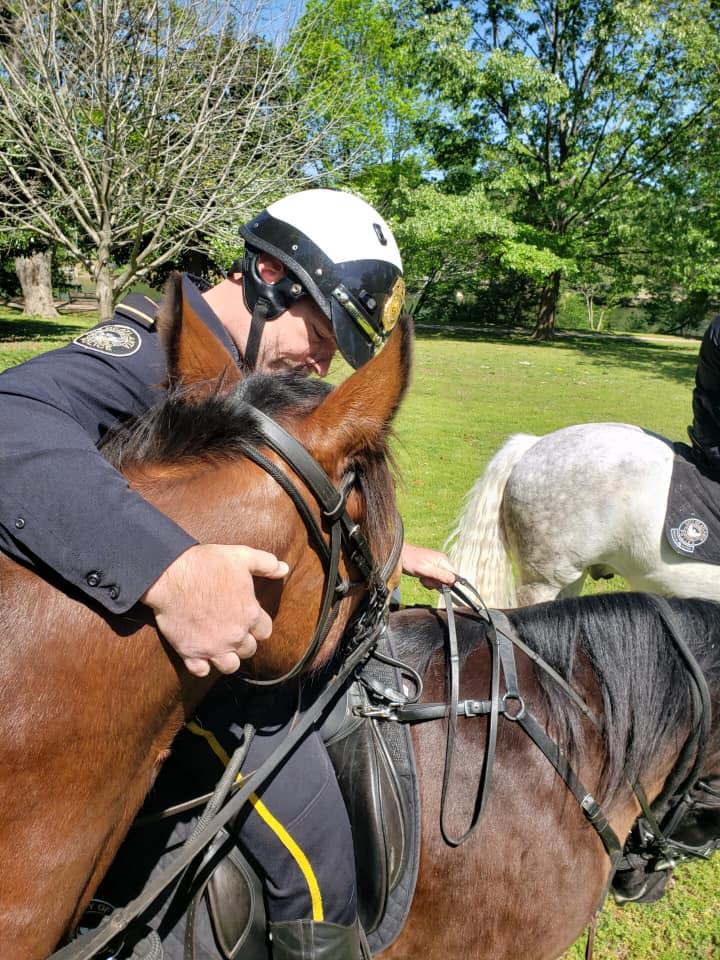 Lt. Greg Lyon rides Drifter, while Jasper uses him as a head-rest at Piedmont Park a couple months back. Photo by Joe Williams.

From my vantage point, patience (and flexibility) seem to have become central. Patience, however, is definitely not my strong suit. I’m far better at making plans and taking action. In light of my relationship, planning/action is nearly impossible right now. Boomer’s case is a whole lot easier — a concoction of rest, stemcells and hand-grazing set him up for the four-six month rehab he needs. I also scavenged extra gates, round-pen panels and pallets and built him a miniature turnout where at least he can get some sunlight, roll and socialize with Luc over the fence. Like many of us, Boomer now has to deal with a new normal where life is a bit smaller and, often, more stressful. Hopefully, the tiny effort of the tiny paddock will help keep him sane. 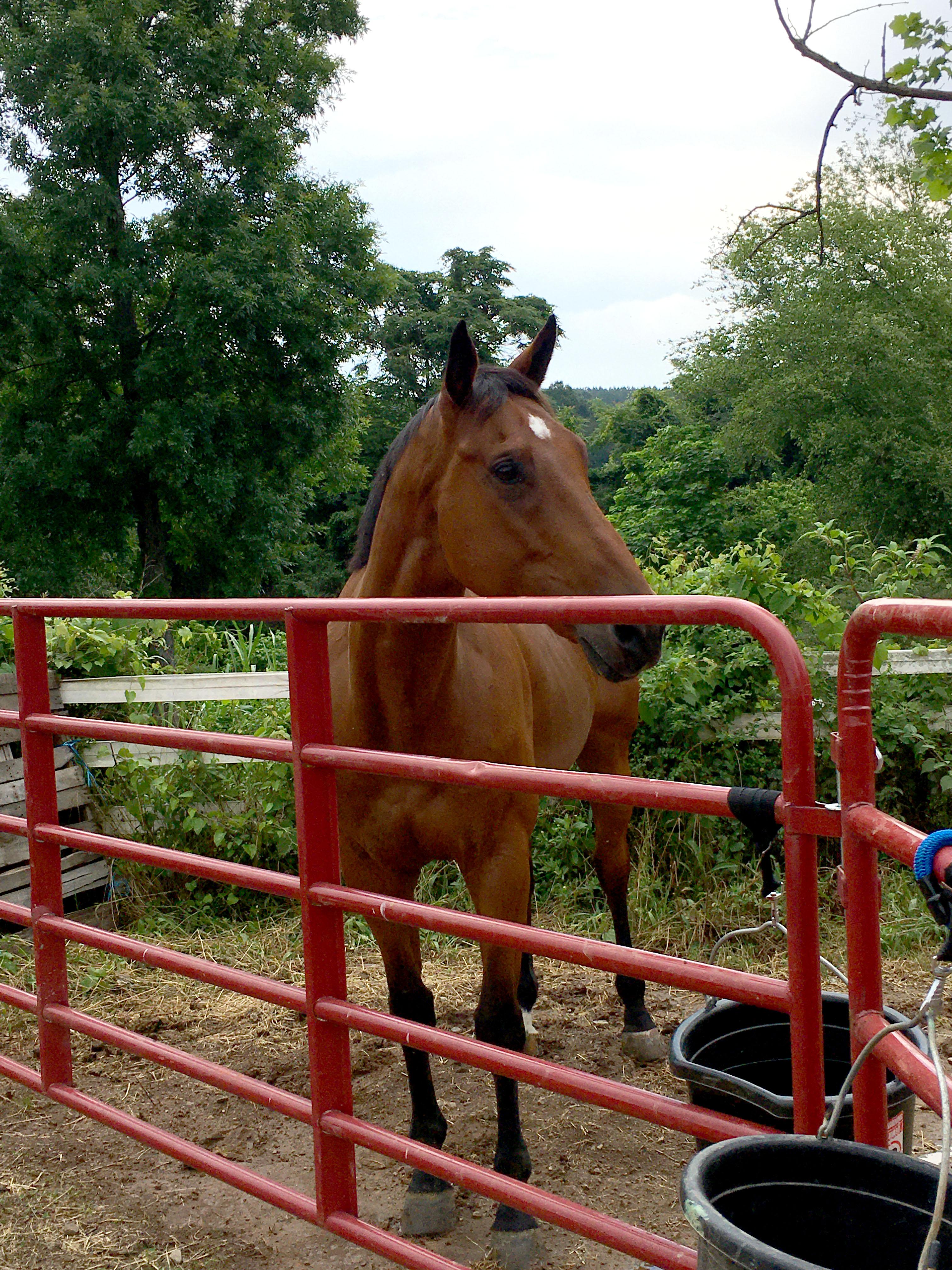 Boomer soaks up the sun in his spiffy (i.e. makeshift) mini-turnout. Photo by Aubrey Graham.

Despite the doozy that the first six months have been, I’m not willing to give up on this year – or for that matter, on the Makeover. So, with Boomer settled into this new “this sucks” routine, I started to poke around for other RRP horse options, as I’ll be at the Makeover come hell or high water. For a couple months, I have been working with two horses in my barn who are eligible. Of the two, the furthest along option is “Ranger” (JC: Cowboy Night), owned by Kelly Lupton and partially leased by my student Patricia Krause. At the beginning of the month, Big Cheese Eventing (hosted at Ashland Farms) kicked off their spring schooling show series and I put Ranger in a few jumper classes. 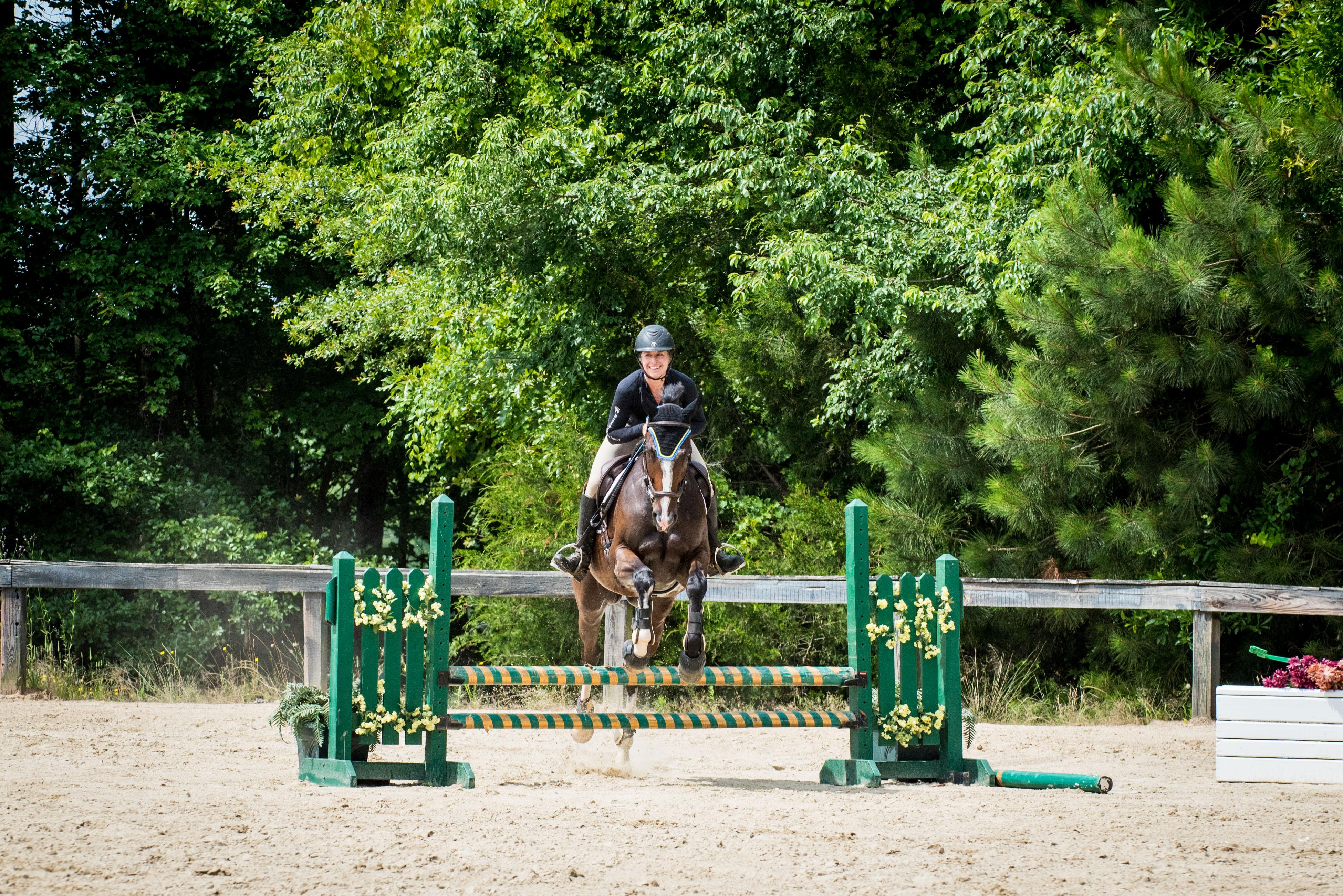 Two weeks later, Patricia piloted him through his first dressage tests. He’s lovely, talented, balanced and goofy in all the right ways. I’ll get him out cross-country schooling soon and see what he thinks. Who knows? With any luck he just might be able to event and show jump in October. 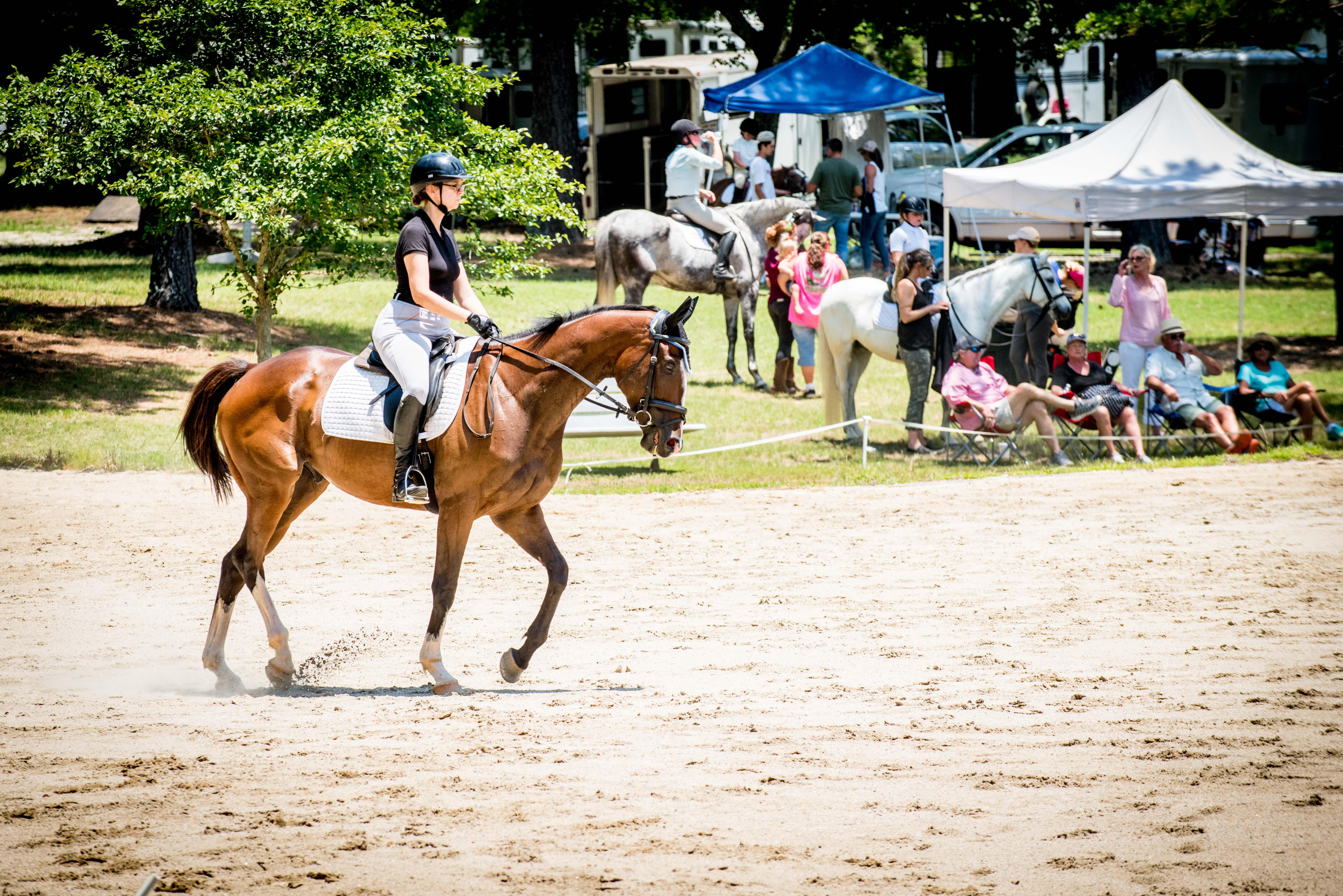 While Ranger might just fit the RRP bill and step into Boomer’s spot, I also have a second entry that I could possibly fill. Curious what additional prospects might come up, I put a note out to the RRP Trainers Facebook page. Options for a second RRP training horse arose, fell through and I put what little remaining patience I have remaining to work. Sometime near the beginning of the month, Kelly Lupton again saved the day and offered to put her second 2020 RRP personal horse, Irish Summer, on their rig and send him to my barn for training. Yesterday, the striking 17+ hand gray 3-year-old gelding arrived, fit, happy and moving with a jaw-dropping trot. “Irish” (JC Irish Summer) is at square one in retraining… and it is almost July (that leaves me three-and-a-half months to get him ready). 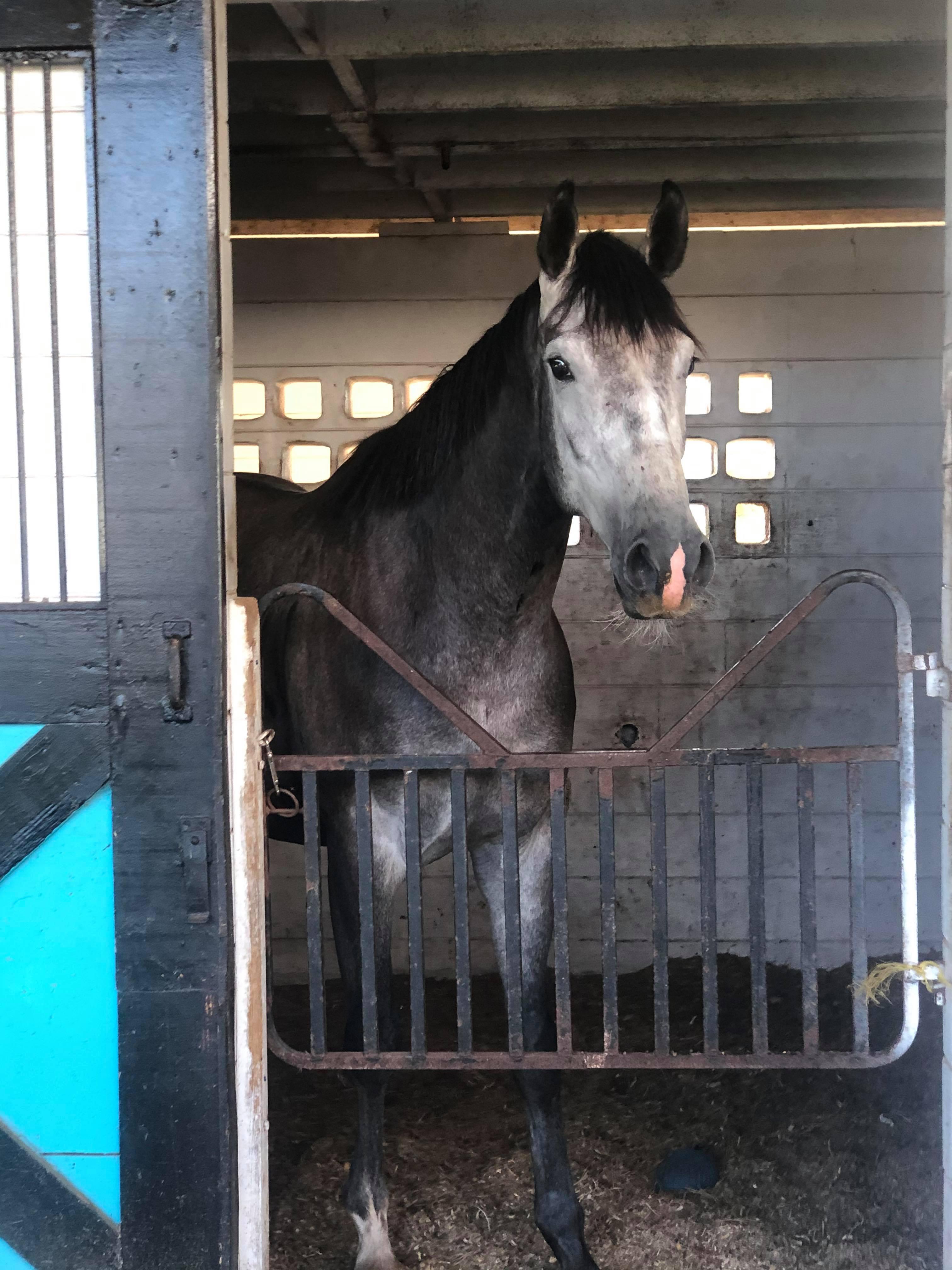 Irish Summer poses for the camera in Ocala before shipping up here. Photo by Kelly Lupton.

I’m excited about that though, as with all this waiting and anxiety, there’s nothing like a due date and an exciting new project (on top of all the current, new and returning lessons and training horses) to happily and productively get me through the days. Irish will let me know if he is able to put it all together in the time we have. And while I refuse to rush them – especially the young ones – he will be a fun experience and hopefully walk out of my barn with a plethora of new experiences and abilities, whether he makes the Makeover or not. If nothing else, having Irish and Ranger in the potential RRP mix will add to keeping me busy and able to both plan and act. The next time I look up, (with any luck) I’ll have one or two horses ready to go to Kentucky, Boomer will be coming out of his rehab, Greg will have his life and sleep back and the future ‘new normal’ will look a whole lot, well, — for lack of any more articulate phrasing — brighter.