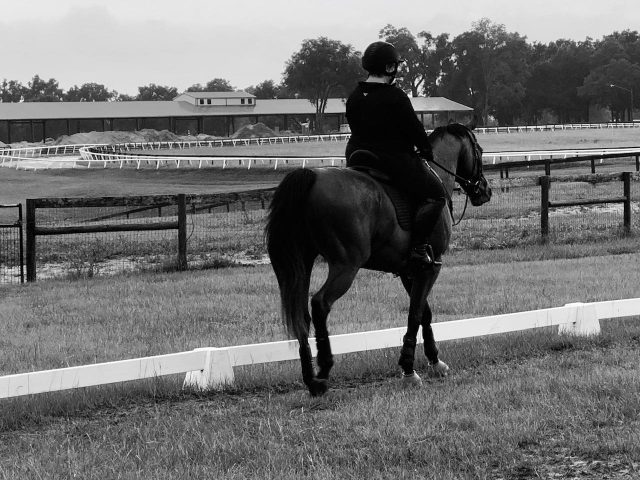 Henri Nouwen said, “True hospitality is welcoming the stranger on her own terms. This kind of hospitality can only be offered by those who’ve found the center of their lives in their own hearts.” Here’s what it looks like in the horse world.

For 616 accepted trainers, the journey to the Retired Racehorse Project‘s 2020 Thoroughbred Makeover and National Symposium, presented by Thoroughbred Charities of America, has begun! Over the next eight months, four of those trainers will blog their journeys, including their triumphs and their heartbreaks, successes and failures, for Horse Nation readers. Today, Libby Henderson discusses what true hospitality looks like and what it means for her Makeover journey.

“True hospitality is welcoming the stranger on her own terms. This kind of hospitality can only be offered by those who’ve found the center of their lives in their own hearts.”   ~ Henri Nouwen

As I sit down each month to write a blog post on Spider’s (JC name Gossamer) training, I find myself reflecting not just on what he’s learned — the excitement of his first trail ride, or his first lesson in a real dressage arena — but on what I’ve learned and how this journey is changing me. In an almost cheesy way, this process has shown me the value of community like nothing else ever has. In the last month, I’ve been amazed at the hospitality offered to us.

At the end of May, my longtime trainer, Kelley Norred, (we have a torturous 20 year relationship – her bringing me to tears with such phrases as “if you don’t breathe, I’m going to make you SING,” or “no, that’s wrong, do it again” for the 57th time during a wrapping lesson, or me driving her to distraction with my inability to ever feel a diagonal or to see a distance to a fence) suggested I bring Spider over to her farm for a lesson. I wasn’t too sure about this, as Kristina was out of town, and I’d have to ride him myself. Just me. In a new place. Gulp. 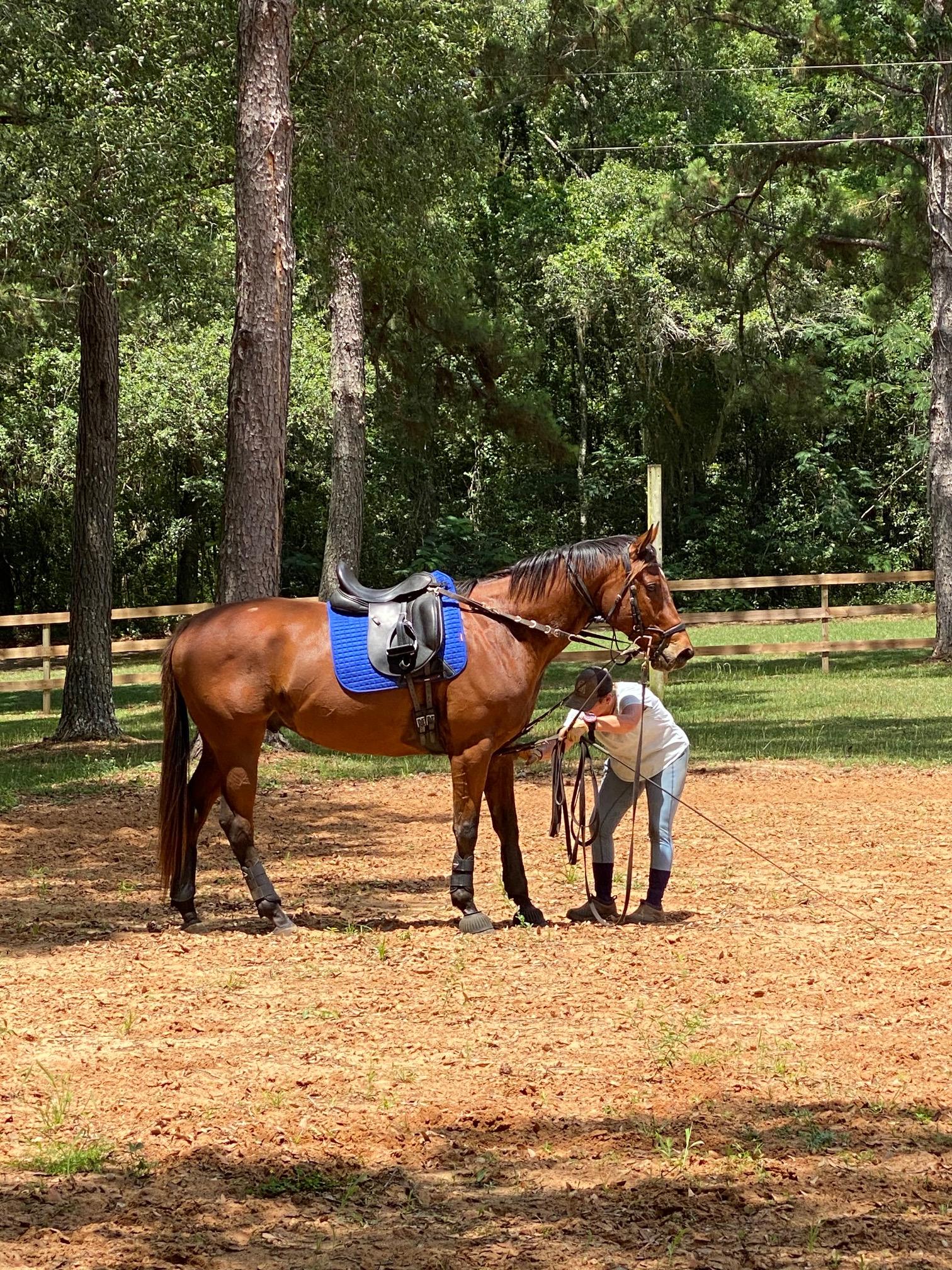 Surprisingly, it was easy. He was quite good, working on the lunge line in side reins for the very first time, and then we went off on his very first short trail ride, with a good calm friend along. If you don’t listen to the audio of the helmet cam footage, you’d never know I was worried at all! 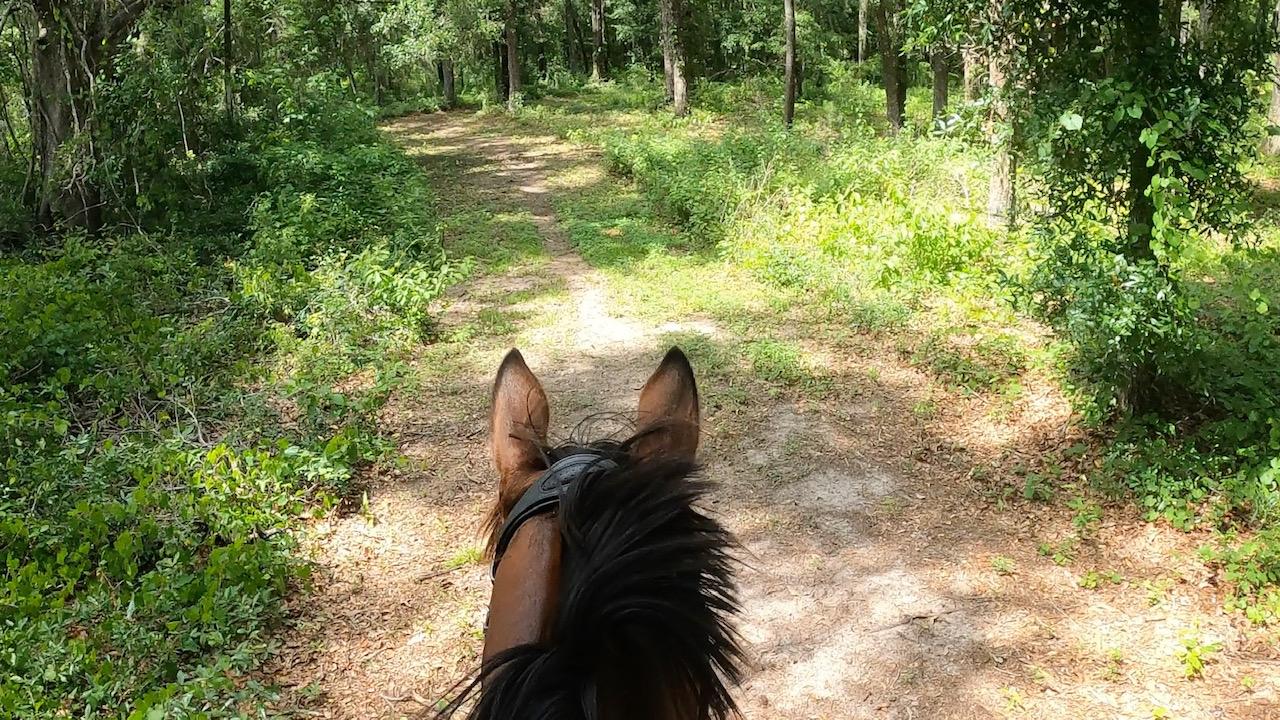 Spider on his first trail ride. Photo by Libby Henderson.

The following weekend, we went on his biggest field trip yet. Last year, when I first really believed he might actually, maybe, be sound and heal from his tendon injury, I had talked to Tik Maynard about the Makeover, and about whether I had any hope of training him and getting to the Makeover. When we went to Event Camp in late December, Spider had gone along and had done groundwork with Tik, and he said that taking Spider to the Makeover was doable, but that I’d have to put in the work. We chatted about it again when Tik came to Tallahassee in March, and he told me I needed to come down to Ocala for some lessons and it was really time to get to work.

And then, the shutdown happened. I messaged Tik as Florida began to reopen to see when we might be able to come down for a couple of days of lessons and suggested late June. That would give us time to get further down the road with his training and might justify taking up the time for lessons of two upper level riders.

Eeek — all they had open was the first weekend of June. Kristina planned to go along and take her event horse, and we set up to do two lessons each, on two days with Tik and Sinead Halpin Maynard, his wife, and 5* rider and all around eventing goddess. Y’all. Not only were we going to ride with the author (Tik’s book is In the Middle Are the Horsemen – if you haven’t read it, what are you waiting for? Trafalgar Square Books will send you a copy!), but also with one of my eventing idols.

The week before departure was hectic, and I found myself Friday morning not only not packed, but also still wiring replacement fans and hanging new screens in the horse trailer. We eventually set off, only two hours late, for Ocala, and decided to ignore the forecast – after all, my friend said her farm hadn’t seen but an inch of rain in the last month, even when the forecasts had promised storms. I offered to bring the rain with me, because we’d been soaked in North Florida.

And bring the rain we did. My friend Kris opened her guesthouse so we had a place to stay, five minutes from Tik and Sinead’s farm. It started to rain as we unloaded on Friday, and it never stopped.

We learned so much! Such as that two typically quiet OTTBs, who rarely run in turnout, will put on quite a show when turned out together for the first time in a paddock next to a training track and starting gate. Spider learned to step out of a shoe, and how to miss a lesson. We learned that when you are focused, you don’t even notice the rain, unless it is raining so hard you couldn’t hear the instruction! Watching the hours of video from lessons that I brought home, I learned that I need to be better about listening and not talking, and that dinner could be delicious, even when it was fast food burgers in the truck stop parking lot when it was part of a great day. 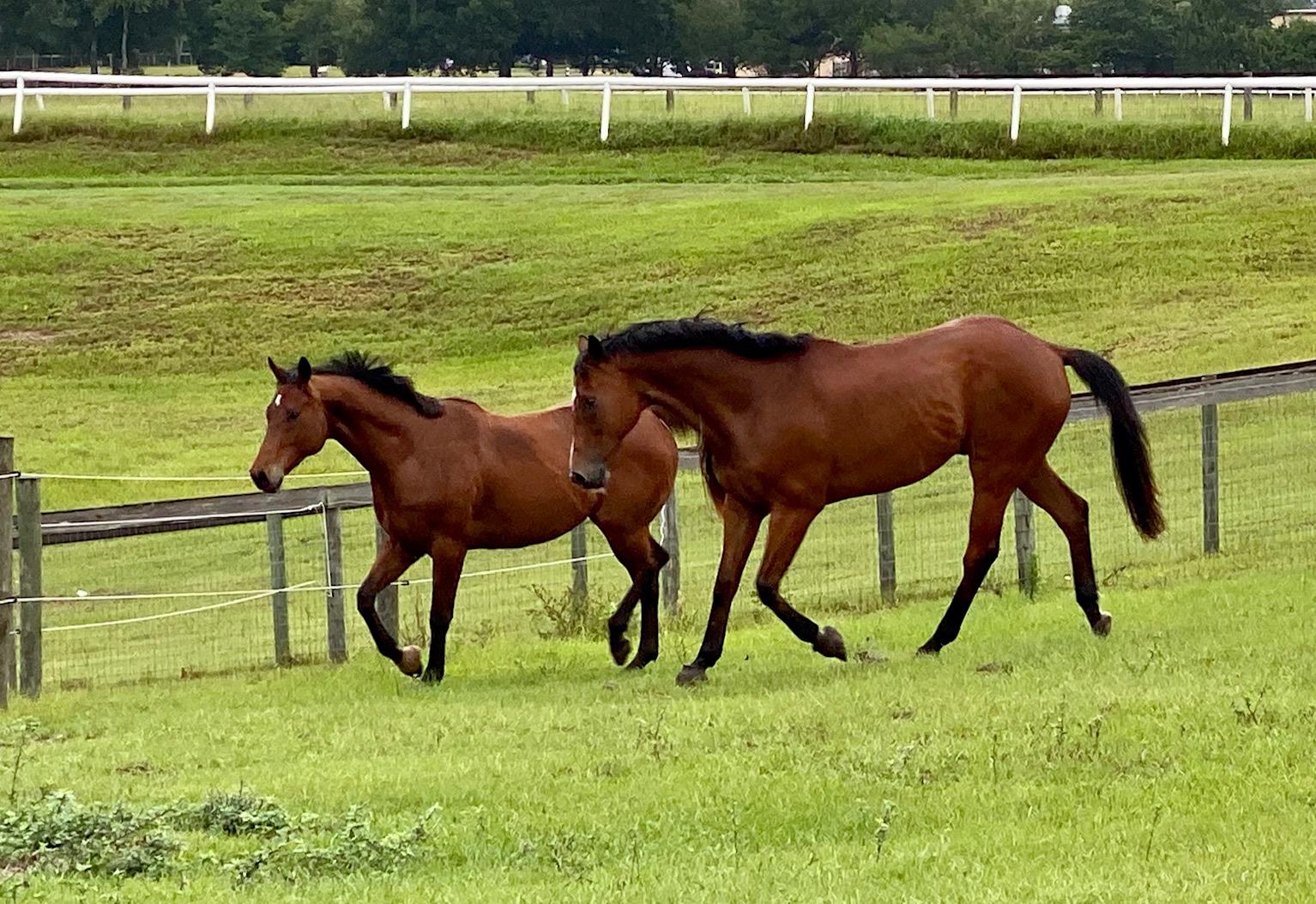 Spider and his new BFF Sammy not making good choices in turnout. Photo by Libby Henderson.

Sunday, with Spider’s shoe back on, he had both an under saddle lesson and a ground work lesson. I was terribly nervous, as this time I’d be getting on when he had been in a stall without turnout, and wouldn’t be lunged first, and well, I was pretty nervous. And he surprised me again. His biggest problem was that he just wouldn’t go. Not only did a 5* rider meet me where I was and put up with teaching me a walk/trot lesson, but she had to jump up half-way through and bring a riding crop for me to carry, so he would go faster than a walk. 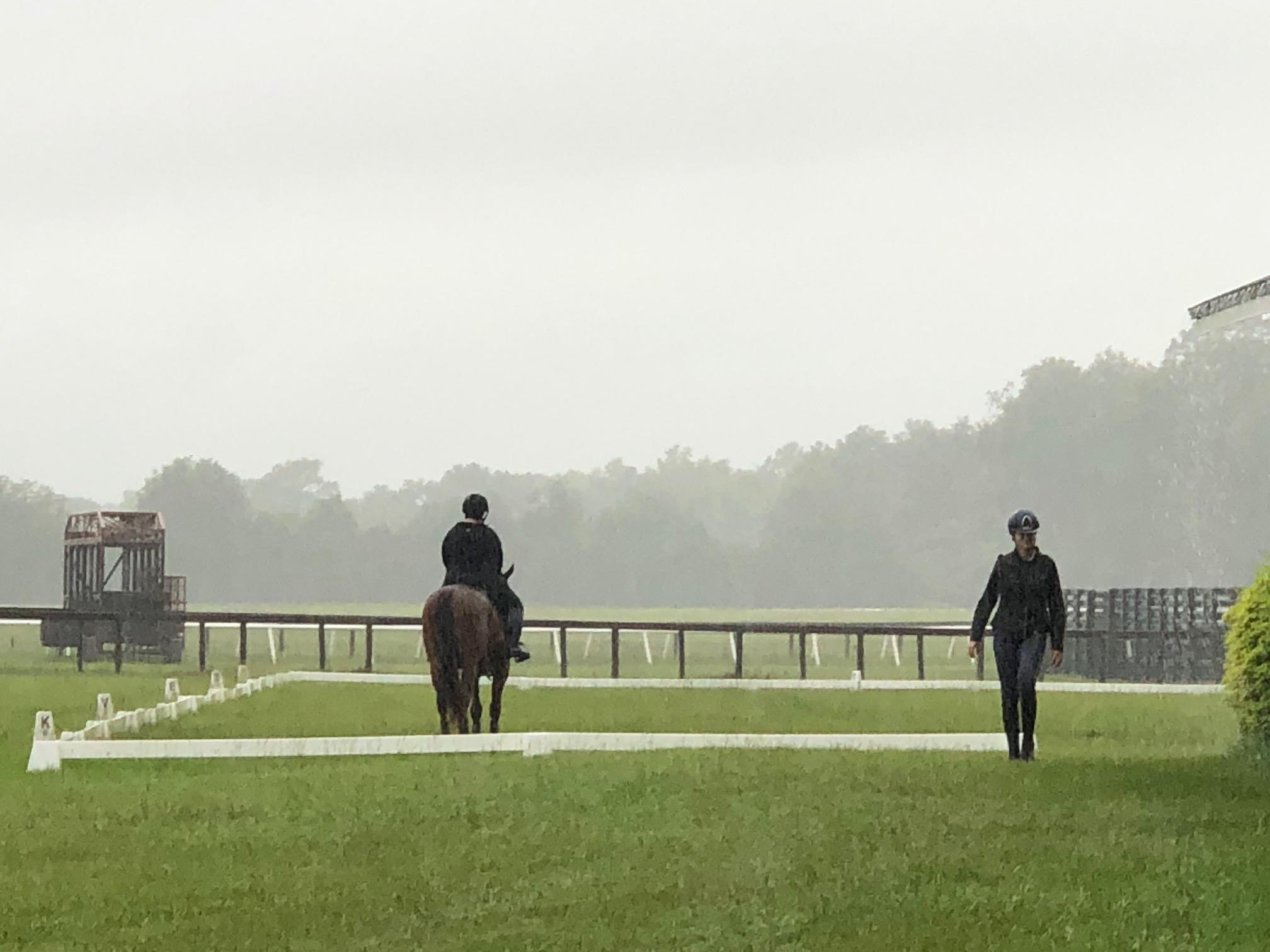 Me riding in the rain with Sinead coaching. Photo by Kristina Littlejohn. 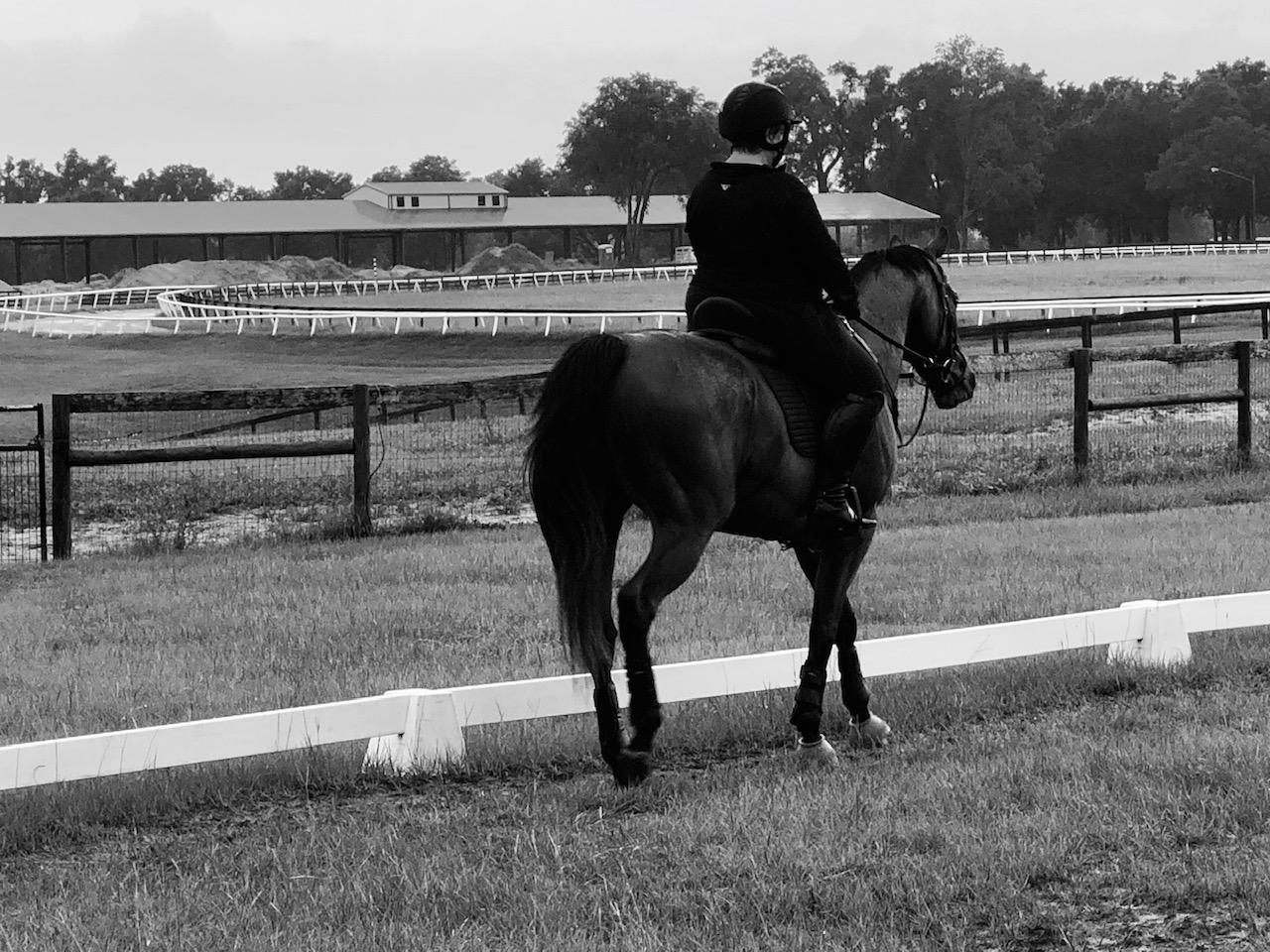 Me riding. Photo by Kristina Littlejohn.

I really understand now why he didn’t make it as a racehorse! His groundwork lessons with Tik were fabulous, and he quickly tried to turn one of the exercises on its head by figuring out that if he tapped the teeter-totter with his foot, he could ask for a cookie. I am glad he’s a fast learner, but I began to feel like I was being trained! 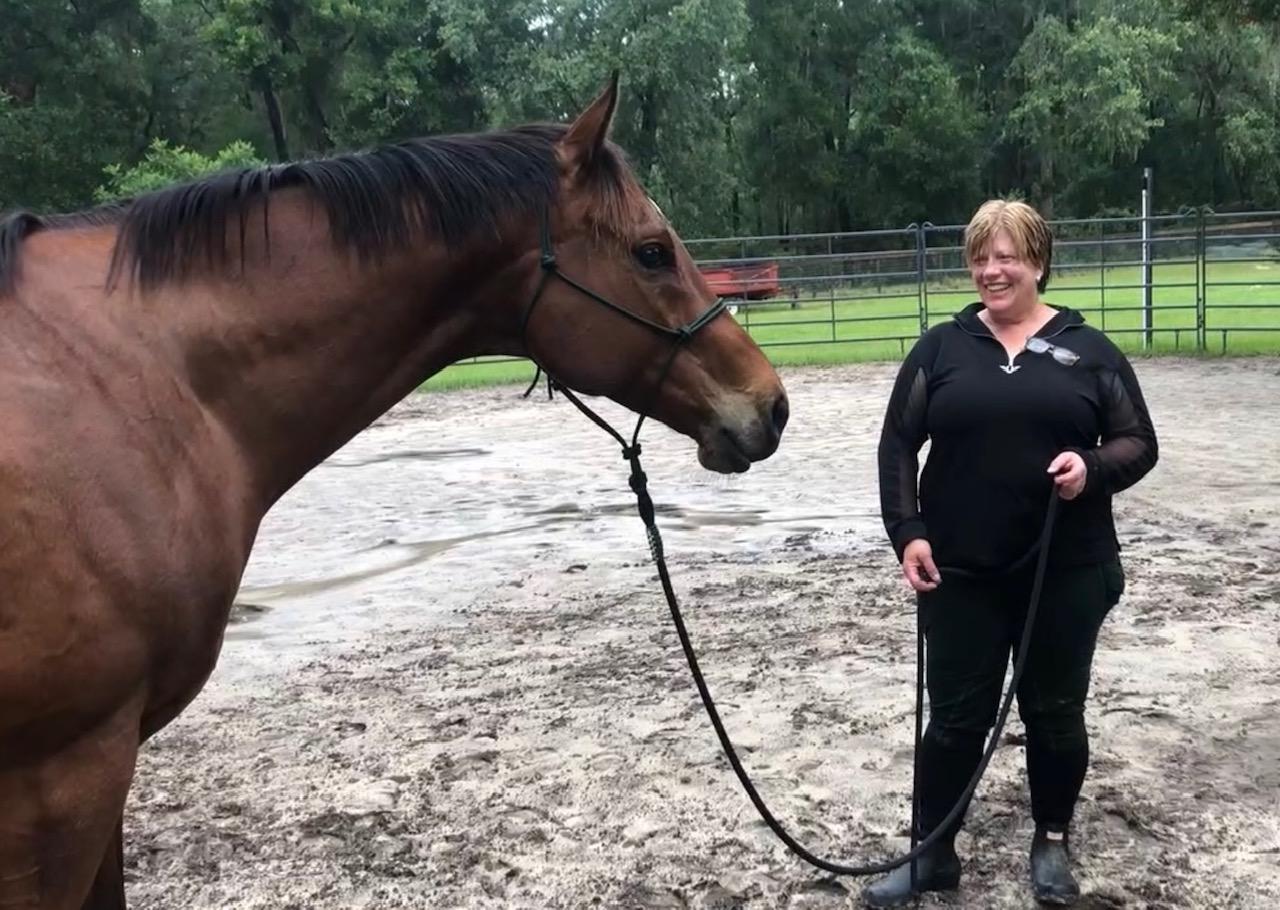 Me in the round pen with spider. Photo by Kristina Littlejohn. 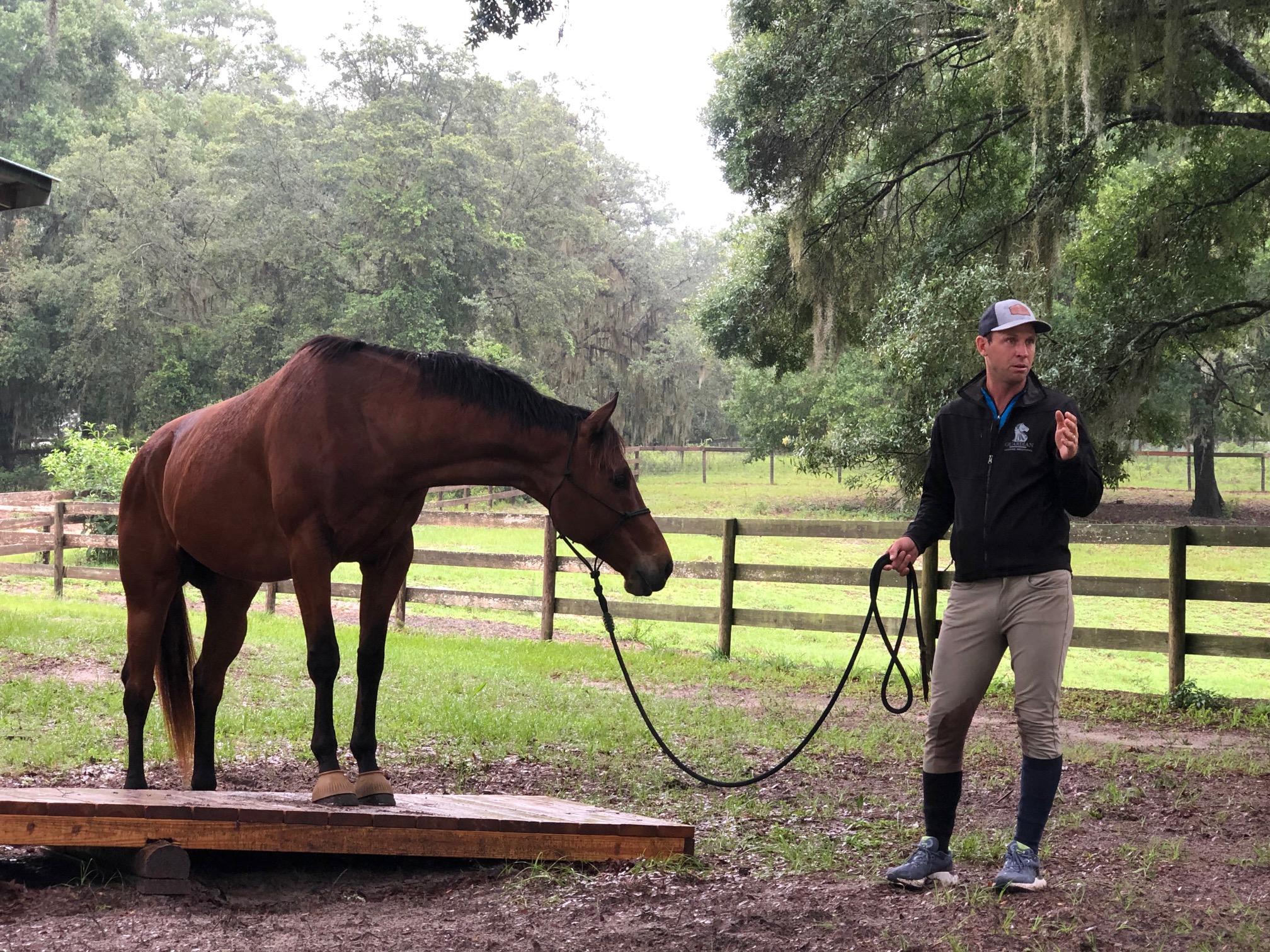 Spider with Tik on the teeter-totter. Photo by Libby Henderson. 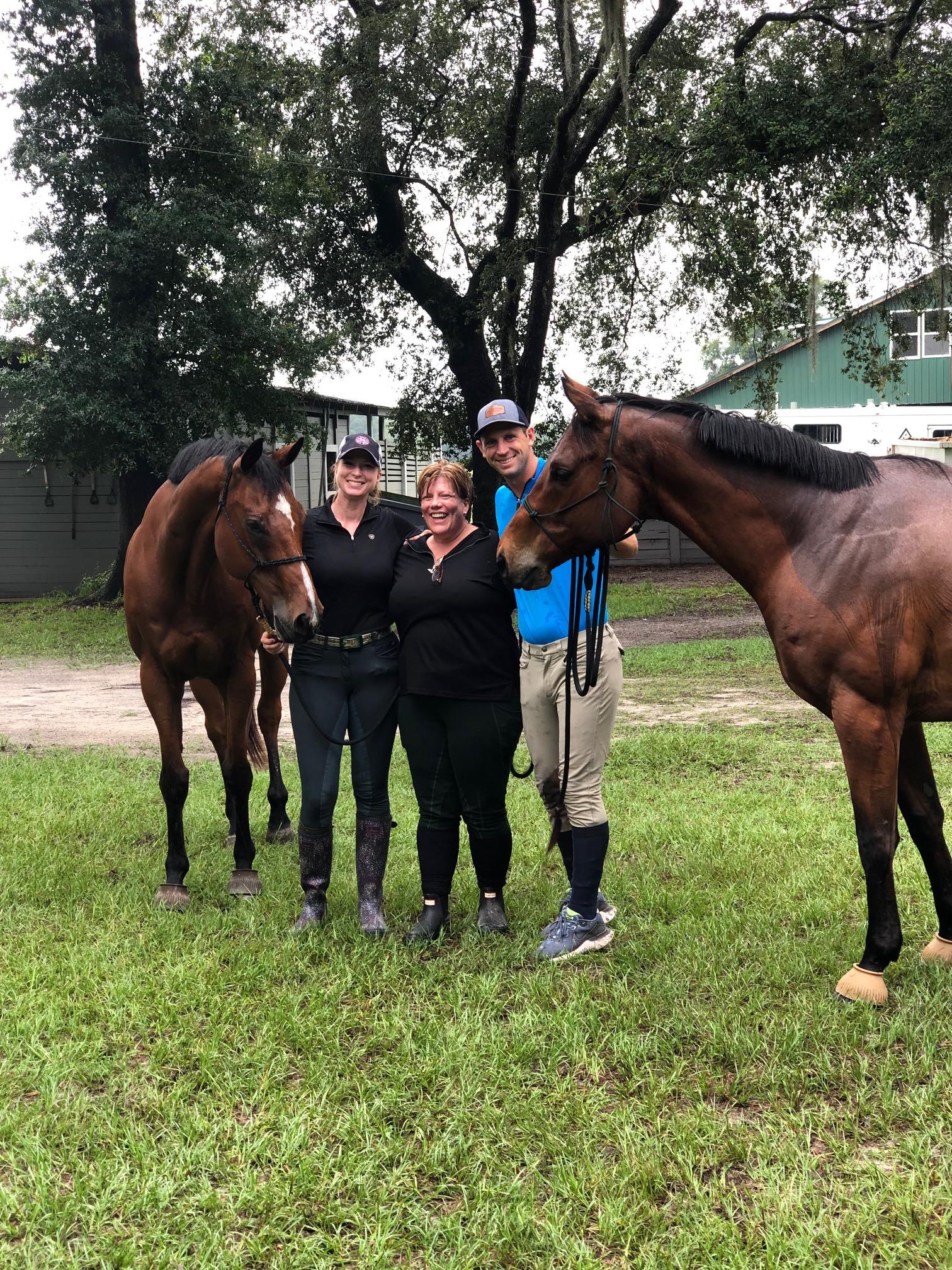 Kristina and me with Tik and Sammy and Spider. Photo courtesy of Libby Henderson.

Sunday afternoon, Kristina was going to do a cross country lesson at a nearby facility, and then our plan was to head home. My friend Kris, whose cottage we were staying in, came to watch, and we were happy to see the sun for the first time all weekend.

Until we didn’t. The outer band of Tropical Storm Cristobal hit Central Florida right after Kristina started to warm up. Looking at the radar, it became clear that we didn’t need to get on the highways to head home. The owners of the facility, Ronnie and Marisa DiMauro, insisted that we put the horses in their barn and stay the night. Kris opened her cottage back up for us, and Sinead made arrangements to teach Kristina the following morning on her day off, so she wouldn’t miss her cross country lesson. 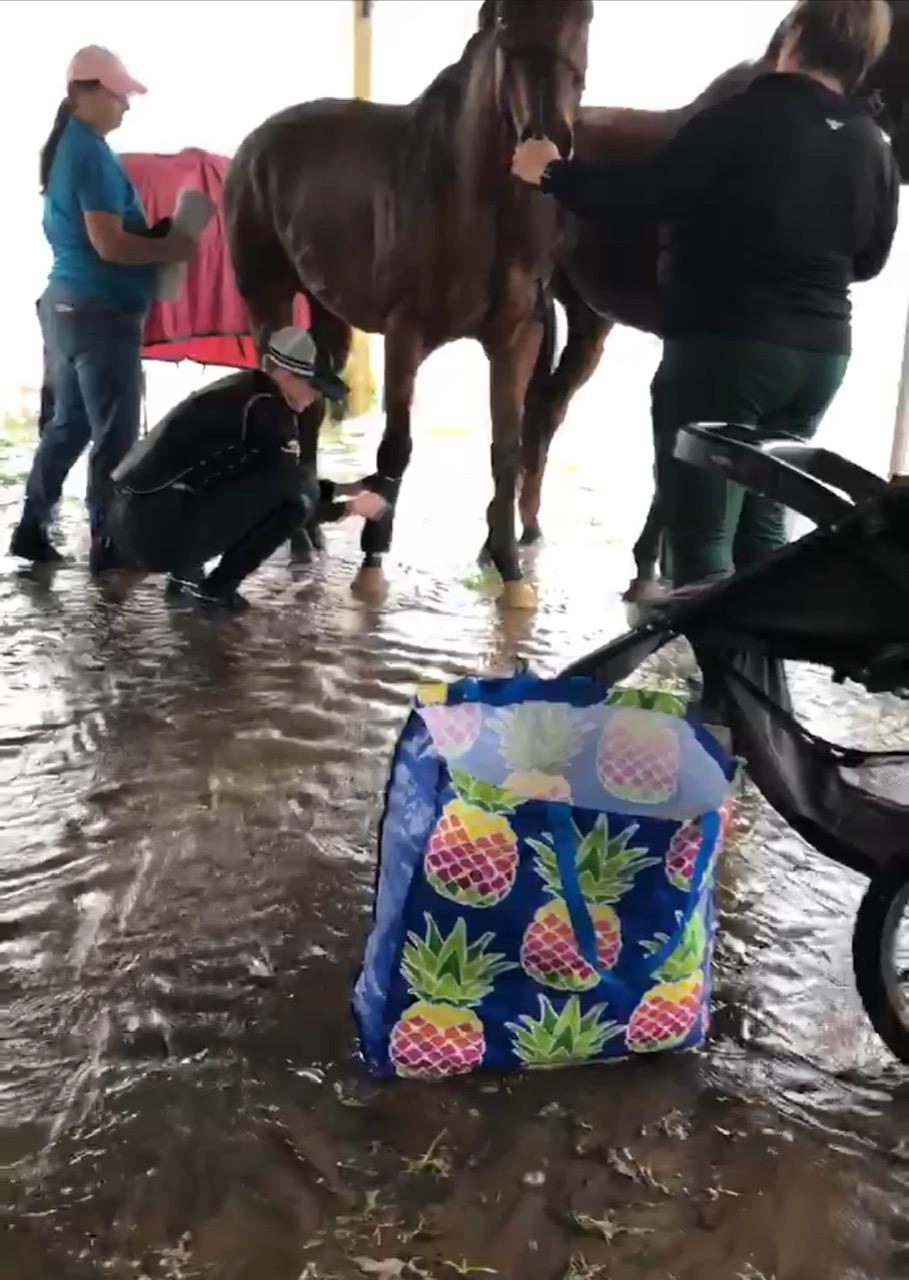 The boys under the shelter in the torrential downpour. Photo by Sinead Halpin Maynard. 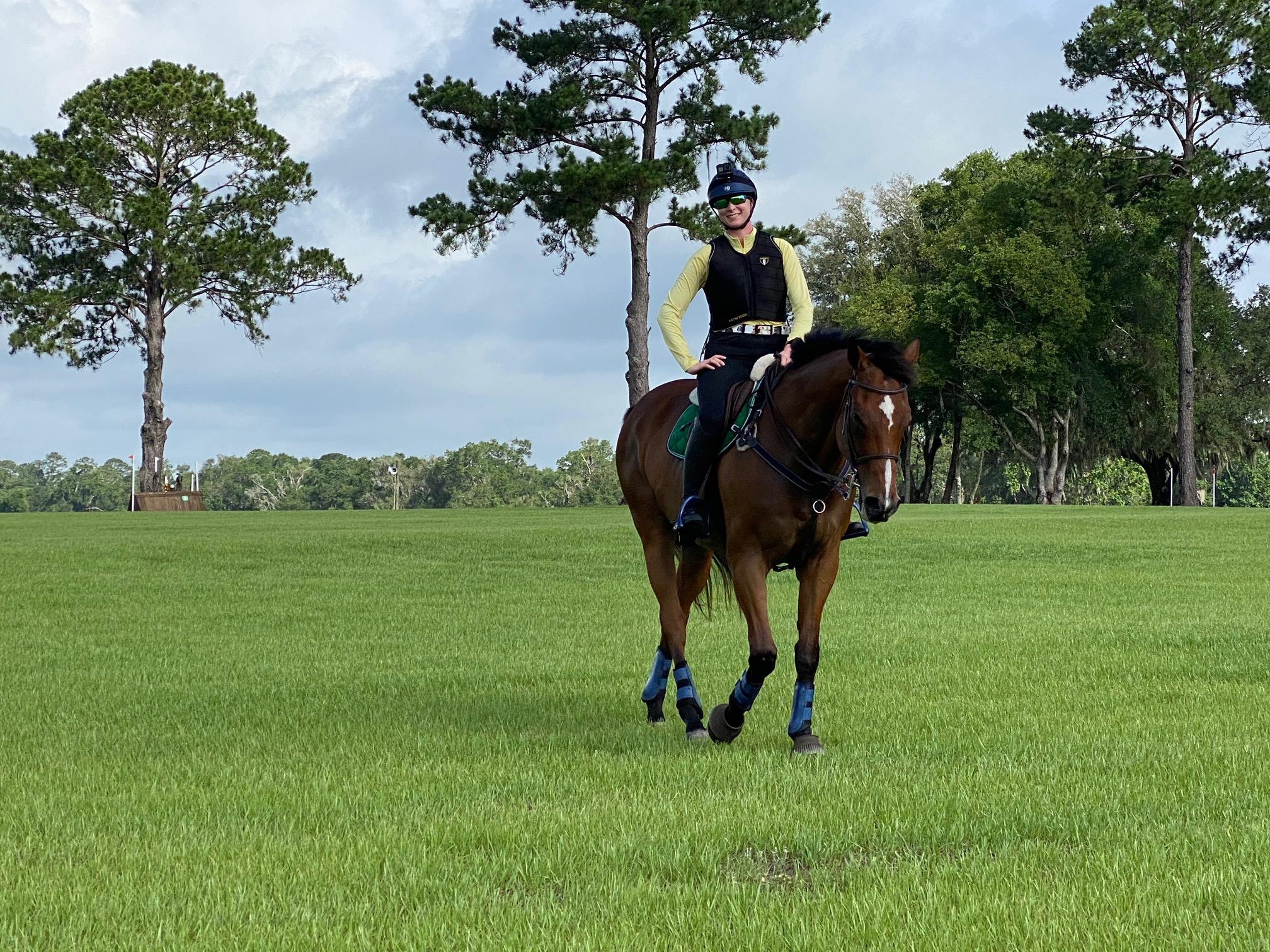 As I stood in the main barn at Majestic Oaks Ocala, and saw our soggy horses dry, standing comfortably under fans, as a whole group of people had surrounded them and helped us get set up, it was highlighted for me that the only reason we’d been able to do anything at all was because of the hospitality of those around us. Tik and Sinead opened their barn and made room in their schedule for us, not just for lessons, but to watch and learn how a professional eventing barn runs. Our friend Kris not only gave us a place to stay, but also came and watched, wrapped horses in a downpour, trained my horse to splash through puddles, put us up for an extra night and took us out to dinner somewhere dry. And the DiMauros stepped in and insisted we stay where it was safe and dry, opening their hearts and barn to look after us.

I’ve watched the Makeover since the beginning and I have always been impressed by what an achievement it is for the trainer that takes a horse through the process. As I travel the road to the Makeover myself, though, I’m seeing that it isn’t my achievement but truly a group effort, and that I’ll only make it there through the hospitality of those around me.