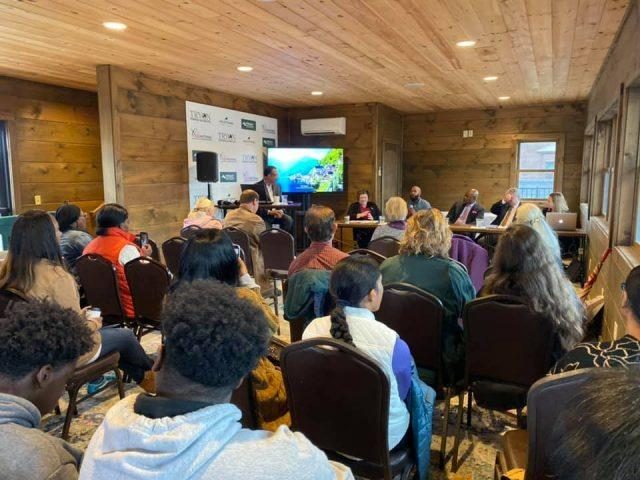 June 17, 2020DeAnn SloanLeslie WylieDiversity, Diversity in horseback ridingComments Off on A Pane of Glass: The Problem of Diversity in Equestrian Sport, Part I

The 2019 Tom Bass Seminar for Diversity in Equestrian Sport was the first time an industry-wide representation of experts had sat down together to address diversity head-on. Eventing Nation Editor Leslie Wylie shares her thoughts from being part of the panel. 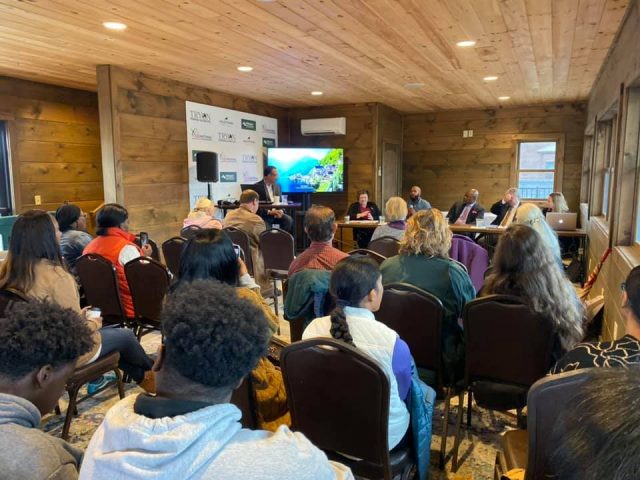 It’s a damp, slate-skied October day at Tryon International Equestrian Center. I’m sitting at a table with six other panelists, hailing from around the world, for the 2019 Tom Bass Seminar for Diversity in Equestrian Sport. We’re here to discuss an issue that has long troubled me, and many other otherwise die-hard devotees of our sport: its overwhelming whiteness.

I look out the window into the big jumper ring, flanked by Adirondack style buildings and a jumbotron. There’s a sushi restaurant and a steakhouse across the way, and a promenade of boutiques with designer sunglasses and custom shadbellies in their display windows. Glossy, six-figure horses canter into the arena, one after the next, to have a crack at the labyrinth of colored poles.

Seminar attendees file into the small wood-paneled room. A few curious locals have shown up; others have traveled great distances to be a part of this discussion. It’s an unprecedented moment: Incredulously, it’s the first time an industry-wide representation of experts have sat down together, in one room, to address diversity — or rather, the lack thereof — head-on. And it’s long overdue.

I’m no expert, but I do have a platform and a voice that isn’t afraid to ask hard questions. I’m one of few journalists who have dared poke a stick at the subject of diversity, which is the low-bar reasoning behind my invitation here today. As one of three non-black panelists, I can’t speak to the experience of being the minority in a majority white sport. But what I can do is listen. I can show up.

The other panelists include moderator Melvin H. Cox, Managing Director of SportsQuest International, LLC and a Lecturer at the University of California, Santa Cruz; Julian Hyde, a show jumper representing the Equestrian Federation of Jamaica; Stanford Moore, Publisher of Black Reins Magazine; Julian Seaman, Media Director of the Badminton Horse Trials; and Hillary Tucker, Equine Services Specialist & Territory Sales Manager at McCauley Brothers, an Alltech company. Together, our varying experiences cover a lot of ground. One thing we all have in common, Julian Seaman notes, is that none of us were born into the horse world. We charted our own courses to where we stand today, upstream or downstream, and more likely a mixture of both.

After some polite introductions, we dive right into heated discussion about the “problem” — which is more like an everlasting gobstopper of layers upon layers of problems, plural. (I dig into a few of them here: “Where Is the Diversity in Eventing?“)

On the surface there is lack of access, lack of inclusiveness, lack of resources, lack of representation, lack of interest. Underpinning that are vestigial socio-economic barriers, i.e. not everyone is in a financial position to invest in the training, equipment and competition costs required to participate, much less excel, in certain sports — particularly equipment sports like archery, canoe/kayak, cycling, rowing, modern pentathlon, sailing, shooting and triathlon (which are, not surprisingly, the least diverse Olympic sports). And yet another frustratingly impenetrable layer below is rooted in a deeper structural racism of who has access to what, entrenched in years<decades<centuries of racial inequality.

It’s a lot to unravel, much less dismantle. I understand systemic racism logically, but it’s a whole different thing to come eye to eye with it, in person. Enter David Staley, who arrives at the seminar with a crew of black youth.

David raises his hand between panel questions and stands up, his frame tall, his brow furrowed. “I was afraid to speak, because I was afraid I would get emotional,” he begins. He says he is from the non-profit organization Unity in the Community of the Foothills, located right down the road from TIEC, dedicated to a mission statement of “empowering people to recognize their potential and use the power that exists within each of them to reach their potential.”

Outside the window, it looks like rain. A snow-white horse is gliding around the course, its rider a picture of singular focus, one jump to the next. They’ll leave the ring, and the rider will hand his mount off to a groom, who statistically speaking is of Hispanic or Latinx ethnicity. And then another horse will canter into the ring, take its turn, and get handed off to a groom. The cycle continues.

“I have tried to get these kids access to a horse, up close and personal. I could not do that until I met Mr. Cox,” David continues. “I didn’t know how to … there was a missing link to the equestrian world, even though we were close. You’ve heard the phrase, so close yet so far away. That’s what we’re dealing with.”

So close yet so far away. I glance out the window again. Another horse, another rider. Depending on your perspective, a pane of glass can feel shatterable or as wide and gaping as an ocean.

TIEC, to its credit, has taken community involvement seriously. The venue’s popular Saturday Night Lights series is free and open to the public, attracting a diverse crowd of spectators during its May-October season. There are carousel rides, fire twirlers, acrobats, magicians, mechanical bull riding, sand-castle building and craft beer, all set against the backdrop of a Grand Prix show jumping competition. It doesn’t get an underserved black kid on a horse, or even anywhere near a horse, but it’s a start. As I said, the bar is low.

Storms are on their way in, so tonight’s Grand Prix has been bumped up to the afternoon. Outside, the jump crew is hurriedly raising fences to dizzying heights. Riders walk their courses, counting strides and memorizing lines, focused on the daunting test ahead. They aren’t paying attention to the discussion in this wood-paneled room. Maybe they don’t realize it exists. Maybe they don’t think it concerns them. After all, when it comes to matters like racial inequality, it’s easier — certainly, more comfortable — to just stay in your lane. Or maybe they just don’t care.

There are hundreds of riders on the TIEC grounds this weekend, taking their turns in the ring. Despite being well publicized, and despite being the first meeting of its kind in our sport’s history, and despite being an issue upon which the fate of our sport as an Olympic discipline arguably hinges, not one competing rider is in attendance for the 2019 Tom Bass Seminar.

David himself jokes that he had to “drag” some of his Unity kids to the seminar. Not all of them are into horses. Some are. Some might be, but they don’t know it yet because they haven’t ever been in the physical presence of a horse before. He’s “dragging them” to two more meetings out in the community today. “We made an effort to get these kids out here so they could, and so I could, hear it. I don’t know if they took it in and they heard it, but at least they were here.”

At least they were here.

“We need a dialogue,” David says. “I think you need to start right here, and work your way out.”

You can listen to a complete recording of the 2019 Tom Bass Seminar for Diversity in Equestrian Sport here. 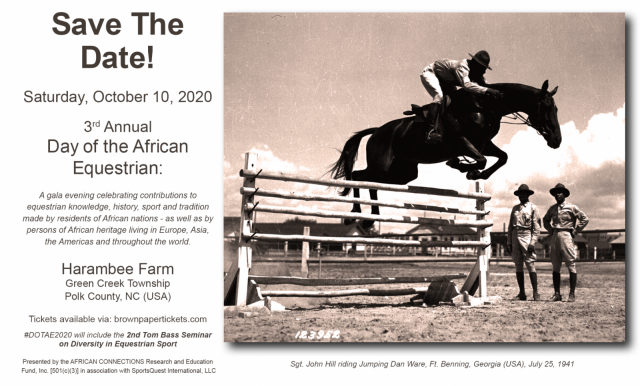